The Burden of Excess 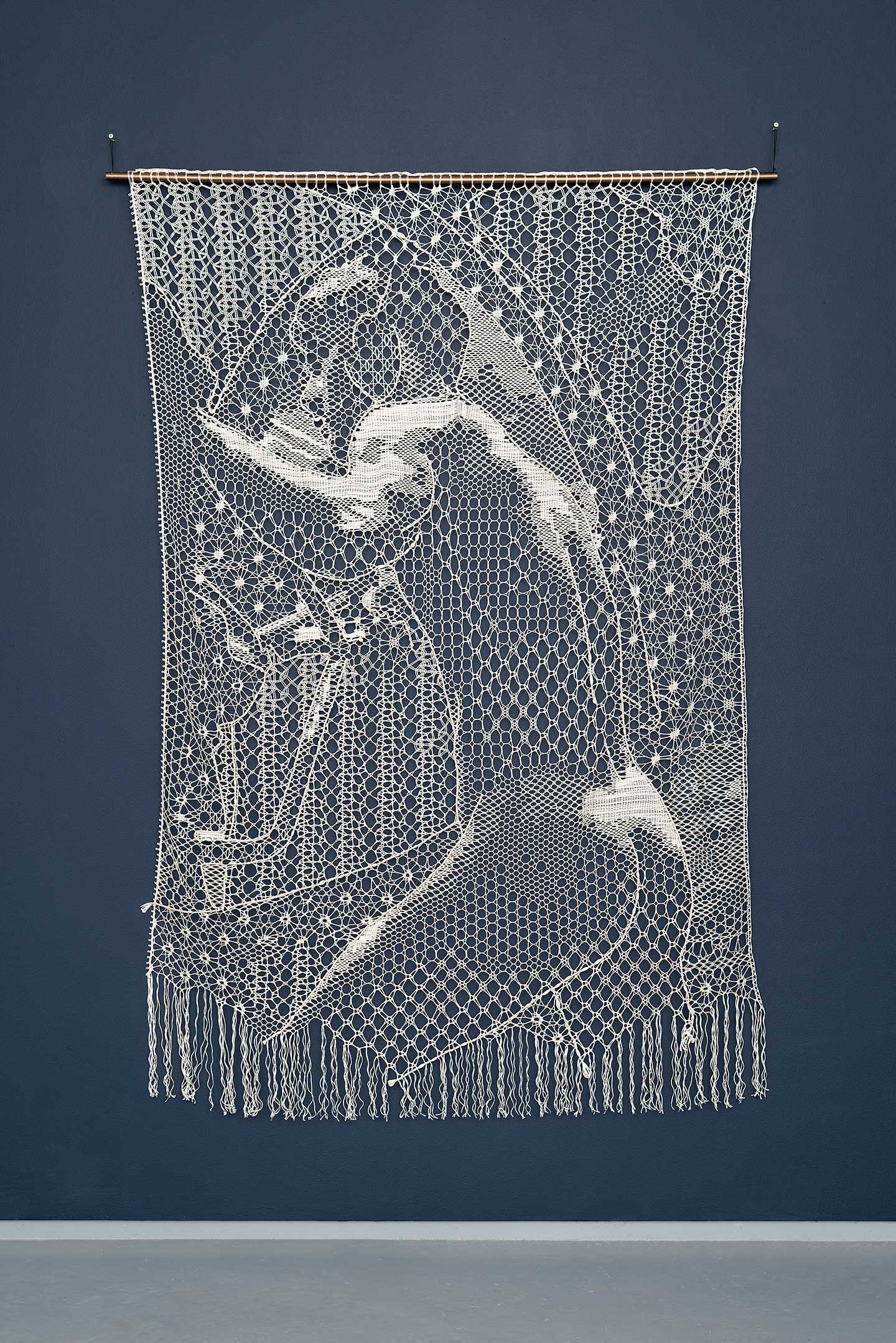 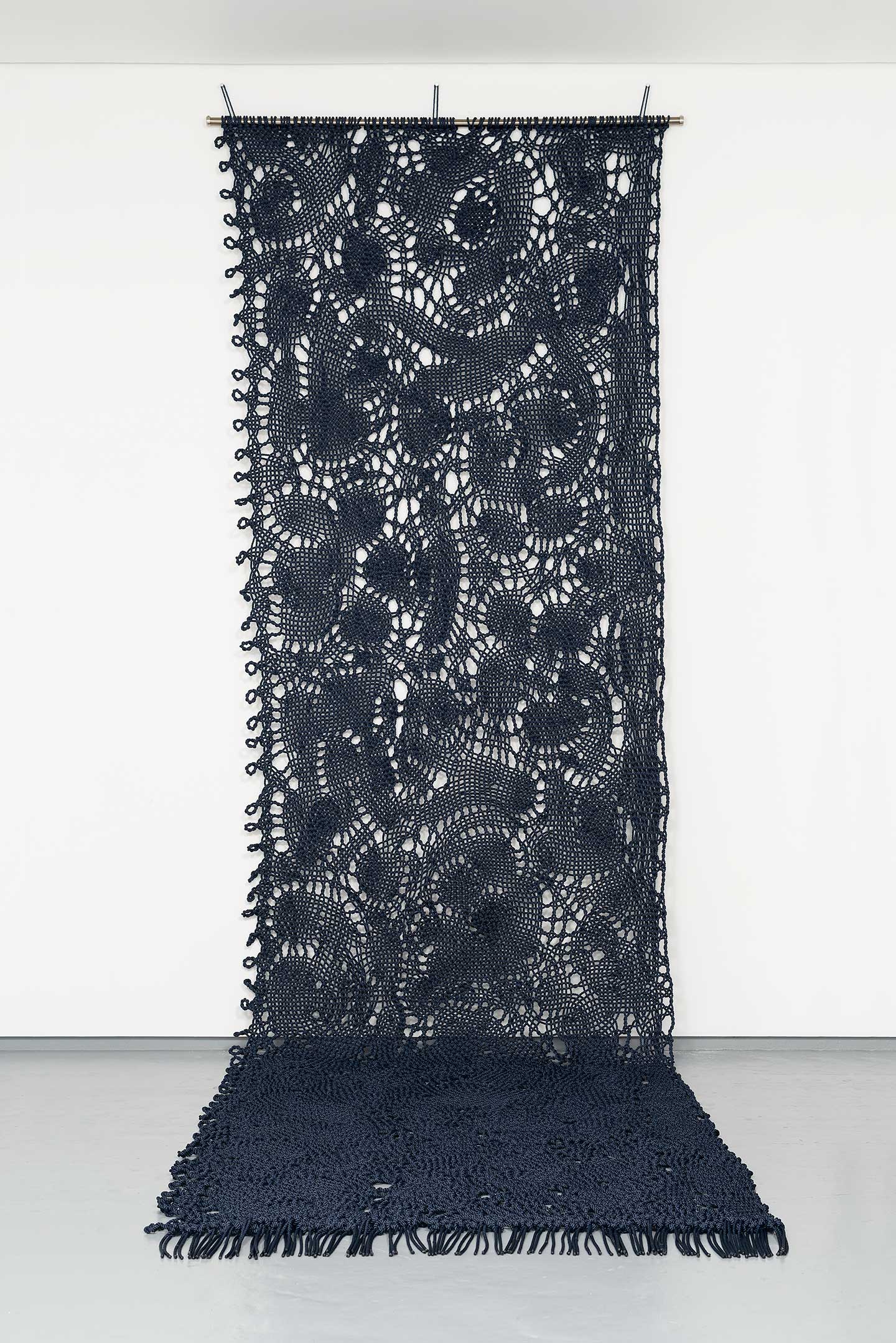 Sampler[]3x4 Or The Burden of Excess 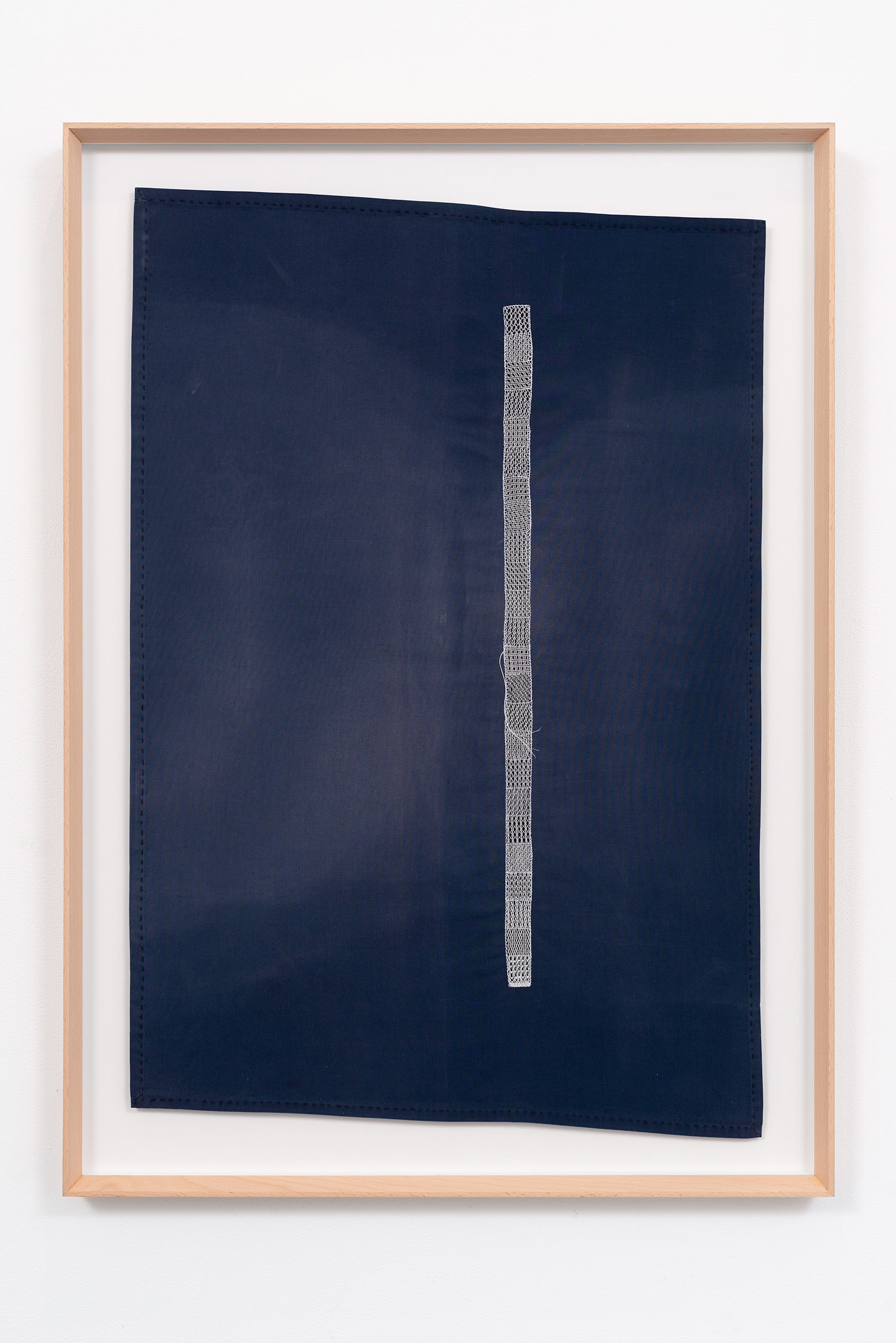 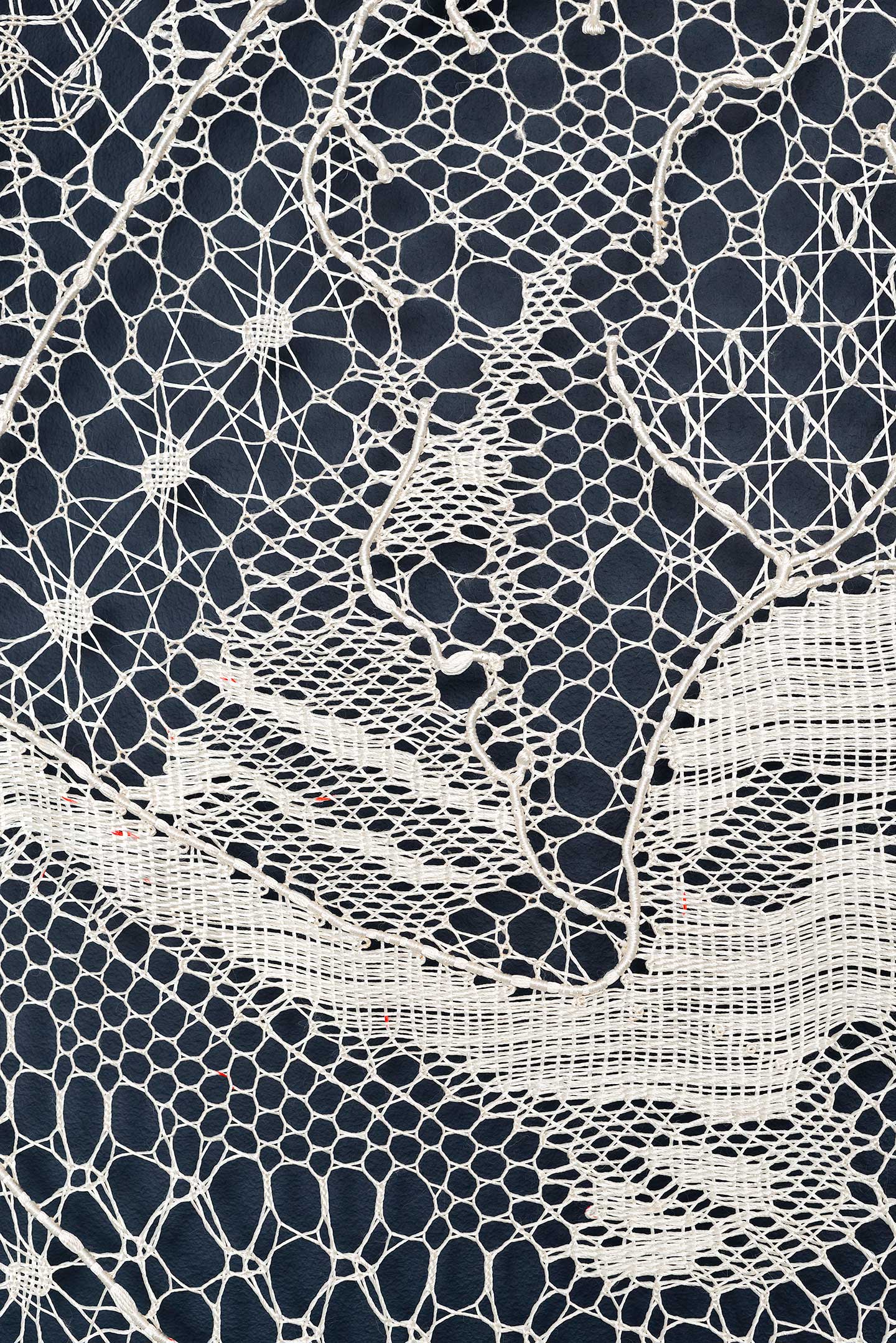 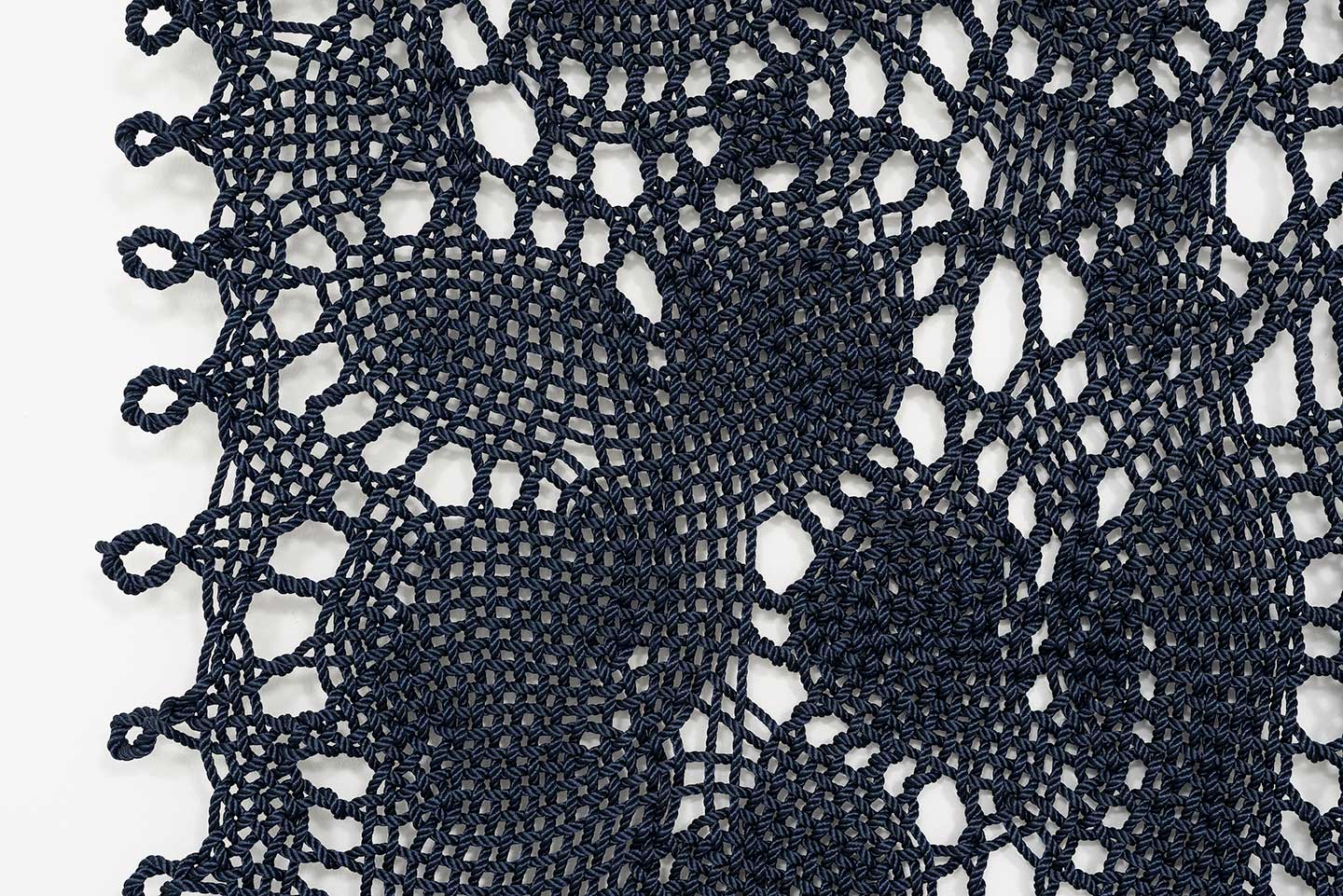 Sampler[]3x4 Or The Burden of Excess (Detail) 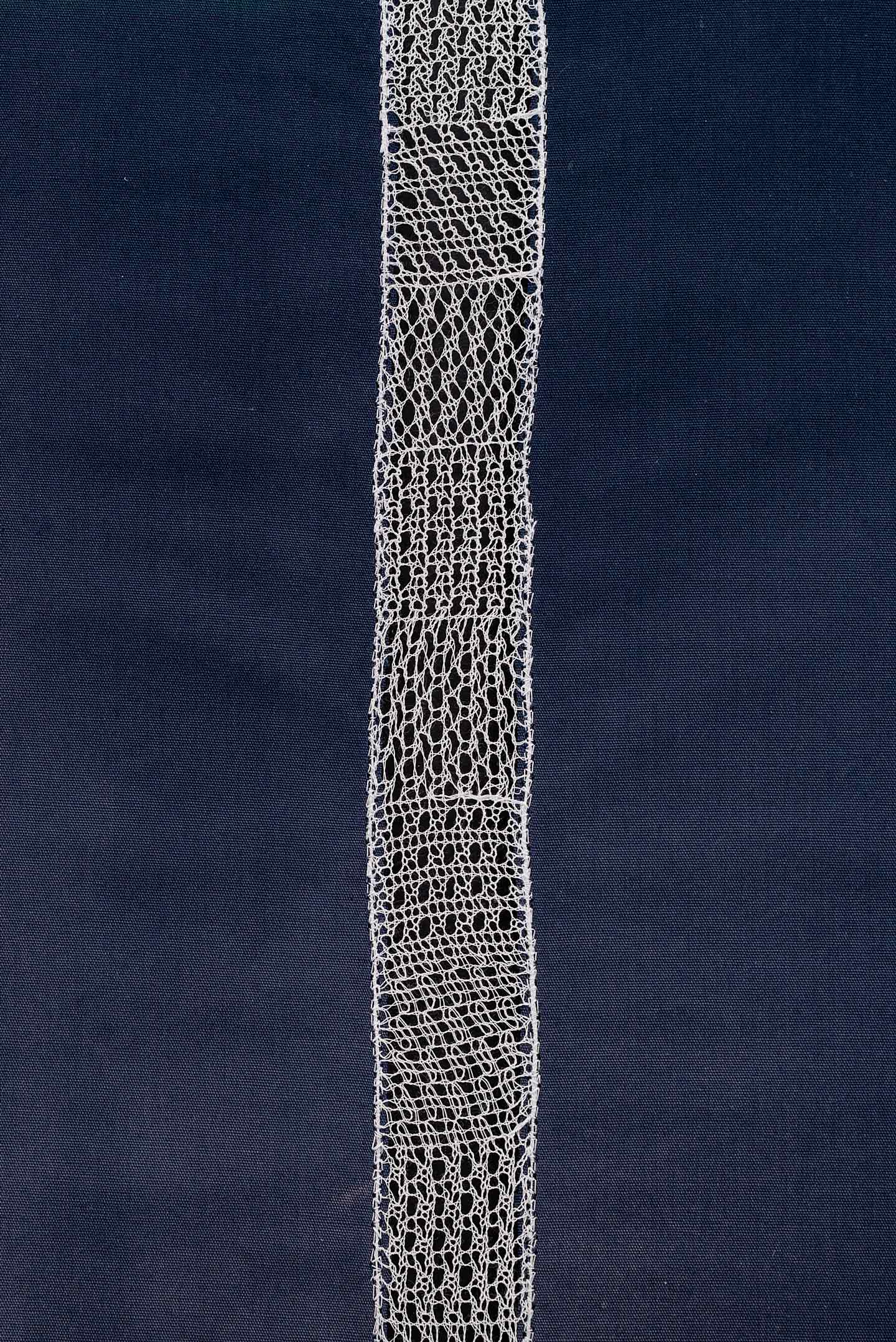 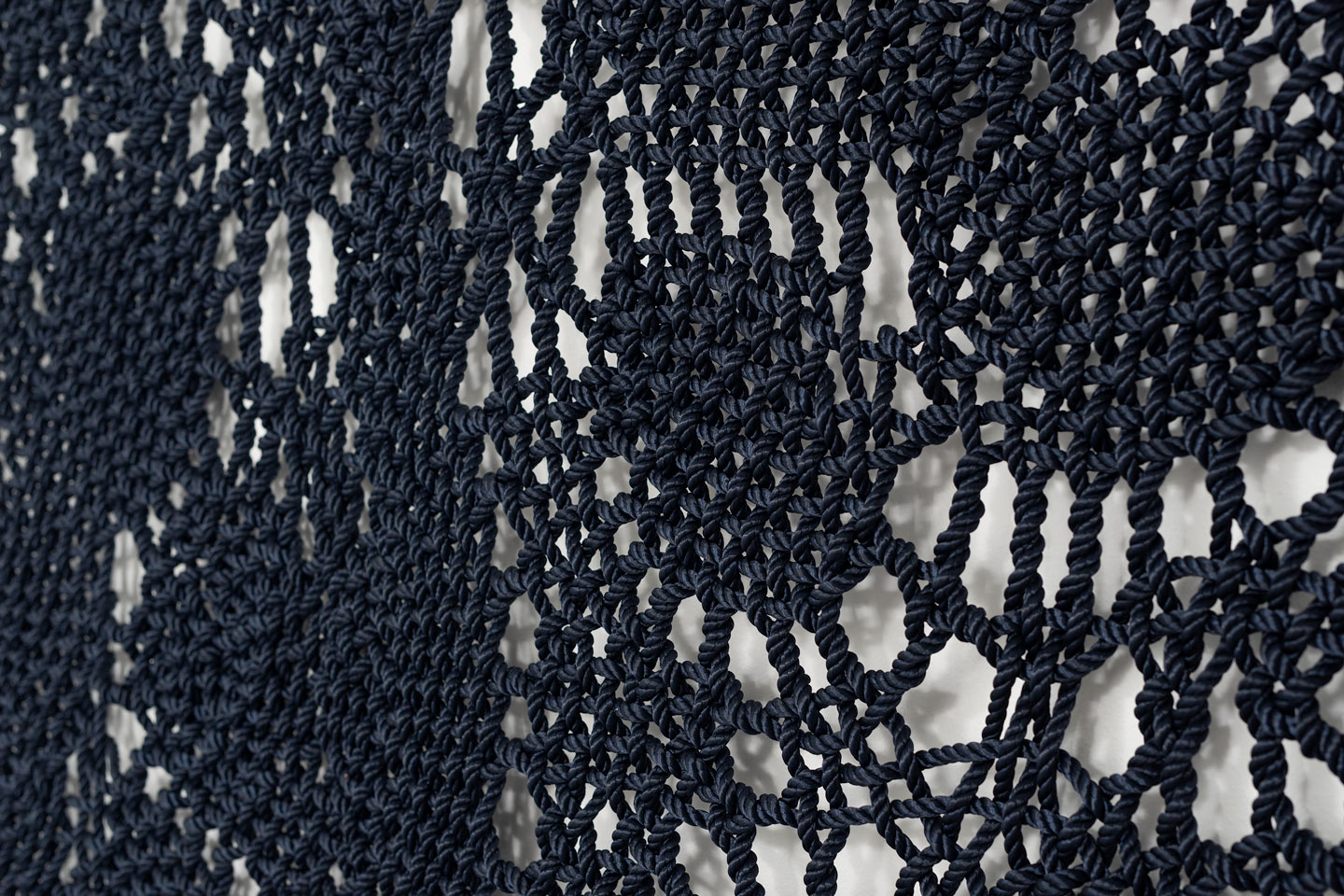 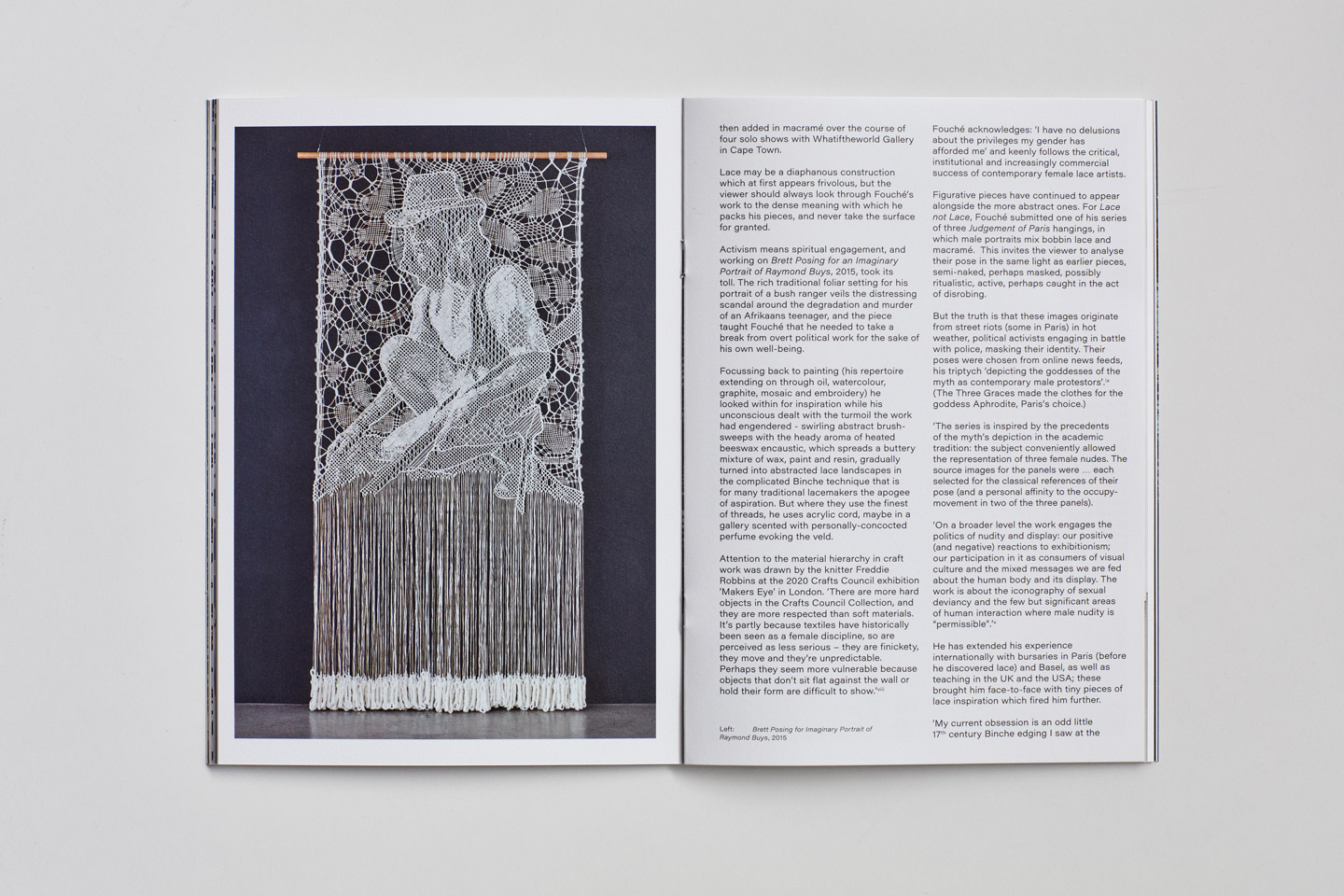 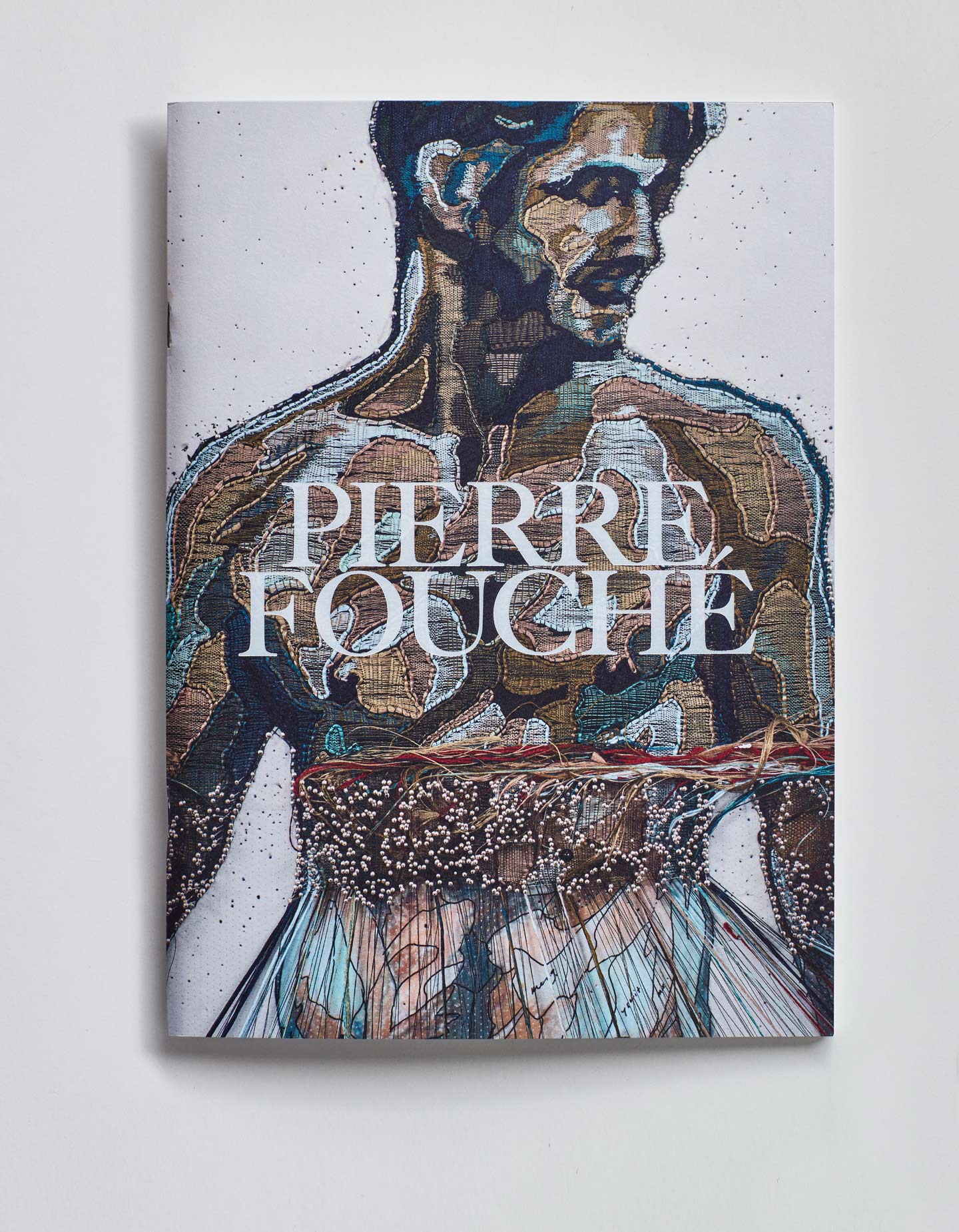 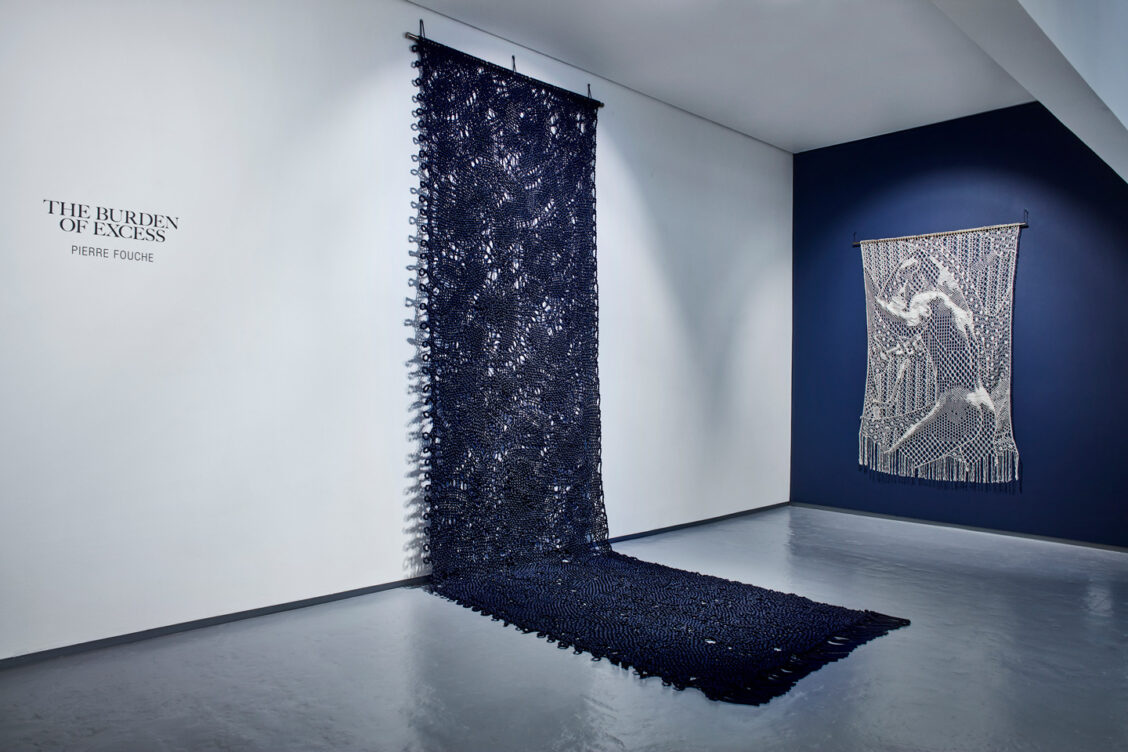 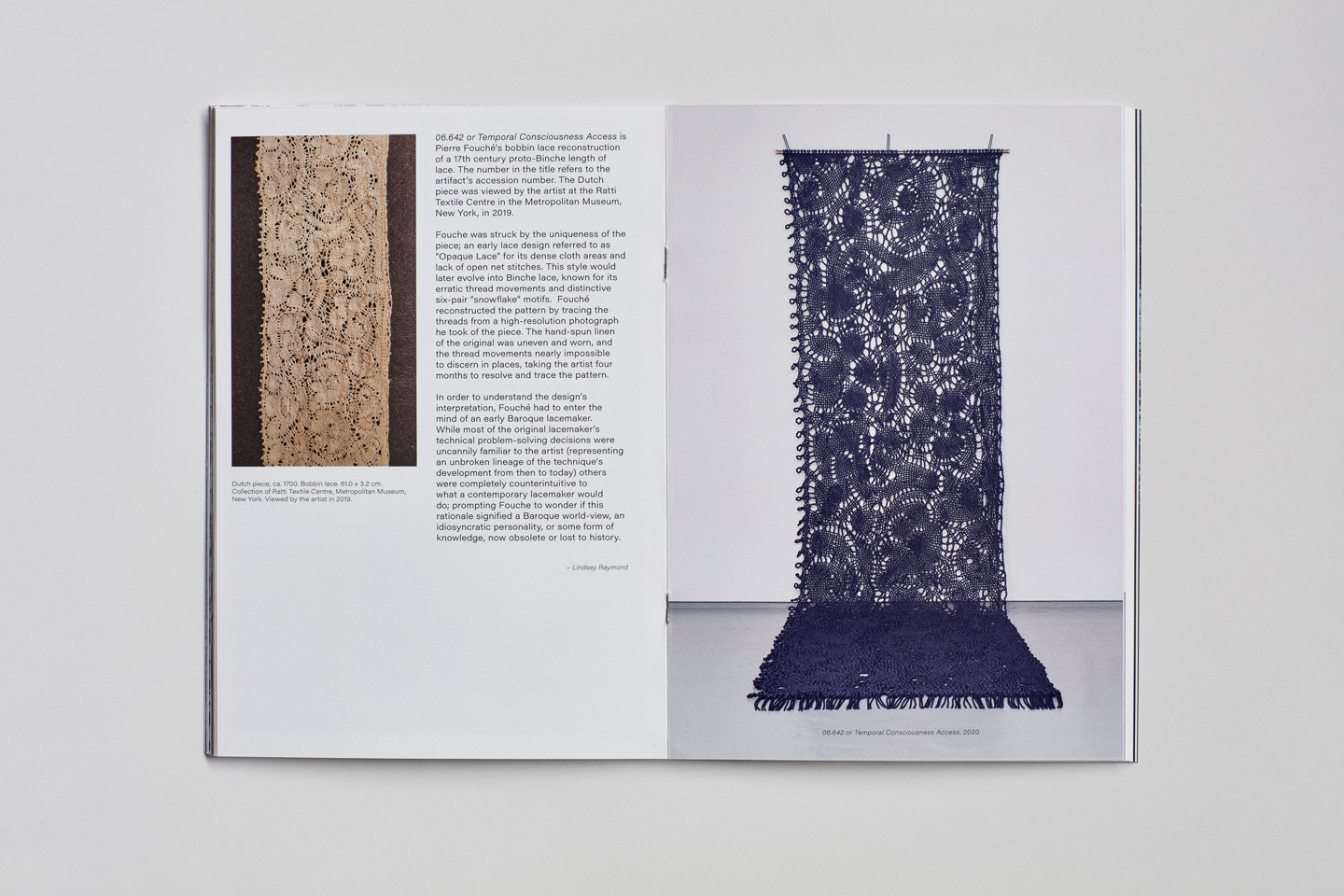 WHATIFTHEWORLD is pleased to present Pierre Fouché’s The Burden of Excess, originally conceived as a dual presentation with Mia Chaplin for Artissima Art Fair, Italy. Fouché’s needlework series reveals the artist’s complex combination of sources and materials, and his compelling desire to preserve history, the lineage of knowledge, and its evolution through time.

994.77 or Lebenslänglichen Explosionsglück (2020) is a bobbin lace work crafted from World War II parachute silk cord gifted to Pierre Fouché. The medium’s provenance was authenticated by a crumpled piece of newspaper dating from the period, used as the core of a ball of 2m length cords. Lovingly sorted and preserved by generations of women, this thread holds the spotted residue of bright orange length markers, possibly dyed with mercurochrome. With too many to edit out in the thread selection and too few to incorporate in any meaningful way, these blemishes add nuances of stochasticism to the greater purpose of the work: an invitation to contemplate what humanity values enough to preserve.

The figure rendered is a bobbin lace interpretation of an iconic WWII photograph taken in 1944 by Horace Bristol; currently in the collection of the Brooklyn Museum. The photograph is not only the subject of historical relevance, but also documented a staggeringly beautiful young man. Its uncanny contemporary feel highlights the absurdity of enlisting young men and sending them off to kill one another under the guise of patriotism. The artwork title is derived from two German words extracted from the found piece of newspaper by the artist. Combined, the words read: “life-long explosive happiness”.

In Sampler[]3×4 – or the Burden of Excess (2020), Fouché interprets a set of thread geometries discovered by an algorithm written by Canadian computer scientist, mathematician, and lacemaker, Veronika Irvine. This algorithm computes the variety of ways threads can intersect based on the rules of bobbin lace grounds. In Irvine’s article, Developing a Mathematical Model for Bobbin Lace, published in the Journal of Mathematics and the Arts in 2014, she posited a mathematical representation of the lace craft with potential applications well beyond textiles, patterns, and adornment.

Fouché’s sample shows 23 of the millions of new grounds already discovered by Irvine’s algorithm, and reflects his effort to translate these into bobbin lace designs; which still require a lacemaker’s interpretation. The grounds in his sampler are all based on a 3×4 tile of possible thread intersections. The possibility of multiple outcomes is the ‘burden of excess’ of this endeavour, as any geometric mesh possible to be made in lace can have hundreds of variations based on what stitches and combinations of stitches are used, and the way the thread’s movements are interpreted with the inclusion or not of support pins at each intersection.

06.642 or Temporal Consciousness Access is Fouché’s macramé reconstruction of a 17th century proto Binche length of lace. The number in the title refers to the artifact’s accession number. The Dutch piece was viewed by the artist at the Ratti Textile Centre in the Metropolitan Museum, New York, in 2019. Fouche was struck by the uniqueness of the piece; an early lace design referred to as “Opaque Lace” for its dense cloth areas and lack of open net stitches. This style would later evolve into Binche lace, known for its erratic thread movements and distinctive six-pair “snowflake” motifs.

Fouché reconstructed the pattern by tracing the threads from a high-resolution photograph he took of the piece. The hand-spun linen of the original was uneven and worn, and the thread movements nearly impossible to discern in places, taking the artist four months to resolve and trace the pattern. In order to understand the design’s interpretation, Fouché had to enter the mind of a medieval lacemaker. While most of the original lacemaker’s technical problem-solving decisions were uncannily familiar to the artist (representing an unbroken lineage of the technique’s development from then to today) others were completely counterintuitive to what a contemporary lacemaker would do; prompting Fouche to wonder if this rationale signified a medieval world-view, an idiosyncratic personality, or some form of knowledge, now obsolete or lost to history.

Pierre Fouché (b. 1977, Pretoria) introduces himself as a lacemaker. This designation highlights his interest in the techniques, materials, histories, and social relevance of textiles. His respect for technique, tradition, and innovation have earned Fouché his place within the craft establishment as an internationally respected practitioner and teacher of contemporary bobbin lace. His penchant for arcane media and aesthetics, has led his practice to include macramé, drawn thread embroidery, encaustic painting, and pinhole photography, as well as traditional painting, drawing and printmaking.

Thematically, his work focusses on portraiture and the gaze, photography and representation, appropriation and web-media cultures, as well as some forays into overt queer politics. Often informed by world art history, his desire to understand the machinery of contemporary visual cultures tends toward the Romantic. His consistent marriage of iconography with craftsmanship also contributes to this reading.

Fouché achieved his MA in Fine Arts from the University of Stellenbosch in 2006. In 2018 he was the featured artist of the Andorran city of Escaldes- Engordany’s 12th Textile and Glass Symposium. Recently, he hosted his 5th solo exhibition  The Little Binche Peacock and Other Utopian Dreams with WHATIFTHEWORLD .Notable group exhibitions include Lace/not lace at the Hunterdon Art Museum in Clinton, New Jersey; Crafted: Objects in flux at the Boston Museum of Fine Arts (2018), Women’s work at the Iziko South African National Gallery (2016), as well as the touring exhibition, Queer Threads: Crafting Identity and Community,  first exhibited at the Leslie + Lohman Museum of Gay and Lesbian Art, New York (2015). His work is represented in the public collections of the Iziko South African National Gallery and the Artphilein Foundation, Switzerland.