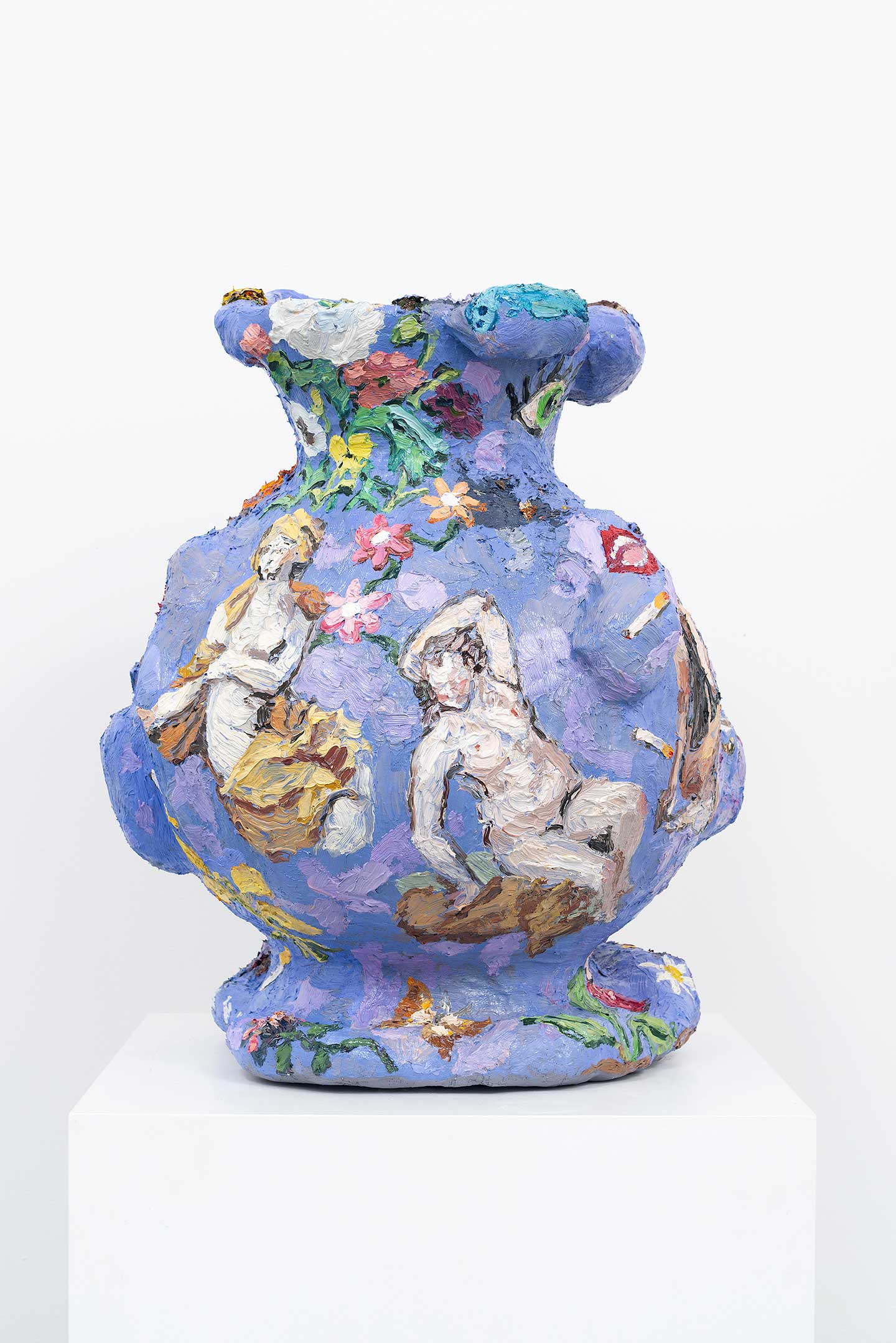 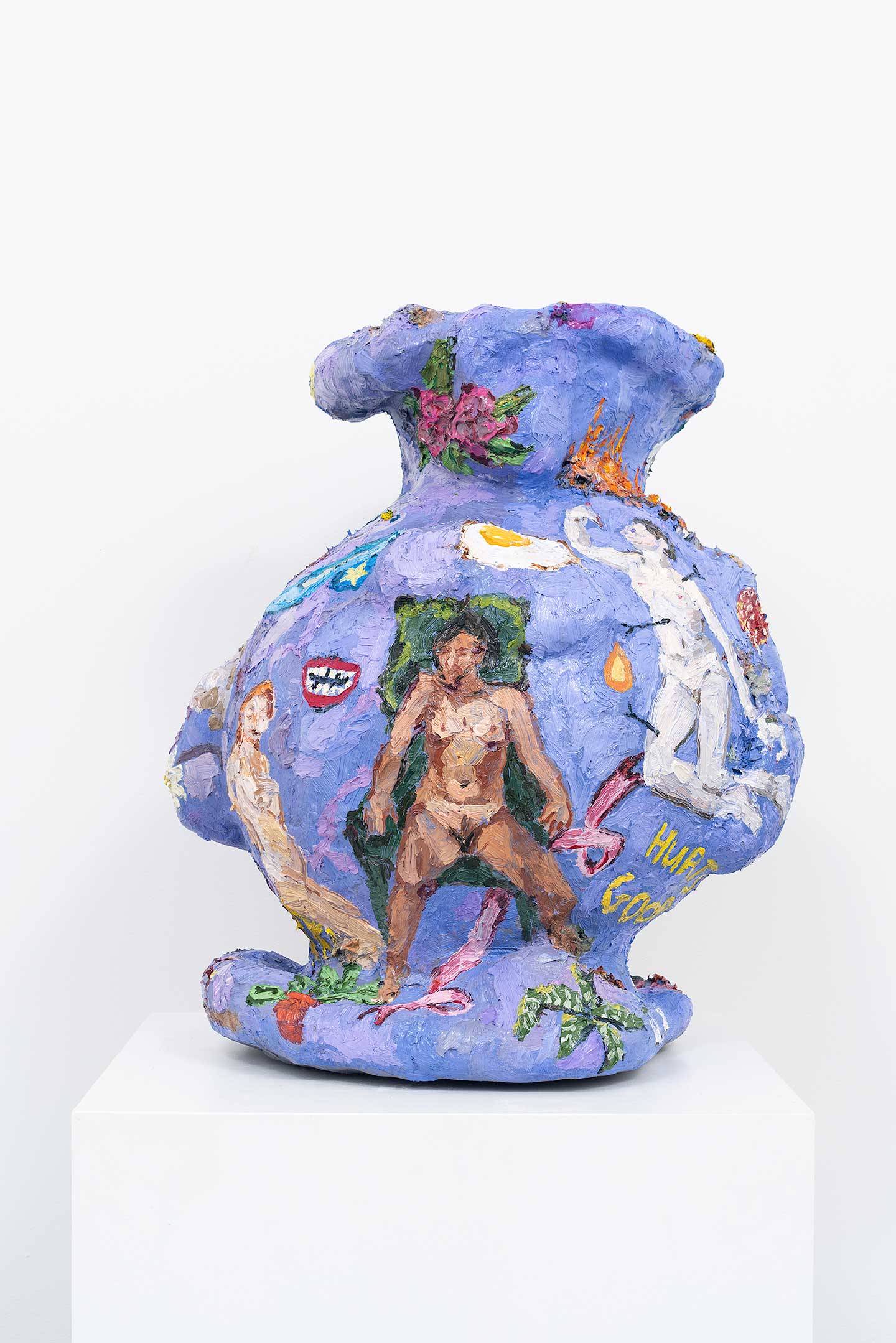 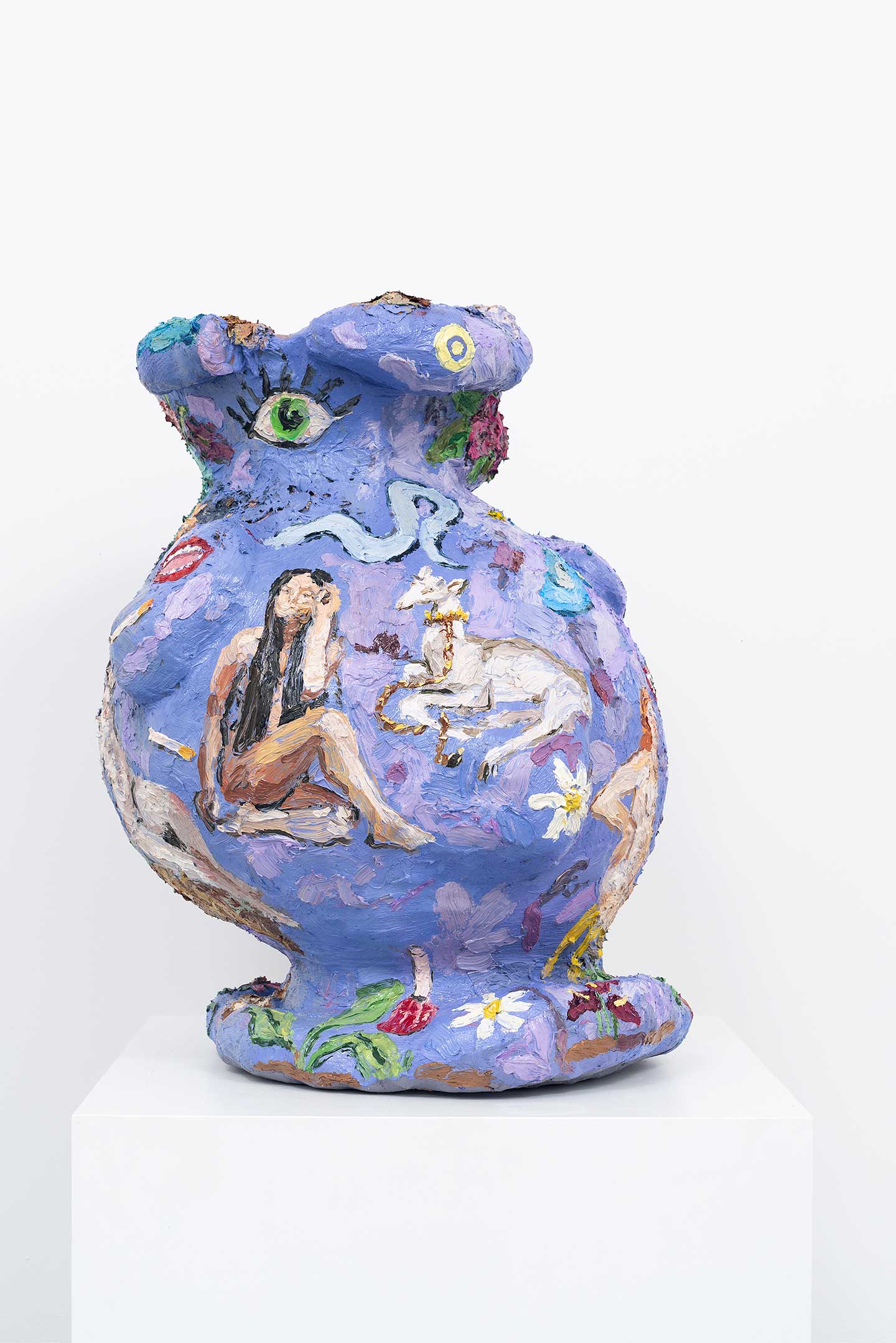 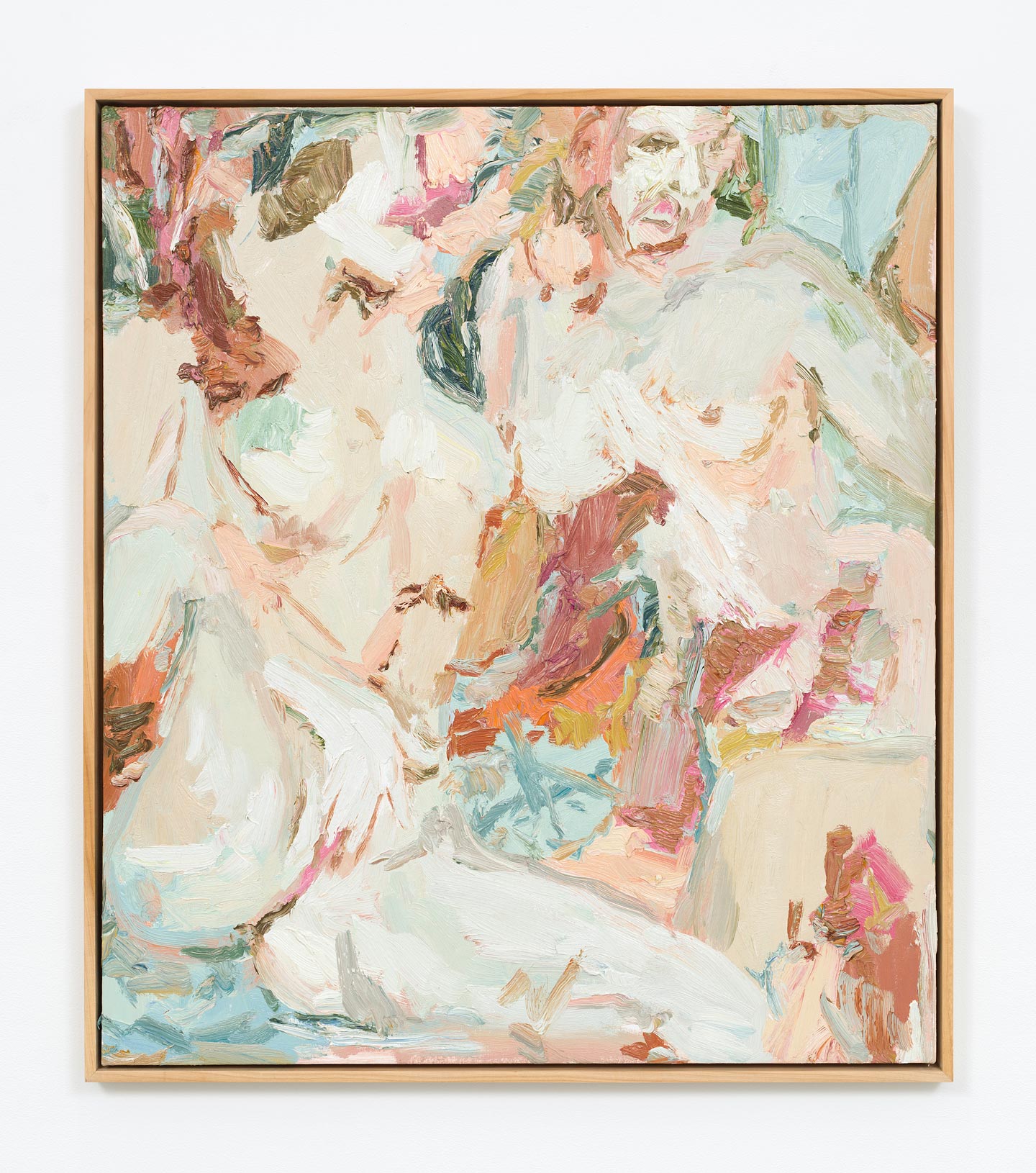 A Blade To Cut The Bullshit 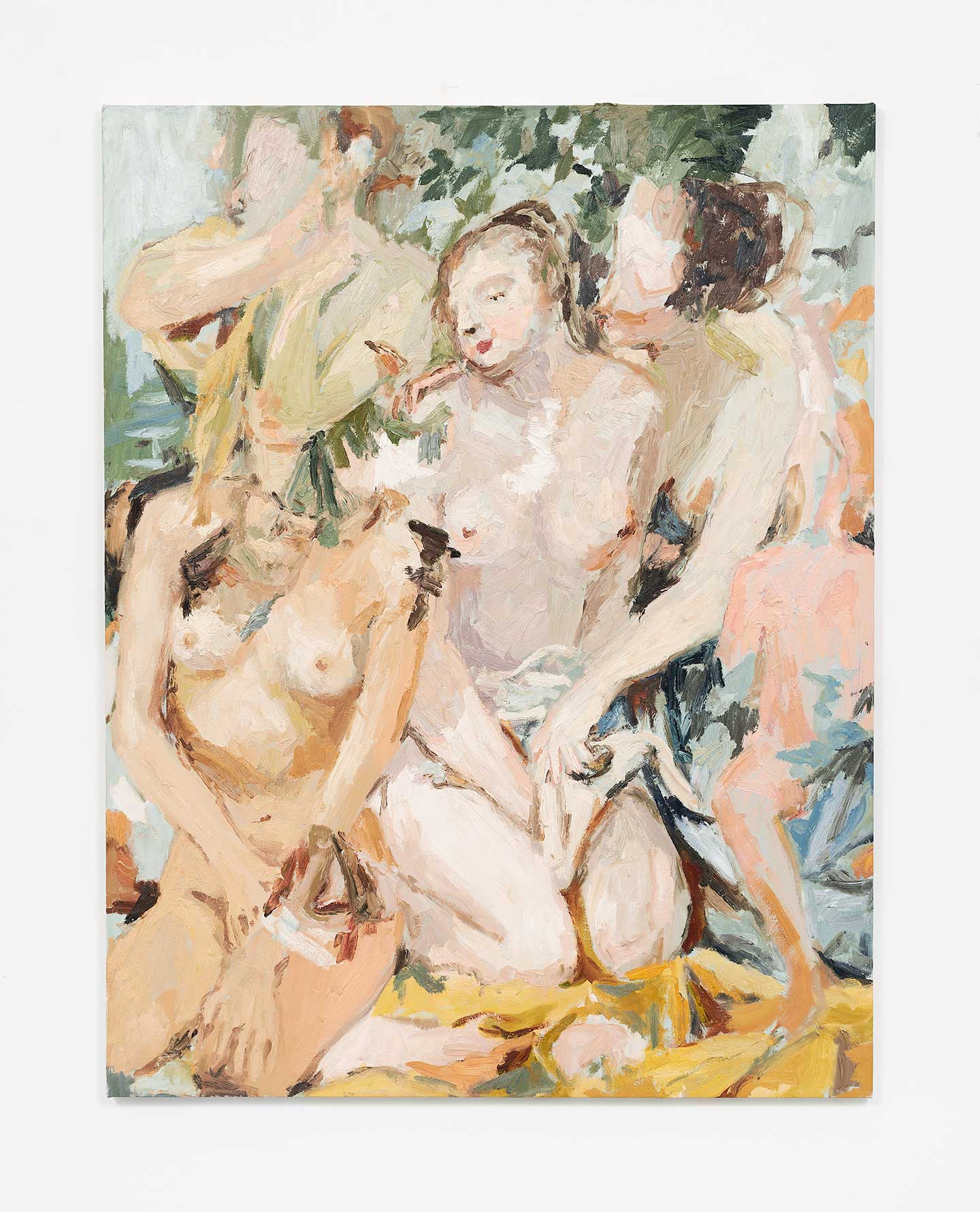 Love In A Hopeless Space 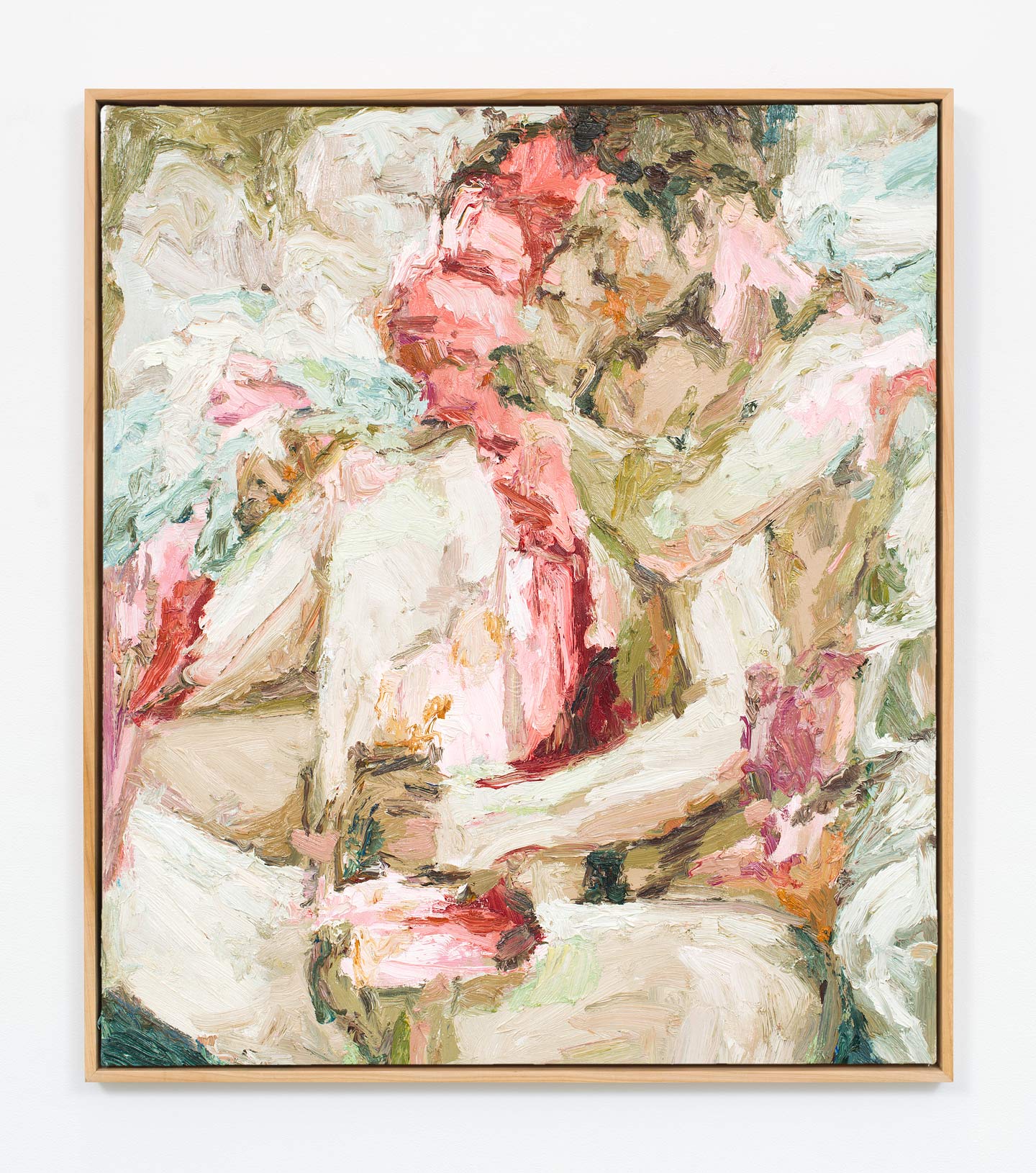 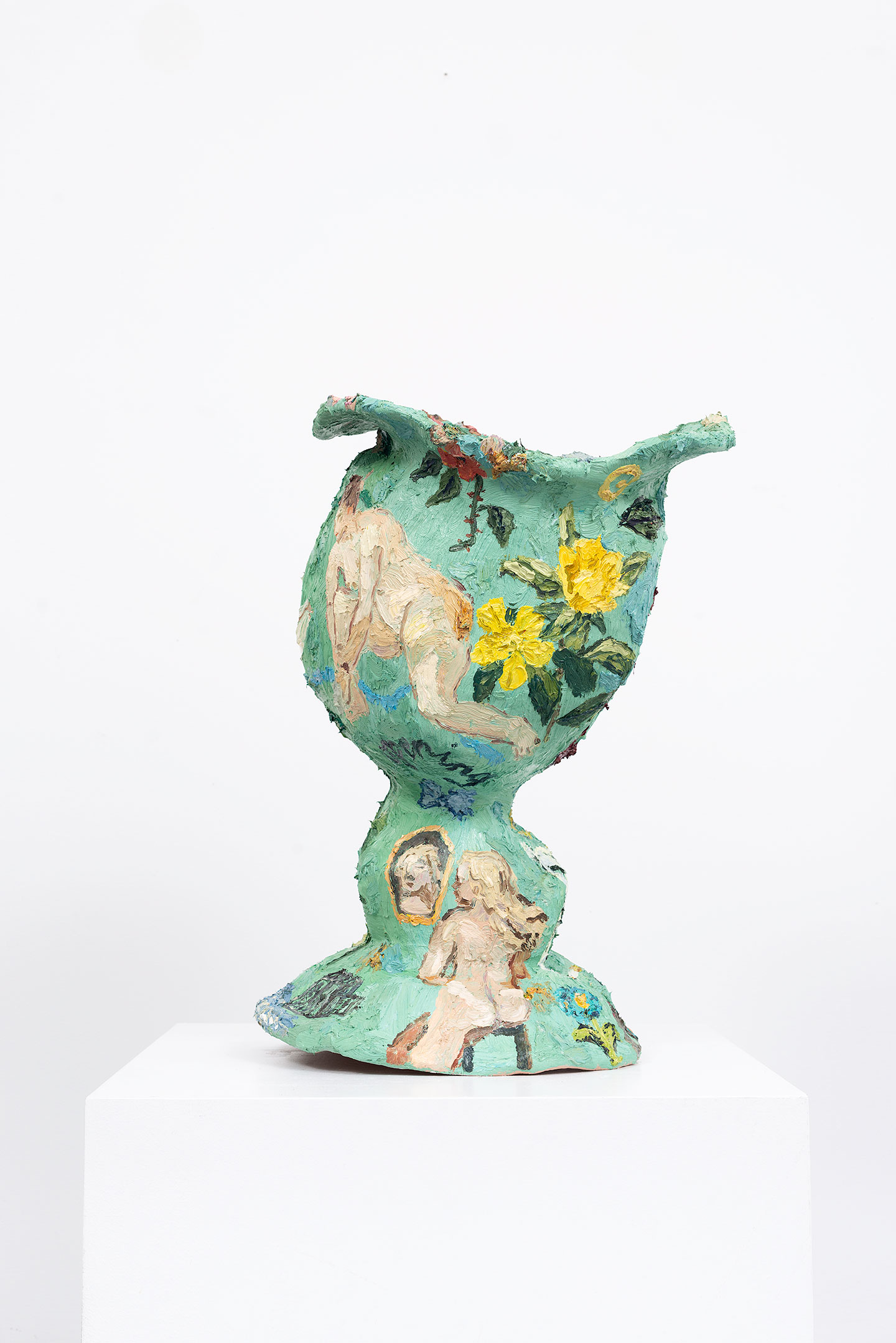 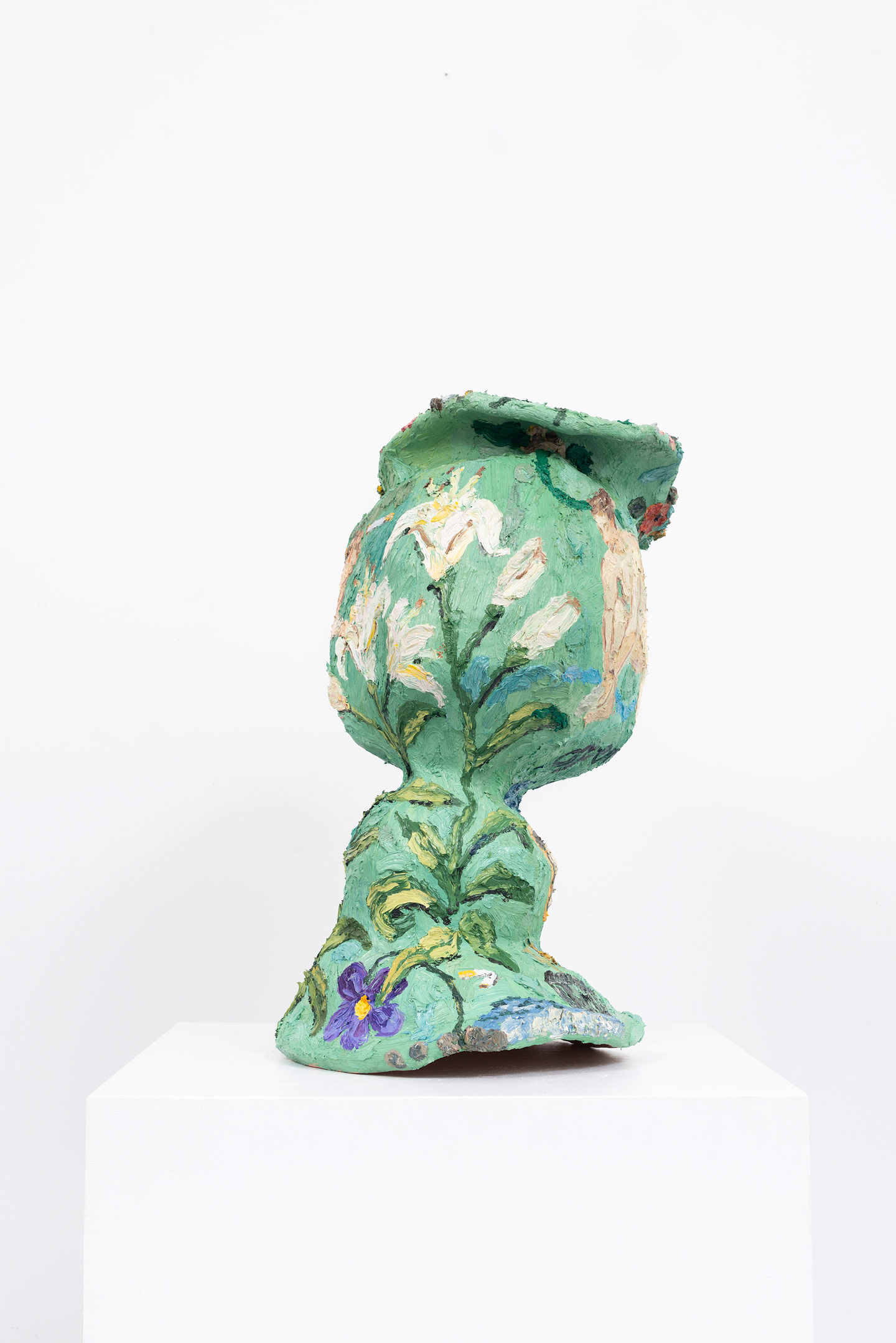 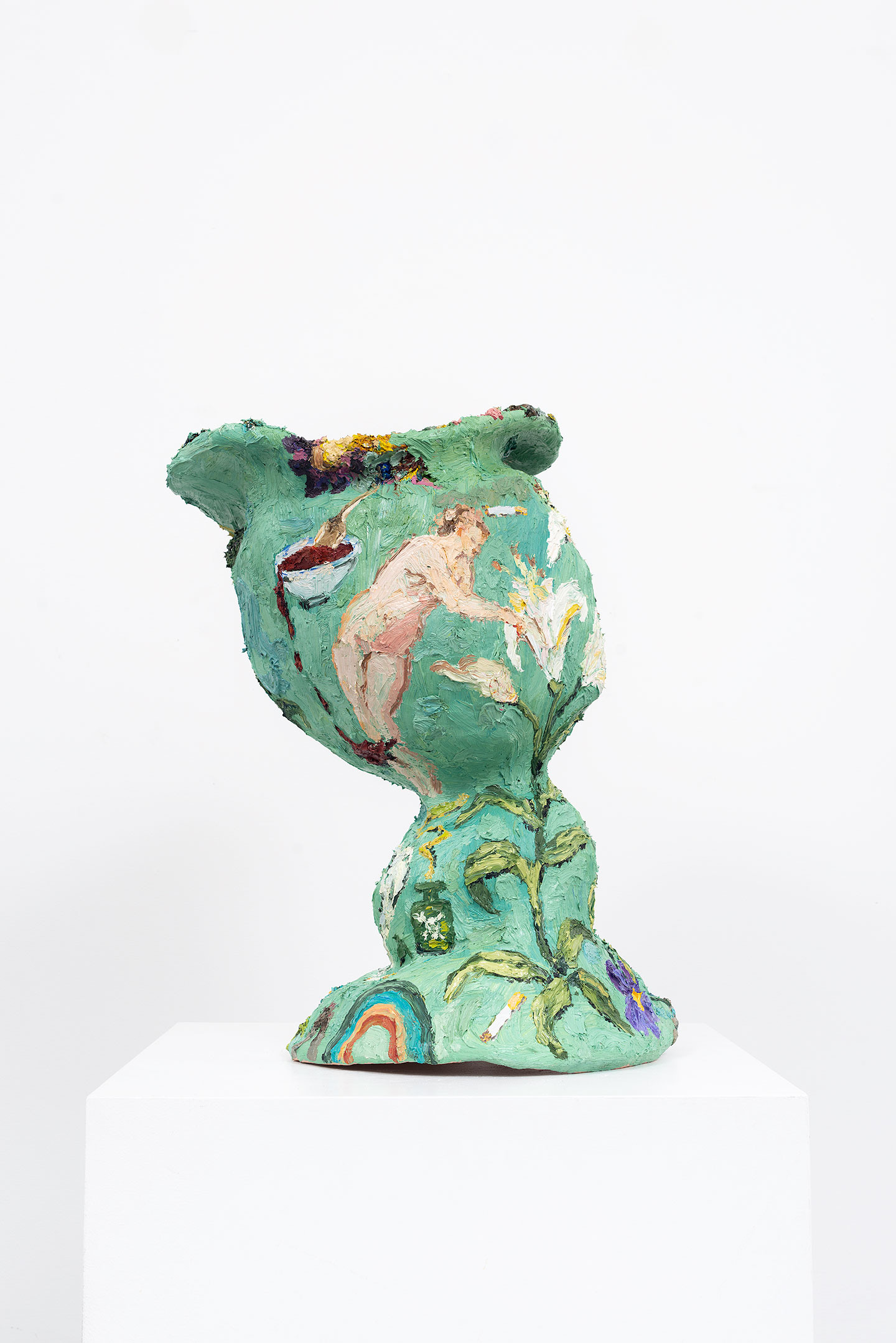 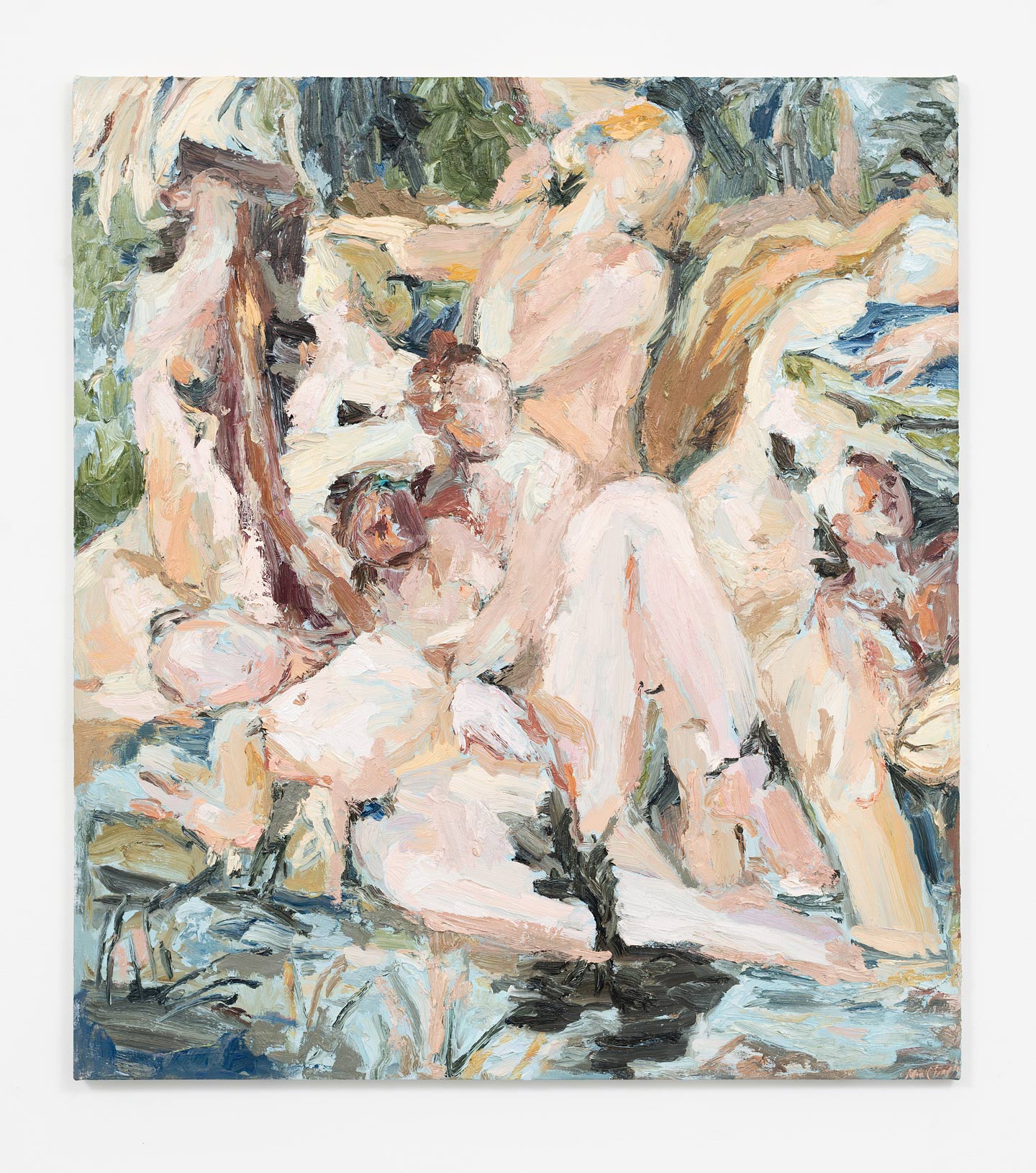 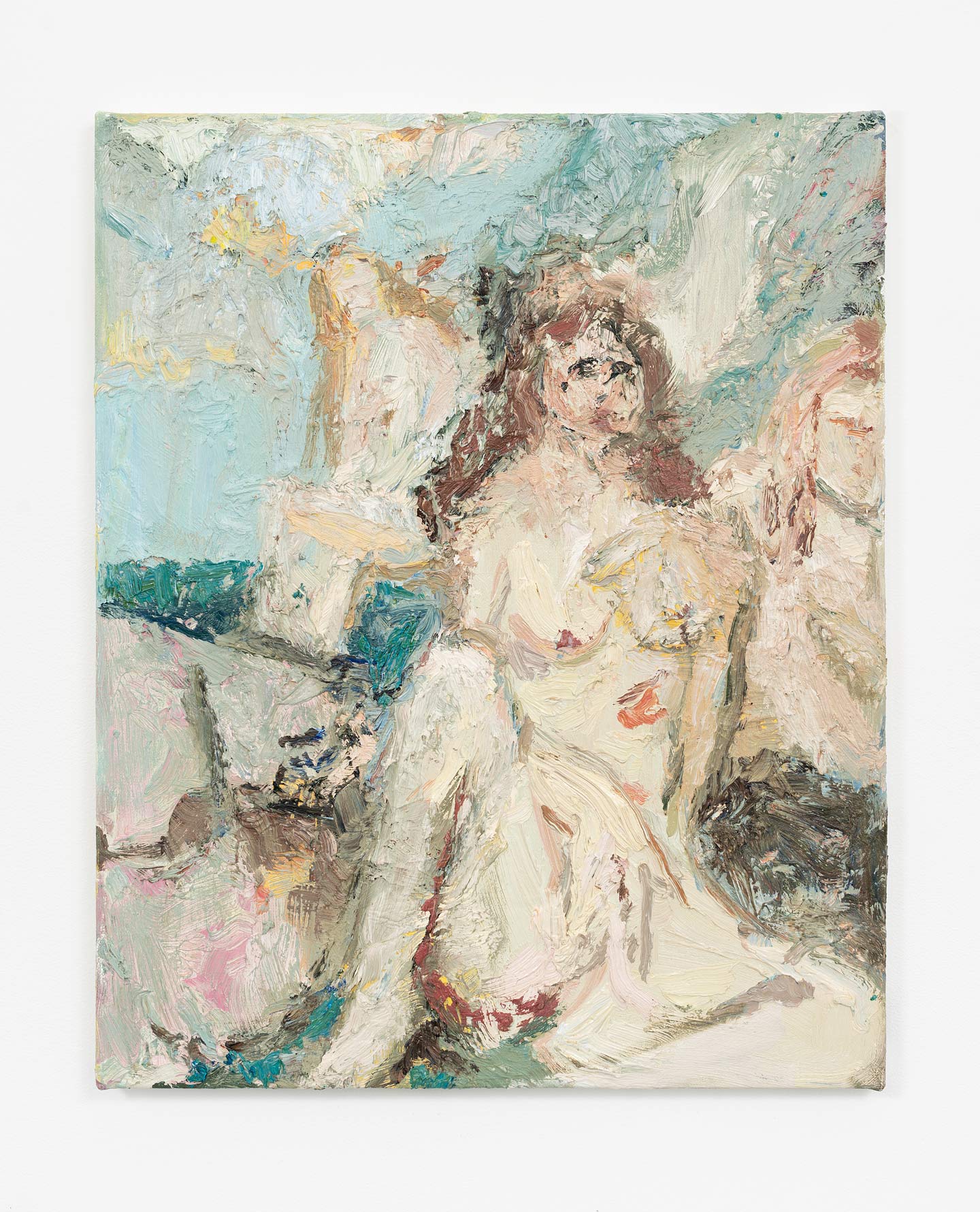 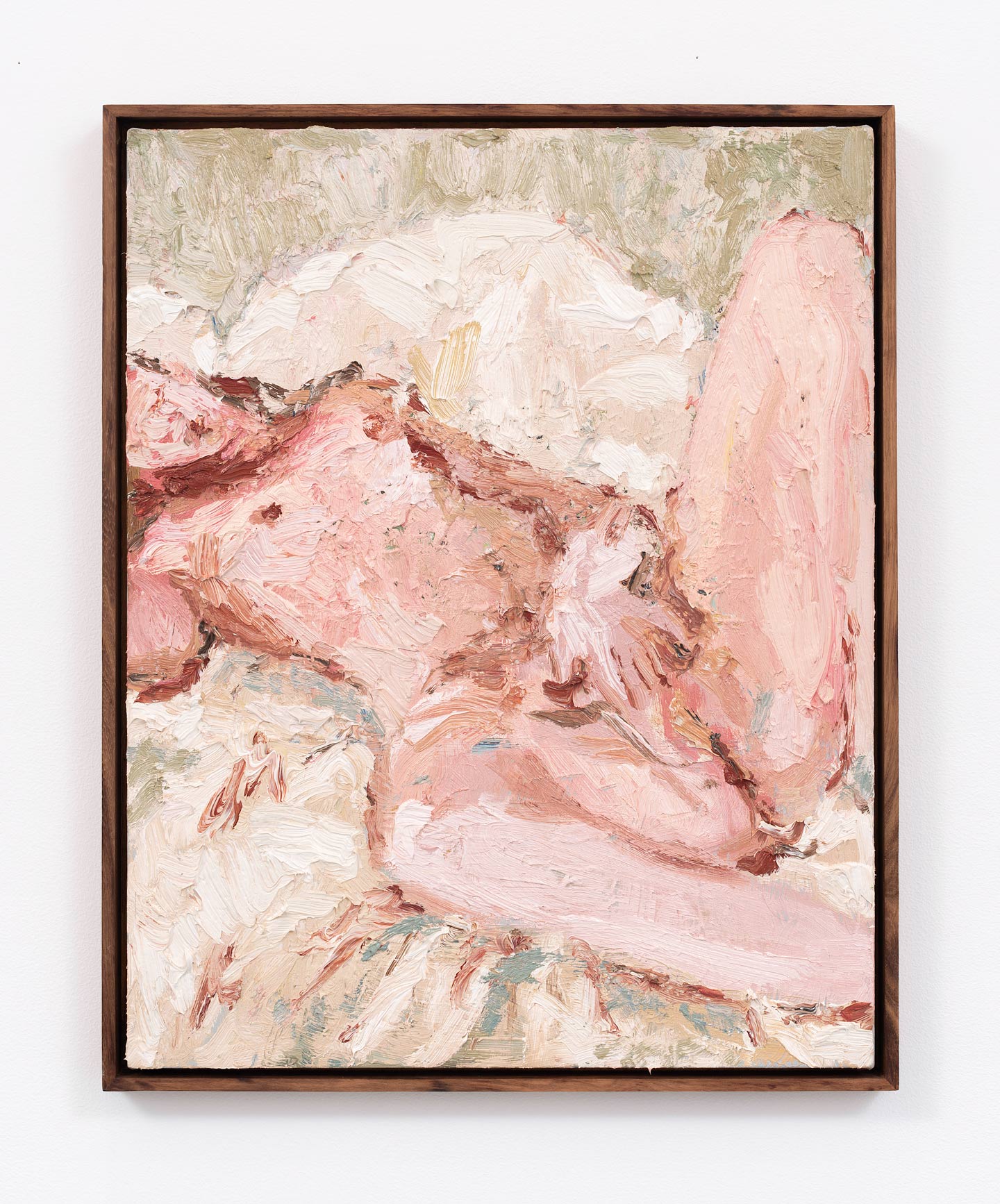 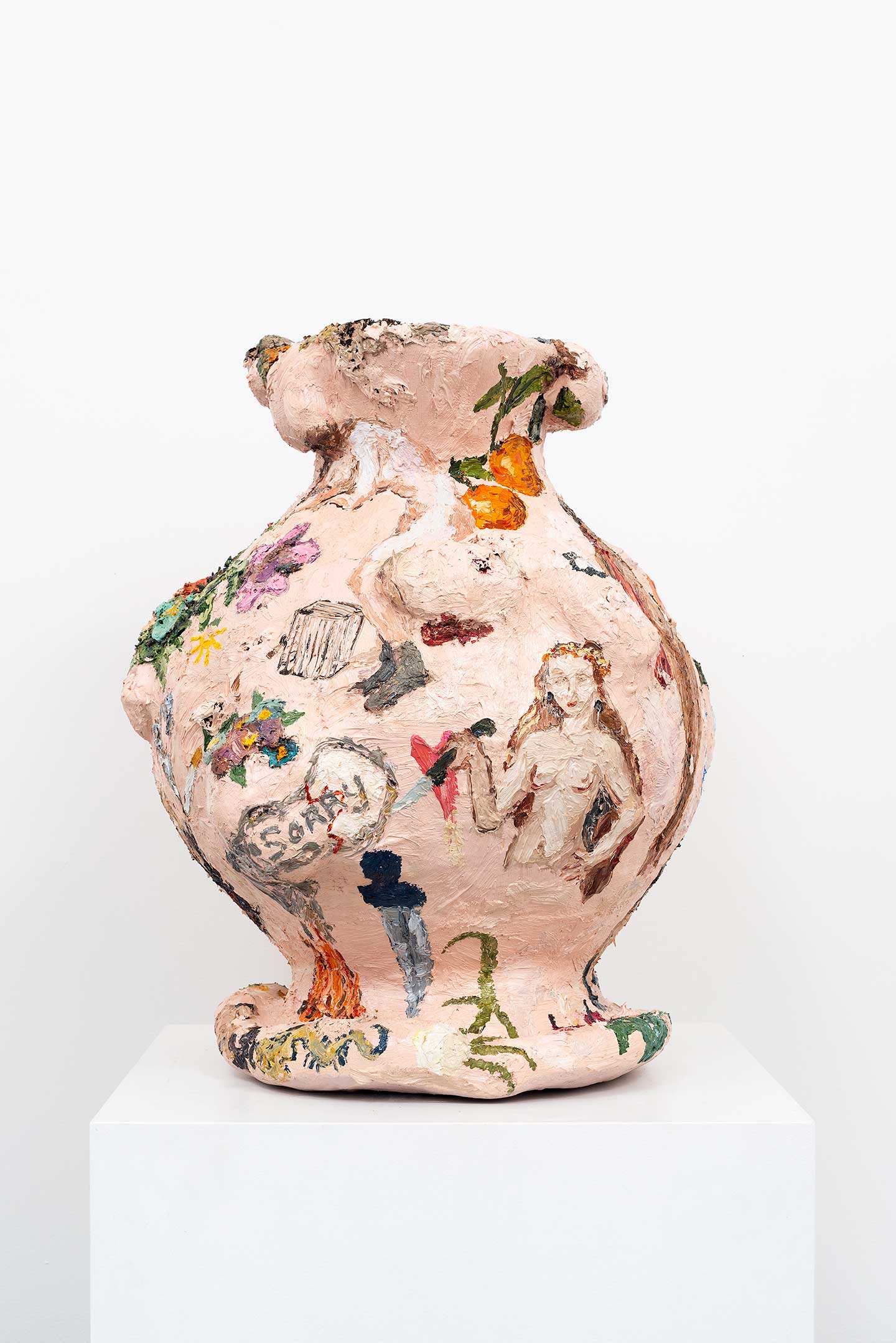 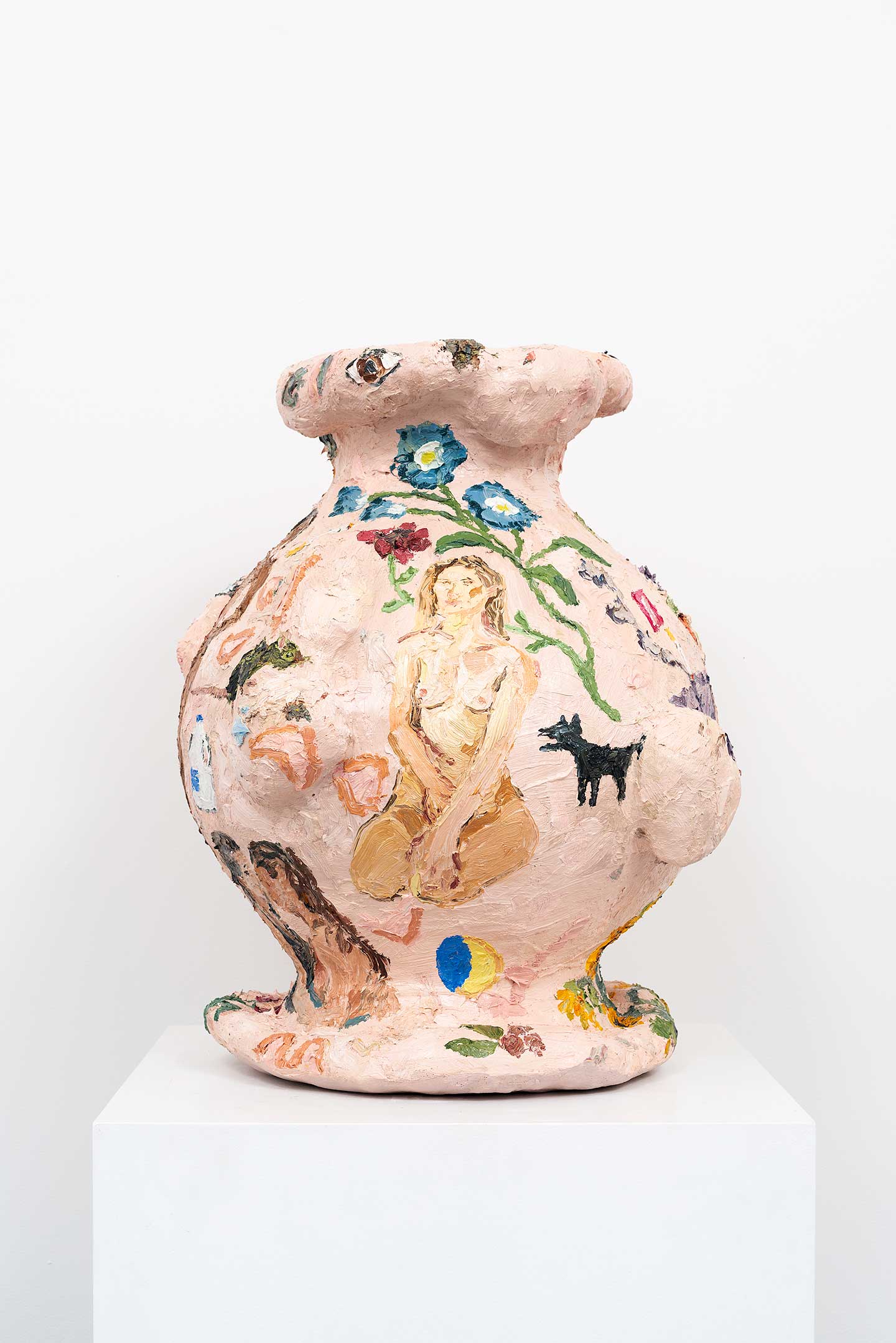 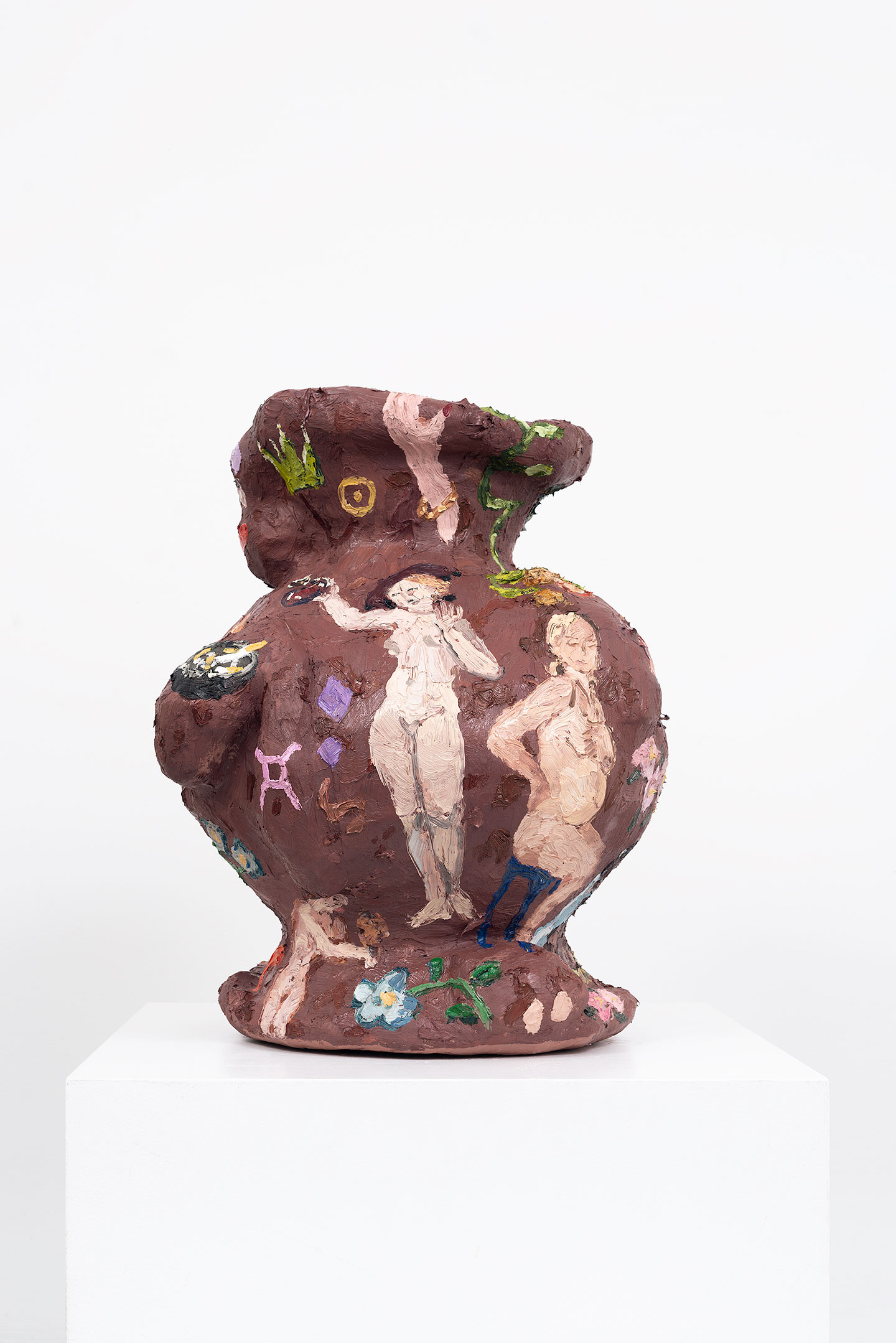 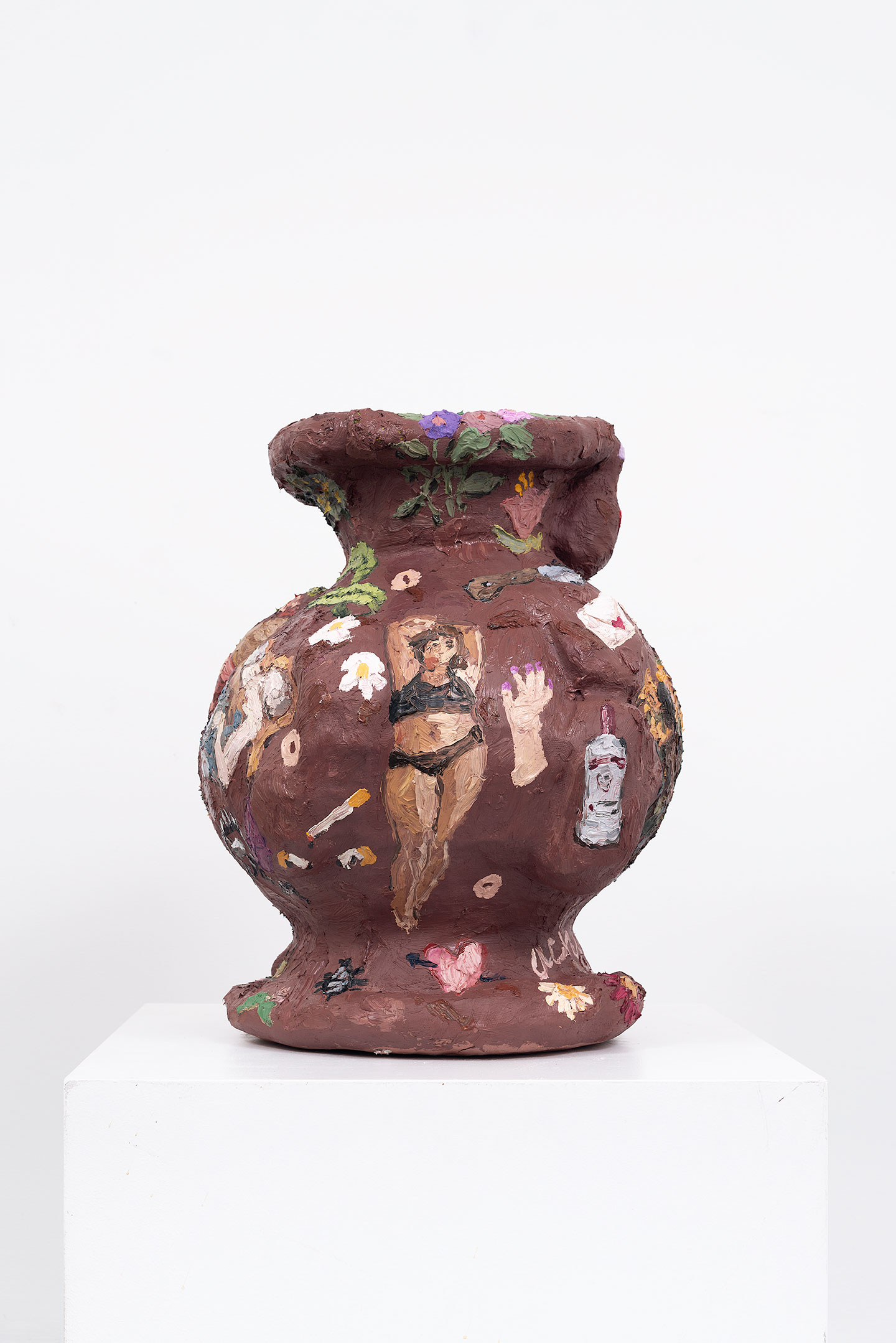 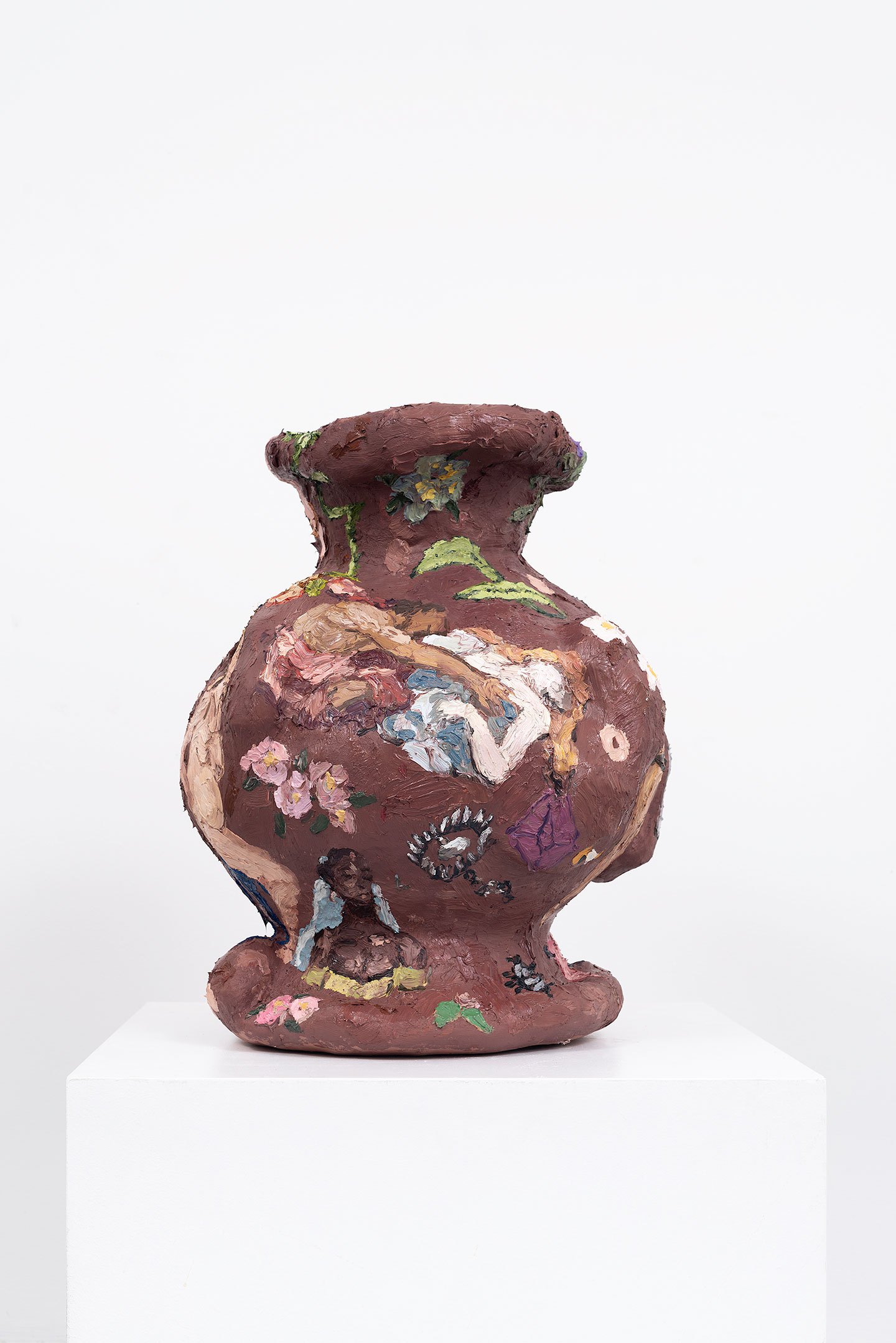 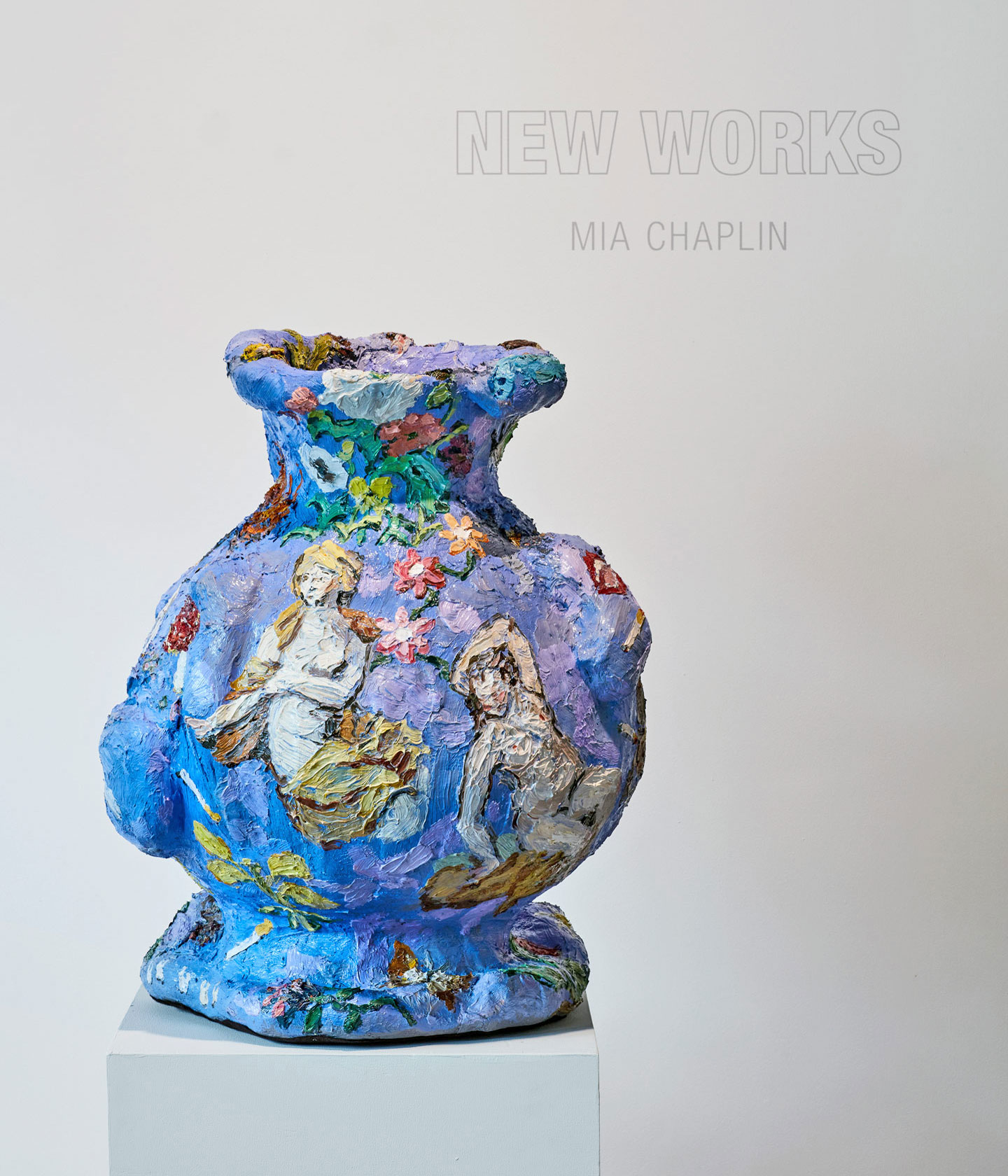 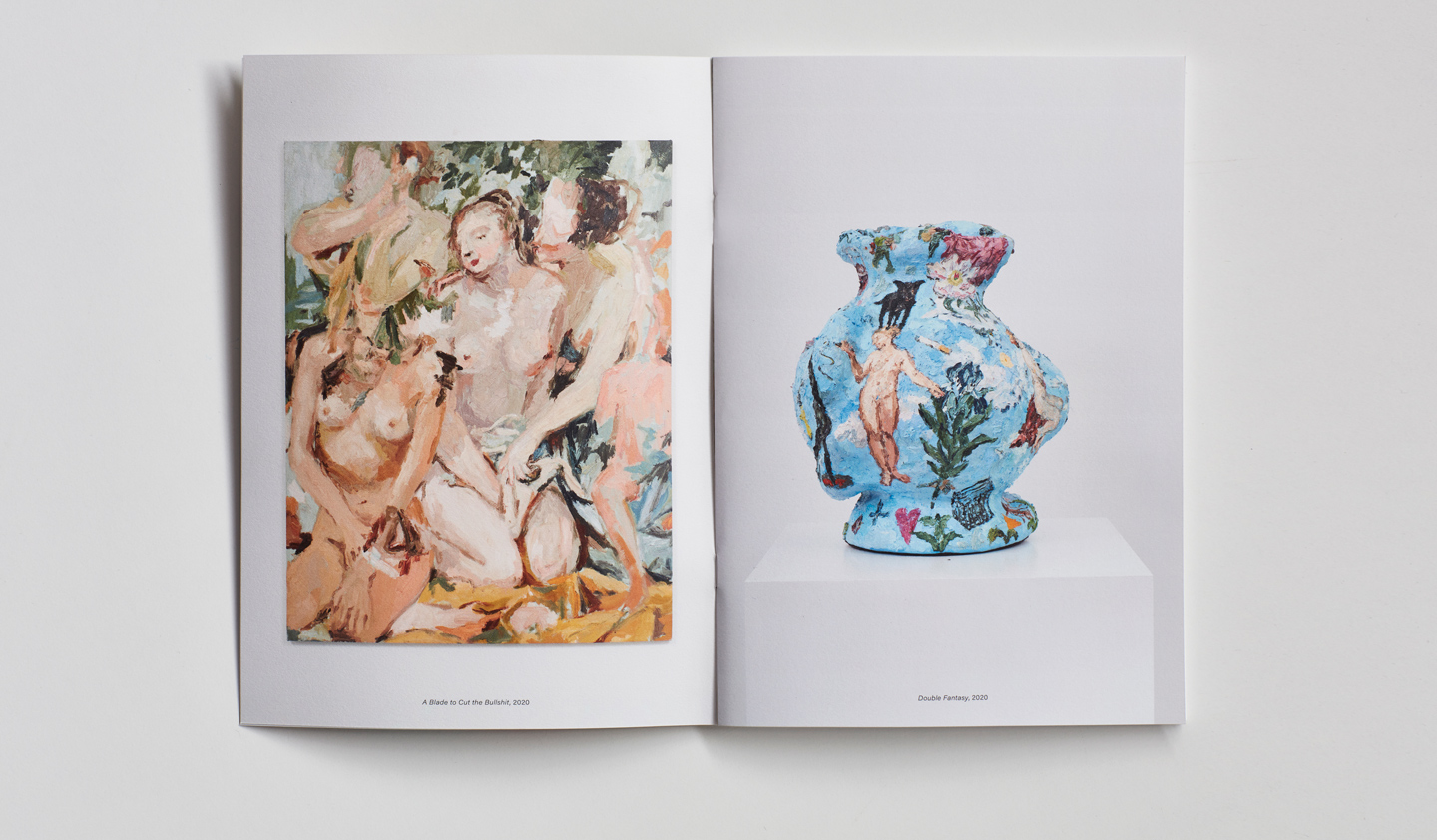 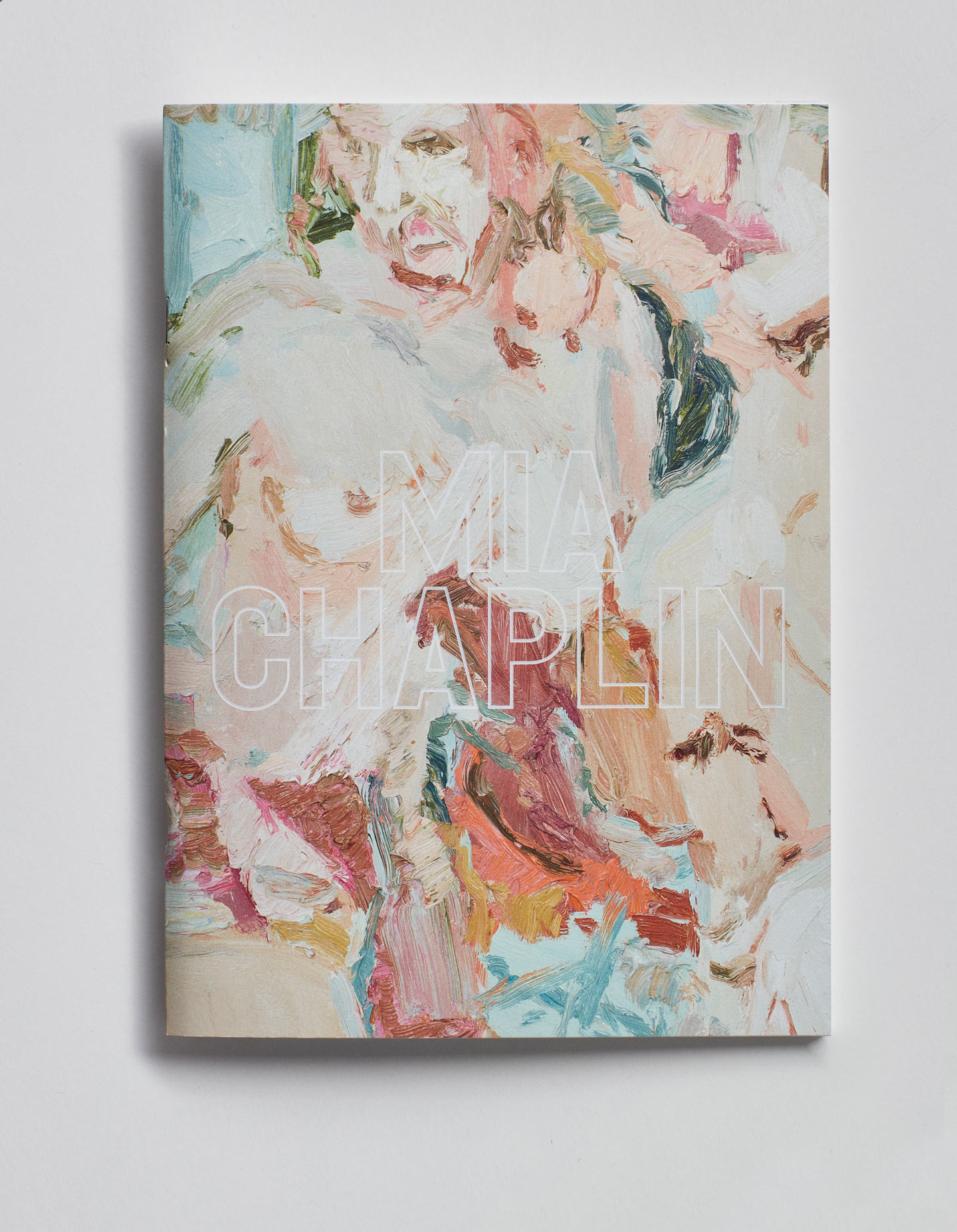 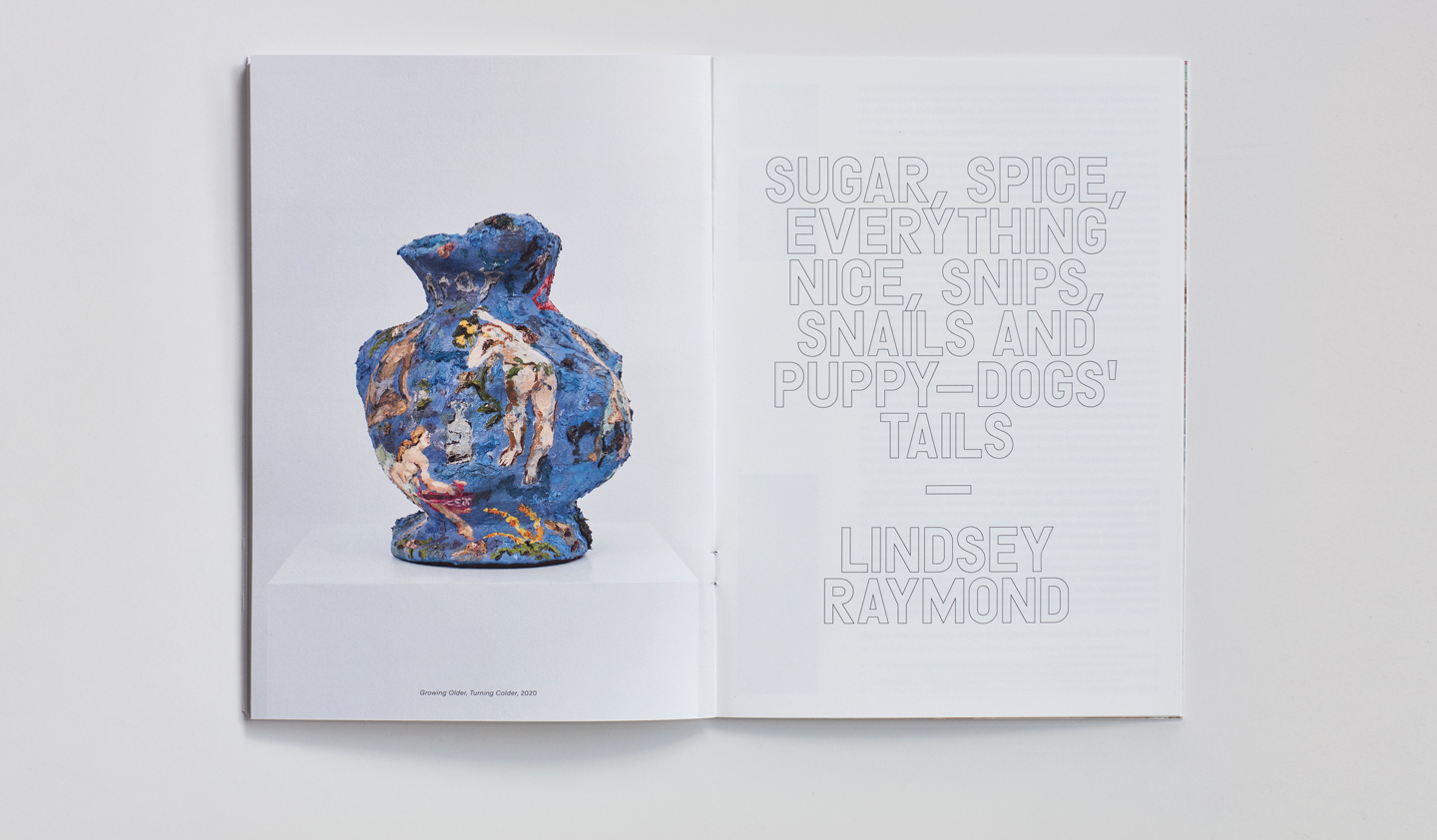 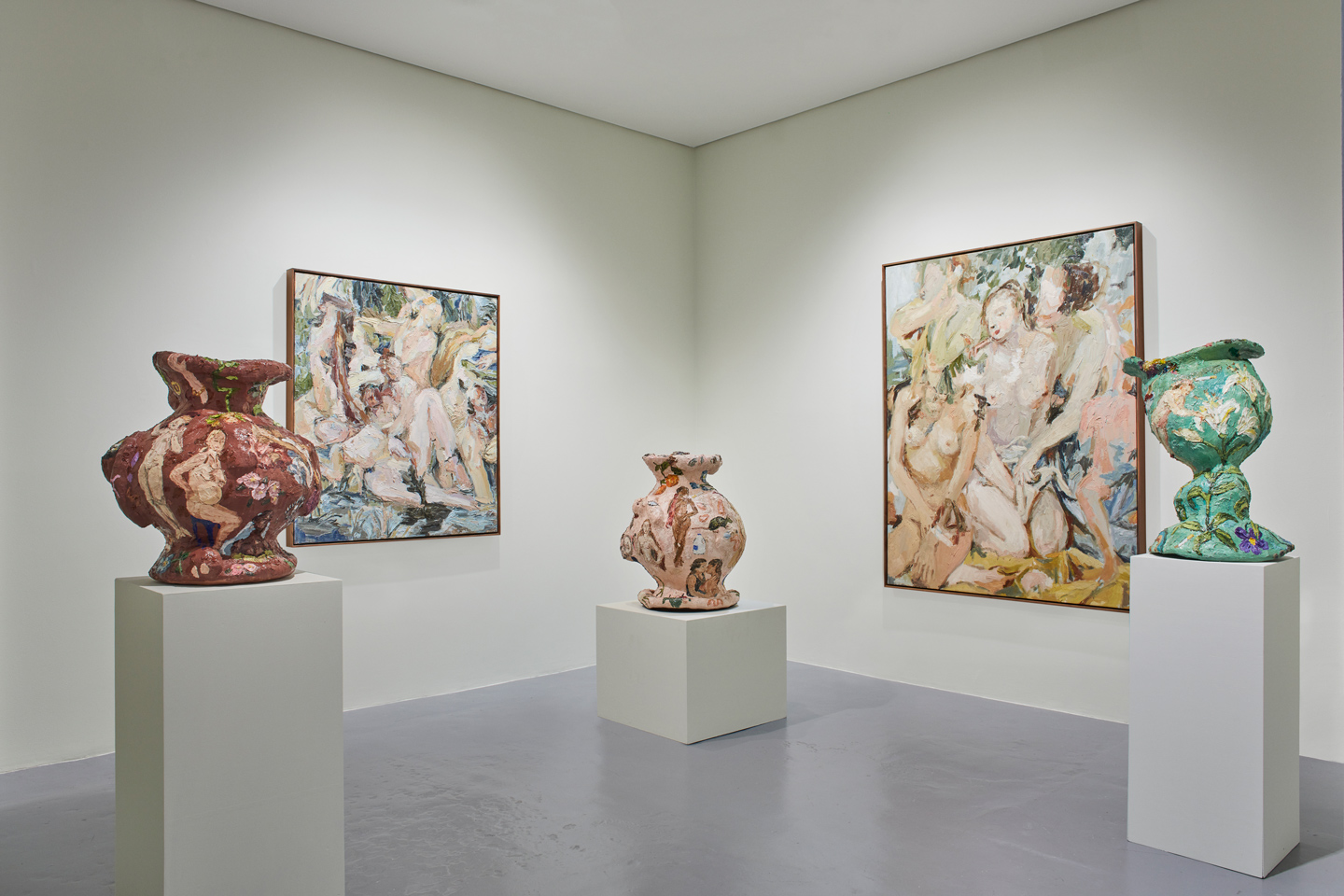 “Mia Chaplin’s iconography teeters between embracing ‘femininity’ as it is established by the Western canon, and siding with its impertinent and unruly nemesis. Tropes of the passive and pretty-in-pink little girl are put to rest along with the homemaker, maternal instincts, virginity, duty, and the weighted responsibility that comes with being assigned.

Two feminine archetypes that Chaplin often presents are those of the foreboding, beguiled damsel and the dangerously vengeful woman. When translated into contemporaneity, these become memetic replicas of a bygone era, and bare the absurdity of the inveterate inclination to uphold such tropes. Particularly in South Africa, where gender-based violence, ‘curative’ rape, hate crimes, and rampant femicide causes fresh horror daily, these stereotypes feed into social behaviours such as victim-blaming, scapegoating, perpetrator advocacy, and ongoing issues of misogyny, sexism, racism, transphobia, queerphobia, xenophobia, and ableism. Chaplin gives testament to both the resilience and resentment of women and feminine-of-centre persons living in South Africa and the world.

She creates a narrative of womanhood and femininity that is complex: it is all at once ugly, violent, comforting, and containing. The most symbolic of this journey, are Chaplin’s sculptural works. Loosely shaped after vases and urns, these wire frames are covered in papier-mâché and plaster of paris, and finished with oil paint. Although doused in the allure of rich impasto and flowers, these reveal rigorous socio-political commentary and a more sinister underbelly. One poignant inclusion to Chaplin’s visual lexicon of signs is a little black dog, as seen in Shoulders Drop (2020). Attributed to the phrase “The Black Dog”, the symbol refers to depression. In accordance to Jean-Paul Satre’s theorisation of semiology (Richards, 2008:11-28)*, this is an example of the weightiness of signs and what they communicate through their subtleties.

Another example of this, is Chaplin’s use of the ‘Bad Women’ archetype, an alternative heroine to the idealised woman, as seen in Lost Women (2020). This character materialises through cigarettes, rats, bleach bottles, glasses of wine, daggers, blood, serpents, and beady eyes. These bad omens co-exist with the frivolity of reclining nudes, stargazer lilies, ribbons, and clouds. Rather than reading these as polarities, Chaplin creates all-inclusive and imperfect totems to women.

Chaplin’s ‘bad girl’ motif embraces behaviours typically associated with the masculine as a way of counteracting feelings of powerlessness and shame. Femininity is systemically synonymous with weakness – delicate, poised, subservient, fragile, passive. Her role is to undermine impossible societal expectations placed on women by being imperfect, assertive, and decisive. She expresses anger as a way of validating pain, and working towards healing and empowerment.

Women’s positioning as either saints or sinners, and the mythological correlation this has to Eve’s expulsion from the Garden of Eden, is also touched on by the artist. Chaplin surrounds her figures with flora, exploring nature’s representation as a woman throughout language, literature, and art history. ‘Mother Nature’ has been feminised as a beautiful and fertile muse. In Early classical mythological, goddesses were connected to nature and in High Romaticism, nature functioned as an access point to the masculine sublime. However, nature is also perceived as easily antagonised, uncontrollable, treacherous, and violent; natural disasters such as hurricanes, for example, are named after women.

Nature, like women, is either celebrated or eschewed. It is this kind of disenfranchisement and damnation that Chaplin, like many women, finds so frustrating. In The Damned (2020), the artist uses pyramidal composition to draw our eyes from a sprawled figure, being touched or touching herself intimately; to a women in a quintessential ‘damsel in distress’ posture; and then across to three alert, bobbing heads either surveying their territory or guarding their troop. Referencing Peter Paul Rubens’ drawing for The Fall of the Damned (1614/1618), which portrays those declared guilty following God’s final judgement, sinking and being hauled by demons towards Hell. This work summarises the anxieties of womanhood, particularly in South Africa. Chaplin guides us through the complexity of being assigned as doomed.

This more recent style of the artist’s embraces a cubist fragmentation of the pictorial plane, and obfuscation of foreground and background. The limbs and torsos of Chaplin’s nudes fracture and overlap across the surface; at times represented only by a swatch of colour. Chaplin conflates this cubist style with the odalisques of exotic Romanticism and the Italian Renaissance’s Venuses in pudica pose; the latter era being unattainably hyper-feminine and the former, effortlessly masculine. She uses the varying gendered styles of these eras to portray unconventional feminine subjects.

Writer and theorist Maggie Nelson states in The Argonauts that, “To be femme is to give honour where there has been shame (Nelson, 2015:31-32***).” Chaplin’s complex use of symbolism and tactile style, feed into this honour. Much like her work titled Soothe (2020), Chaplin’s practice is an intimate journey of ‘self-soothing’ and healing.”

Mia Chaplin (b.1990 South Africa) is a painter who lives and works in Cape Town. Working in oil on canvas and paper, her highly expressive works are characterised by their rich impasto surfaces and visible brushstrokes. Chaplin’s most recent works emphasize a muted colour palette of pink fleshy tones and golden highlights. Consisting of still lifes, figure studies and landscapes, her work seems to meditate on the familiar. Her loose, erratic style of painting – synonymous with that of the impressionists – is intuitive, heightening the emotionality of her pieces. They communicate a sense of estrangement; reflecting a detachment between the self and her surroundings. Her works sway between voyeurism and intimate interaction, while remaining consistently self-referential.

Since completing her BFA at the Michaelis School of Fine Art in Cape Town in 2011, Chaplin has hosted four solo exhibitions, Mouth (2018), Under a Boiling River (2017) and Binding Forms (2016), with WHATIFTHEWORLD and most recently, Underbelly (2019), with No Man’s Art Gallery in Amsterdam. She has furthermore extended her painting practice into printmaking, hosting a mini-exhibition of monotypes from the series, The Making of a Sharp Blade (2017), in collaboration with Warren Editions, Cape Town. Chaplin has completed artist residency programmes at Cité Internationale Des Artes in the Marais district, Paris (2018), Nirox Arts Foundation in Johannesburg, South Africa (2016) and at OBRAS Foundation in Alentejo, Portugal (2015).