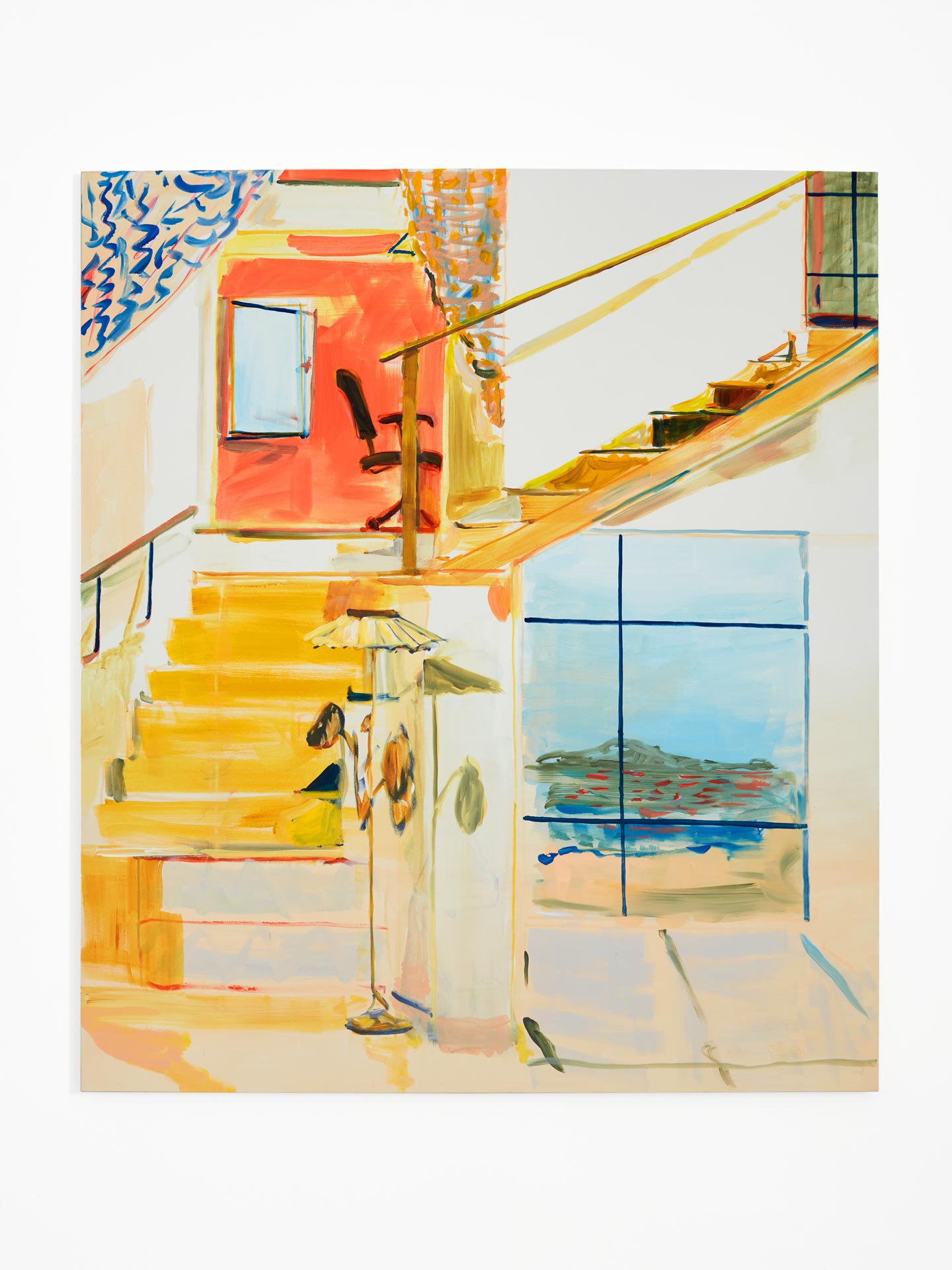 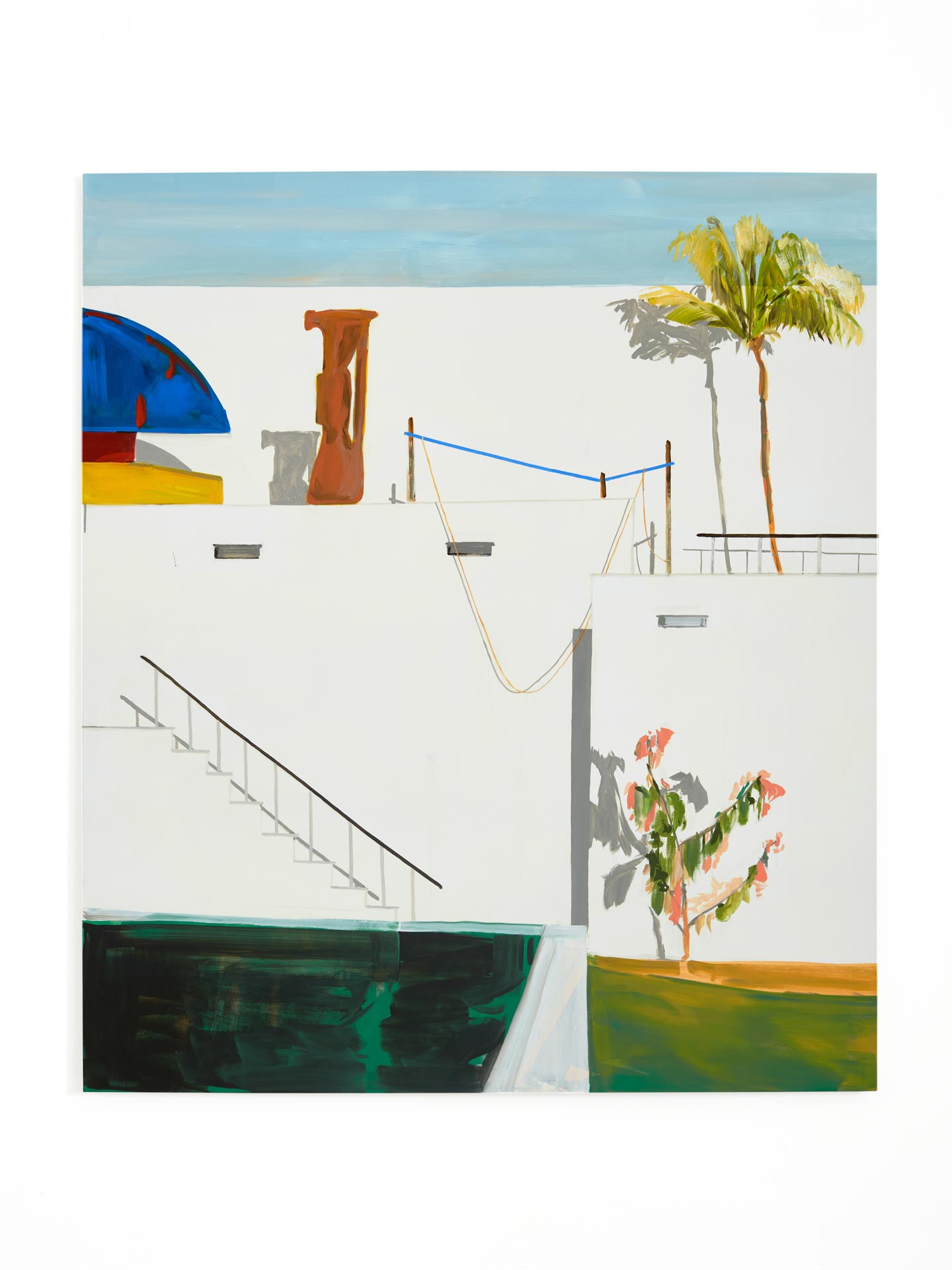 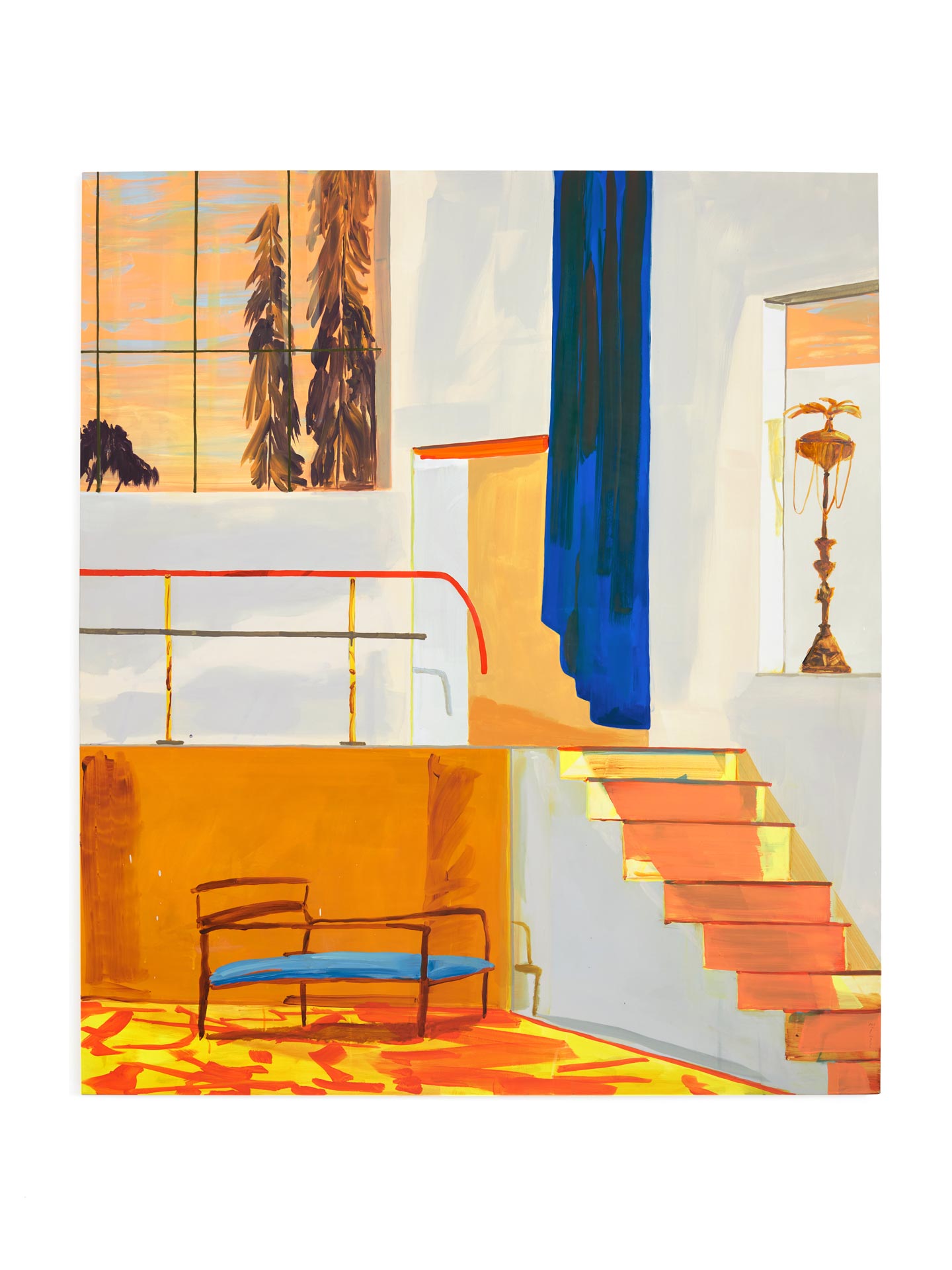 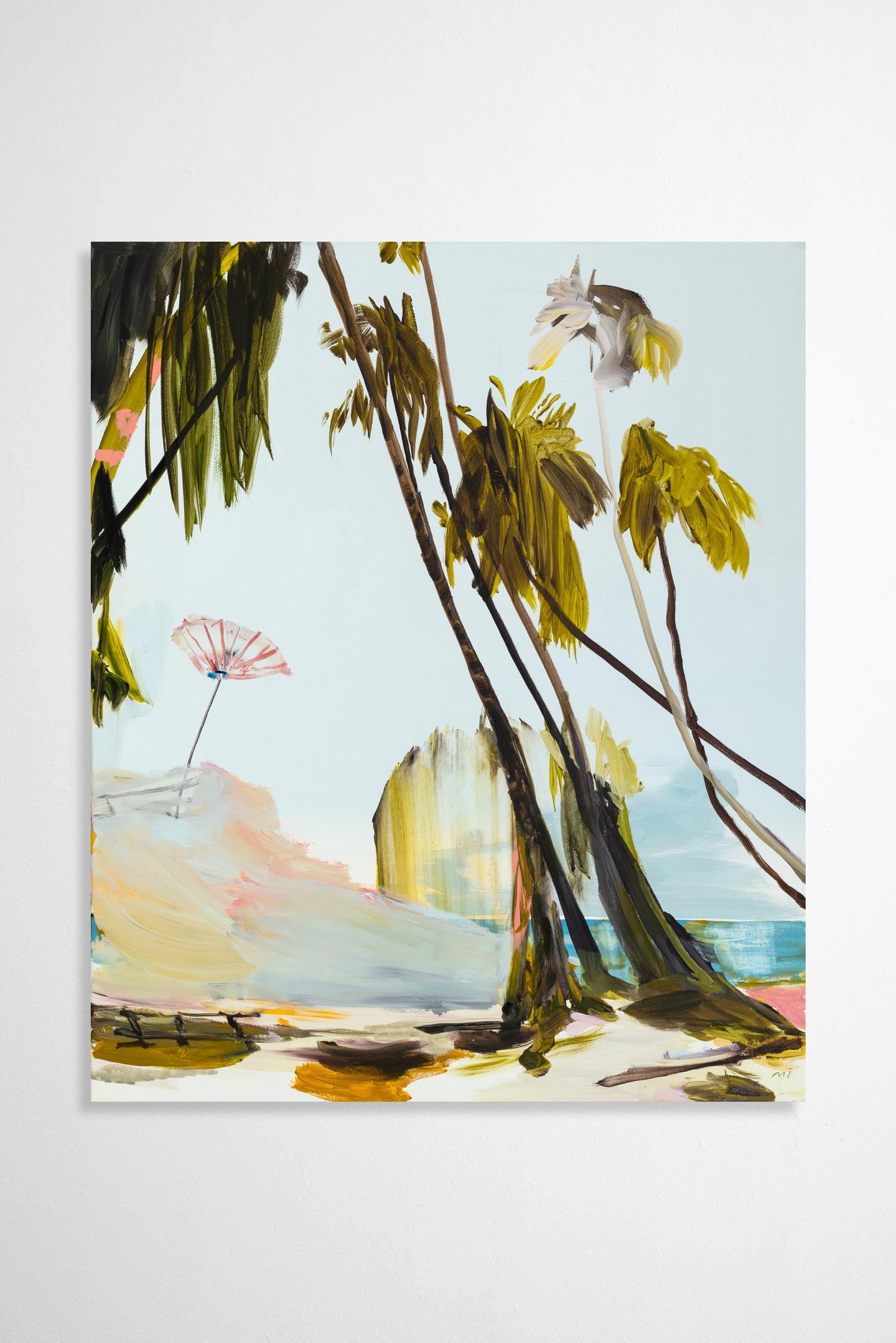 Self Portrait as the Boy Next Door 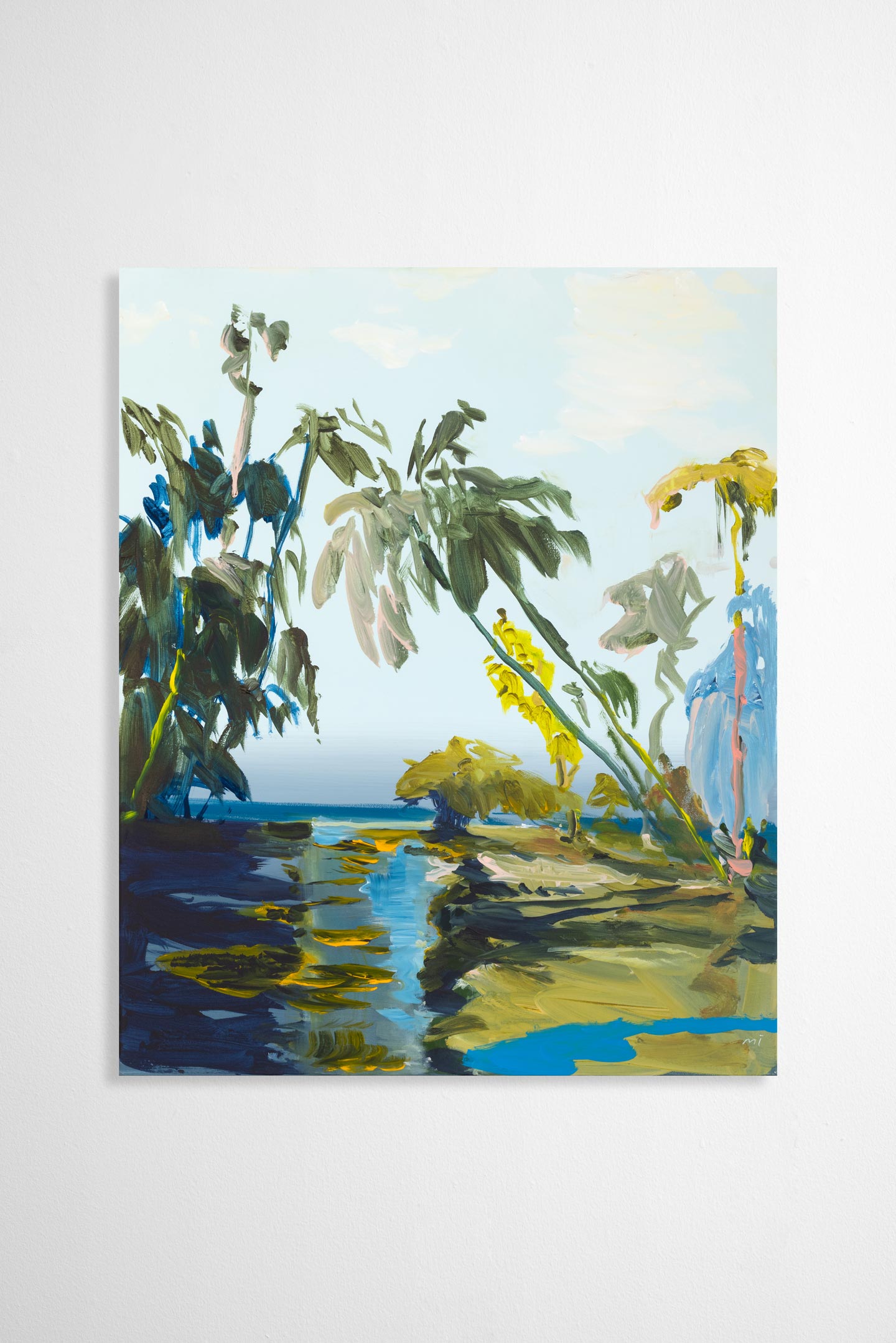 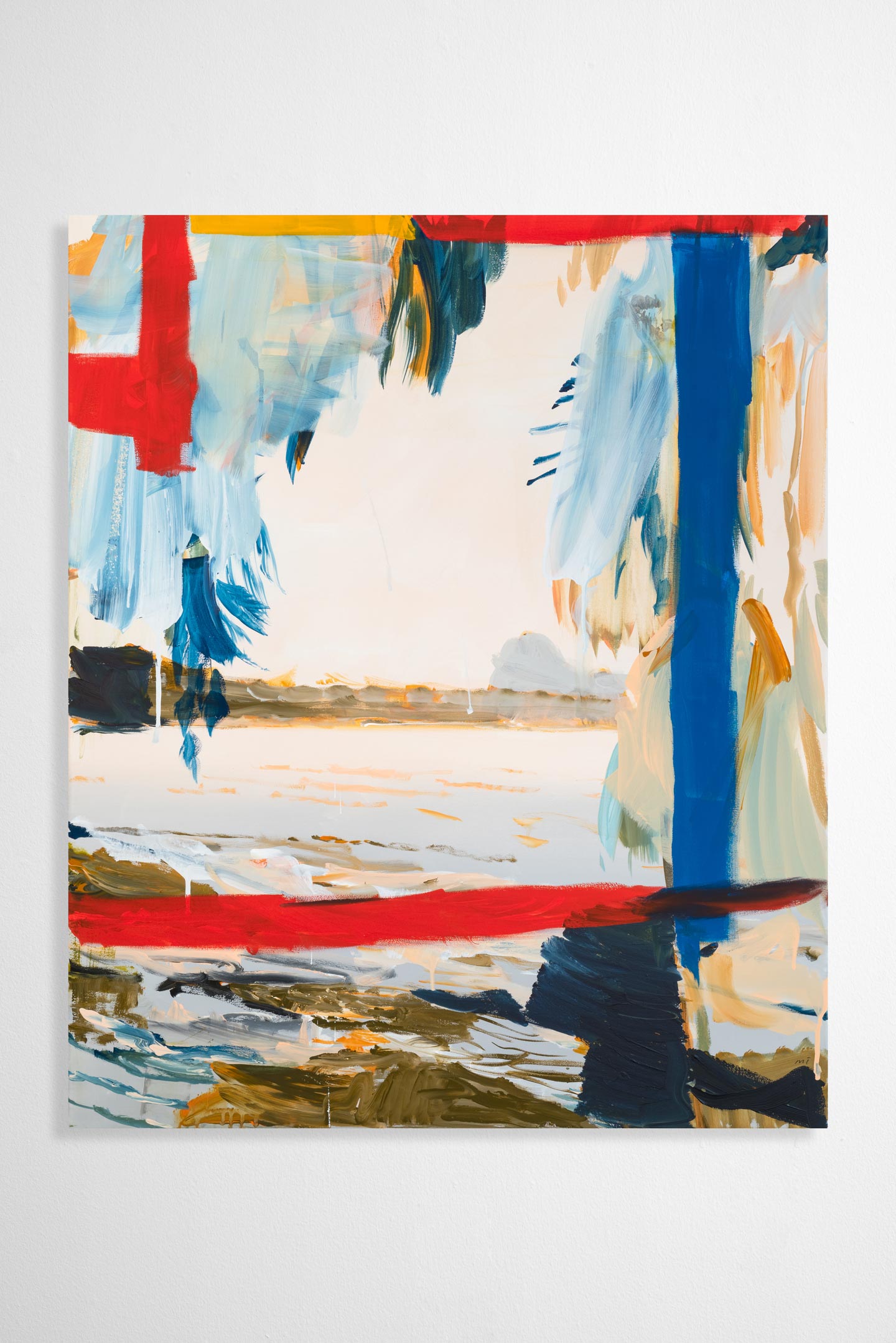 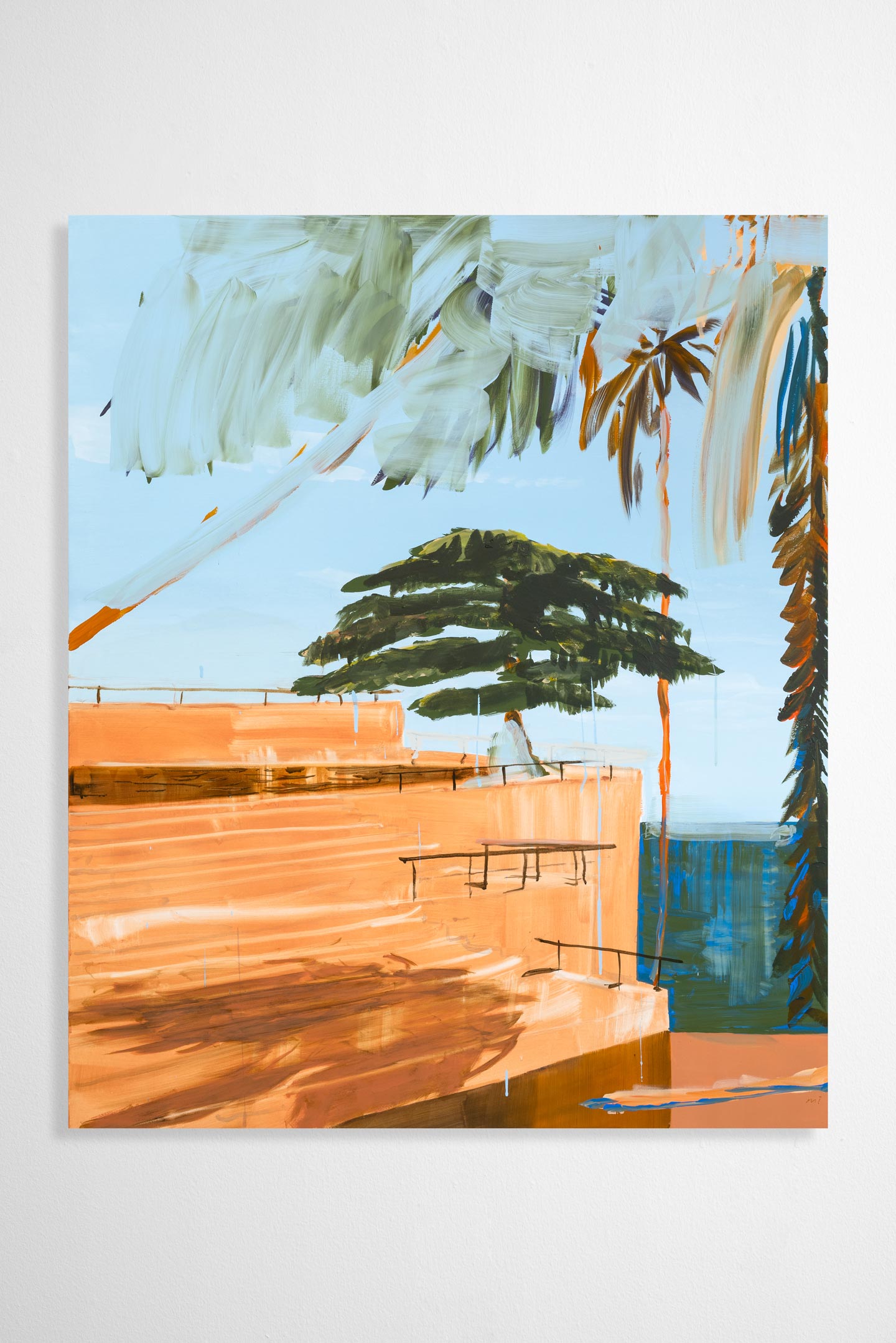 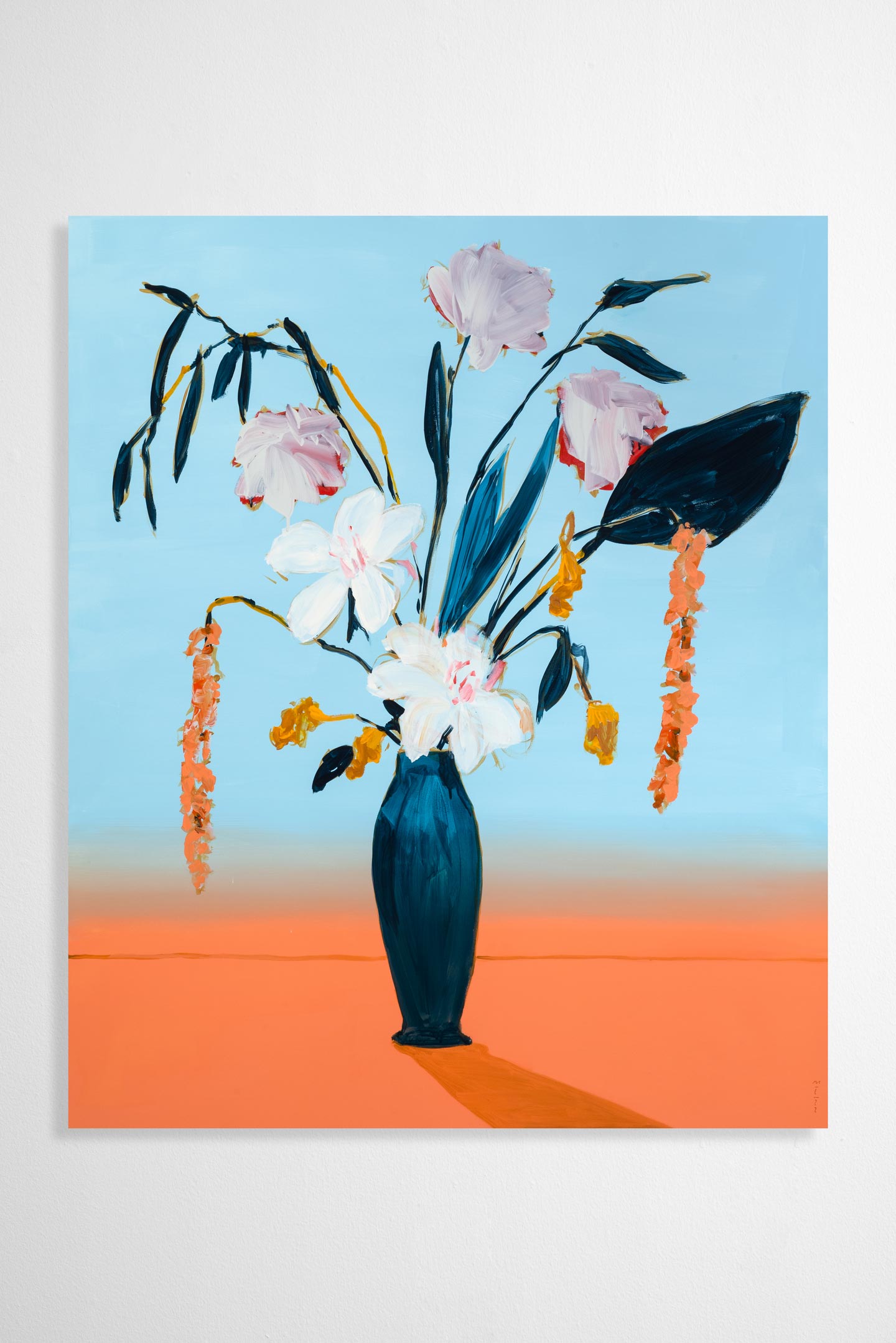 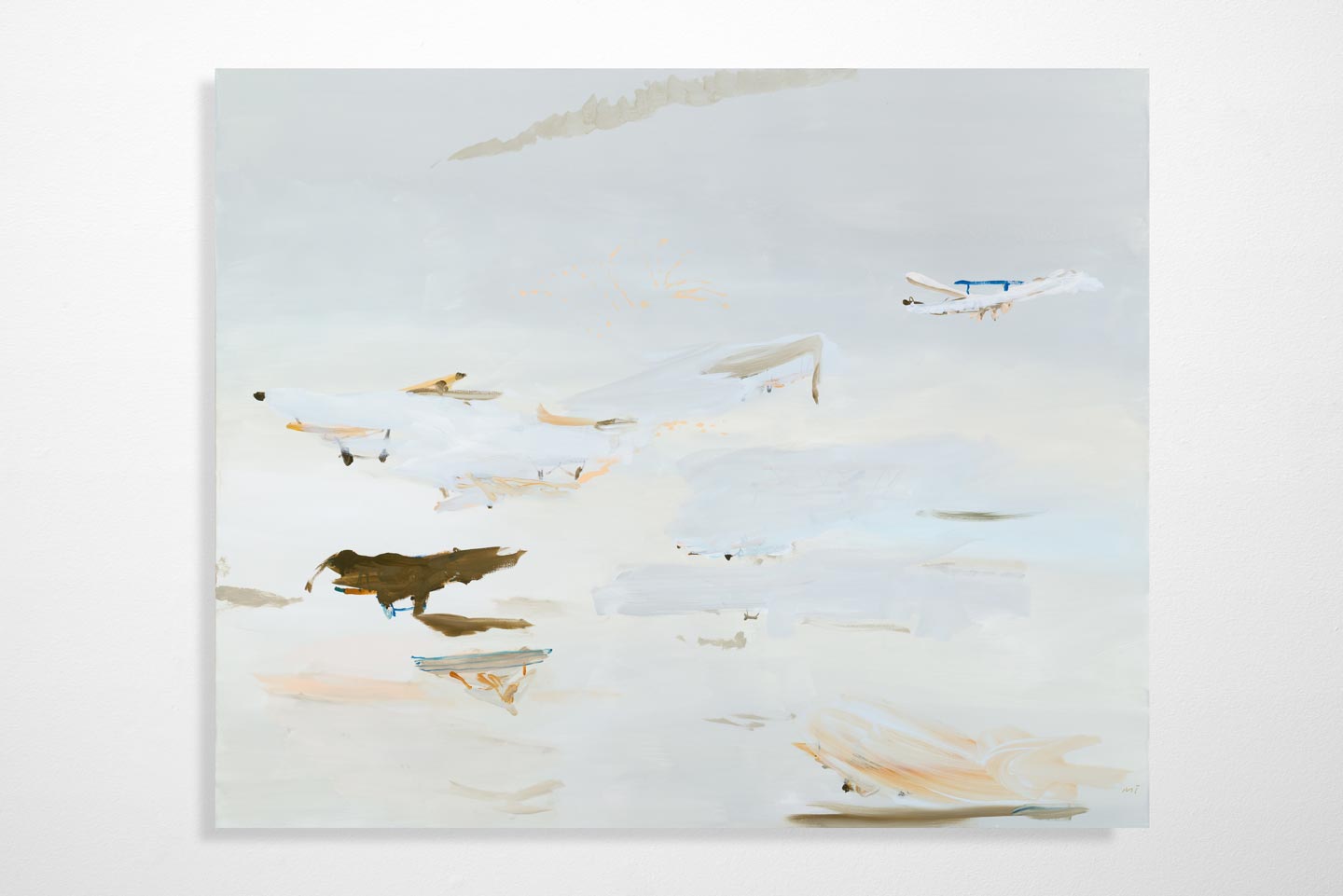 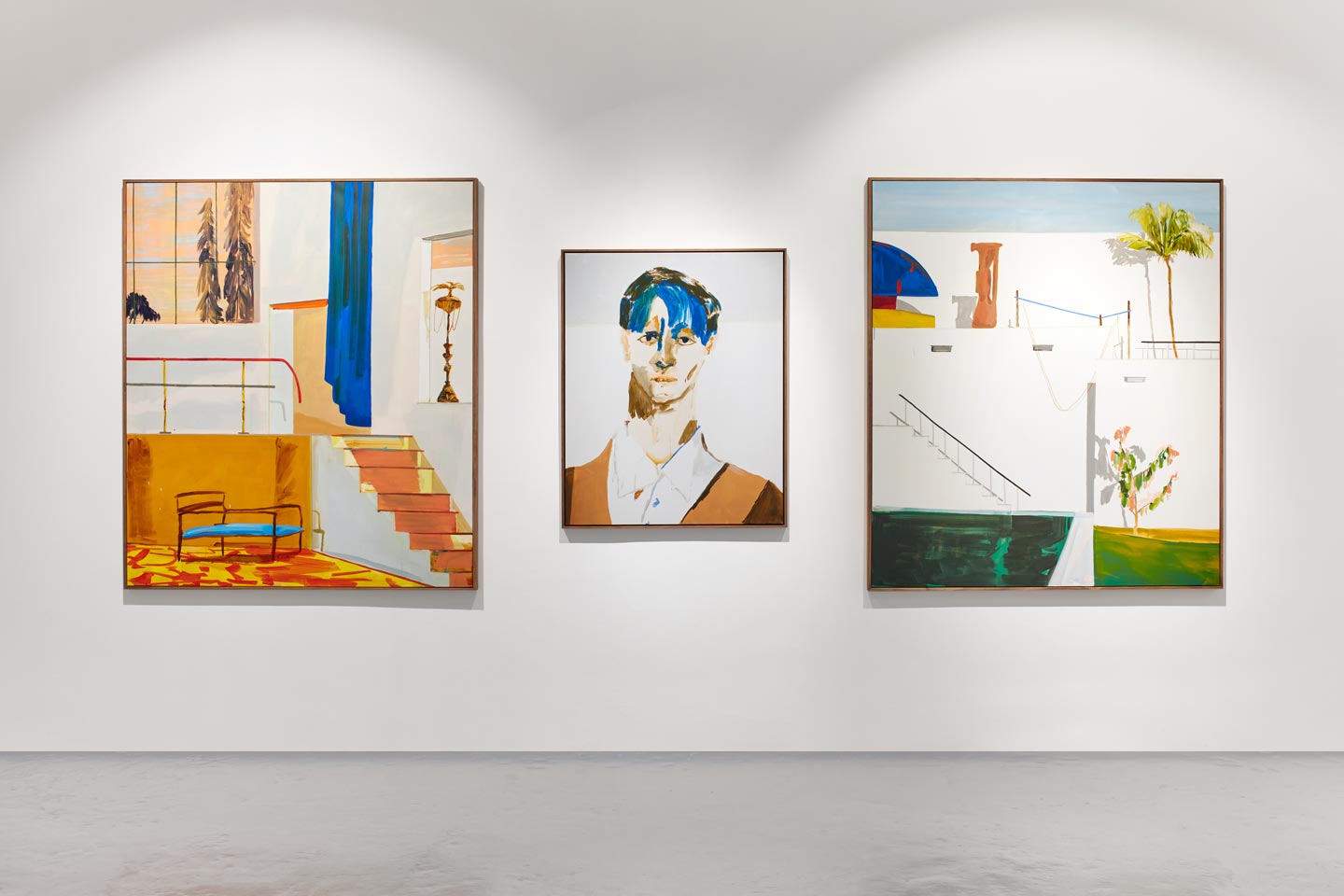 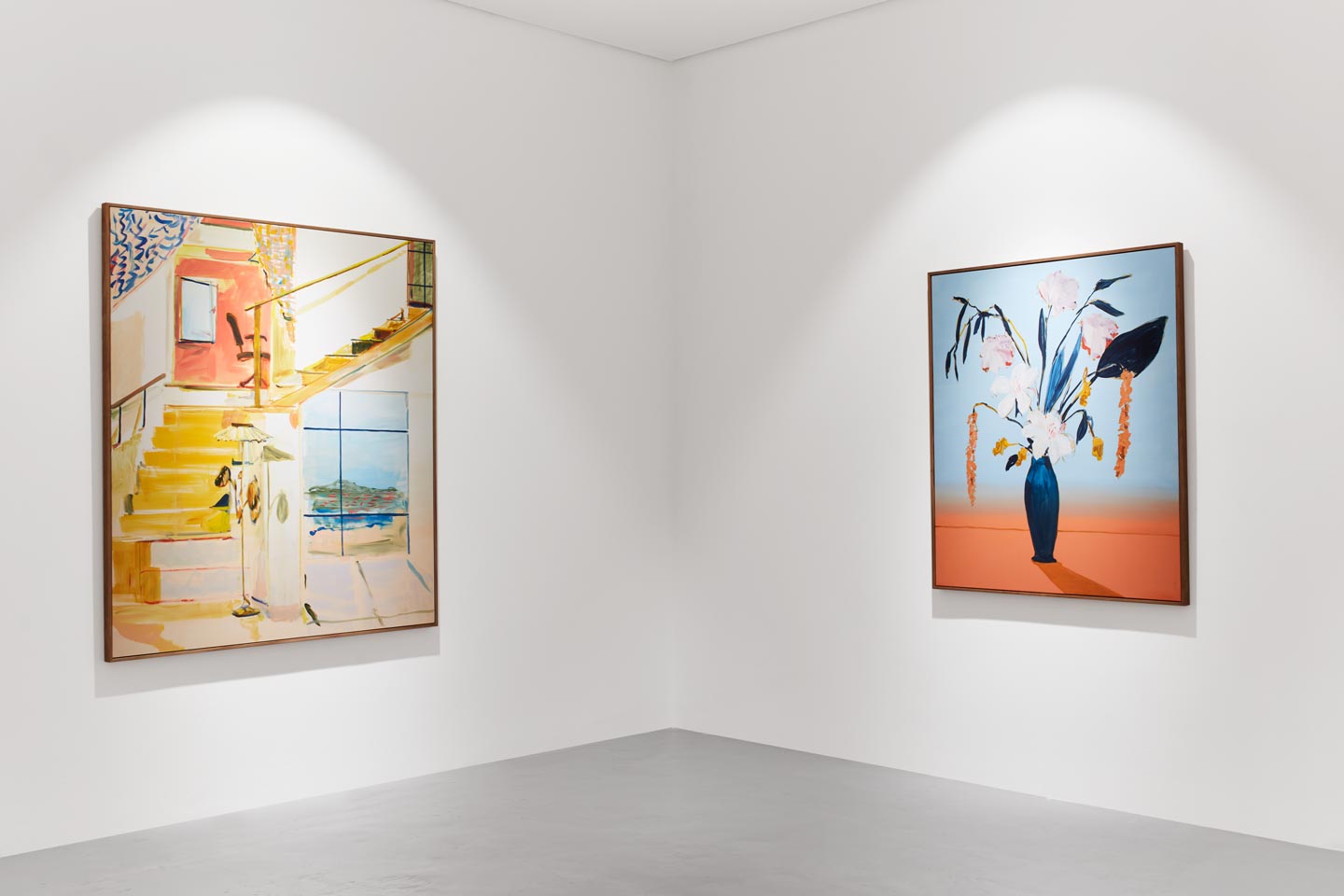 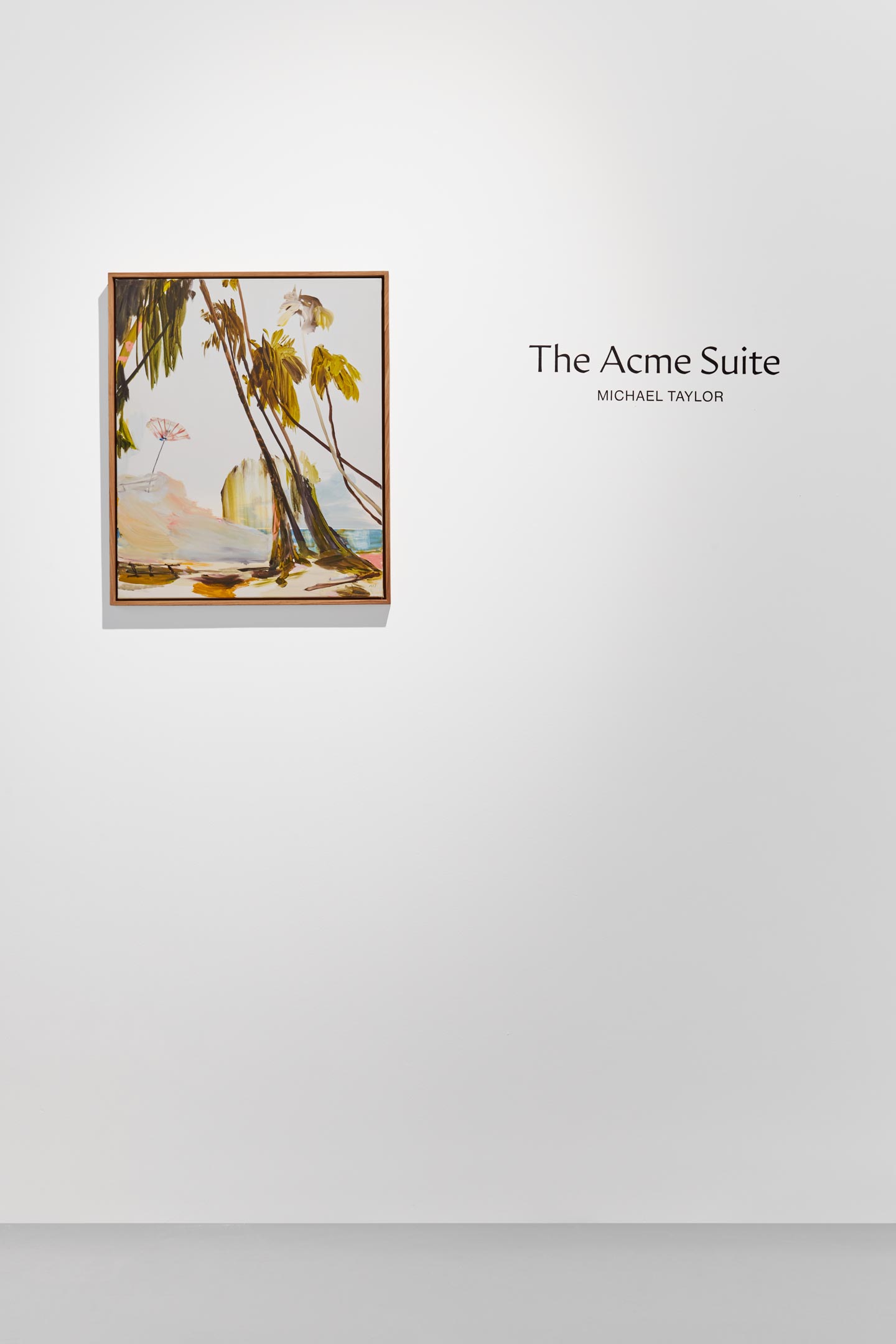 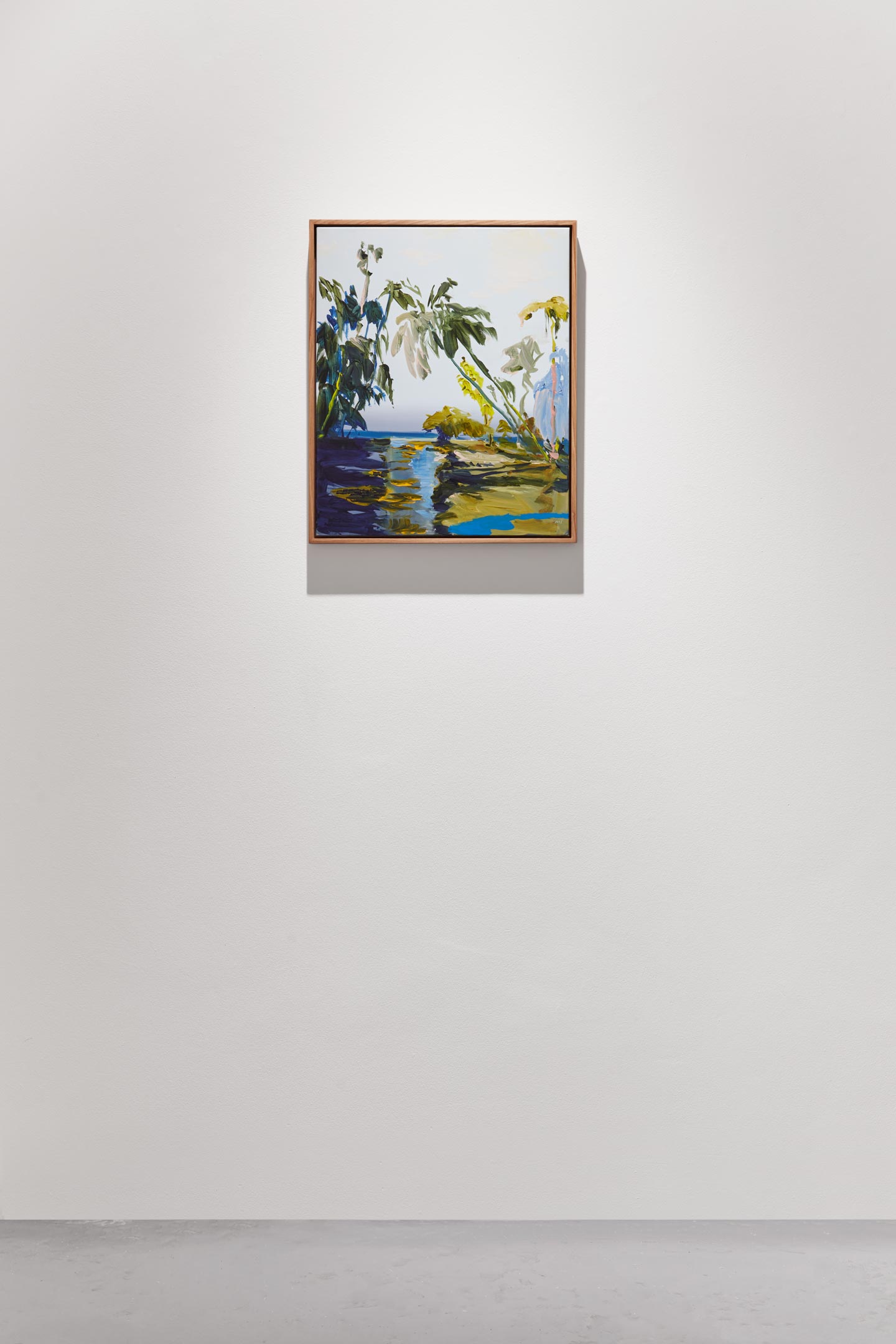 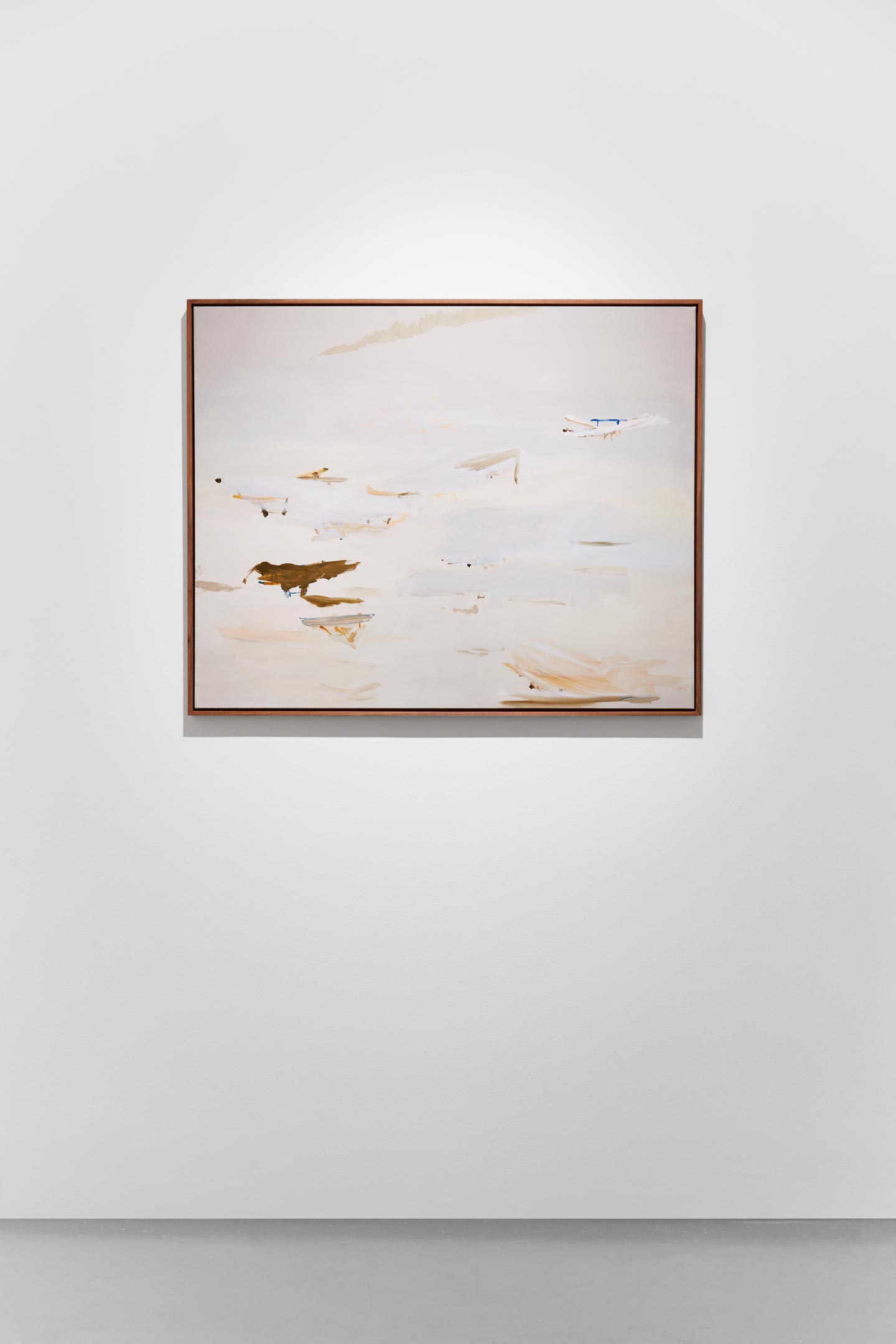 WHATIFTHEWORLD is pleased to present The Acme Suite, a solo exhibition by Michael Taylor.

“Self-ironic” is how Michael Taylor describes the title of his most recent exhibition at WHATIFTHEWORLD. Anyone familiar with the artist’s practice will recognise the satirical undercurrent that runs through most of his work and its accompanying titles: the alternately idealistic or dazed expressions on the faces of his subjects; the picture-postcard scenes whose shadows and flat bits hint at a darker or murkier reality; the interiors whose tasteful furnishings are props in the carefully curated life of absent protagonists. The intention here has less to do with humility – the capacity to recognise personal flaws or failures – than it has to do with identifying the very human tendency to imagine and project narratives onto our selves and our lives. The dark, muted and painted over sections in Taylor’s works indicate lapses in these narratives, gaps between what you remember and what actually happened, sober moments where the sunset and palm trees are revealed to be a backdrop.

As much as Taylor is interested in the showmanship, staging, projection and duplicity that constitute personhood, he is also deeply committed to the ‘picturing’ process, the manipulation of paint and other graphic media to create a narrative framework. Memory, nostalgia and the particular quality of retrospective view play an essential role in both how we see and construct ourselves, and the translation of a story, scene or character onto a canvas. The Acme Suite gathers a varied selection of paintings that use landscape, portraiture, still life and the depiction of interior space to think through narrative as an artistic mechanism and as a function of memory.

Stairs, thresholds, doors and windows frame the people-less interiors in Reveal Party and Home Theatre, creating anticipation for the action that might play out there. The paintings resemble magazine spreads, pictures of spaces where sleeping, eating or sitting down are almost unimaginable. The architectural proportions, sharp furniture and sculptural fancies suggest a kind of opulence ill suited to bodies. As in these two works, the perspective in House Sitter is of an outsider looking in. House Sitter features the blindingly white exterior of a contemporary home, complete with emerald pool, slightly yellowing lawn and non-descript modern artworks.

Palm trees are shorthand for the artist, and appear in most of these works as enduring representatives for remote islands, beach holidays and paradise clichés. Their lanky forms draw your eye upwards or askance in compositions, doing the work of staircases in the landscape. In Beach Parlour, the palms create a triangle, framing an indistinct, watery dream. The shape is echoed in The Stoic, where one pale and loosely scribbled tree in the background appears to have lost interest, or forgotten how he got here. In Spellbound, a crudely erased palm reaches across the canvas, a poor attempt to forget, or the desire to remember differently.

Erasure is most pronounced in Duck and Dive, where only one bird-like airplane has escaped being painted over by the artist. The remnants of the others are scattered across a blotchy, grey sky. The impression is that this may be for the best. The scene is far less menacing with the planes rubbed out. ‘Rubbing out’ is one of several references to graphic processes in Taylor’s work. His brushwork is more like drawing than painting. This gives the work a playful or provisional character that matches the humour in his titles, while dithering marks and impulsive lines introduce a feeling of restlessness or disquiet.

Self Portrait as the Boy Next Door is the only work in The Acme Suite with a person in it. His awkwardly composed mouth and blank stare is characteristic of Taylor’s figures, who often exude a bemused or manic energy.

Join the Club takes a light jab at the prevalence of floral arrangements in contemporary South African Art, its soft peach and bright blue background transporting it away from a real world setting. The flowers appear unconvinced, reaching upwards or painted over like their palm tree and airplane counterparts.

Linear red, blue and yellow overlays on a blurry shoreline in This Way Up remember the recent discovery by an Art Historian that a work by Mondrian had been displayed in museums upside down for decades.

Denoting the highest point, peak or absolute manifestation, ‘acme’ was used as a fictitious brand name in Warner Brothers cartoons for products inclined to fail or explode. While Taylor’s work has a distinctly satirical edge, the self-certainty or assumed authority that regularly accompanies satire is notably absent here. He doesn’t condemn or criticise those of us who imagine more resolved versions of ourselves, or those who become disillusioned when reality falls short of expectations. The world he pictures is founded on narrative constructions, countless drafts of who we are or might have been and might still become. Aspiration and the projection of ideals is an expression of personhood and perhaps even a mechanism for survival.

Michael Taylor mimics the immediate and expansive nature of the drawing process in order to develop scenes and characters in his painted work. Removed from its purely observational qualities, drawing becomes a projection of the artist’s intuition, imagination and memory. Representational and figurative elements in Taylor’s paintings create narrative frameworks that are unravelled to varying degrees through abstract marking. These baggy storylines are then fastened to titles that suggest postures, mannerisms and social codes. The titles spark moments of recognition in chronicles of masculinity, camp theatricality, personal and cultural mythology, and humanity in all its pomp and ineptitude.

Michael Taylor (b. 1979) lives and works in Cape Town. He graduated with a Master of Fine Arts from Stellenbosch University and has since exhibited in solo and group shows in South Africa, Australia, The Netherlands, UK and USA. He was shortlisted in the Thames & Hudson’s 100 Young Painters of Tomorrow in 2013 and his work is held in numerous private collections globally, including the Woodner Collection (USA).