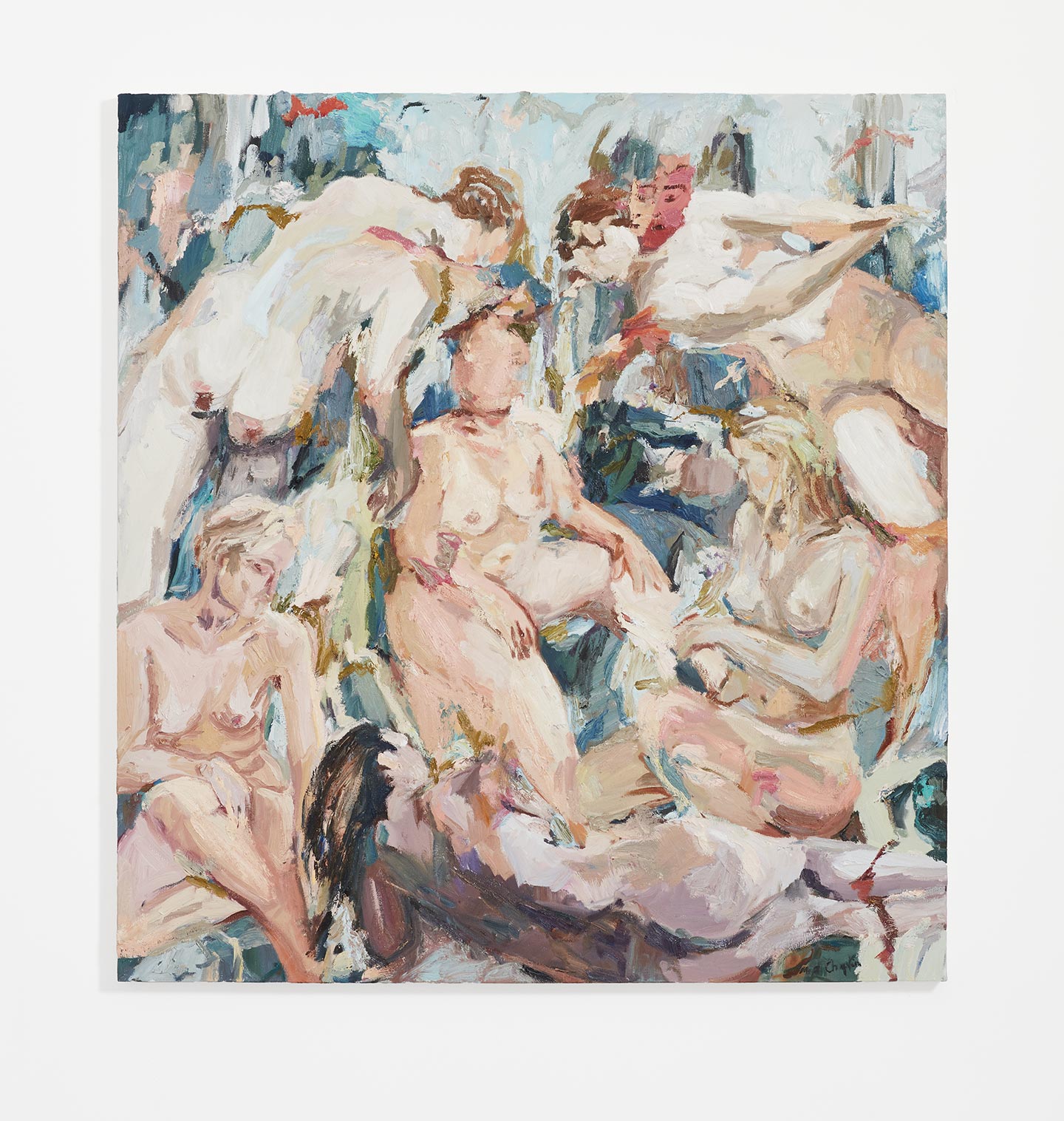 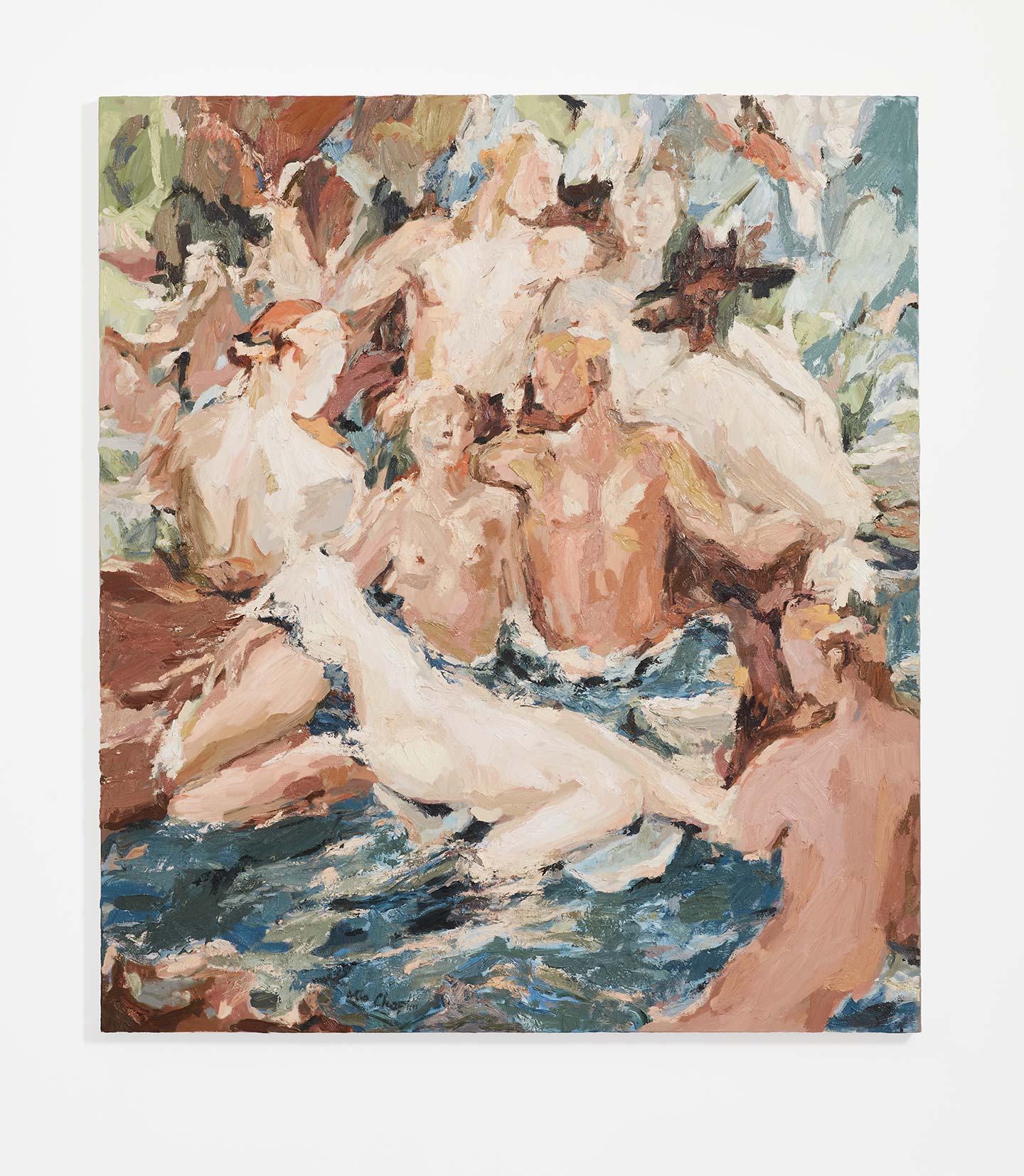 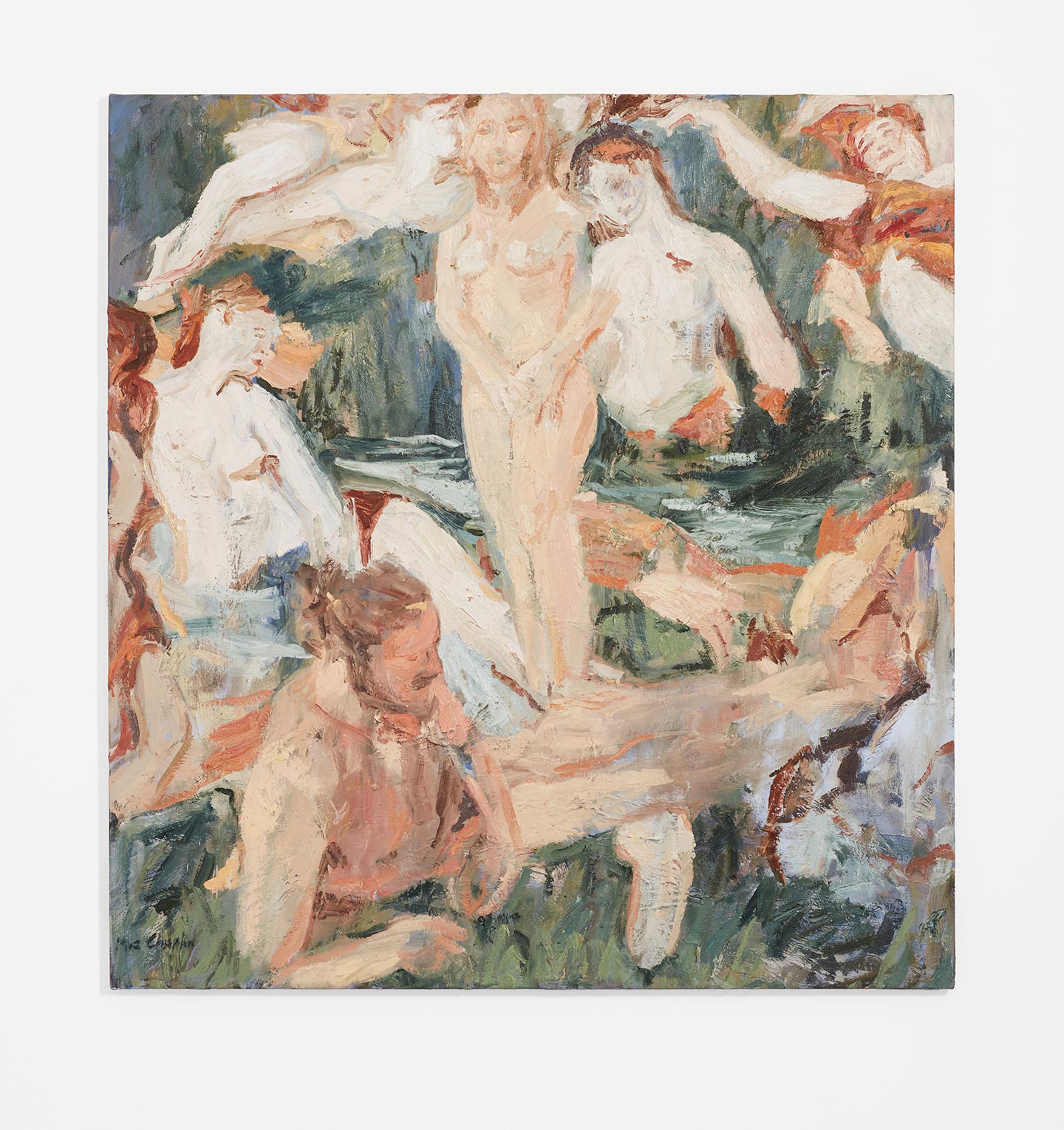 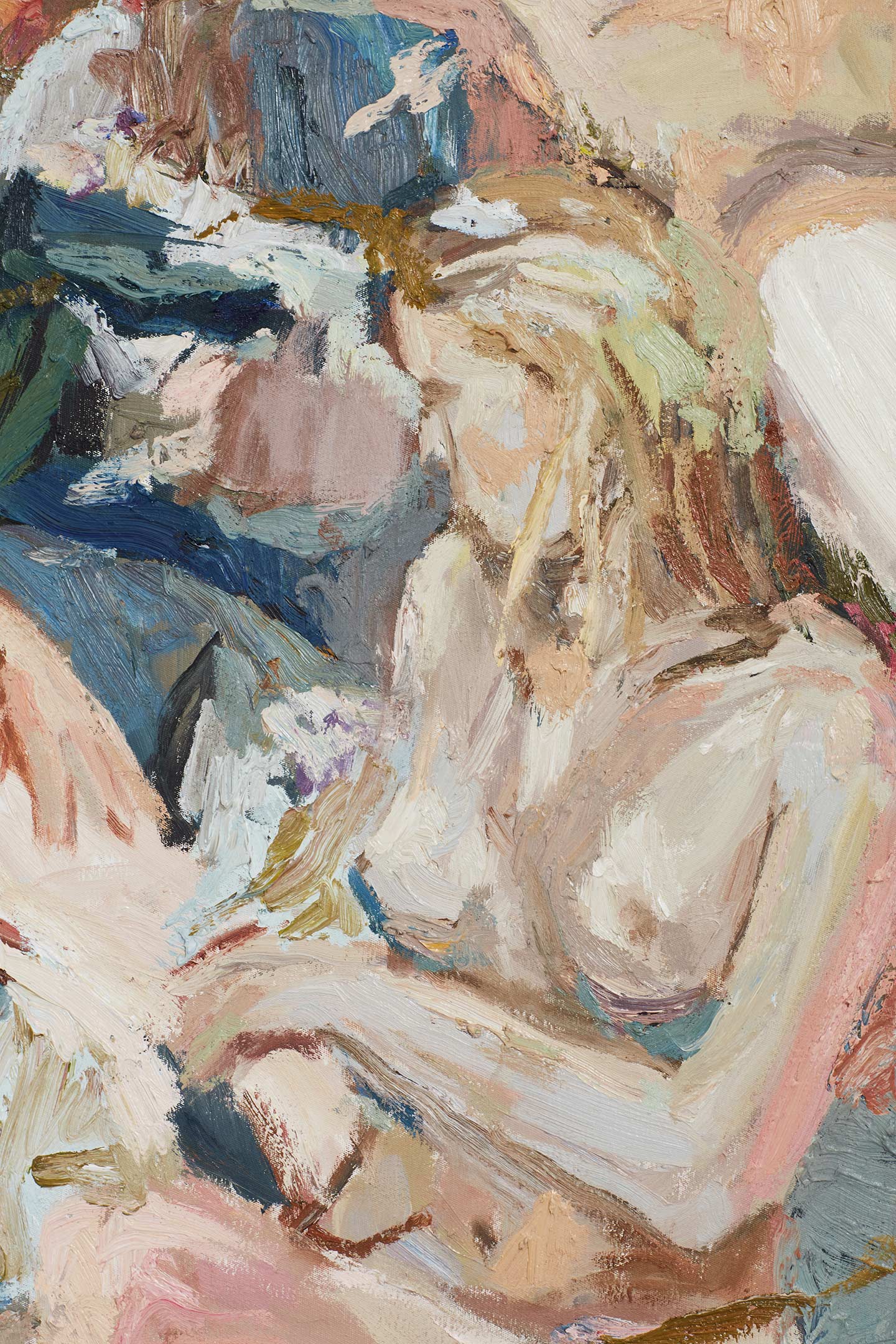 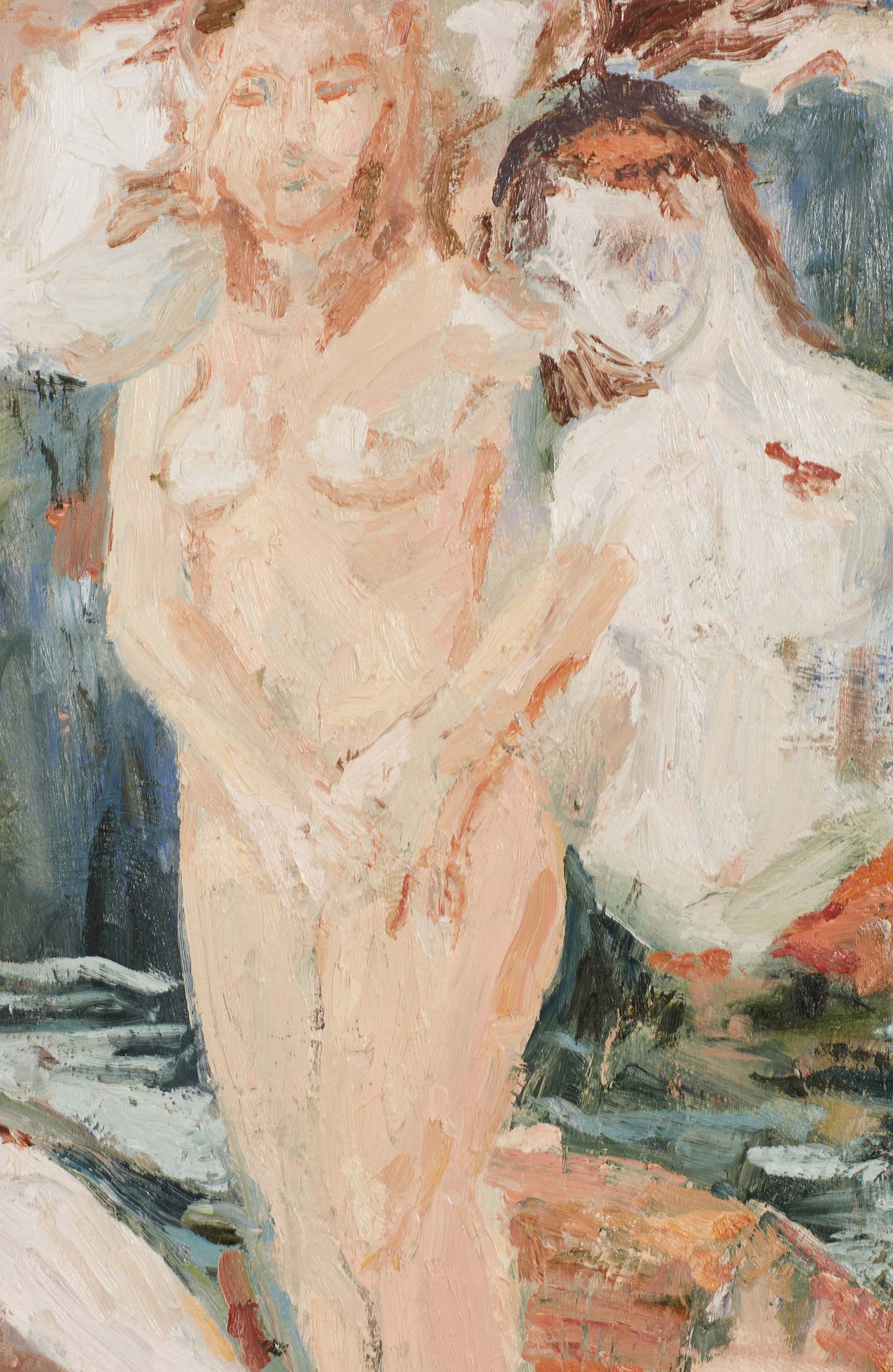 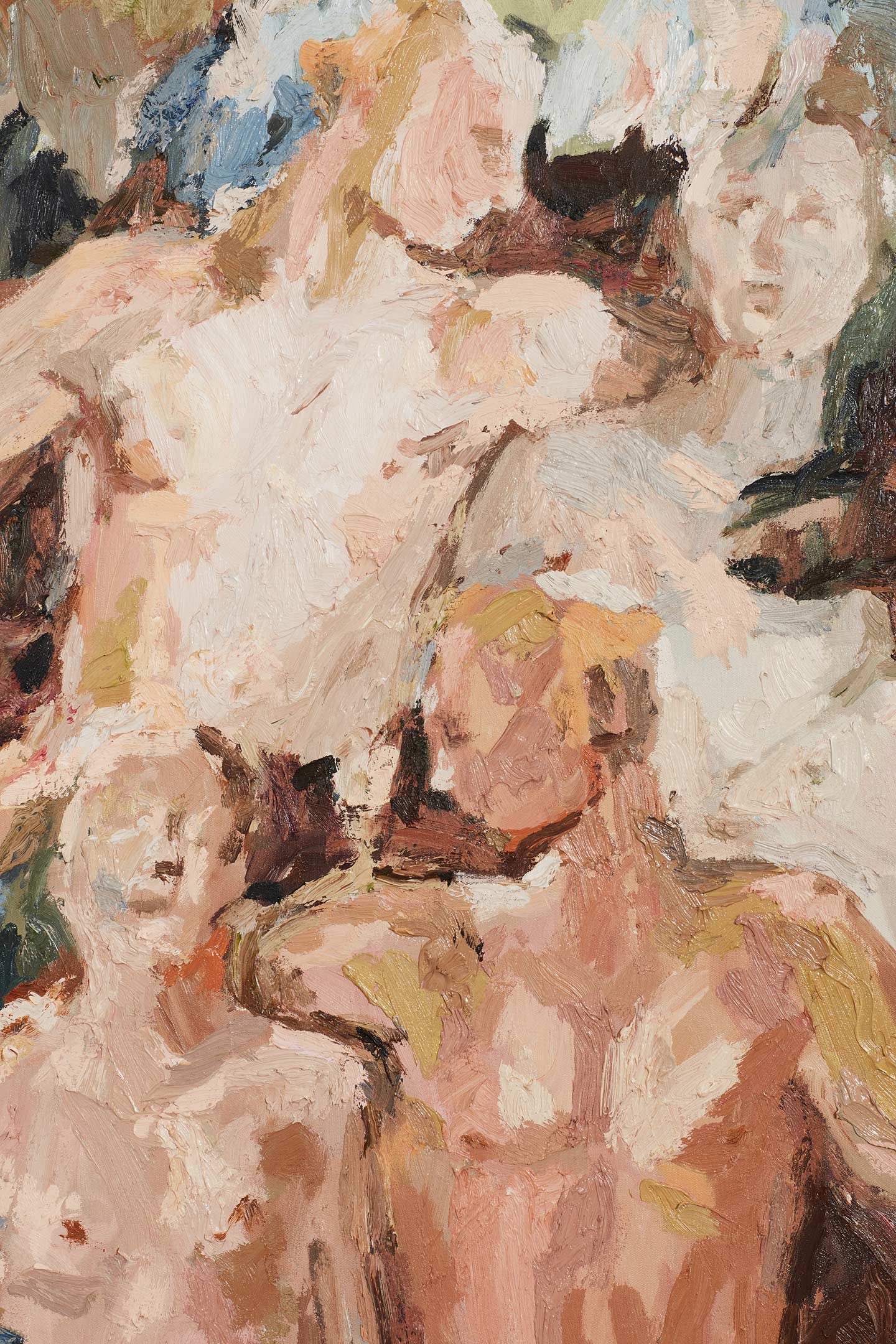 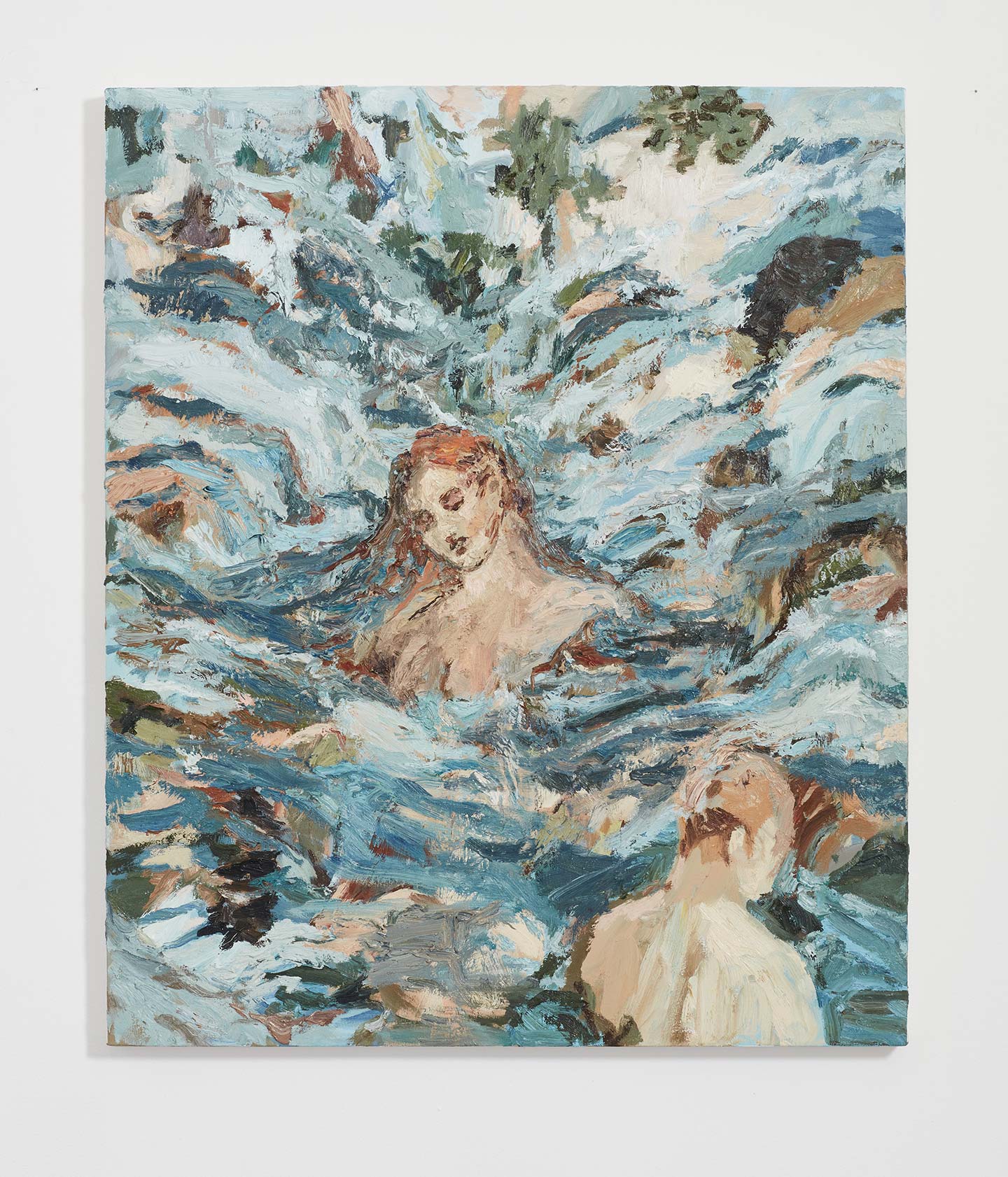 Looking For It In The Same Place I Lost It 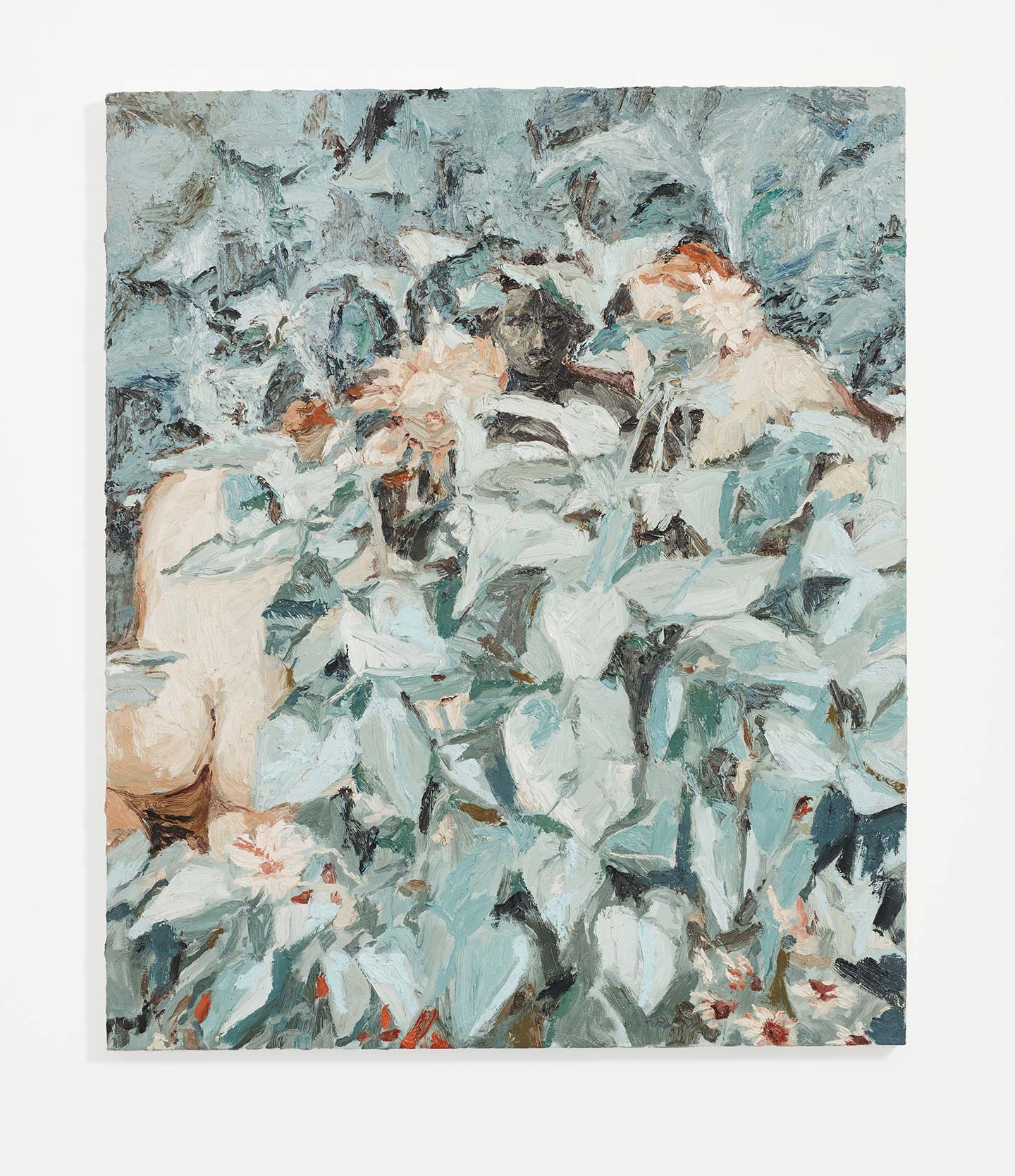 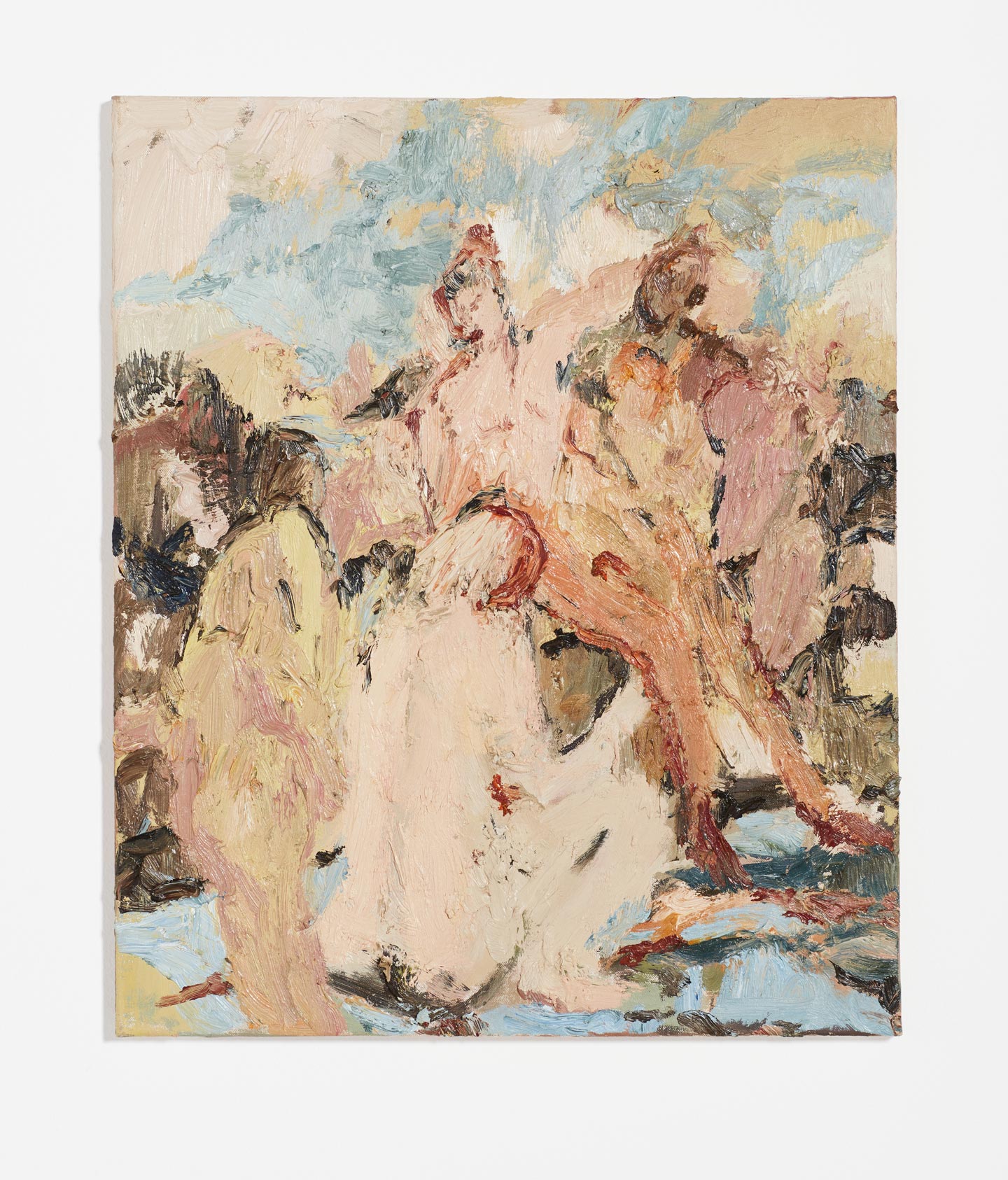 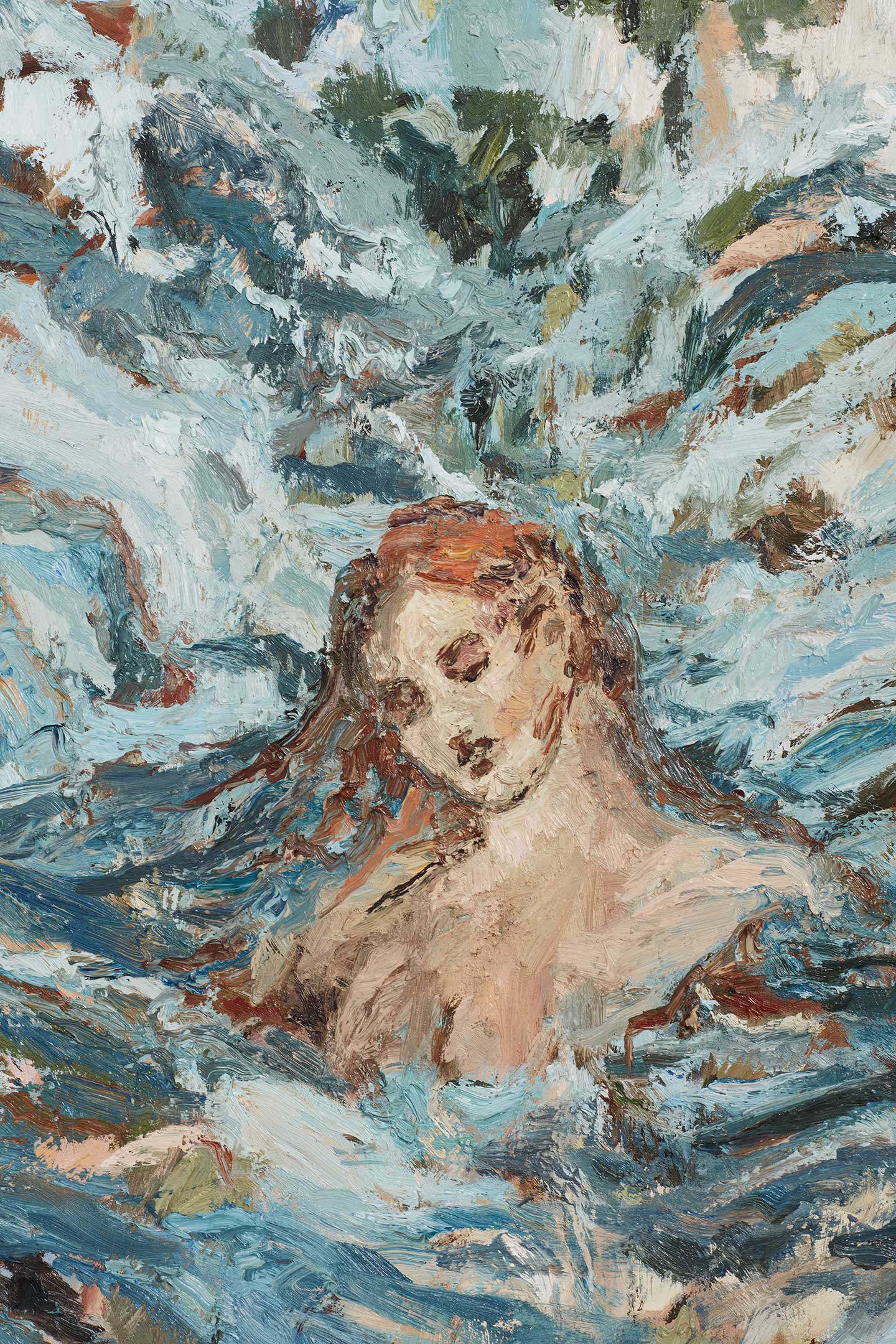 Looking For It In The Same Place I Lost It (Detail) 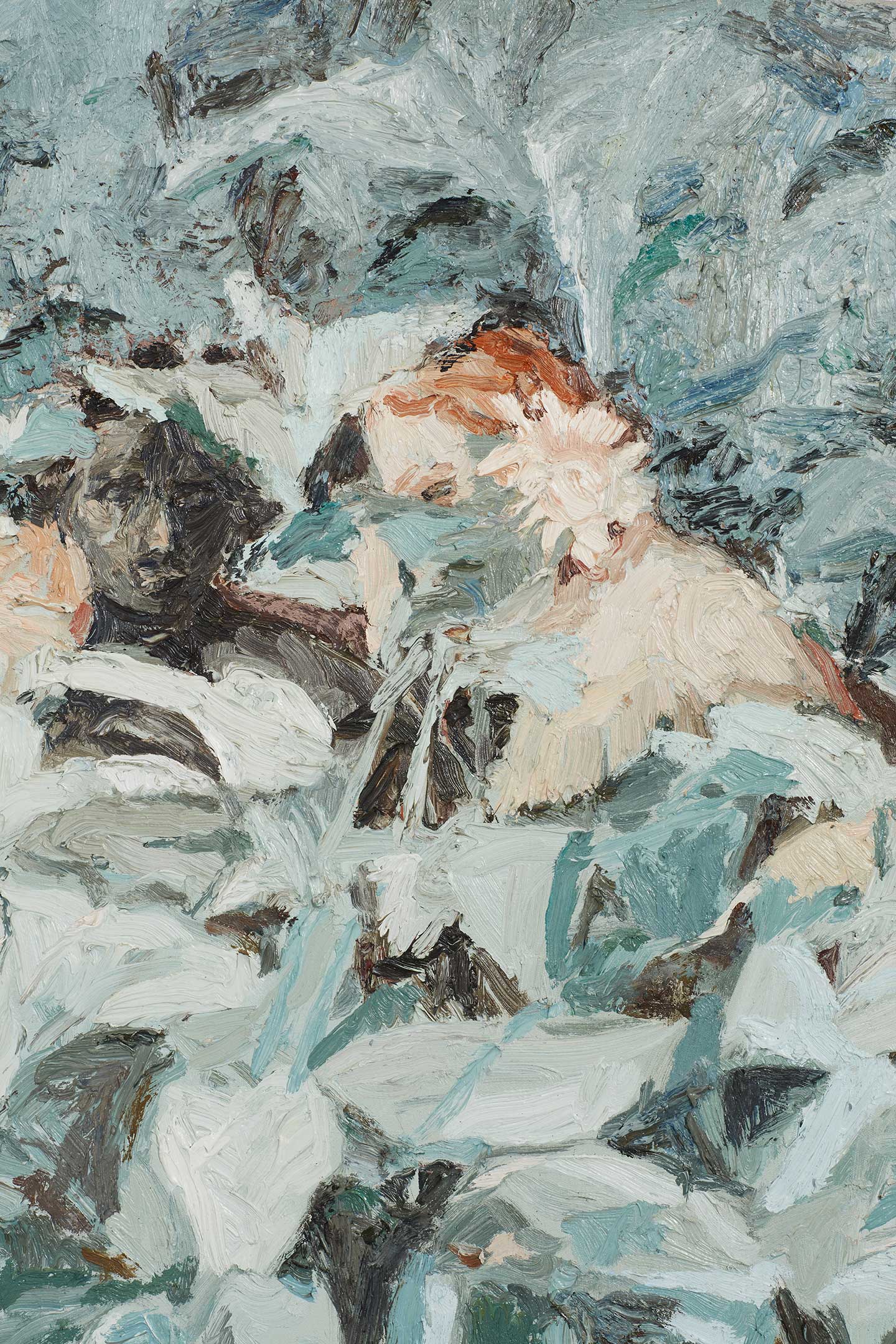 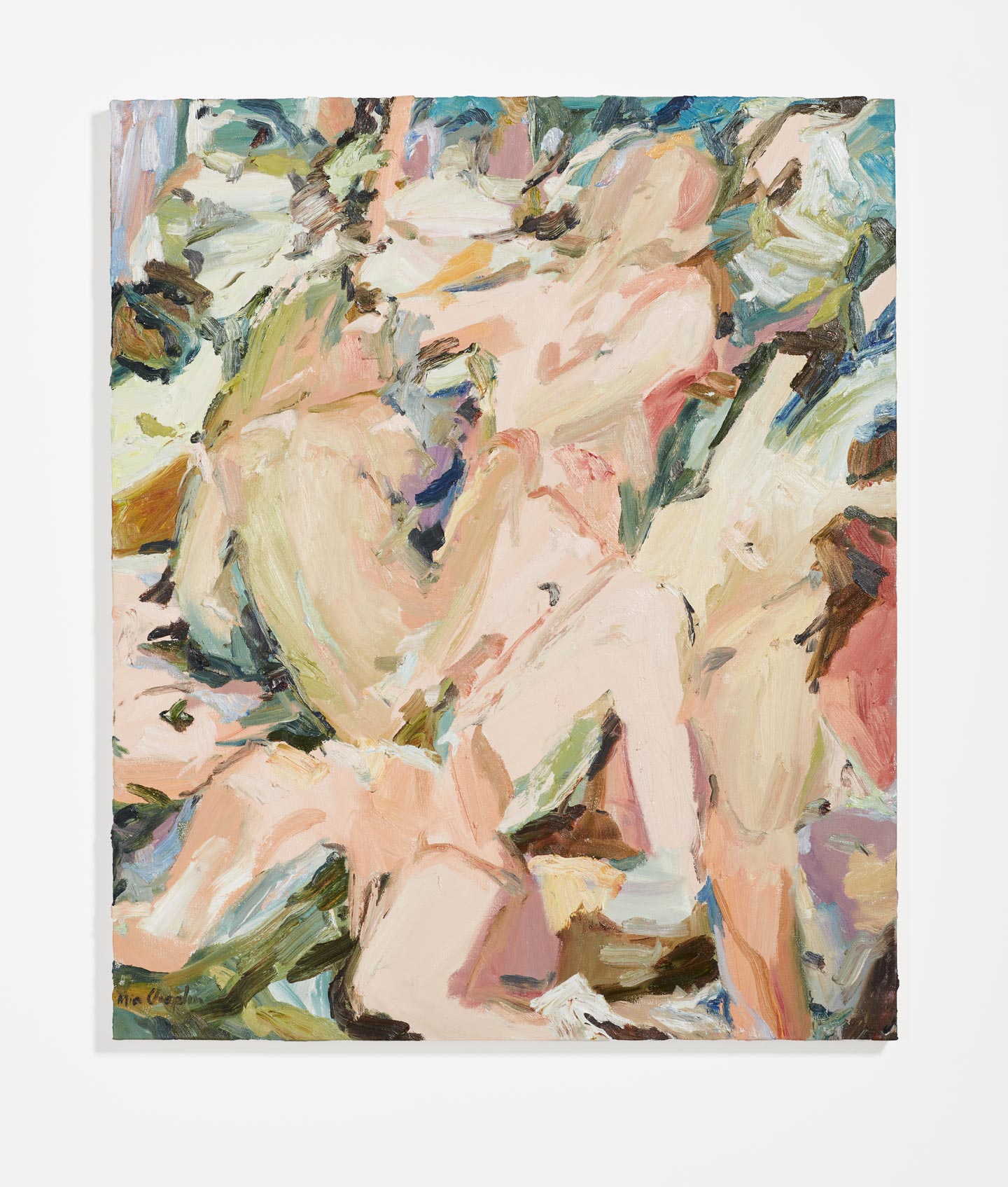 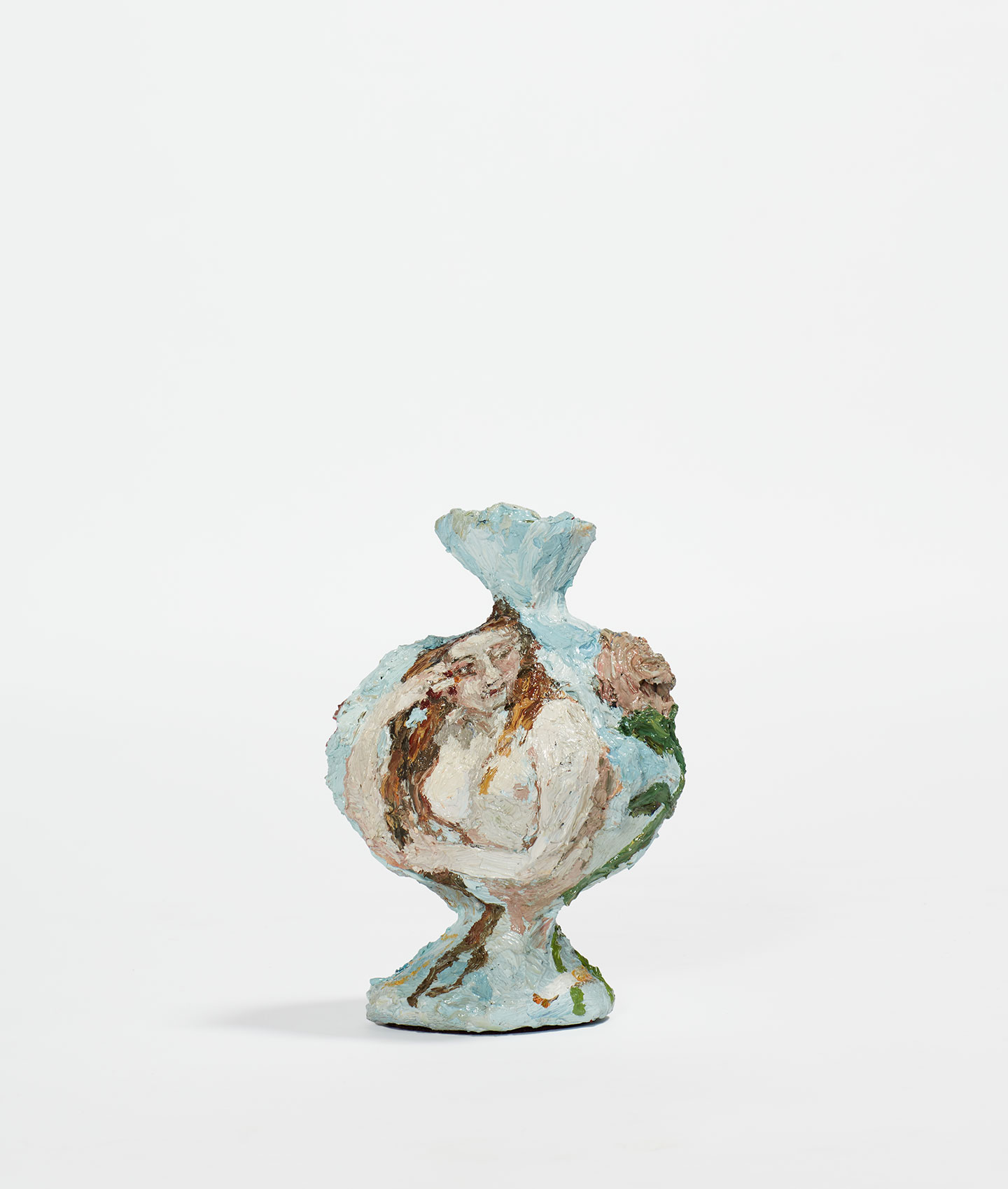 A Joke I Told That Wasn't Funny 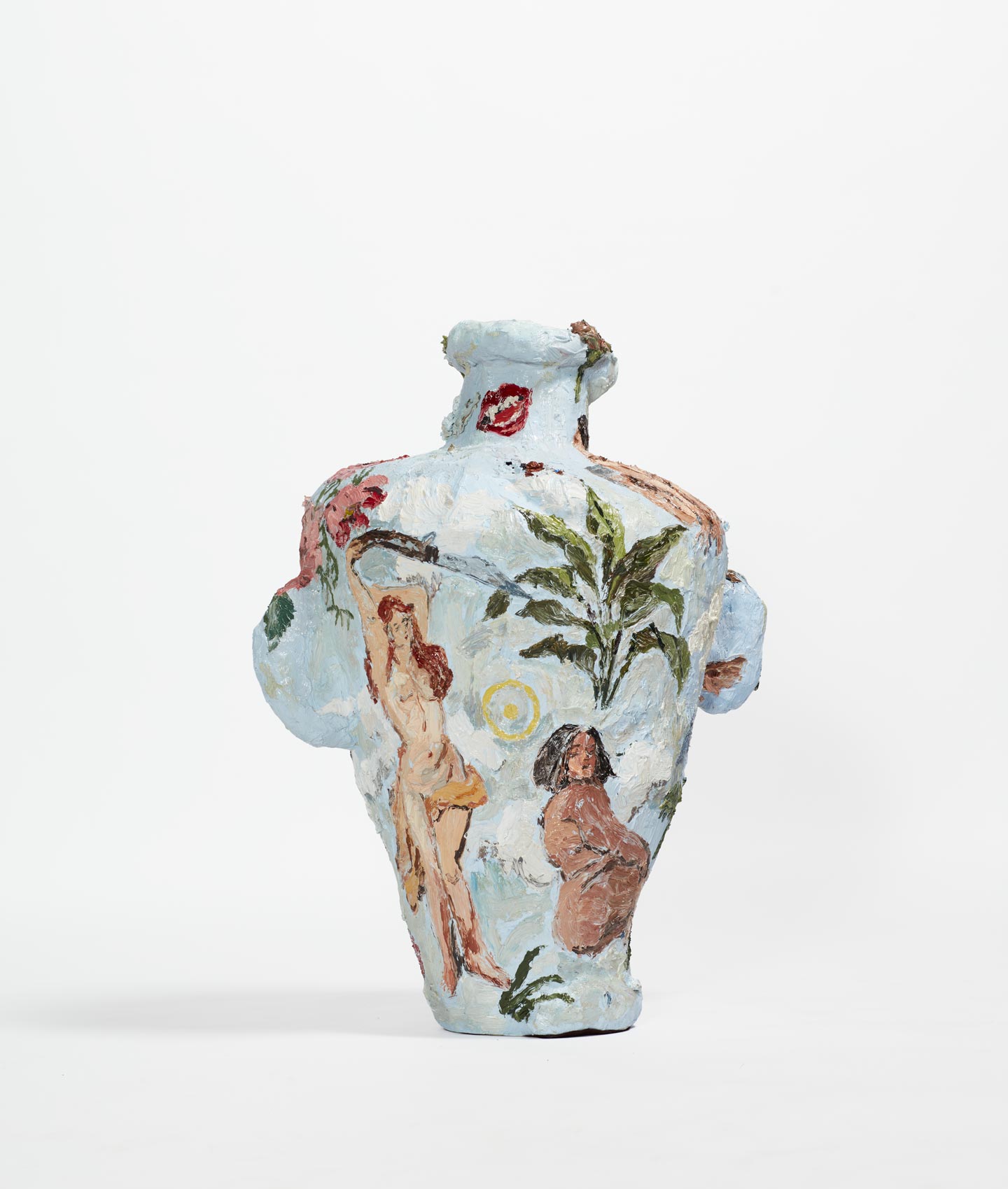 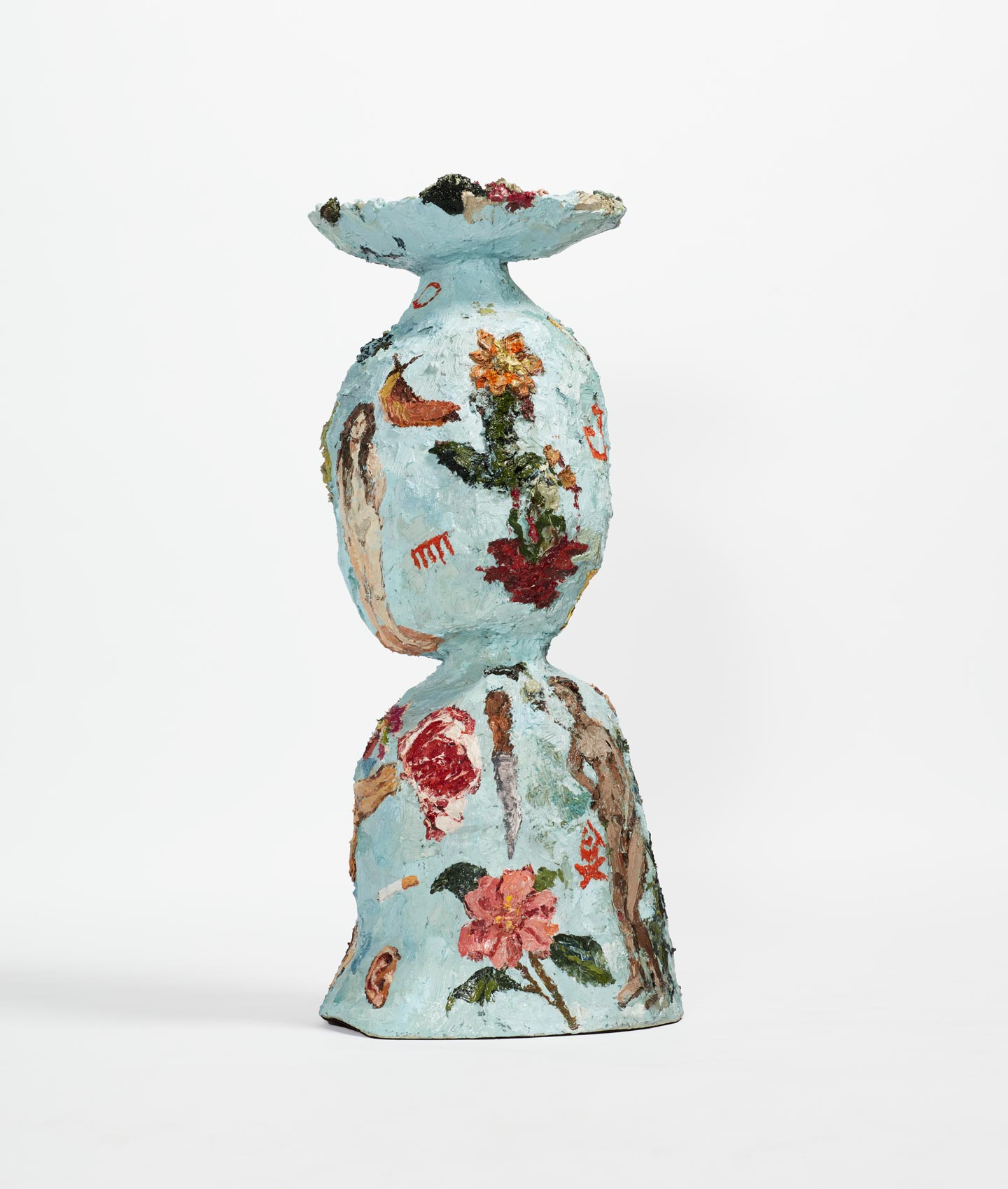 Fall Back Into Place 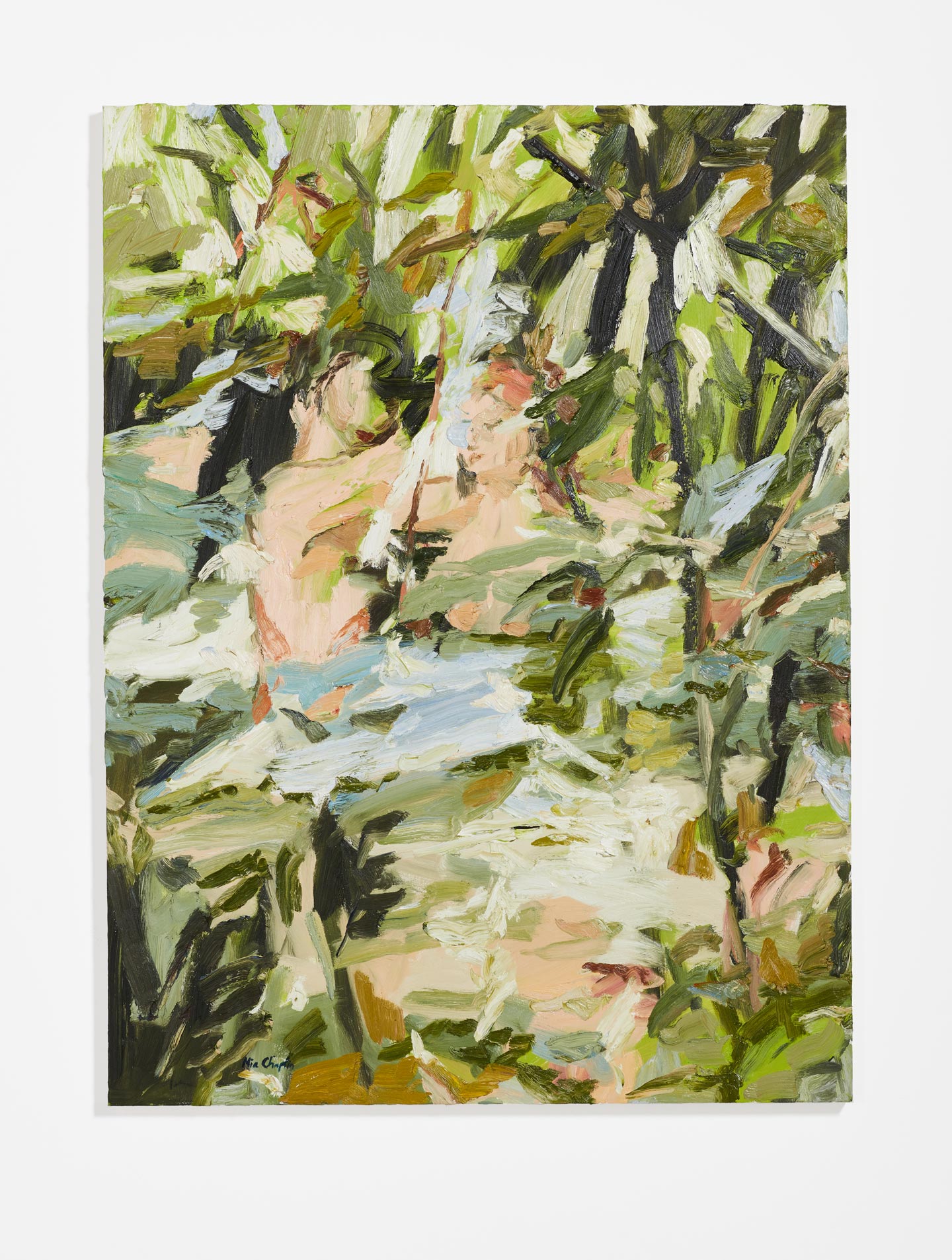 A Storm That Took Everything 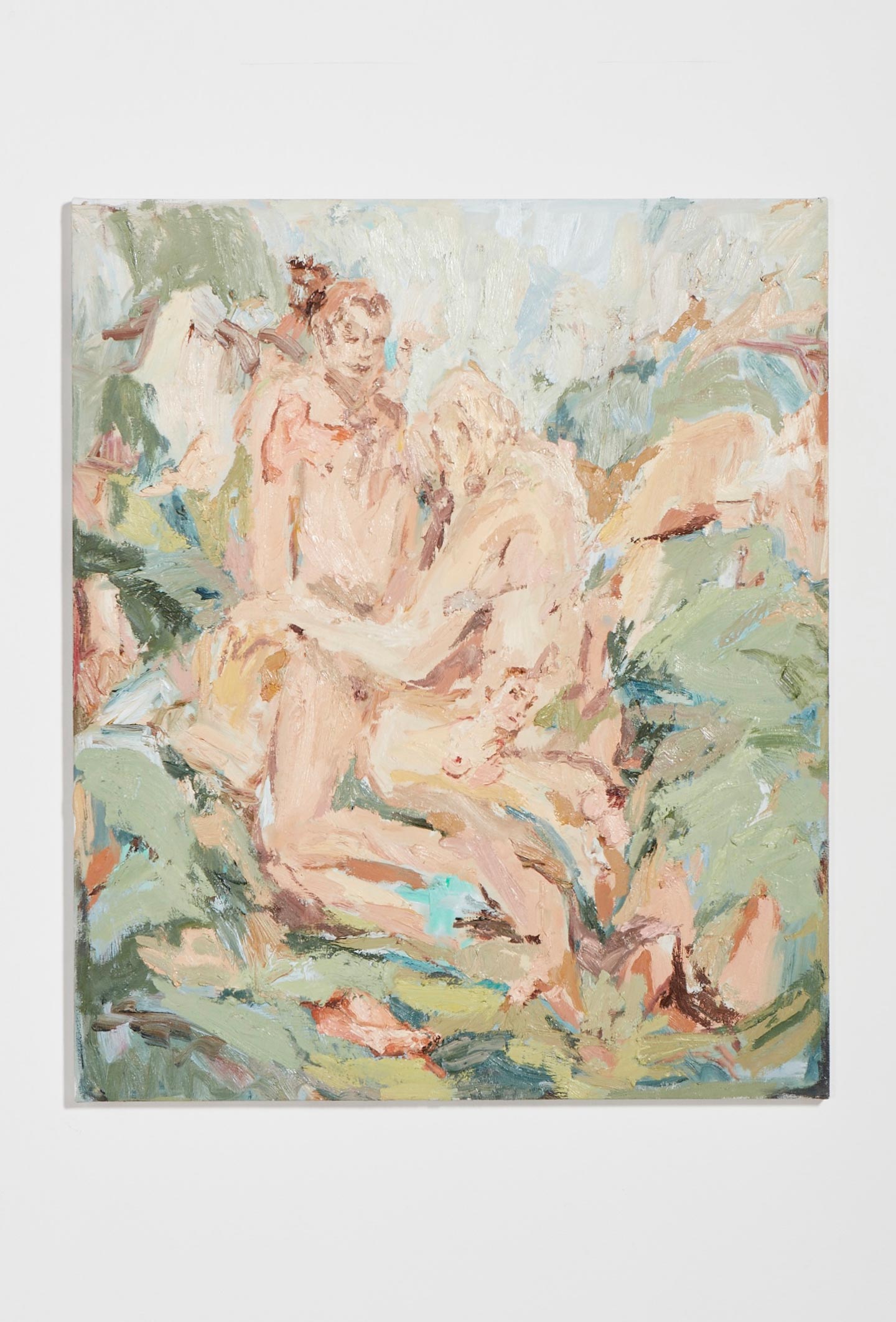 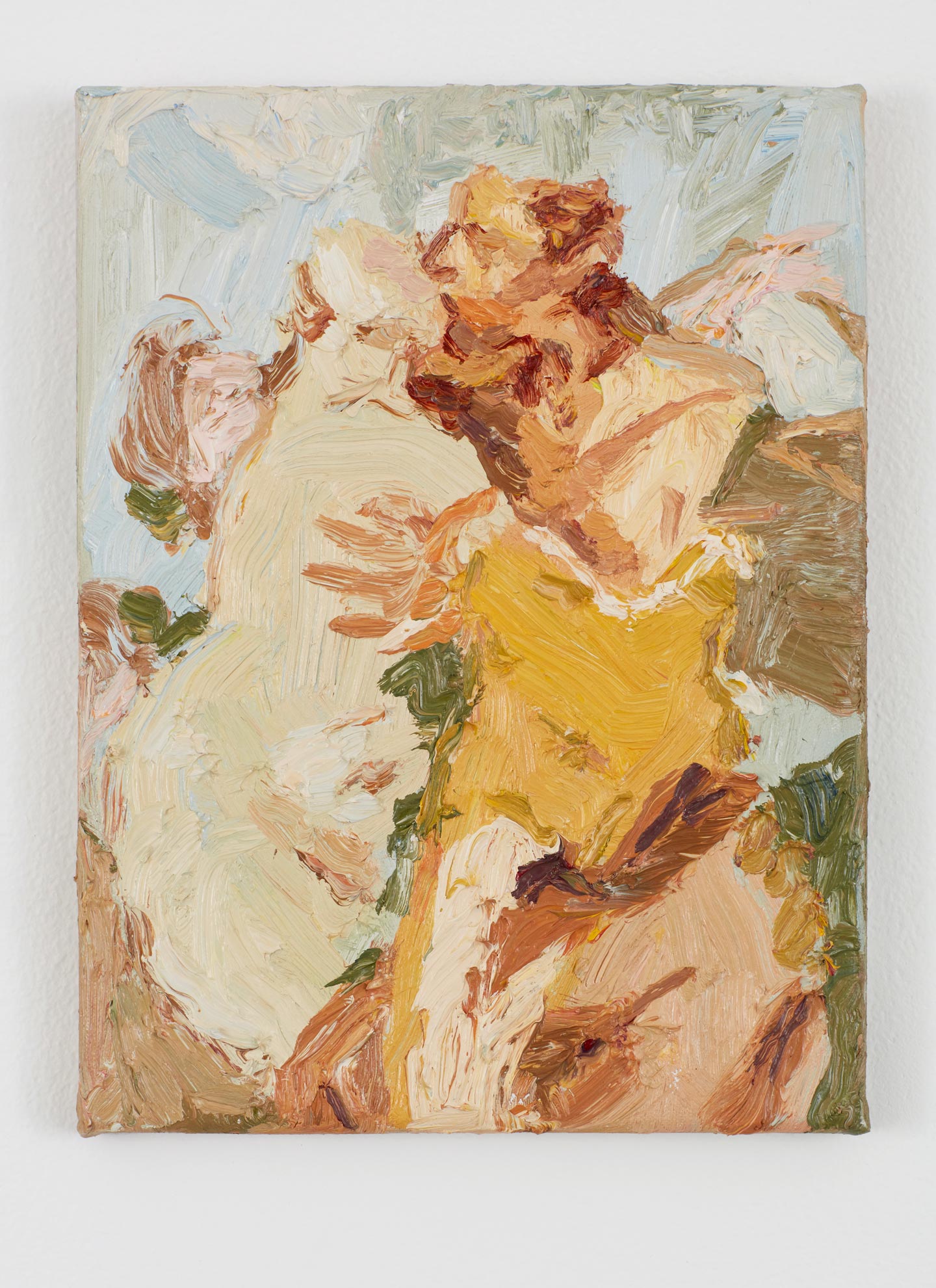 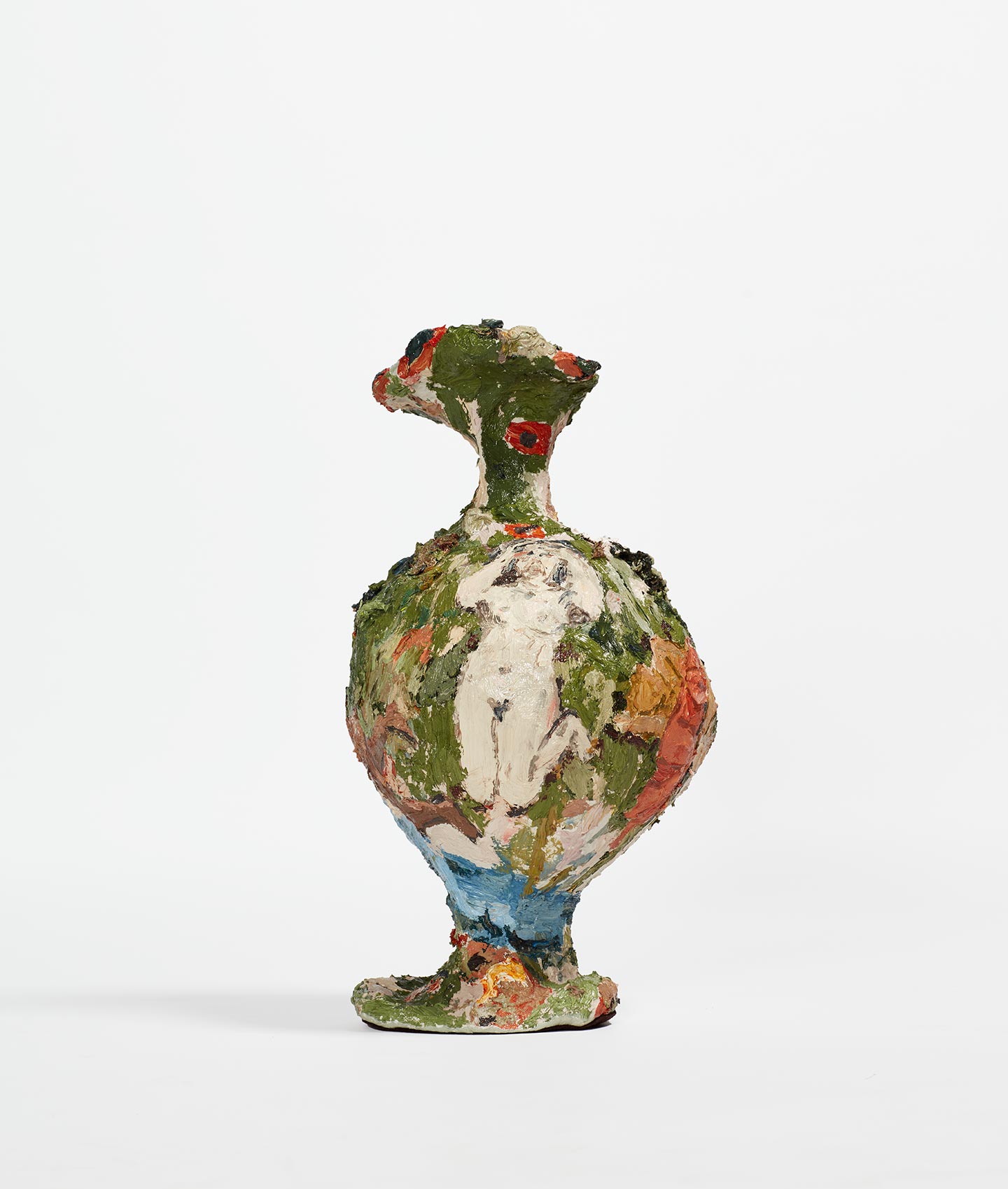 A Sharp Shock to Your Soft Side 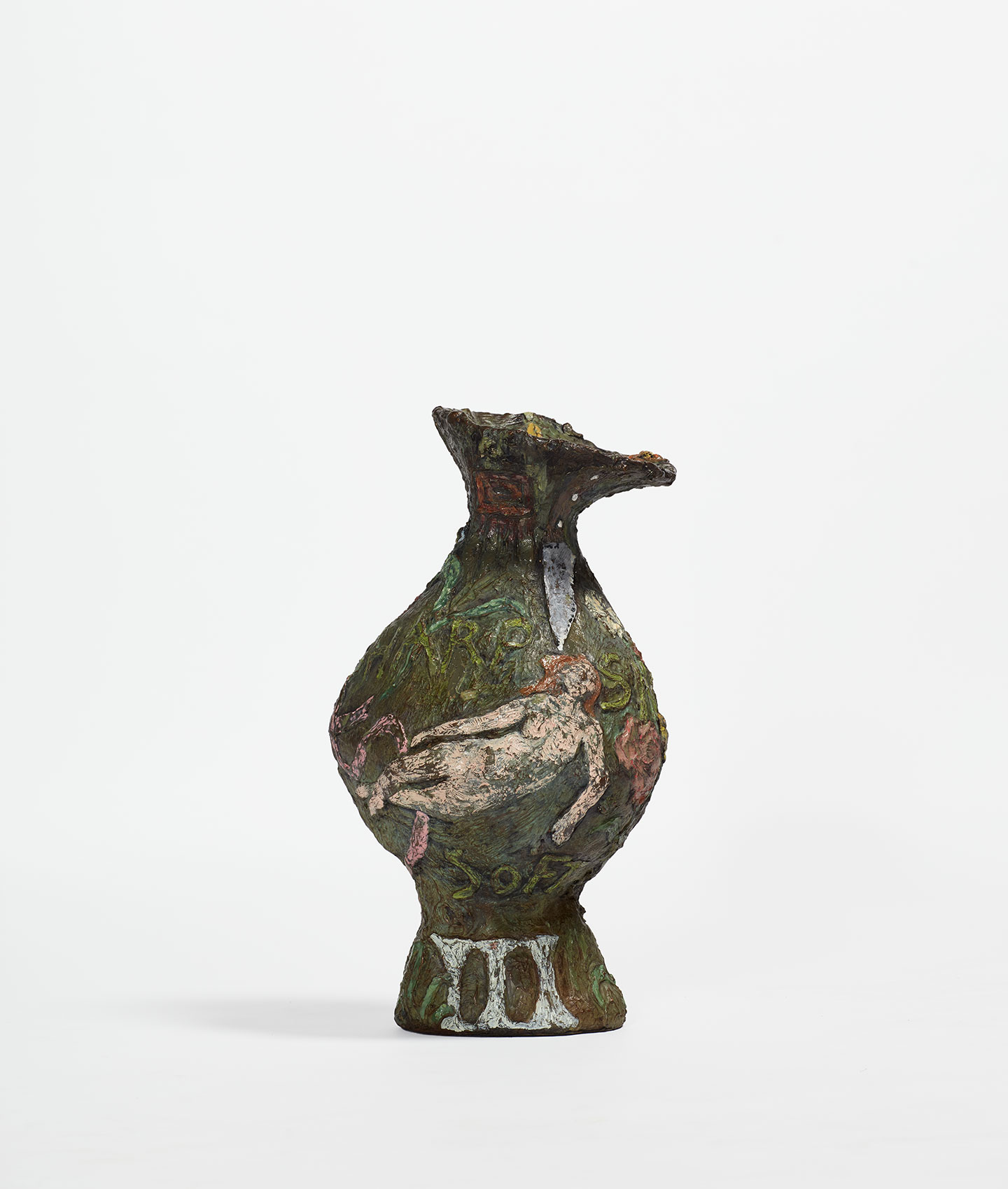 Growing in the Dark 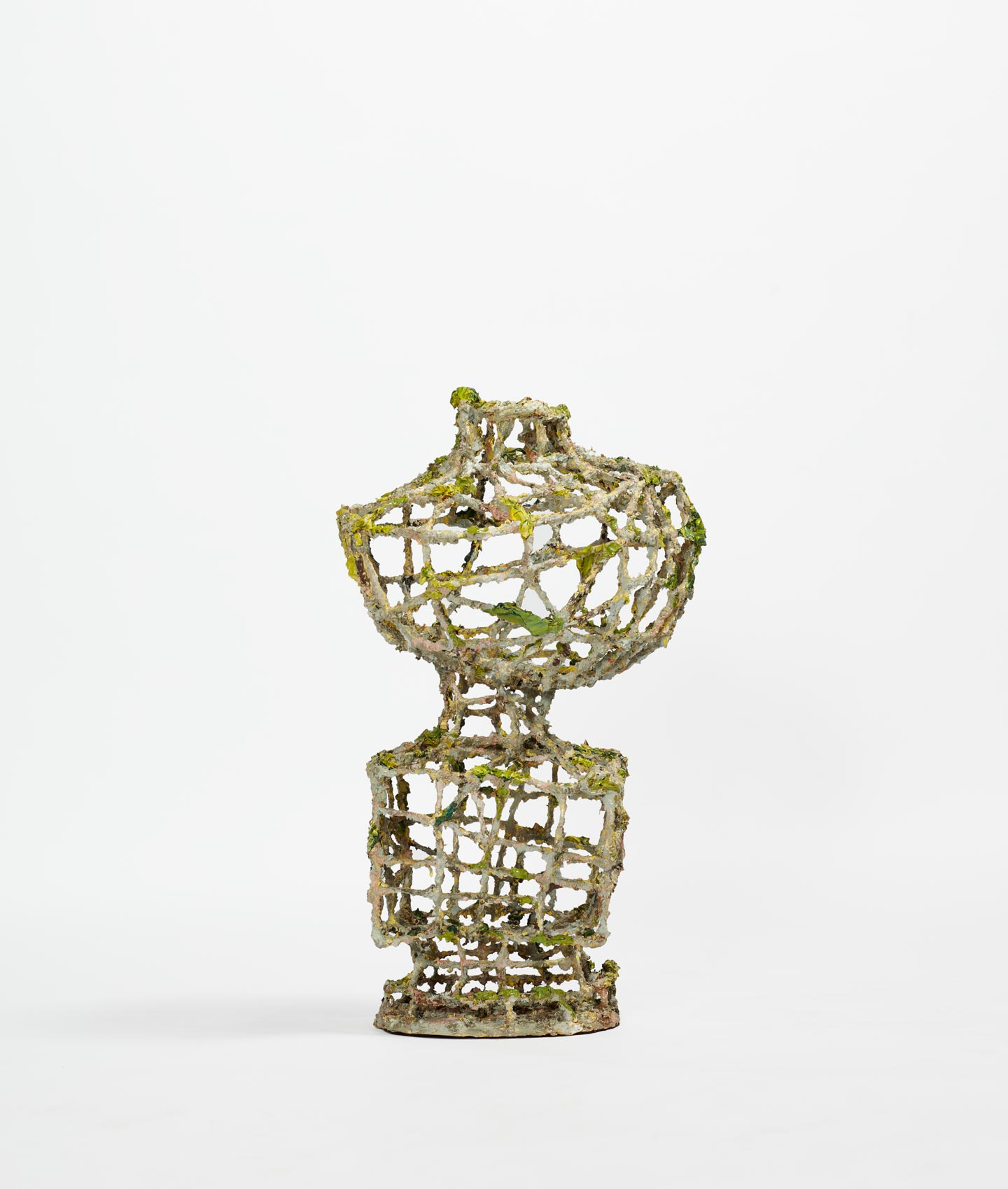 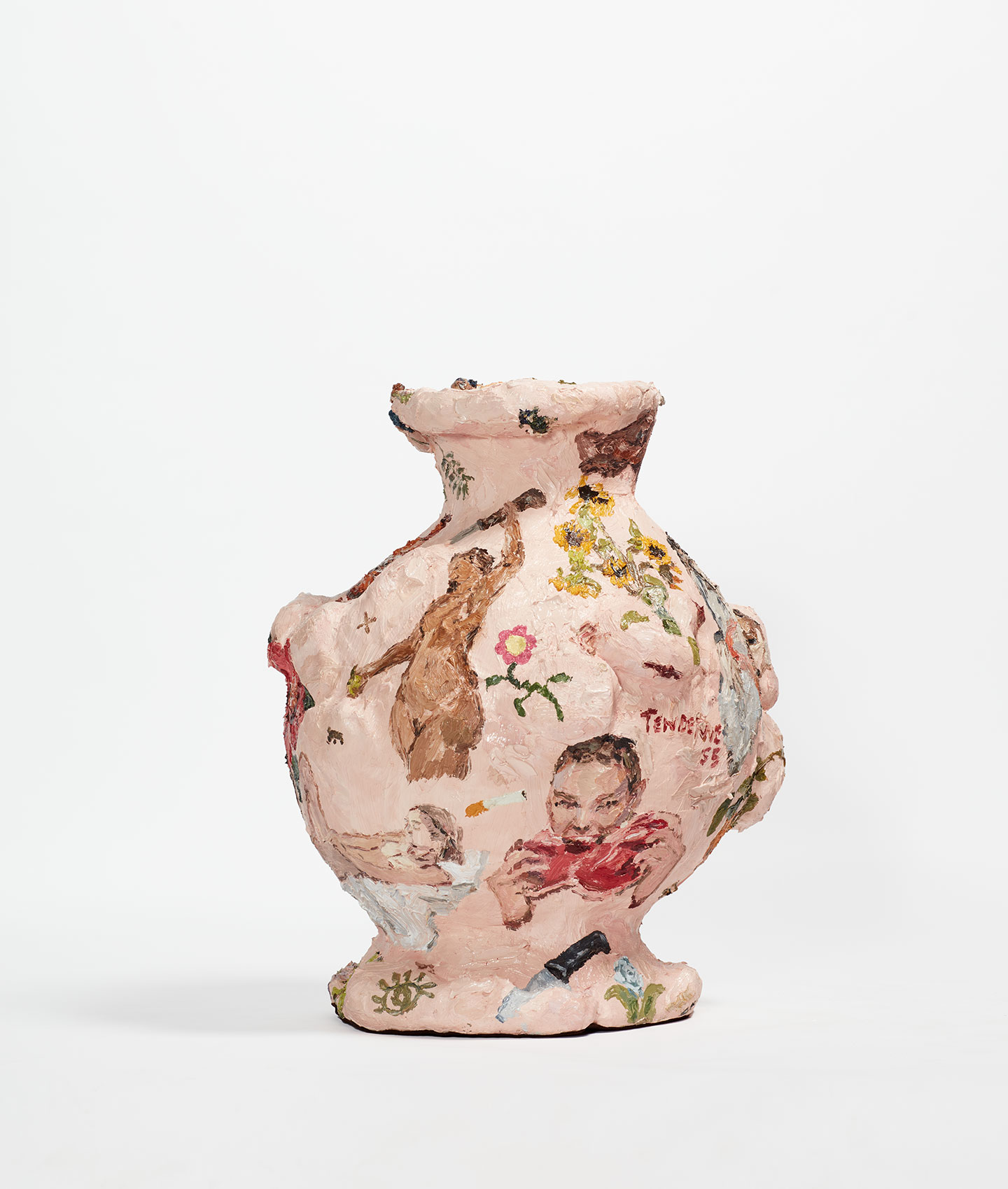 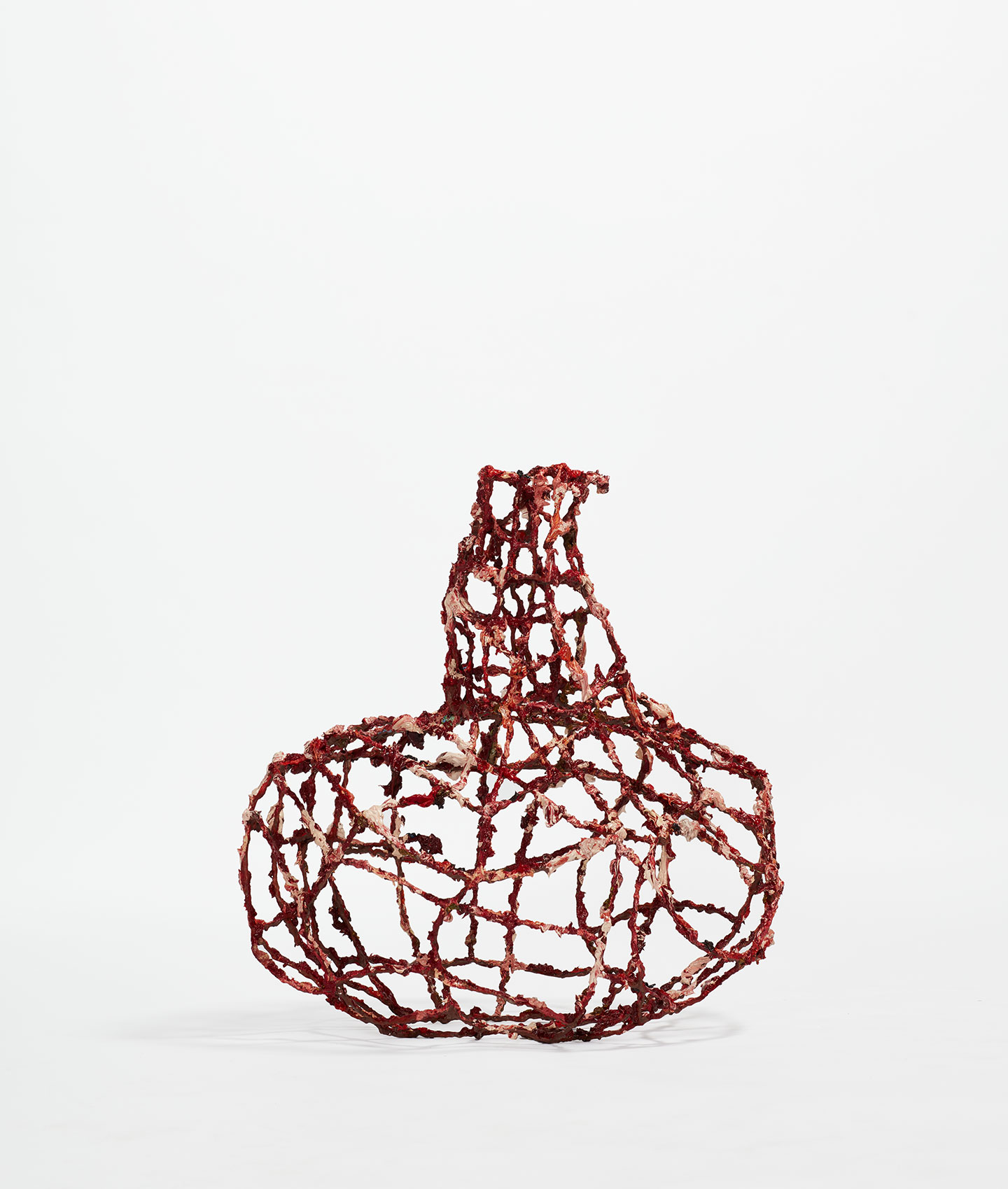 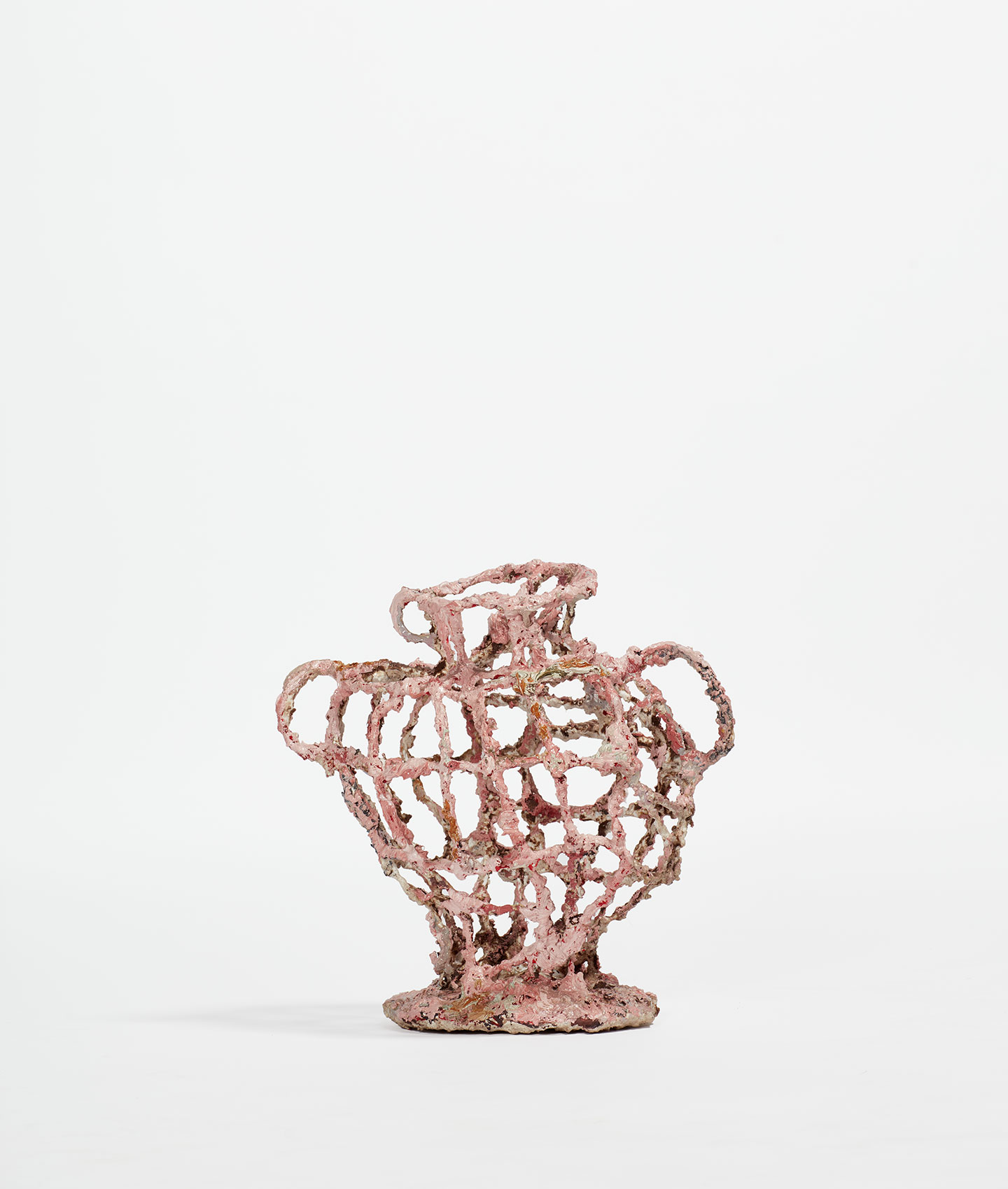 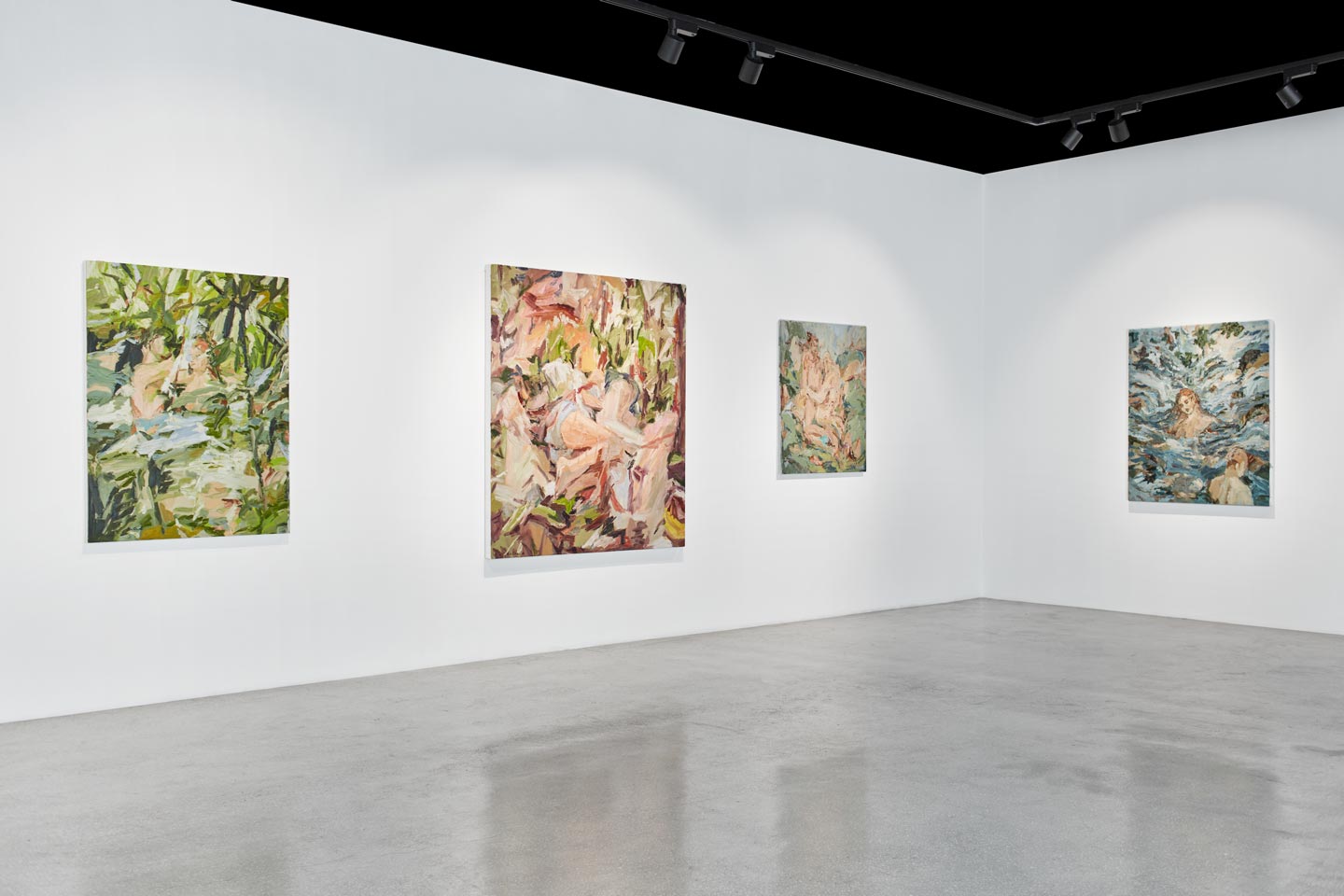 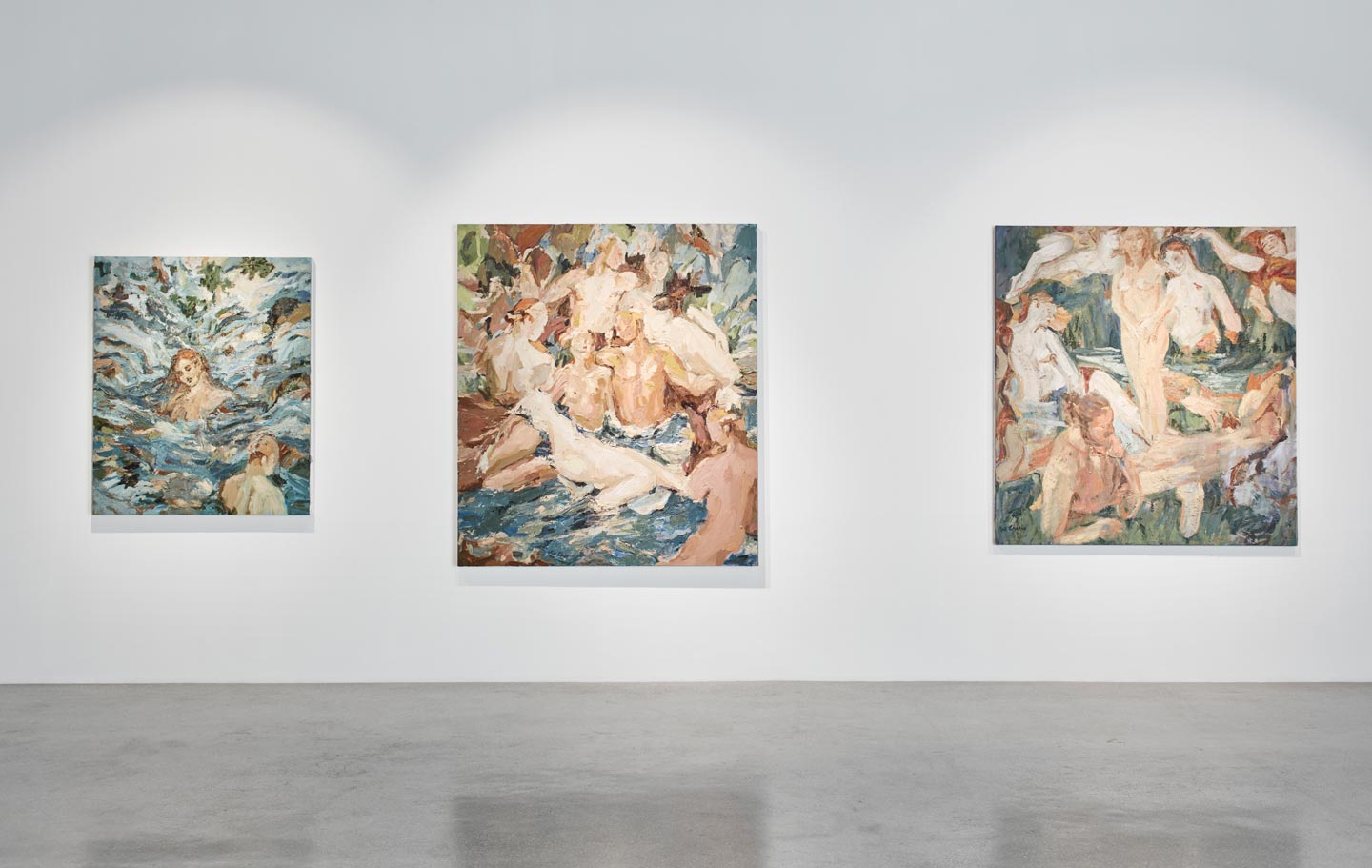 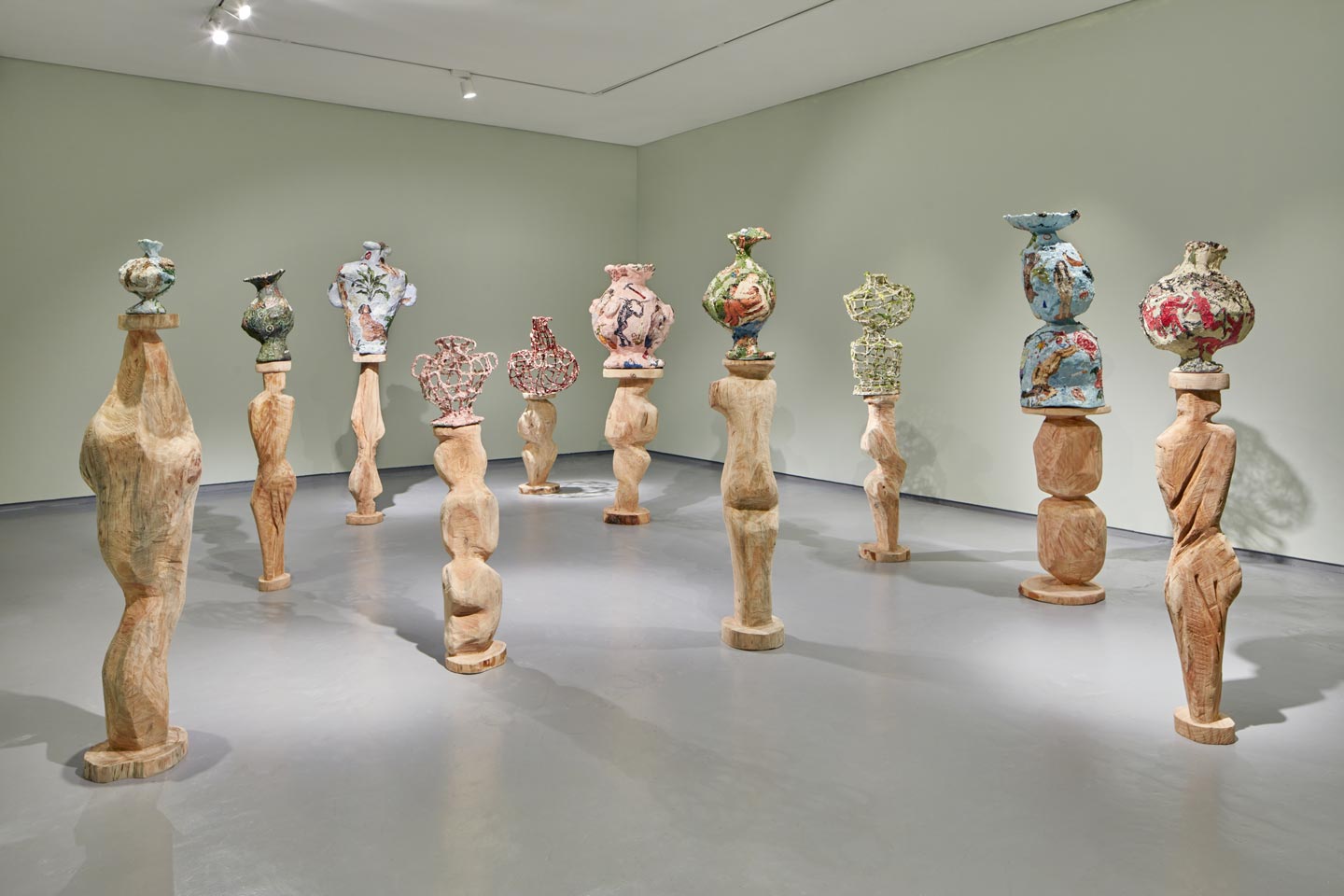 WHATIFTHEWORLD is pleased to present SWAMP a solo exhibtion of new painting and sculpture by Mia Chaplin.

A swamp is not quite solid ground, not quite flowing water. It is a liminal ecology that generates life in abundance. In the cultural imagination, swamps are the subject of much suspicion and fear – a site of immense unknowability from which any number of monsters might emerge.

We are born swamp monsters.

All human beings in history have been manufactured in a swamp which we call the womb. We are creatures born underwater: in amniotic fluid. Amniotic fluid is composed mainly of water and electrolytes along with various nutrients, urine, bile and shit. Before we are born, our embryonic mouths, noses and lungs are filled with this liquor. We breathe this water. When we are about to be born, our mother’s water breaks, forcing the liquor out of our lungs in preparation for our first encounter with the unmet world: our transition – for the first time and forever – from water to air. In birth, we emerge from the womb as monsters: writhing, howling – terribly alive. Perhaps this is the reason why legends of swamp monsters have terrified and fascinated us throughout time: they remind us, implicitly, of our amphibiousness.

Mia Chaplin’s vessels remind us of wombs. For one thing, many are the same shape and size as pregnant bellies. Although they cannot bear water, they are made in the style of water-bearers. They, like us, have learned to breathe air, not water. They have learned to hold in other ways. Mia has likened the oil painted illustrations on their bodies to tattooed skin. To me, they remind me of something more internal. The seemingly random assortment of images – mouths, ears, butterflies, knives, flowers, bottles of poison, chunks of meat –  appear halfway between a pattern and a swirling, tangled mass. Like the flora of bacteria that flourish in our watery bodies, some images get stuck inside the swamp of our interior lives and multiply. Art represents the gestation of these images. The artist as gestator; the artwork as gestatee. We are all pregnant with images; artists find ways to bear and care for them.

The way Chaplin describes the process of making these vessels feels very gestational. She coats papier-mâché over a wire frame, then layer after layer of plaster of paris bandages, then gloopy strokes of oil paint. In all, the process takes a few months, a time which Chaplin describes as “emotionally heavy.” By that, I think she means that what is generative is not easy. Creation, like pregnancy, occurs with a flooding of the internal world: memories jostling with visions, ideas afloat in the brine of emotion. What is birthed might be painful, dangerous, monstrous.

We live as swamp monsters.

Mia Chaplin’s paintings are leaky. Not just because they are blurry impasto compositions of mossy green, fleshy pink, and brackish blue. Her figures exist very much in situations of leakage: bodies interwoven, indistinguishable from one to another; bodies enveloped in water or vegetation, at one with their world. These bodies are not ashamed of their unboundedness. They are bodies that overflow. They understand that all bodies are bodies of water, that our lives play out in the multirelational soup we call the social body. Like Octavia Butler’s maxim: “All that you touch you change. All that you change changes you.” This is the politics of the swamp.

Chaplin tells me that, unlike the patience her sculptures demand, the process of painting is intuitive, impulsive, visceral. The gesture of slapping paint on canvas is similar to that of throwing mud pies at her sister as a child. Grounded in all that is slippery, squelchy and soggy, the paintings operate in the realm of feeling, not framework. To borrow the words of Ursula K. Le Guin, the paintings seem to say: “I am just mud. I yield. I do try to oblige… I am still here and still mud, but all full of footprints and deep, deep holes and tracks and traces and changes. I have been changed. You change me.” Mia’s paintings are full of tracks and traces and changes. Contrary to the masculine artist fantasy which abstracts this collective maneuvering – individualizes it, calls it genius – these paintings do not hide the fact that they have been touched, traced and changed by various influences. They are images in flux.

We die as swamp monsters.

A swamp acts like a giant sponge. Since it is largely stagnant, decomposing organic materials sink to the bottom and are buried within the sediment. Over time, this material accumulates into a substance called peat. Peat’s acids, with pH levels similar to vinegar, can conserve bodies in the same way that fruit can be preserved by pickling. Human corpses as much as 4,000 years old have been fished from these swamps with hair, skin and nails intact. They are called bog bodies.

Chaplin’s sculptures made of oil, glue and plaster and wire remind me of these bog bodies. Not the least because they have names like Orange Skeleton and Carcass – they look like they have just been pulled out of the swamp, dripping with its residue.

When I say we die as swamp monsters, I mean to say we do not die. We fester. We ferment. This is true of our physical bodies, but it is also true of culture. Ideas and images get absorbed into the sponge we might call the collective unconscious and bubble up again in fragments. We can see this process occurring in Chaplin’s paintings. Traces of Botticelli’s Birth of Venus appear in Shipwrecked. Piètas abound in different reconfigurations in works like Shark Bite, Soft Landing and Deboning a Fish. The submerged face in Sleeping Deep pays tribute to Millais’ Ophelia – Ophelia, another corpse pulled from the swampy deep.

She shows me the Photoshop collages she uses to sketch out the paintings. References – personal, historical, digital – are layered one on top of the other, like layers of sediment. The final product looks like a glitch. The images have decayed. Rotted. Mutated into something new. The process of painting becomes a process of fermentation. This, I thought, is a good metaphor for art history as a whole. Art history not as a timeline upon which various movements can be pinned, but a collective psyche from which various actors draw inspiration. Artists dip in and make form out of the void. But at the end of the day, we’re all participants in this ecology of images. We are born, we live, and we die in this swamp.

Mia Chaplin (b.1990 South Africa) is a painter who lives and works in Cape Town. Working in oil on canvas and paper, her highly expressive works are characterised by their rich impasto surfaces and visible brushstrokes. Chaplin’s most recent works emphasize a muted colour palette of pink fleshy tones and golden highlights. Consisting of still lifes, figure studies and landscapes, her work seems to meditate on the familiar. Her loose, erratic style of painting – synonymous with that of the impressionists – is intuitive, heightening the emotionality of her pieces. They communicate a sense of estrangement; reflecting a detachment between the self and her surroundings. Her works sway between voyeurism and intimate interaction, while remaining consistently self- referential.

Since completing her BFA at the Michaelis School of Fine Art in Cape Town in 2011, Chaplin has hosted five solo exhibitions, Mouth (2018), Under a Boiling River (2017) and Binding Forms (2016), with WHATIFTHEWORLD and most recently, Twister (2021) and Underbelly (2019), with No Man’s Art Gallery in Amsterdam. She has furthermore extended her painting practice into printmaking, hosting a mini-exhibition of monotypes from the series, The Making of a Sharp Blade (2017), in collaboration with Warren Editions, Cape Town. Chaplin has completed artist residency programmes at Cité Internationale Des Artes in the Marais district, Paris (2018), Nirox Arts Foundation in Johannesburg, South Africa (2016) and at OBRAS Foundation in Alentejo, Portugal (2015).