I - 'Under the deep wave, boldly diving, we find the yellow pearl hidden from other eyes.' 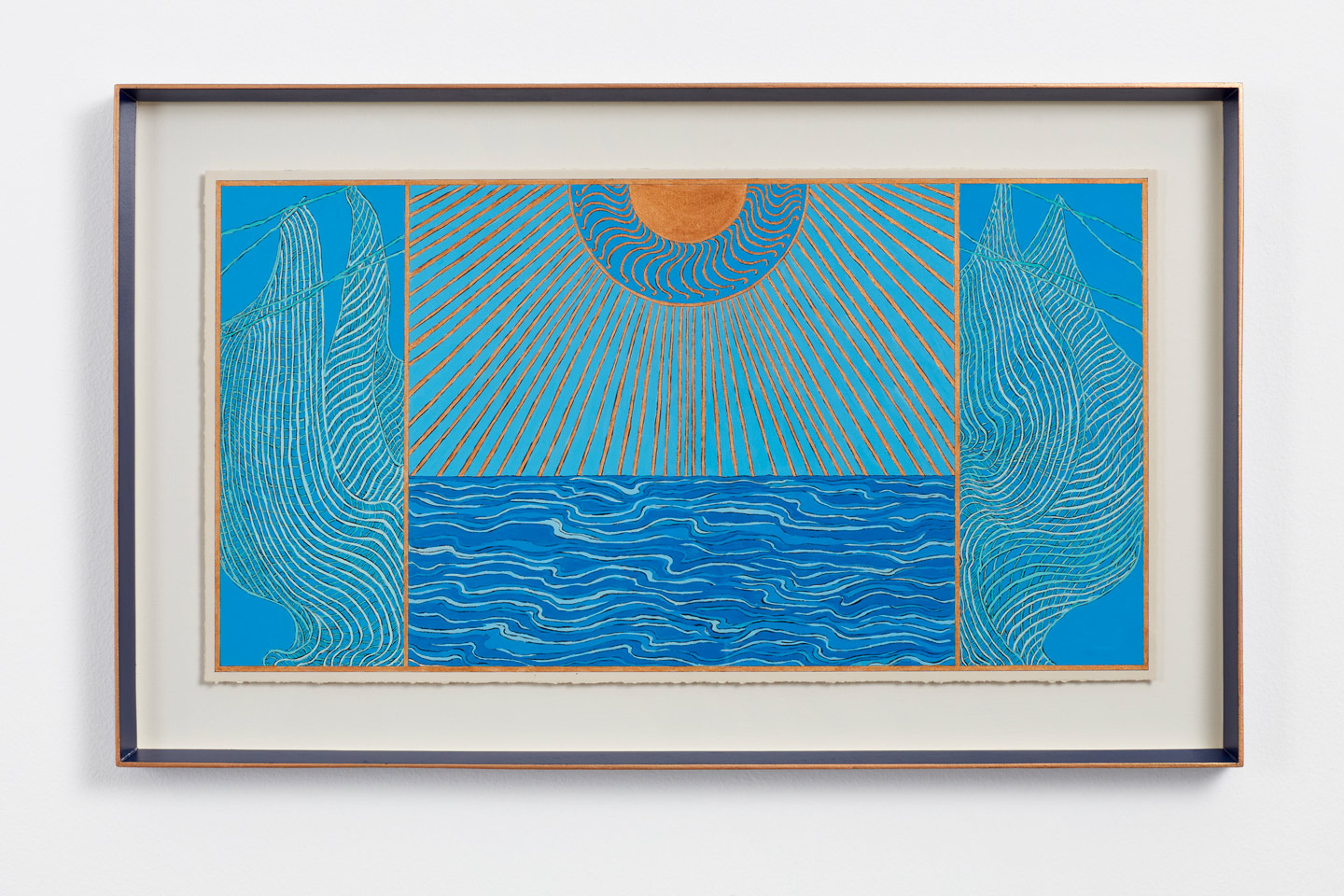 II - 'Love takes our hearts by storm, and turns us into enemies.' 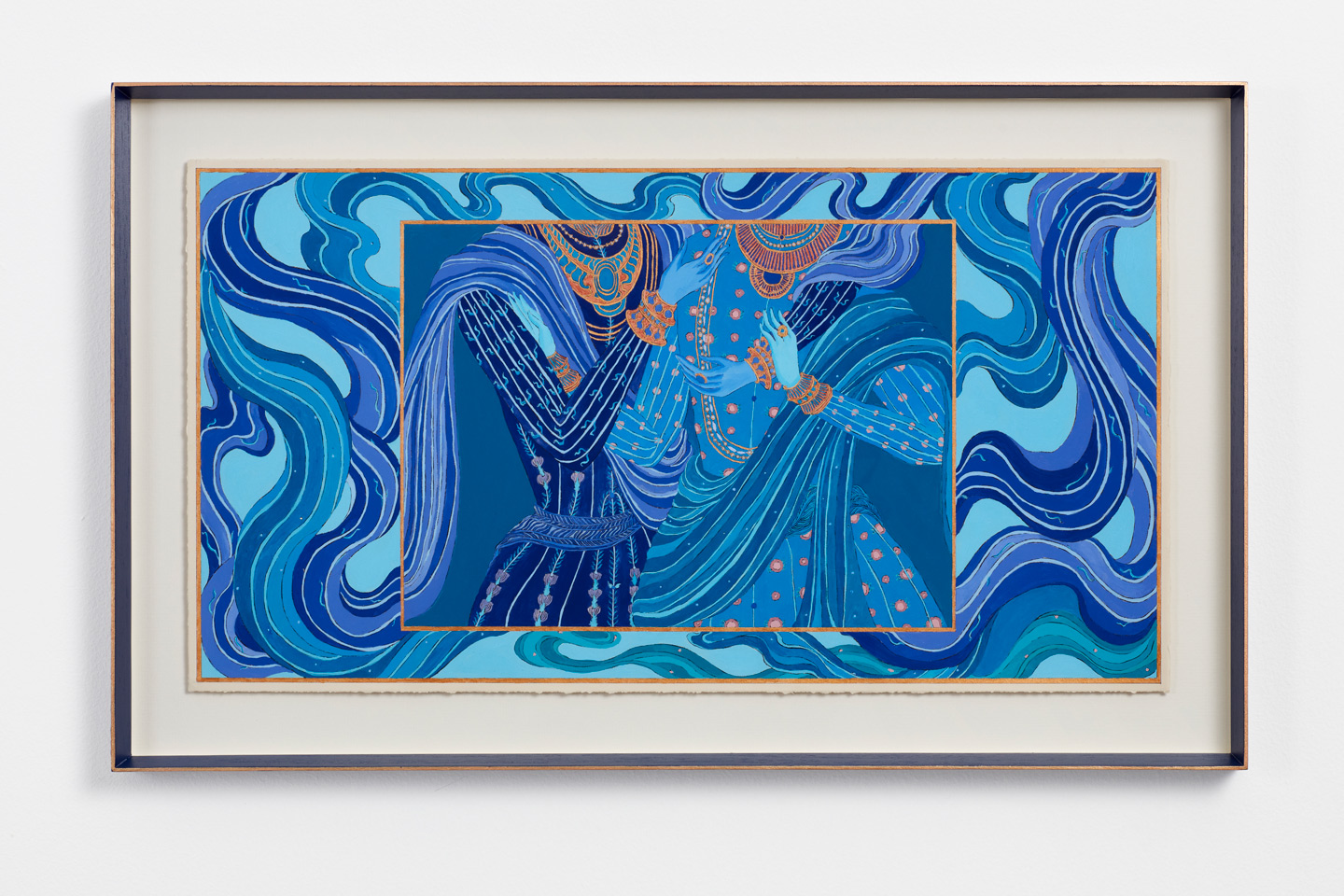 III - 'But if you betray us, if your soul weakens before the accursed snares of love, woe unto you!' 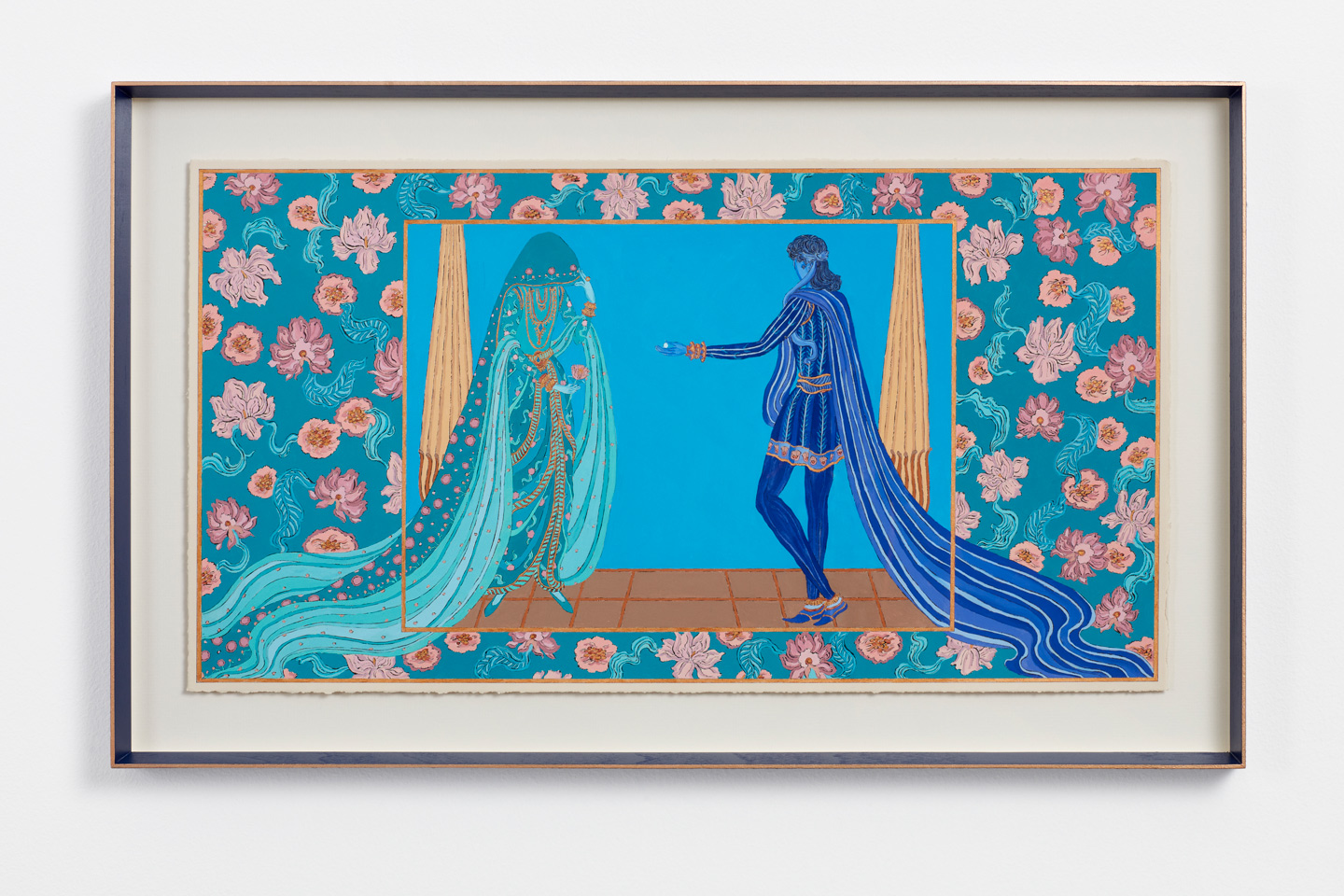 V - 'In the thick of the fragrant night, as I listened, with ravished soul, to the tunes of your beloved voice.'

IV - 'My eyes follow you through the darkness, my voice beseeches you.' 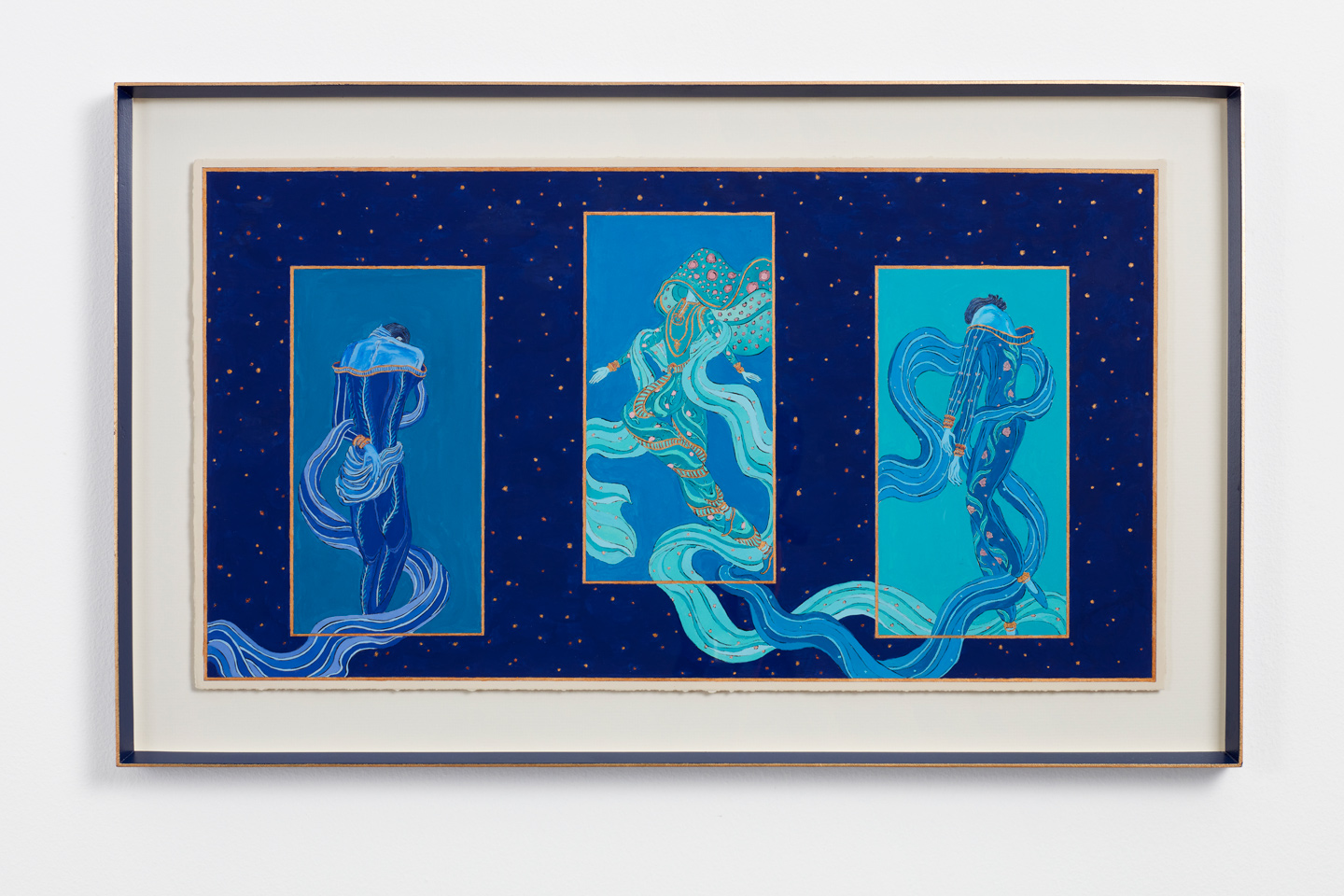 'Your hand shivers and trembles; Your heart is moved by a gloomy foreboding.' 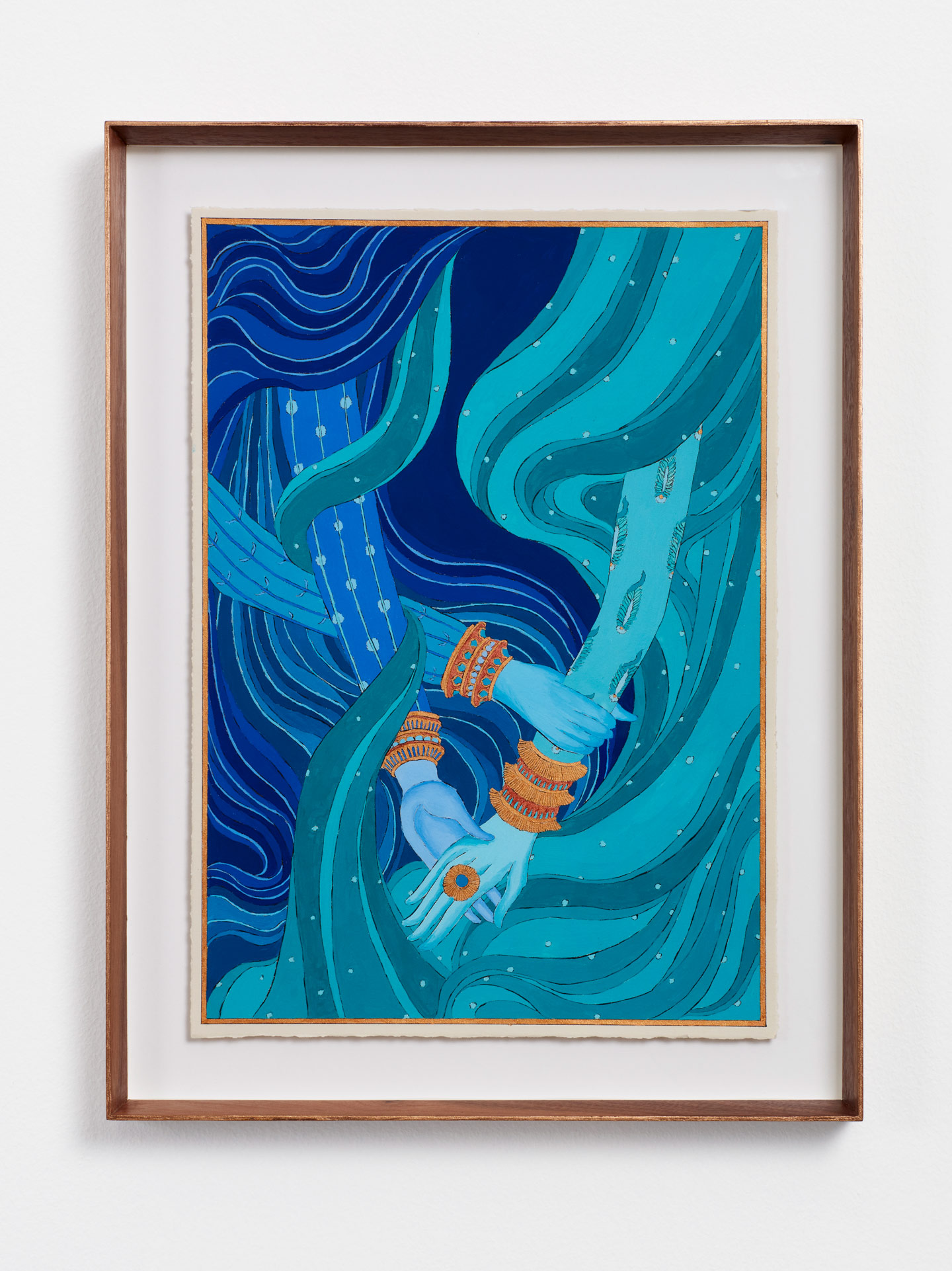 VI - We swear to punish your sacrilegious love!' 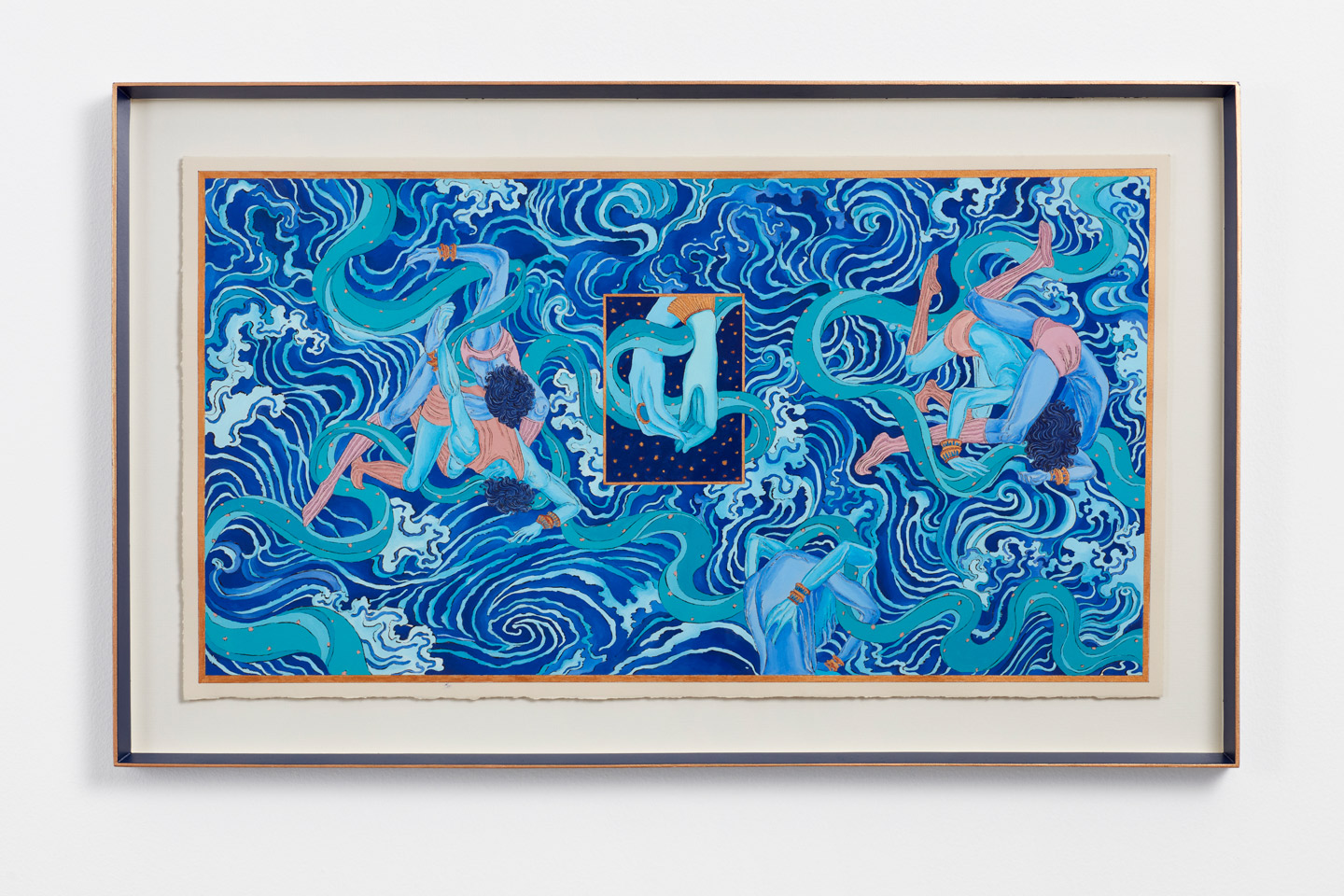 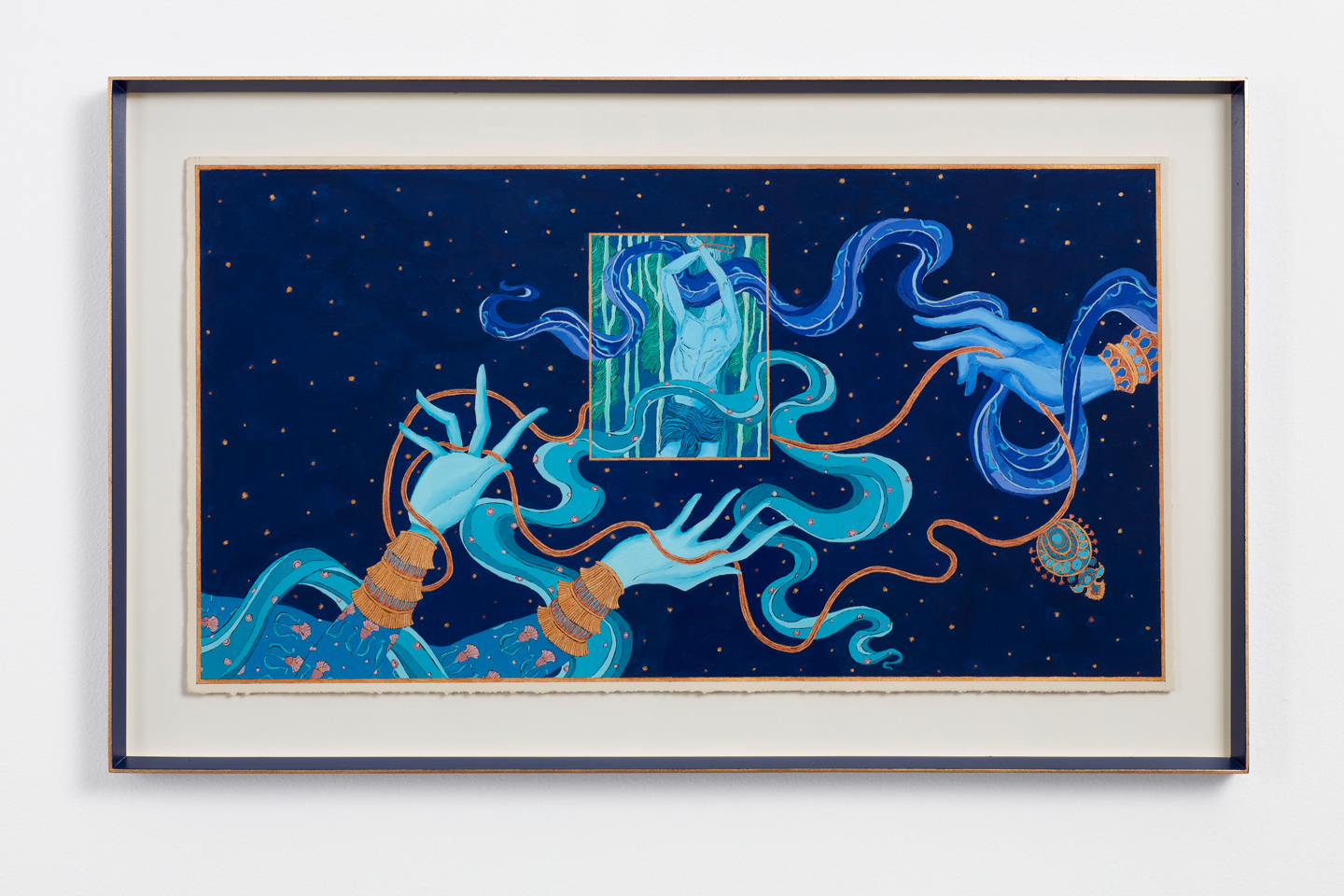 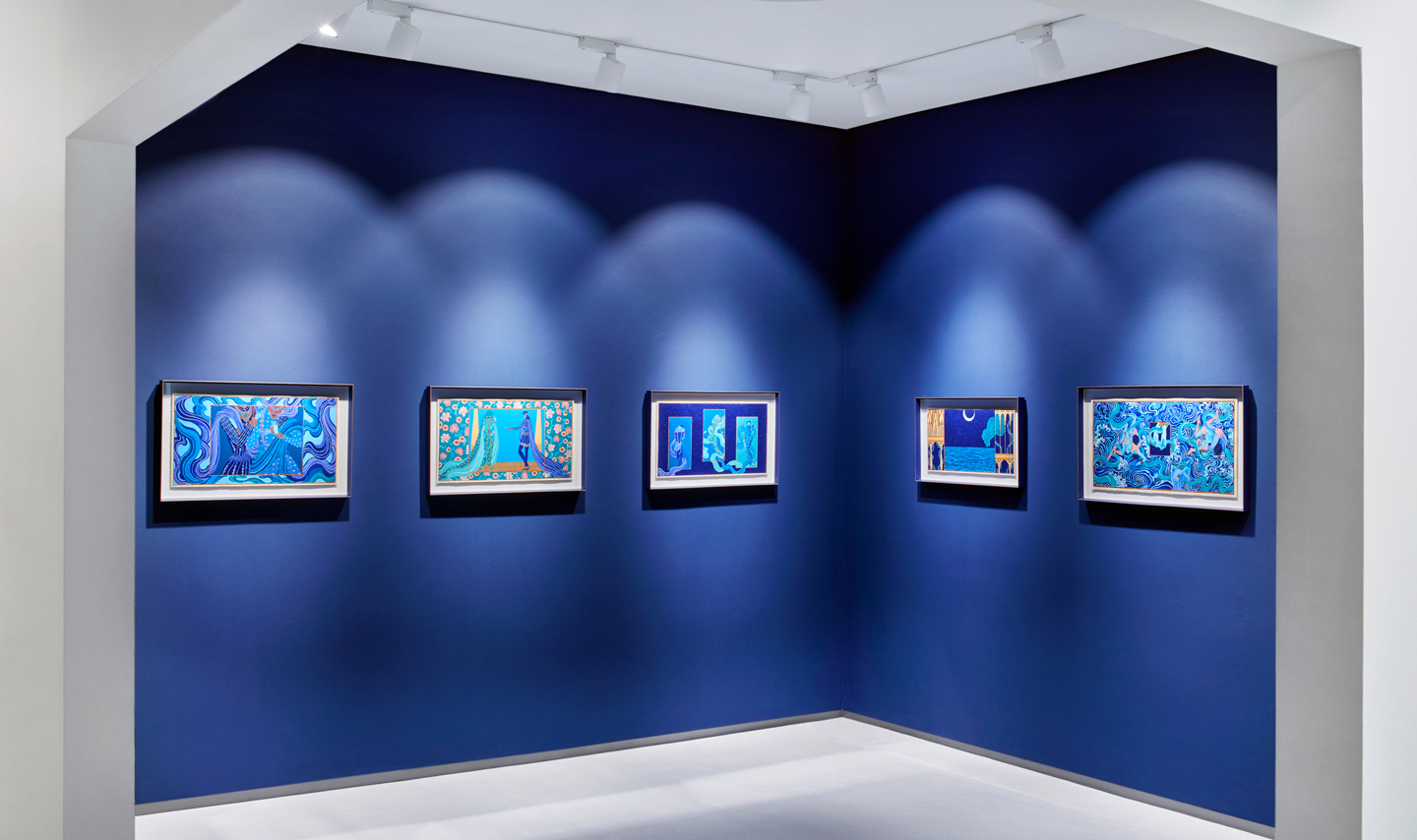 VIII - Fiery liquor, pour a sacred ecstasy within our hearts.' 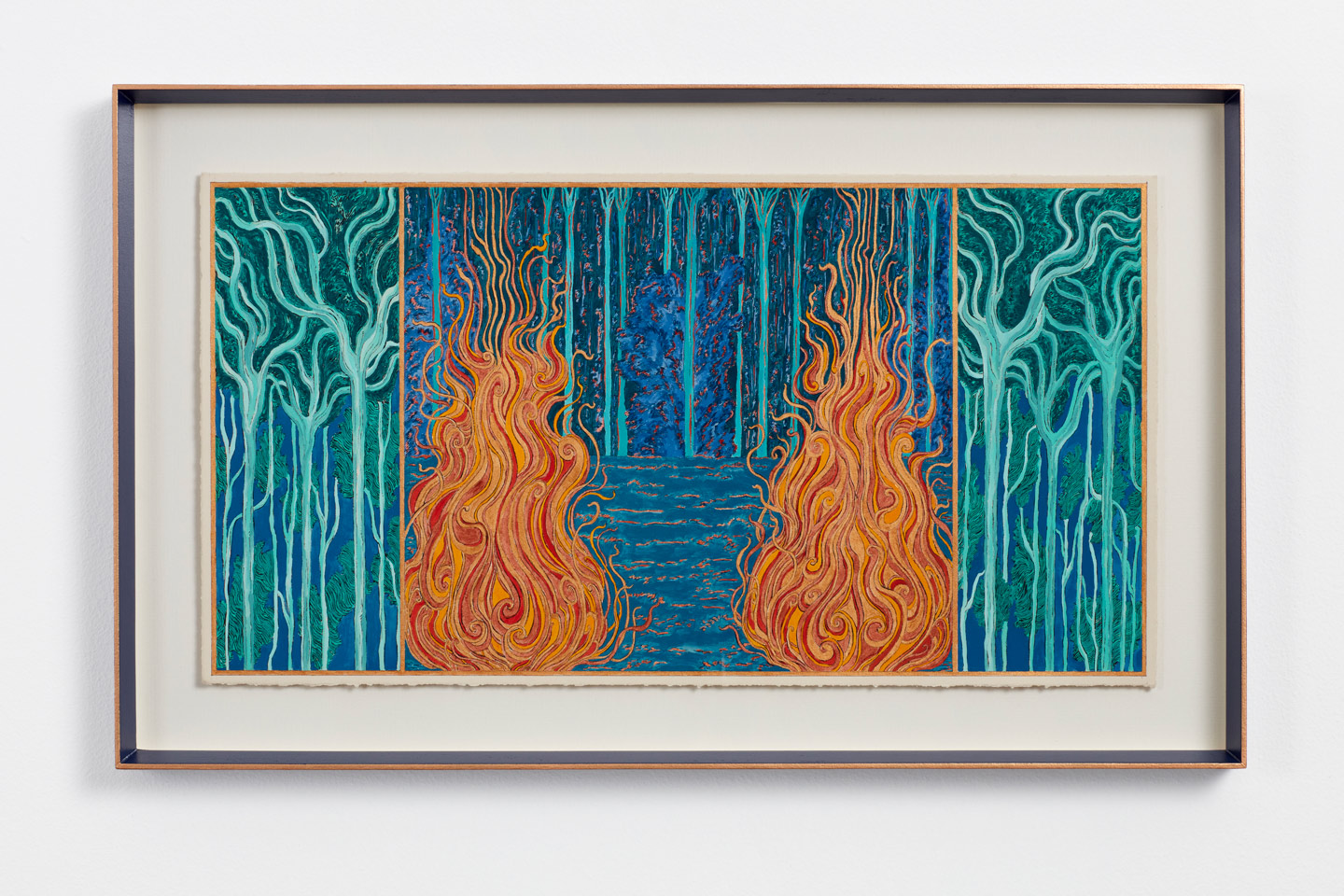 IX - 'Farewell dreams of love! On the ocean, I shall sleep in your arms.' 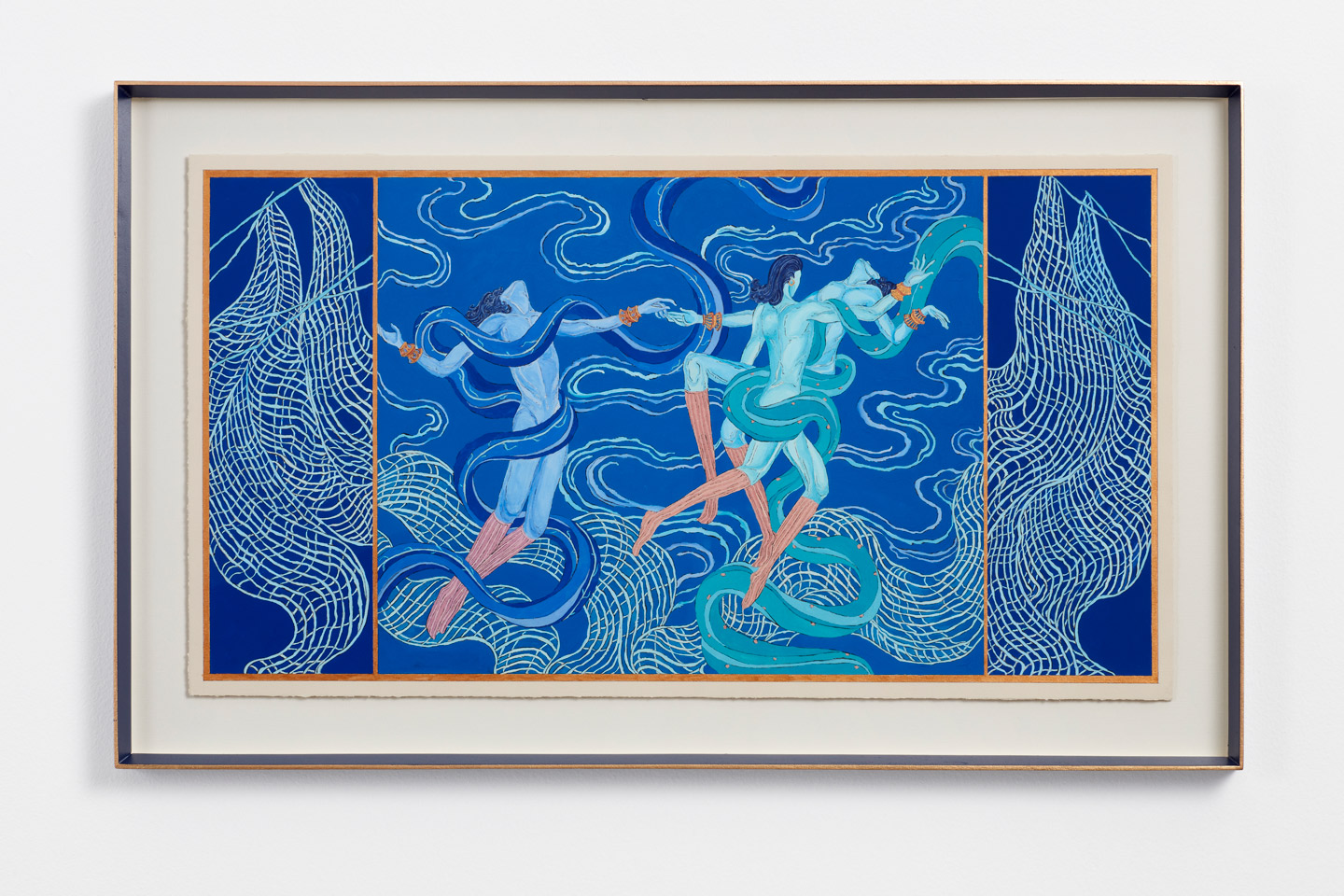 Washing the isle of the dead

Fanned by the billowing

WHATIFTHEWORLD is delighted to present Shakil Solanki’s second solo presentation with the gallery, ‘The Pearl Fishers’.

On this occasion, the artist engages in a sensuous reimagining of Georges Bizet’s 19th Century opera, ‘The Pearl Fishers’, through a new series of poignant gouache paintings. The opera is originally set in ancient Ceylon (present-day Sri Lanka) and centres around a tragic love triangle which unfolds between the three main characters: two fishermen who swear undying friendship and loyalty to one another before being torn asunder by the arrival of a veiled priestess with whom (in the original story) both men fall in love.

Drawing inspiration from the lush scenes enclosed in ornamental borders found in classical Indian and Persian miniatures, Solanki has developed a distinctive visual language which combines the aesthetic qualities of the paradisiacal gardens deeply-rooted in his cultural memory, along with the sensual and often turbulent emotions associated with sex and desire. With ‘The Pearl Fishers’, the creative vitality of Solanki’s secret gardens enveloped in myth and metaphor remains clearly intact, yet the setting shifts to the waves and ripples of an infinite ocean.

It is perhaps because of this inversion of landscape that Solanki sought solace and guidance in the poetry of one of his greatest artistic influences – the British filmmaker, artist, poet and activist Derek Jarman. And it is also perhaps not by chance that Bizet’s ‘The Pearl Fishers’ bears exactly the same name as one of Jarman’s poems that is quoted above. Regarding Jarman’s formative influence on his practice, Solanki writes:

‘Chroma’, and Jarman’s wider oeuvre, have enamoured and influenced my work a great deal over the past few years. The opera’s title instantly steered my mind to the above poem, and after further reflections on the opera’s plot, it felt only natural to tap into the underlying homoeroticism which I found between the two men; a tale of unrequited love, filled with passion, rage and tragedy. It was this intimate dynamic which I wanted to focus on in this body of work, subverting the original triangle, and reimagining a more queer-based narrative, sustained by Jarman’s melancholic words.

It is clear, therefore, that Solanki eschews a literalistic interpretation of Bizet’s opera. Rather, his approach involves a kind of mediation, a ‘turn’ to Jarman’s recollections of a luminous seashore, where desire is lifted out of time and becomes enduring, capable of eternity. Apropos of his reading of Jarman’s poetry, Solanki goes on to write:

Here, the ocean represents queerness; a boundless space of unrestrained, primal and overwhelming passions – all symbolised by the colour blue. For Jarman, queer desire is as natural as the ocean, as timeless and constant as the tide.

Solanki thus conveys the emotional essence of Jarman’s melancholic prose in his reimagining of Bizet’s operatic project. This gesture allows for his paintings to become thoroughly allegorical – they capture the ‘spirit’ of Bizet’s tragic narrative in all its pathos, misery and beauty; yet at the same time, they evoke the subtle ways in which the ocean and queerness are inextricably intertwined. What is especially interesting here is that Solanki’s reinterpretation of the opera, although subversive and displaces the work from its proper historicist context, does not give any sense of a betrayal of the original content.  Instead, it seems as if this very anachronistic gesture of subjective intervention brings about a shattering new insight – a hidden kernel of truth which once revealed opens up an entirely new dimension and gives rise to a new perspective on the opera itself. In this way, the entire subversive effect of disrupting the original love triangle not only retains a fidelity to Bizet’s work but feels as if it brings us even closer to the story than any objective literal approach.

An illustrative case of Solanki’s capacity to throw new light on Bizet’s ‘The Pearl Fishers’ lies in his productive and nuanced use of multiple compositional arrangements – each painting contains a multitude of enclosed scenes, delineated by golden borders or frames, which overlap one another. While this compositional formality puts in place a measure of delimitation, a crucial feature of these self-enclosed boundaries is that they are nonetheless never fully contained: robes, veils and fishing nets ‘overflow’ from one narrative space to the next; as if the inner passions in these depicted realities are ‘too strong’ and threaten to break through the confinements of their golden frames.

Solanki notes that these motifs (in particular the robes and the veil) are indeed intended to go beyond their proper aesthetic impact and function as a site where metaphorical signification can emerge:

These fabrics – initially mere aesthetic considerations – gradually grew into their own motifs throughout the opera’s narrative, extending as signifiers which could symbolize the depths of each character’s inner state.

This process of poetic inscription is clearly evident in his use of the veil. For while it conceals underlying emotions of desire and despair, it is precisely through this very concealment that Solanki’s imagery most deeply evokes the recollective ‘feelings’ of lyrical nostalgias and amorous grief.

Solanki’s aesthetic conception of the ‘The Pearl Fishers’ is therefore filled with symbolic density. By disclosing the presence of emotional tensions through a host of vividly embodied figures, colours and motifs, Solanki finds a much more intimate and poetic association with Bizet’s work than if he were to directly portray the most tragic elements of the opera’s plot. This approach allows Solanki to chart his own perspective on the bittersweet nature of love and longing, passion and desire. He writes:

What unfolds is a tale of yearning, grief and redemption against the backdrop of a still and romantic ocean beneath the gleaming moon; a site of enchanting epiphanies which can animate reveries, recollections and unfulfilled desires. But as endless longings turn into overwhelming passions, the benevolence of love gives way to dramas of violence and tempestuous rage. And perhaps, it is only by plunging into these depths that the paradoxical nature of desire can be revealed; for just as surely it draws the lovers together, so too does it drive them apart – like the fishing nets which unravel around warping limbs and clasping hands.

Text by Nicolas Friedrich Tanner in collaboration with Shakil Solanki

Shakil Solanki (b. 1998) was born in Cape Town, South Africa. He has recently completed his undergraduate degree at the Michaelis School of Fine Art, and is currently based in Cape Town, practising as an artist. Solanki majored in the medium of printmaking during his third and fourth years of study. On completion of his degree in 2019, he was awarded the Simon Gerson Award, as well as the Katrine Harries Print Cabinet Award, for excellent achievement in the printmaking medium. Since 2018, he has taken part in several group shows, along with many silkscreen-printing jobs, and a residency at the South Atlantic Press in 2020.

Solanki interrogates dynamics of intimacy, using the space of a secret garden to explore dualities of tenderness, desire and violence. His experiences as a queer brown man remain central to his practice, with classical Eastern art standing as a prominent source of inspiration. This vernacular is repurposed, encompassing homoerotic dialogues to evoke lush, dreamlike lands, which remain both romantic and discomforting at once. The trope of a secret garden is used as a liminal space, where contrasting emotions of trauma and longing exist hand-in-hand with moments of stillness, using the theme of intimacy as a point of convergence to explore its many dynamics, evoked within many shades of the colour blue.