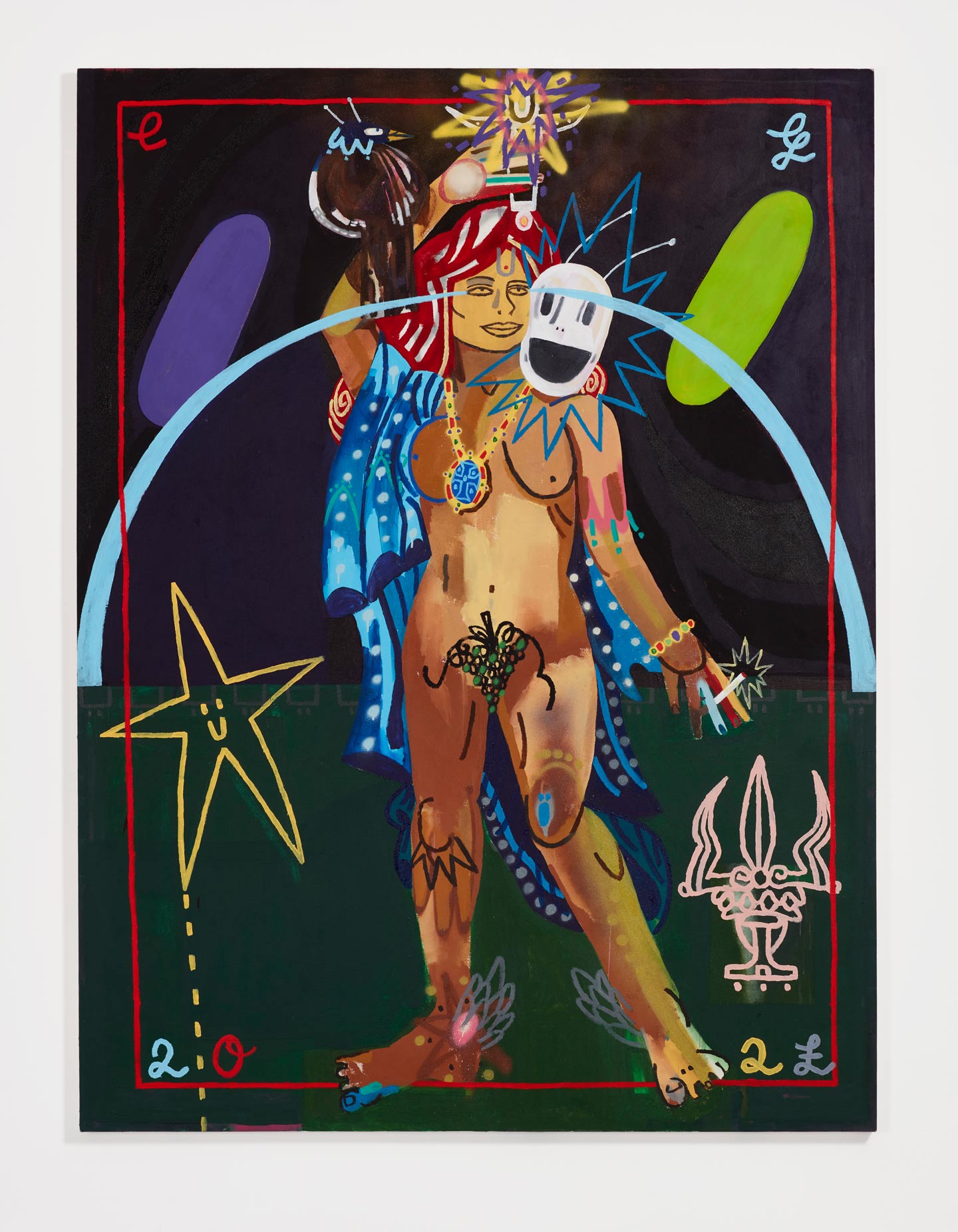 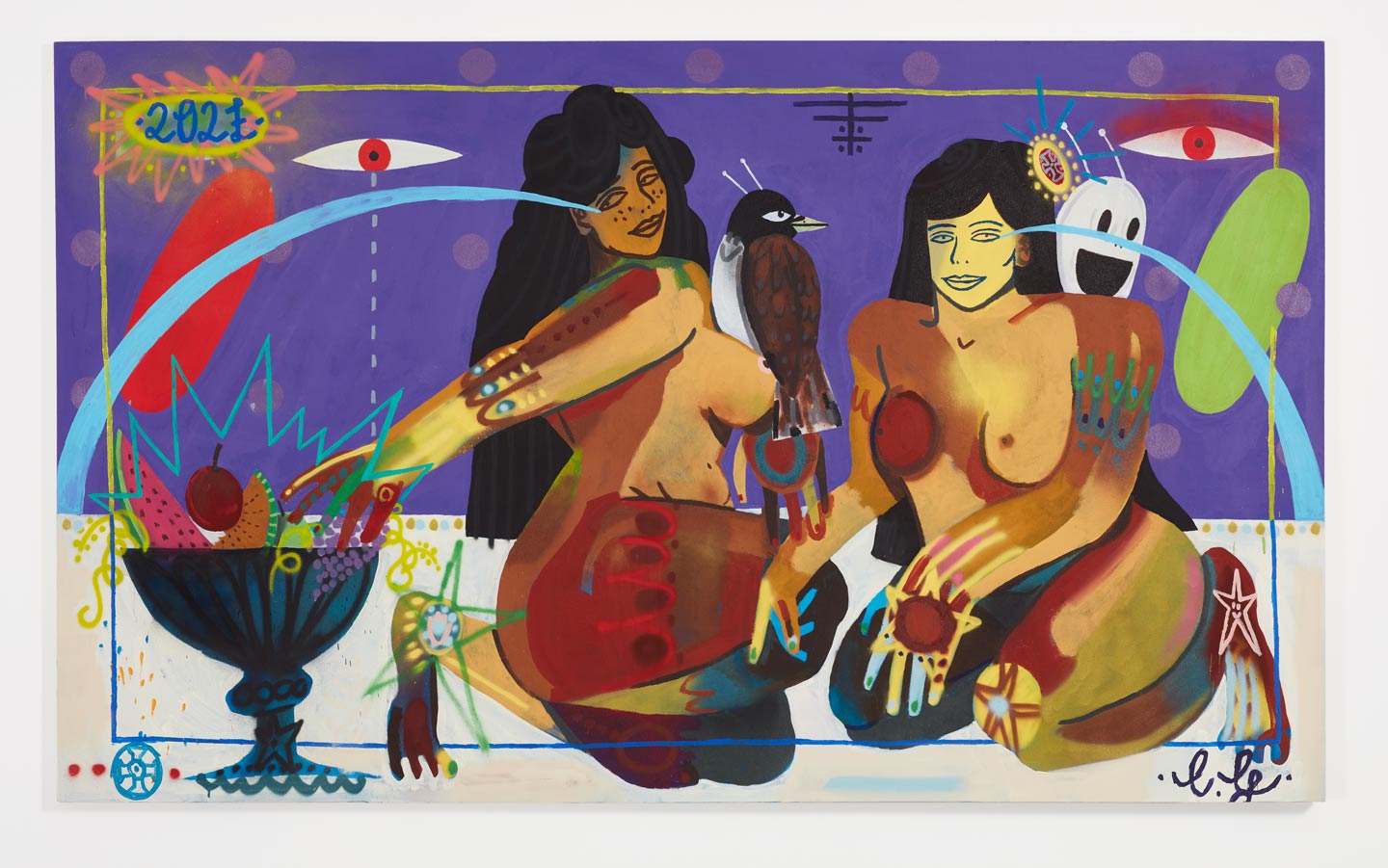 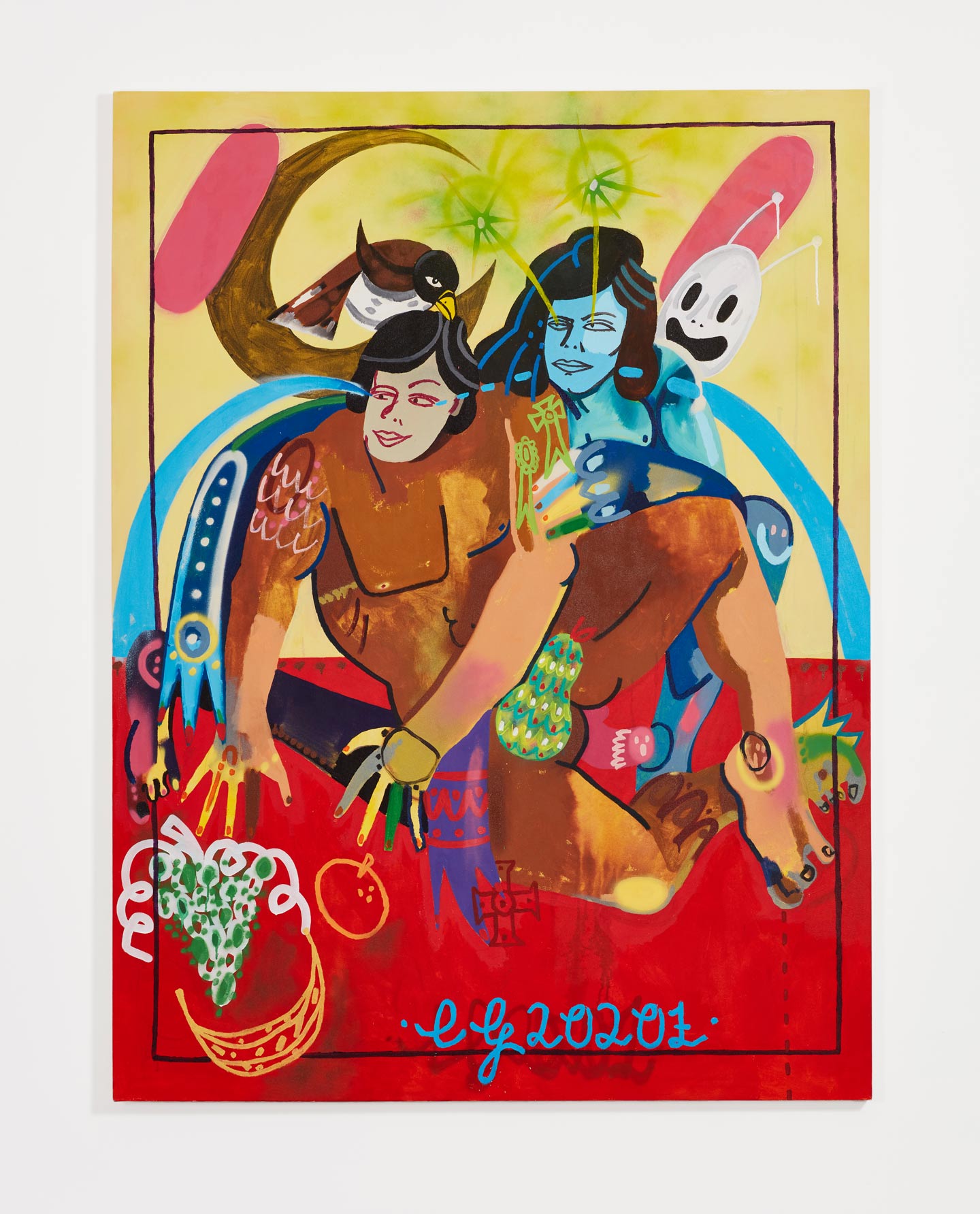 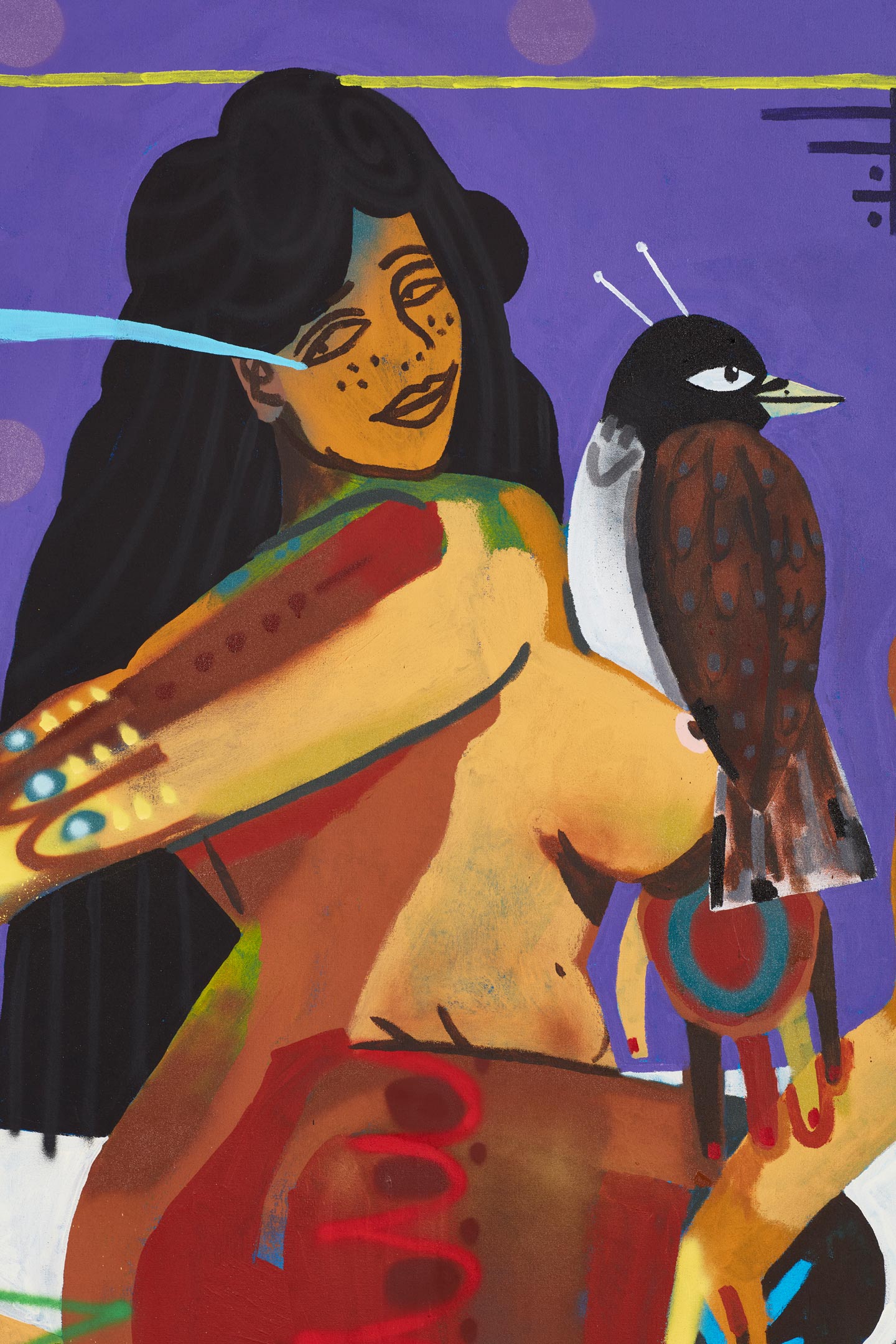 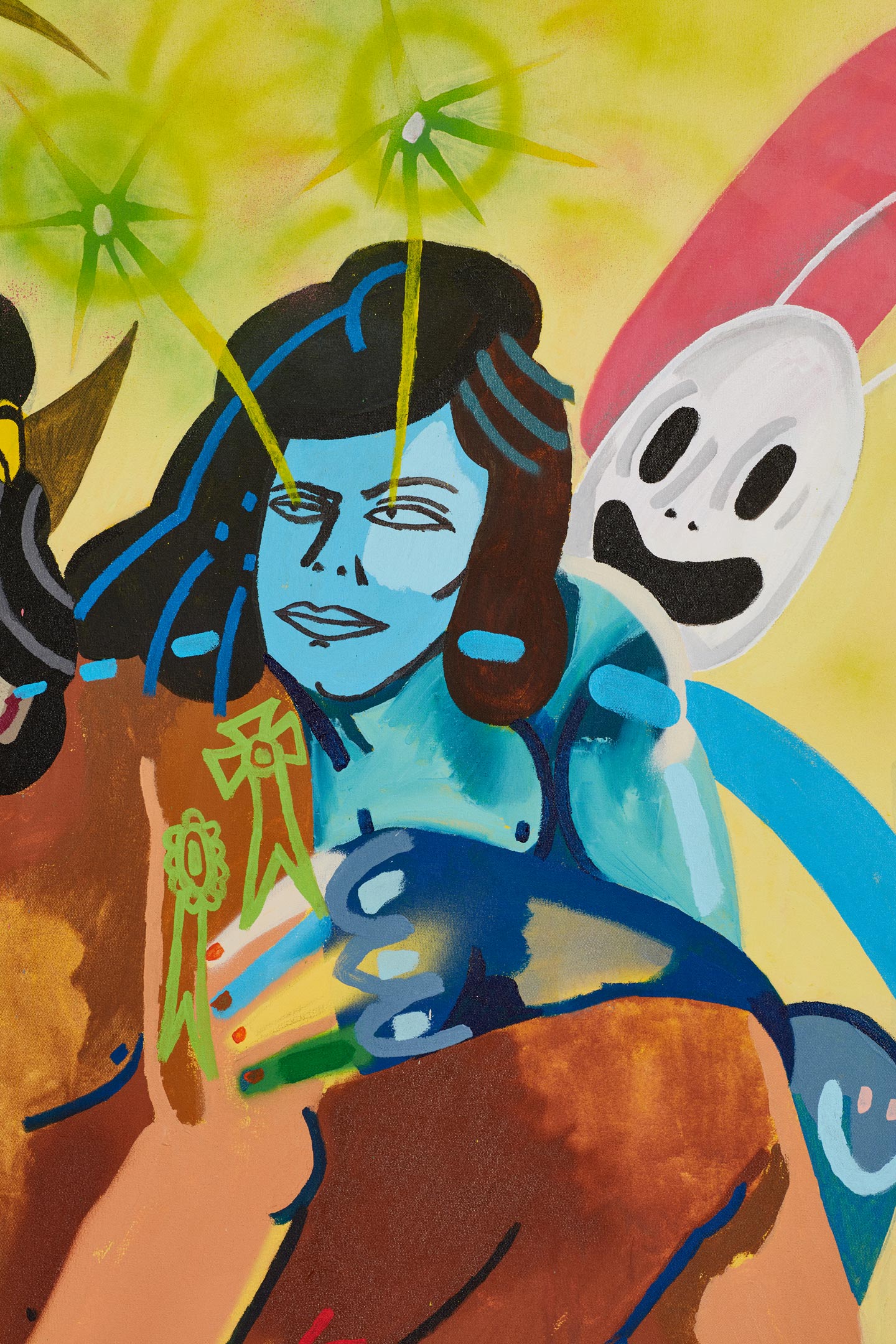 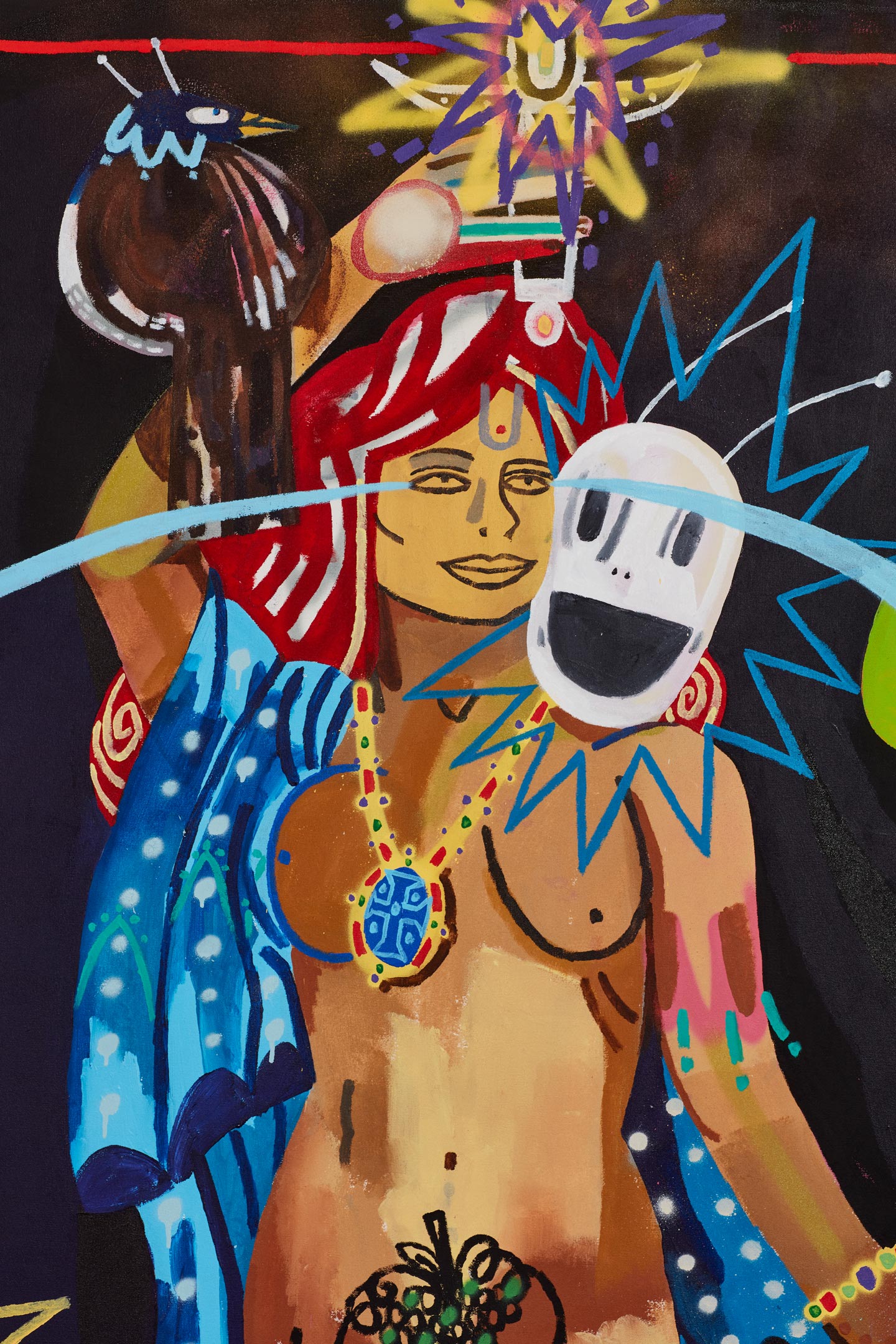 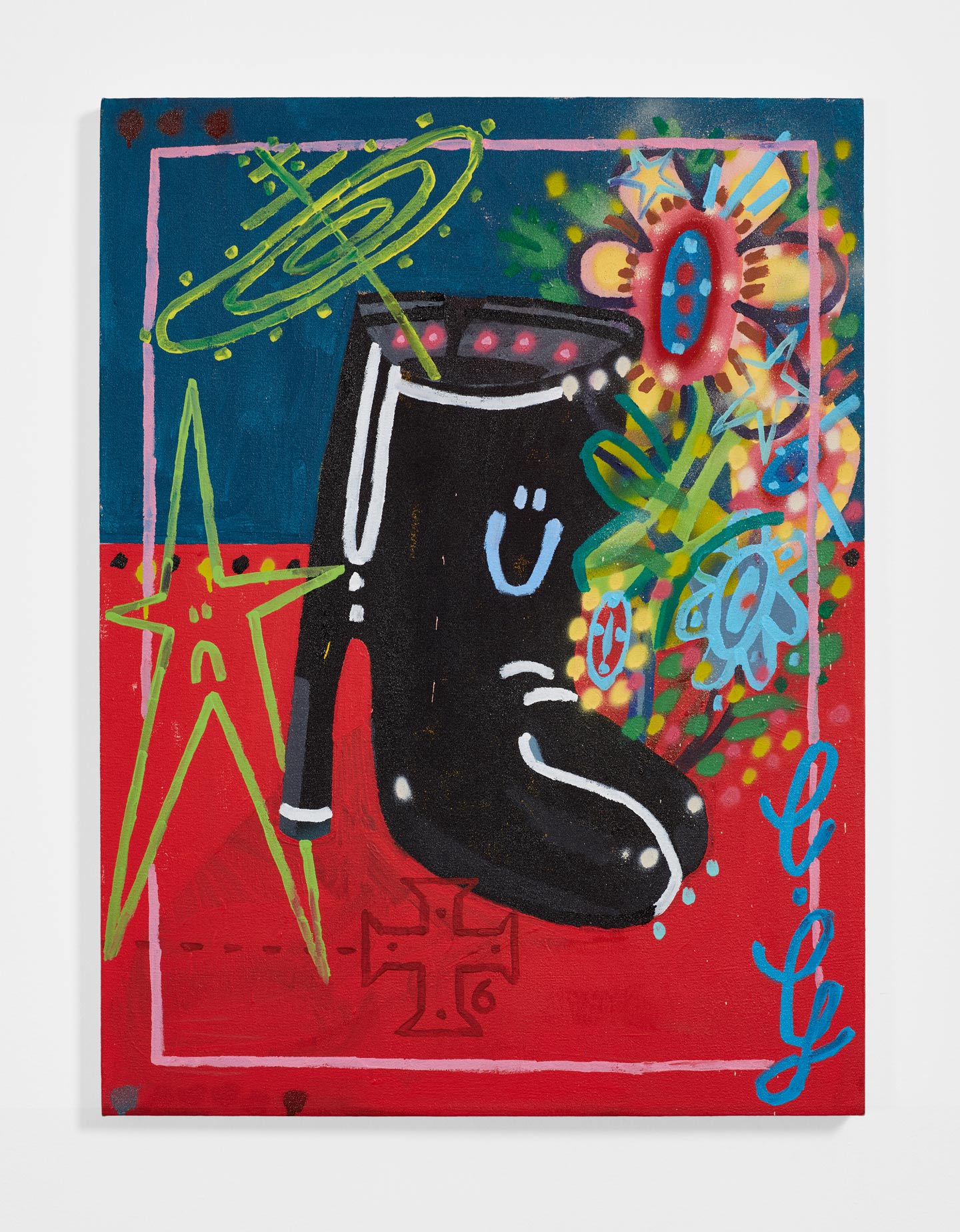 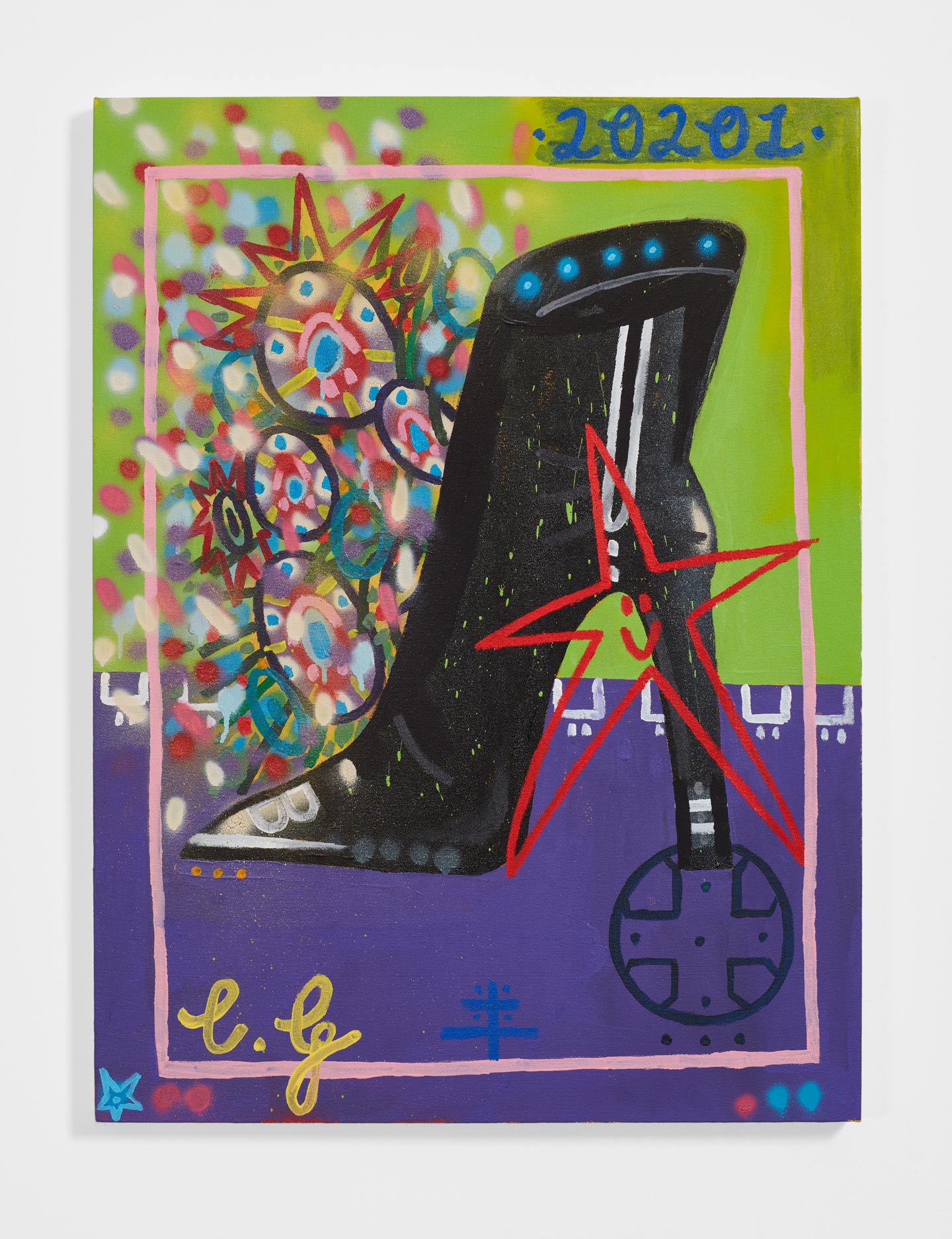 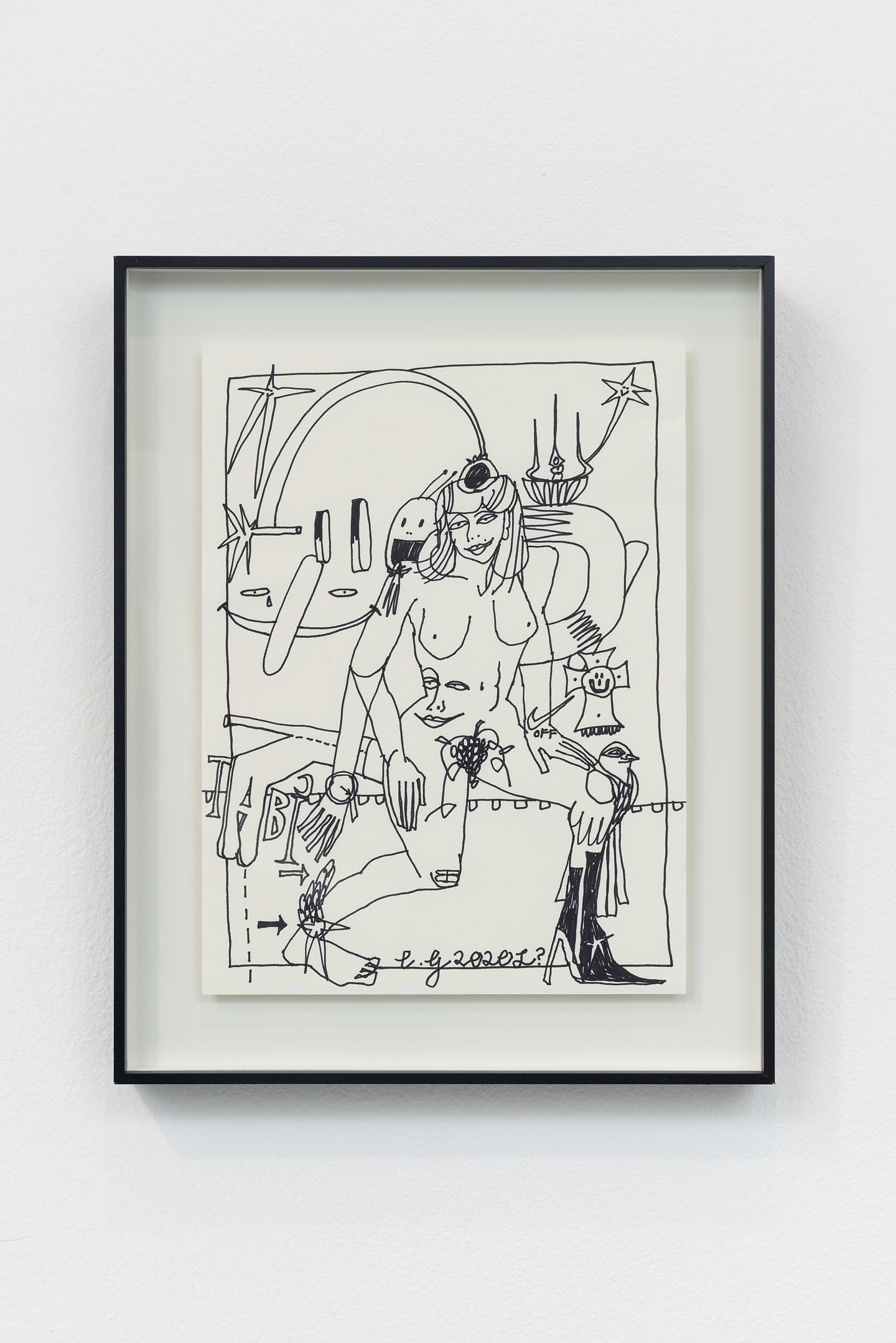 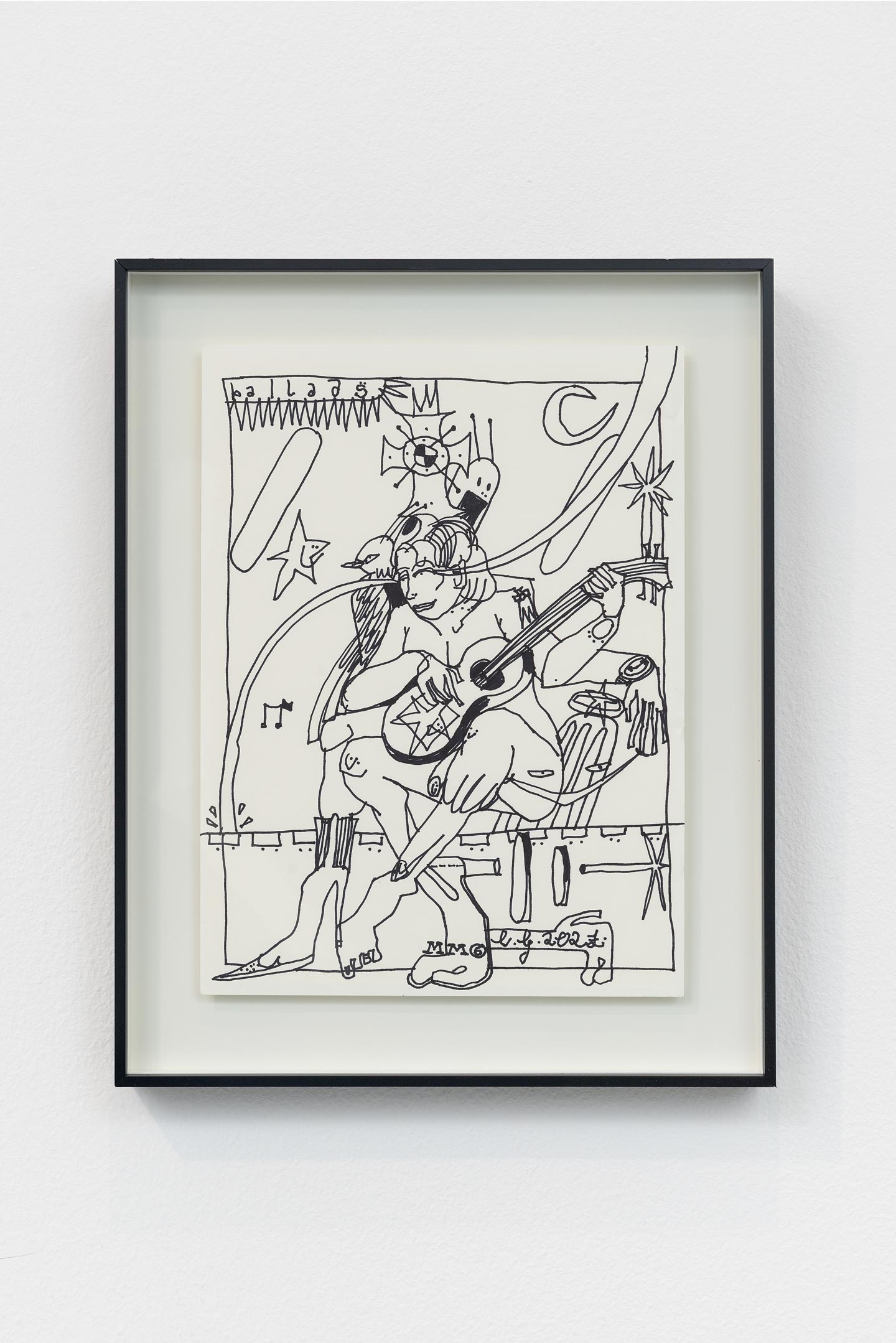 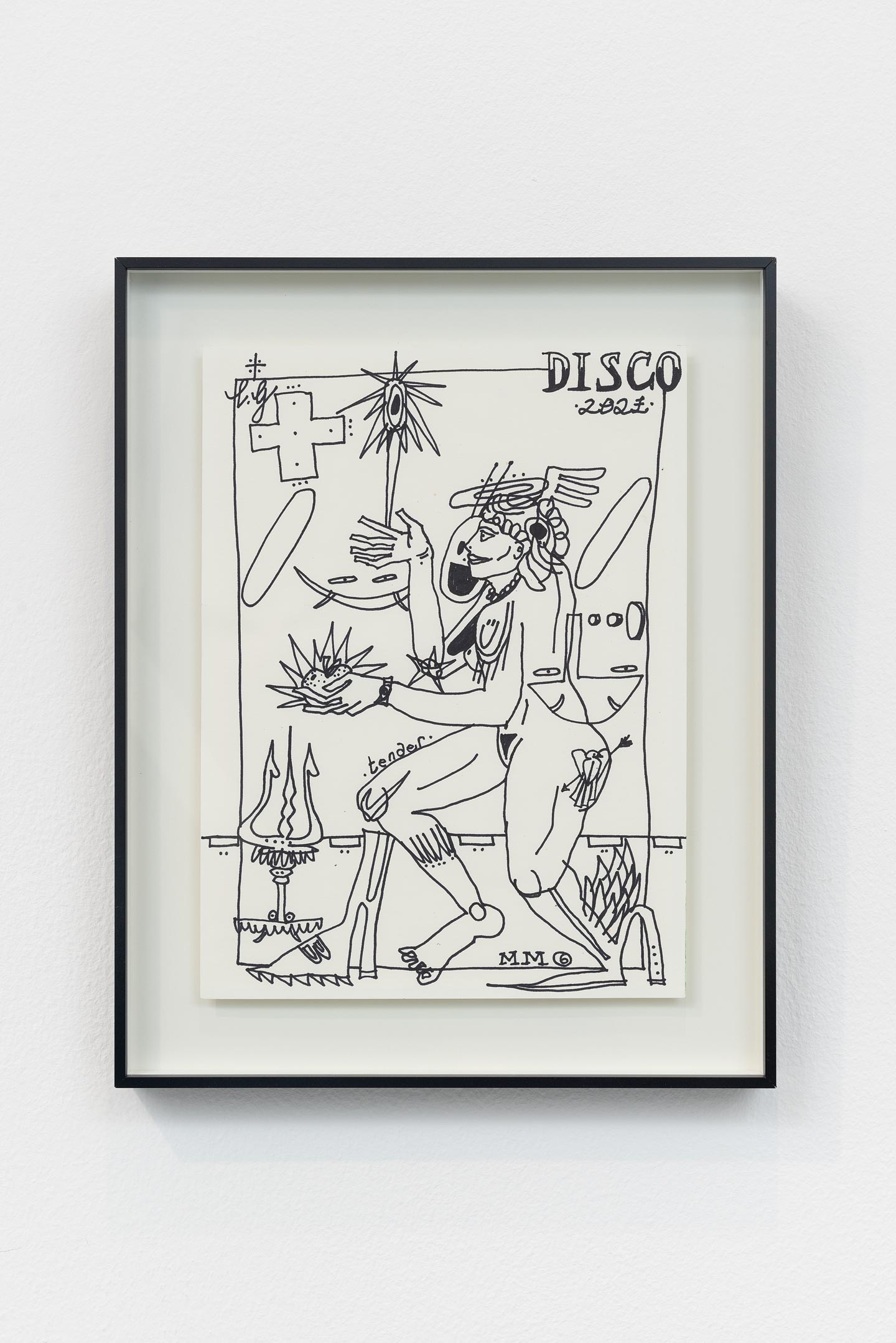 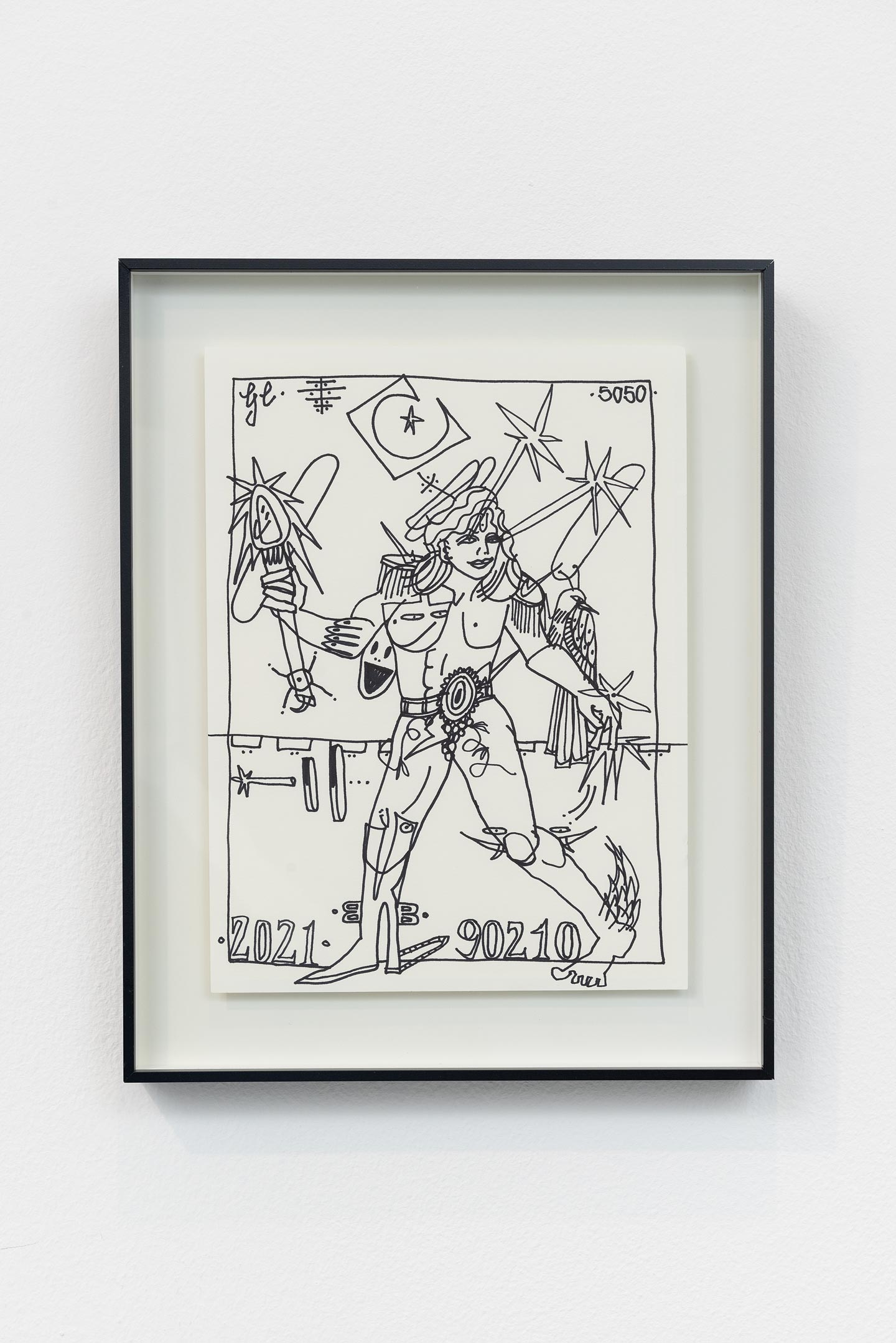 The pantheon of characters in Callan Grecia’s Cosmic Disco are aspirational figures. The men have big muscles, the women have voluptuous curves and the gender-fluid demi-gods are magnetic. Everyone has great hair. Nakedly sensual, they are hanging out, looking cool and engaging in leisurely, pleasurable, instagrammable libations.

The imagery that the South African artist Callan Grecia channels is both contemporary and ancient and he dips into the span of the Western art canon, the work of contemporary African artists, the Hindu pantheon and the internet image economy. He allows us to see the method of the construction of his painterly worlds: they are mystical and otherworldly but they have been informed as much by the lens of his experience of living in the real world as by his imagination, and the aesthetic luxuriousness of the paintings contains clues that reveal a more serious and worldly underpinning. Grecia is a Durbanite whose eye has been formed by both Kwa-Zulu Natal’s natural tropical abundance and his Indian cultural heritage and at the heart of his drive in conceptualising Cosmic Disco was a desire to pay homage to the images of Hindu gods in the paintings he was surrounded by at his family home but had paid little or no attention to. He says “I was stuck for a long time only really looking at the west, so it was a good way of extending my sphere of investigation.” The works are a kind of visual speculative fiction and propose an alternative universe or a Utopian future. At the same time, they contain cues that reveal the artist’s global consciousness, his upbringing in a country with a violent and divisive past and his urge to redress an art historical focus whose eye rested primarily on the West. This particular combination of the difficult and the sublime is potent because it makes the inventive joy of these Utopias even sweeter by complicating them.

Born just prior to the Born Free generation of post-1994 South Africa, Grecia is part of a generation of South Africans emerging with a confident, assertive and questioning identity. In his studio practice, Grecia allows the visual to lead and trusts this process to prompt an ongoing stream-of-creation where he draws from his own particular narrative and imagination. He often works intuitively and quickly and swaps between lateral and critical thinking. The studio process begins with drawings on paper and he extends and expands these to large-scale colour-saturated paintings. He has collections full of images drawn from everywhere and everywhen with his magpie eye. He has a headful of imagery, he has notebooks full of palimpsests of drawing and overdrawing: Callan Grecia stands at his own nexus of historical time and place, speculative fiction, art history, internet image saturation, decolonisation, childhood cartoons, Hindu prayers and fashion brands. He is a creator of demi-gods and otherworlds, shape-shifting, gender-fluid, dynamic figures that shimmer and flicker with bursts of esoteric symbols. Their immediate environments are sparsely graphic and defy placement – could be a dance floor, could be a temple wall. Their formats pulse with visual energy,  the surface animated by line drawings of visual symbols drawn over, behind and into the figures. He squeezes his compositions by drawing in an additional line frame which sits inside the edges of the format and this intensifies the crammed space and allows some aspects of the drawings and paintings to push up against this inner frame and some to burst out over it as if the energy in the works cannot entirely be contained. His thinking is astute and unpredictable and he brings this quality into his drawings and paintings – it’s a trick that the artist loves playing where he configures and reconfigures graphic cyphers, characters and emissions, slippery in meaning and mercurial in intention. This slipperiness is not to confound the viewer or deny access to the works but is a visual device of the artist meant to subvert the idea that we can assign specific meaning to specific visuals, and which instead opens up Grecia’s fabricated worlds to readings of layers of shifting meaning and endless reinvention. In an initial look at Grecia’s works, symbols and cyphers may evoke particular meanings  but in looking longer, it is clear that there is a multiplicity of meanings and that these motifs become more open-ended and interconnected. Backing his hyper-referentiality are the actual facts of his context: the conditions of his time and place.

An example of how Grecia pulls this together can be seen in this tumble of imagery, inference, meaning and interconnection: the stars in the works and all the different ways in which Grecia uses them: the end of a caduceus, the end point of eye rays, the flash of a cigarette ember, the dazzle of an offering, a floating superpower, the twinkles of light from a cosmic glitterball. I think of Callan Grecia himself who wears wings on his sneakers and of his shoe obsession … the Nike swoosh  which immediately invokes the Nike footwear brand, and could also evoke (from the word Nike) the ancient Greek winged victory, and from this, with the image of wings in mind, the various wings in the artworks become more evident. There are wings on shoulders like extra hands, and winged ankles invoking Hermes and Garuda and other flighted beings. In consideration of this, it becomes clear that there is another prominent motif linked with wings that appears and reappears in these compositions, often centrally: the Myna bird. This bird species, named in English after its Hindi name, is native to India and came to South Africa in 1860 on ships from India bringing indentured labourers to work on sugar cane farms, a bird known for its intelligence and mischievousness. Grecia says: “They came here with us on the ships and they’re classified as an invasive alien species in SA. Just like us. That’s why some have the antennas too. I like that we had company. They’re like ancestors in these paintings to me.”

We could see Grecia’s works as generators of meaning, where we consciously allow our own personal and historical references to inform the meaning that we derive from what we see – in the knowledge that the artist is making a rich and complex set of indices for us to play with, to connect, to create our own meaning in relation to the artist’s. The symbols and visual cues in Grecia’s paintings come from a deeply personal space, yet spiral out to contain a wider and profound context. This is part of the pleasure of the paintings and drawings, the artist’s mercurial, illusionist, trickster-thinking ability to provoke such multiplicities of meaning which are able to describe the artist’s own worlds, inner and outer, that spin a web of references which catch the viewer with the familiarity of shared cues, shared aspects of history and knowledge and invites them to share in the divinity of our best selves in the great Cosmic Disco.

Callan Grecia was born in Durban and currently works in George. His experimental, almost playful approach to painting combines figures, still lives and geometric abstractions. By combining these modernist techniques with pop culture and classical canonical references — Grecia fashions scenes that seem mythological, yet familiar, creating a hybrid world where the history of art collides with a futurist fantasy.

In 2021, Grecia presented a solo body of work, Laps Around the Sun, as part of the Artist Room series presented by SMAC Gallery. Notable group exhibitions include: No Experiment Lab Showroom, Paris Fashion Week Men, Paris, France (2019); Everything’s For Sale, KZNSA Gallery in Durban (2019); POROMPOMPOMPO, The Cosmopolitan in Johannesburg (2019), South Africa; and Shady Tactics, at SMAC (2018). His work is represented in the public collection of the Durban Art Gallery.