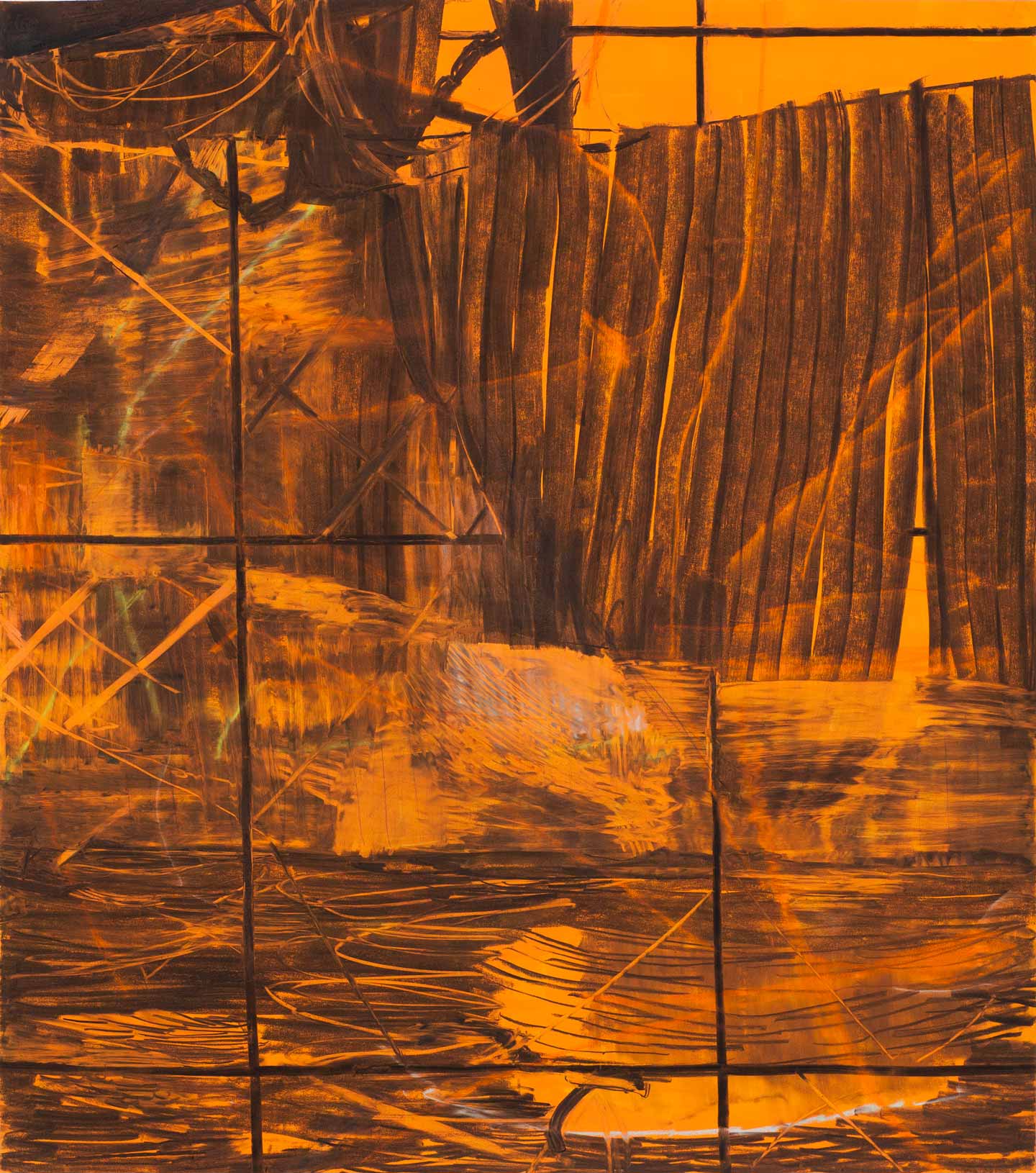 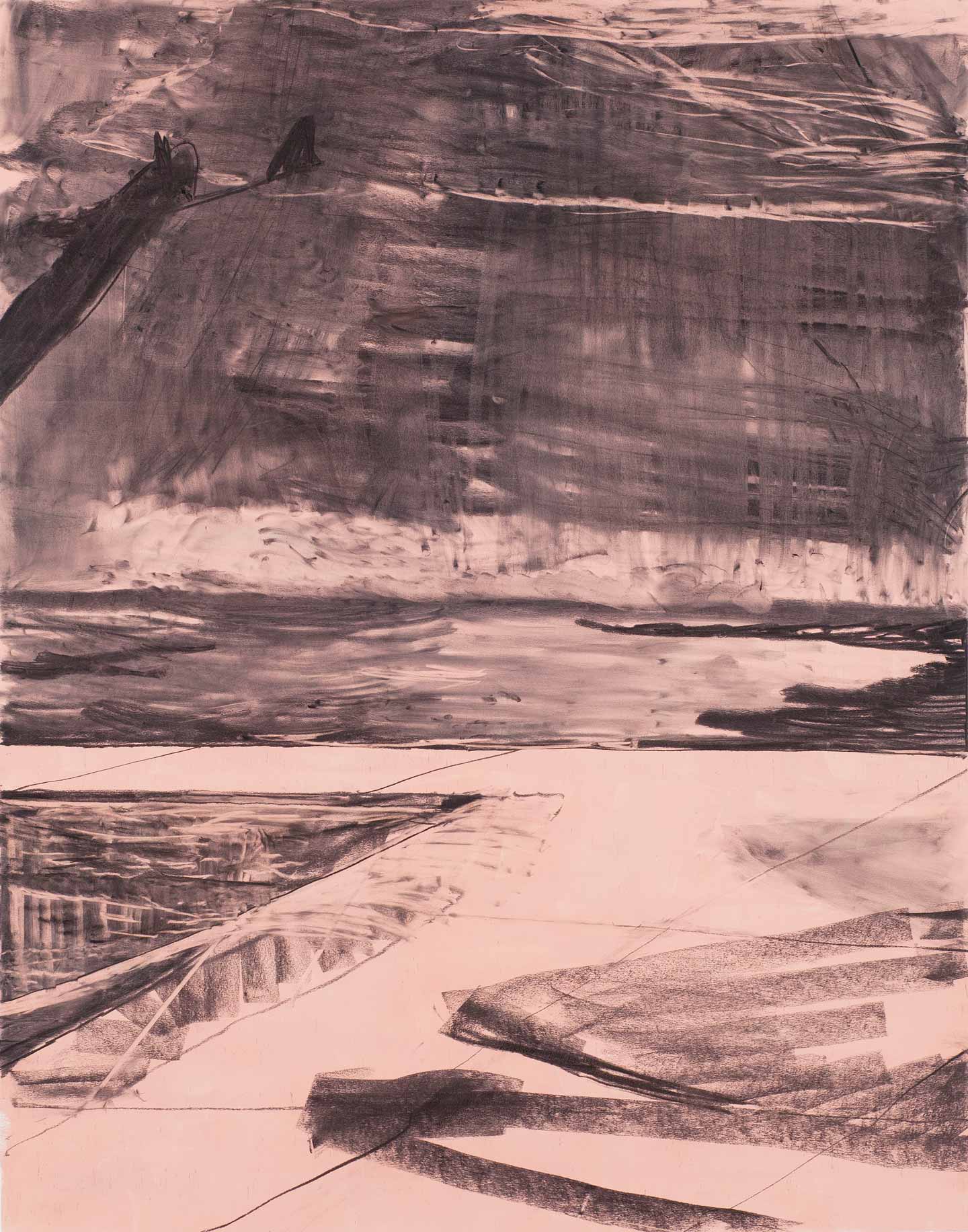 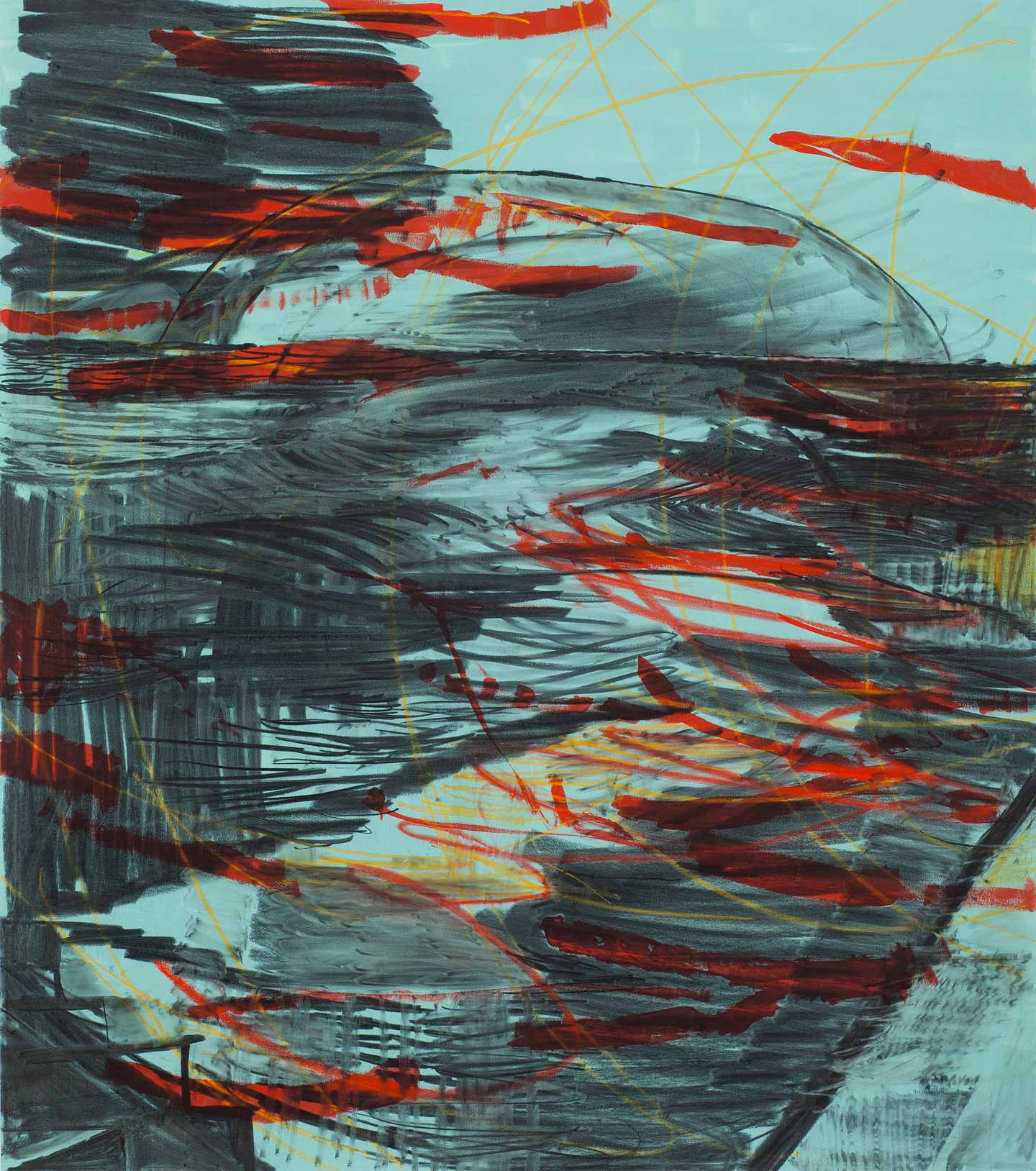 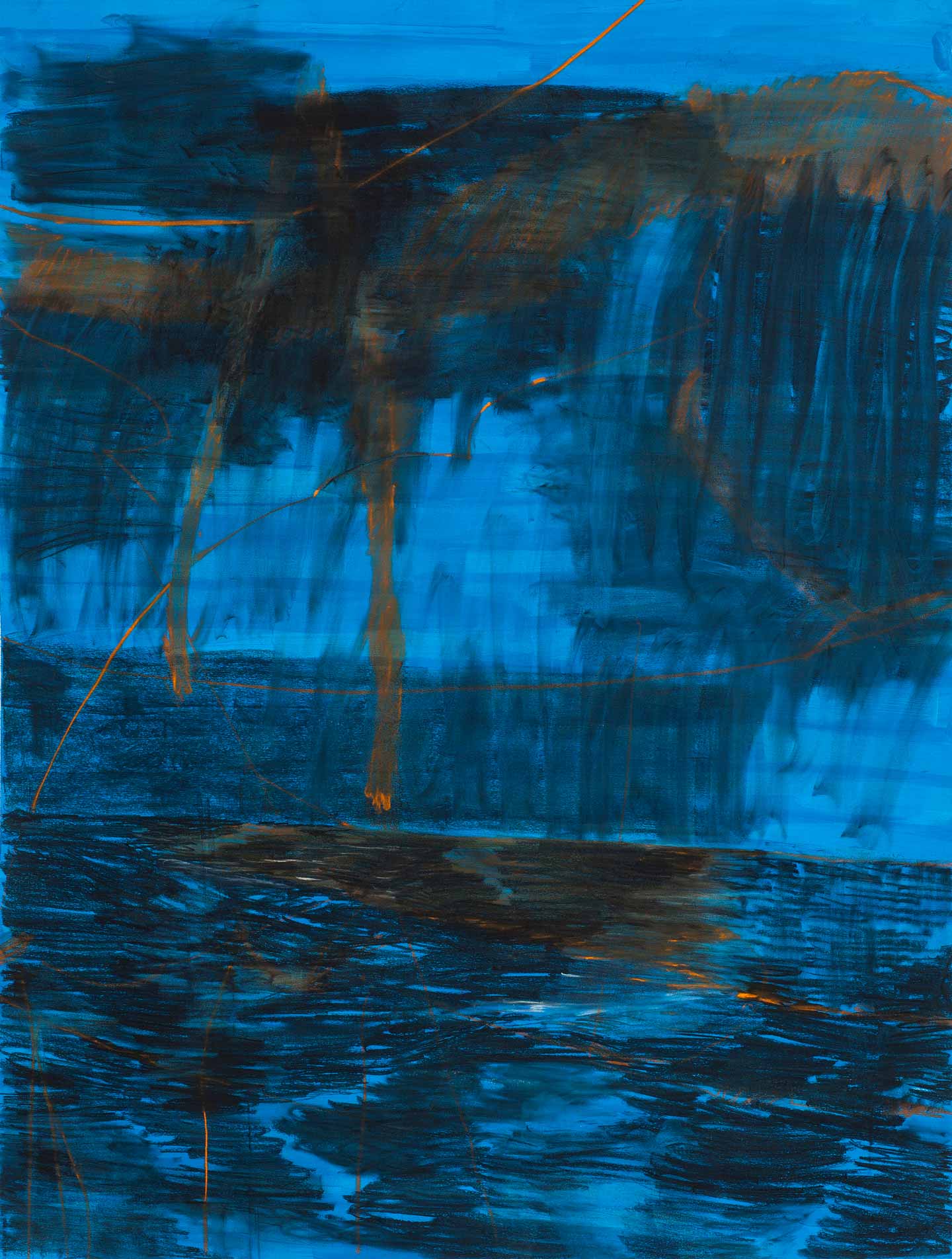 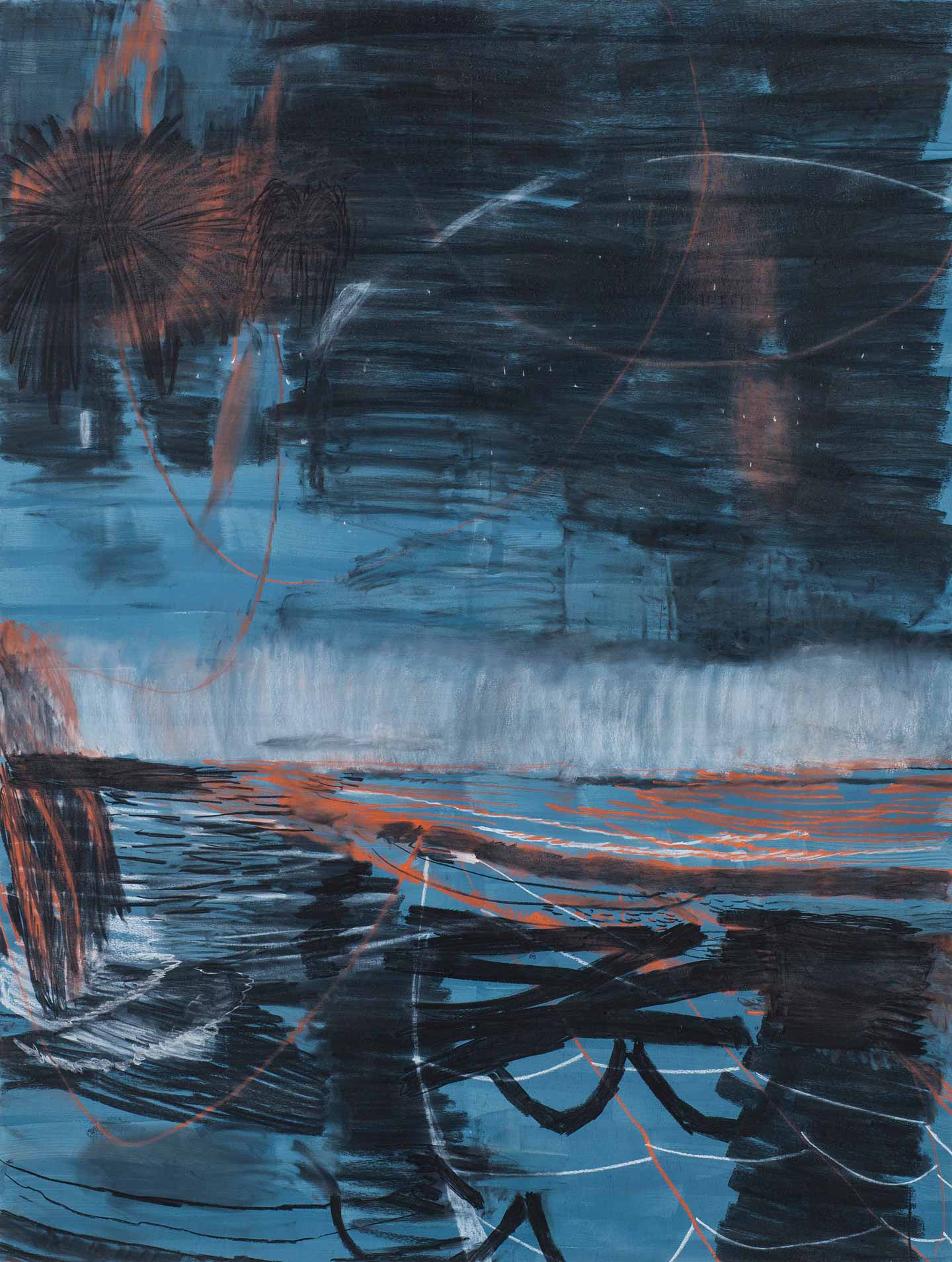 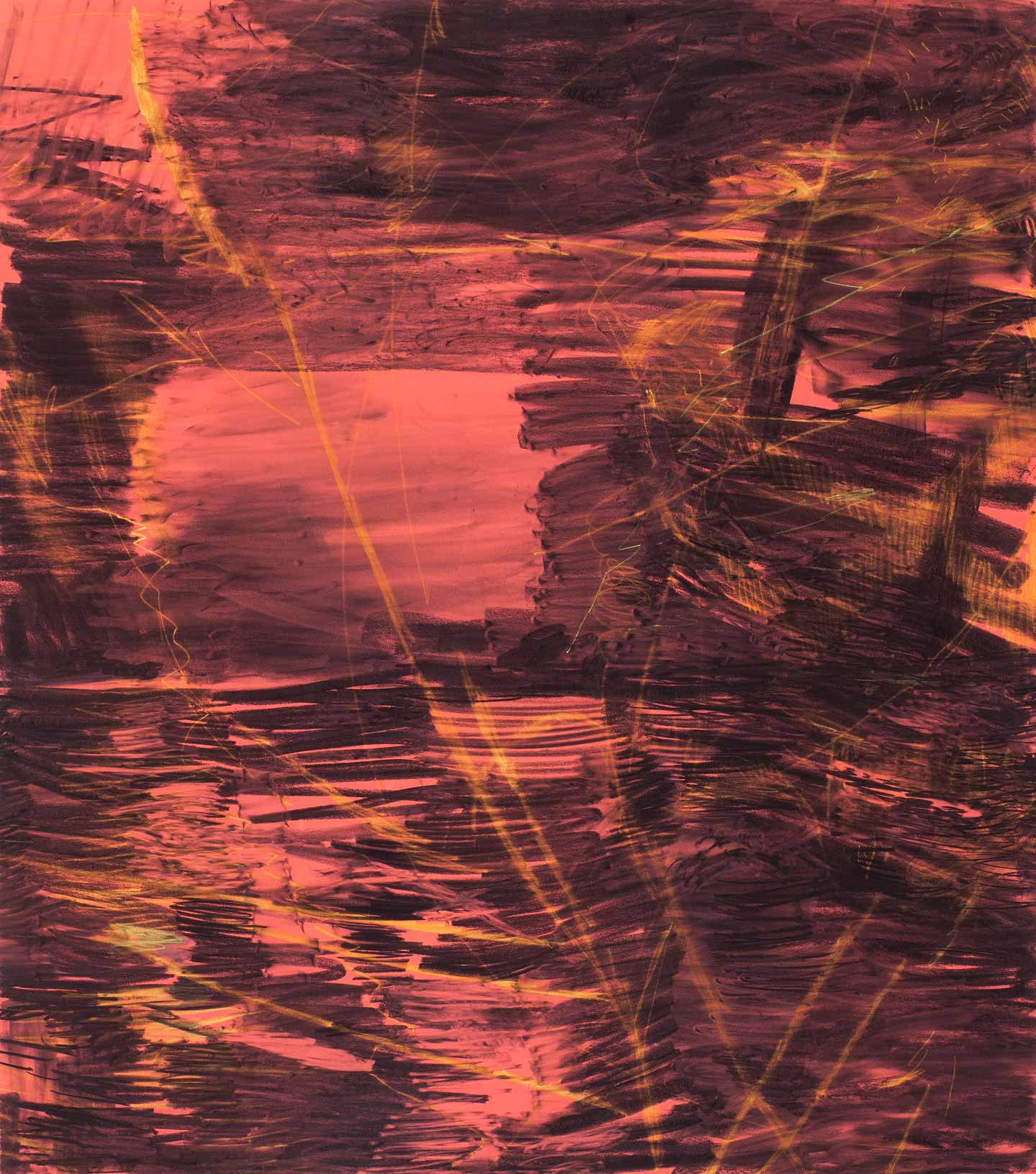 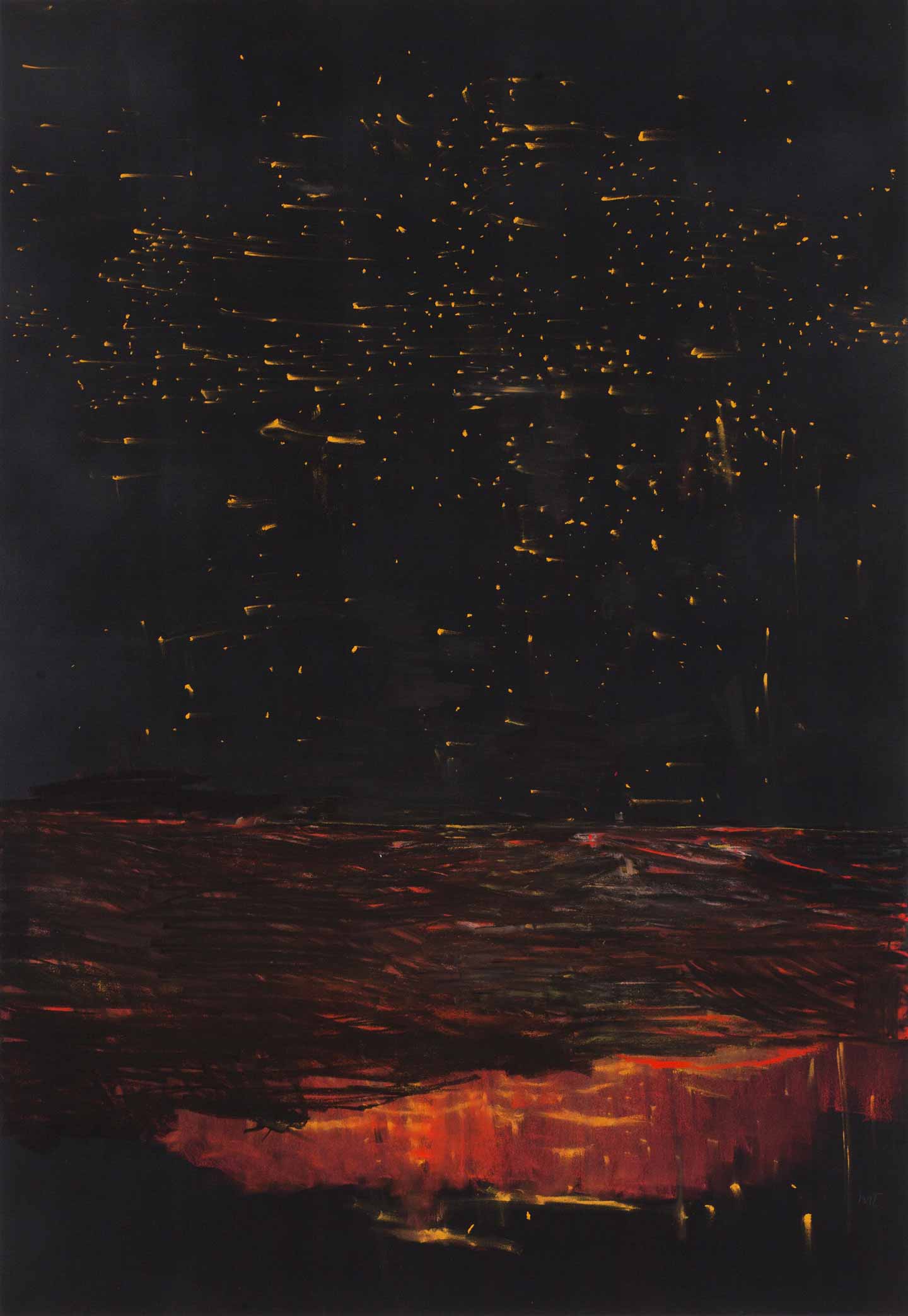 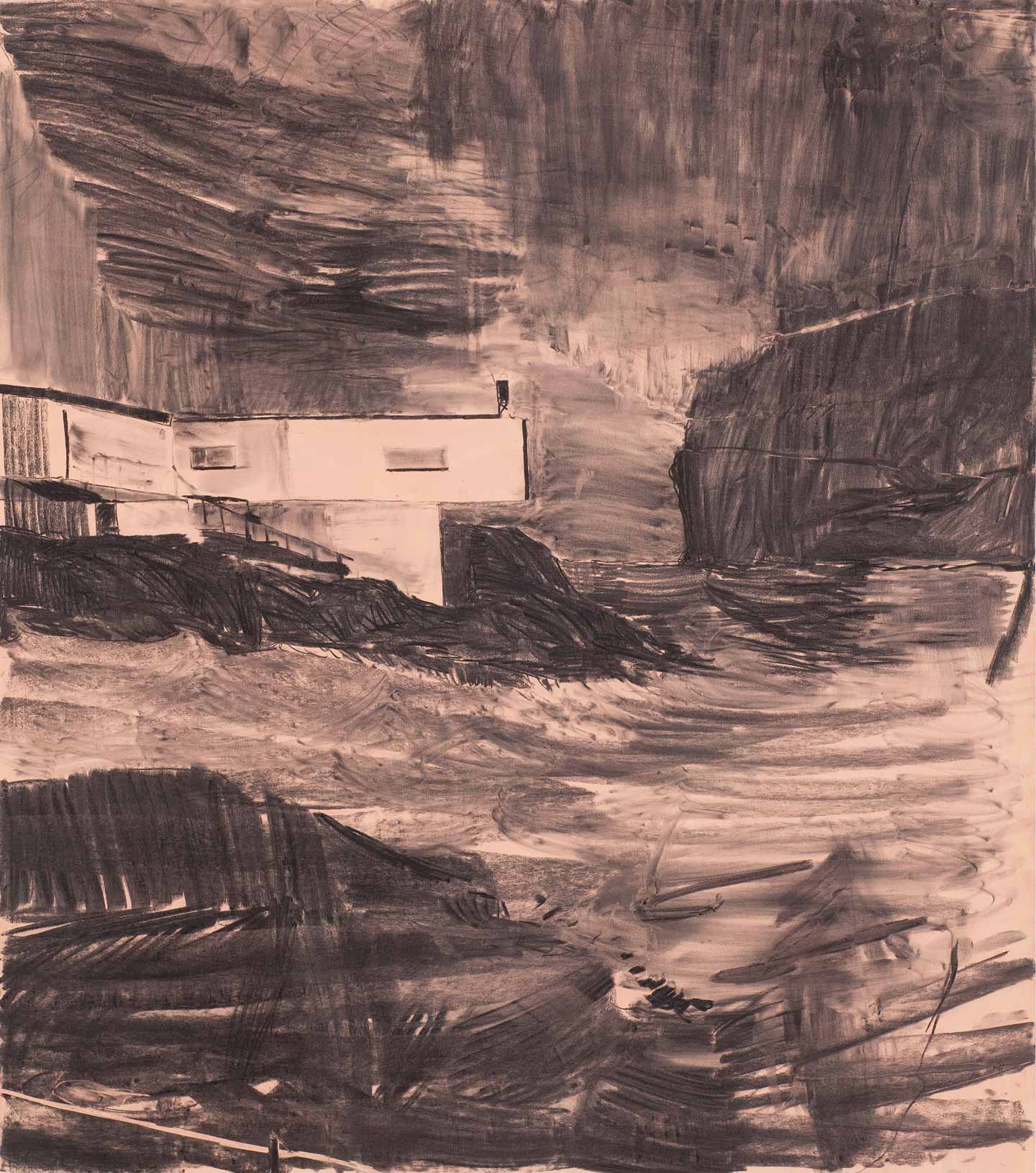 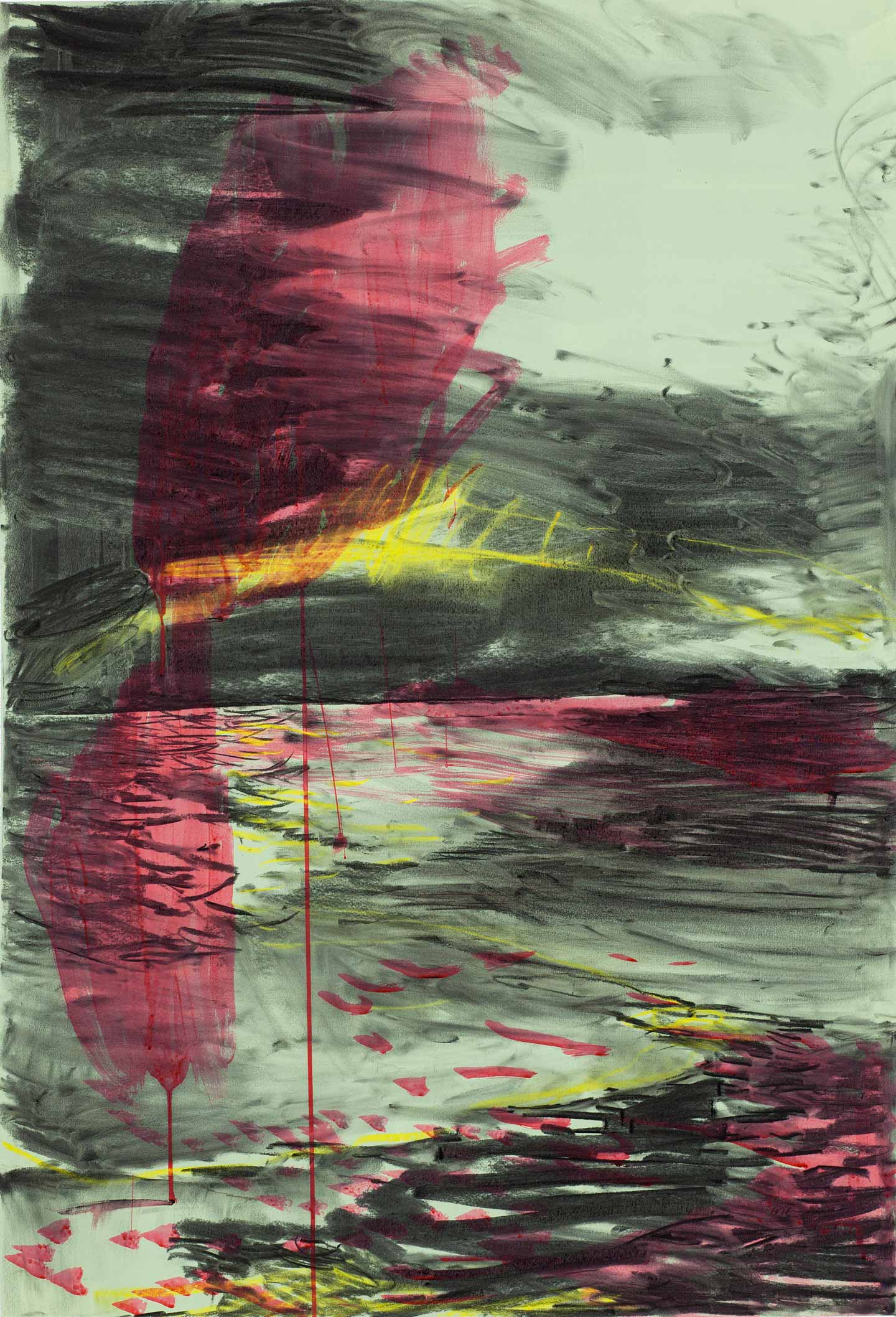 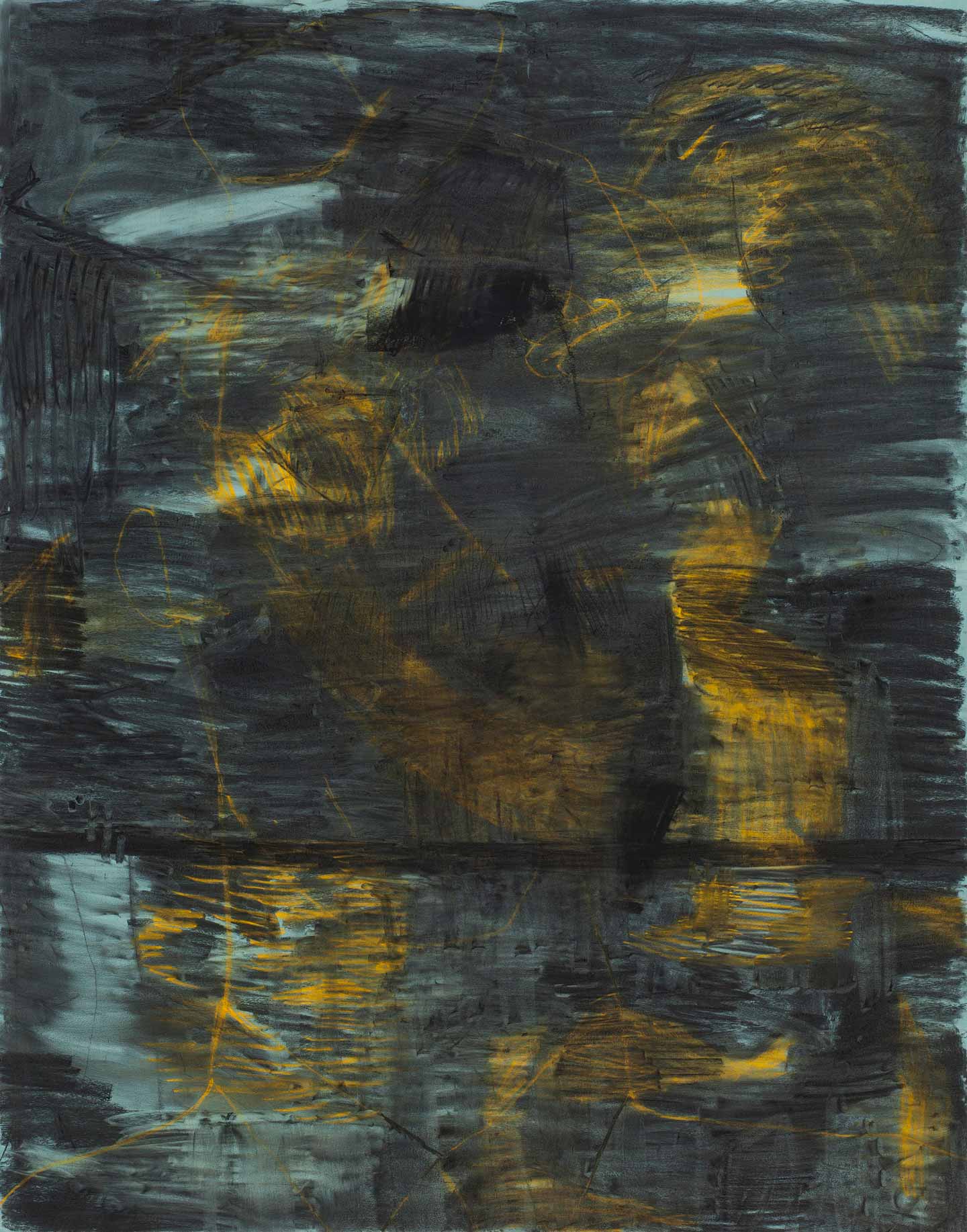 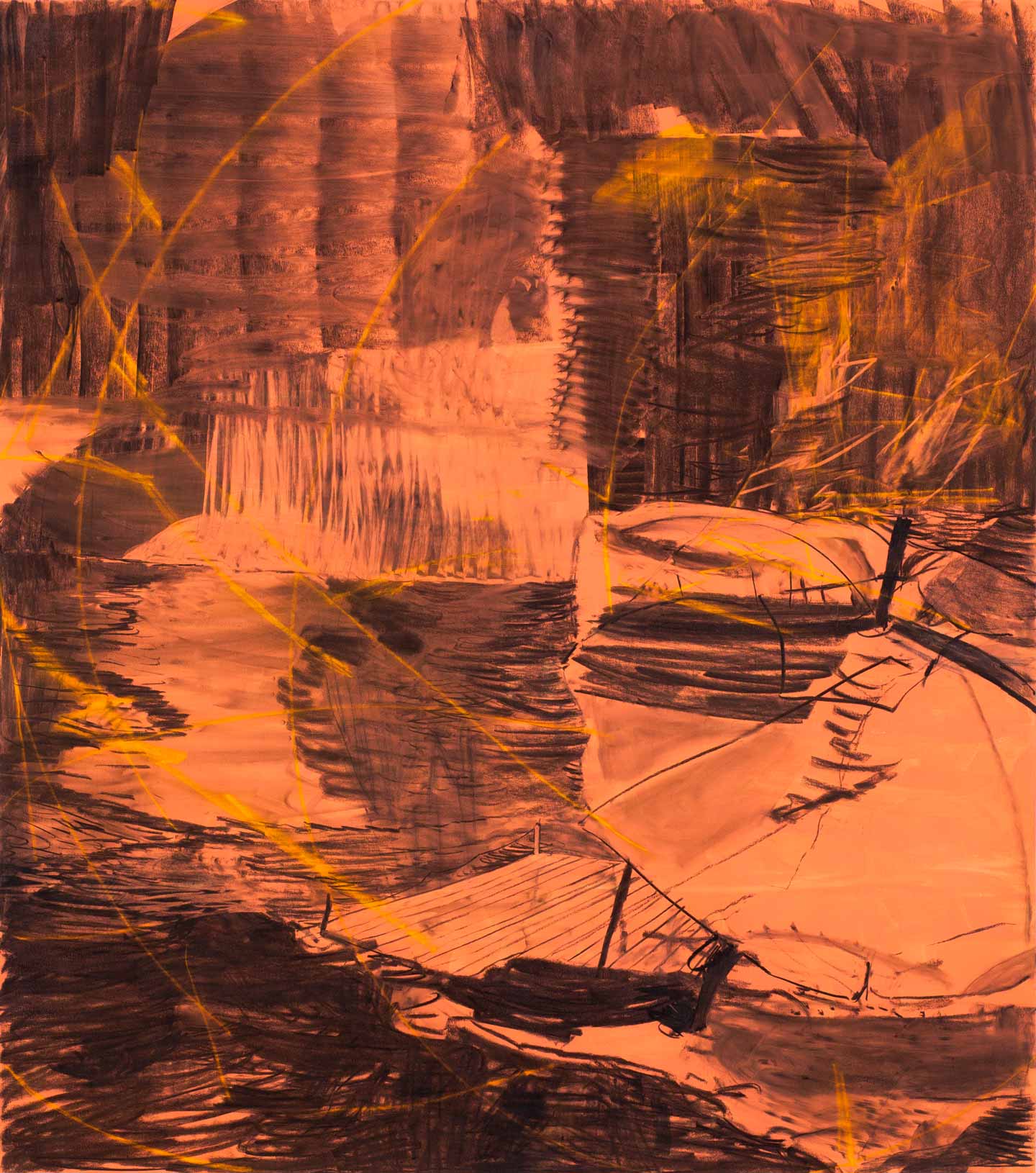 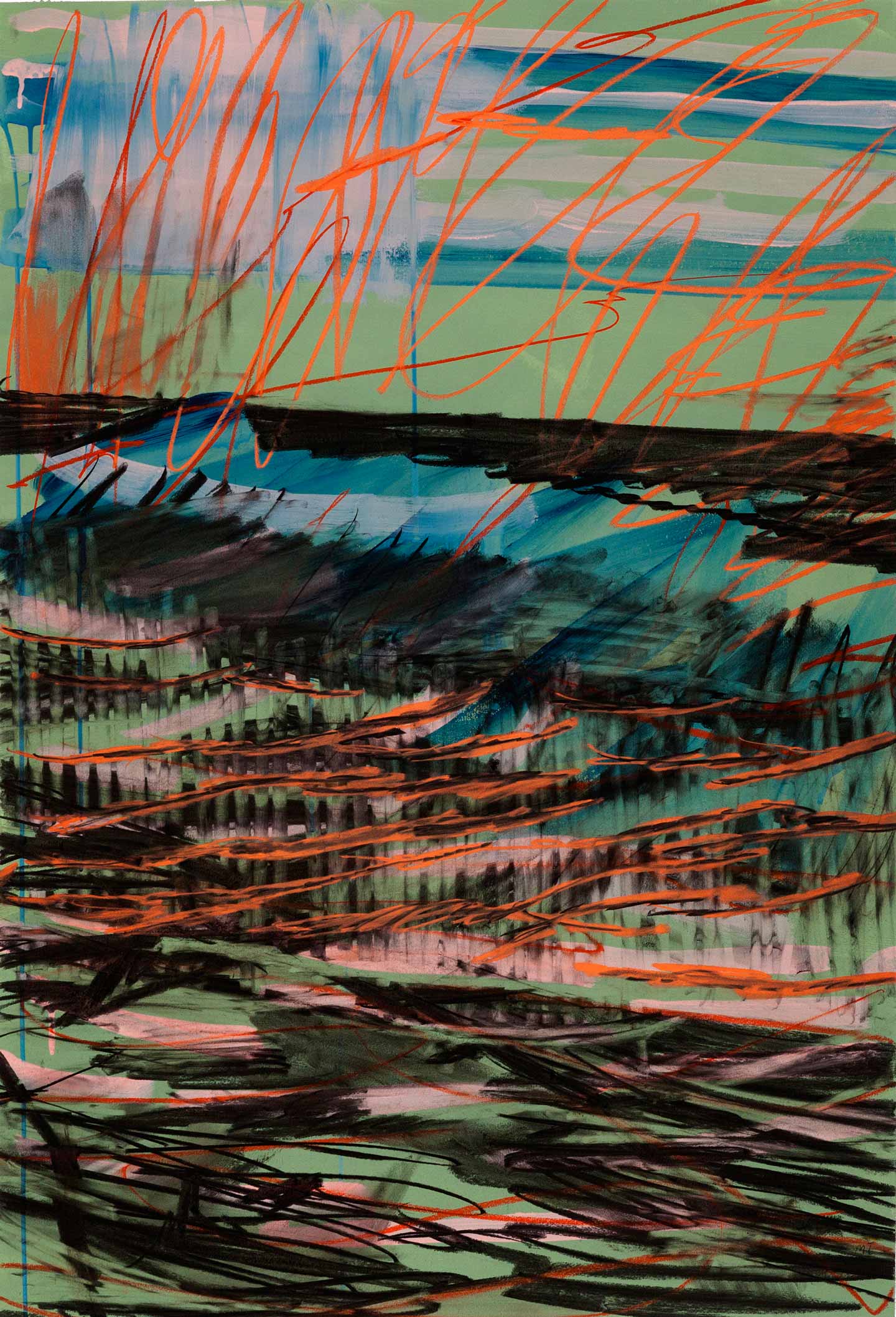 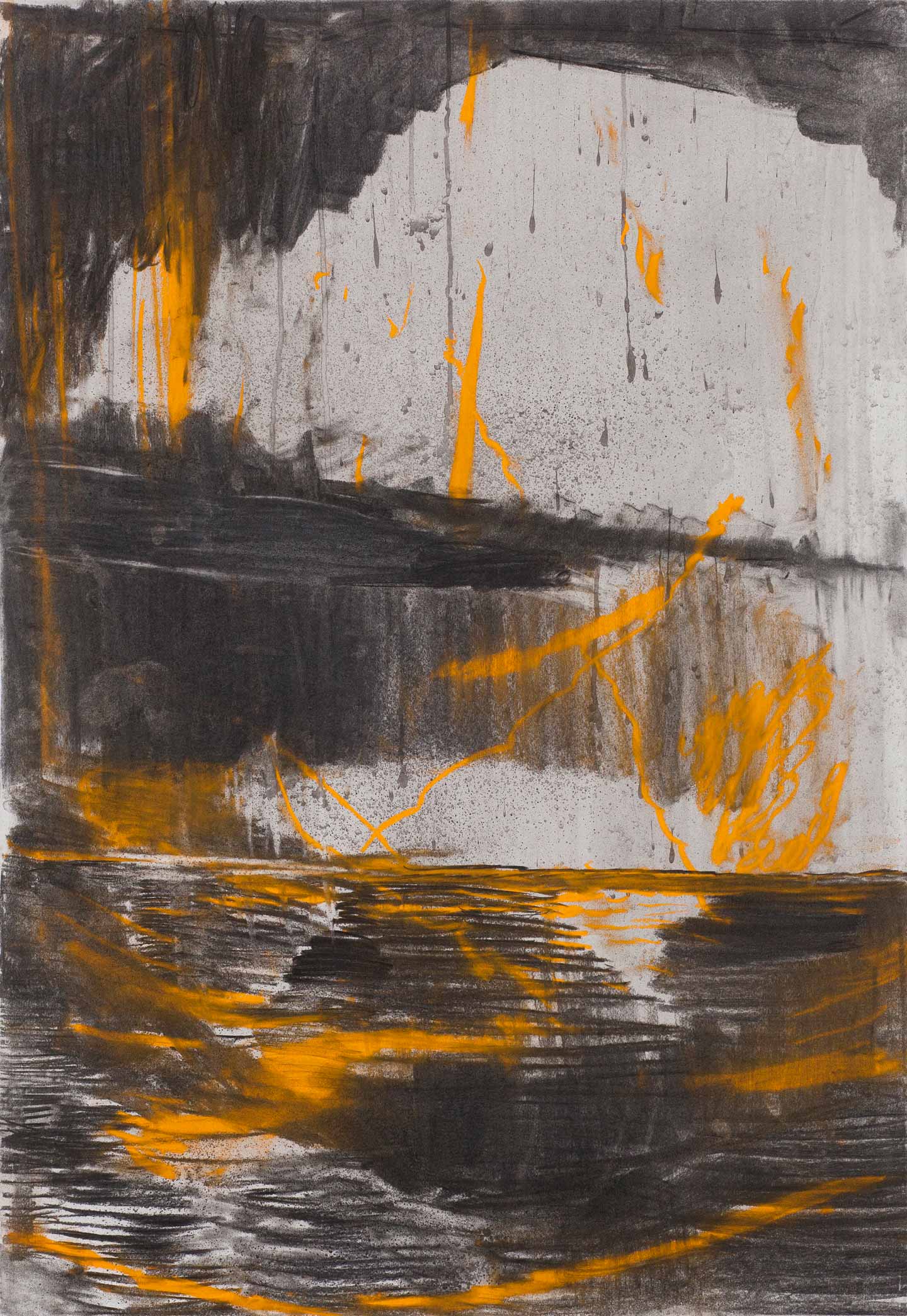 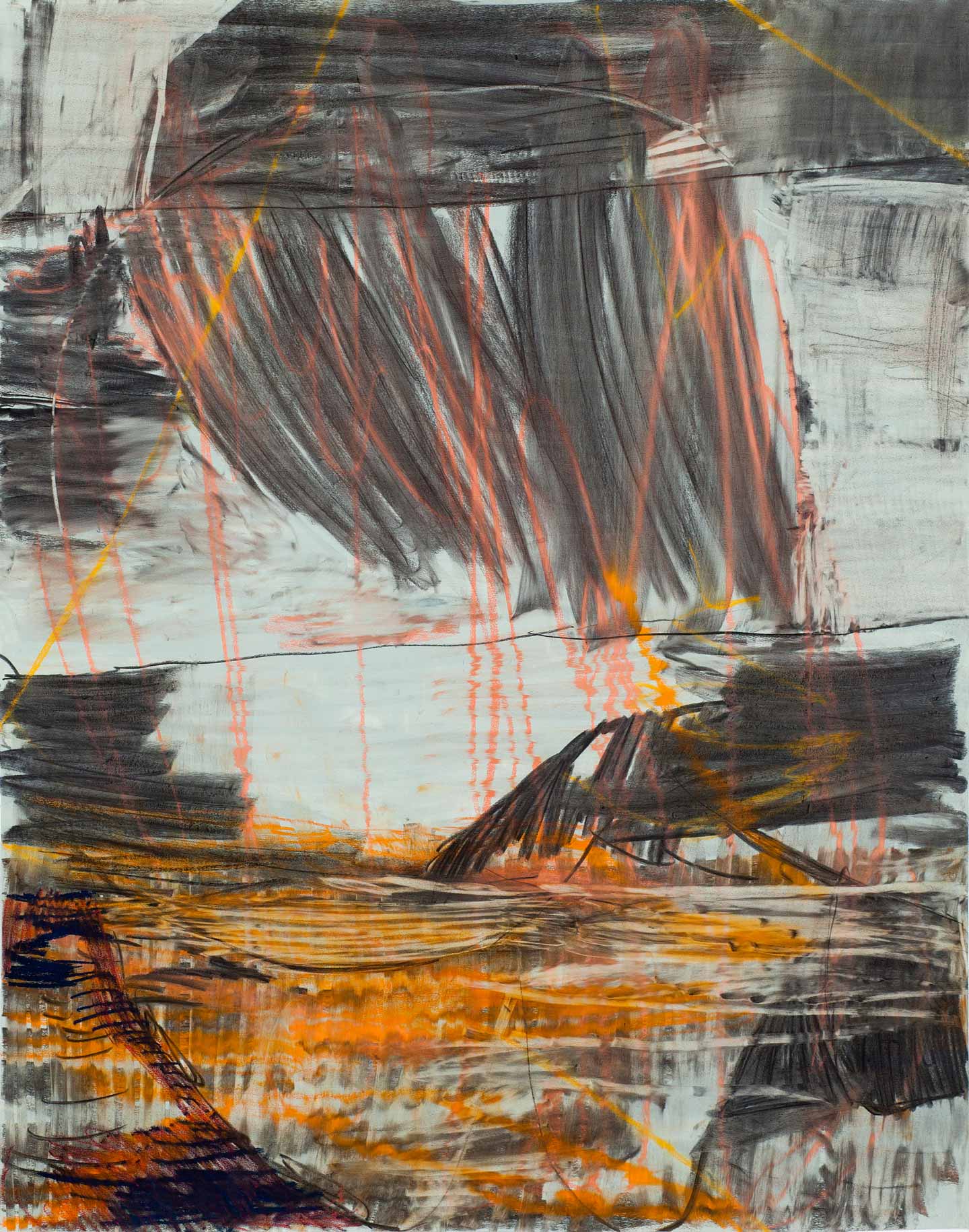 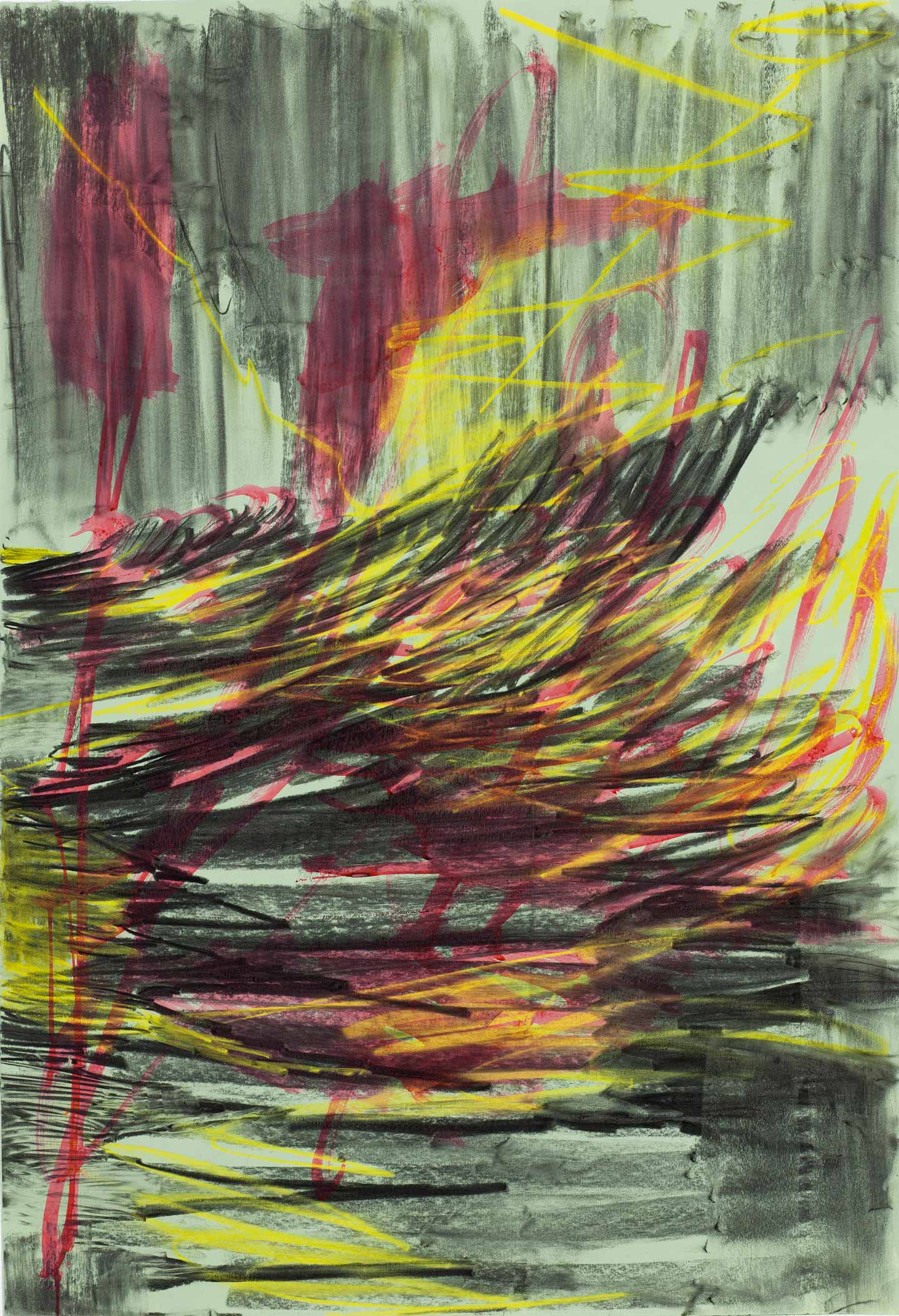 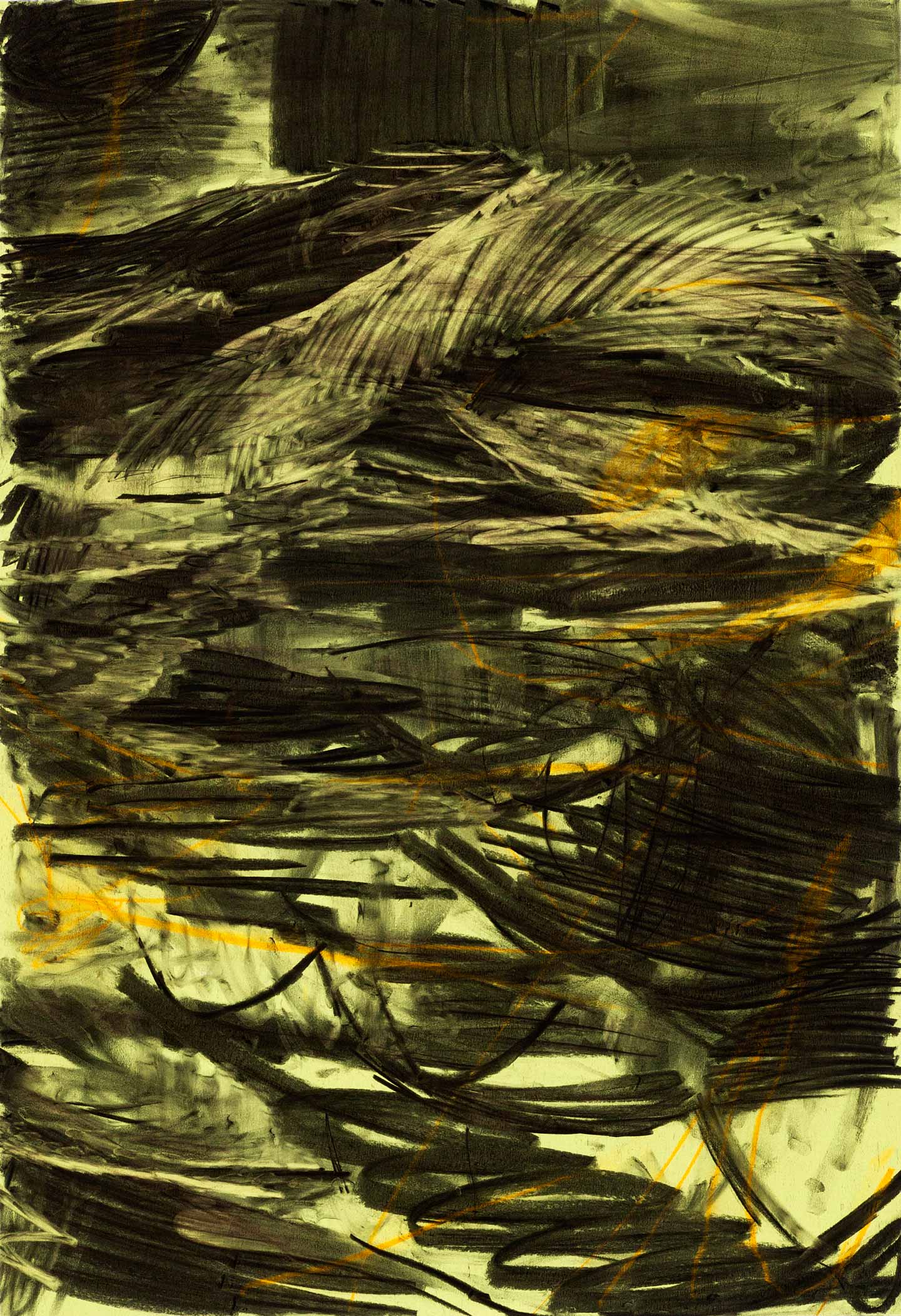 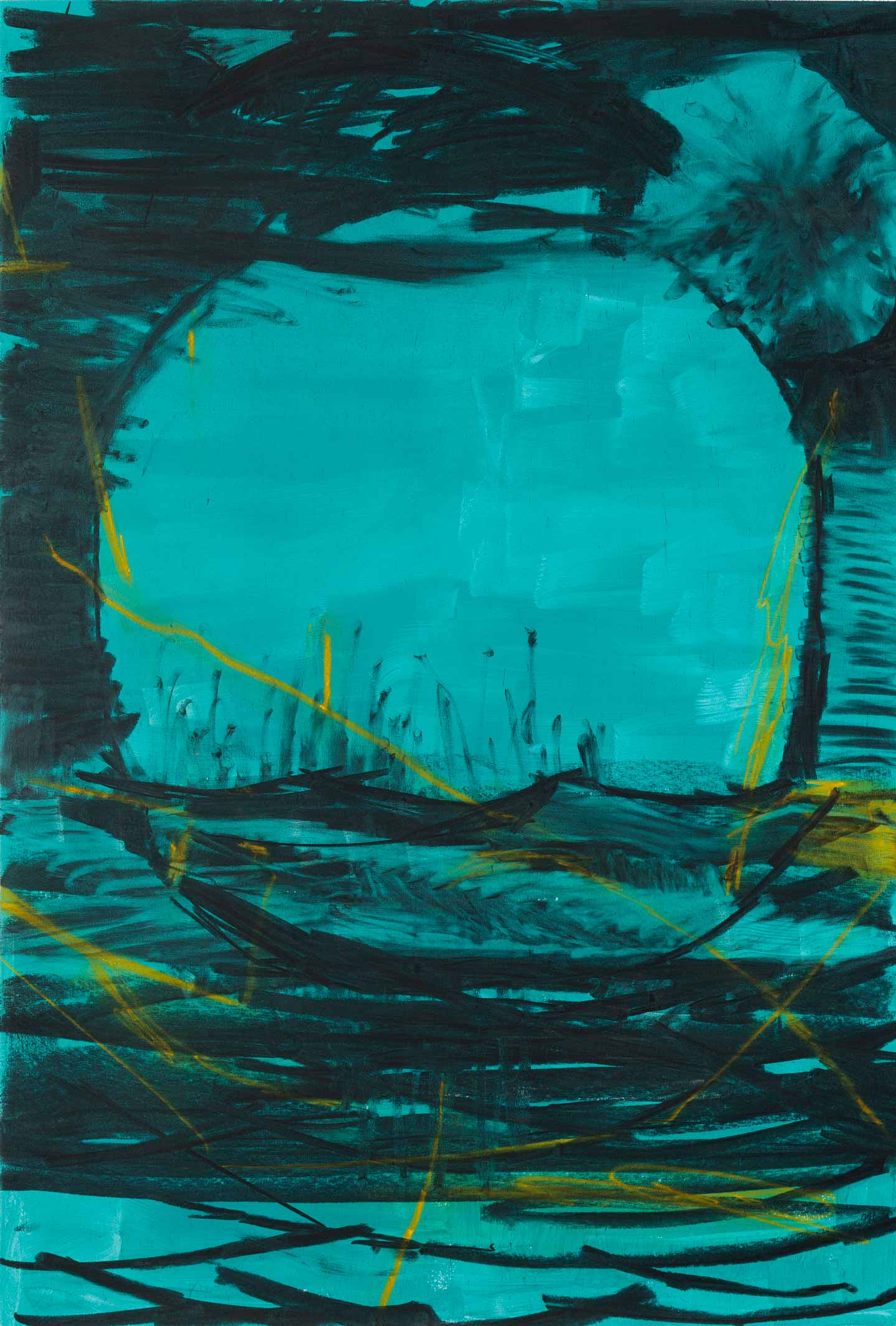 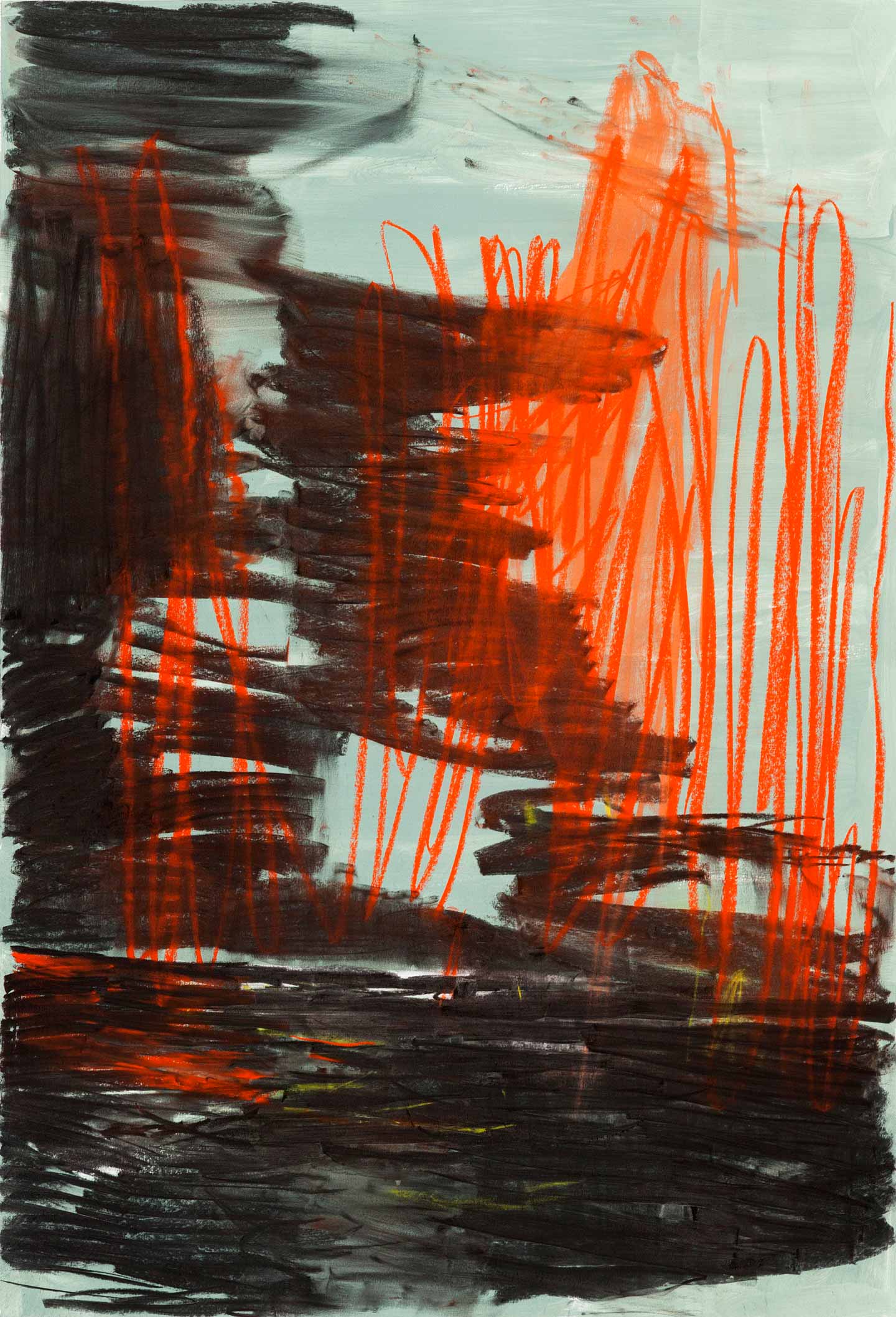 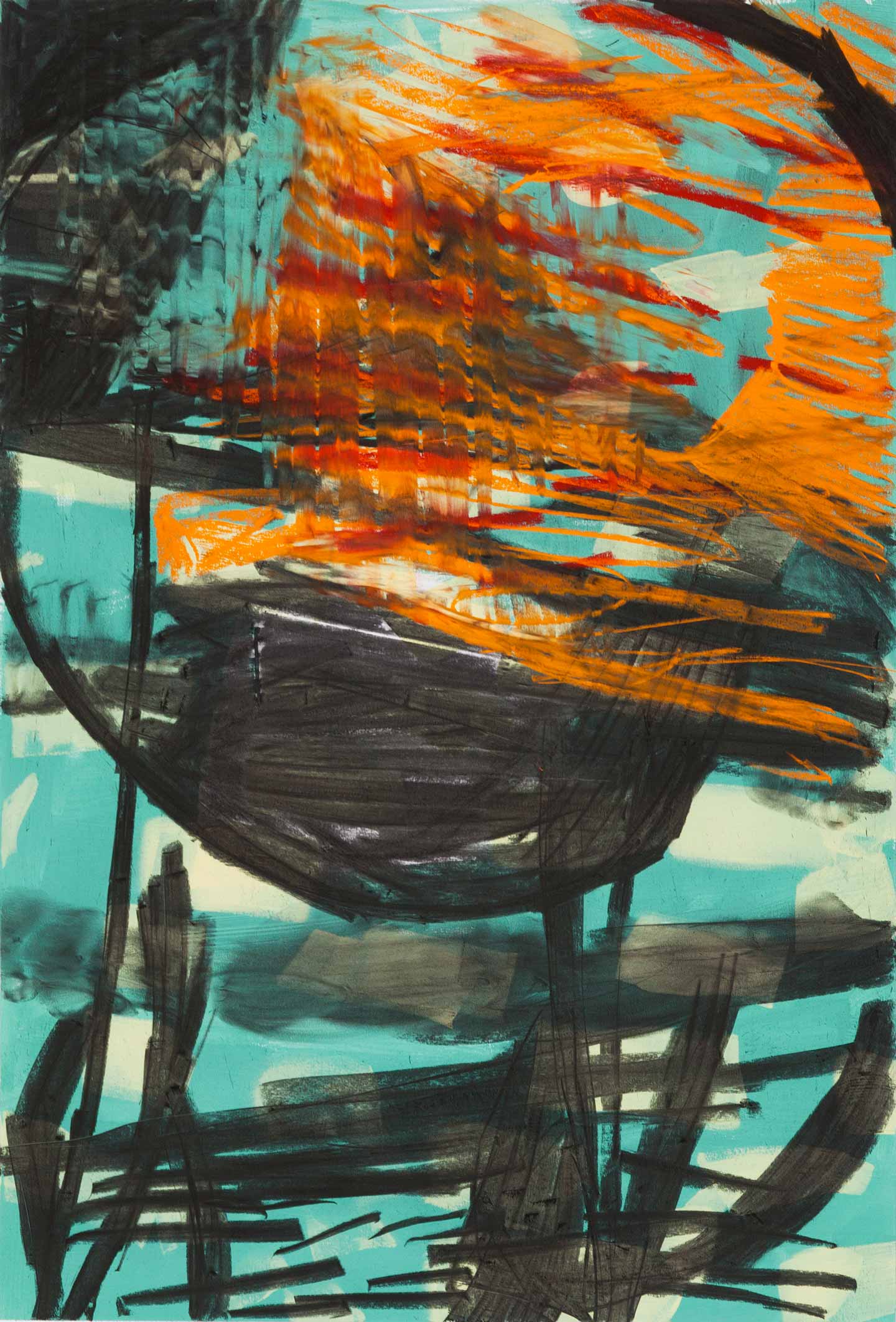 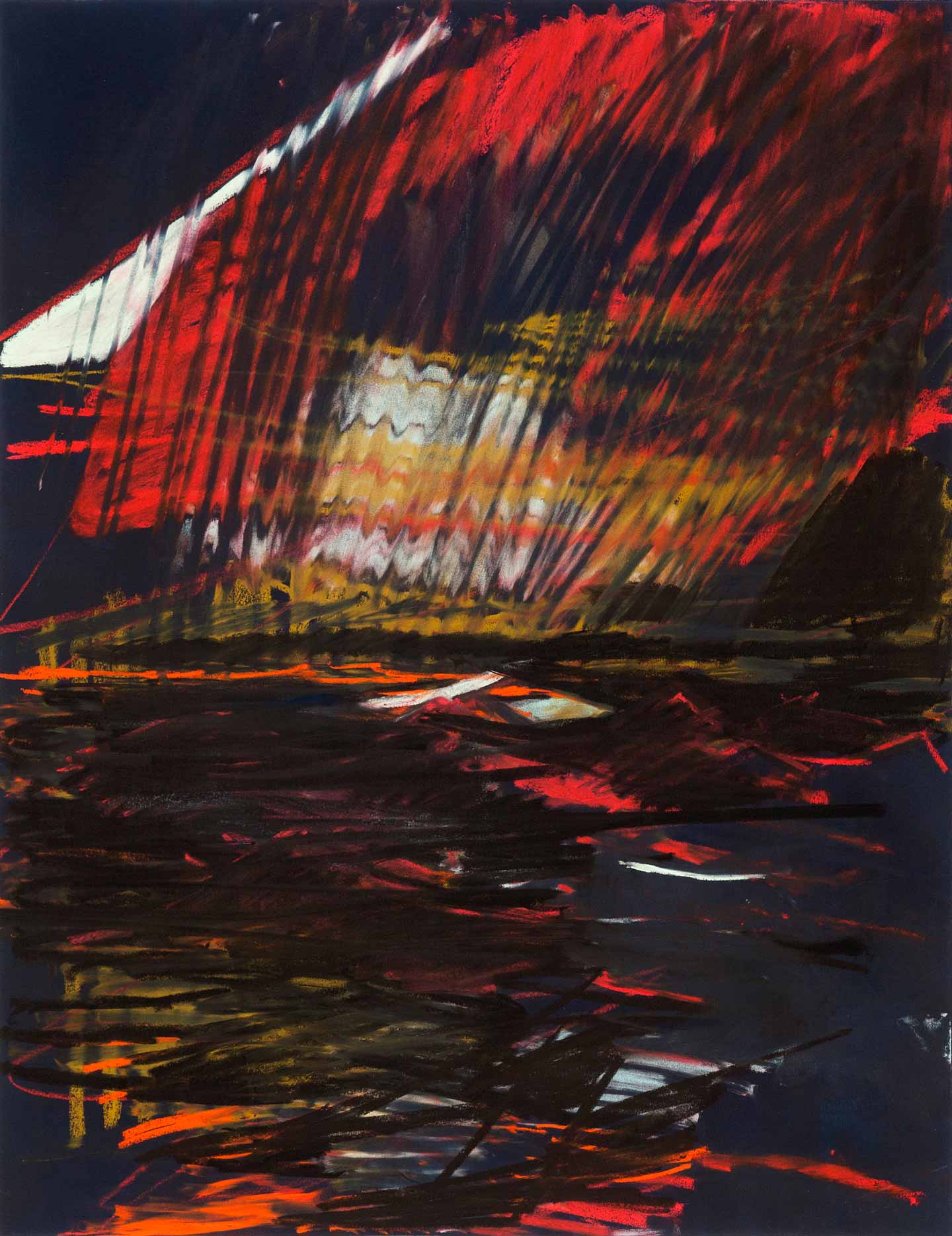 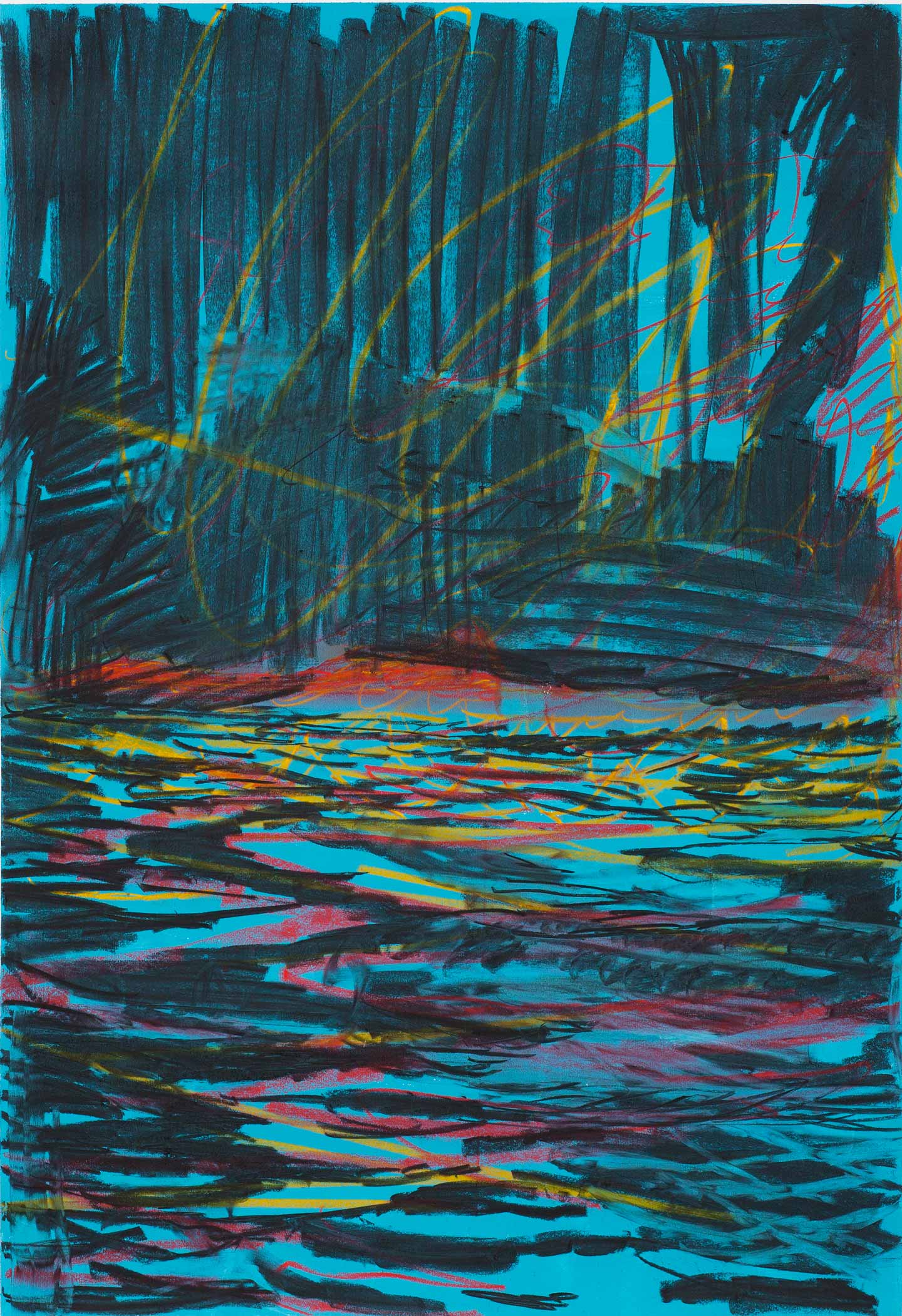 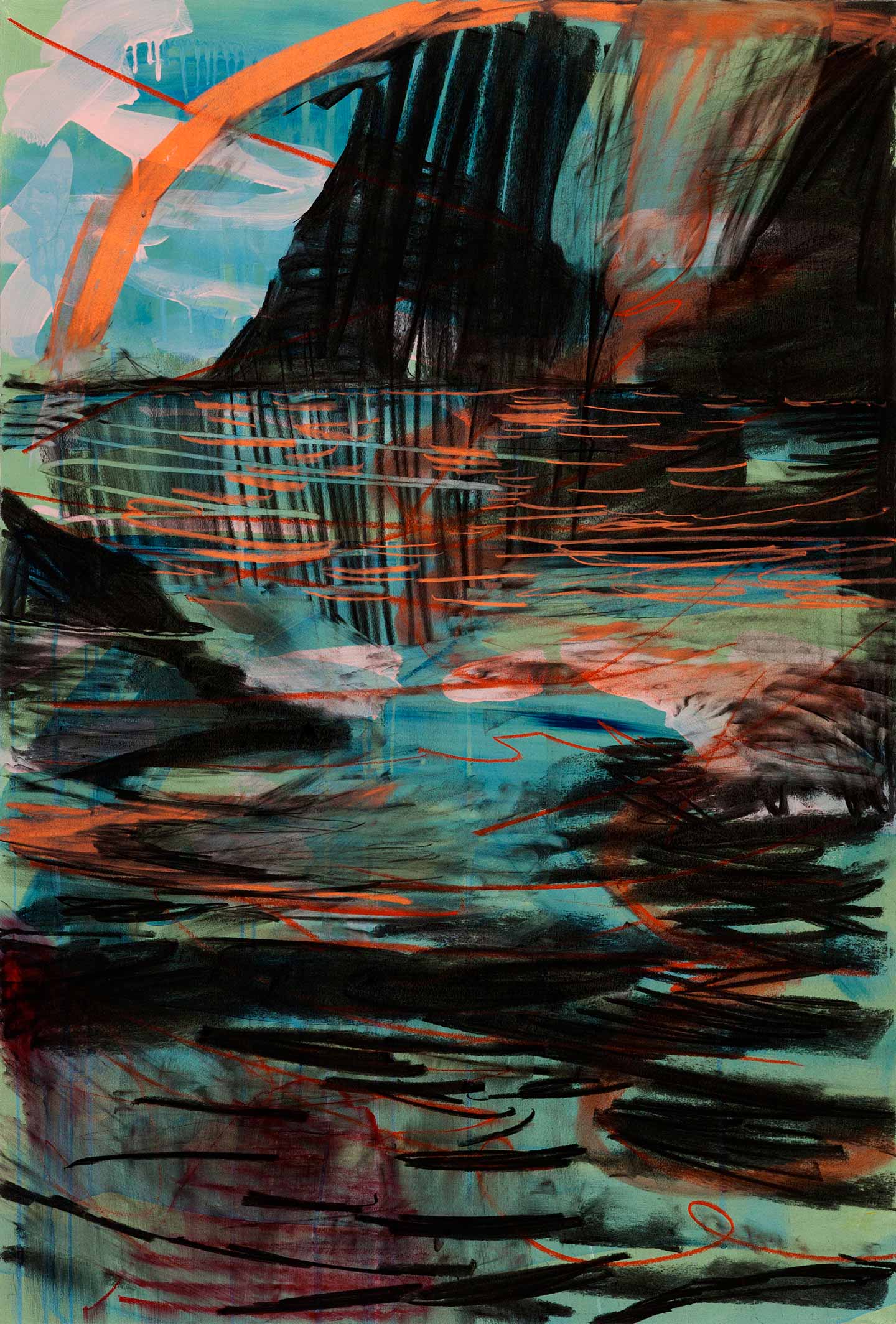 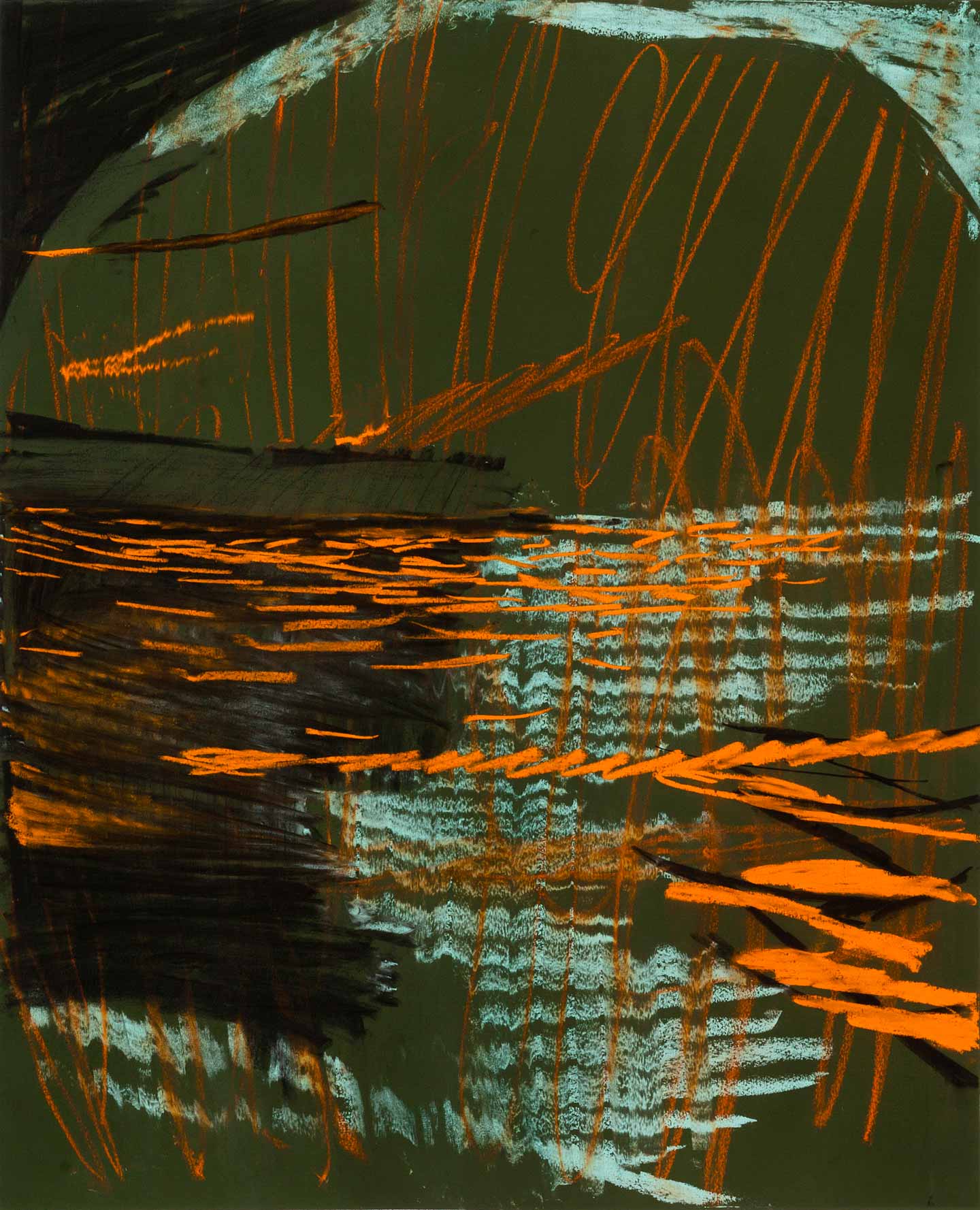 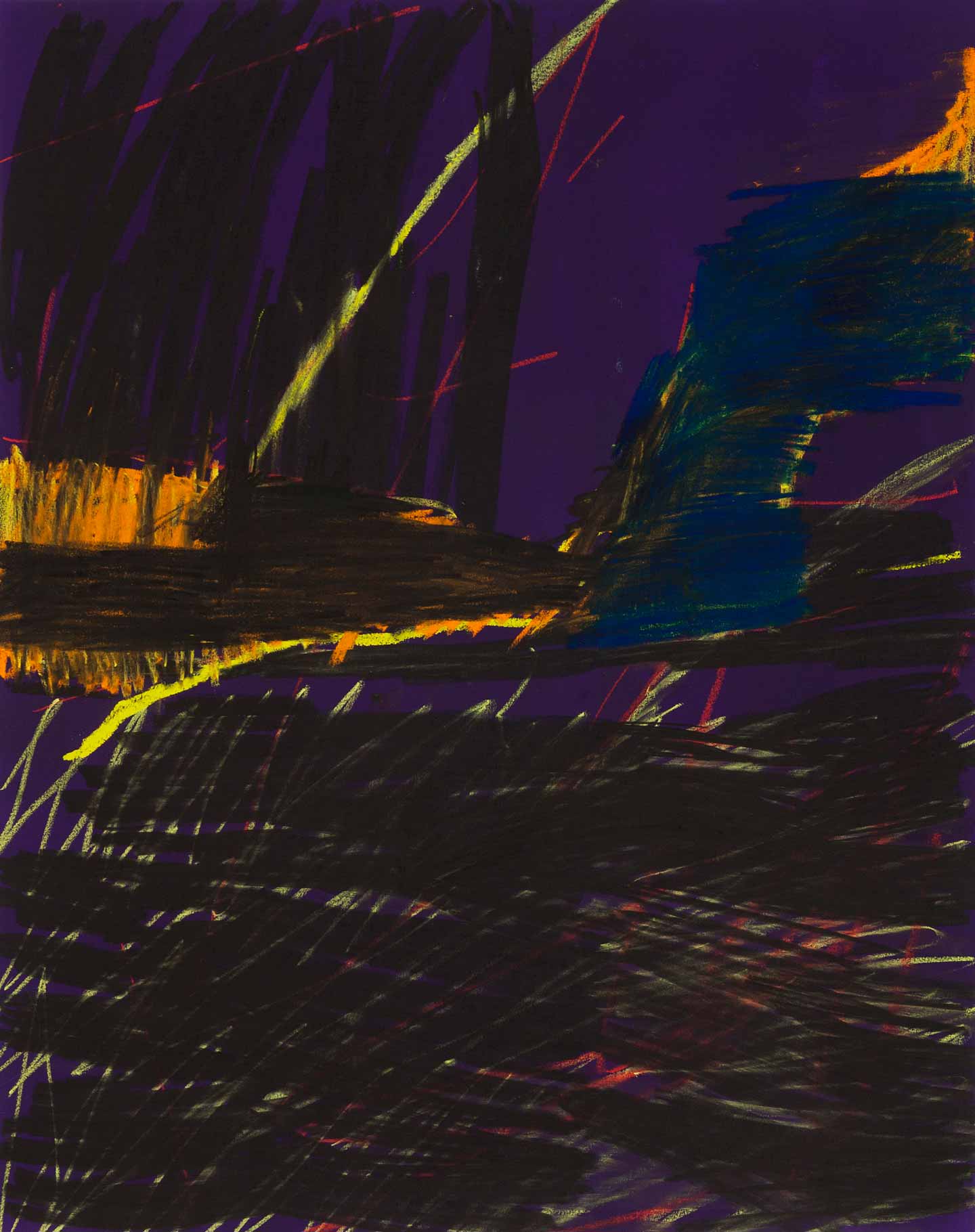 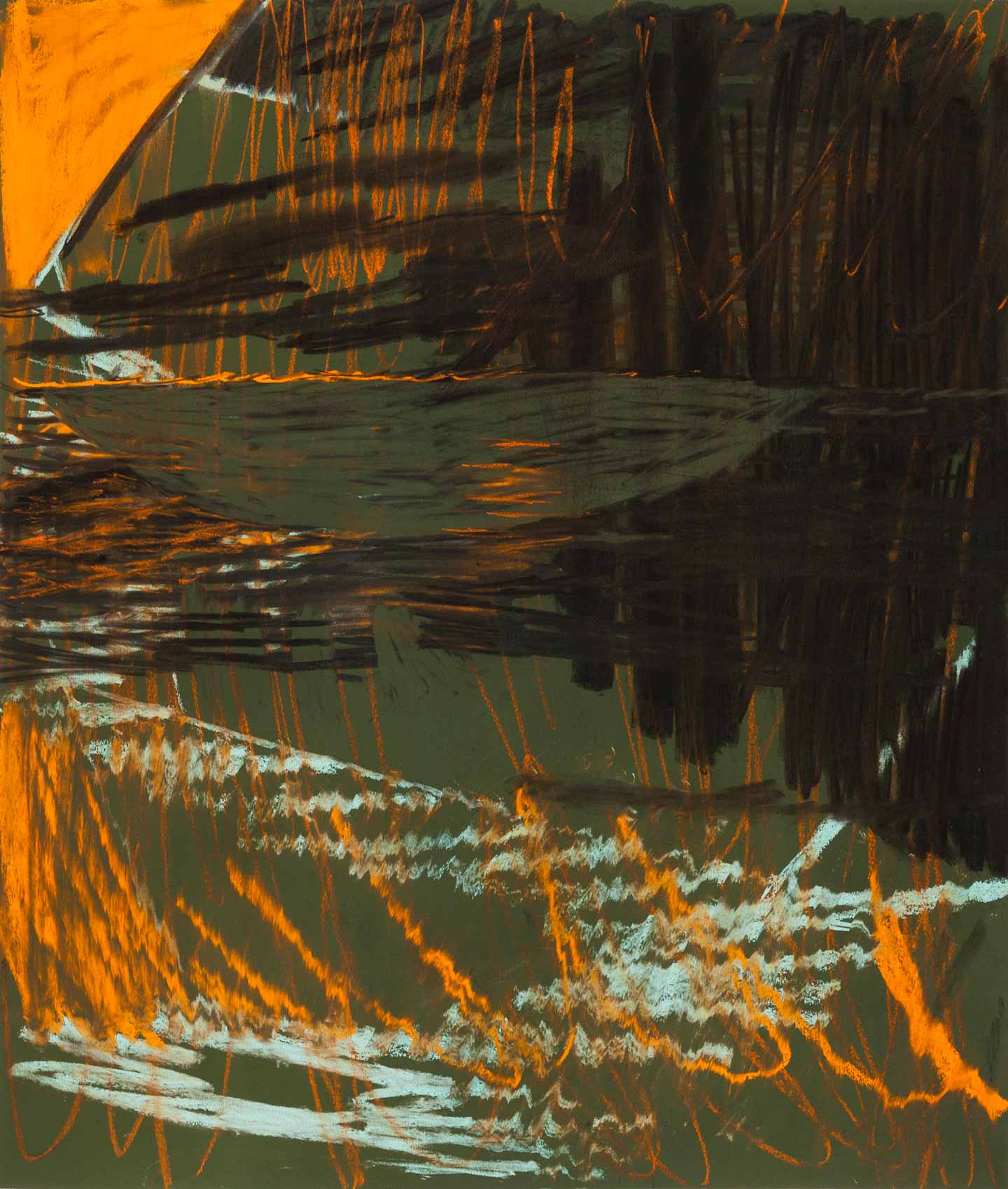 WHATIFTHEWORLD is pleased to present The Night Moves – an exhibition of new work by Michael Taylor. The images in this exhibition take as their central motif the ocean; but onto the shifts and vicissitudes of the water Taylor grafts his own inimitable style of gestural mark-making, and perhaps a fresh angle on landscape painting generally.

The exhibition marks a number of shifts for the artist. Taylor has shown predominantly gouache paintings with the gallery, and his works traditionally have been populated by an awry cast of protagonists and cameo players: fidgety military men, moustached lotharios, leathery theatre doyennes with oversized Gucci sunglasses perched on their noses. In this body of work, figures, types, characters are all absent. And while drawing has always played a key role in his work, this is possibly the most emphatic artistic statement Taylor has made on the importance of drawing as a process. While the works on this exhibition have been made in a combination of Flashe vinyl paint, charcoal and pastel on paper, they remain most decisively drawings: the vinyl paint is used as a ground, and is often dominated by the power and elegance of mark-making.

The drawings build on Taylor’s abiding interest in Romantic ideas of the scenic, the untamed landscape and overblown tragedy. As he is in the habit of doing, the artist sends these images out into the world with endlessly entertaining titles: Vanilla Drowning, Pacific Shootout and Wishbone Reef all suggest that these are fragments of a larger maritime narrative. Yet the finer details remain sparse, as Taylor takes a deliberate step away from storytelling in this body of work. As he says, the works are ‘not devoid of narrative, of course… but visually, narrative hides behind the language of the drawing process.’ The audience may begin to ask themselves whether a vague triangle on the horizon of one work is a coastal mountain, looming up at sailors through the mist, or indeed the mushroom cloud of an atomic explosion in some mid-century series of bomb tests; or whether the vermillion striations in another drawing are just gestural marks, or the arcs through the night sky of distress flares. The answers remain tantalisingly out of reach, and, as in many of Taylor’s works, one senses that the artist is not so much unwilling to give us a coherent picture of the world, as he is keen to challenge our need for one in the first place. Fragmentation, snippets of narrative and intentionally suggestive titles create a shifting mosaic of a story, somewhere between Rodgers and Hammerstein’s South Pacific and David Lynch’s Mulholland Drive. Narrative is always a fiction, Taylor seems to say; art can either prop up the lie, or begin to pick through the ways in which literature, cinema and especially painting work to trick us. I often get the sense that Taylor’s images are dissolving in front of me, formally as well as in terms of their plotlines. They appear to fall apart and break up into slashes of colour and line; he’s inviting us behind the curtain, to see how the theatre of painting and drawing is a construction.

In a sea of didactic contemporary art, it is worth noting that Taylor has returned to (‘revisited’, as he puts it) his influences of Cy Twombly, Robert Morris and Edvard Munch. From the first two, he rediscovers key tropes of formalist drawing: dense thickets tone, and lines drawn using the whole arm, the whole body, rather than just the wrist. The beauty of the calligraphic mark is often unmediated and powerfully immediate. Yet, it is through his sampling of Munch’s cynical take on landscape painting that Taylor’s body of work rises above mere formal experimentation. Taking his cue from the great Norwegian painter, Taylor inflects his images with a pessimistic version of the sublime; in his vision, the landscape, or, in this case the swelling seascape, is a site of angst and anxiety, rather than wonderment and romance. Caspar David Friedrich’s metaphysical realm gives way to squalls at sea, wandering sailboats and tepid fireworks displays. Taylor interrogates our romanticizing preoccupation with the sea at the same time as he asks us to reconsider landscape painting’s position in a tumultuous global moment.