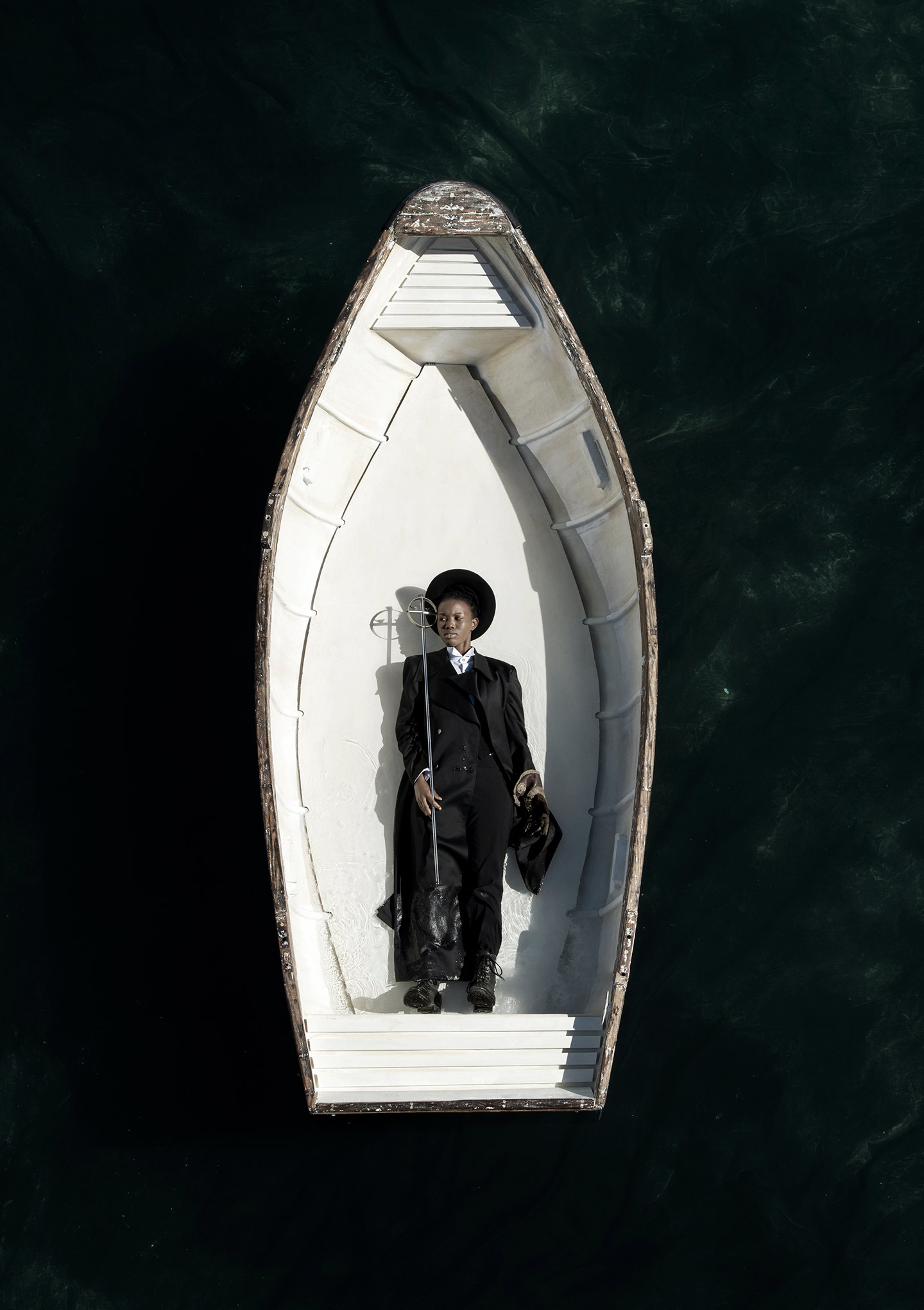 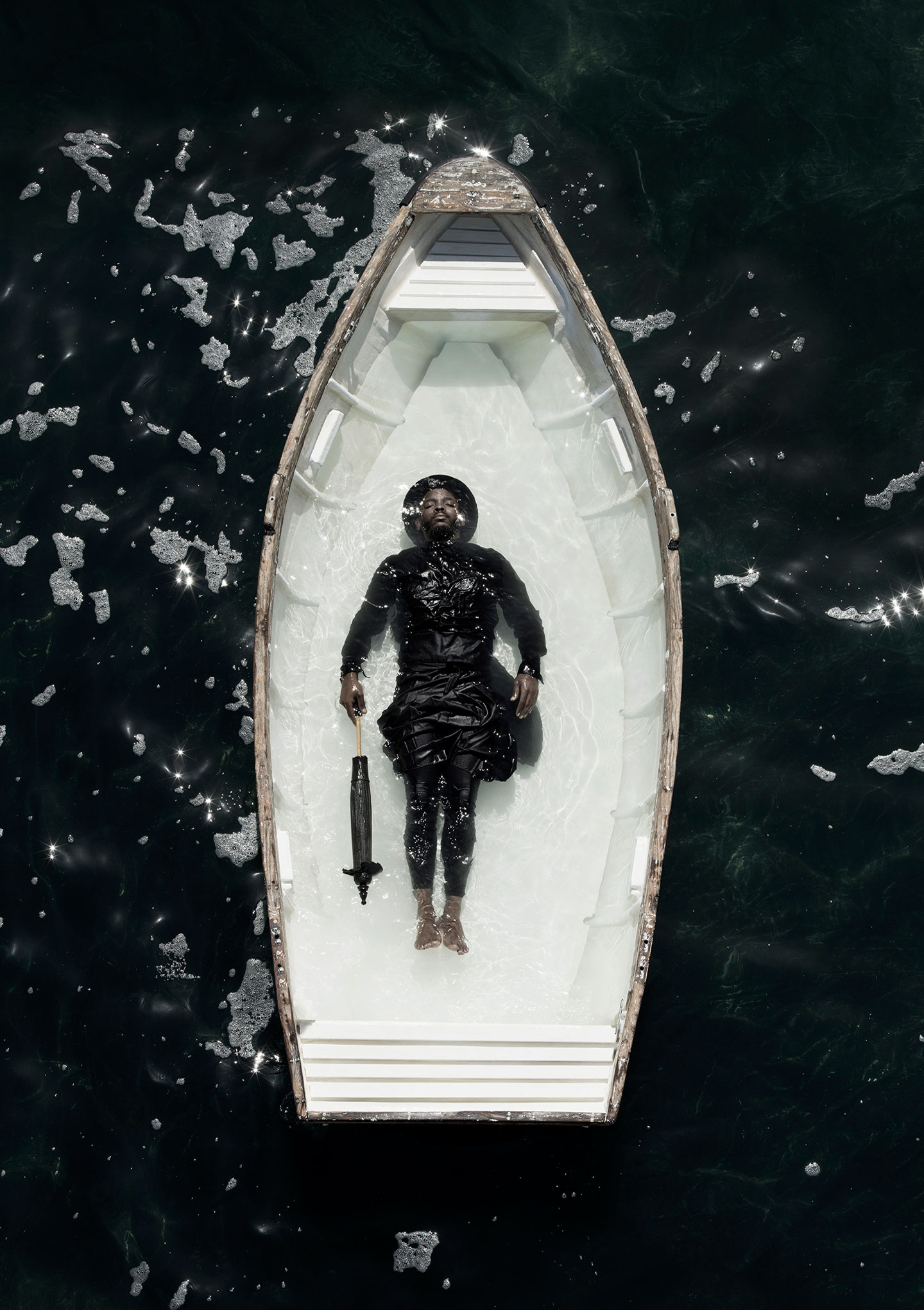 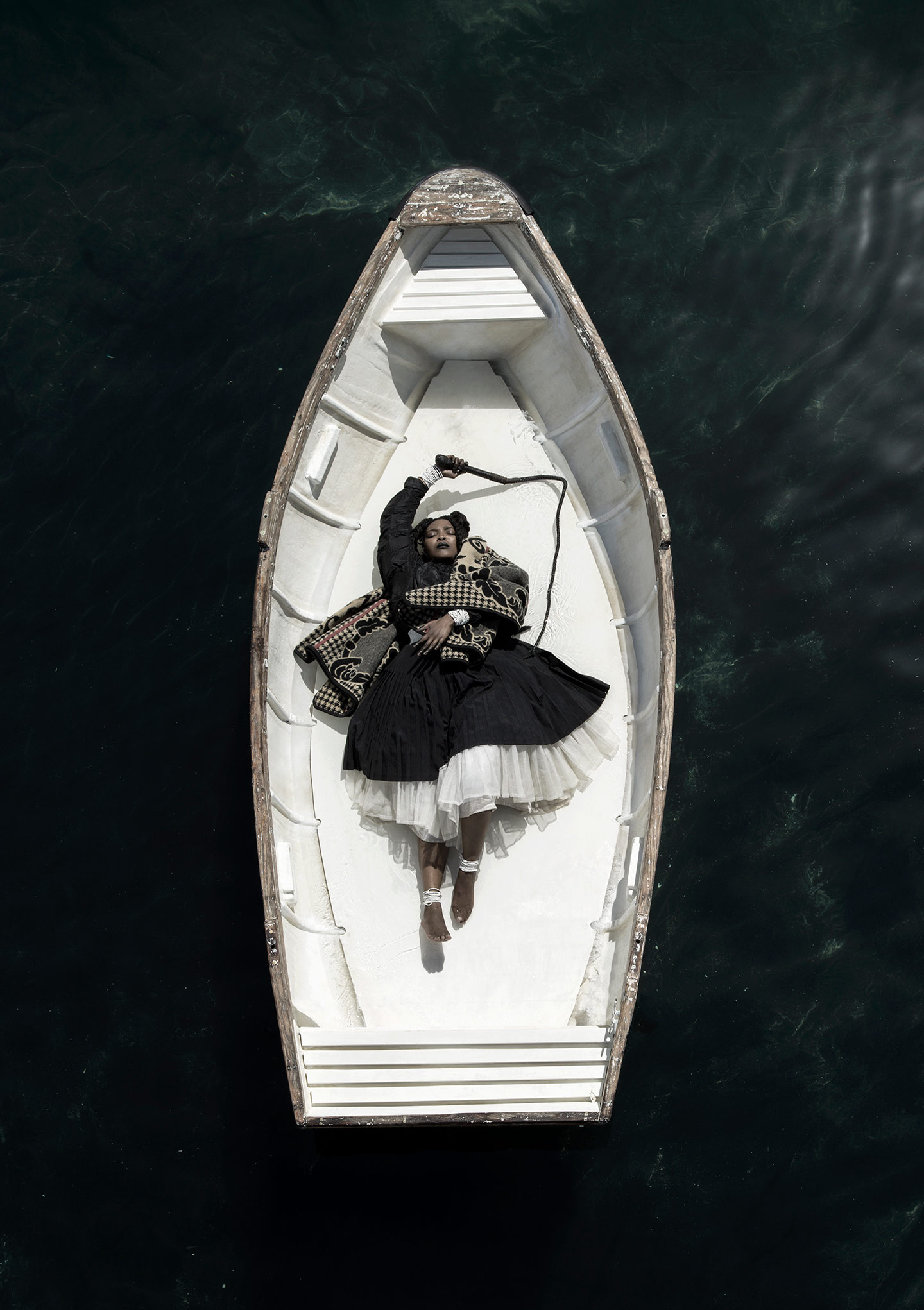 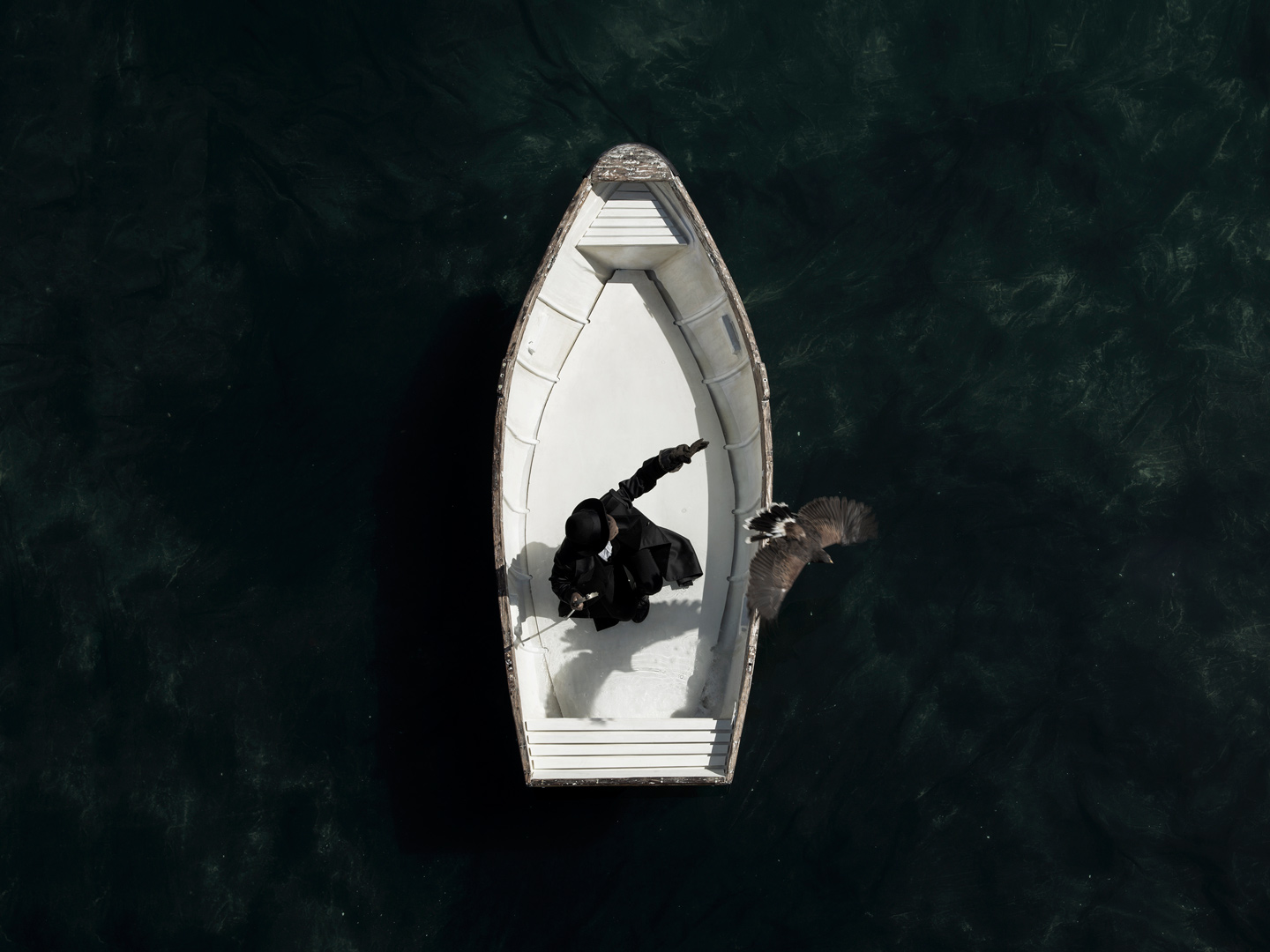 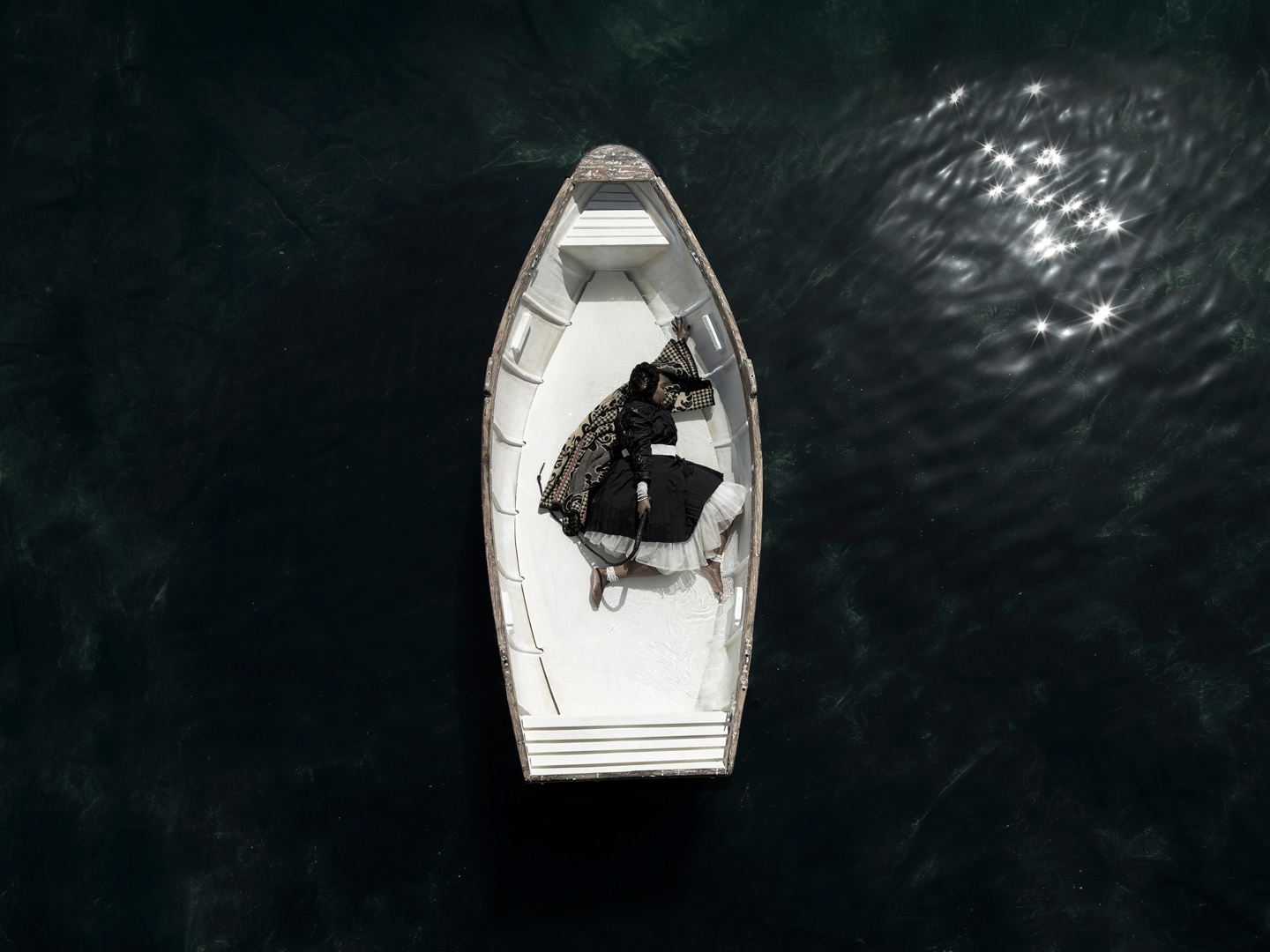 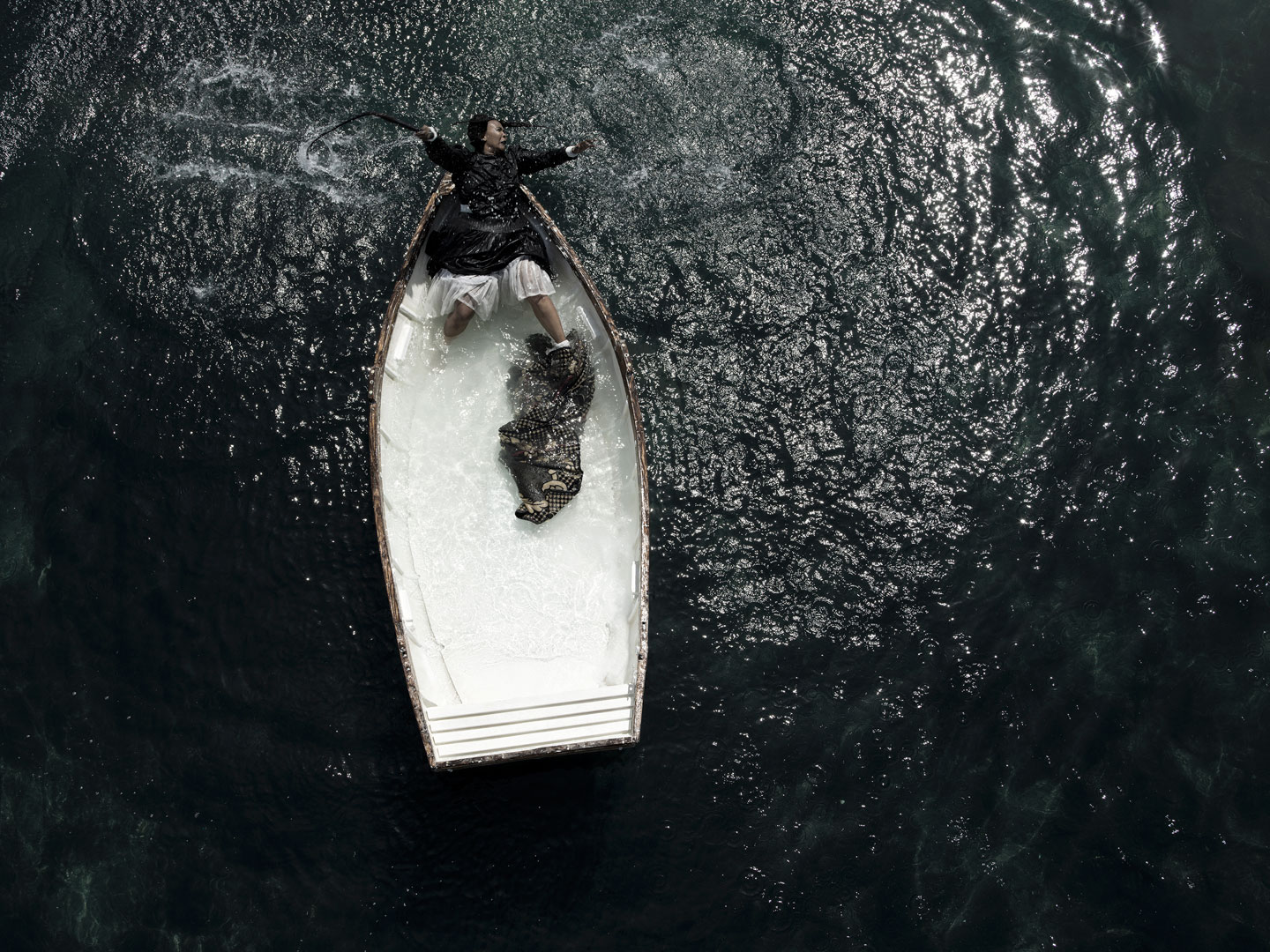 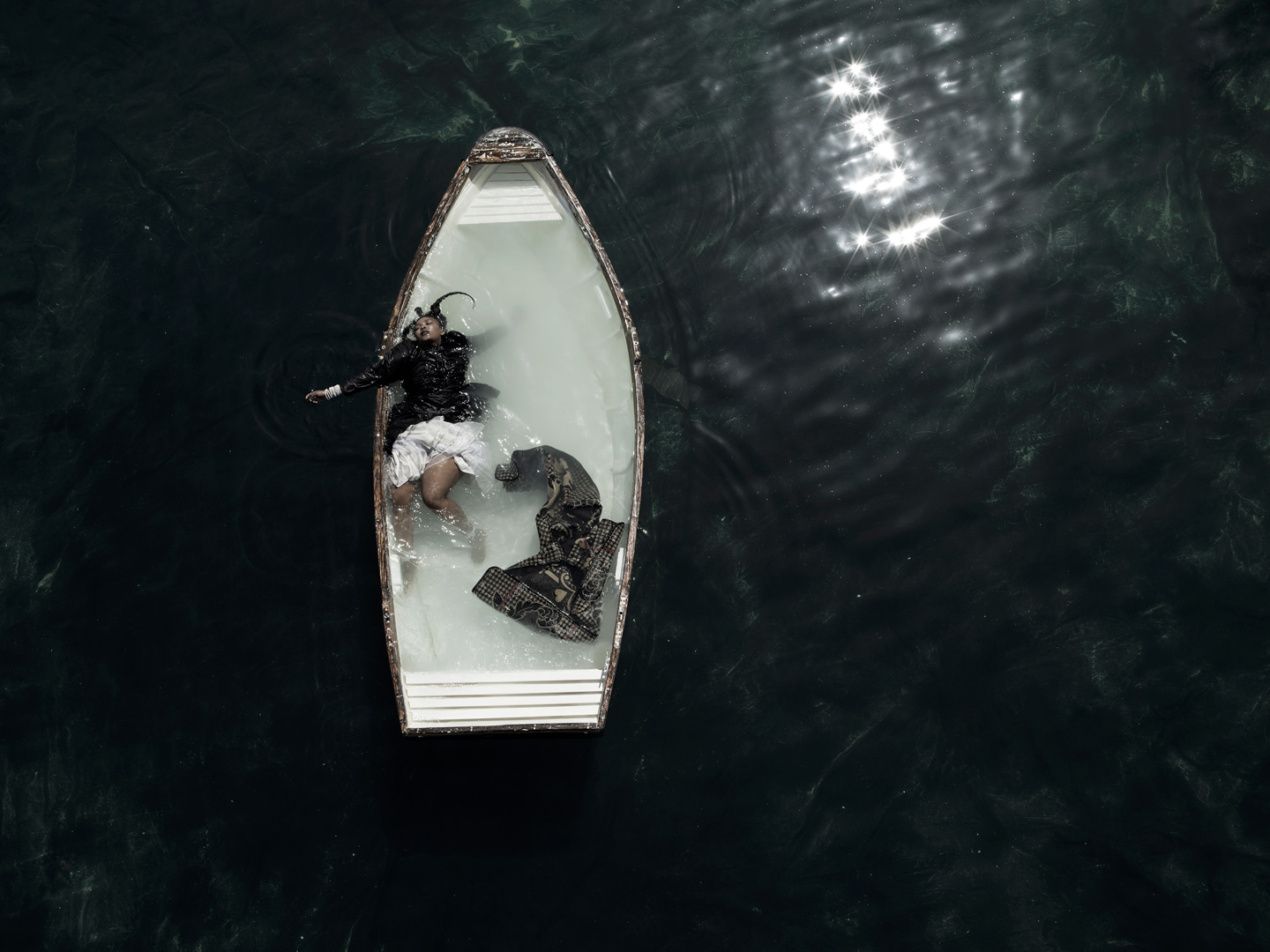 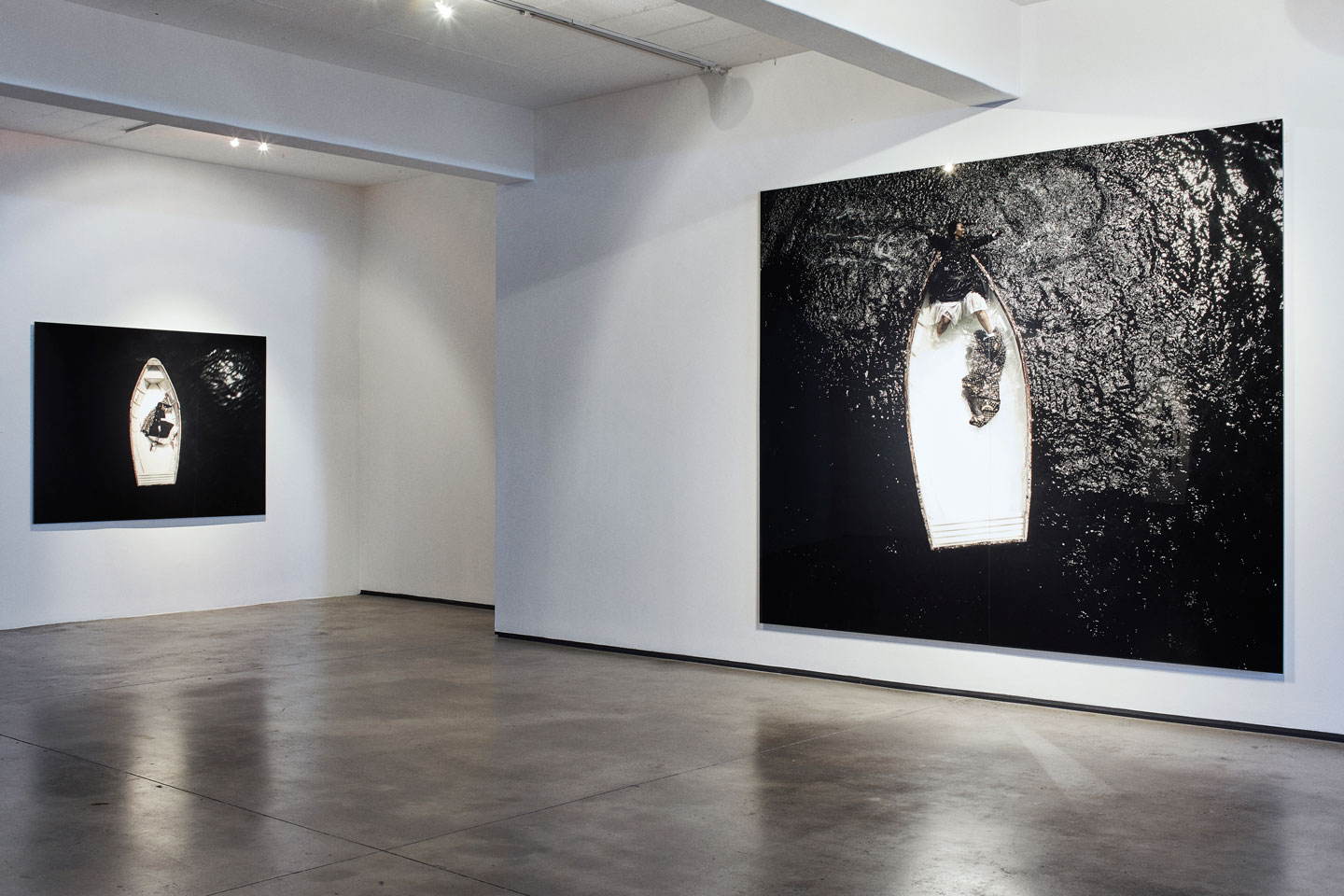 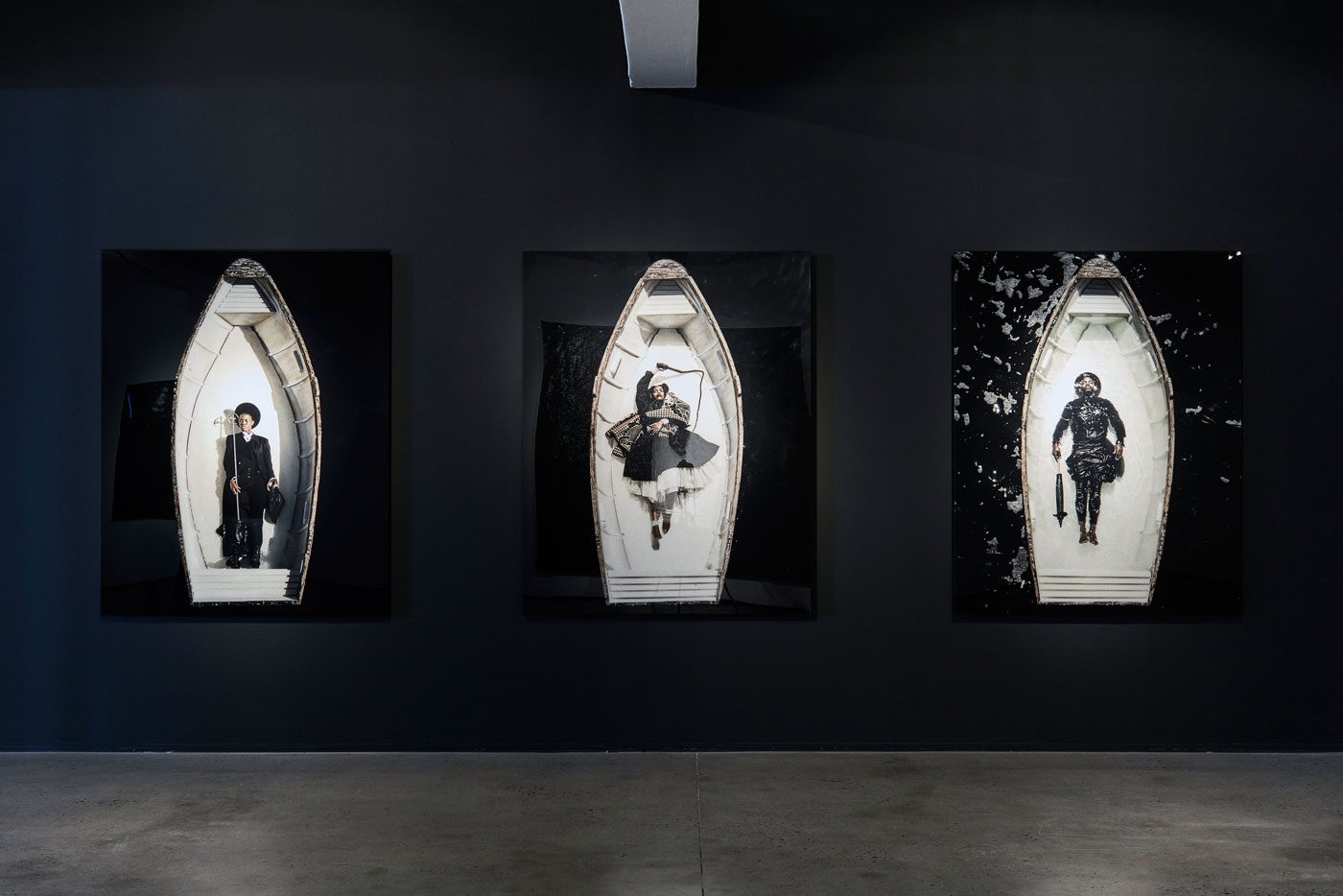 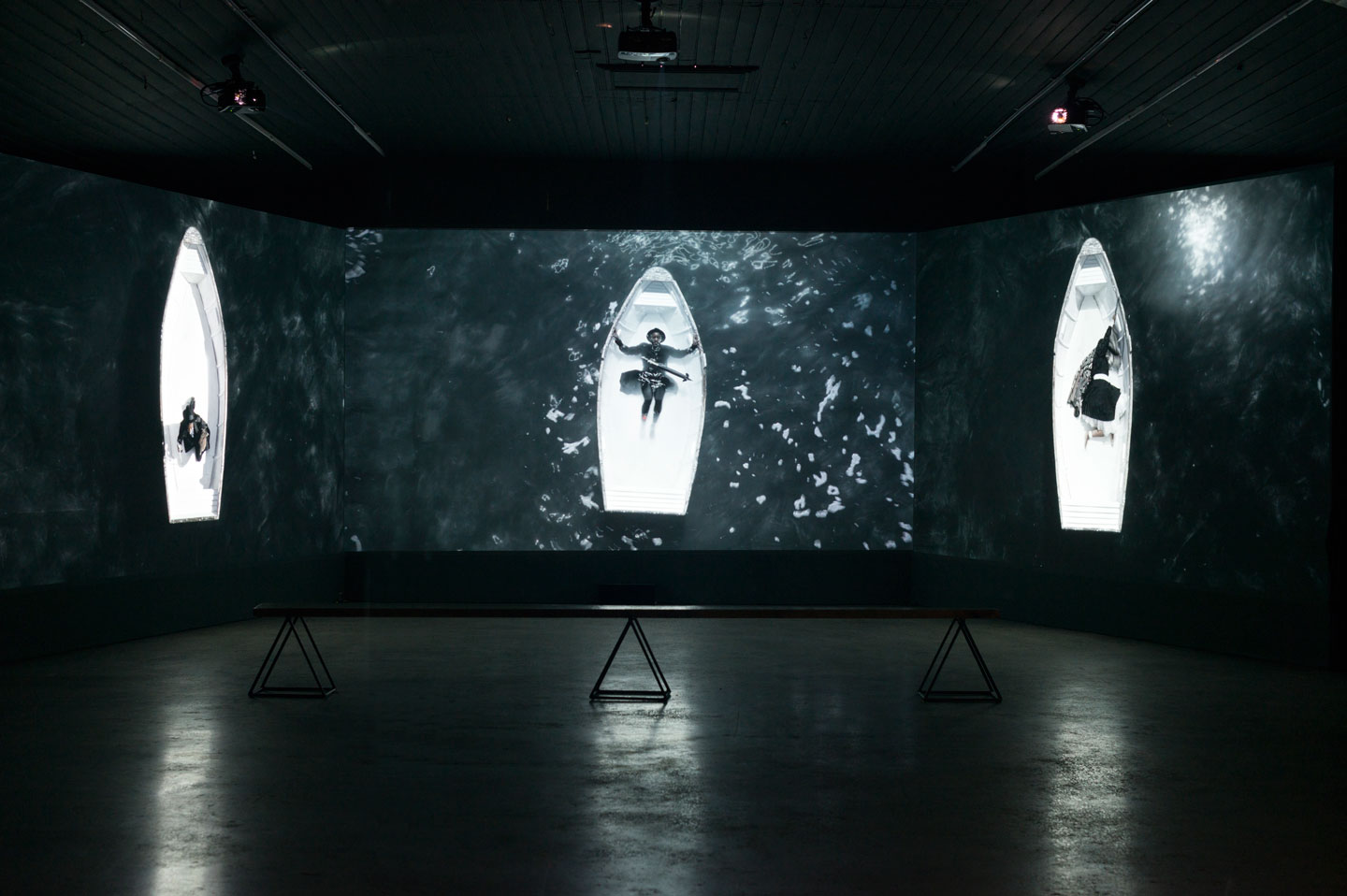 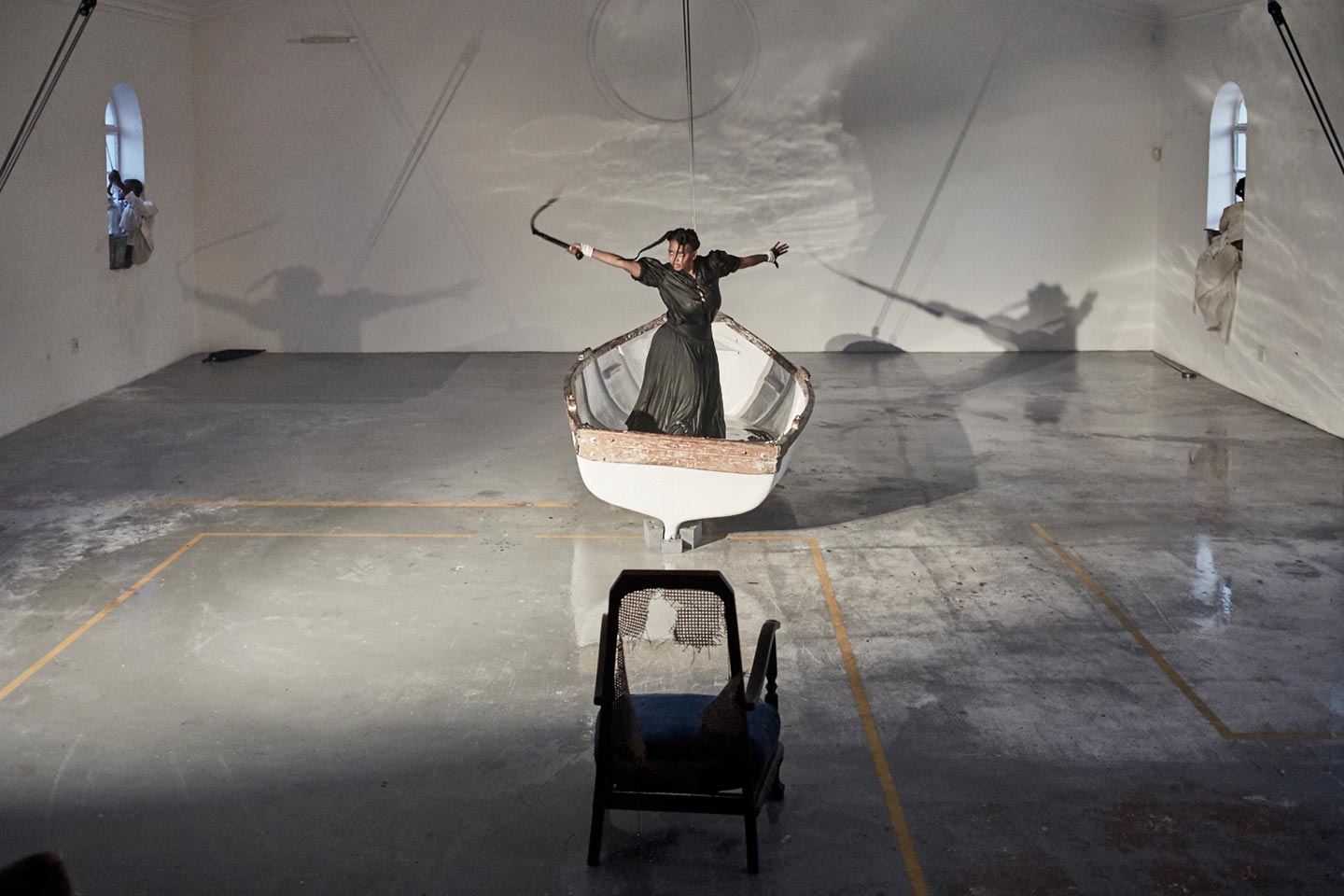 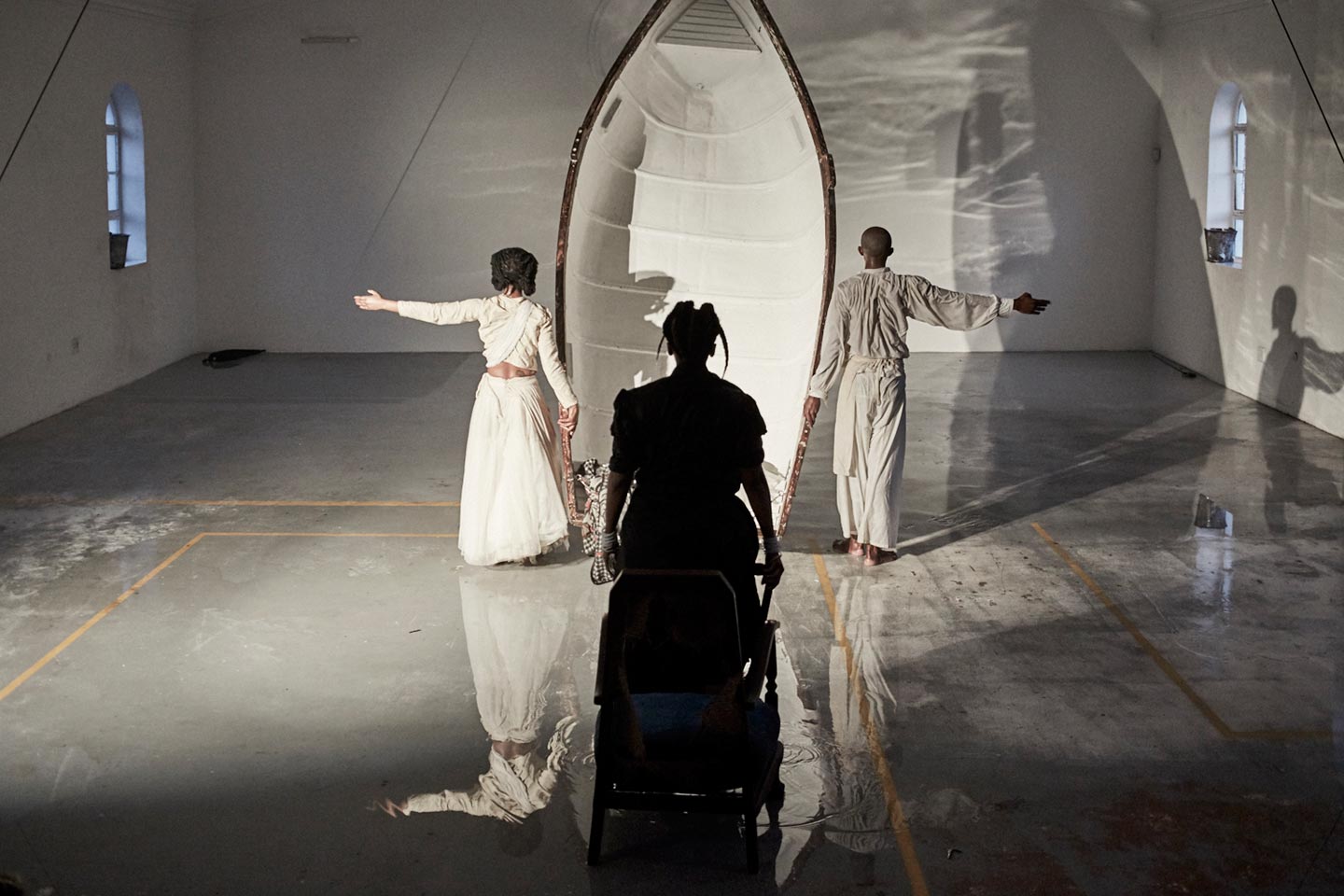 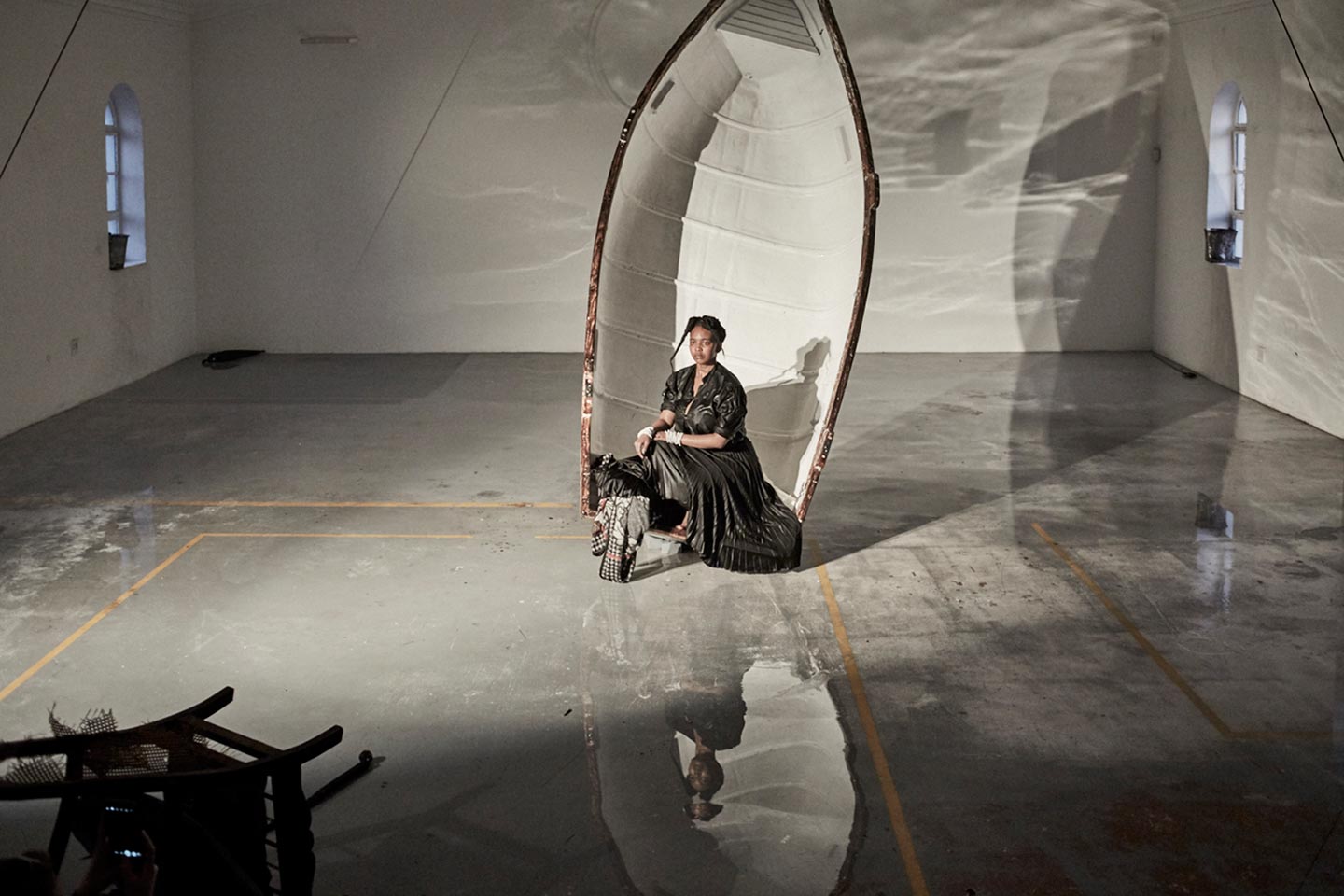 WHATIFTHEWORLD is pleased to present Passage – a new body of work by Mohau Modisakeng, consisting of performance, photography and film.

Passage (2017) by Mohau Modisakeng, is a three-channel video projection and photographic series that meditates on slavery’s dismemberment of African identity and its enduring erasure of personal histories.

In each of the artwork’s three projections, we are confronted with a character – a woman with a hawk perched on her arm, a young man in a Trilby hat and a woman wrapped in a Basotho blanket. The arched shape of the boat frames each passenger with their heads pointed towards the prow of the boat, they are each travelling with a single possession. As the passengers lie motionless on their backs looking up at the sky they begin to perform a series of actions that move between gestures of struggle and resignation. A pool of water gradually forms beneath their bodies. The rising water gradually floods the well of the boat eventually leaving the passengers submerged while the boat is slowly sinking and eventually disappearing.

In Passage, the ebb and flow of water, as both life giving and deadly, symbolizes the many who have arrived or departed from South Africa in trade, as cargo or as transient bodies belonging to no particular state. In South Africa, systems of indentured labour and slavery were instituted by the Cape Colony in 1652 to meet the growing demand for labour. Dutch settlers imported people from the Indian subcontinent, Indonesia, Madagascar, East Africa and Angola, putting them to work on plantations and at ports. South Africa became a jostling ground between the Dutch and British, its native people rendered as mere commodities moving through the establishment of an industrialized mining economy, as labourers and as soldiers in the Anglo Boer and world wars.

Passage (2017) was commissioned by the South African Department of Arts and Culture on the occasion of the 57th International Art Exhibition – la Biennale di Venezia.