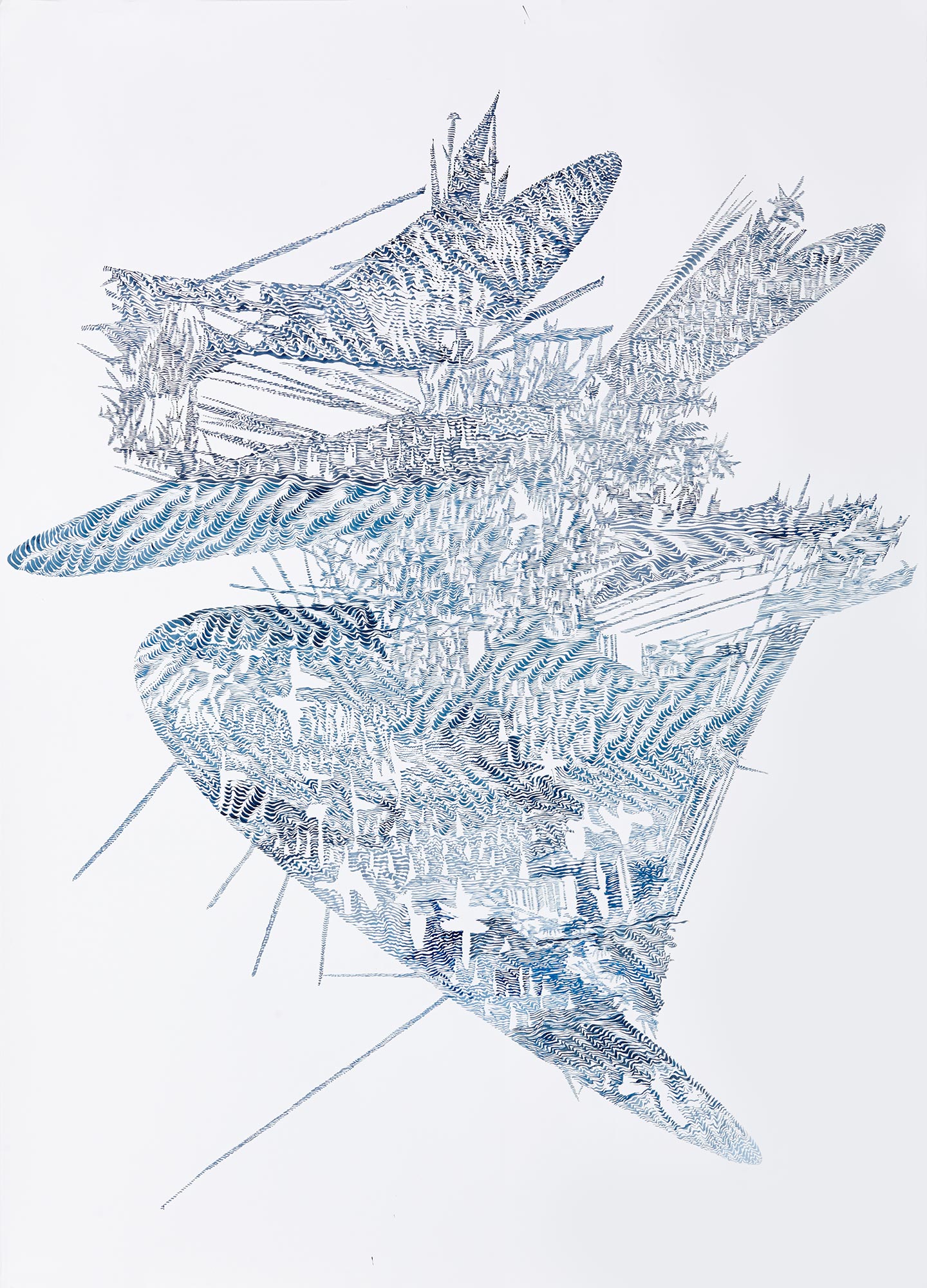 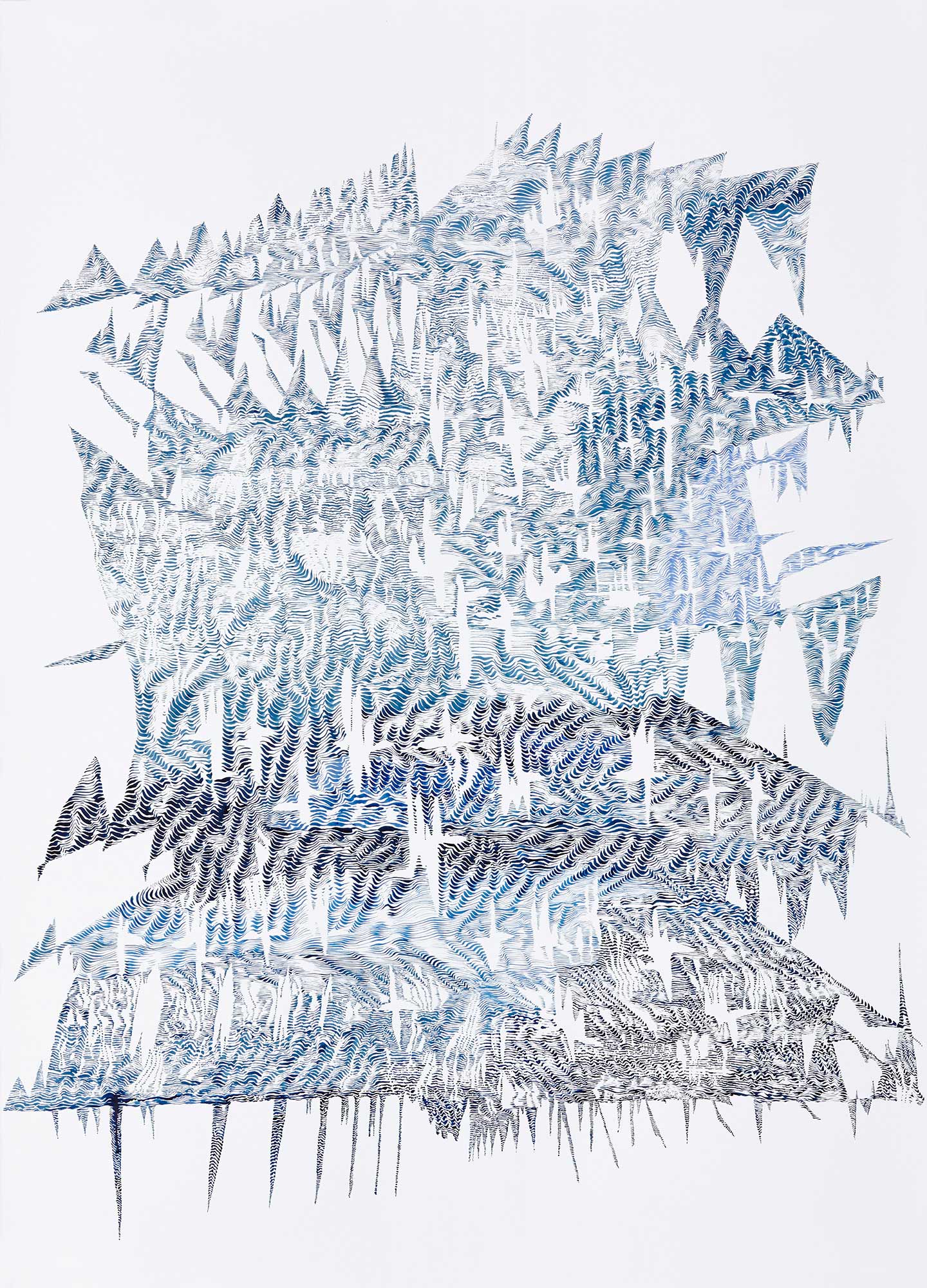 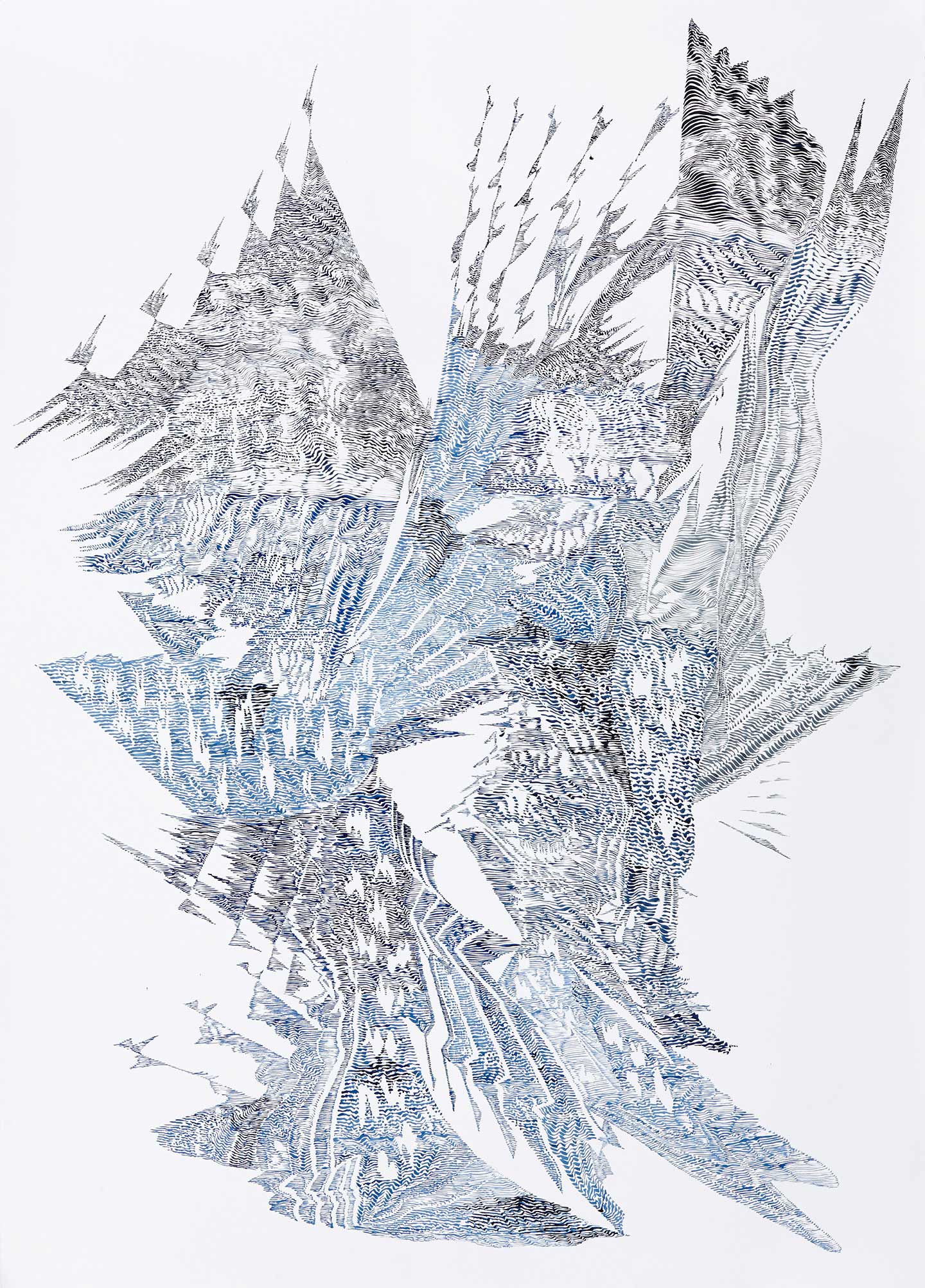 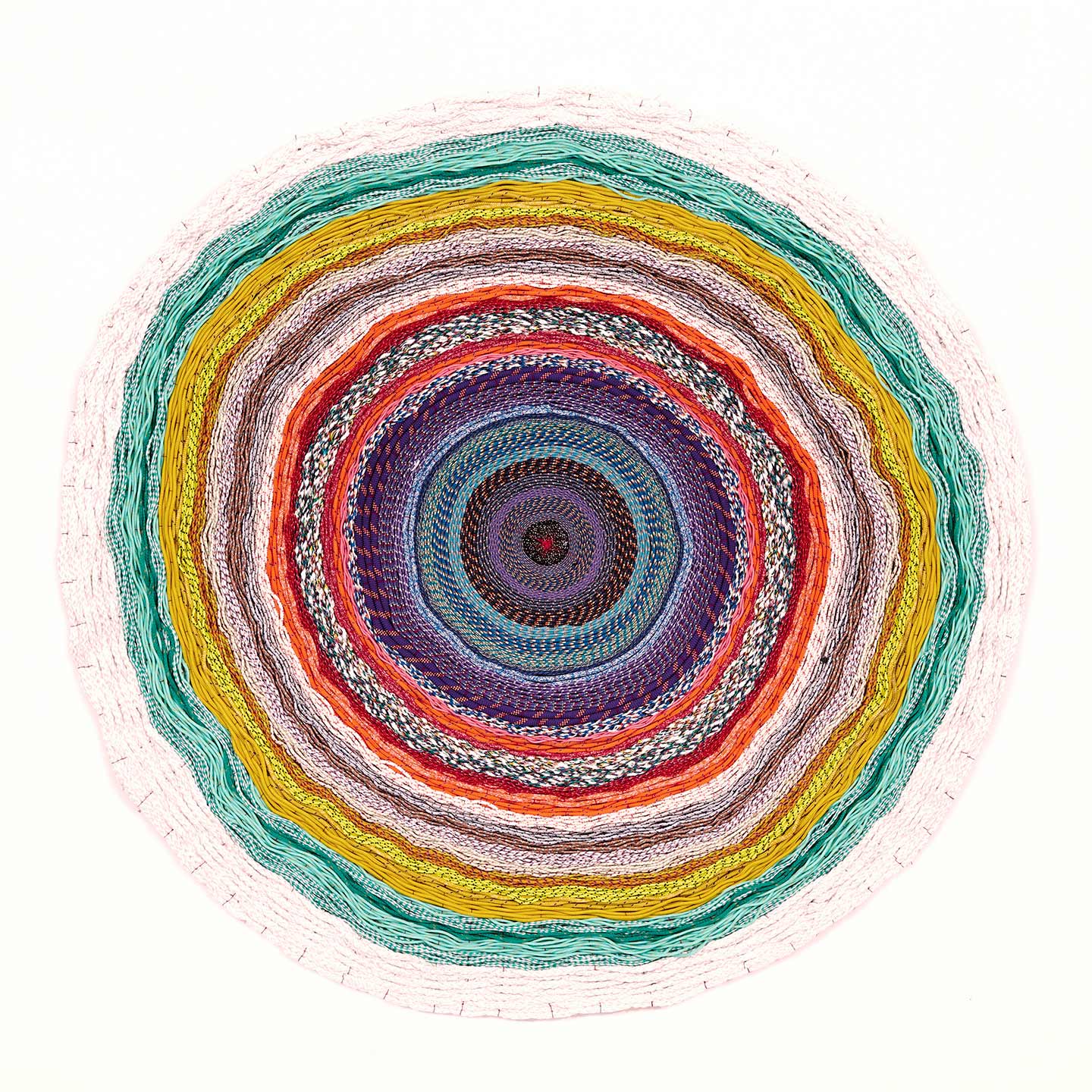 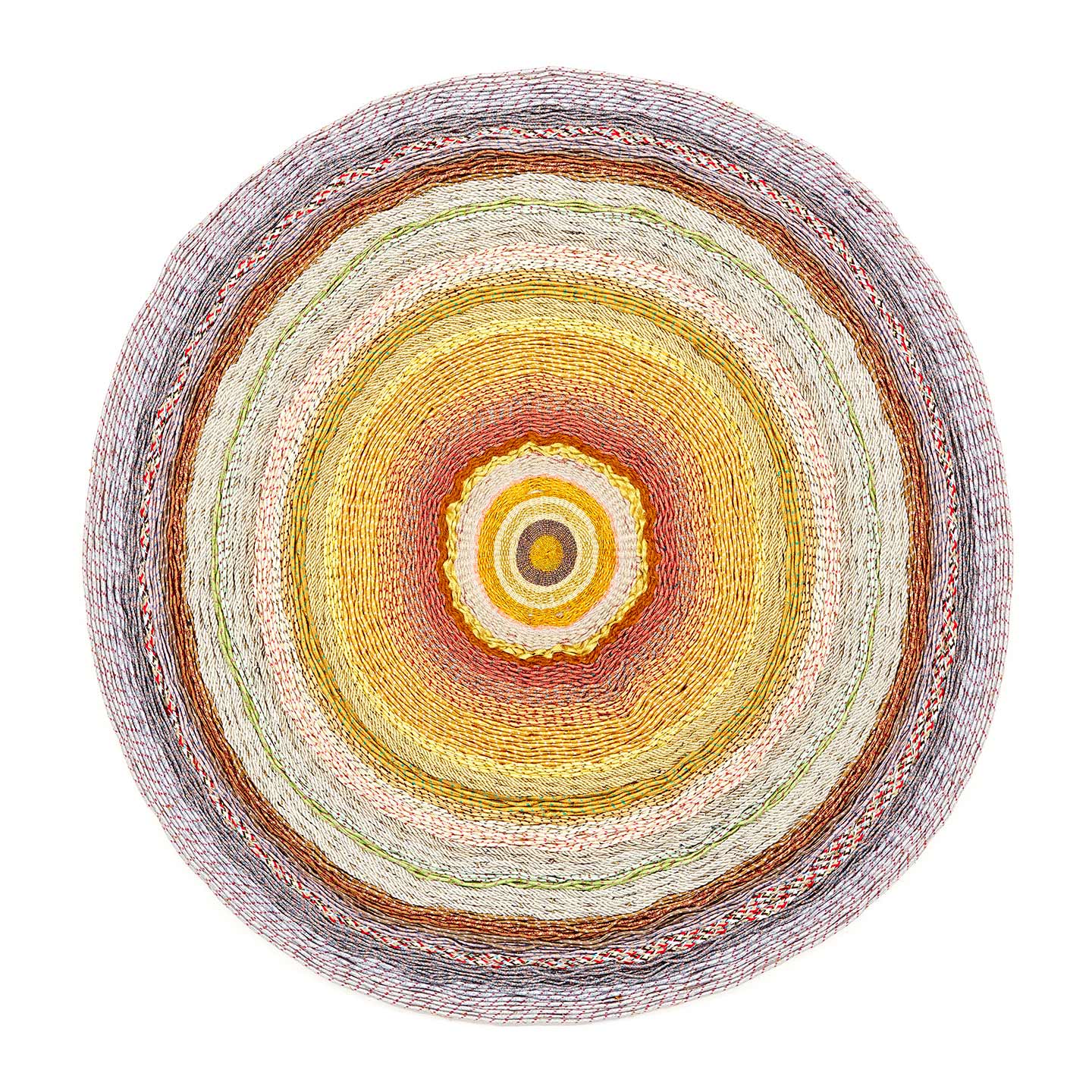 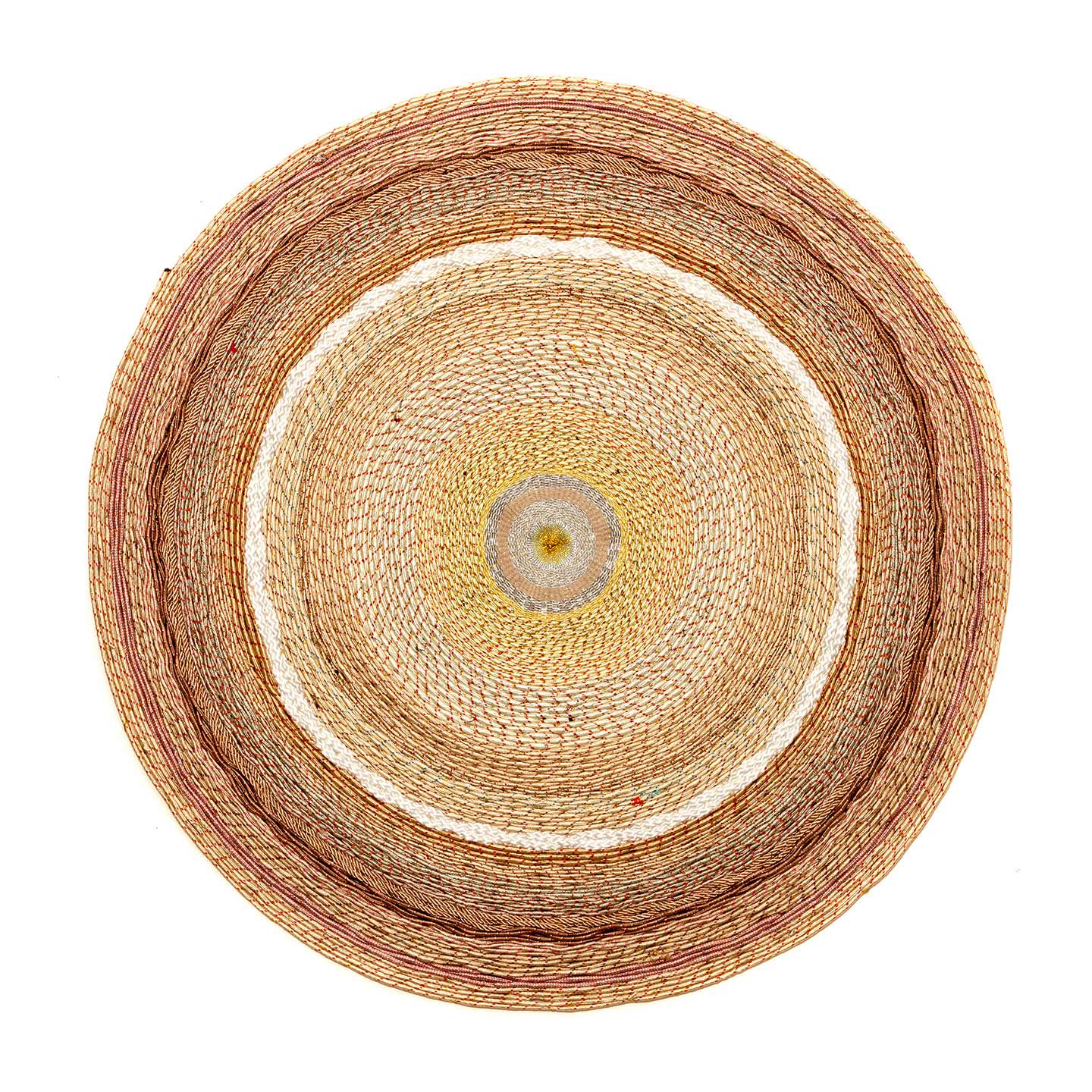 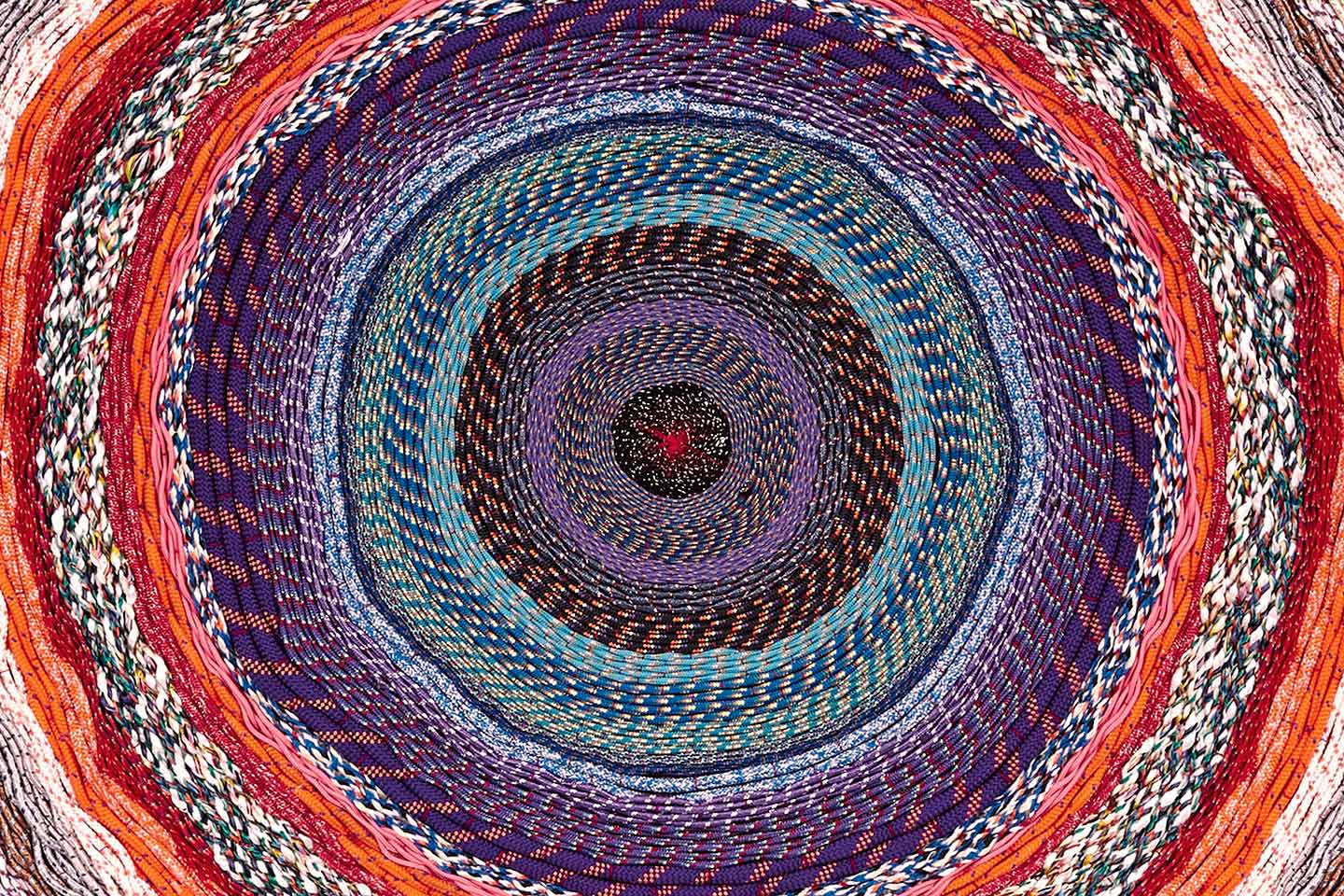 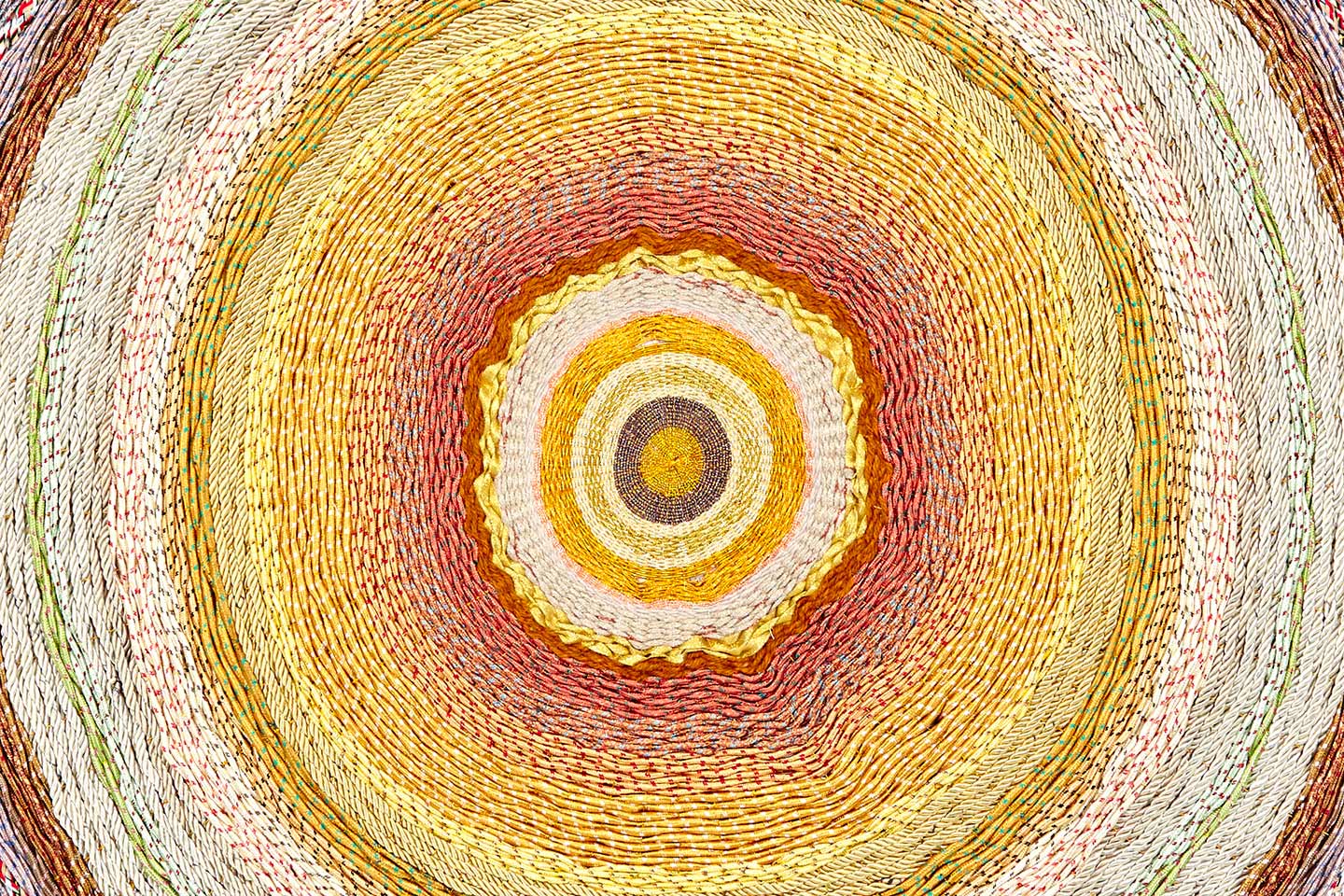 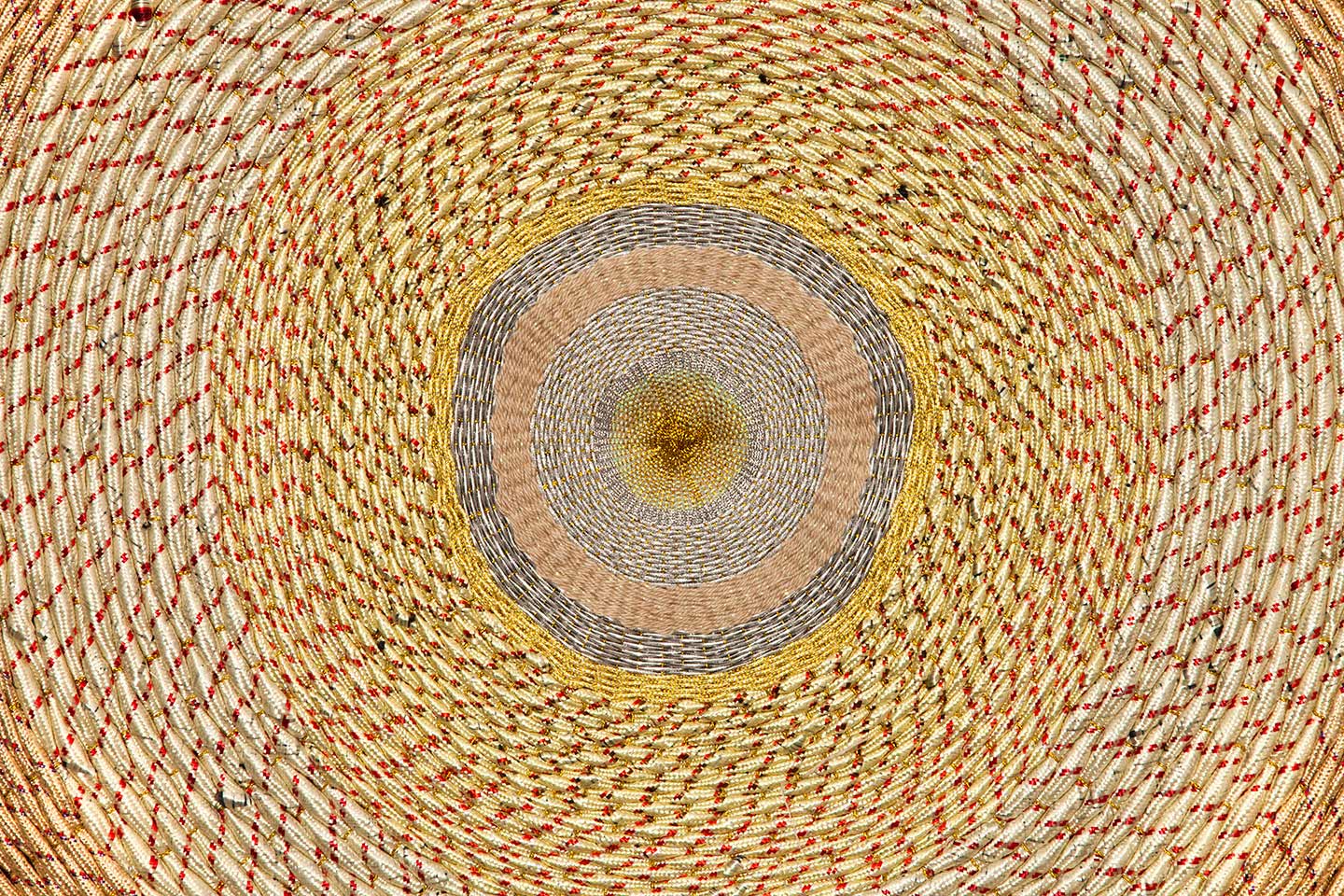 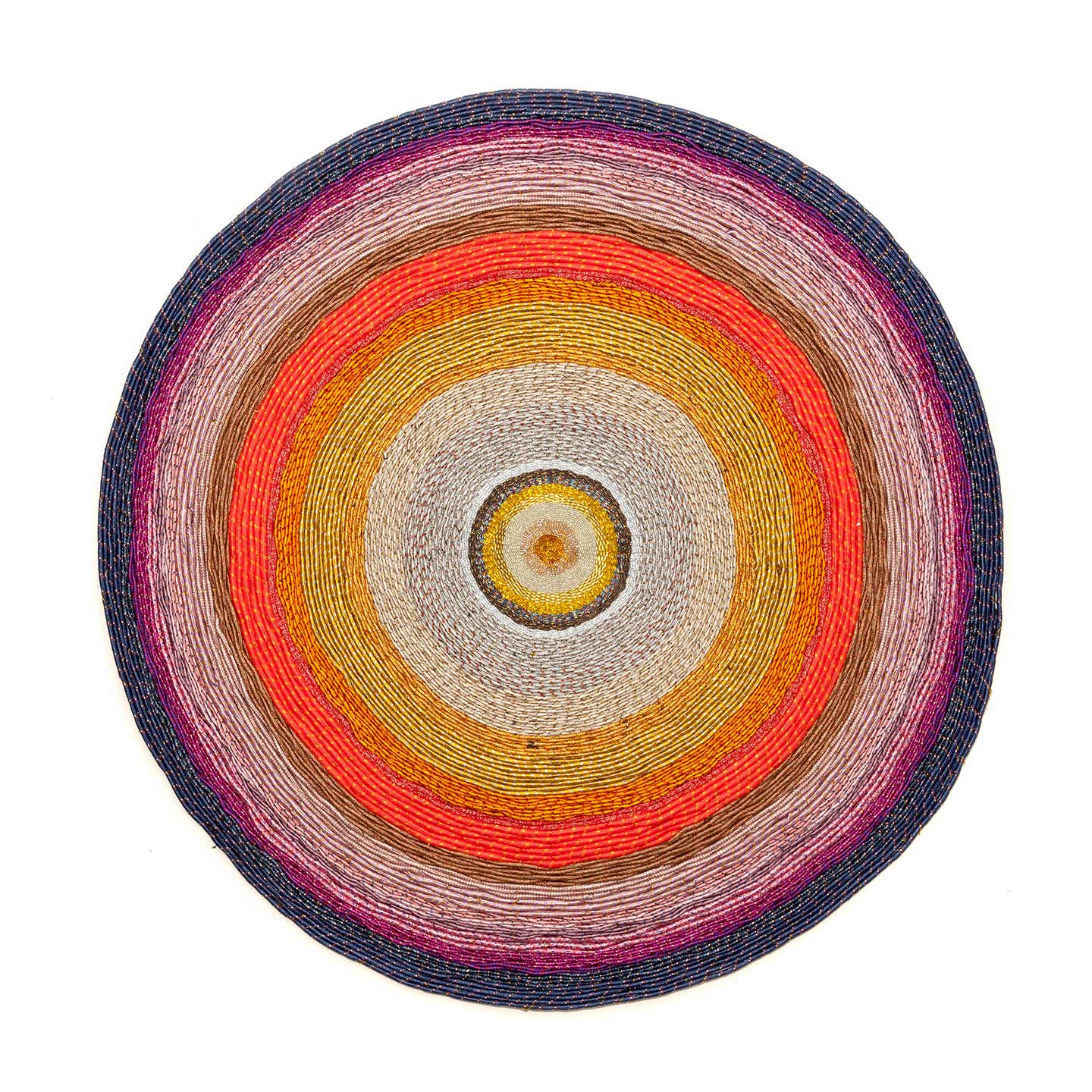 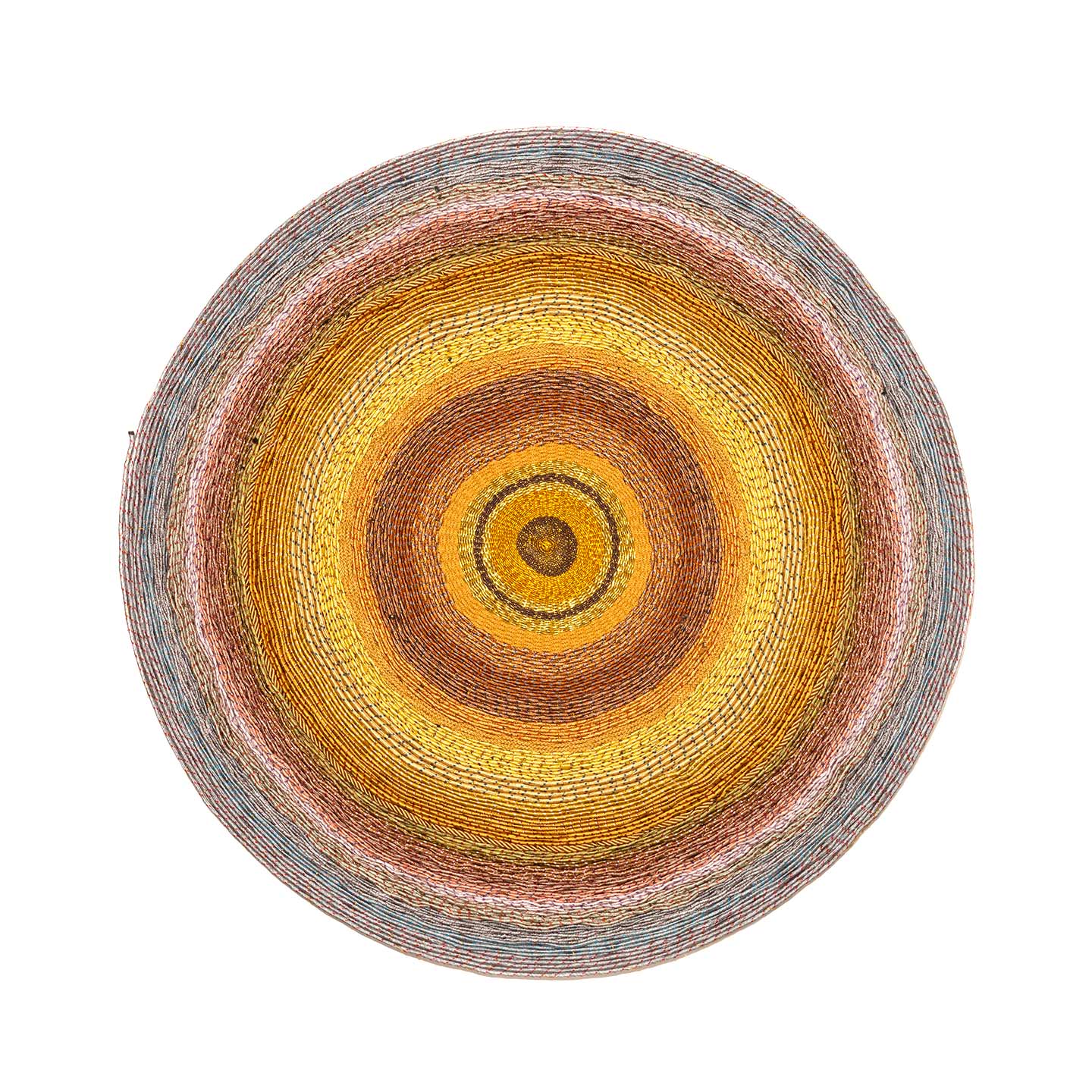 Empyrean: Castle in the air 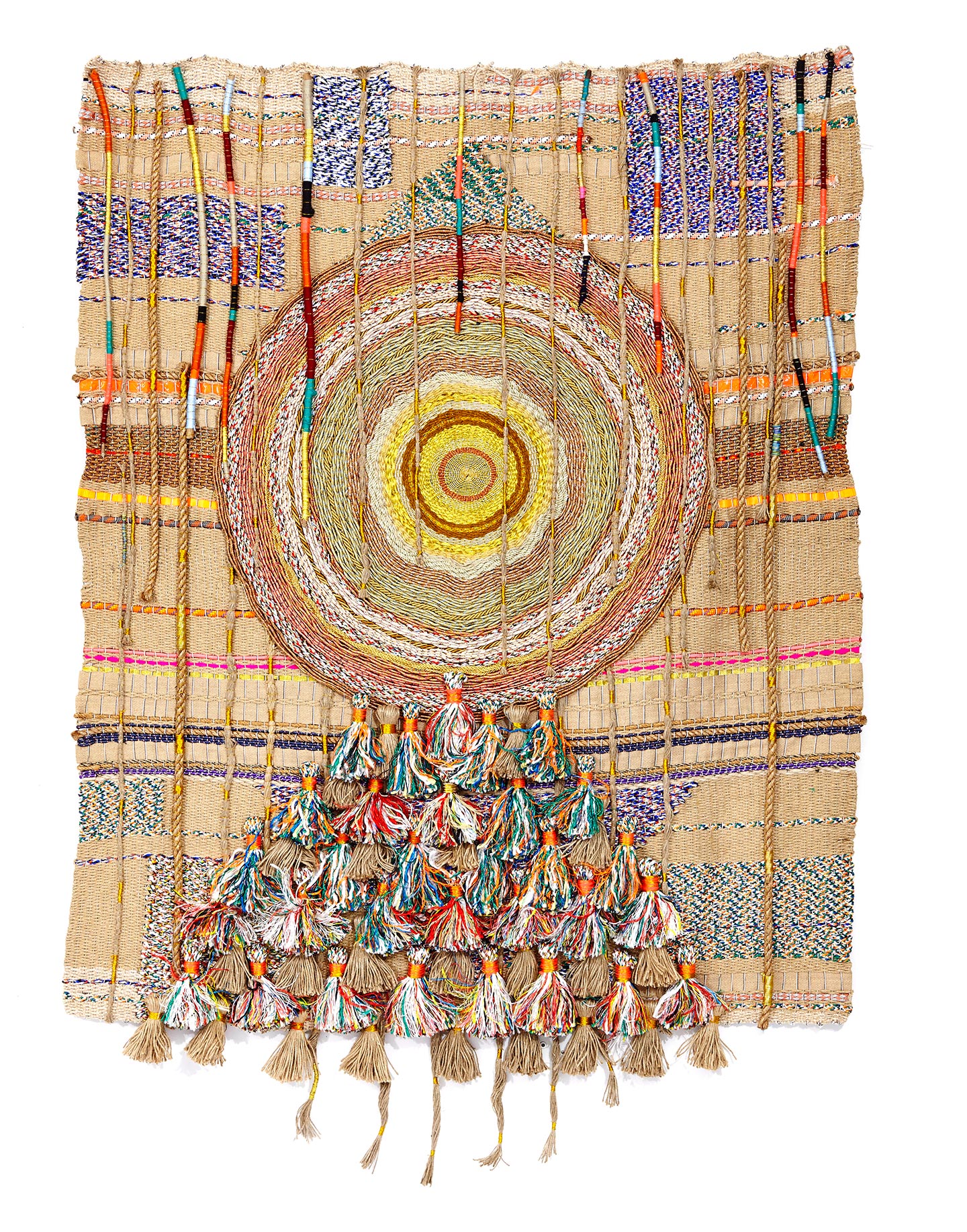 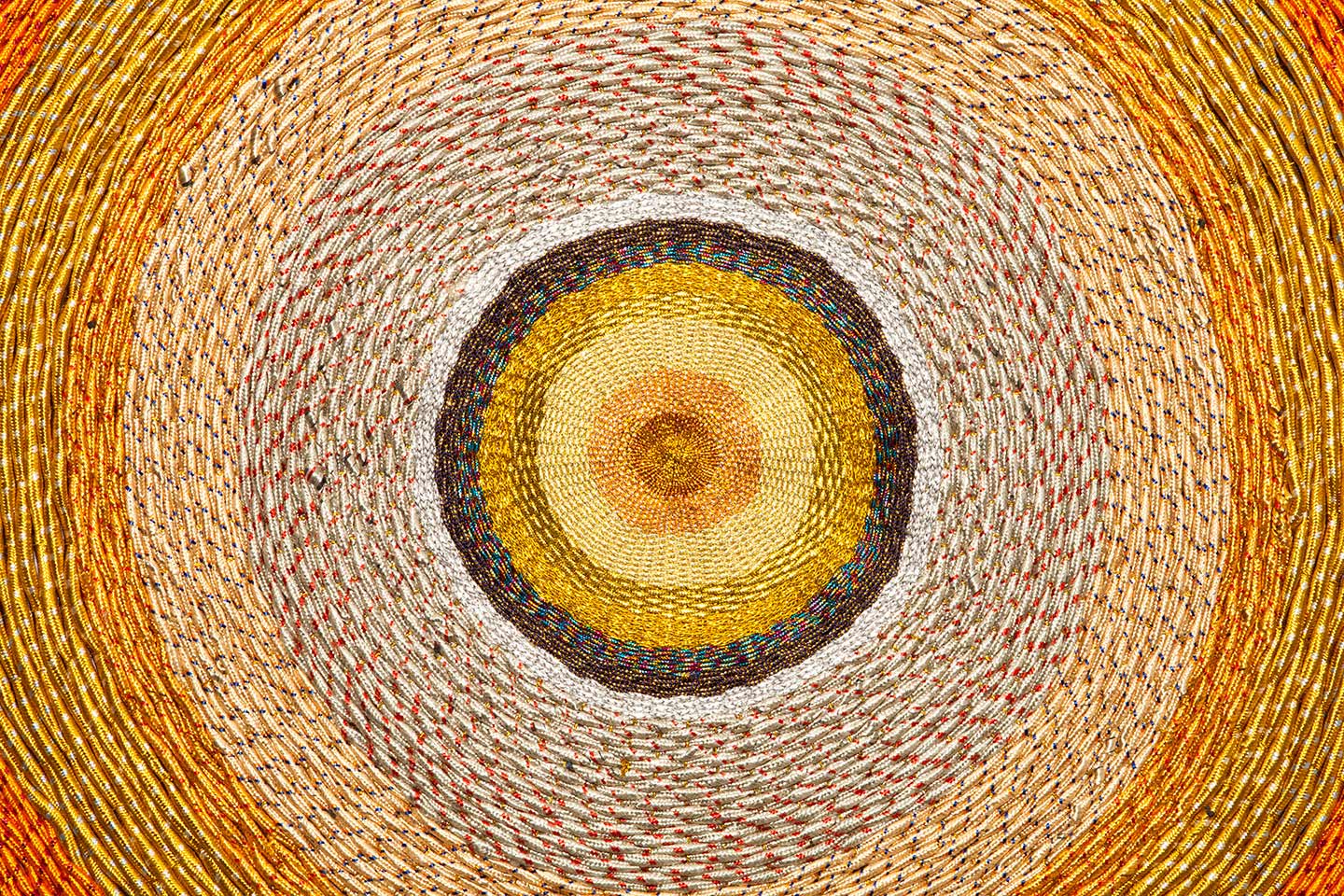 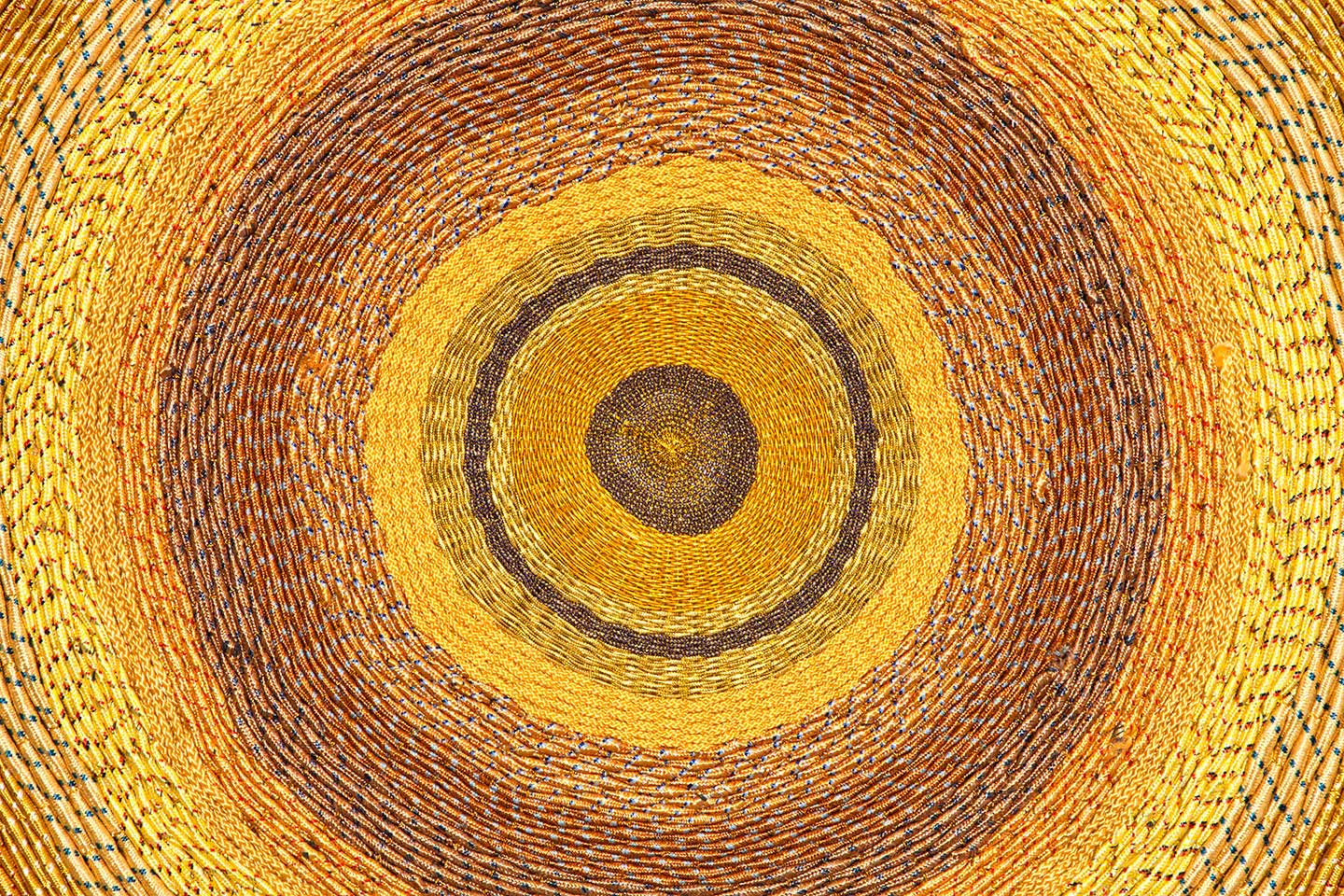 Spectrum Weave: Homesick for a Place that Doesn't Exist 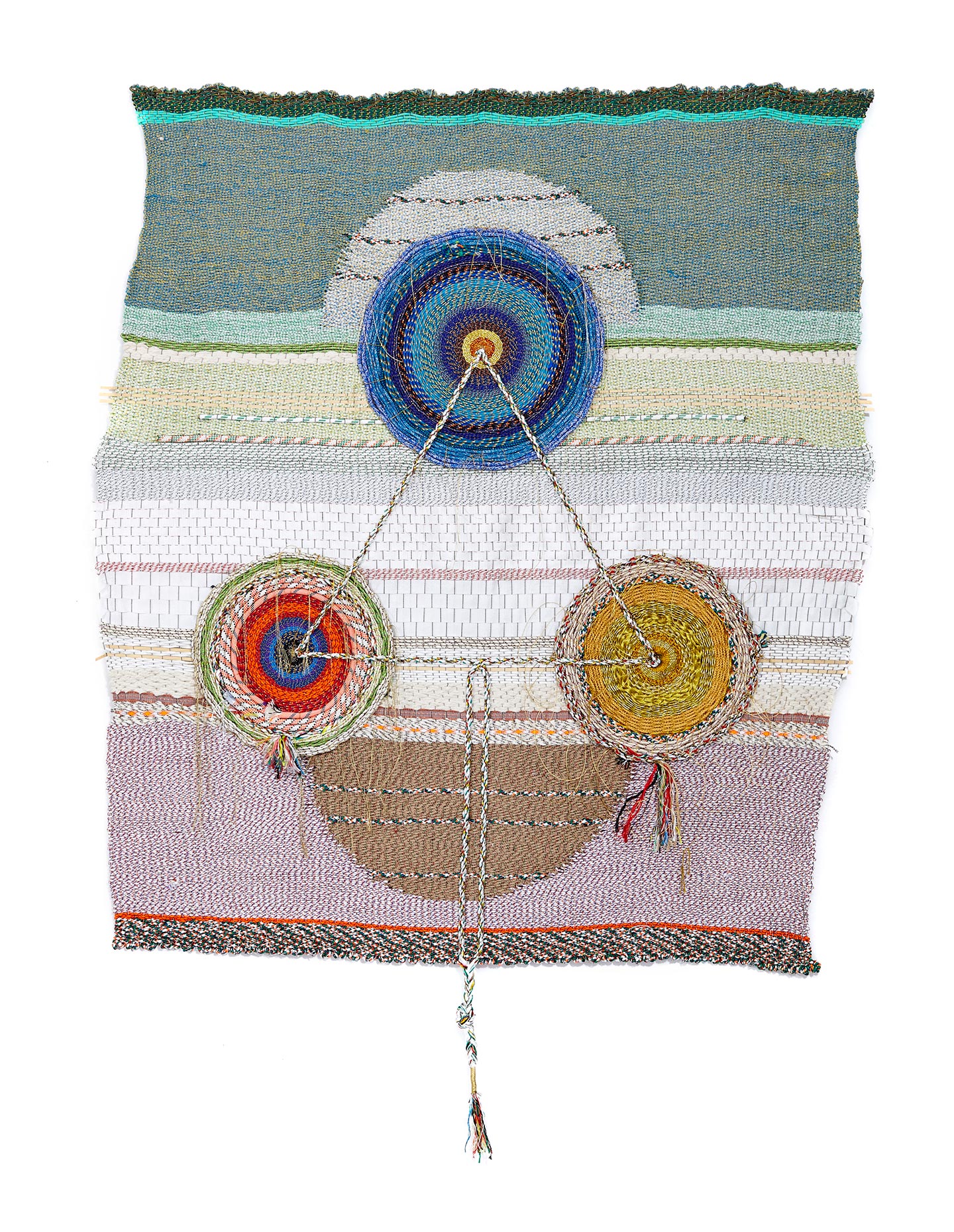 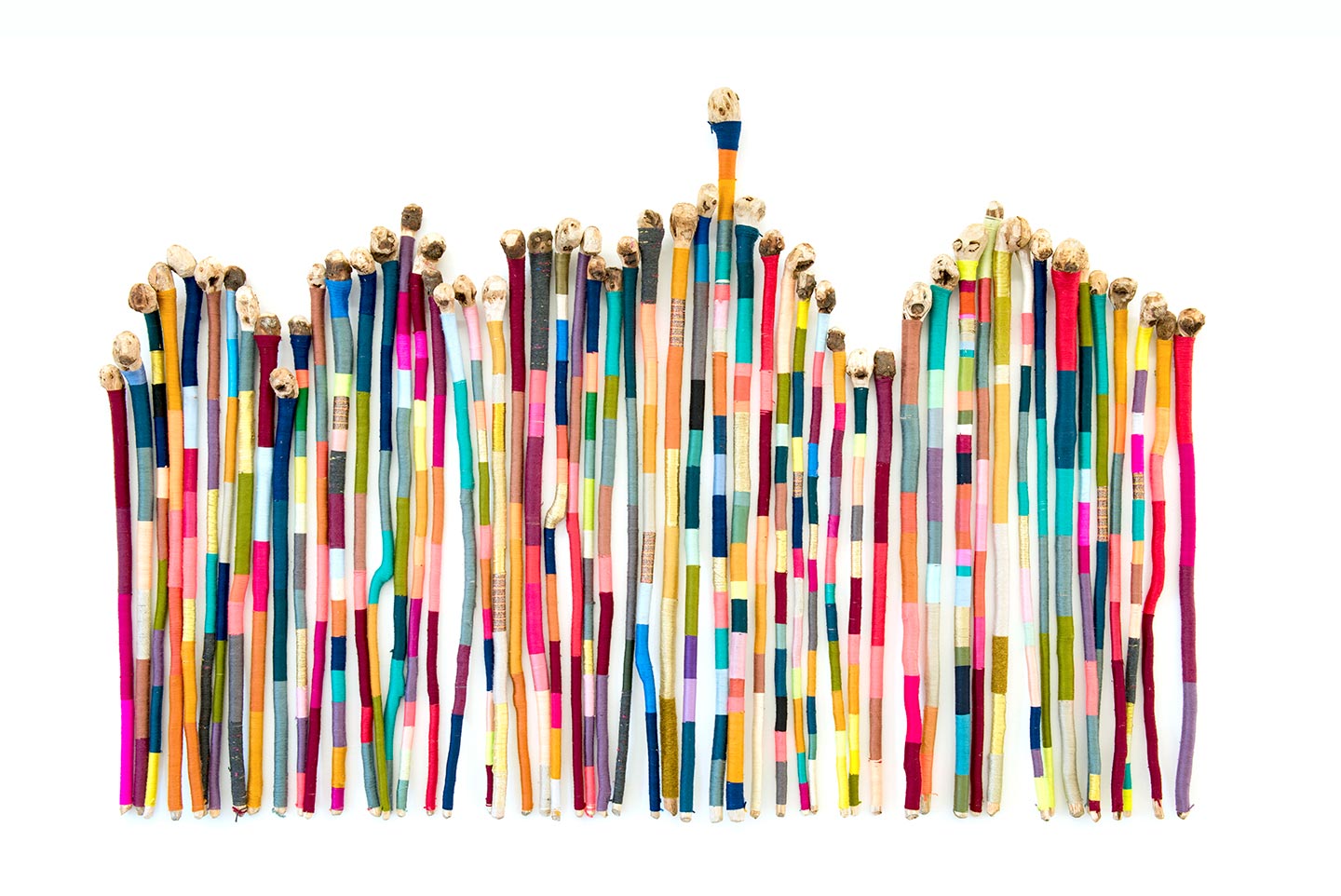 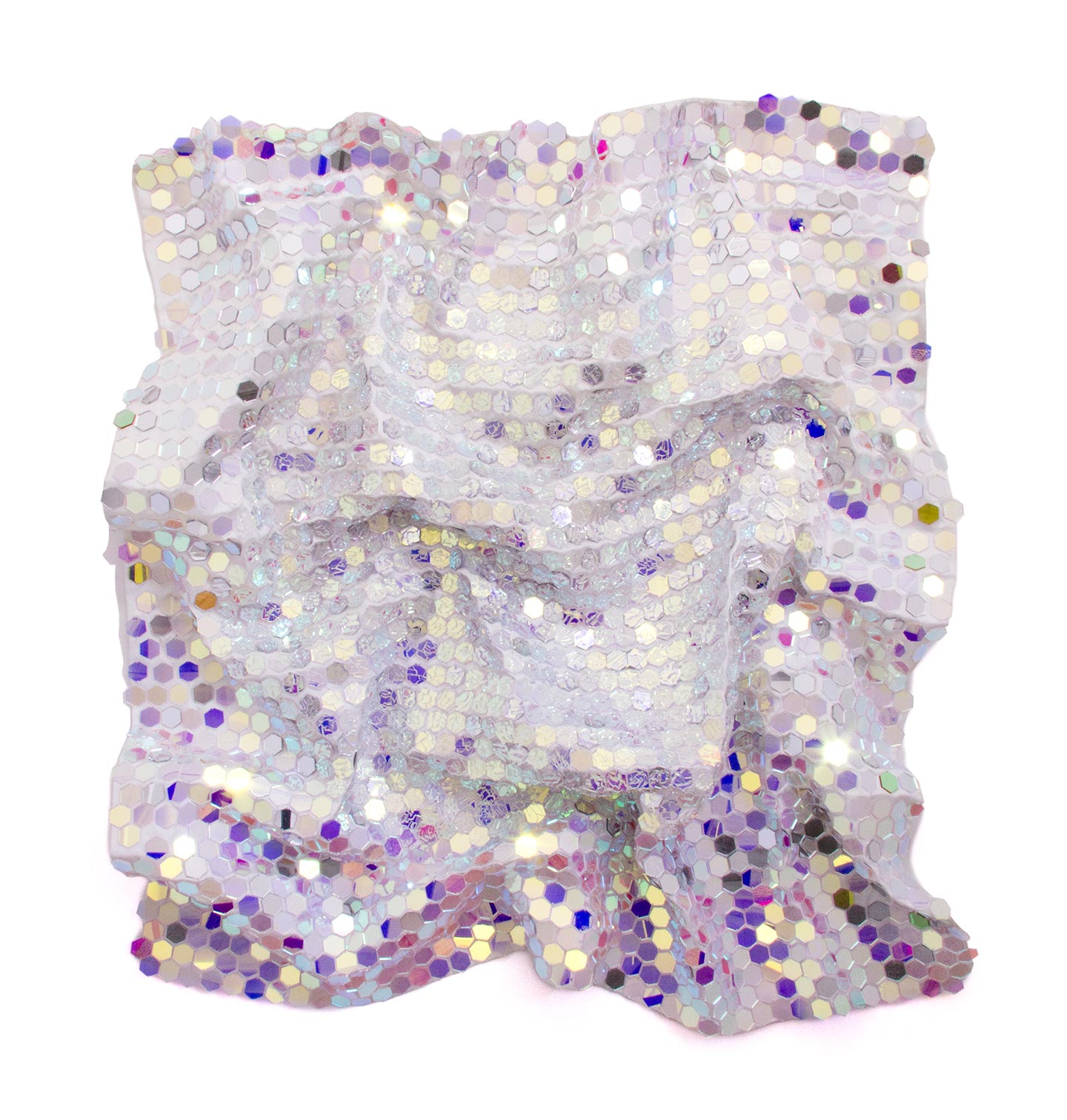 Sickeningly Sweet: Rainbow Butterfly by the Crash Site at Night in the Future Utopia 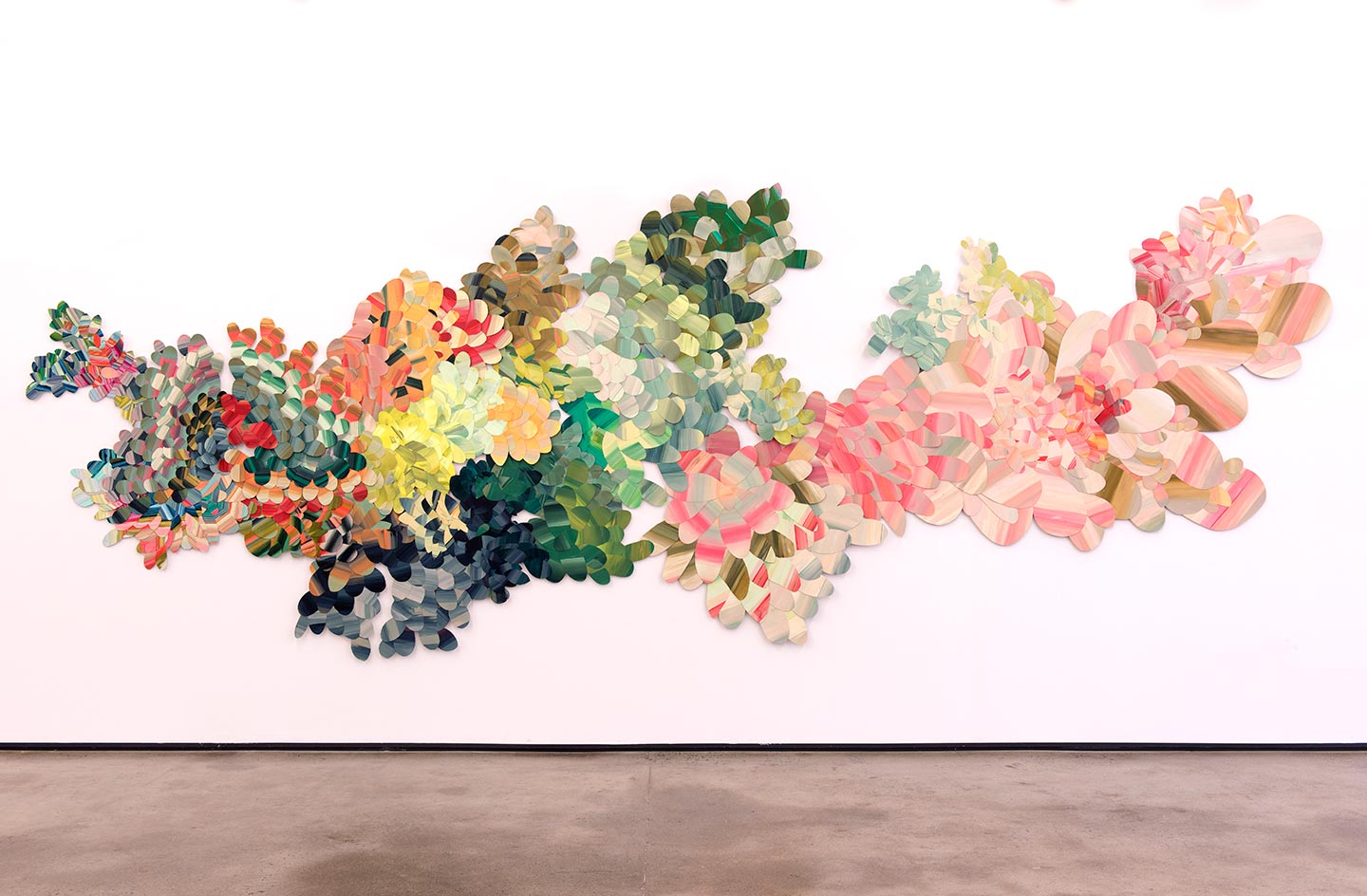 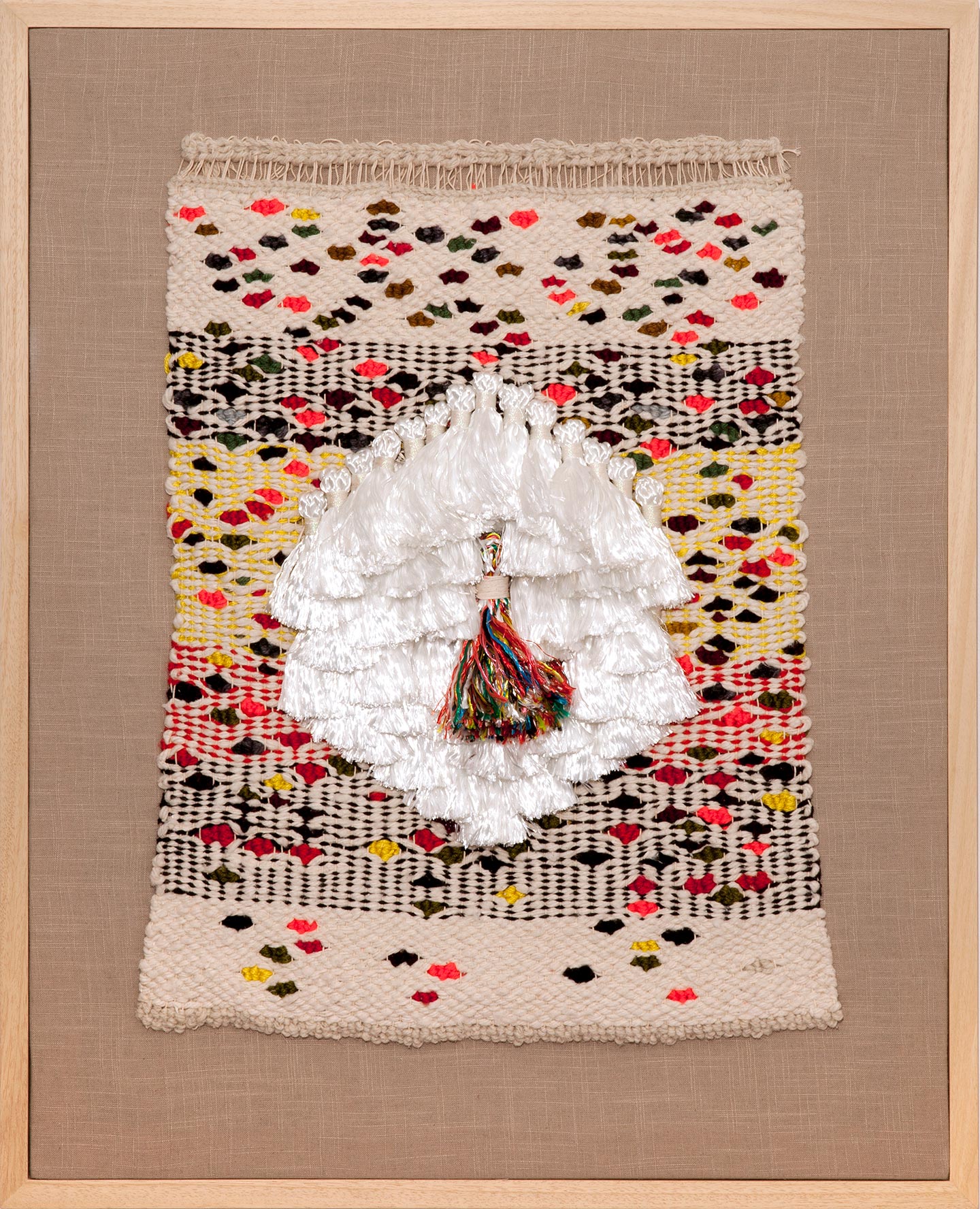 Winding Course: I Found a Rainbow Butterfly Once 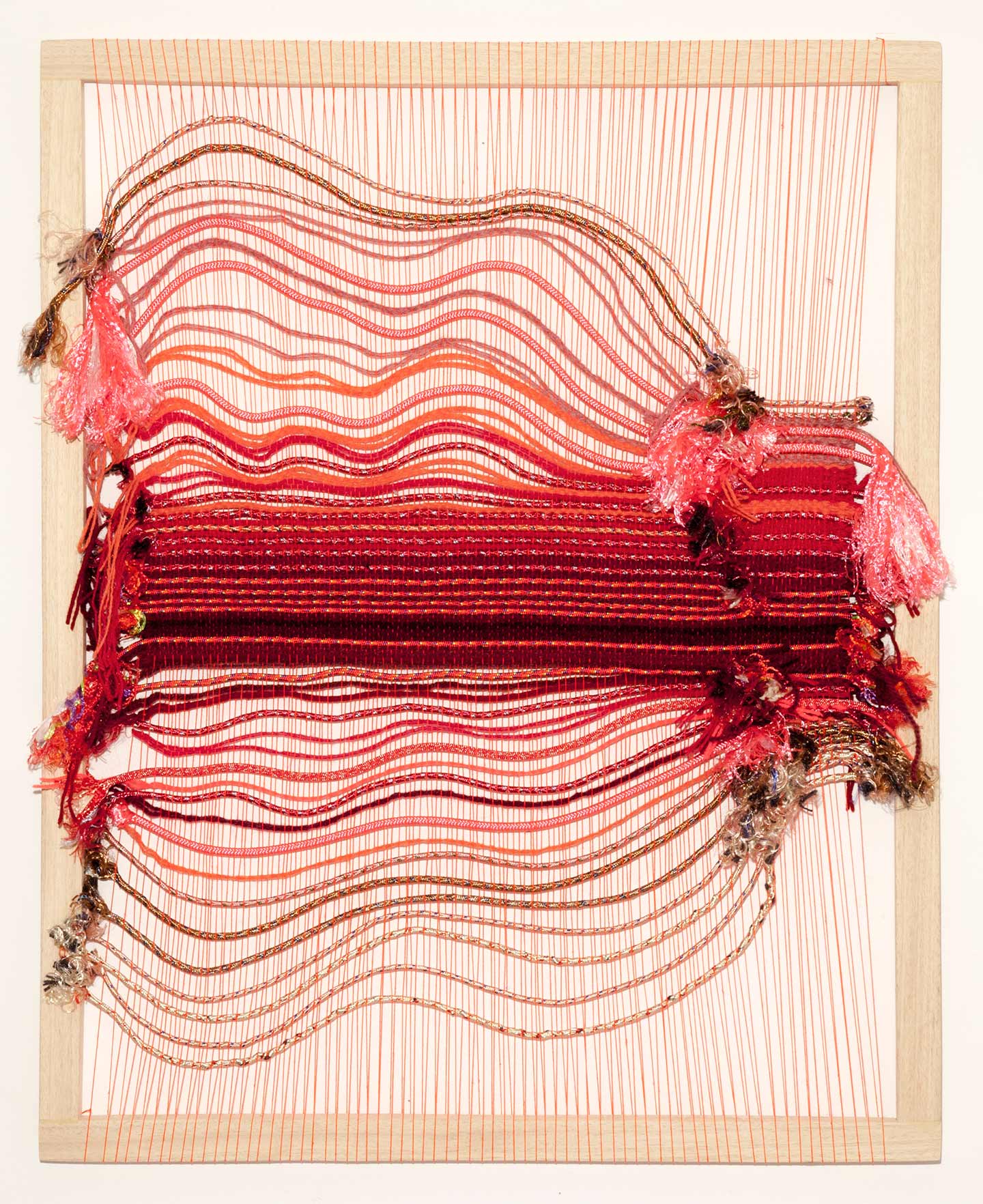 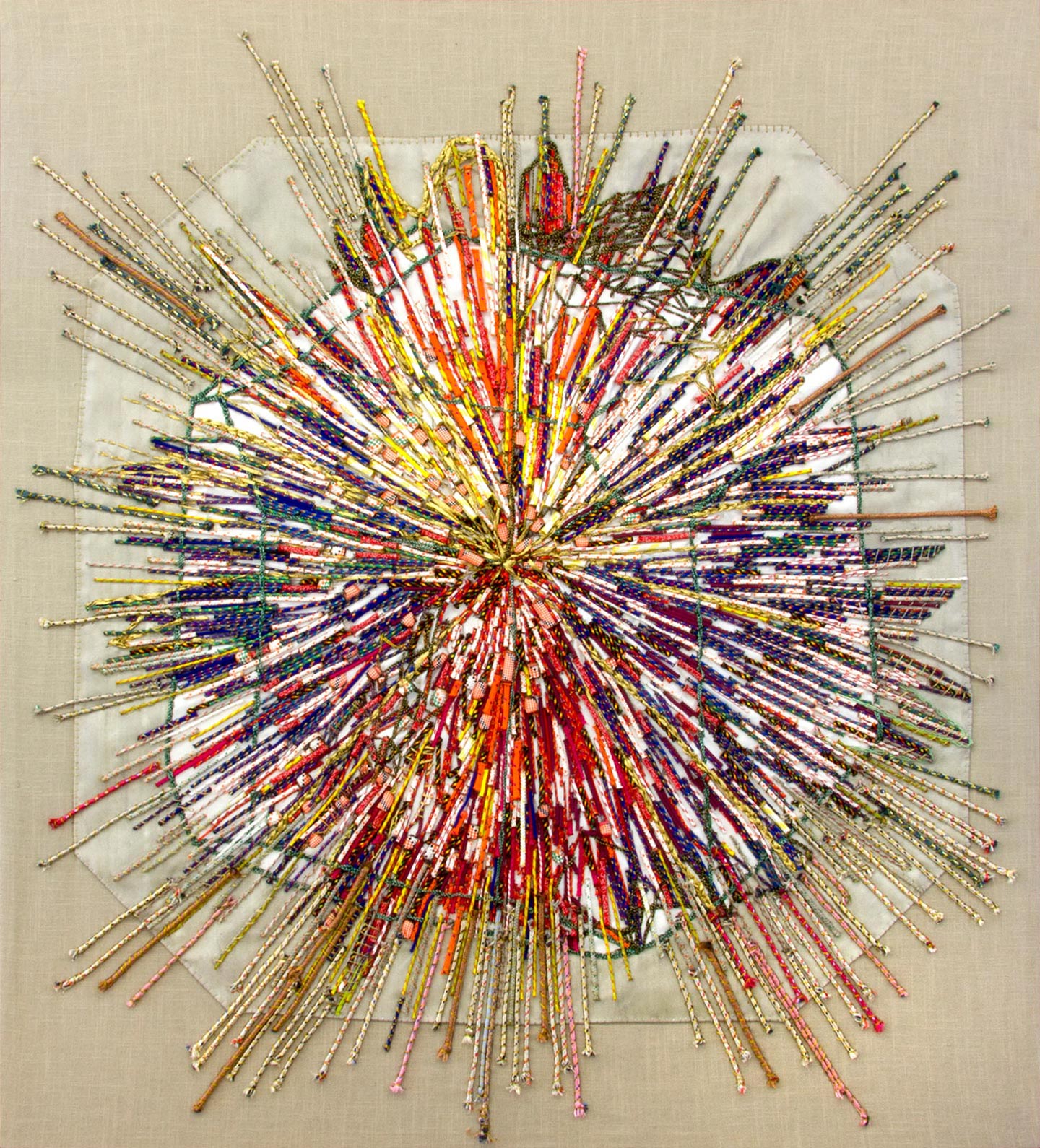 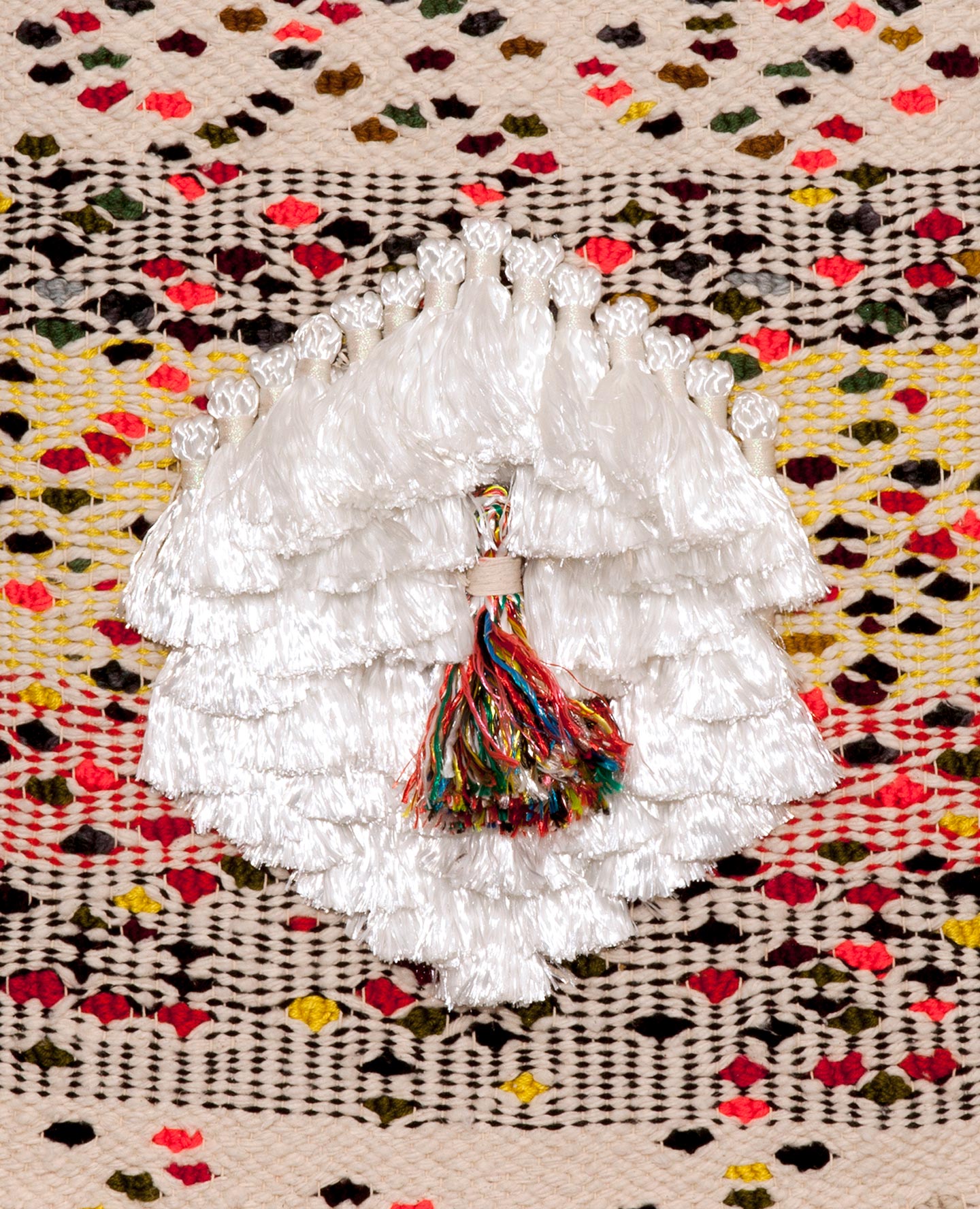 Winding Course: I Found a Rainbow Butterfly Once (Detail) 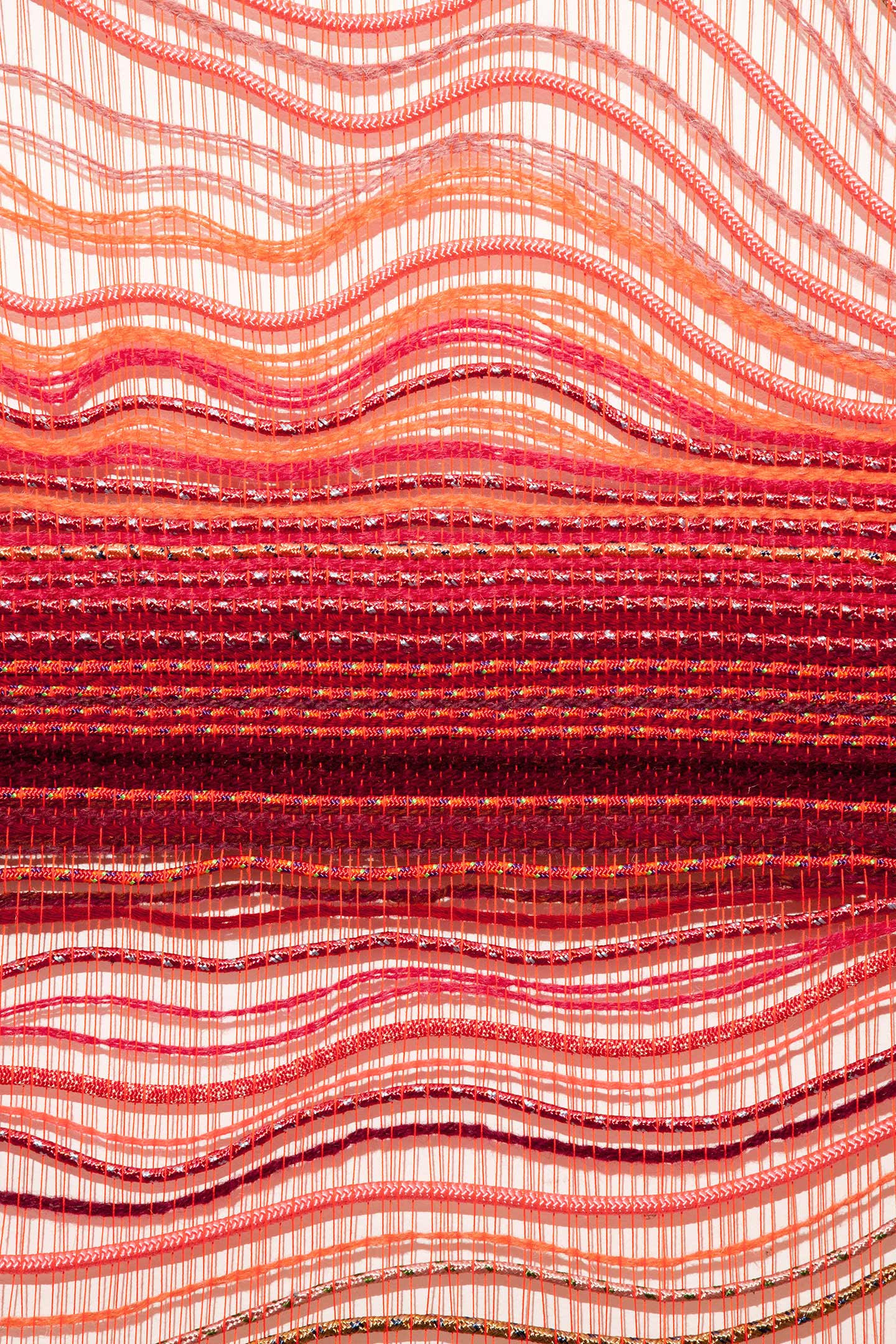 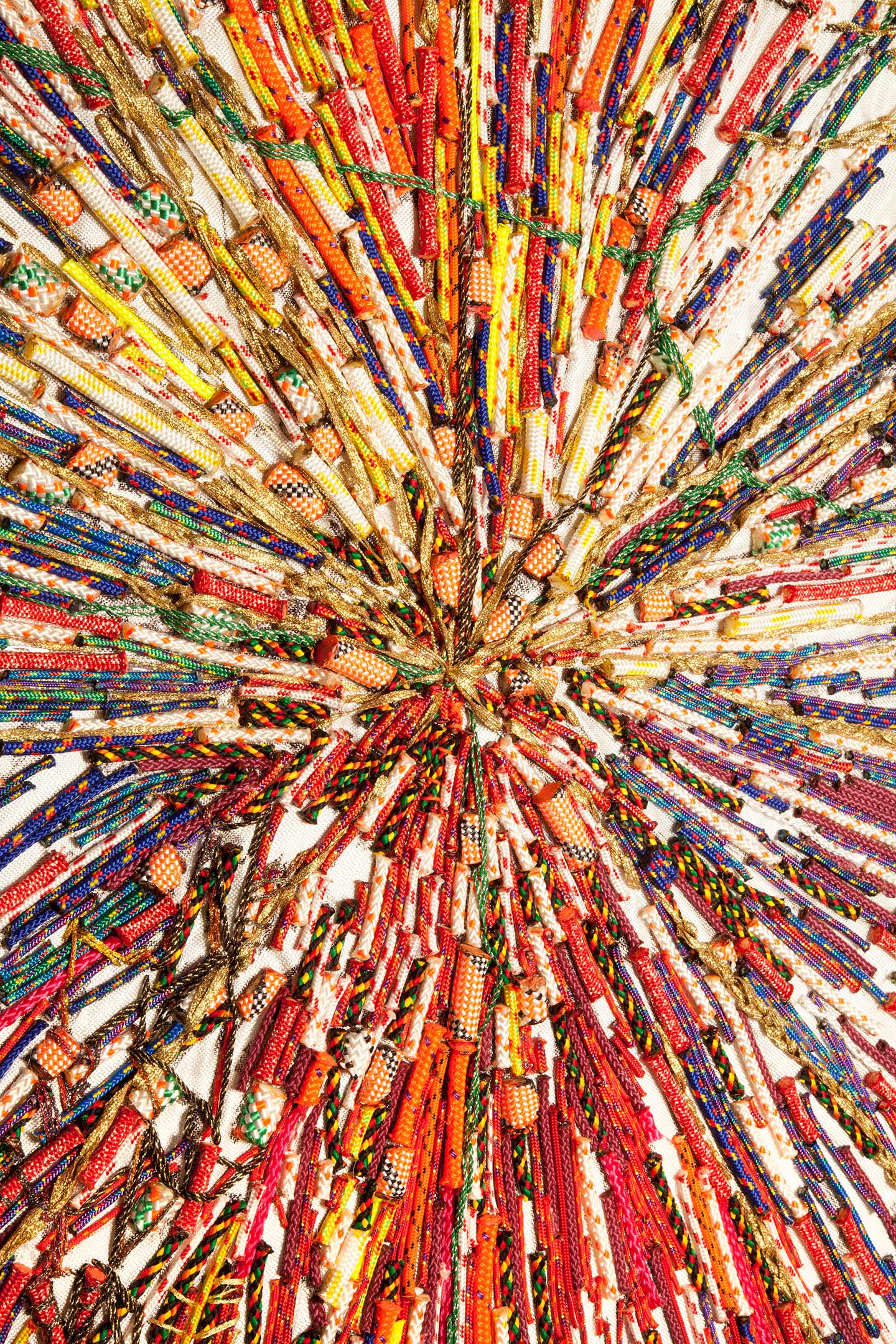 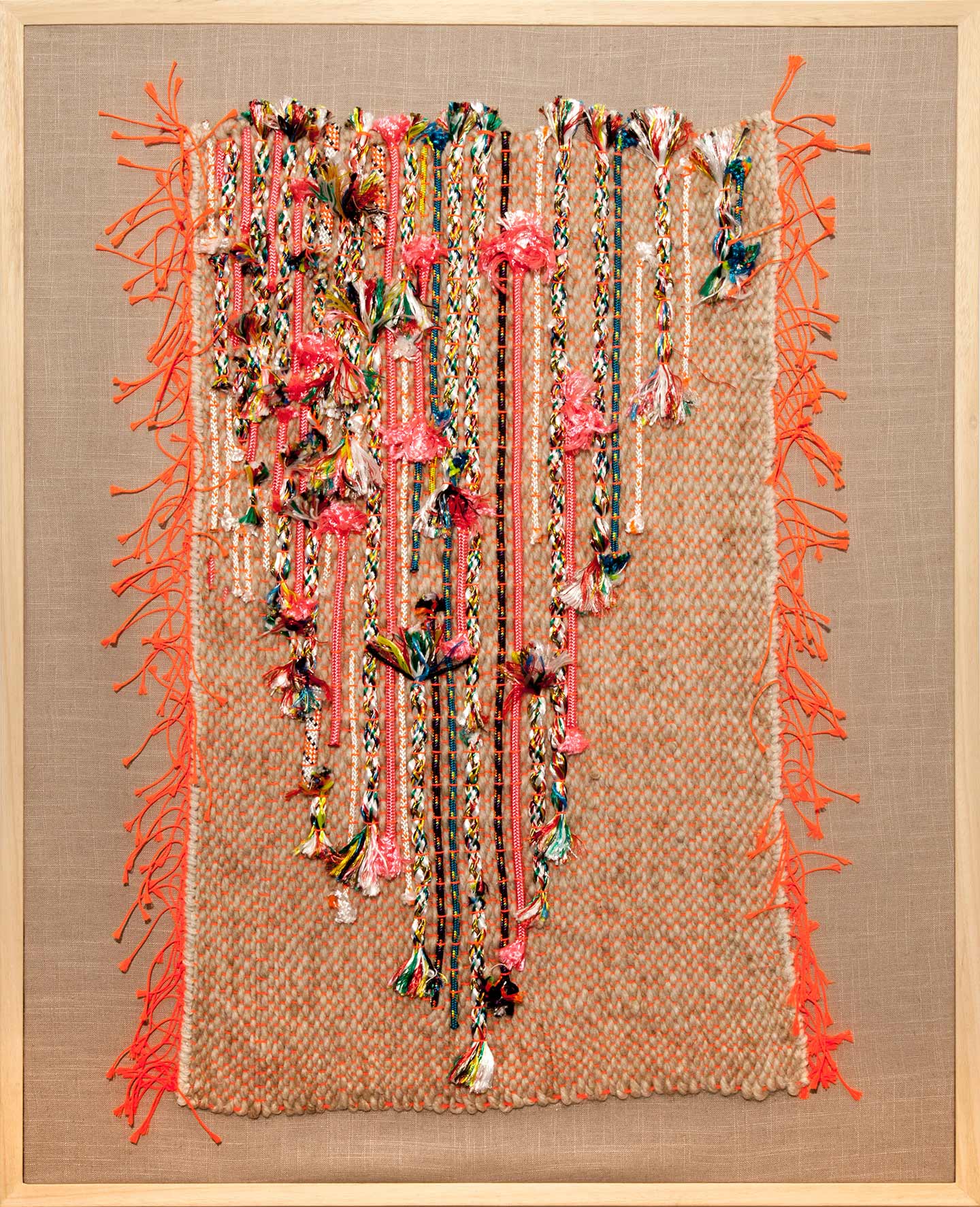 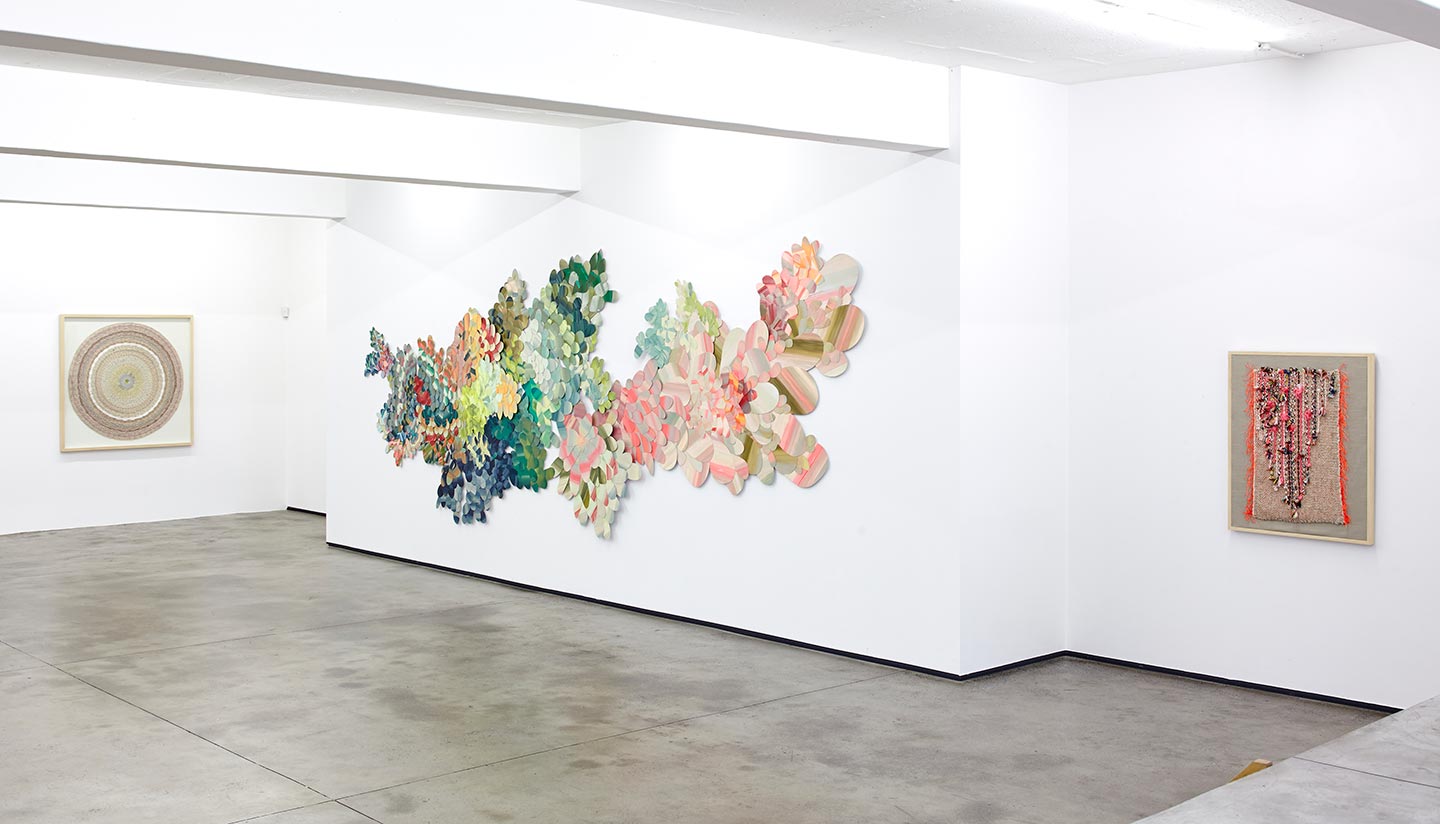 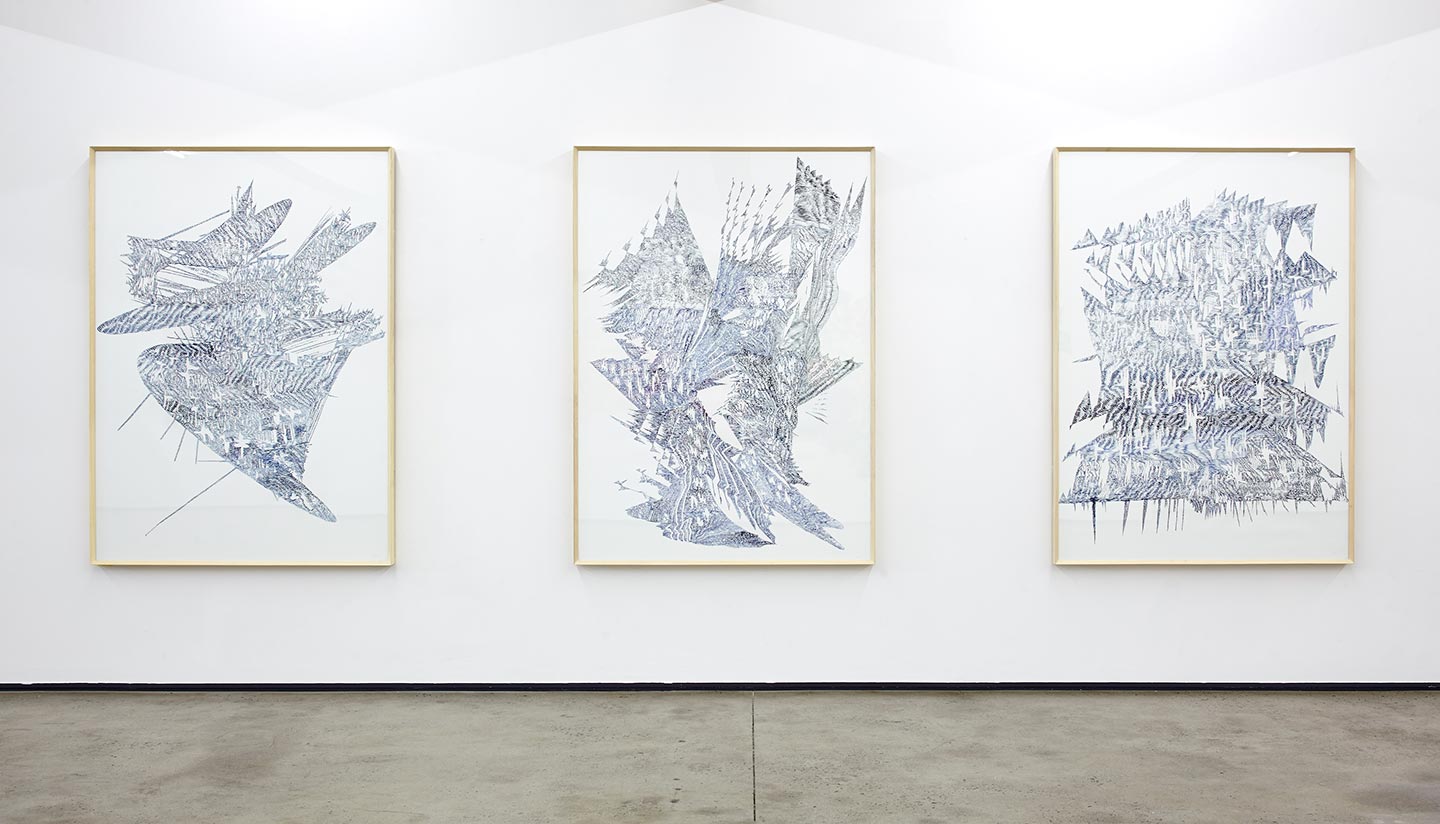 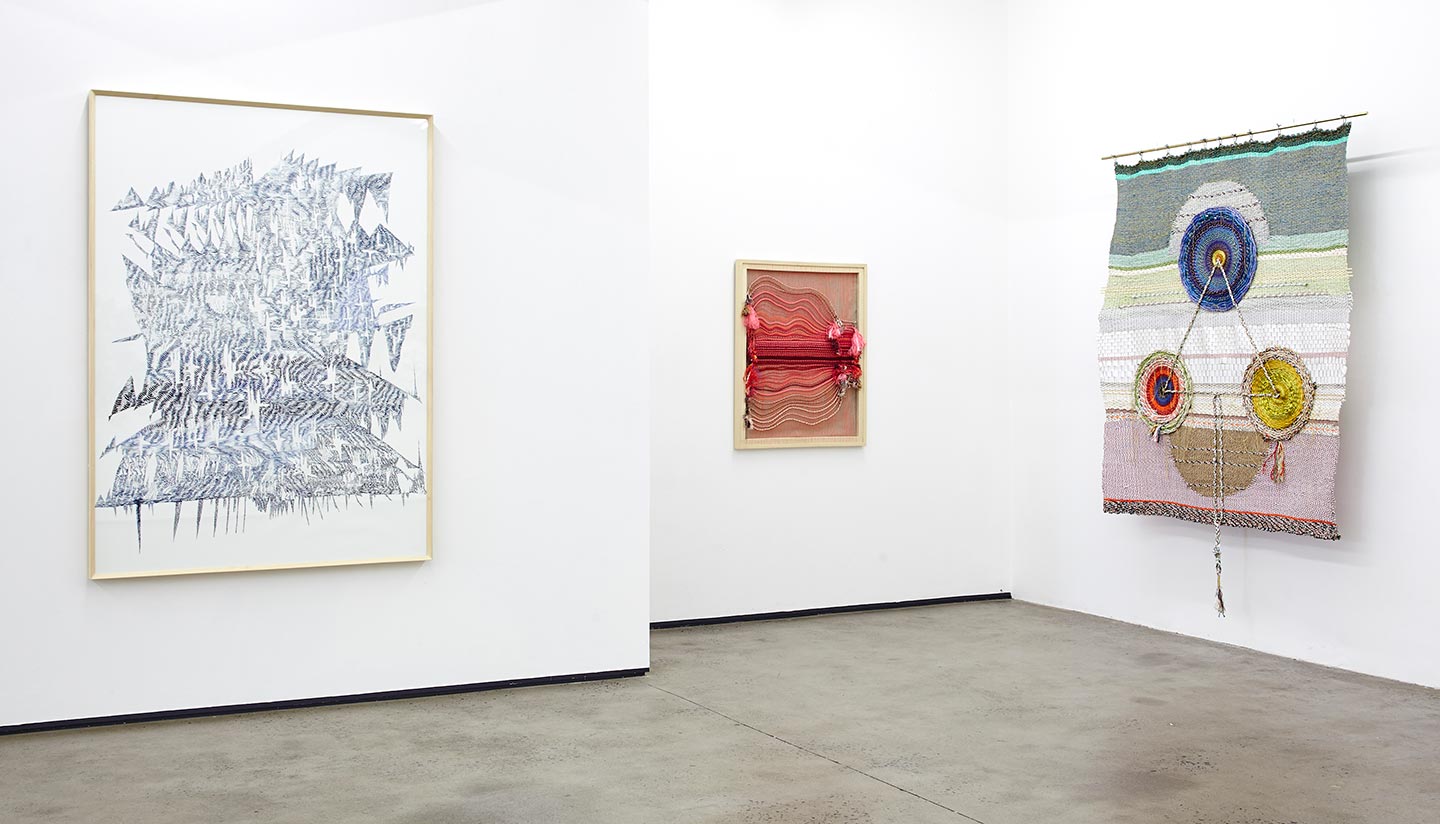 WHATIFTHEWORLD is pleased to present No Place an exhibition of new work by Lyndi Sales.

Lyndi Sales: A hemisphere resting on a horizon.
– Anna Stielau

Do not all charms fly
At the mere touch of cold philosophy?
There was an awful rainbow once in heaven:
We know her woof, her texture; she is given
In the dull catalogue of common things.
Philosophy will clip an Angel’s wings,
Conquer all mysteries by rule and line,
Empty the haunted air, and gnomed mine—
Unweave a rainbow […]

Centuries after Isaac Newton refracted white light through a prism as part of his celebrated “phenomena of colours”, John Keats was busy getting drunk at a dinner party. It was December 1817 and he was young, in posh company and probably keen to impress. Conversation had turned to the line between reason and imagination and with it, to Newton’s eager empiricism: the poor guy was, the Romantic poet Charles Lamb opined, “a fellow who believed nothing unless it was as clear as three sides of a triangle”. Showing off, Keats took the criticism further still and claimed that Newton had “robbed the rainbow of its poetry”. Perhaps his companions nodded sagely, because so pleased was he with the metaphor that he returned to it years later in the poem Lamia. Philosophy, for Keats the quintessential scientific pursuit, had unwoven the rainbow.

The rainbow makes an appealing metaphor for the interface of art and rationalism, often deemed conflicting world views. Blake used it to that end, so did Schiller and Whitman (although the latter preferred his perfectly silent stars). In Thomas Campbell’s repertoire the rainbow is sacrificed again and again on the altar of tyrannical science; a luminous body imagined as always already extinguished. However it’s parsed, this argument is a simple one. Reason strips the world of its wonder. When the rainbow is splintered by the prism, it can no longer be reconstituted – literally or metaphysically – in quite the same light. It loses its magic, becoming a changed thing. A lesser thing.

Then again, wonder, like knowledge, is only ever limited by imagination.

For every artist ready to give up on science, there are others who stage their practice where creative inquiry and empirical method collide. In Lyndi Sales’ new body of work, a scientific register– an interrogation of the properties of light, say, or the cold crystalline structure of chemicals– is refracted through the lens of art and infused with a deeply personal aesthetic sensibility. Conceived symbiotically, art and science take on new and curious configurations.

To inhabit multiple worlds of representation simultaneously is no small feat. Tellingly, Sales finds her inspiration in the “basic building blocks of the universe”. She looks to platonic solids and to colour and to light, key ingredients in both artistic and scientific world-making. For Sales, the rainbow – a recurring motif in her practice – consolidates these so-called building materials. It is sited (sighted?) at the intersection of reason and wonder, but in sheer sublimity somehow exceeds the expectations of both. Like Keats before her, she sees the rainbow as wonder afforded material form.

More than that, Sales’ rainbow embodies a utopian impulse. Not in the sense of Sir Thomas More’s ideal political egalitarianism, or at least not only in that sense, but more in its associations with the not-here and the not-now. A rainbow is ephemeral and transient. It is always just out of reach, and yet it arcs enticingly above the present and extends into an unpredictable future just over the horizon. Perhaps there is gold on both ends. From here it is impossible to tell.

Rainbows do not last, but they will always come again.

Utopian thought is frequently future-oriented. In its truest form it frames the desire for alternatives, for a better way of living. That can be risky – it is, after all, far harder to look at the present than to dream of the future; far harder to boldly stay than boldly go –but it is also an enormously generative enterprise. A commitment to utopia quickens consciousness to the possibility of a life lived otherwise, elsewhere. The rainbow is also a bridge, remember. In Nordic mythology, the rainbow bridge Bifrost connects the world of the Gods to that of mortals. In Judeo-Christian tradition, the rainbow is a covenant with god: a promise that there will indeed be a future. Its slim band of colour stretches through space-time, equal part science and magic, and illuminates everything it touches.

Sales finds rainbows everywhere. In fractals, in oil slicks, in extragalactic nebulas and in the satellite maps that survey the surface of the earth. They weave their way through her work, sometimes literally. This turn to weaving, with its delicacy and enormous capacity for detail, is a logical progression of the artist’s ongoing interest in filigrees, nets, meshes and matrices. Rather pleasingly, her newfound interest in thread-work could also be read as an extension of Keats’s metaphor – a re-weaving of the poet’s long-unravelled rainbow.

Richard Dawkins titled a book after Keats’ phrase. In ‘Unweaving the rainbow’, his treatise on (among other things) the complementarity of art and science, he writes,

The feeling of awed wonder that science can give us is one of the highest experiences of which the human psyche is capable. It is a deep aesthetic passion to rank with the finest that music and poetry can deliver […] Science is, or ought to be, the inspiration for great poetry.”

He’s talking about humanity’s voracious appetite for wonder. To Dawkins, and I’d argue equally to Sales, it is wonder that binds art and science in mutually beneficial exchange. Science restocks the poet’s metaphor bank and enriches the artist’s palette. It creates depth, breadth and flexibility of thought. Similarly, without poetry and metaphor, the grandeur of the universe would elude language. Without art, its beauty would go unappreciated.

Six-hundred light years away in the constellation Orion, the red supergiant Betelgeuse is birthing rainbows. Nearly two billion kilometres in diameter, this vast mass is contoured by interstellar winds that set clouds of silicate crystals and alumina dust whirling across its surface. Under infrared light, the material it sheds into space is set ablaze in a complete, glorious spectrum of colour. Soon – by the universe’s standards – the old star will collapse into a supernova.

The iron in our blood came from the explosion of such impossibly massive stars, aeons ago. The calcium in our bones too. We’re star stuff, as Carl Sagan liked to say, wonderingly.

It is understandable, given her broader thematic concerns, that Space is invoked again and again in Sales’ new work. But for Sales it isn’t simply a “final frontier” in the vulgar imperialist sense that conceives of the entire universe as available for conquest…yet another border post to be dusted with ammonium perchlorate, the compound found in both missiles and rocket fuel. That’s too-common jingoistic vision has found its latest expression in the all-American astronaut fantasy Interstellar. Matthew McConaughey, chiselled jaw clenched, laments, “It’s like we’ve forgotten who we are. We are explorers, pioneers, not caretakers.” As if one cannot take care and explore. As if the two are diametrically opposed.

Sales situates her work on a continuum between the roles of empathic caretaker and explorer. She devotes careful attention to the troubled space of the world, while keeping one eye trained on the heavens. The universe contains both art and science, we are reminded, and affirms both reason and wonder.

And maybe magic, too.

Perhaps Isaac Newton wasn’t the first of the rationalists, as Ben Johnson has suggested before me, despite the fact that he ushered in an age of reason. Brazen enough to fracture light itself, perhaps he was the last of the magicians.

Even Keats would approve of that.