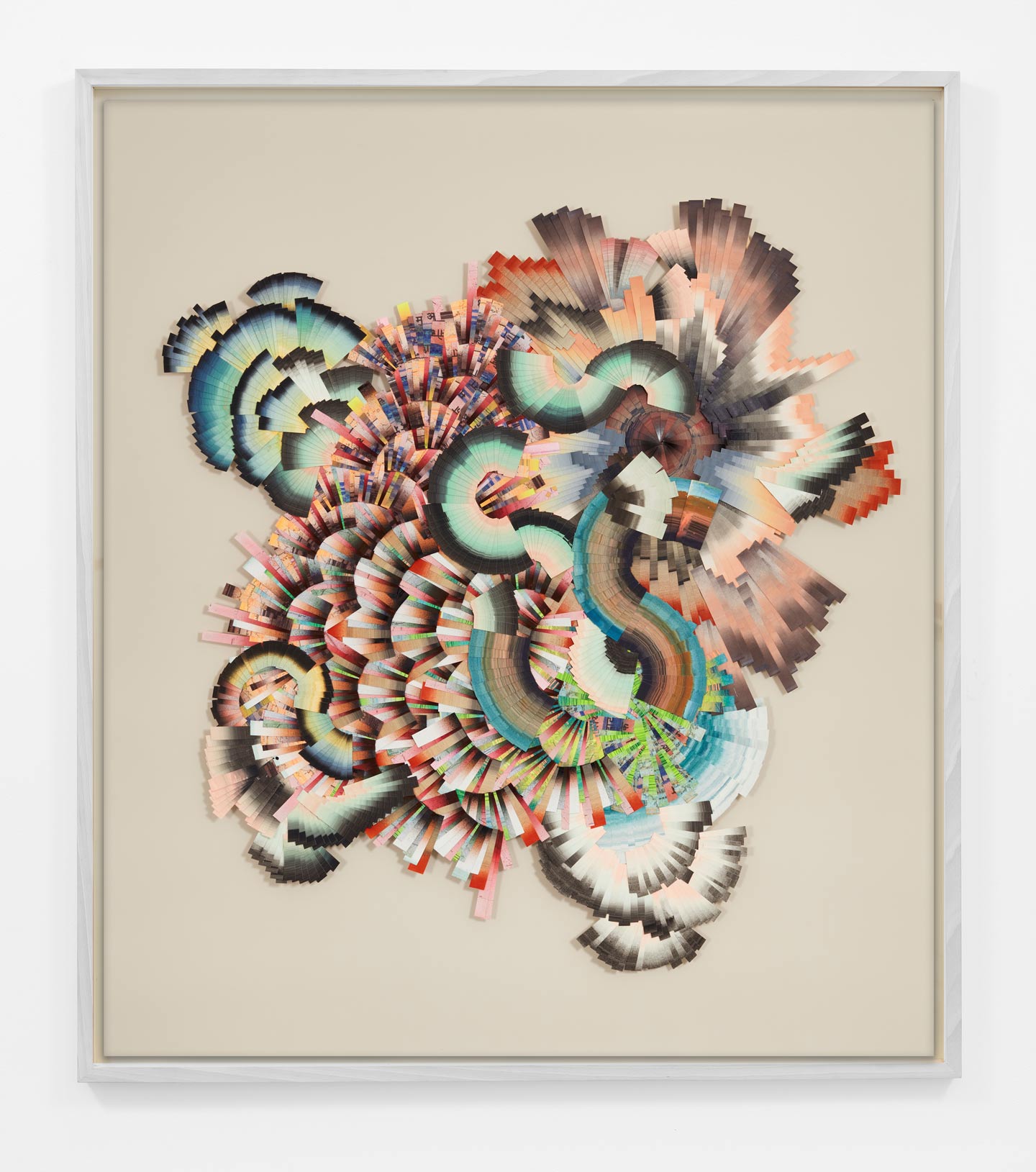 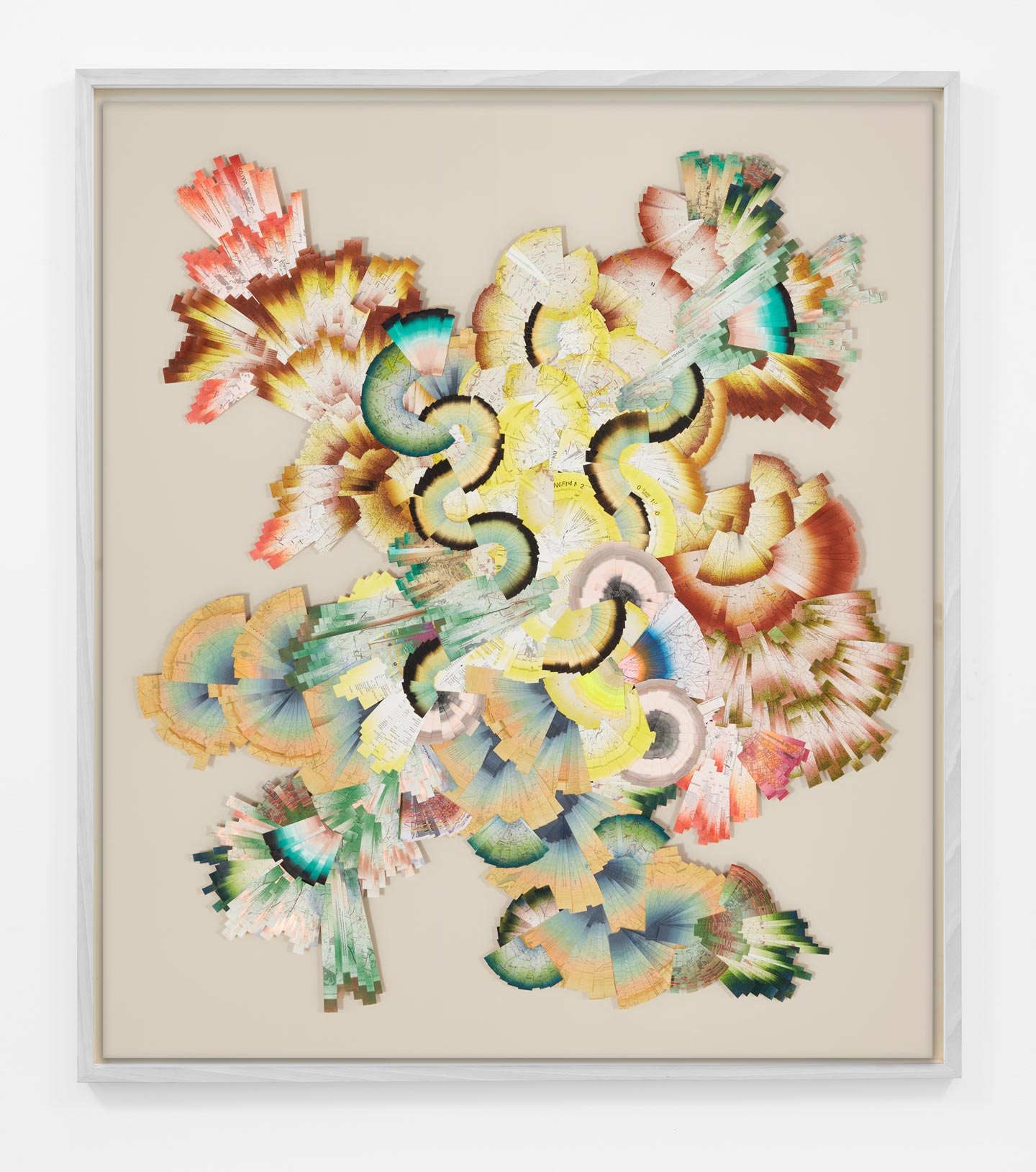 Surrendering to the Purge 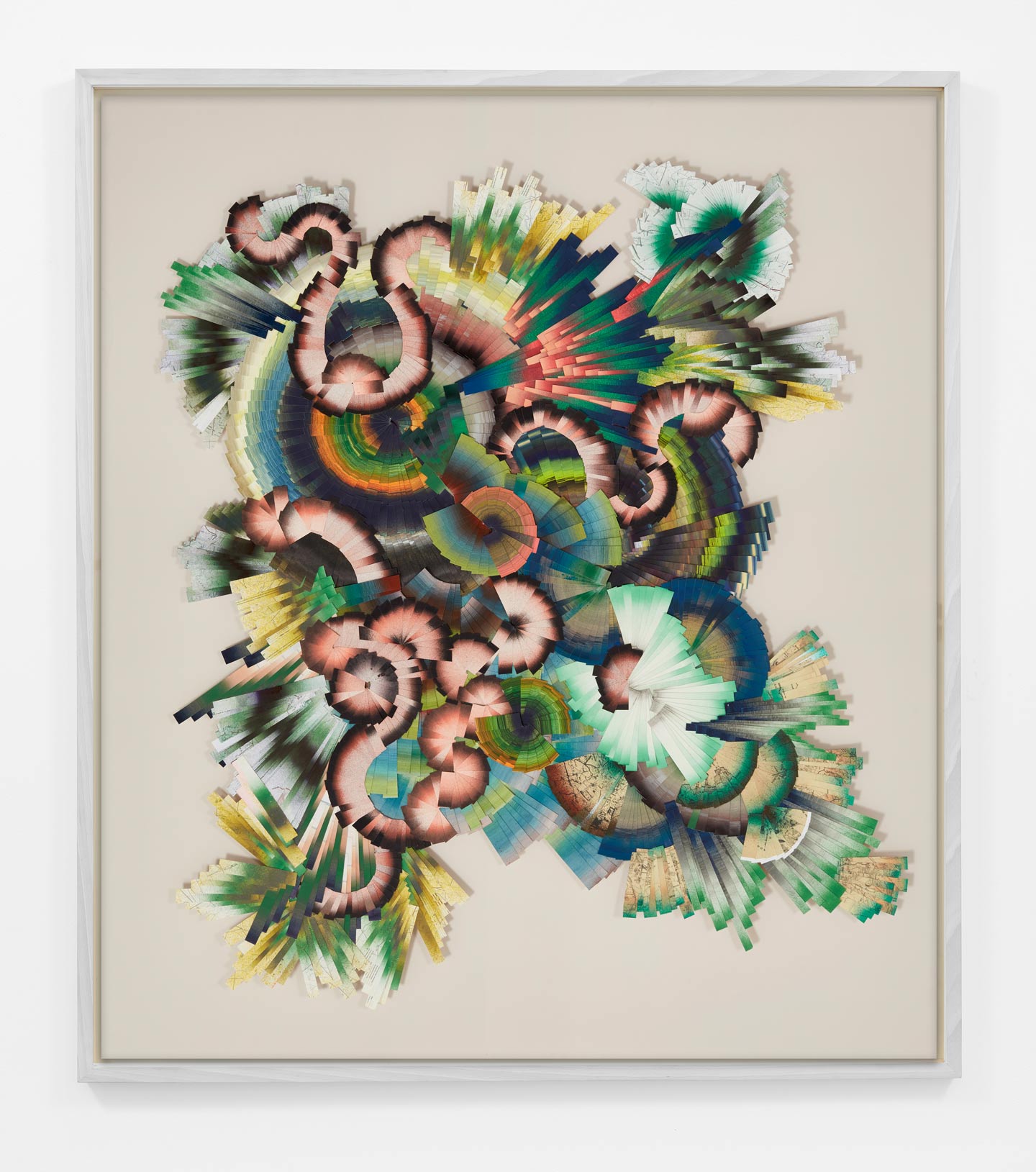 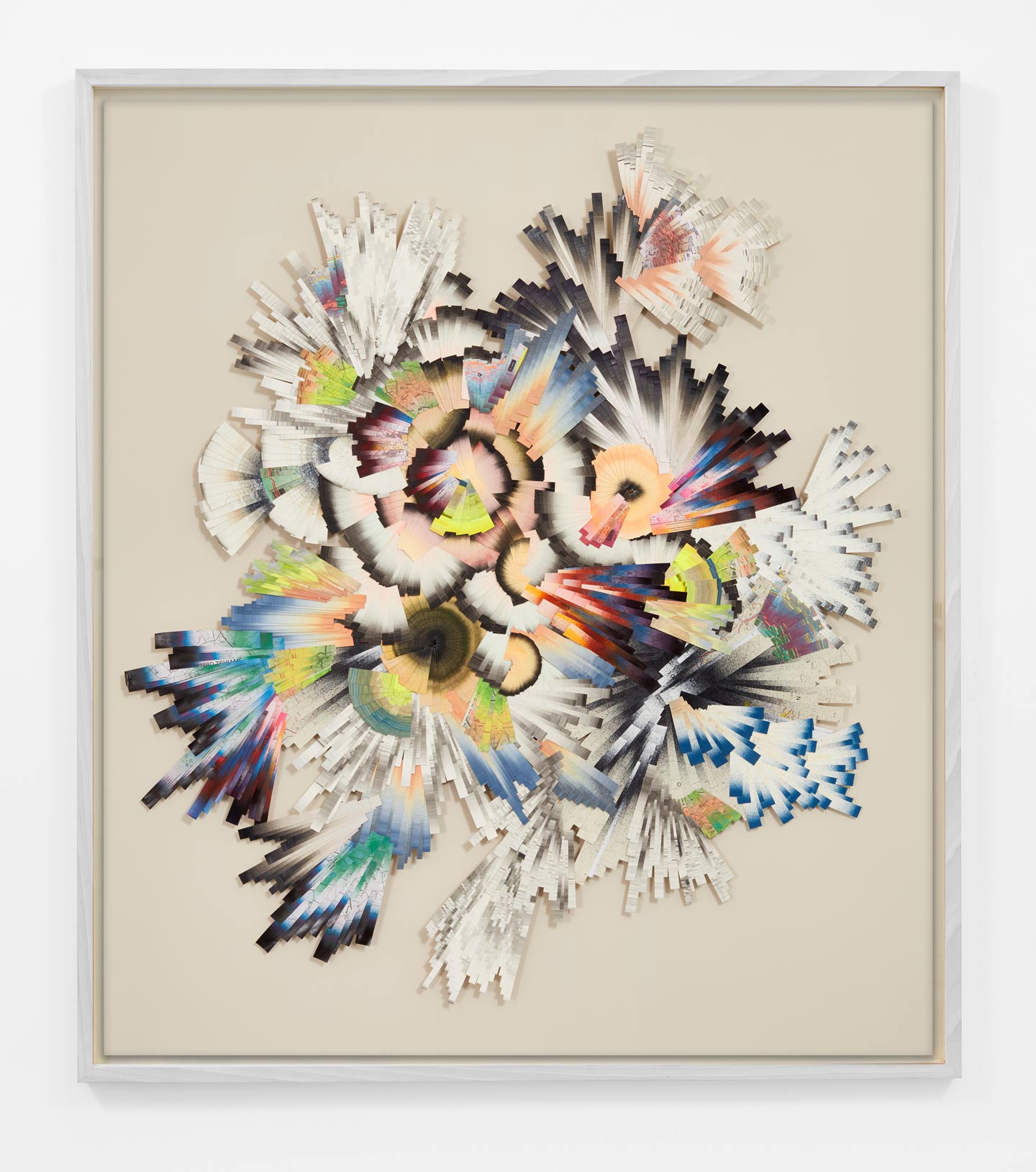 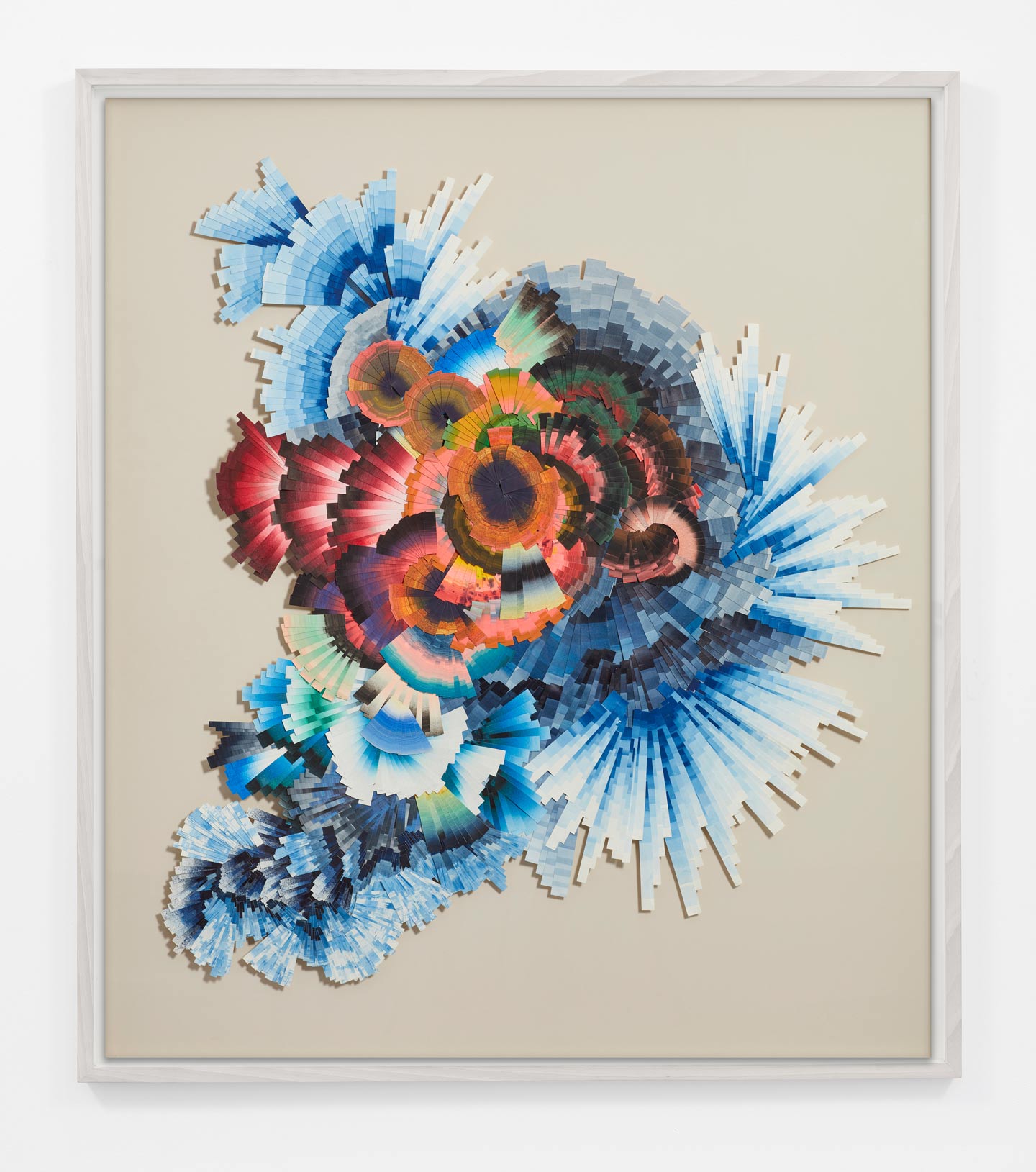 The Optimist Disguising its Fear 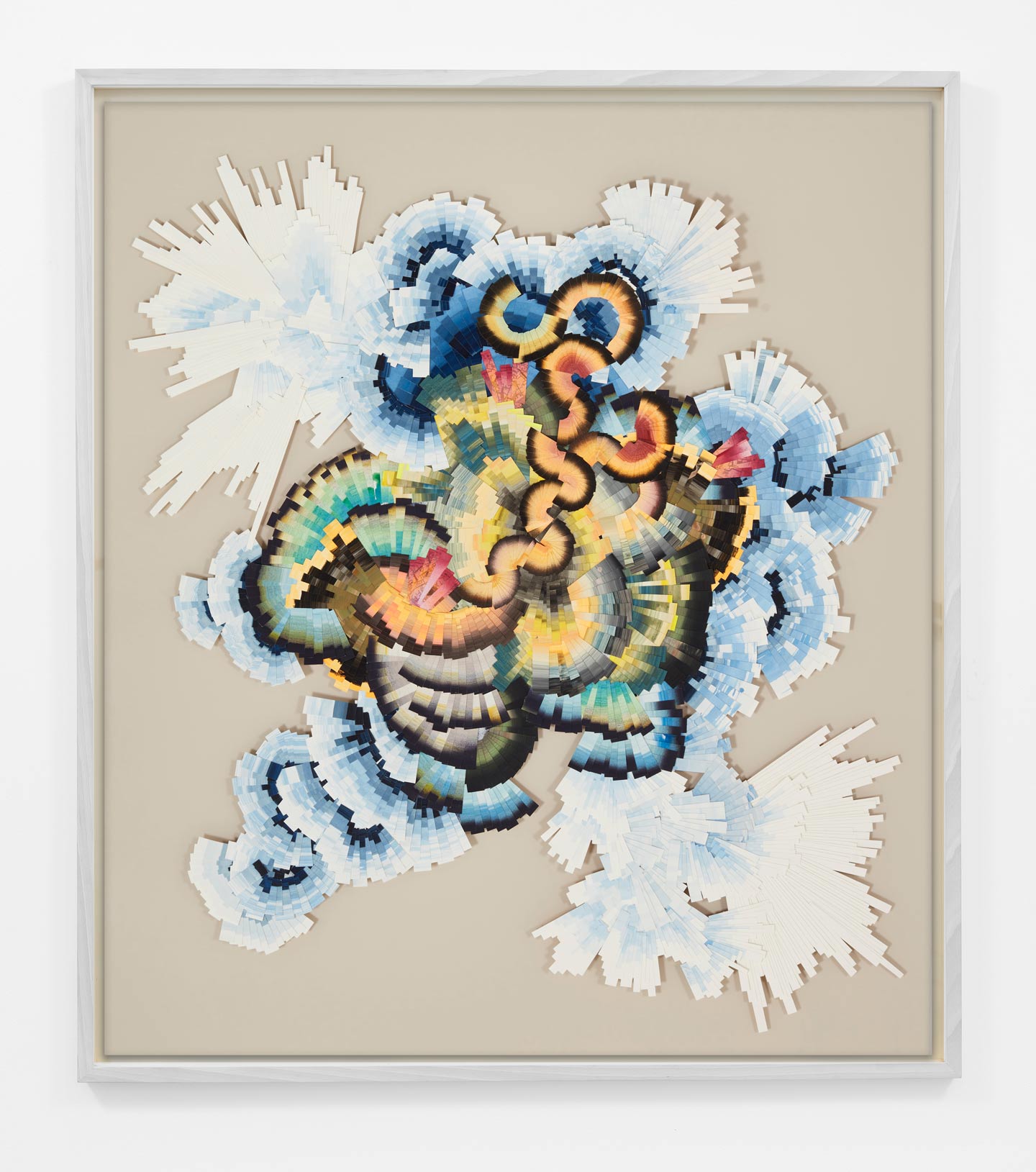 The Spiritual Seekers Ecstasy and the Agony 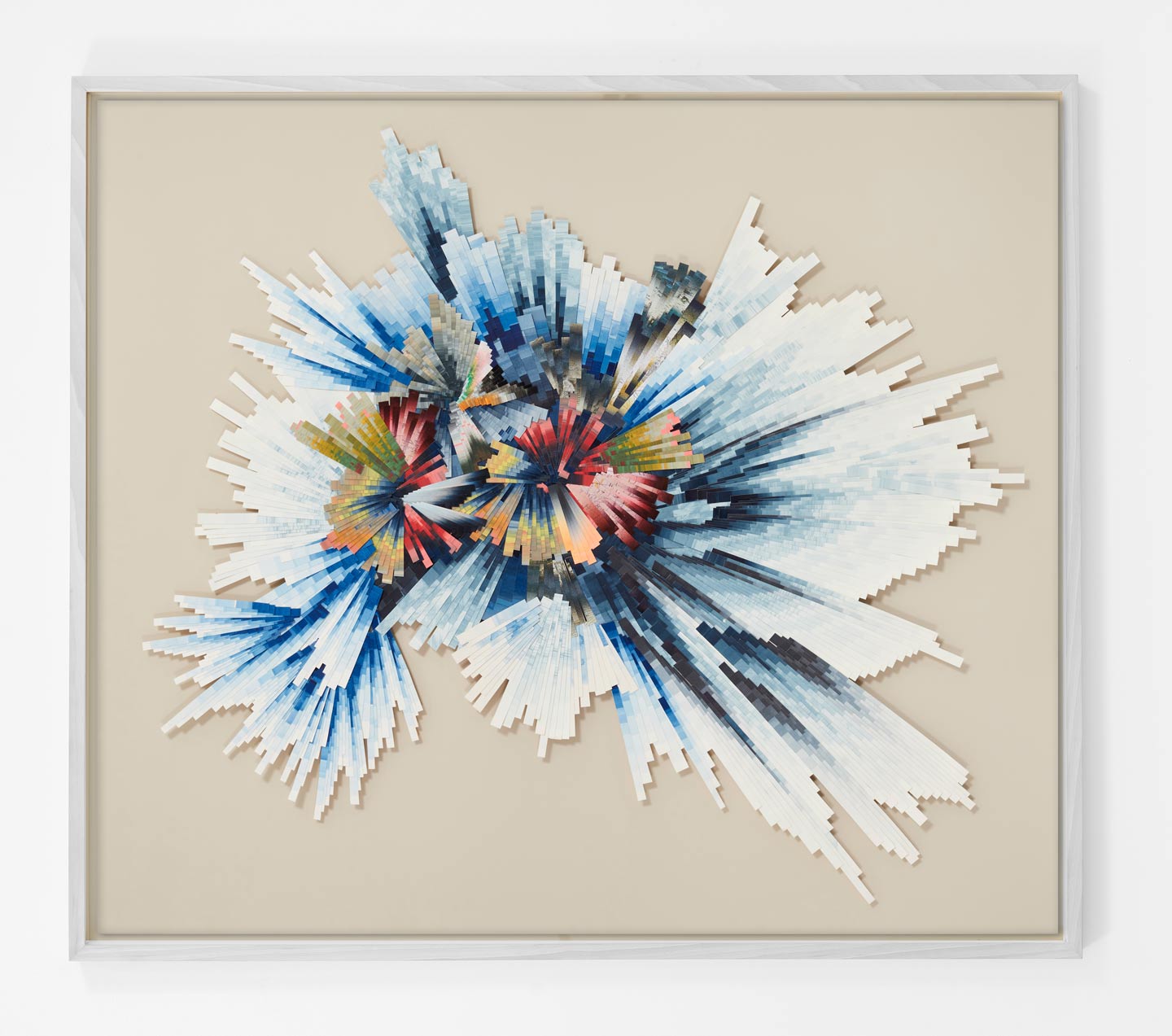 The Hearts Is an Internal Sun 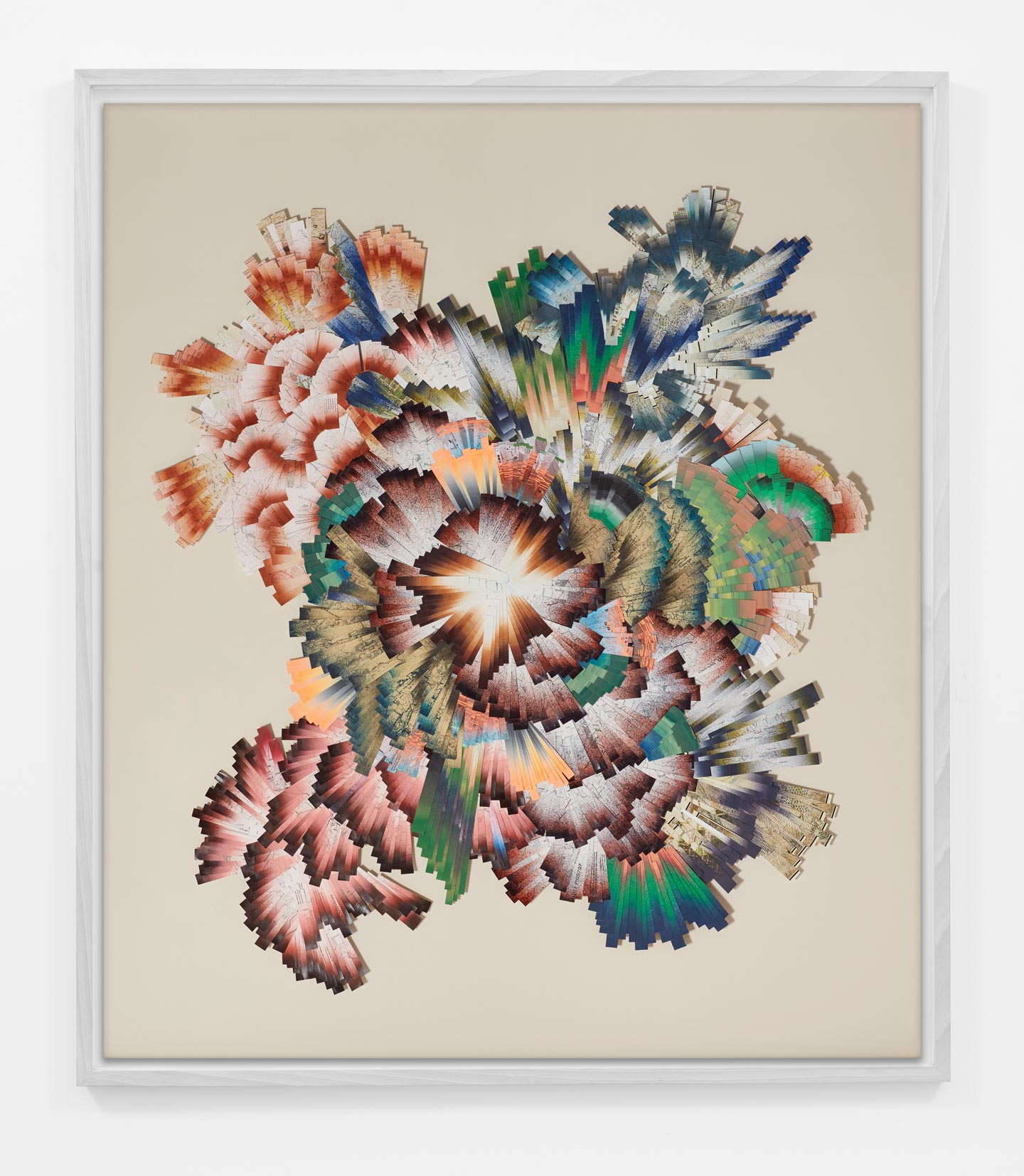 The Weight of Your World 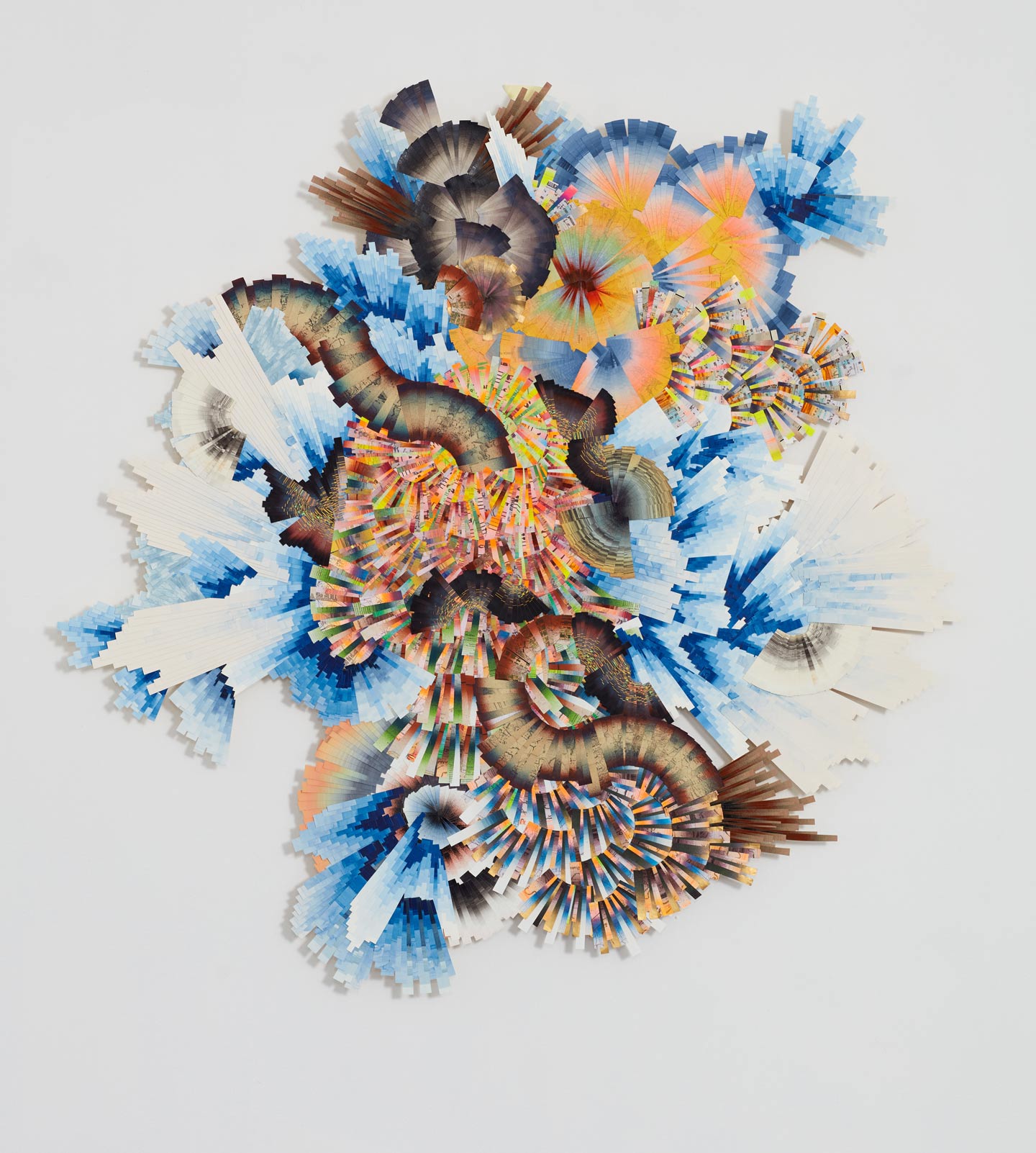 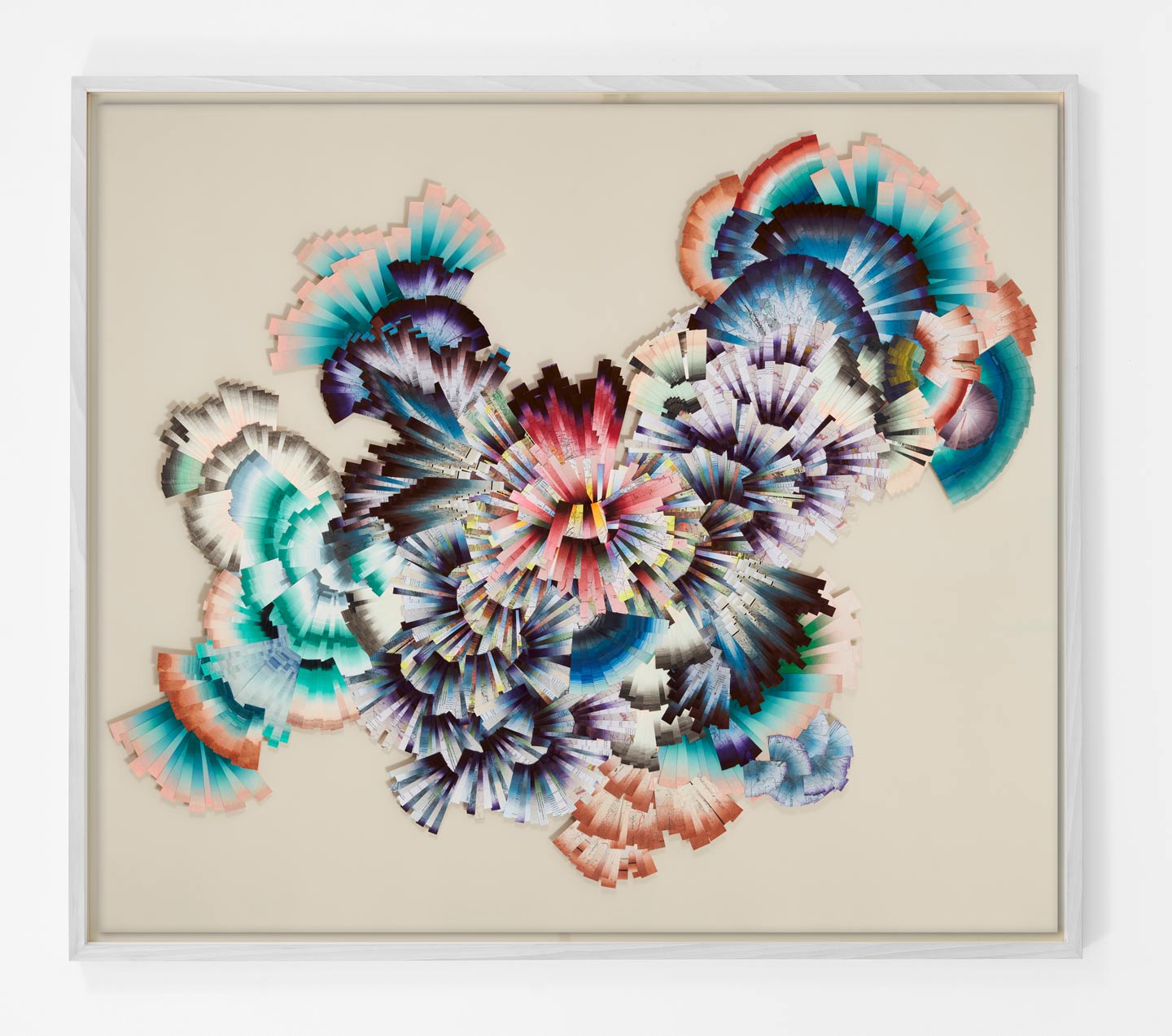 Fragments Come in Bits and Pieces 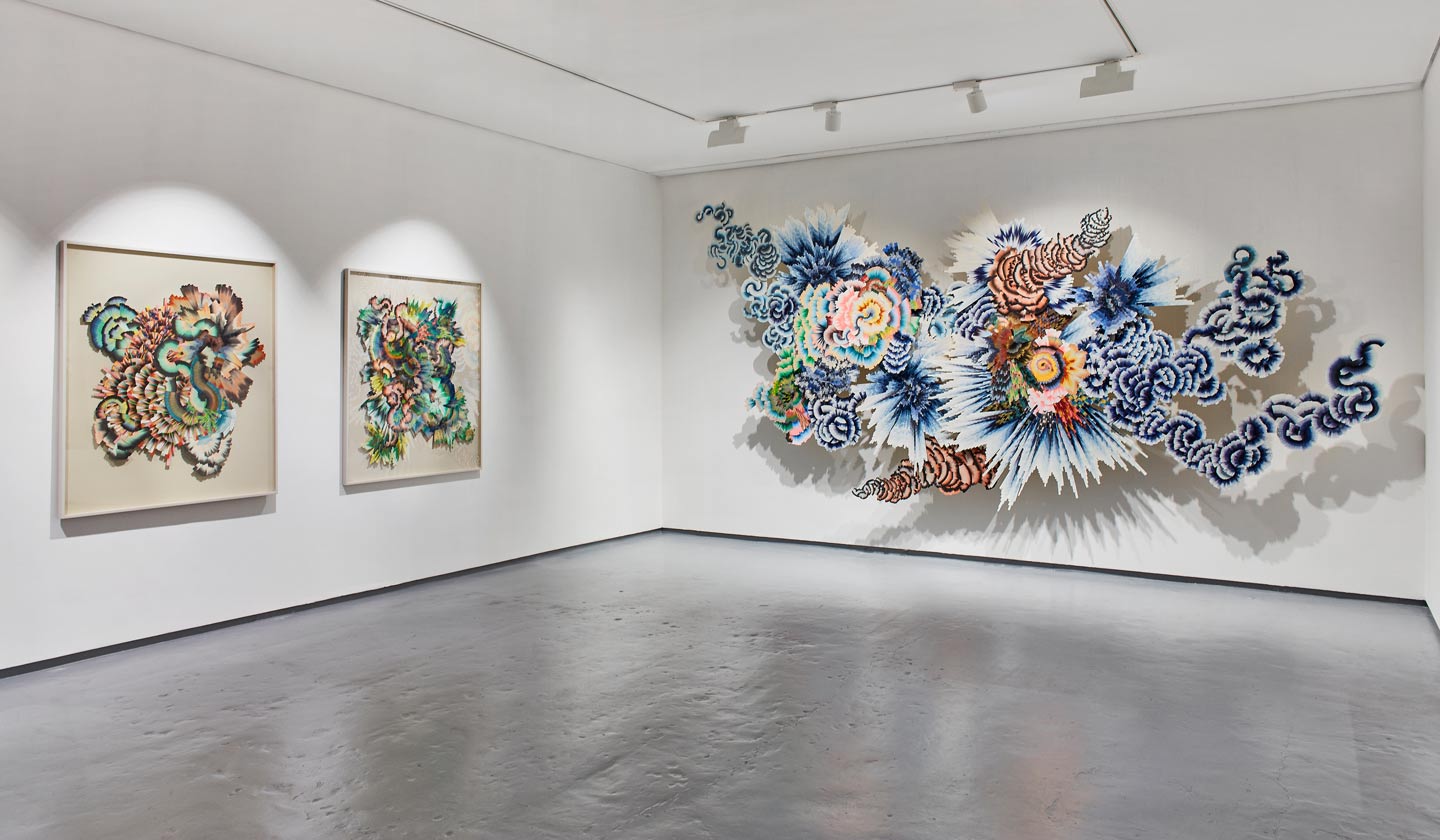 WHATIFTHEWORLD is pleased to present Nature’s Code, a solo exhibition of collage and installation by Lyndi Sales.

Nature’s Code is a bold and explorative body of work by Lyndi Sales – and in many ways, an evolution of her exhibition at Art On Paper in New York (2020), which held at its core an exploration of fragments. The latter defined as “a small piece or a part, especially when broken from something whole.’’ Sales’ work is characterised by a pulling in and compiling of various fragments; not only in relation to the medium itself, hand-cut paper or vilene, but with the artist’s piecing together of memory, of her own past visions and of fractured elements from something whole. Sources of inspiration and reference that have been stripped down and deformed beyond instant recognition or obvious association. Sales introduces paper ephemera into many of these artworks for the first time – transitory printed material or paper with memory – that is intricately cut into and coloured over. Sales’ artistic practice is an undeniable juxtaposition of dismantling and assembling. A building-up after a breaking-down. And a gentle equilibrium between that which is whole and fragmented.

Inspired by scientific and biological data, by sound and music, and the deepest place in her subconscious mind – these dynamic works are the essence of many different things. Their expansive nature draws the viewer in and prompts a hybrid of recollection and imagination; a kite in motion, a biological specimen splayed, segments of human genome, crystalline structures, exploding stars, or pieces of material as code. Perhaps Nature’s Code is a true embodiment of its title, revealing the artist’s own personal creative expression, born from a deeply meditative practice, combined with various layers of reference which can only be truly understood by the individual viewer as they experience it. Encompassing works that are both colourfully psychedelic and somewhat kaleidoscopic in nature, both framed and unframed – even the viewer’s experience has been left undefined.

Lyndi Sales’ practice can be seen as a process of layering, on multiple symbolic and physical levels. “I always start with one piece in the centre and it grows outward. I never know what I am making. It’s just a feeling,” says Sales, whose practice is an increasingly subconscious expression, a retreating into the moment and an ever-deepening meditation on colour. Colour is paramount in this new body of work and there is a particular vibrancy to the artist’s recent exploration with it – and undoubtedly linked to an experimentation with form, which emerges in the artworks as both geometric and organic. Another important element of Sales’ practice is that of sound and the artist’s profound appreciation for music, the latter often reverberating throughout her studio as she makes. Perhaps it is the vibration of the songs, ephemeral and energetic, that have also assimilated into the works and their colourful compositions – reminiscent of Wassily Kandinsky who so aptly said that “colour is the keyboard. The eye is the hammer. The soul is the piano with its many strings. The artist is the hand that purposely sets the soul vibrating by means of this or that key.” Lyndi Sales has given her visual language another layer of compositional complexity with Nature’s Code, resulting in the creation of her own powerful system for representing both information and dream with fragments – or perhaps the strength lies in the fragments themselves, coded in a way that they can only be understood by the person receiving it.

Lyndi Sales is based in Cape Town. Her work exists at the interface of art and rationalism, reason and wonder. Working with hand-woven textiles, sculptural installation, intricately cut perspex paper and collage works,  Sales’ practice  is  located in a scientific register where she often interrogates the properties of light or the crystalline structure of chemicals.  Her departure point is refracted through the lens of art and infused with a personal aesthetic sensibility. Sales’ surprising combination of art and science take on new and curious configuration that often shed light on the fragile nature of our existence and temporality.

Sales represented South Africa at the 2011 in the 54th Venice Biennale. She has held solo shows internationally at Galerie Maria Lund in Paris, Toomey Tourell in San Francisco and M Contemporary in Sydney – and locally in South Africa at the Goodman Gallery,  Gallery Momo and the Everard Read Gallery. She has participated in numerous group shows in South Africa, the USA, Europe the UK, Her works can be found in major collections locally and internationally.