In Defense of Our Memories 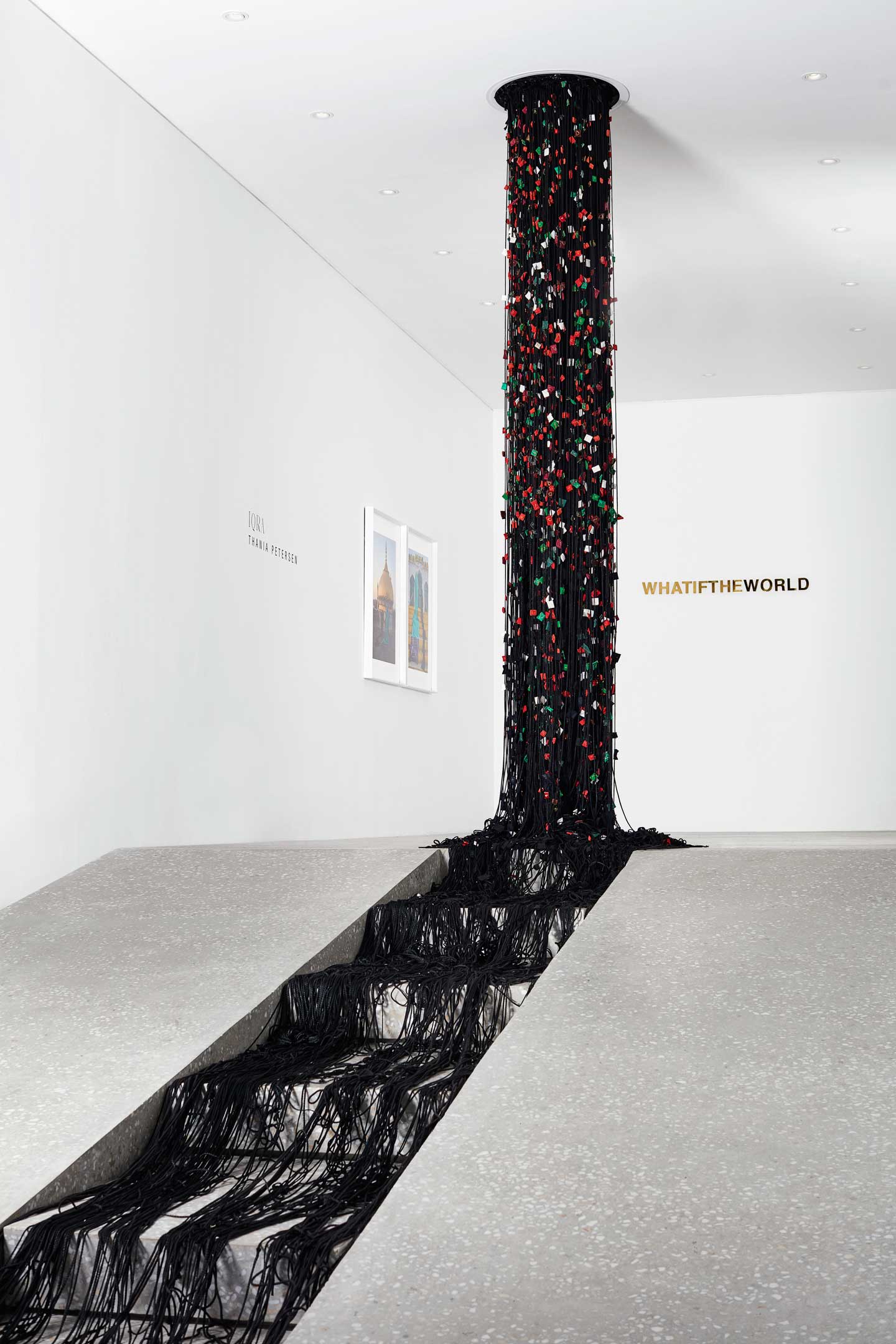 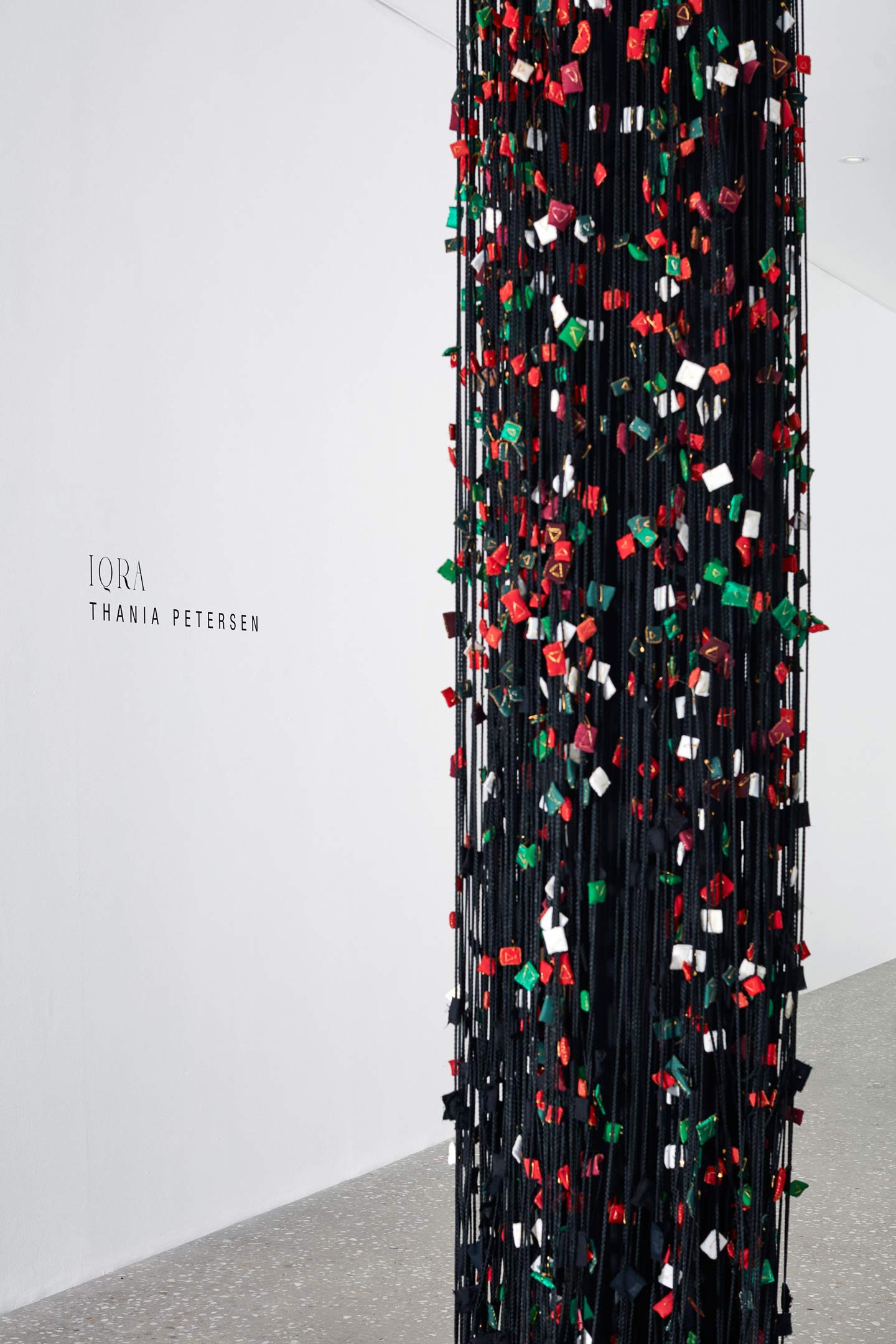 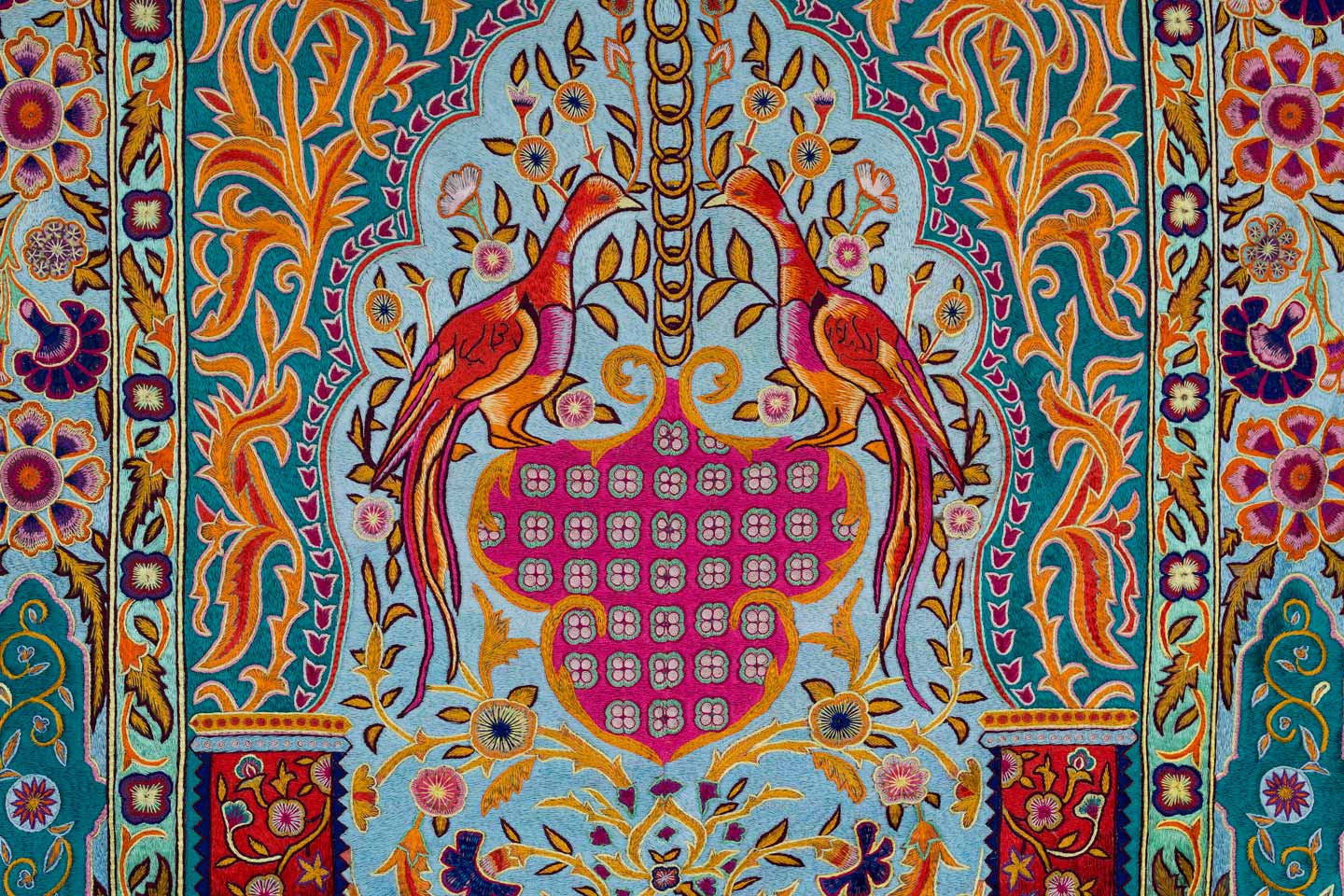 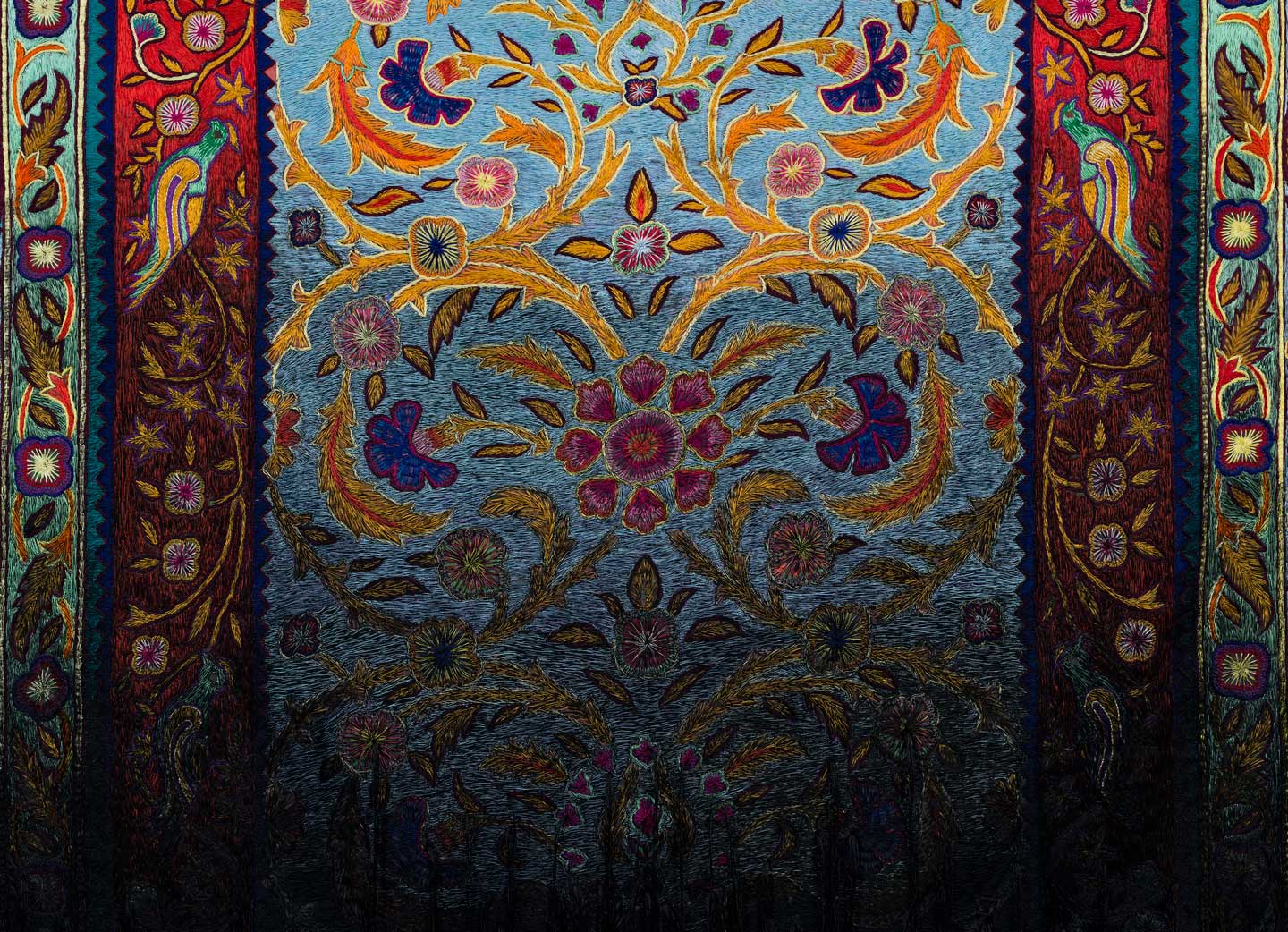 Of Birds and Trees and Flowers and Bees 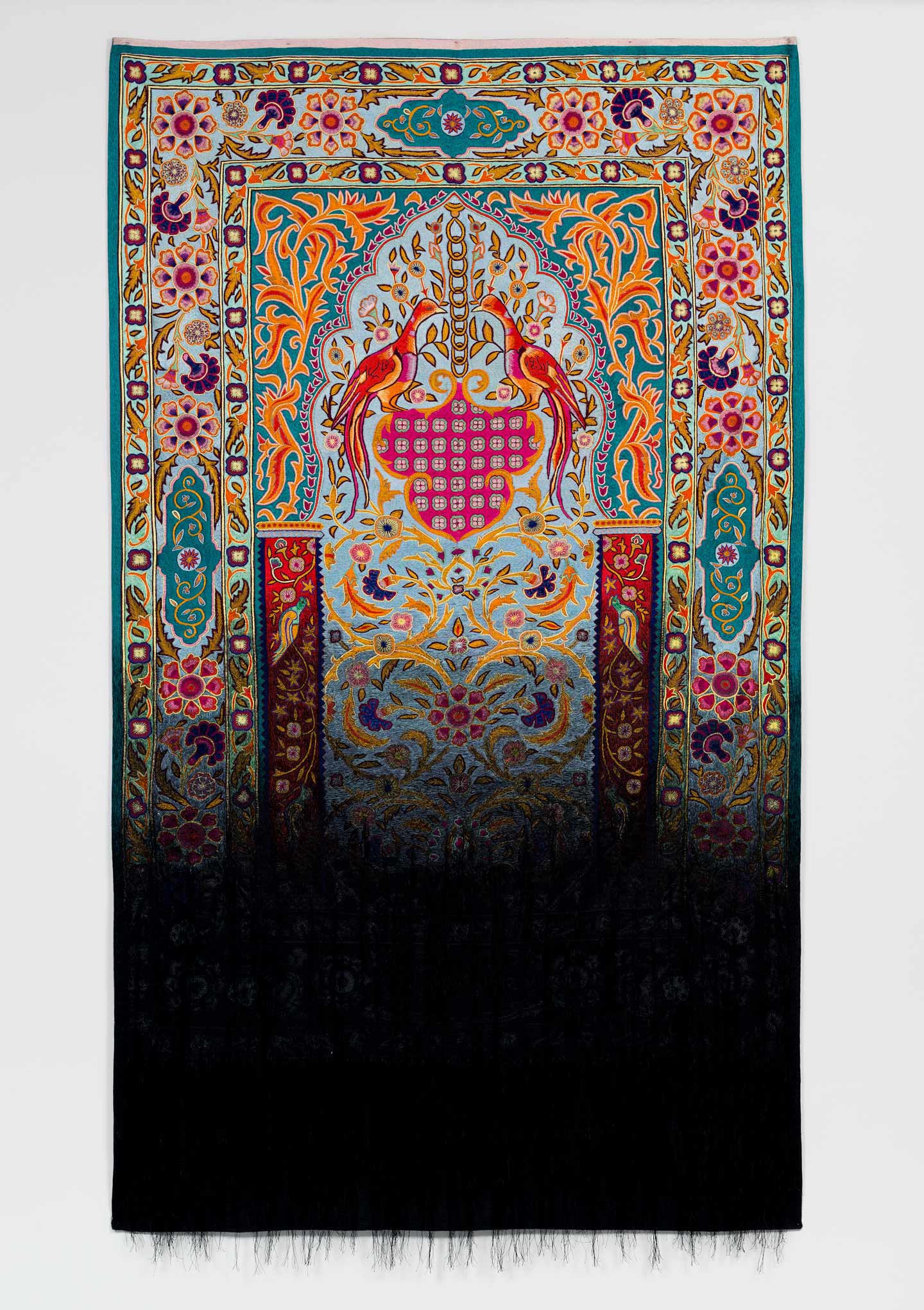 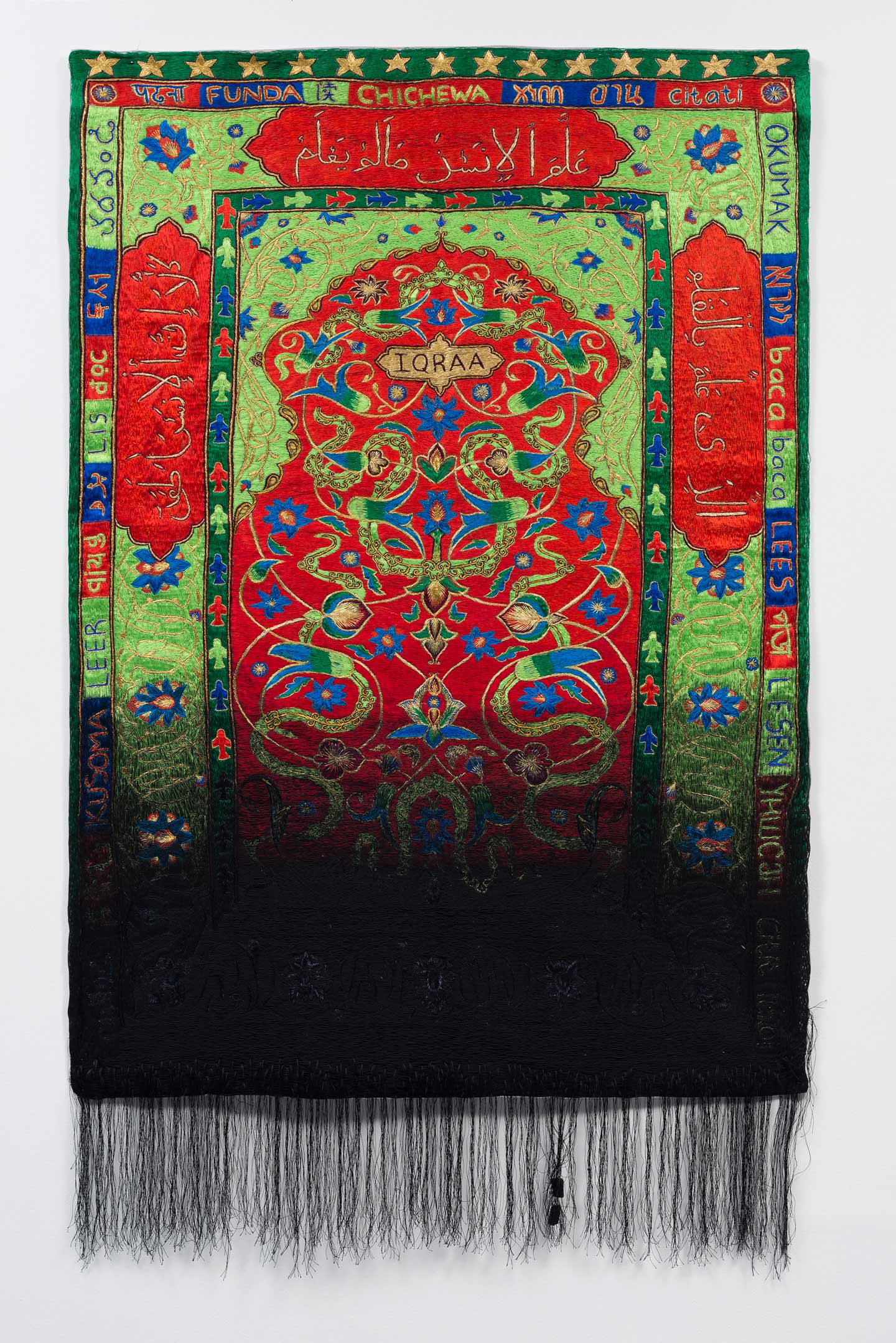 What Falls From the Sky 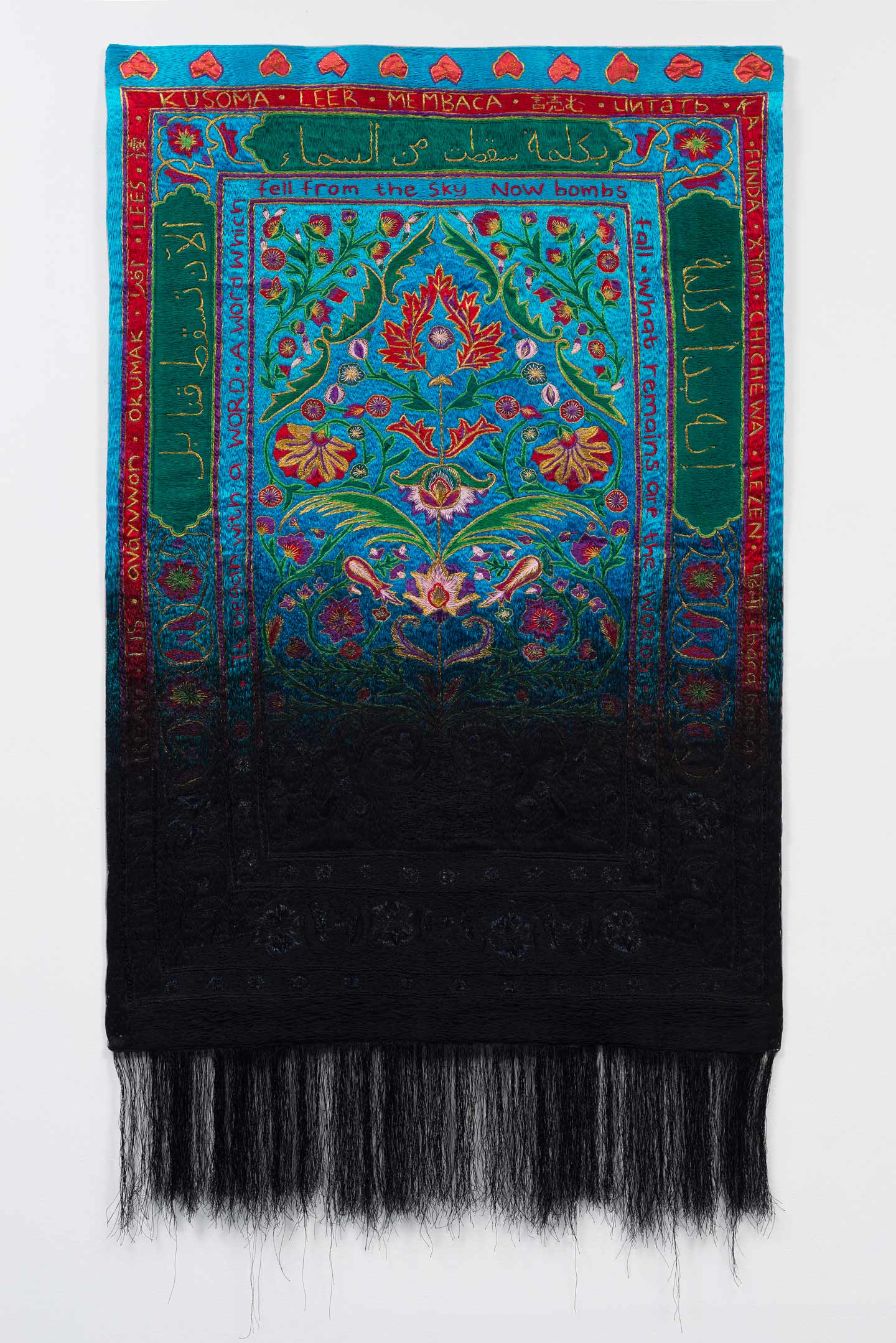 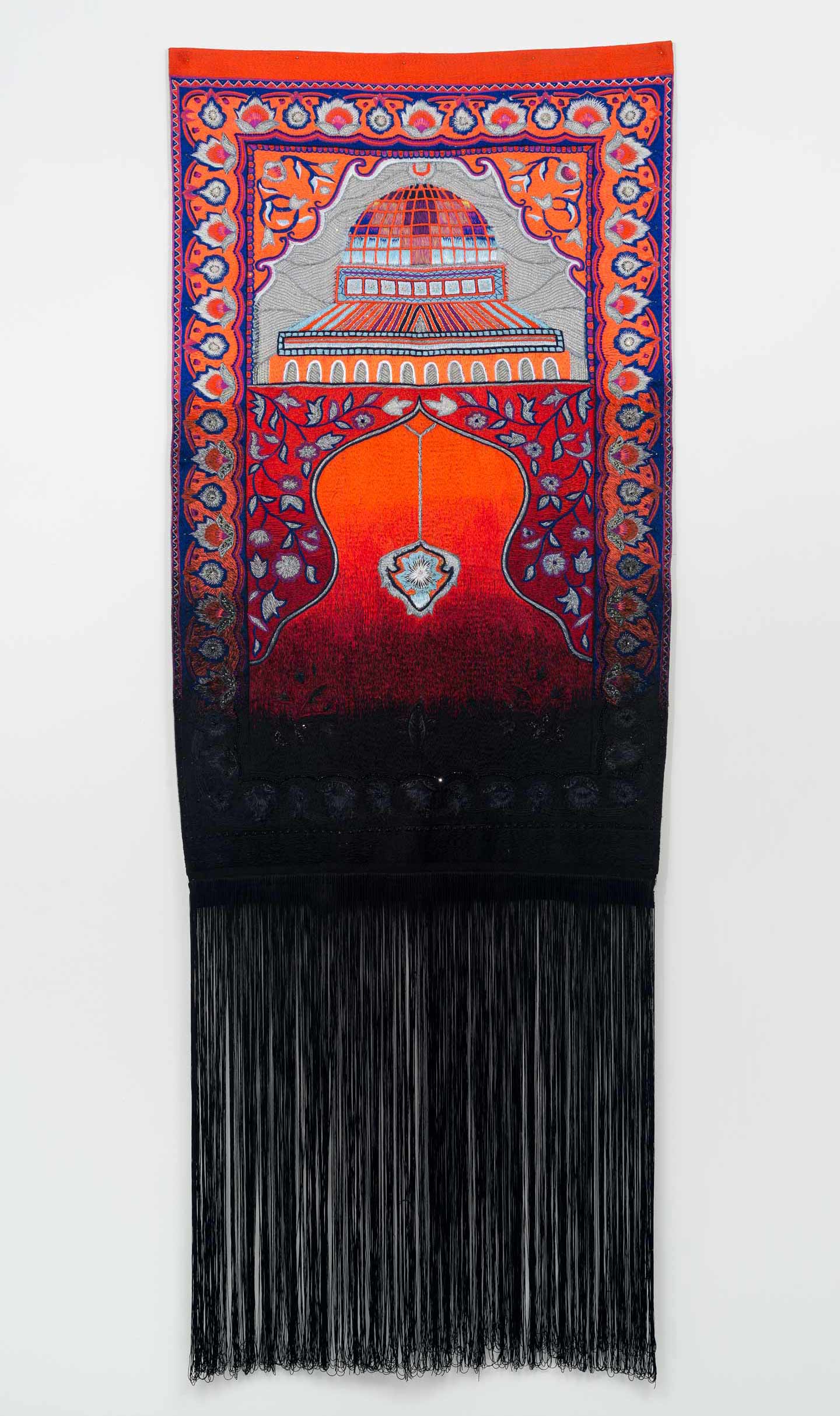 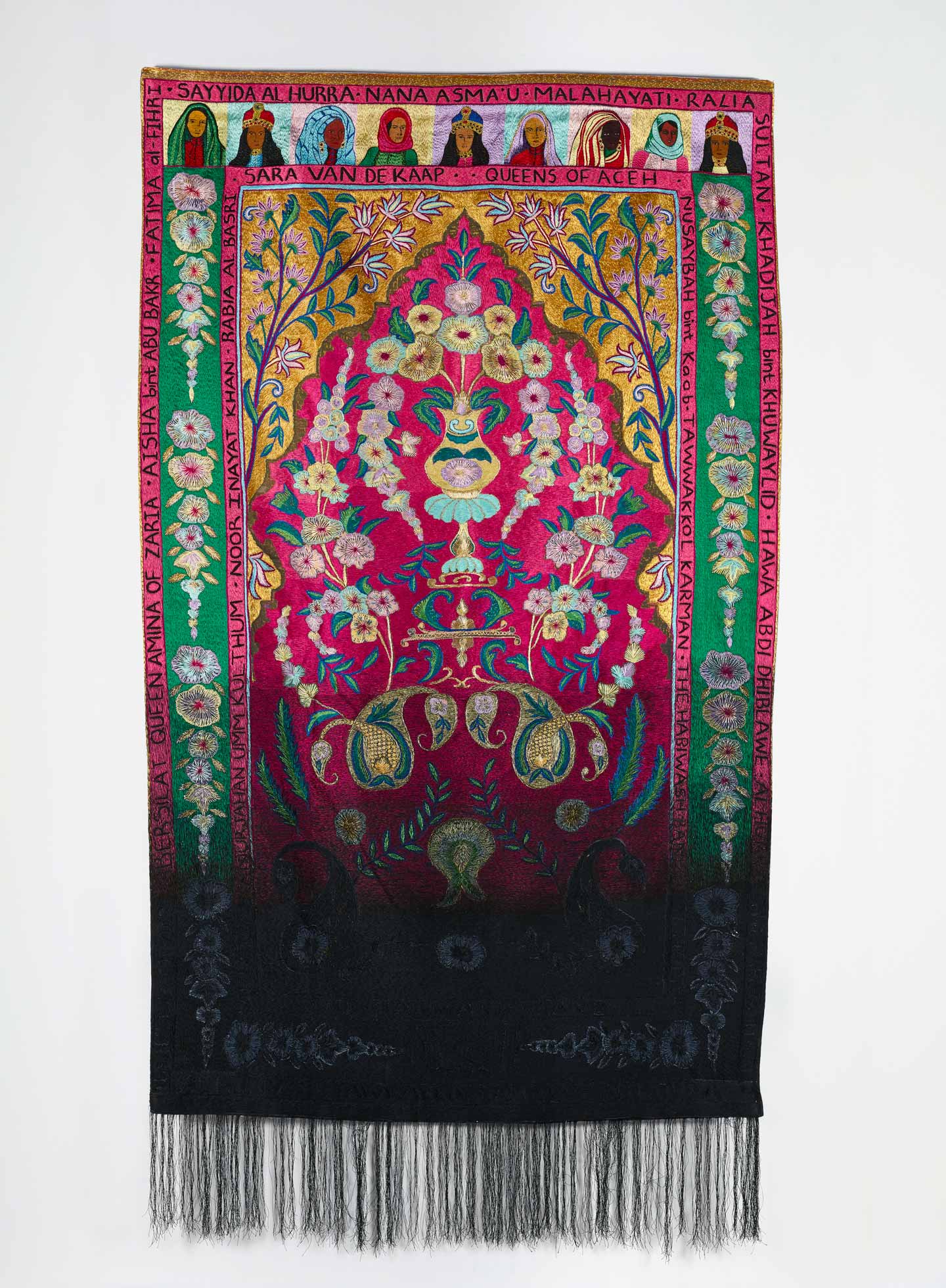 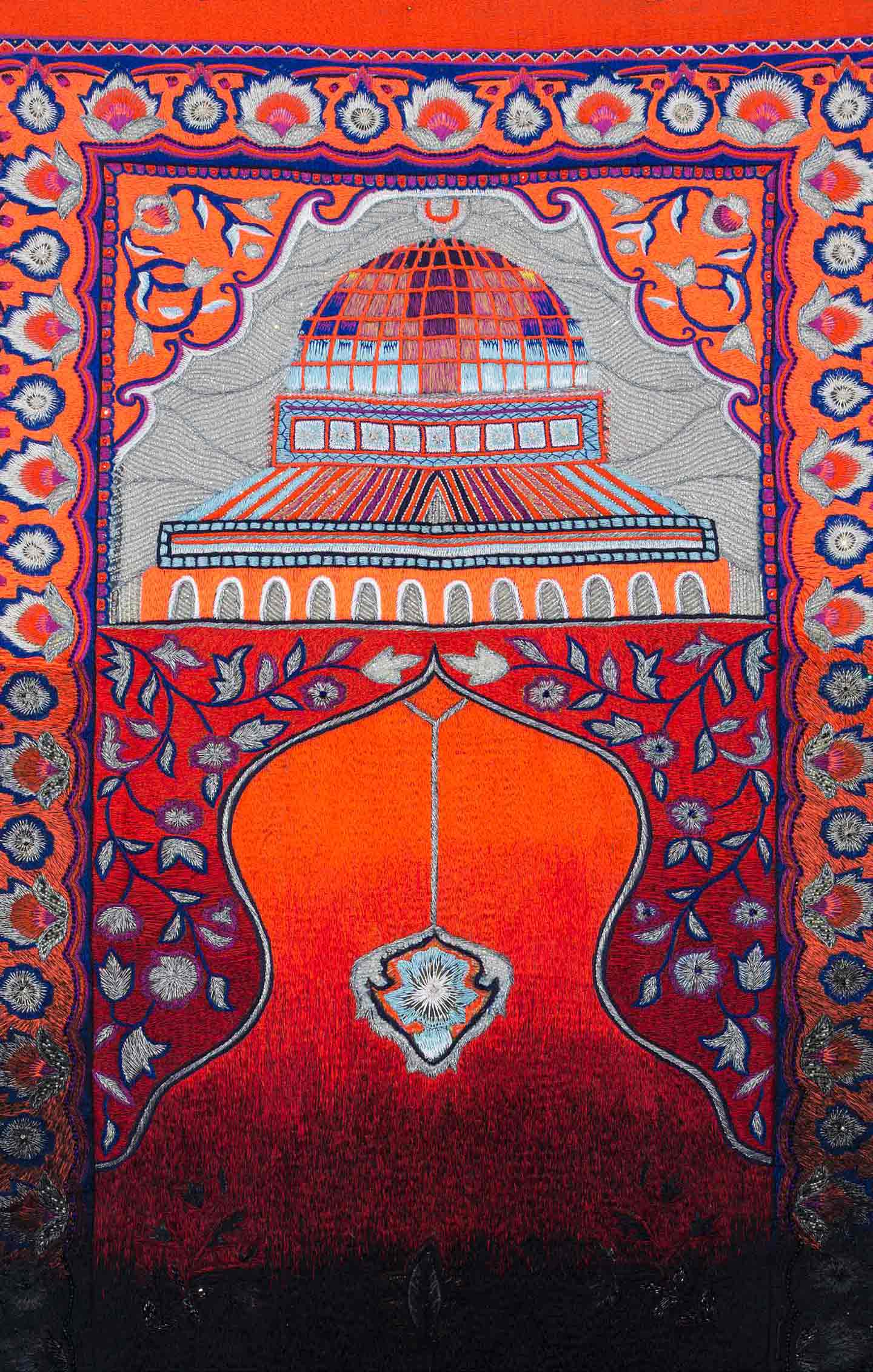 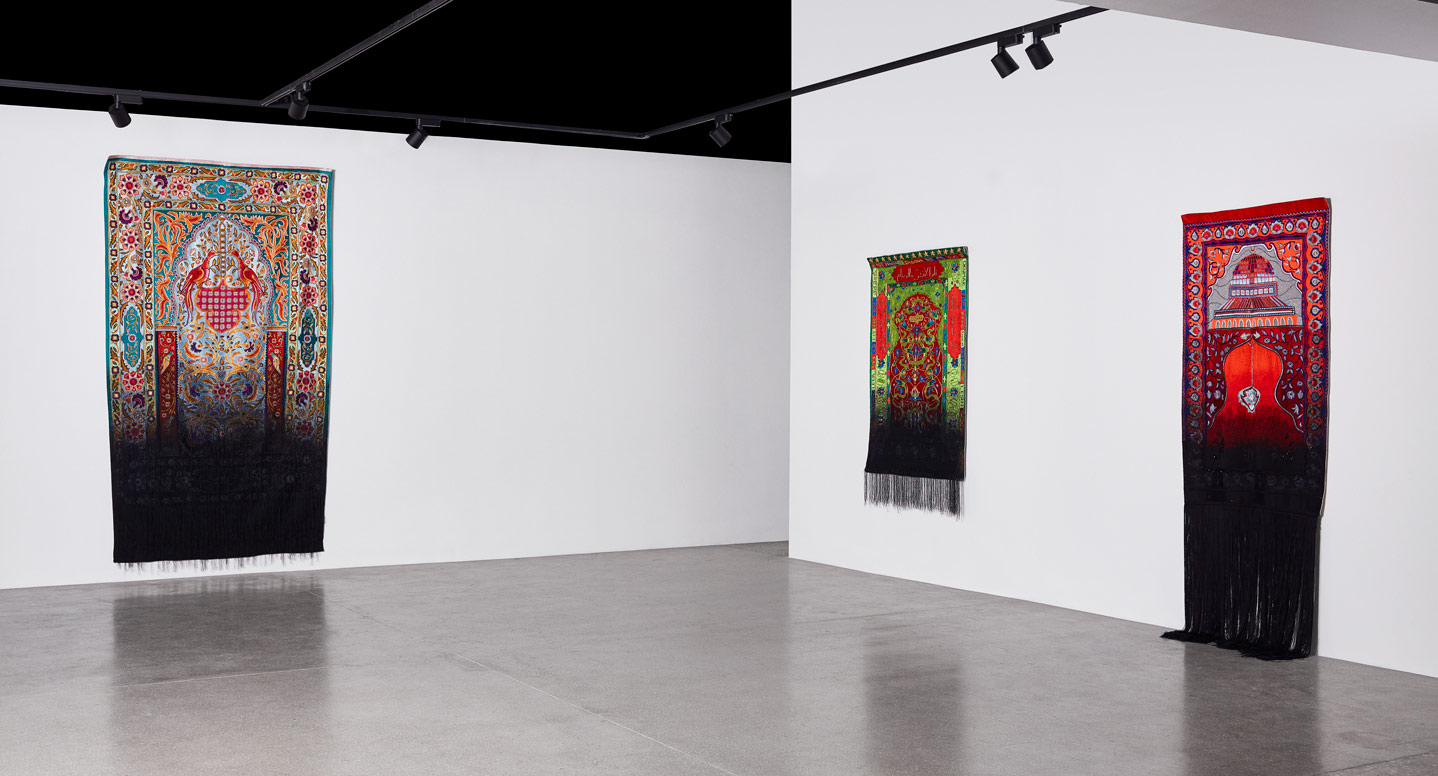 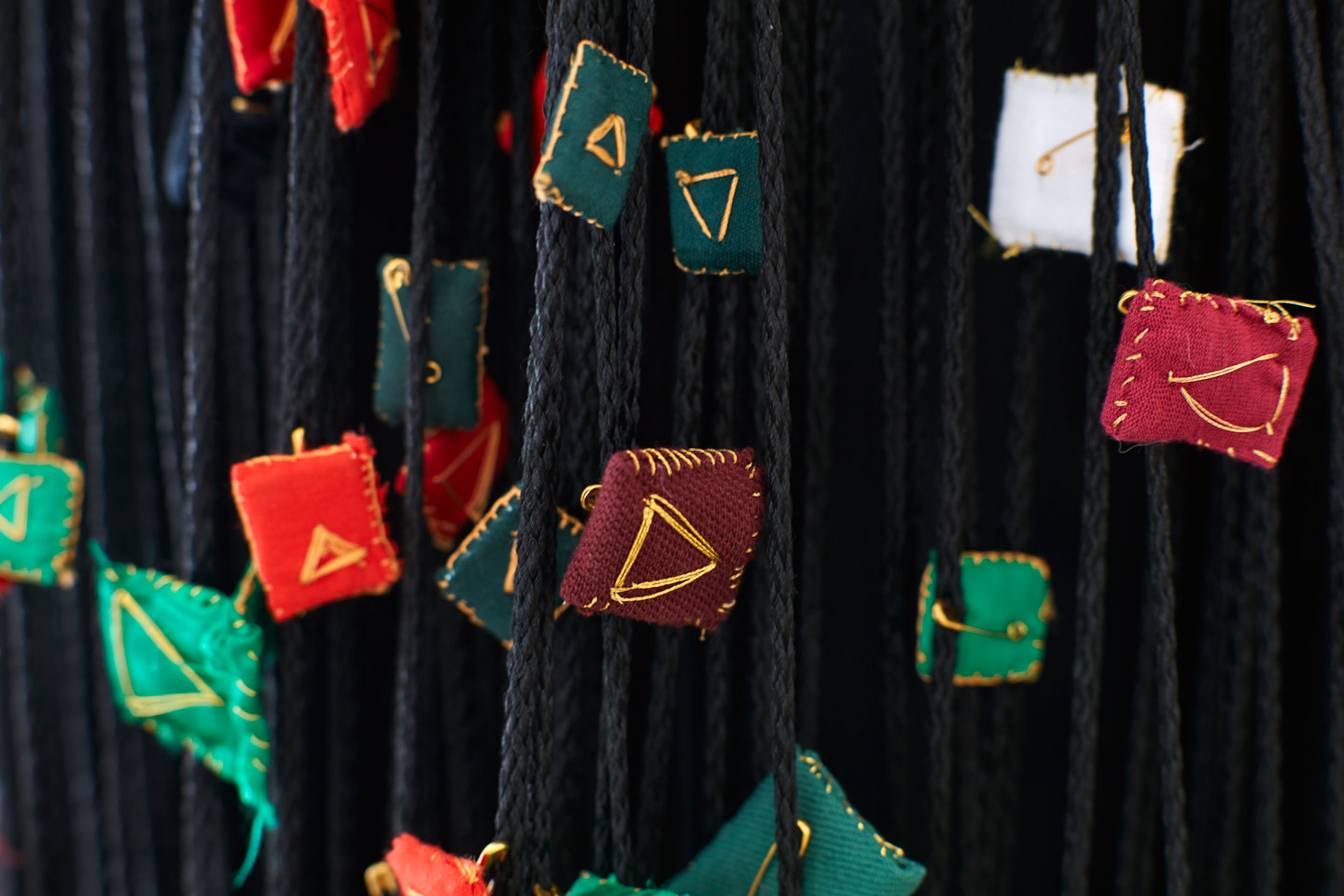 In Sentiment of What Comes and Goes II 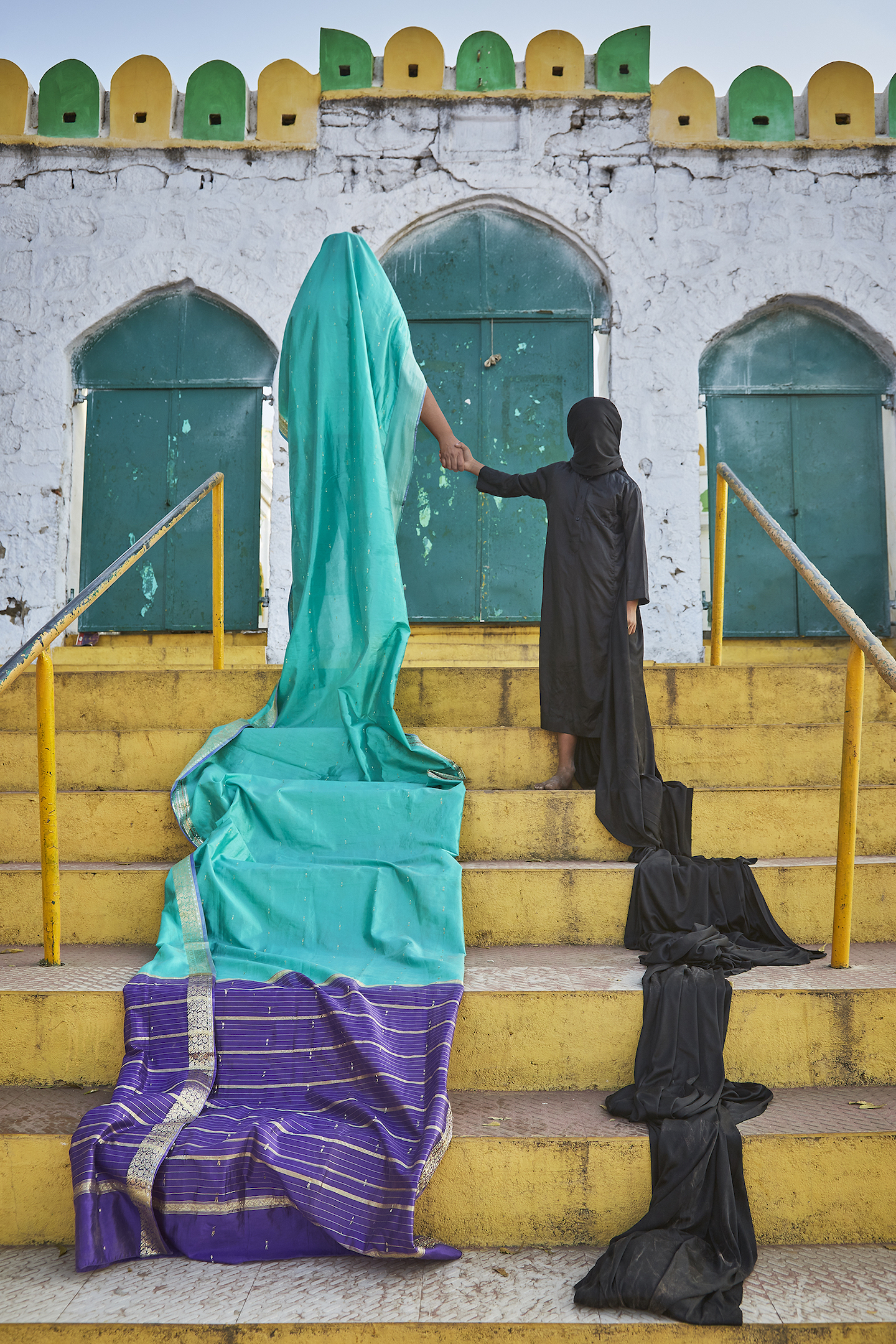 In Sentiment of What Comes and Goes I 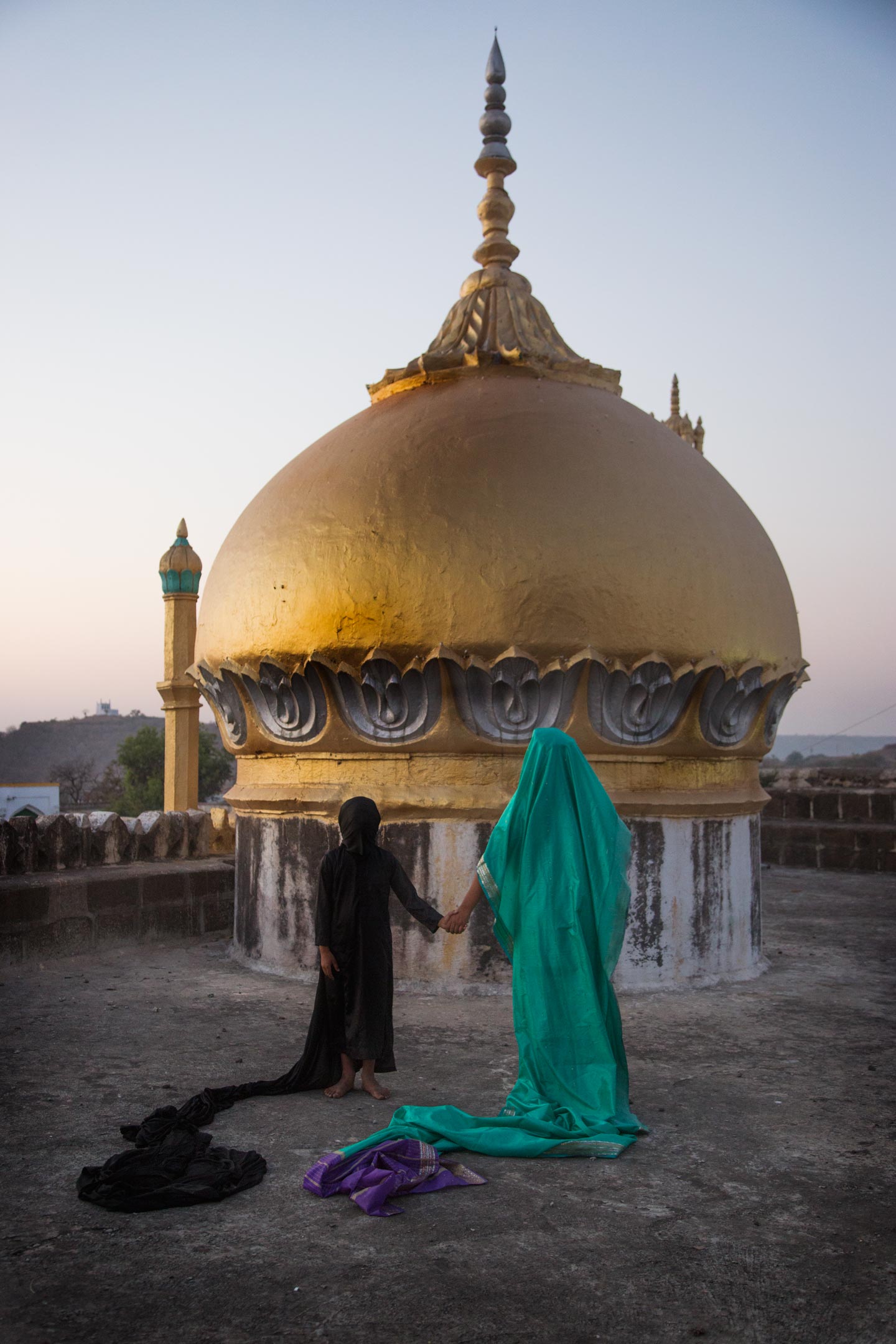 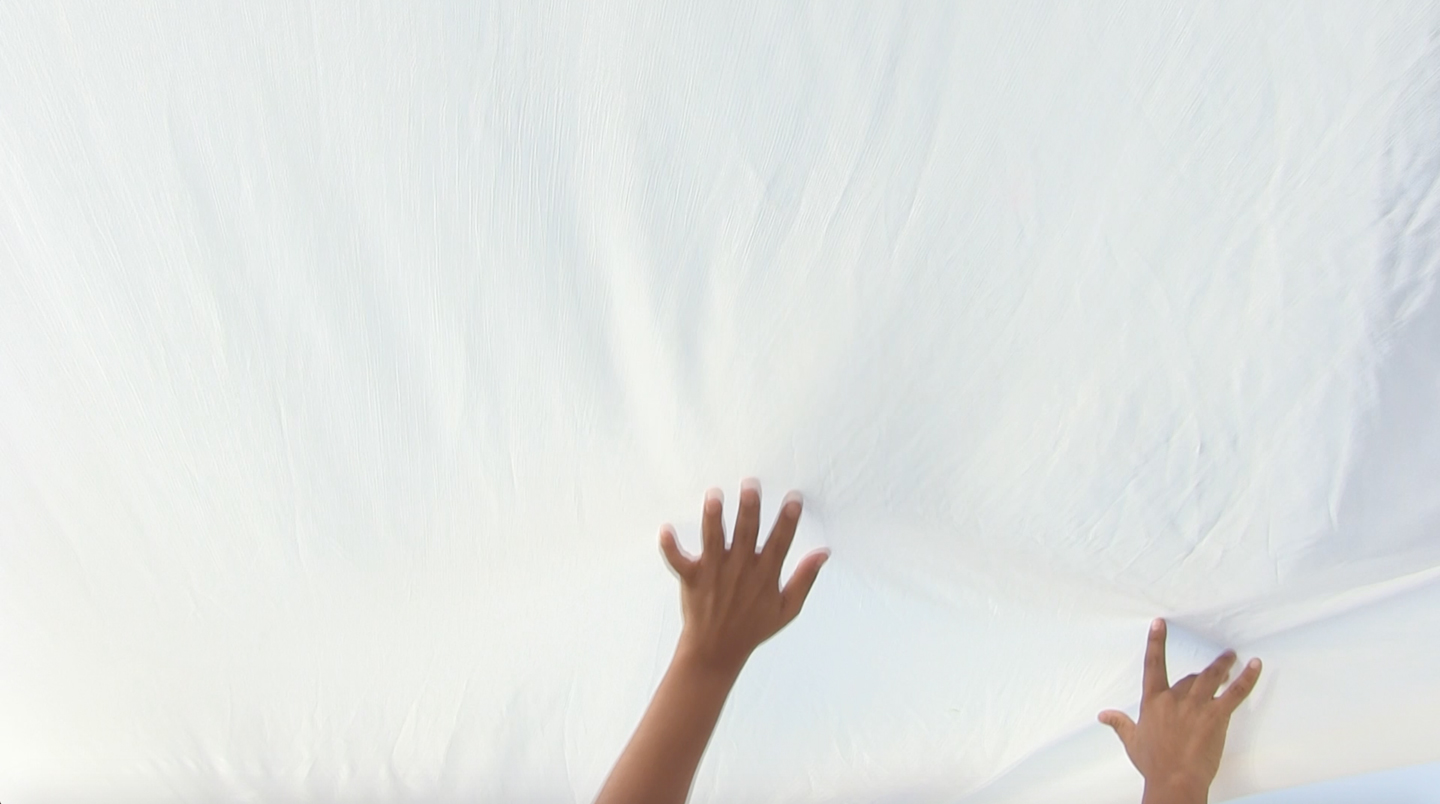 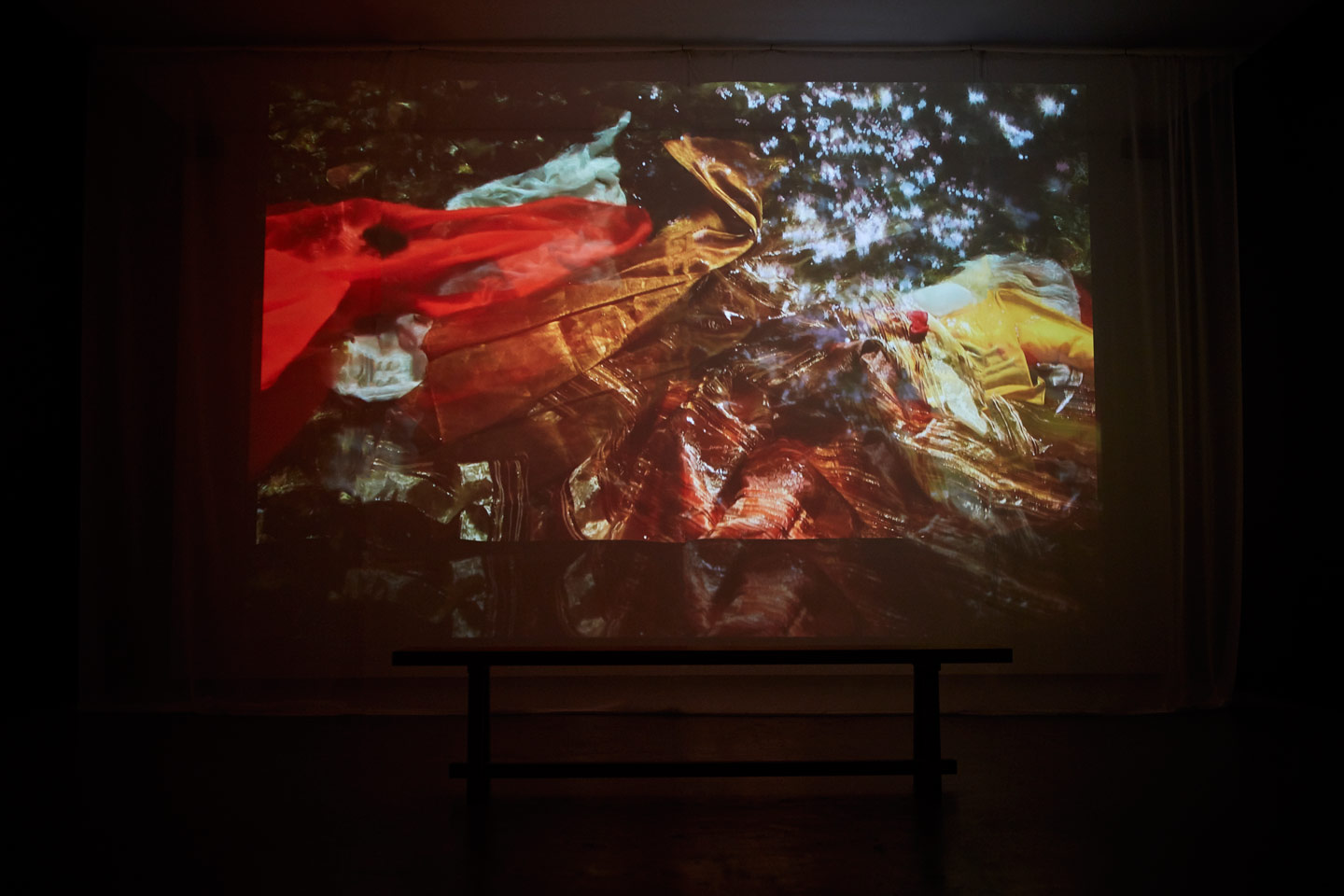 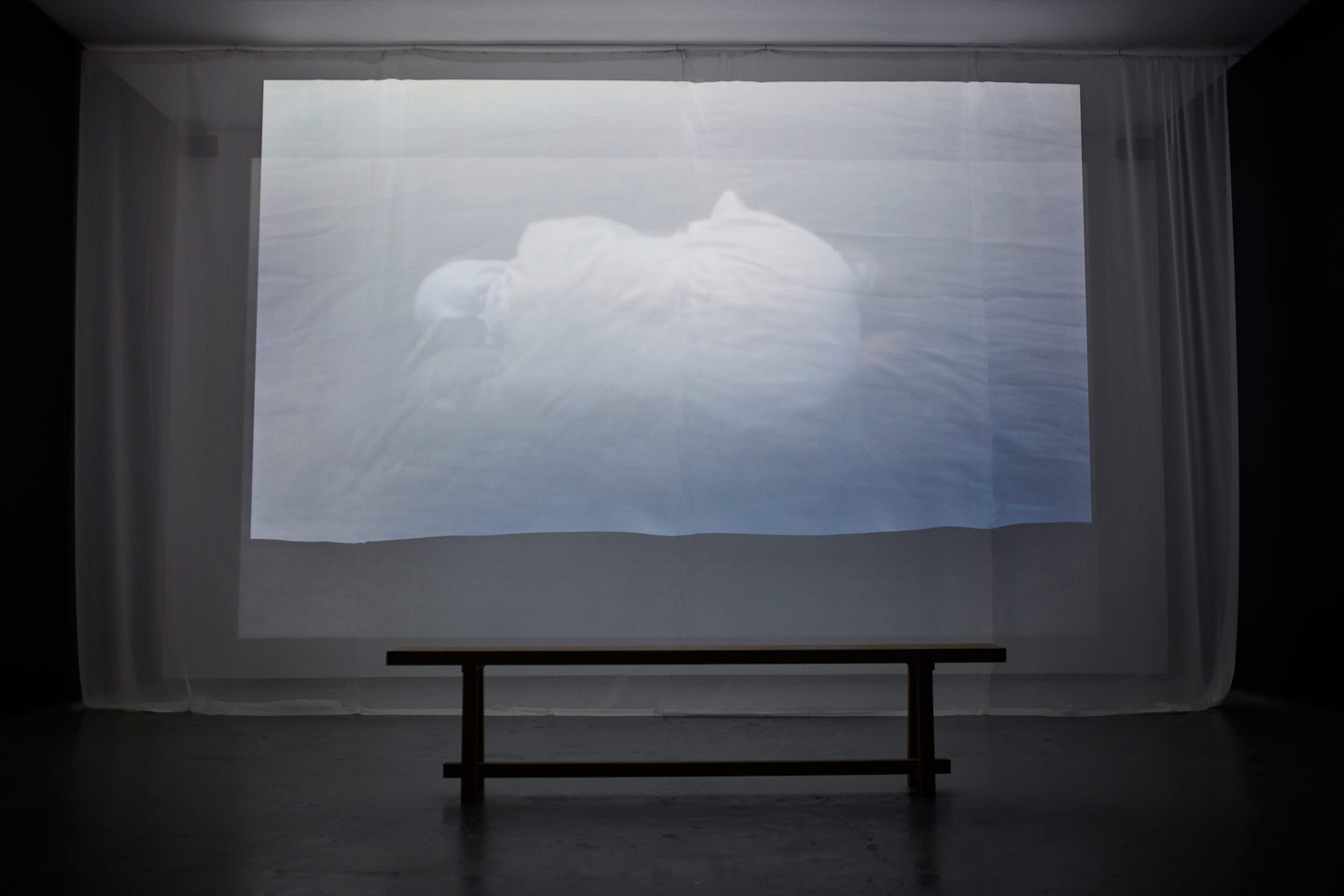 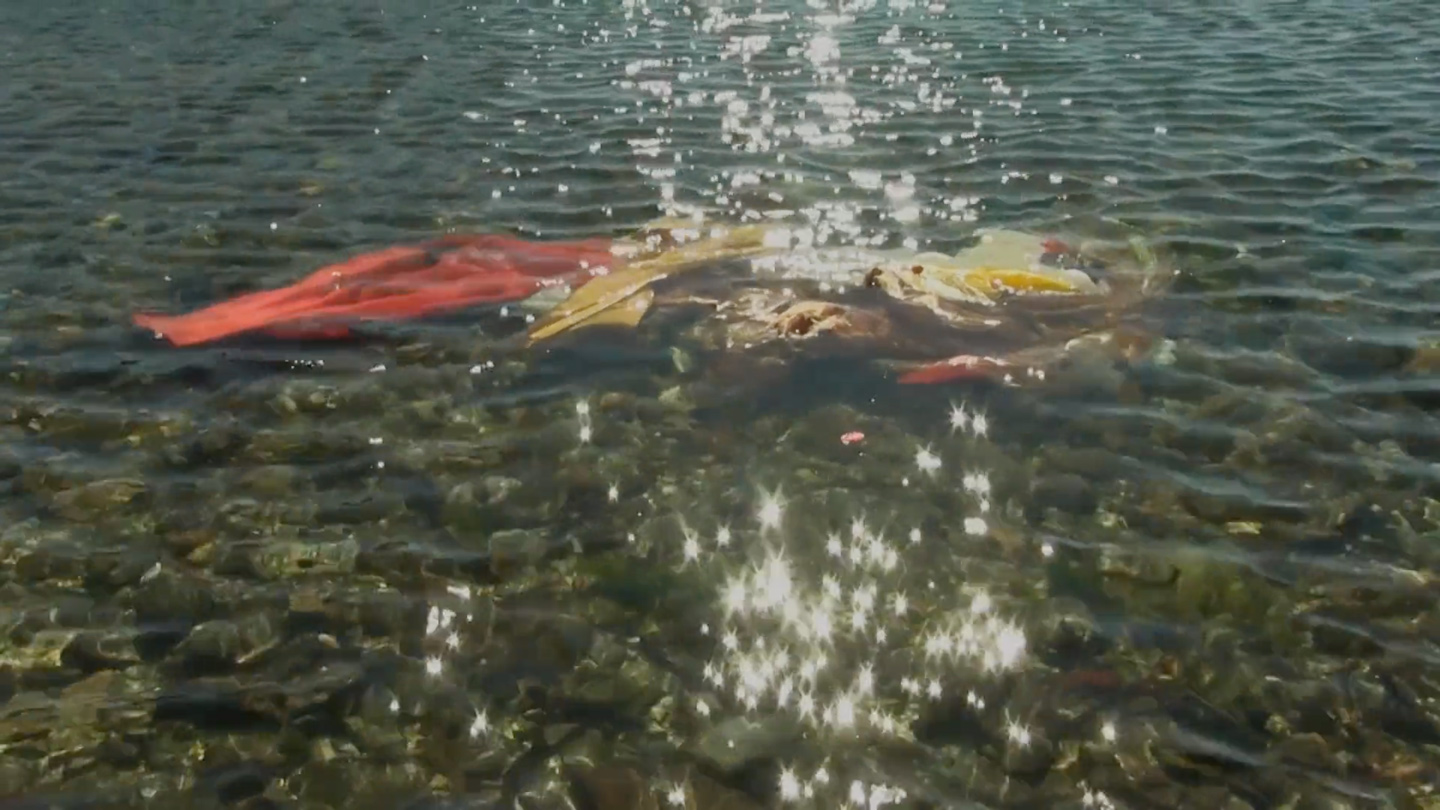 Where should we go after the last frontier?

Where should the birds fly after the last sky?

Where should the plants sleep after the last breath of air?

These words, by the Palestinian poet Mahmoud Darwish, assume an unnerving force as I listen to Thania Petersen. She is speaking of the heavens in turmoil, of the plunge of grace, and, along with ‘a falling sky’, ‘the rise of religious fundamentalism and extremism around the world’. Stateless, forever exiled, Palestine is the exemplary tragic victim of a world as divisive as it is graceless. In Mahmoud Darwish’s words, such a systemically cruel world has ensured and earth sucked of all oxygen, voided of any free-flowing access – a world become apocalyptic, in which nothing good will ever sustain itself after the last sky.

It is against such a starkly hopeless world that Petersen stages her latest work. Titled ‘Iqraa’, it opens with a dramatic installation made of black thread connected to thousands of ‘talismans’ that contain the life-affirming mantras of the world’s religions. A deluge of secreted hopes, the impact of Petersen’s installation is impossible to ignore. It is as though the artist is telling us that she will not succumb to the mirthless brutality which, increasingly, has come to define what we know as ‘fundamentalism’. This is because, for Petersen, we are witnessing a grotesque miscarriage of faith whose menacing rise attests to the destruction of all which connects the great religions and which has engendered their enabling differences. For today we confront the suppression of their shared principles, a pitting of one religion against the other.

‘Iqraa’ is the first word uttered by the angel Gabriel as he descends from a violated sky. Iqraa, in Arabic, means to ‘read’, and it is this governing impulse which informs Petersen’s solo show. We must ‘learn to read’, she says, we must interpret the world in a more beneficent and inclusive manner, because if we do not do so we will remain the slaves and victims of religious dogma. At the heart of this wager is the artist’s fear of the threat posed by Wahabism – a politically fuelled distortion of Islam in which love and grace – the foundation of the world’s great religions – is betrayed in the name of a nihilistic absolutism. For it is Wahabism which is the viral locus of the extremist Islamic movement – the Jihadists – for whom there is no God other than a vengeful and cruel one.

This God – the God of Wahabism – is clothed in black. It is a God whose absolutism has transformed its followers into a death cult. What deeply concerns Petersen is the damage this cult has wreaked – the intolerance and hate it enshrines. Steeped in rancour, outrage, and hysterical excess, it is a cult which has unerringly sought control and shape the world’s understanding of Islam with catastrophic consequences, for today it is well-nigh impossible to recognise Islam as a religion founded on love. It is, however, against this destructive and abusive distortion that Petersen has set up her counter-faith in which art can, once again, assume its sacred purpose. For hers is an art, contra Sarah Thornton, which is not some coolly contemporary ‘religion for atheists’, but art as an act of divination that seeks to reintegrate the now blasted and conflicted realms of religion and secularism.

The comparative rarity of this strategy deserves our attention. For if Petersen is wary of the destructive impact of religious fundamentalism, she is as wary of the illusion, trenchant within neo-liberalism, that in this modern era we are somehow exempt from belief. Indeed, after Alain de Botton and John Armstrong, Petersen has unerringly recognised that the root error of secularism lies in ‘an absence of hope’ – which is why, all the more, we need to ‘preserve our hopeful dispositions’. In choosing the Muslim prayer mat as her foundation, as the shaping form of her works, Petersen has chosen to remind us of the power of ritual, of daily prayer, without which it becomes difficult if not impossible to sustain any hope. Her artworks, therefore, are not merely things which we affix to walls but talismanic tropes for a continuing and abiding faith-in-life.

It is this intrinsic and structural complex – faith-in-life– which explains the purpose and necessity for Petersen’s exhibition. She does not seek to convert others to Islam but asks us to urgently rethink its misappropriation and misrepresentation. If her works possess a political stridency, it is because they challenge the aberrant religious and cultural practices which emerged after the colonisation of the Arab world, an aberration which we, in South Africa, are well aware of, because it has become toxically apparent that those who seek to right a wrong – who seek to counter oppression – often find themselves darkly repeating and distorting the very abuses they sought to overcome.

Decolonisation, therefore, is not perforce the sanctified answer to colonisation. What is lost – and what Petersen places at the epicentre of her exhibition – is the value of a faith that preceded imperial abuse. In this regard, Wahabism is a toxic case in point, a ‘fantastical farce’ says Petersen. In aligning an extremist Arab-centred nationalism with an extremist expression of faith, Wahabism permitted the ruthless damnation of all those who refused to adhere to its new-fangled laws. The root of the problem of Wahabism, indeed of all extremist movements, is its ‘adherence to absolutes and the dream of purity’. Petersen’s observation is telling, for it is precisely her refusal of purity and absolutism – her refusal of Wahabism’s dark essentialism – which emerges as the works’ pivotal tipping point. Her textiles – her defining medium – is one which, in embracing East Africa, Southeast Asia, the Indian subcontinent, and the Arab world, is a reminder that faith is mobile, and that no nation-state and no systemic ideology can ever contain or wholly define it.

It is therefore the fluidity of faith, its openness and generosity rather than its oppressive and isolationist stance which, for the artist, proves critical. If, through a particular use of textiles, one ‘records one’s cultural history and identity’, this is because this construction, always mobile, supposes some a priori heterogeneity. At the heart of the essential, therefore, resides the multiple or multifaceted expression of belief. No dogma, therefore, can wholly define a religion. And it is interesting in this regard to reflect, as Petersen does, on the striking shift in culture, in look, of the faithful on returning from Hadj. ‘Two generations ago, believers returning to Cape Town from Mecca were clad in a glittering celebratory splendour’, now, however, believers are clothed in black, the defining colour of Wahabism, and a clear sign, for Petersen, that ‘ideology has infiltrated our sacred spaces’.

Petersen’s prayer mats are the vehicles in-and-through which she considers this lethal infiltration. What is most distinctive therein is ‘the way in which black thread seeps into a colourful landscape’. This infiltration of a malevolent night is the way a nihilistic phalange of Islam has assumed dominance, which, for the artist, is also none other than the ‘Arabisation’ of post-colonial communities. It is against this Arabisation that Petersen has given us ‘Iqraa’, for hers is a counter-cultural and counter-intellectual reading of a world which, dangerously and mistakenly, has chosen to misread Islam as the voice of Wahabism. For Petersen this misreading is by no means accidental or innocent. On the contrary, given the rise of fundamentalism everywhere in the world it has proved convenient, and tactical, to diminish Islam’s pluralistic complexity.

It is not surprising, therefore, that Petersen – an artist drenched in colour and driven by a vivacious joy – should speak again and again of love, of grace, charity and compassion. Well aware that her faith is under attack both within and without, she has chosen to foreground its graces and that which threatens it. Hers, finally, is a faith that is ‘liberatory, flexible, fluid’, a faith on the move which at every point in its compromised gestation holds fast to its enabling and beneficent stillness and eternality. Battered by history, the artist stands unbowed and undeterred.  Recalling her forefather and progenitor, Tuan Guru, the Malay prince imprisoned on Robben Island in the 19thcentury, she tells me of his power to covert the enslaved class to Islam, of how he would ‘hand out talismans to fellow prisoners’ the better to restore the power of faith in an appalling hour.

Ours today is also such an appalling hour, a time of darkness, engulfed by bitterness and recrimination, vitriol and bile, by an unchecked and dangerously anarchistic lovelessness. As the black thread unerringly consumes the light that remains, Petersen, like her forefather Tuan Guru, has chosen to gift us with talismans which can bind and sustain us. It is through her too that the angel Gabriel might return to us and we, in turn, might choose to ‘read’ and reinterpret the world in a manner that is far more empathetic and loving. After all, what is left when the sky falls?

Click here to read the exhibition review on Mail & Guardian

Thania Petersen is a multi-disciplinary artist who uses photography, performance and installation to address the intricacies and complexities of her identity in contemporary South Africa.

Petersen’s reference points sit largely in Islam and in creating awareness about its religious, cultural and traditional practices. She attempts to unpack contemporary trends of Islamophobia through her analysis of the continuing impact of colonialism, European and American imperialism, and the increasing influence of right-wing ideologies.

Threads in her work include the history of colonialist imperialism in Africa, Asia and the Middle East, as well as the social and cultural impact of westernised consumer culture. Her work is also informed by her Cape Malay heritage, and the practice of Sufi Islamic religious ceremonies.

Petersen studied at Central Saint Martin’s College of Art in London. She has held two solo exhibitions in 2016 at the AVA, Cape Town and in 2017 at the Everad Read Gallery, Cape Town. She has participated in numerous group exhibitions both locally and abroad. Upcoming exhibitions include Present Passing at the Osage Foundation in Hong Kong.