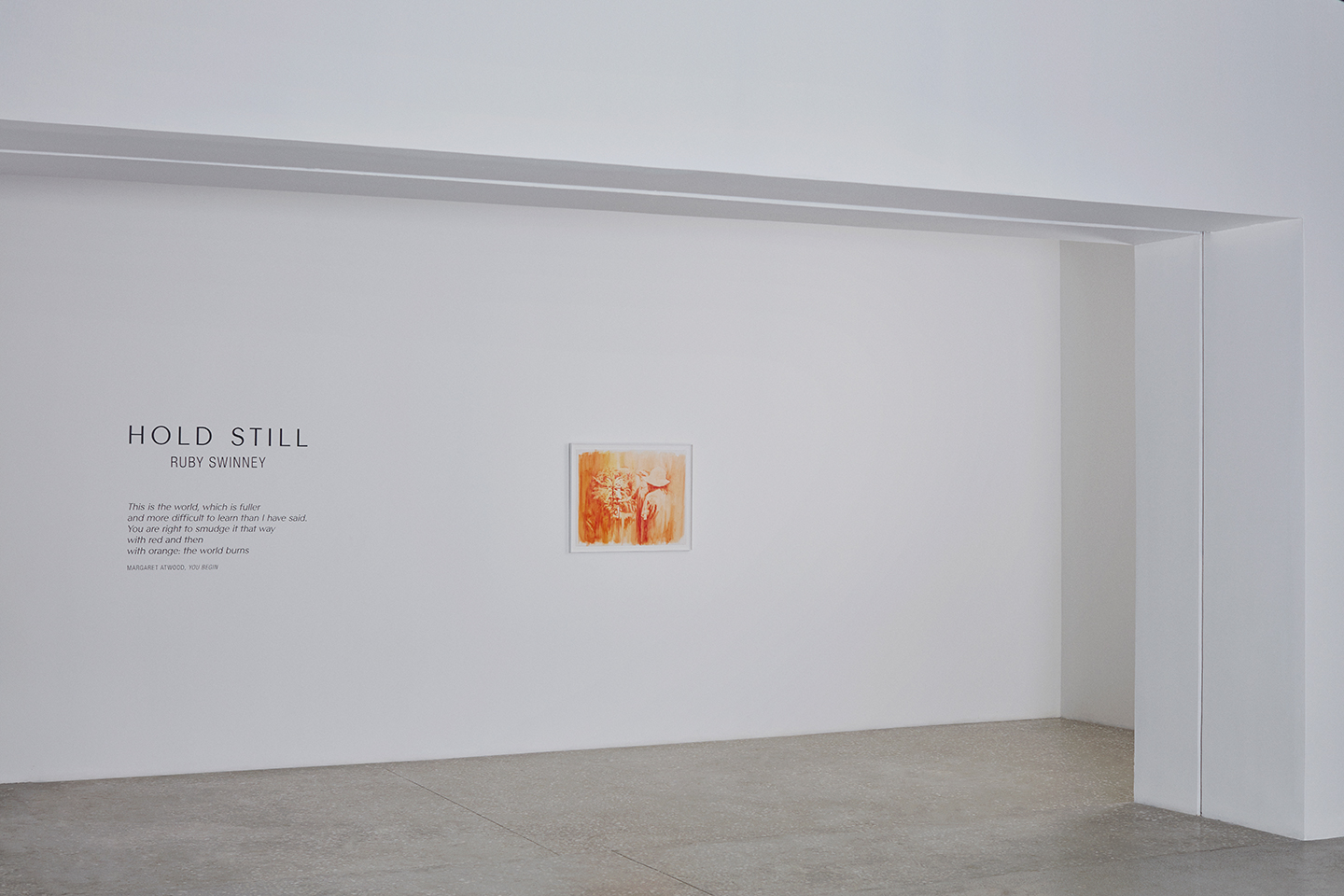 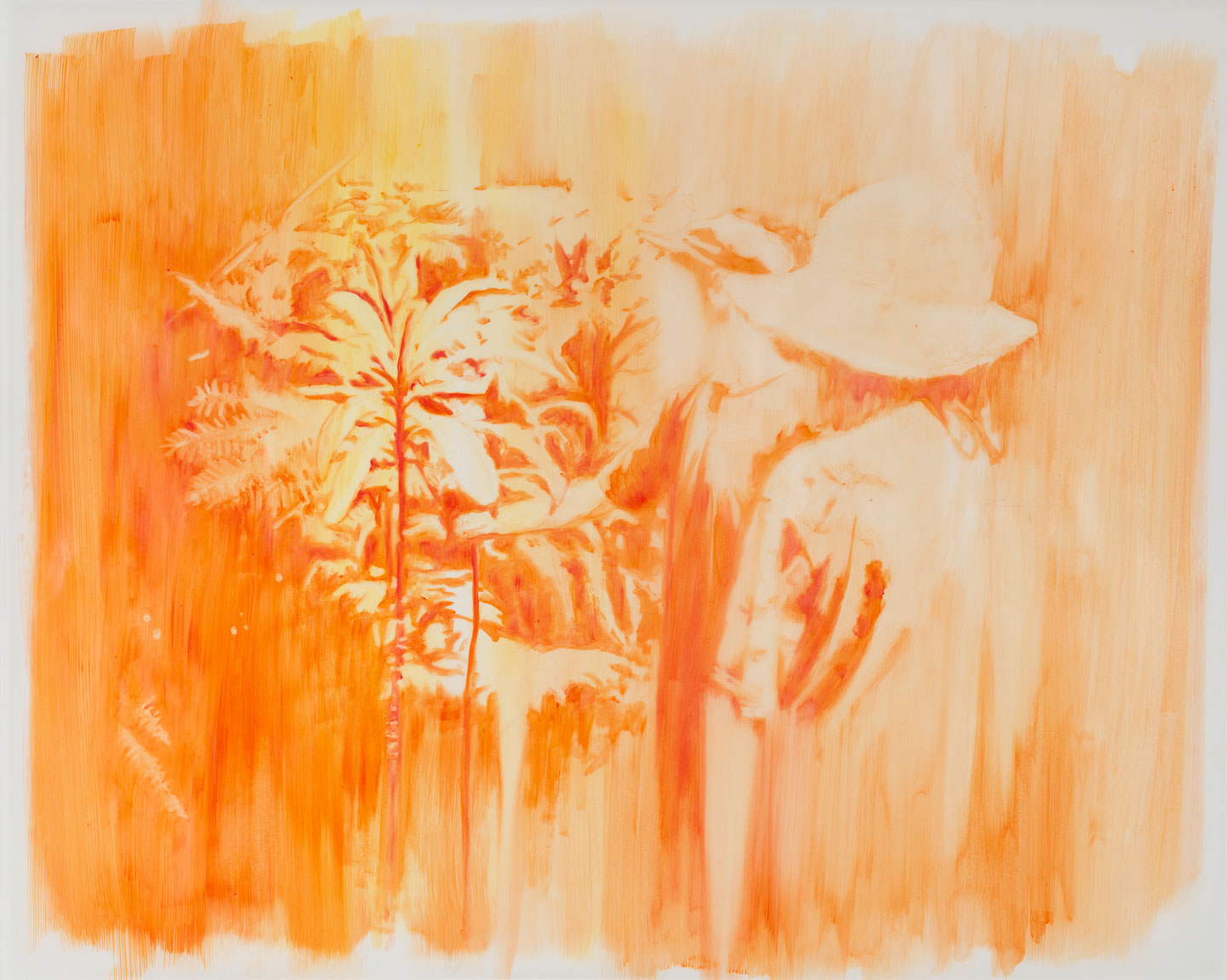 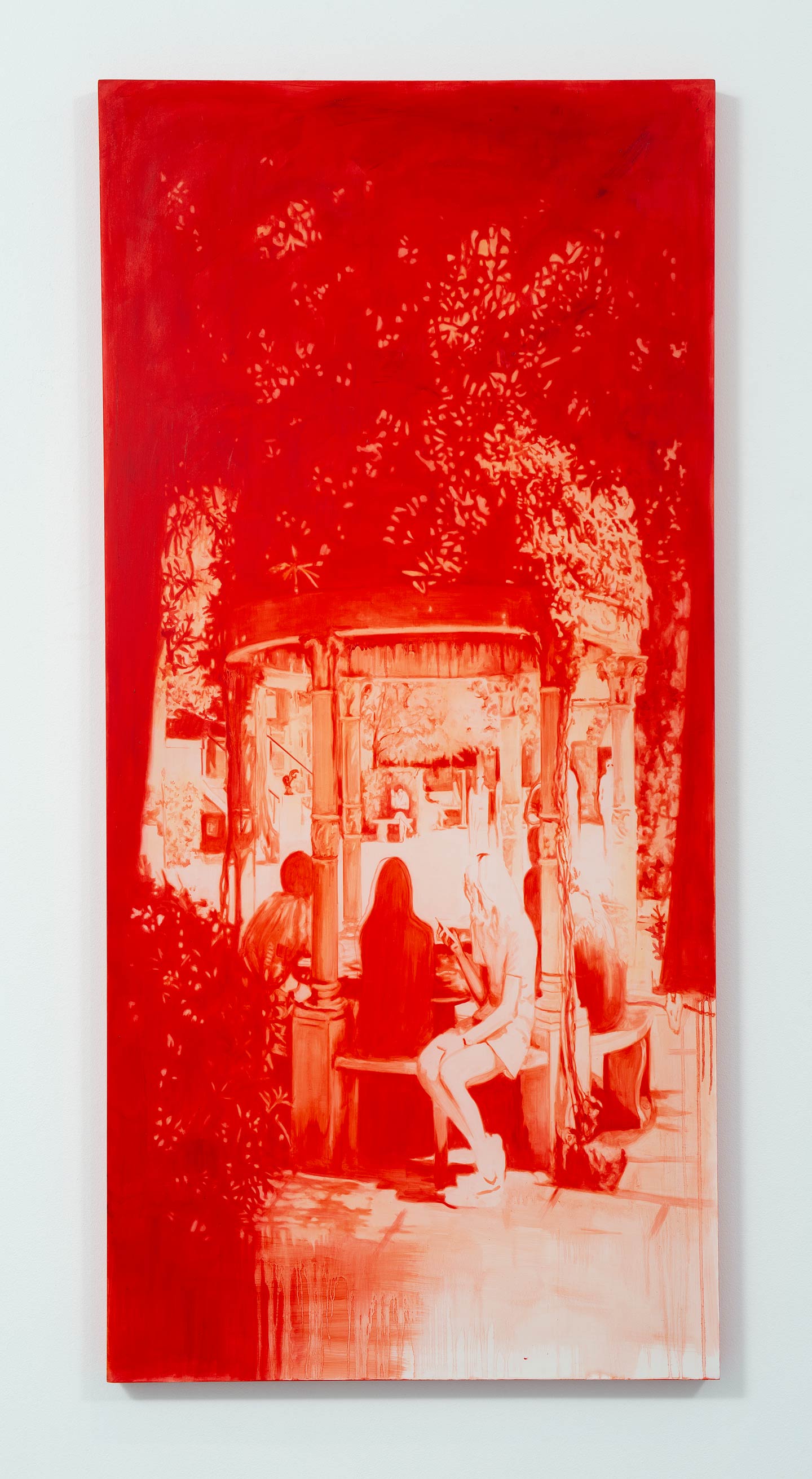 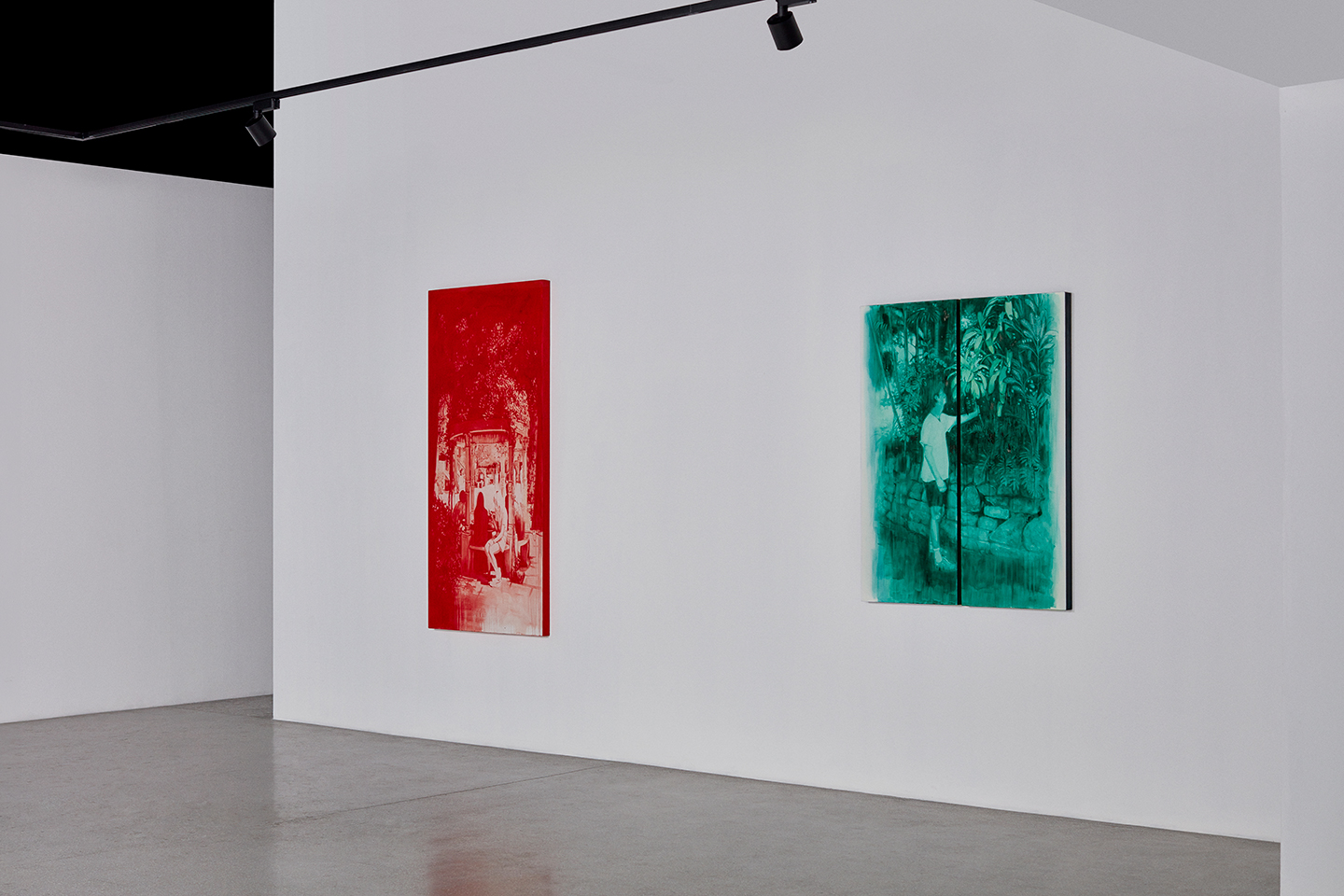 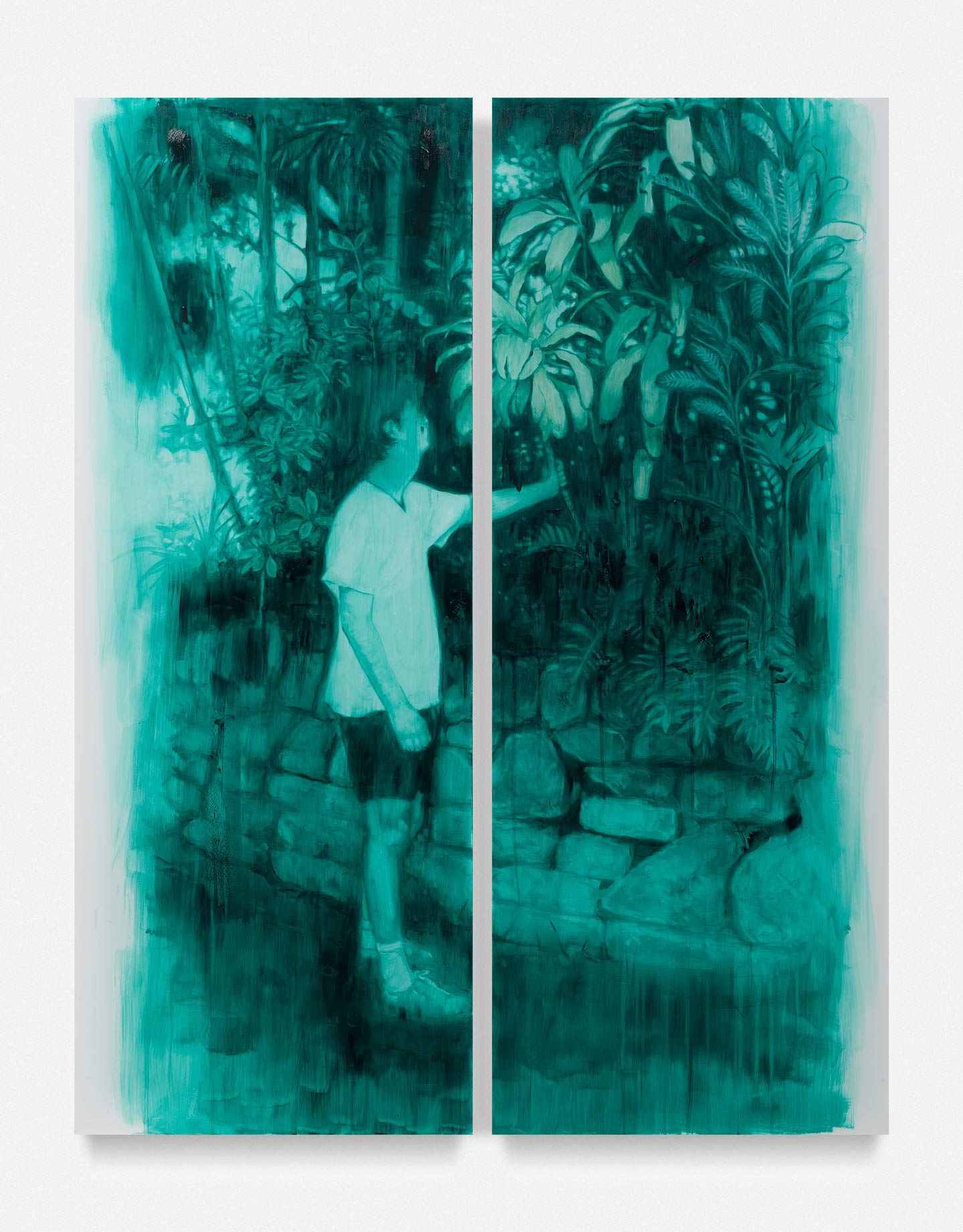 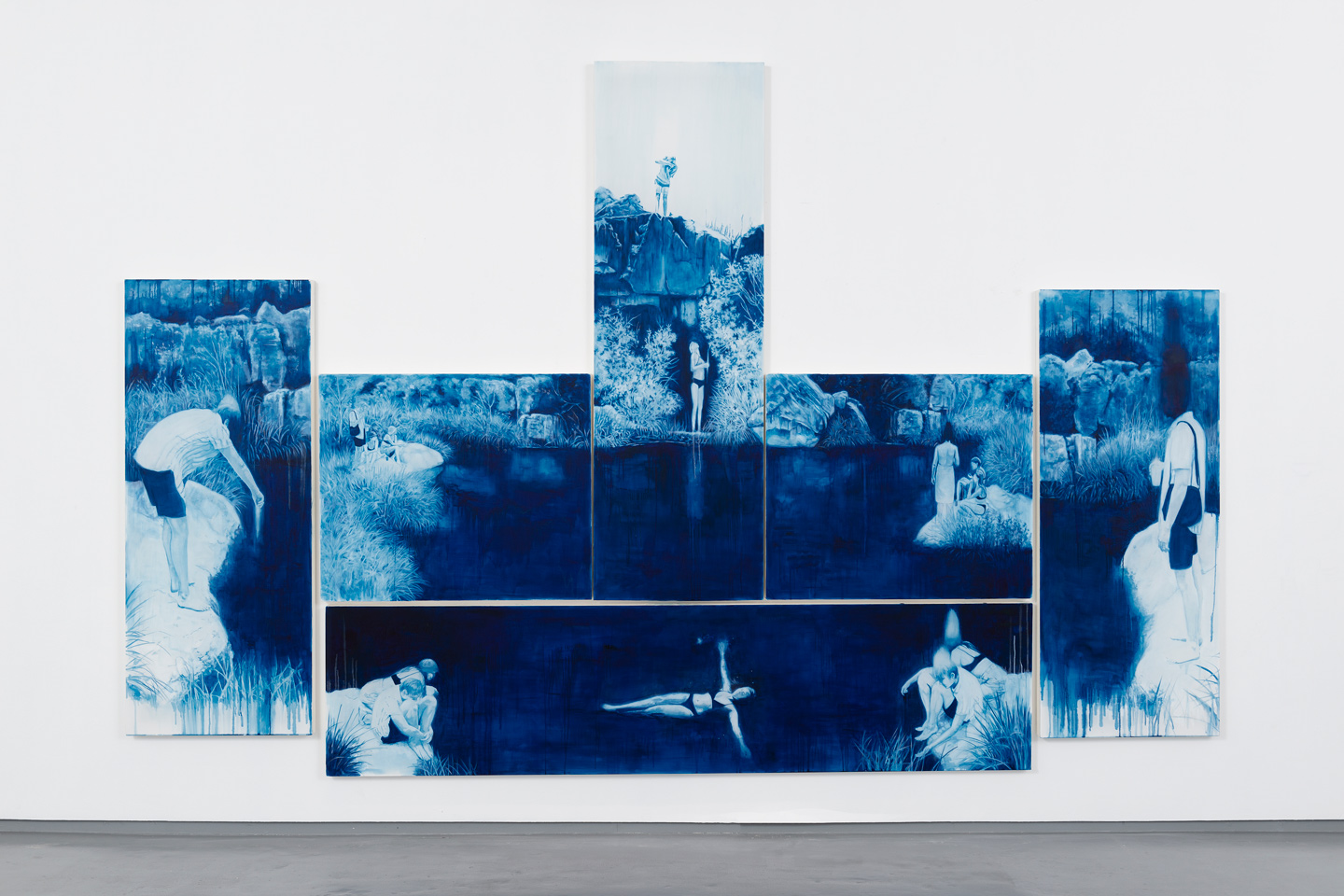 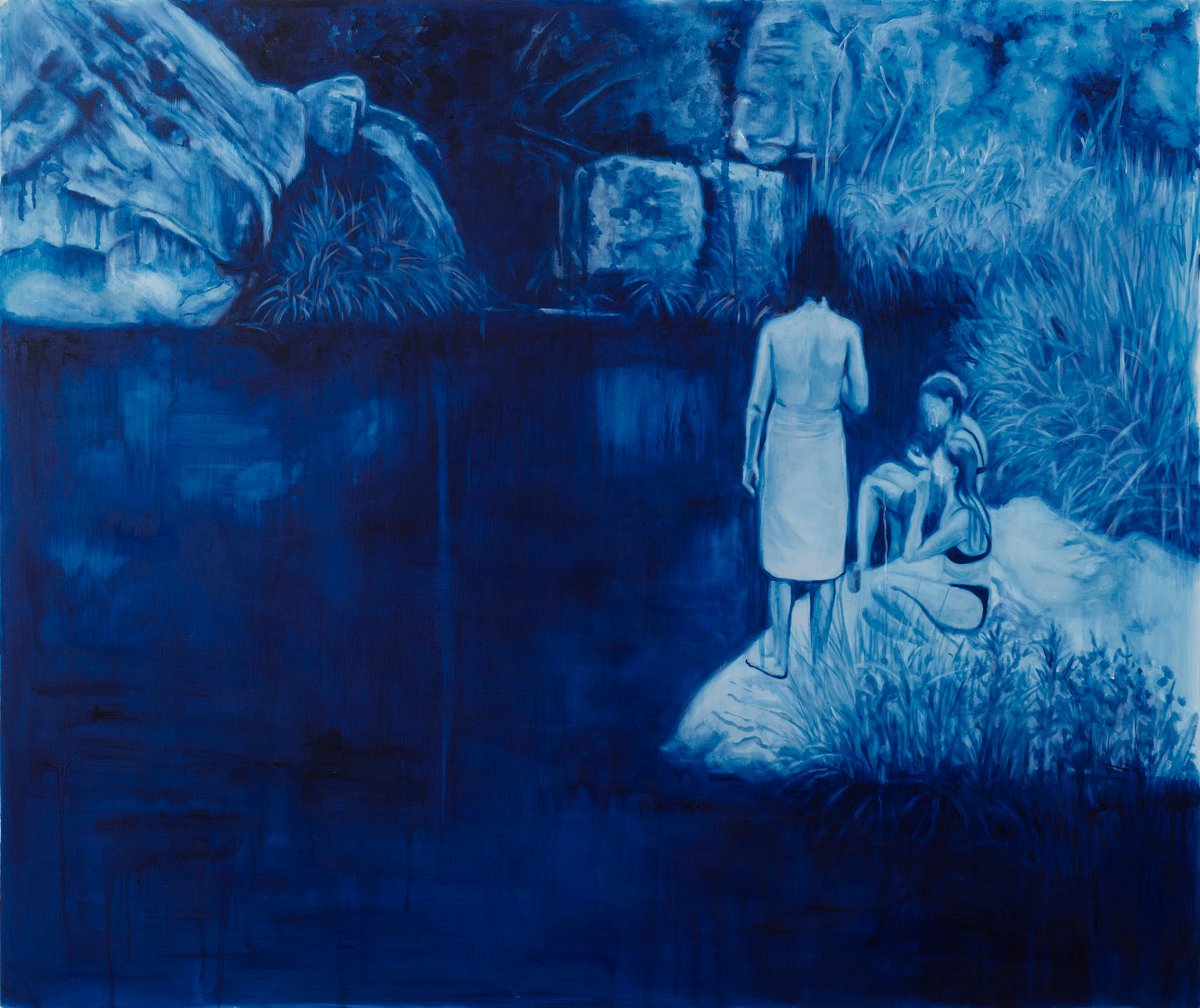 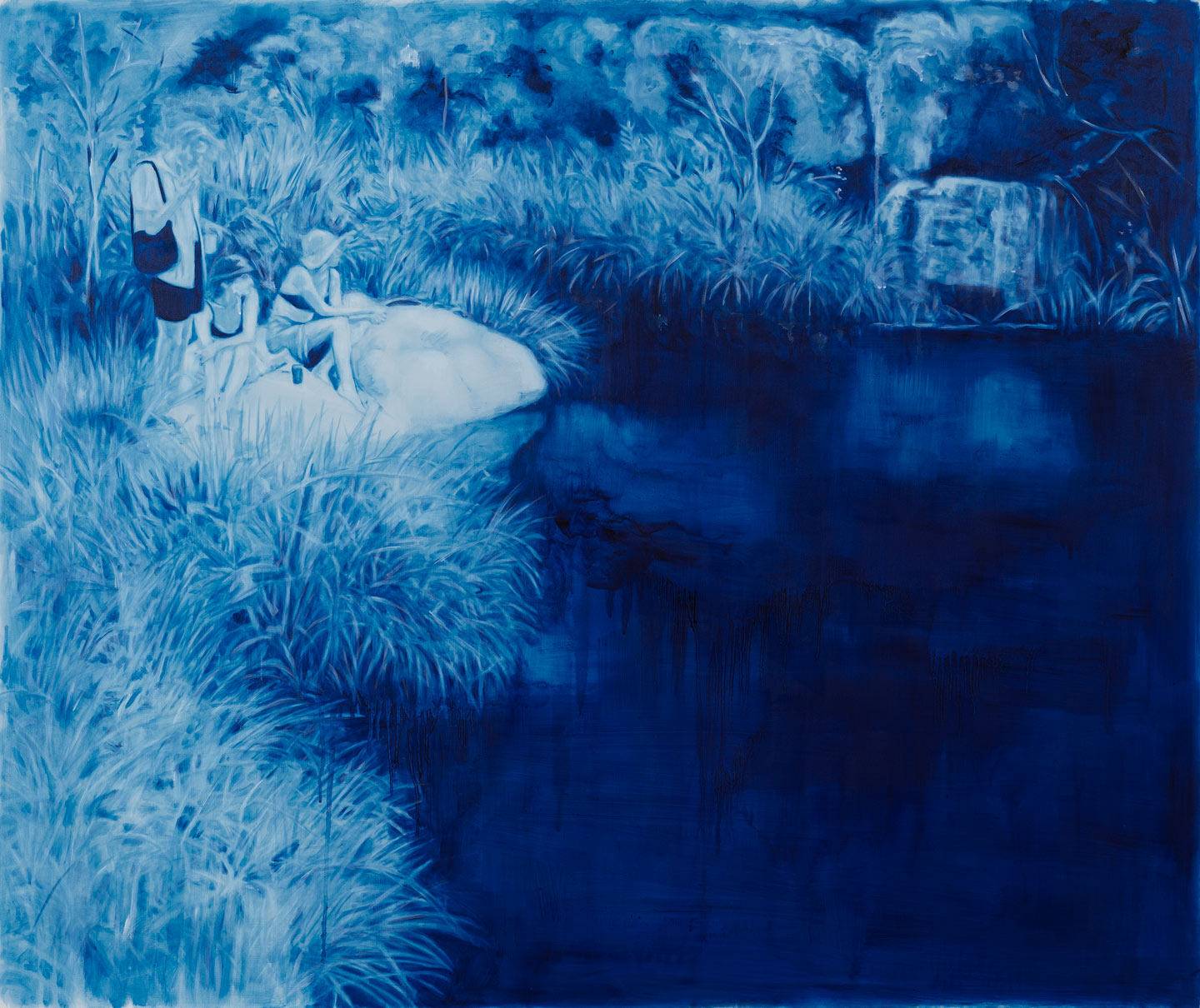 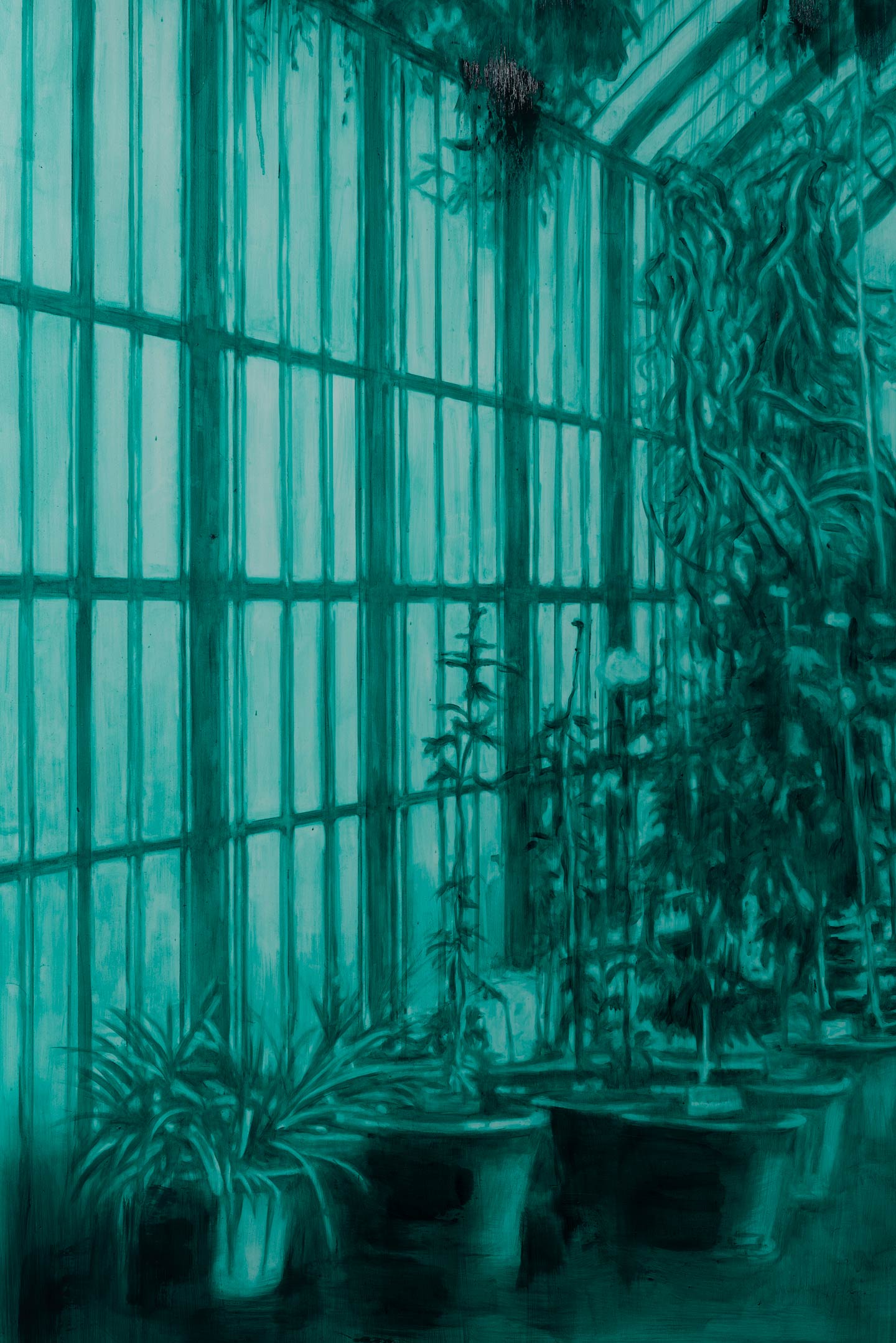 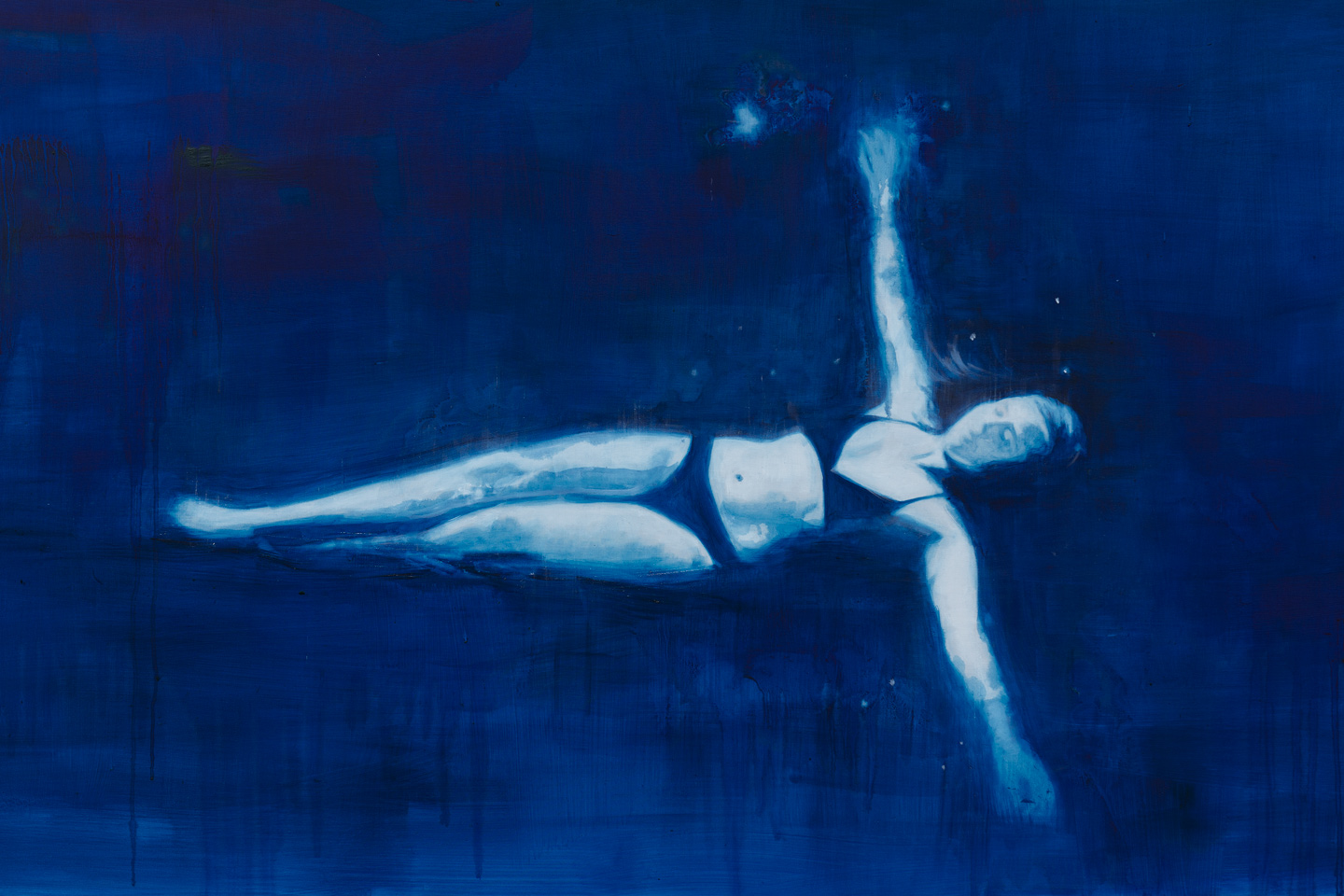 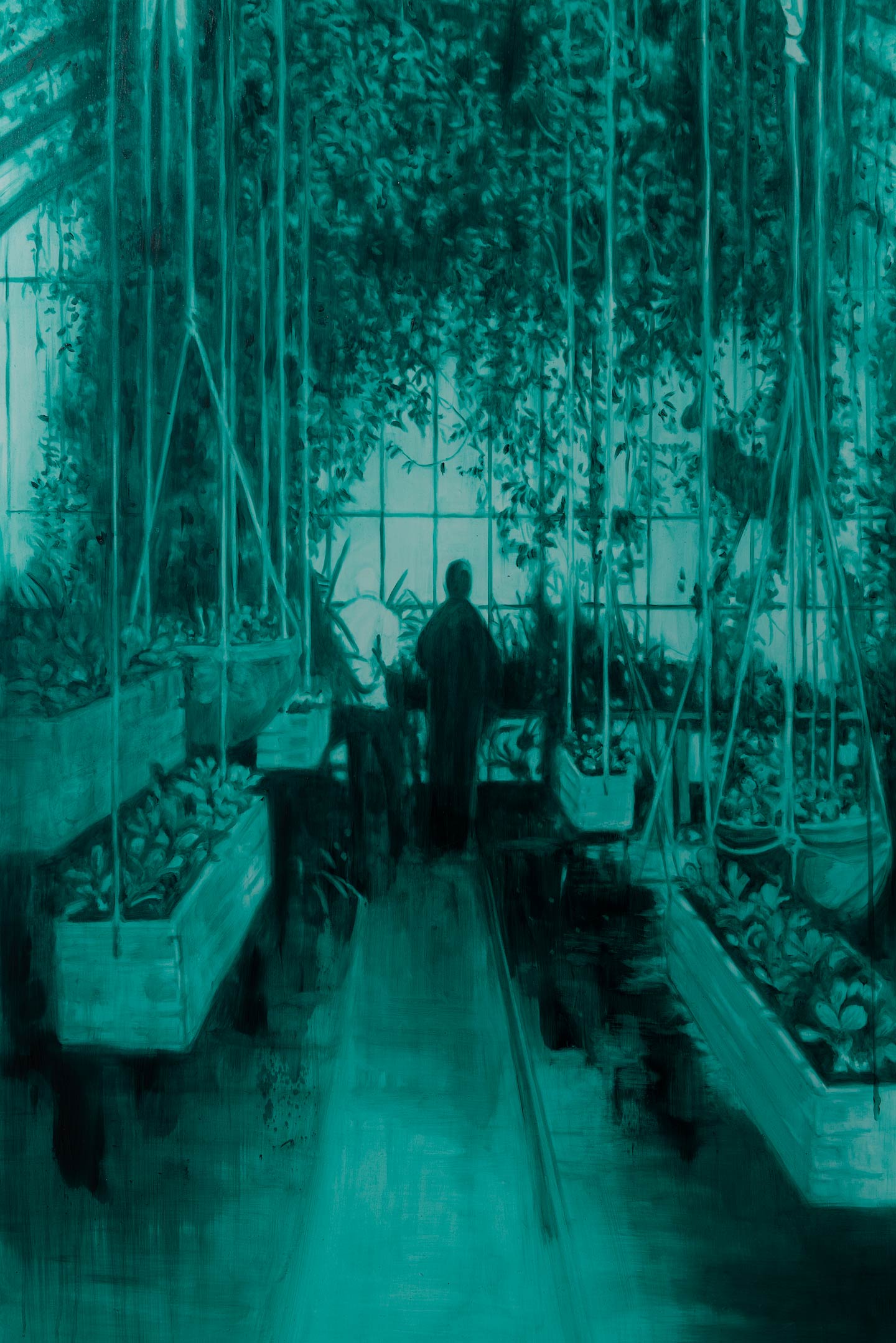 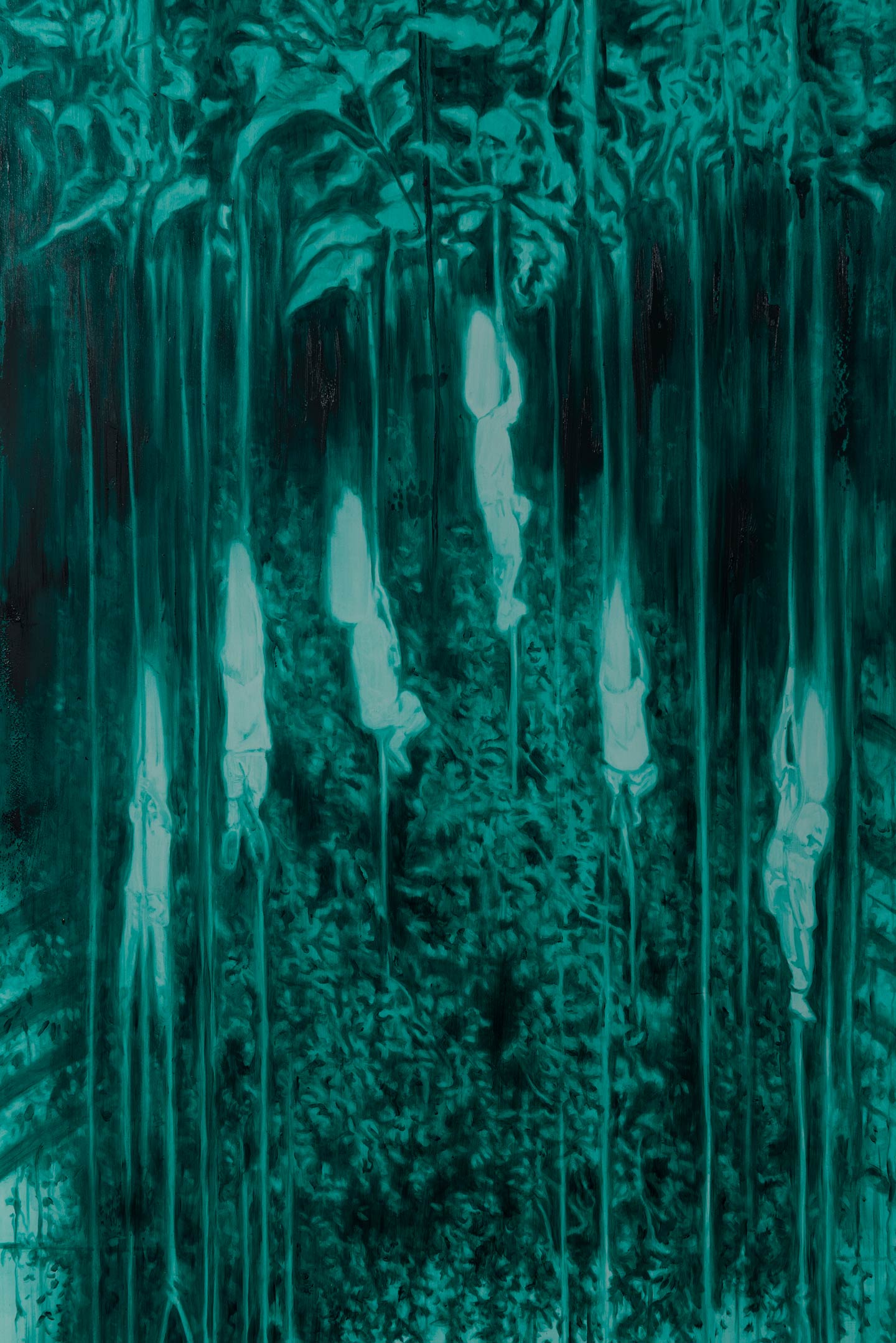 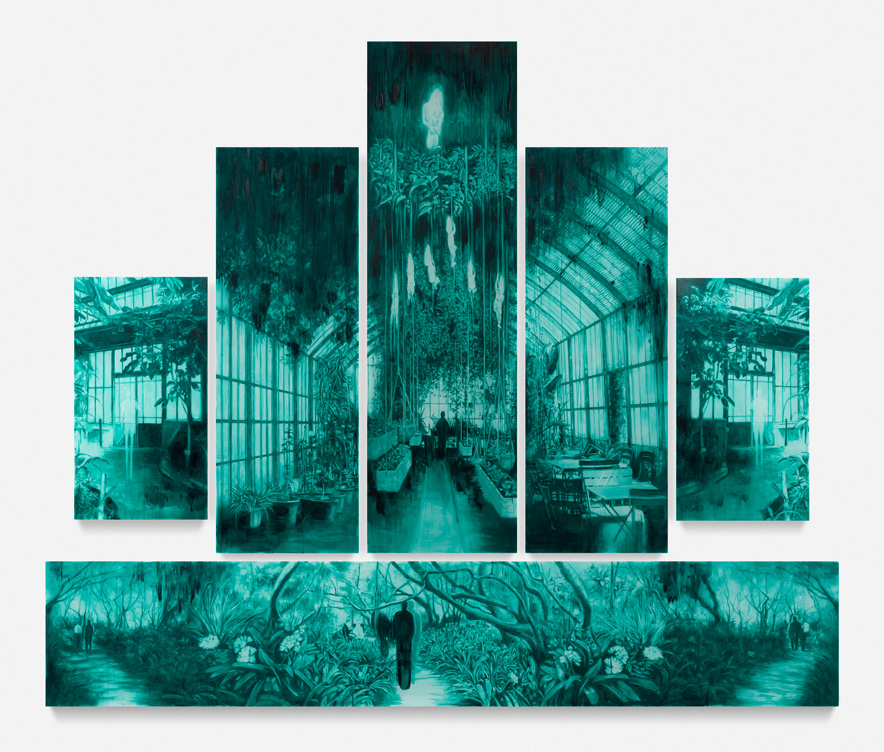 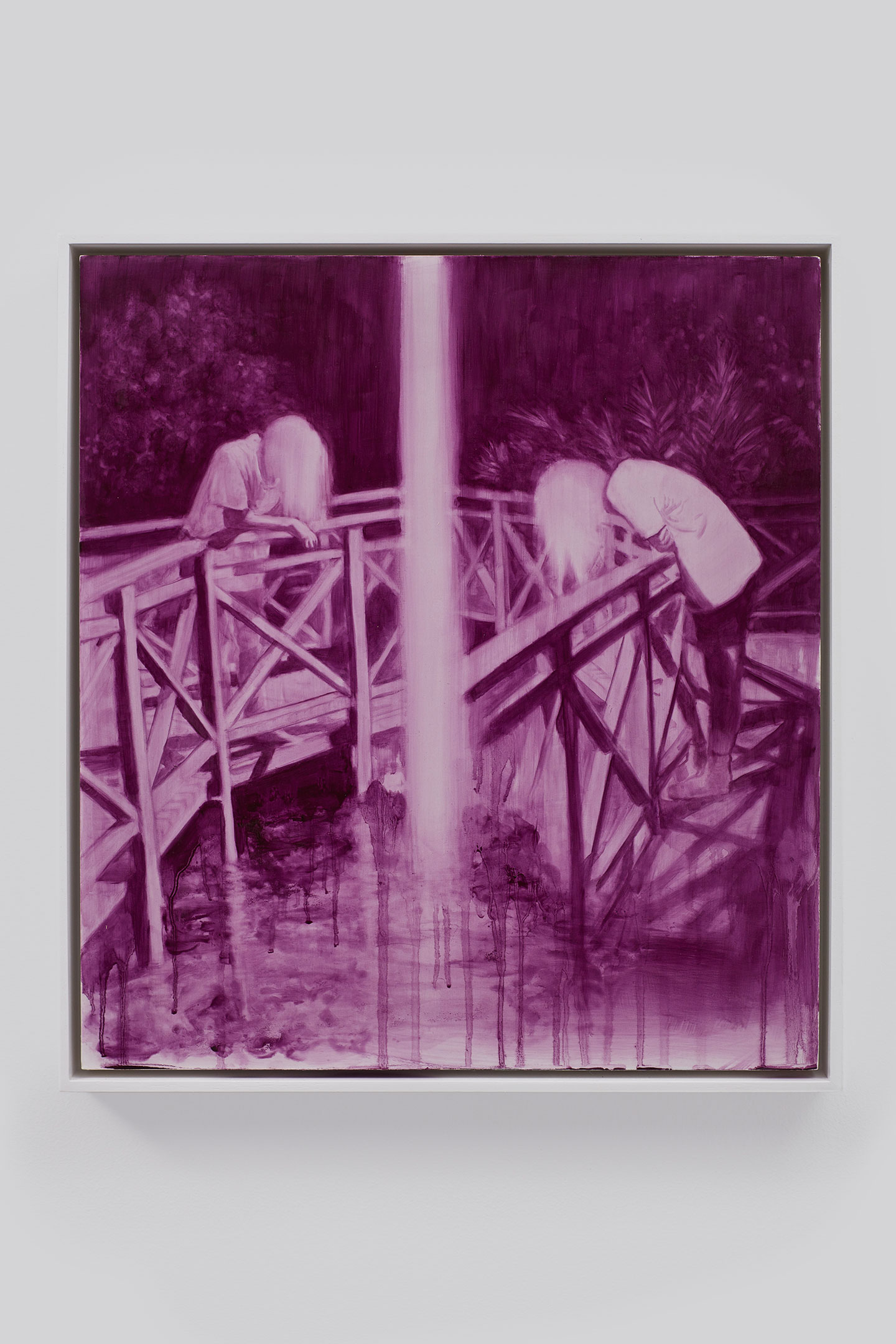 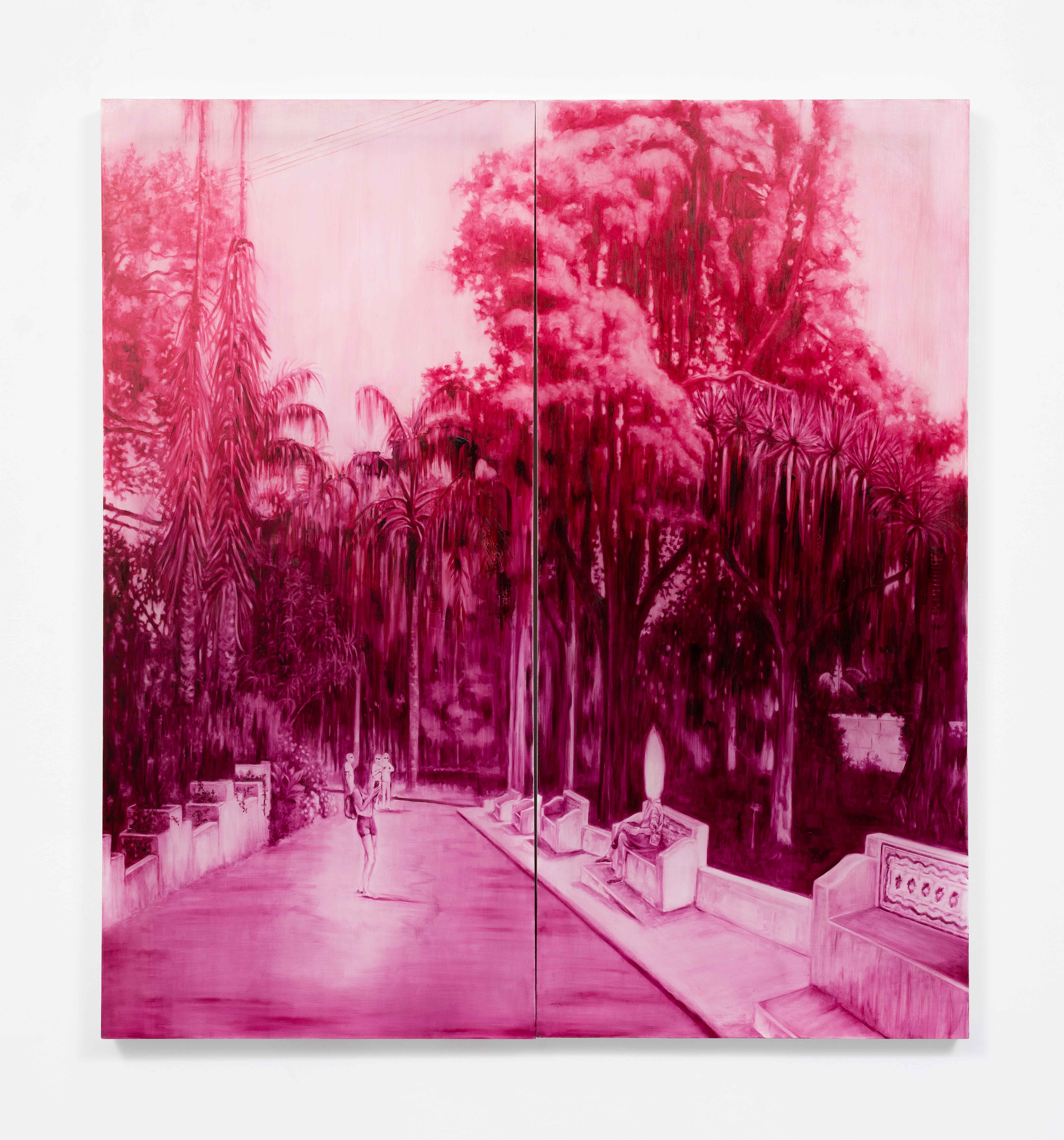 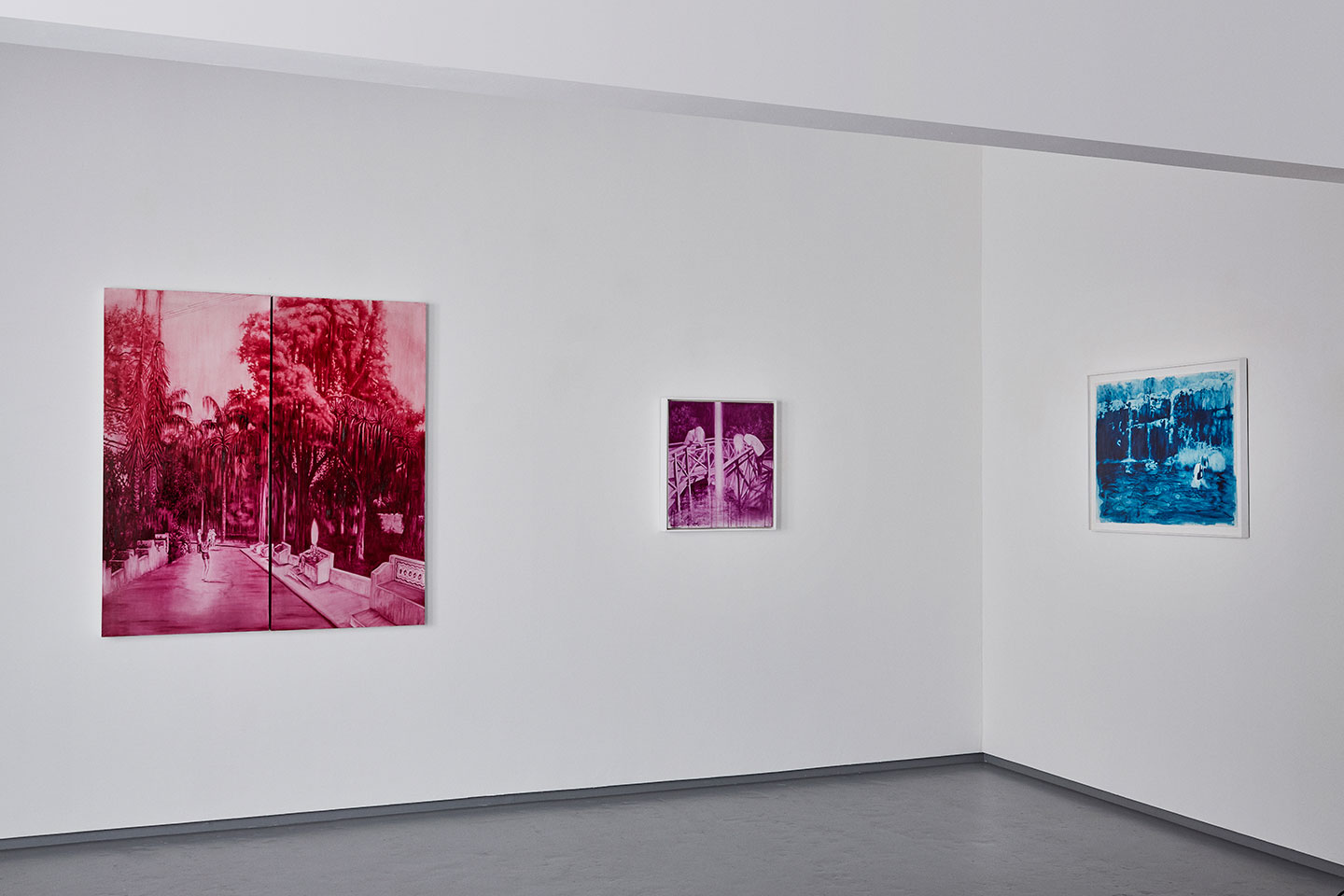 Arms out of Water 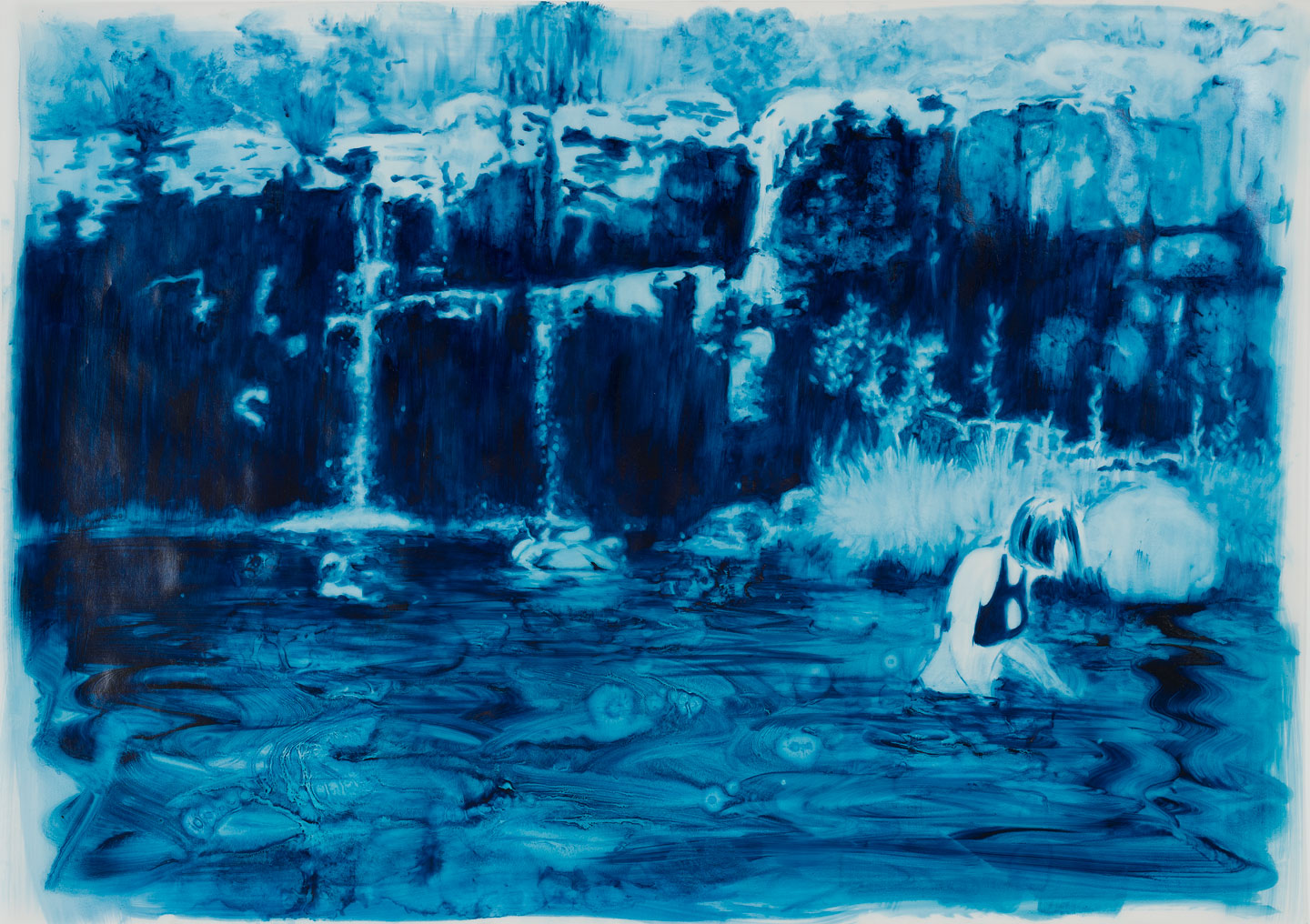 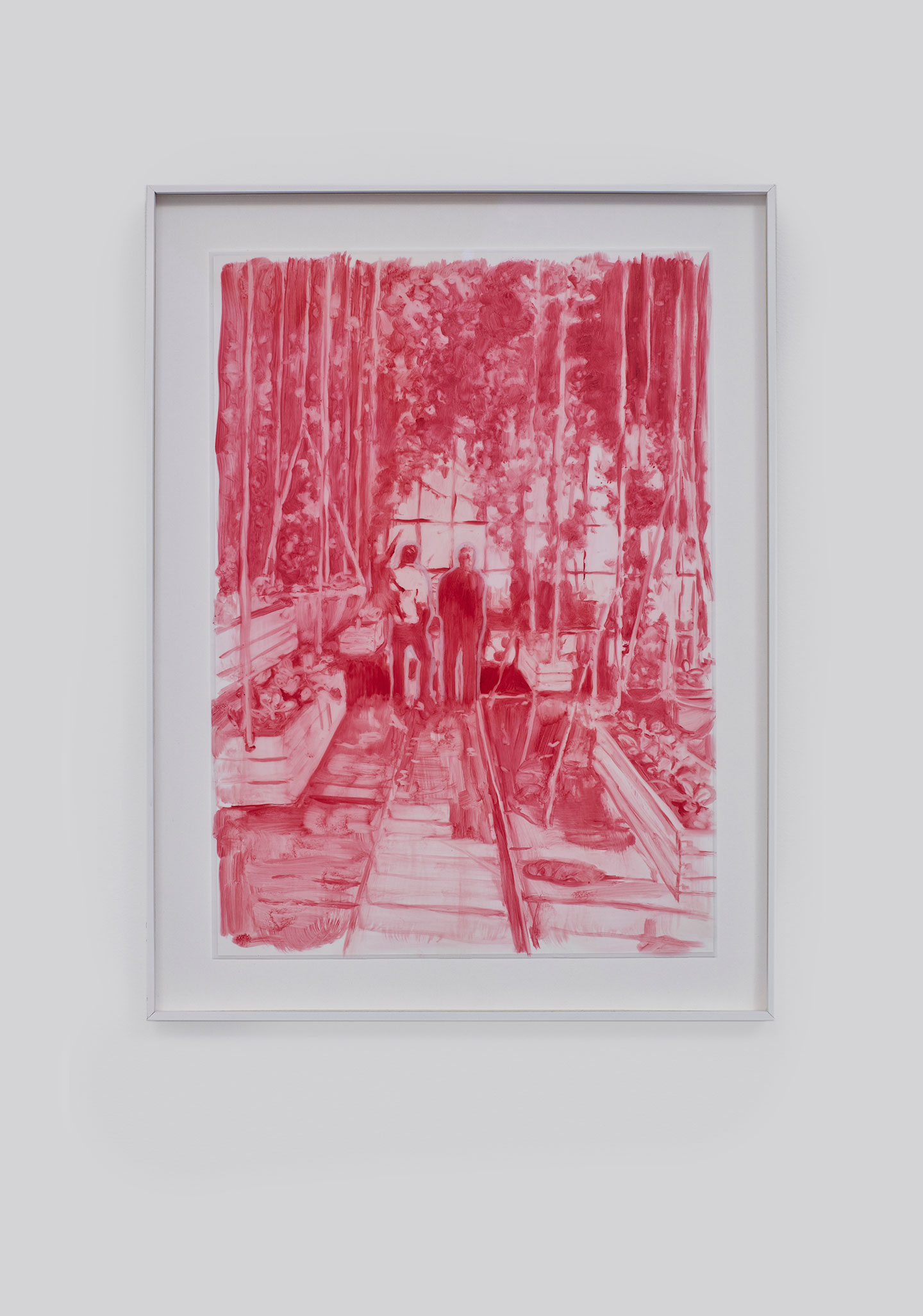 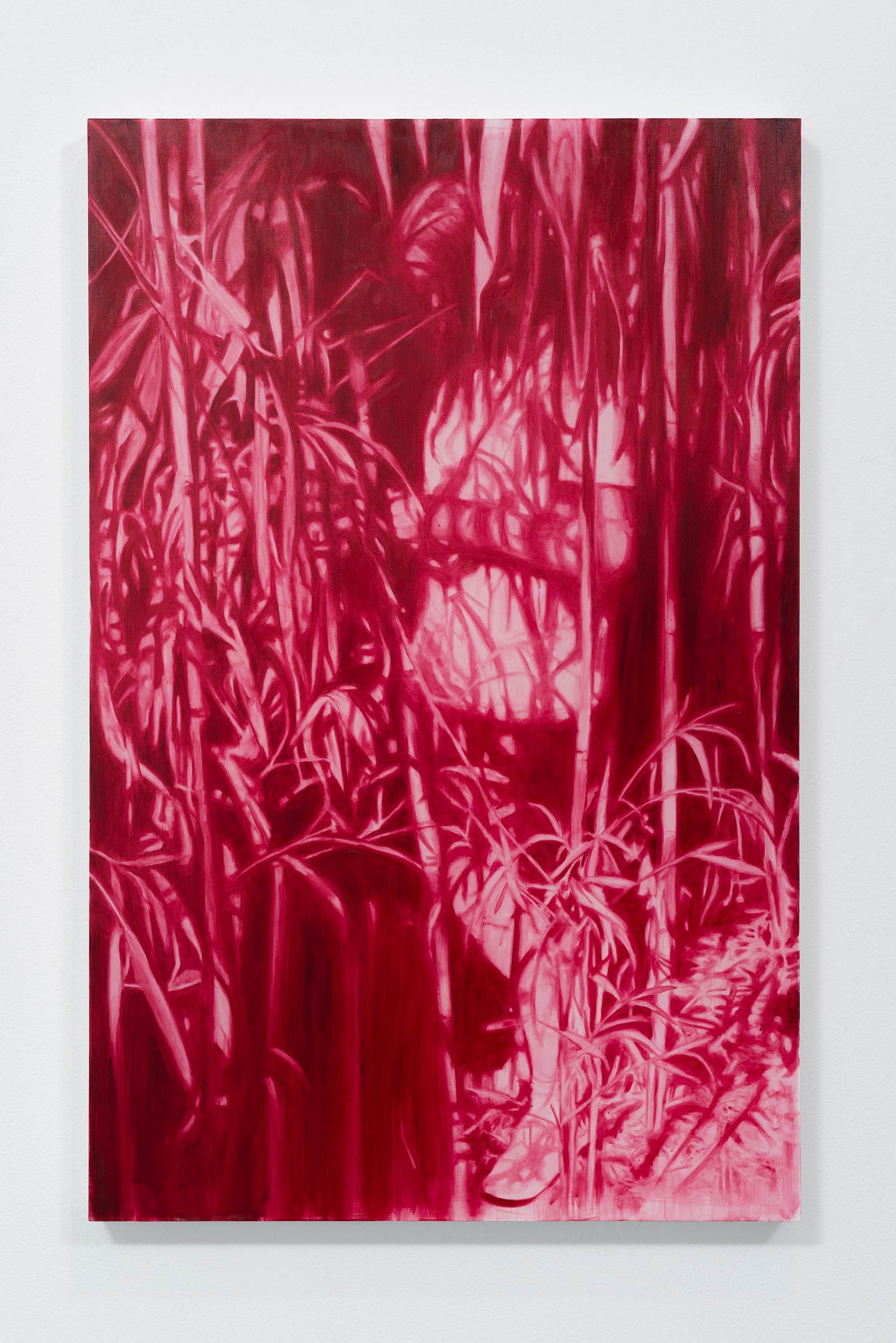 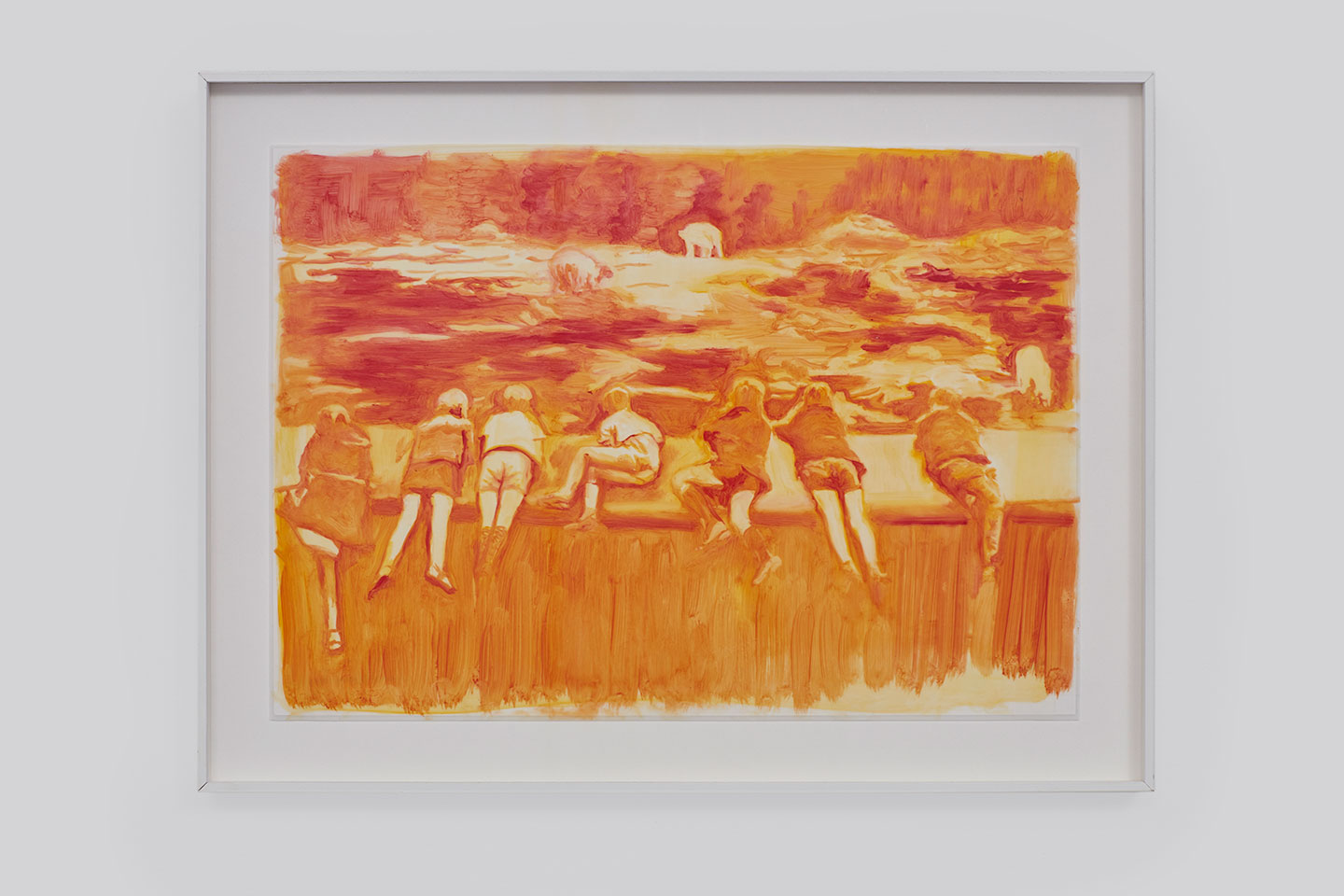 This is the world, which is fuller
and more difficult to learn than I have said.
You are right to smudge it that way
with red and then
with orange: the world burns

In her latest body of work, Swinney places ecological concerns at the forefront of her focus, bringing the viewer’s awareness to our increasing alienation from natural worlds. Swinney depicts scenes where obscured, maladroit-postured figures occupy ‘protected’ natural environments such as parks and reserves, in an attempt to open a conversation around the consequences of the implied distance between humankind and nature. This insistence on distinction, and the human need to assert control over nature for fear of being subjected to its forces, has led us to our precarious present and predicted future.

Human behaviour and existence is the predominant force of change in our current geopolitical epoch, the Anthropocene, causing the devastating environmental impacts of mass extinctions; heavily polluted oceans; deforestation; and altered atmospheric conditions, amongst others. And yet, we have seen a surge in climate change denialists rationalising these changes as the natural order. By recreating surreal landscapes, Swinney forces us to truly recognise the strangeness of our geopolitical moment and the consequences thereof: placing the dismissal of these ‘small’ erosions into question.

In Conservatory, ‘nature’ exists as an immaculately curated greenhouse, displayed almost as a Neoclassical altarpiece formed by painted panels. The ‘natural’ that Swinney seems to interrogate is constructed or ‘conserved’. In another work titled Black Pool, she depicts a sterile nature where people are at leisure within a controlled natural environment. The comfort of these figures relies on access, and a simulation of the natural such that it becomes artificial: a copy of the real. “The creation of leafy natural environments within people’s homes and work spaces speaks to a need for the natural, but an inability to either access or relate to it,” says Swinney.

In her work, the camera is included as a subtle motif to illustrate this distance. By digitising nature, it becomes more familiar; a representation of these immersive worlds rather than reality, and an autonomous way of world-making. Swinney mimics this artificial distortion of the ‘real’ in her process of making: “[the paintings] are a simulacra, taken from reality into photography – photoshop – printed – painted.” They are artificial replicas much the same as a frozen image. Photographs function as capsules of a moment in time, but as Susan Sontag argues, “The force of a photograph is that it keeps open to scrutiny instants which the normal flow of time immediately replaces”. She continues, “…the truths that can be rendered in a dissociated moment, however significant or decisive, have a very narrow relation to the needs of understanding. Contrary to what is suggested by the humanist claims made for photography, the camera’s ability to transform reality into something beautiful derives from its relative weakness as a means of conveying truth.” Here, Sontag suggests that the still image is an unreliable ‘truth’.

However, when we currently interact with mobile technology as an appendage and rely on the Internet to document, store, and archive our identities, would seeing ourselves photographed within a natural environment through a digital interface, read more as truth than experience? Our allegiance to technology and image-generation indicates a security and trust in the virtual world more so than the ‘real’ one. “We live in an age of illusions,” Swinney concurs. Search engines, algorithms, content production, and data collection, all act as a means of mental support, allowing us to experience the ‘real’ through the virtual. We are saturated with images of nature; of sunsets, forests, seascapes. With the influence of social media, we experience natural environments through how they have been composed by others, and with the addition of instant-sharing, even our performances and experiences in these spaces are narrated by others.

Similarly, Swinney obliterates the identities of the figures as a way of allowing the audience to mirror themselves in these subjects. This anonymity speaks, simultaneously, to humanity as one homogenous mass of consumption. With an increase in habituation in cities, and fewer people entering agricultural industries, there are more consumers than ever previously recorded. The recent rise in consumer consciousness is an attempt to slow down this acceleration, by encouraging cognisance to the social, environmental, ecological, and political impacts of our consumption, and to use our buying power to make ethical decisions. Swinney manifests this moment of attentiveness through the frozen quality of her works, evoking stillness and silence as devices for contemplation. The hazy sfumato technique of her cool blues obscures vision, giving an implied uncertainty or resignation: an aspect of watching and waiting. Conservatory’s monumental classicism slows the viewer down further, with its deliberate presence. This religious symbolism may also be Swinney’s nod to our evolving social order, and to the evolution of power from gods, to humans, to machines.

Swinney’s work responds to the physical, virtual, and spiritual worlds around her. If art is to imitate life, then art, as Swinney’s paintings are, is a copy of a copy — leading us, again, towards illusion, rather than reality. Swinney engages with Plato’s philosophy of art, which describes the physical world as an imperfect and decaying copy of a perfect, eternal changeless original. This reverts back to the tensions made tangible by Swinney between unreal and hyper-real natural environments, such as aquariums, greenhouses, and botanical gardens. She depicts nature through illustrating the hyper-natural in a dream-like fog, defamiliarising it almost in an attempt to familiarise us with it: to make us feel what nature has been or could be.

I am reminded of Viktor Shklovsky’s Art as Technique here, where Shklovsky declares: “[Art] exists that one may recover the sensation of life; it exists to make one feel things, to make the stone stony. The purpose of art is to impart the sensation of things as they are perceived and not as they are known. The technique of art is to make an object “unfamiliar,” to make forms difficult, to increase the difficulty and length of perception because the process of perception is an aesthetic end in itself and must be prolonged.” Swinney’s work exists as a translation of the sensation of nature. With the destruction and erosion of our natural environments, the reliance falls on creative ecosystems to think of innovative ways for the current and future generations to access nature.

Swinney’s work, however, exceeds beyond mere recreation or illusion, she holds the stillness of this time as a poignant teaching moment, as if to caution: “this will all be gone”. The existence of Swinney’s paintings alone suggests a dissatisfaction with the quality of the “nature” we are presented with, because the real itself has already been tainted.

Having graduated from the Michaelis School of Fine Arts in 2015, Ruby Swinney (b. 1992) has since had two solo exhibitions: Human Nature at Zeitz MOCAA in 2018 and Ignis Fatuus at WHATIFTHEWORLD in 2017.

Working primarily with oil on tracing paper, and oil on silk, her work seems to step into a parallel world, where strange figures inhabit timeless landscapes. Her paintings evoke our present uncertainties, and our yearning for a vanishing natural world that is growing darker and unfamiliar.