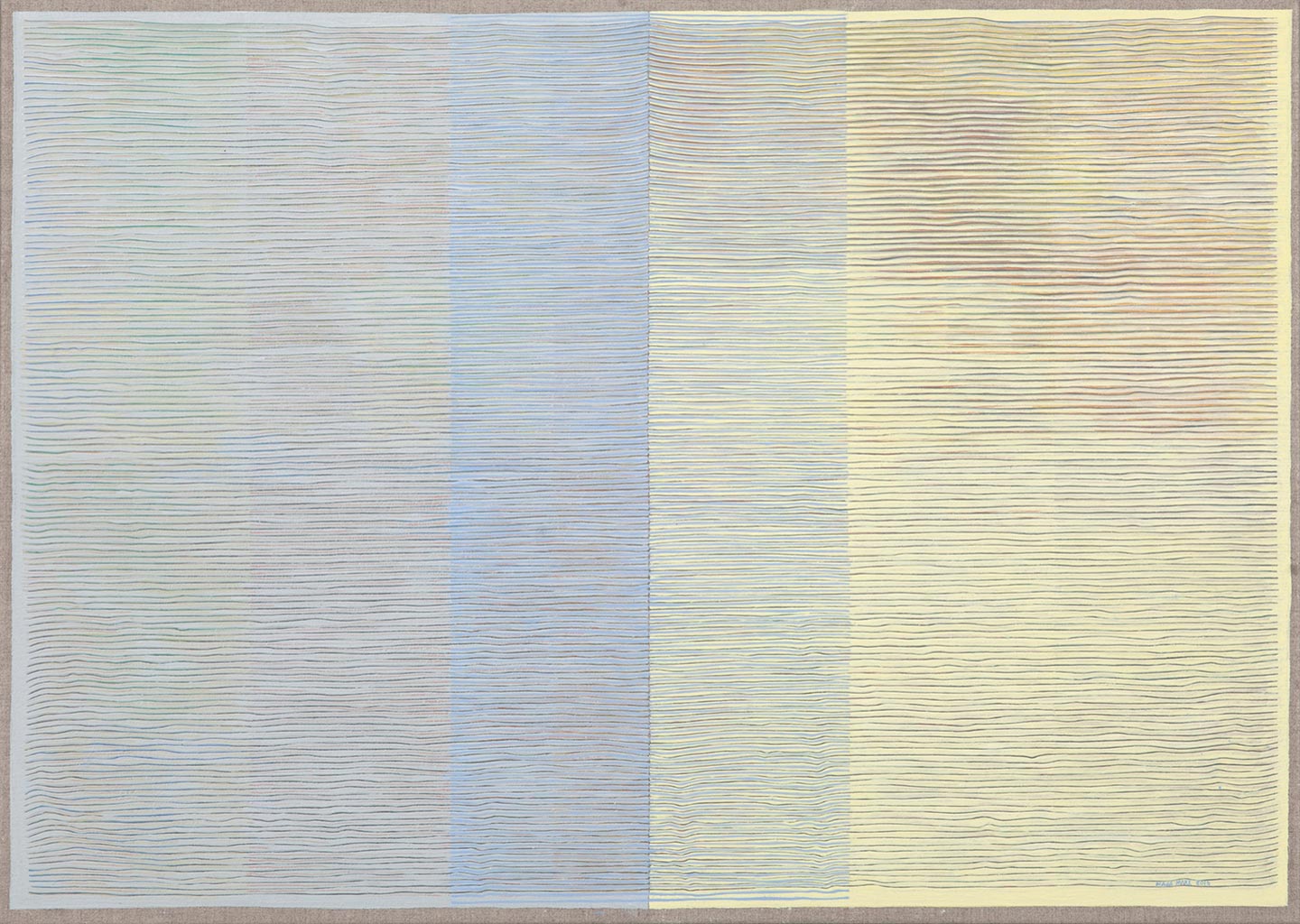 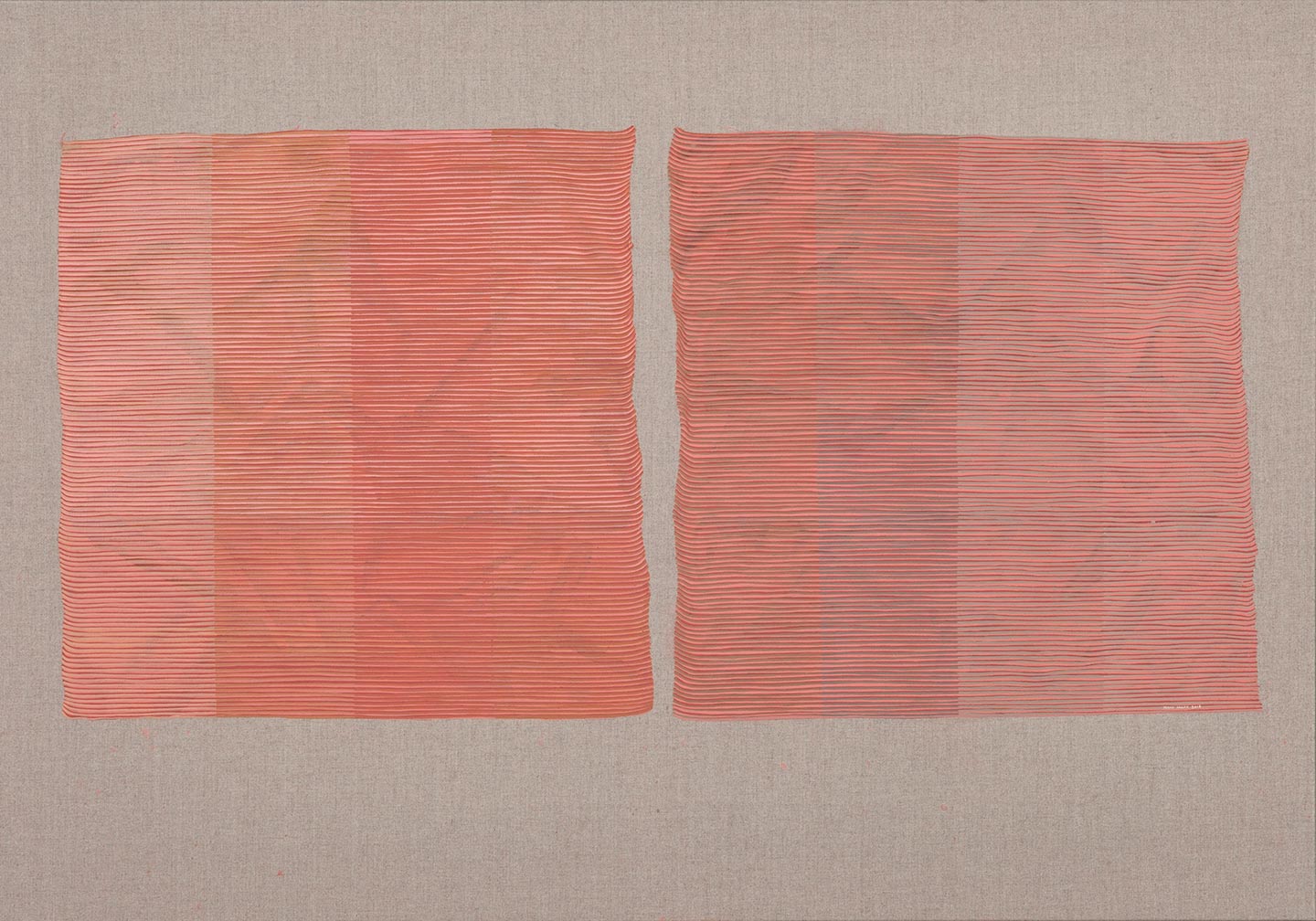 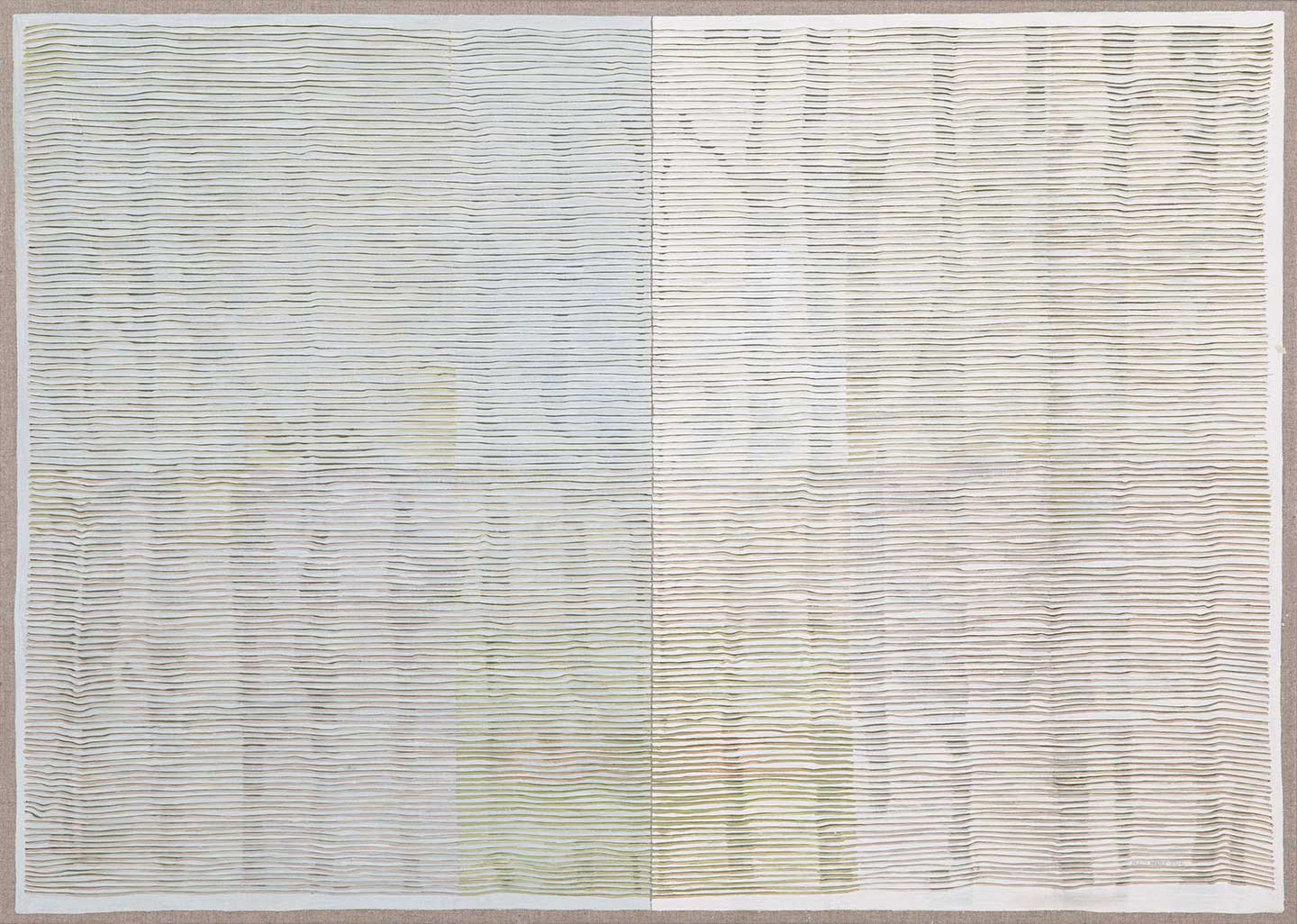 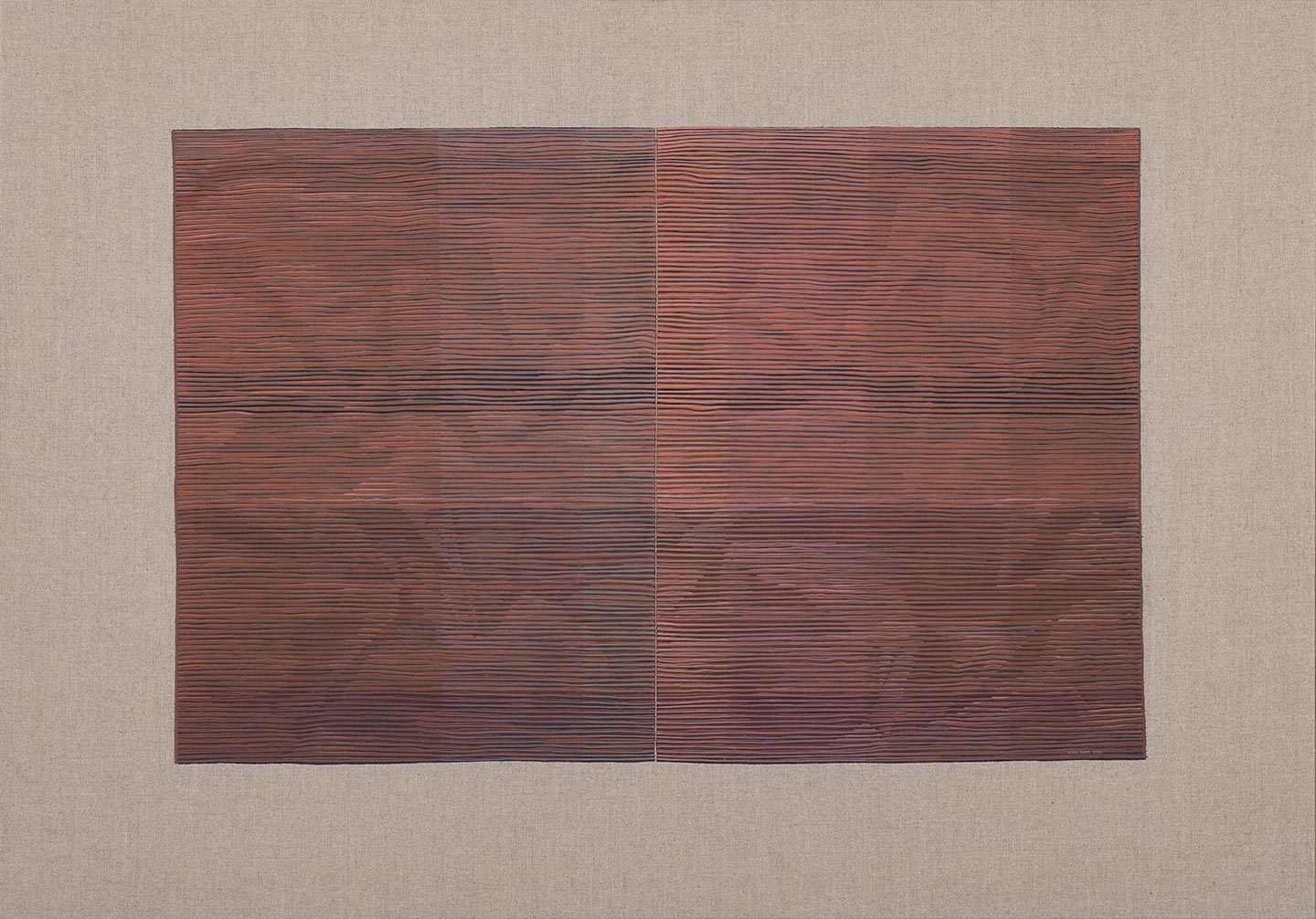 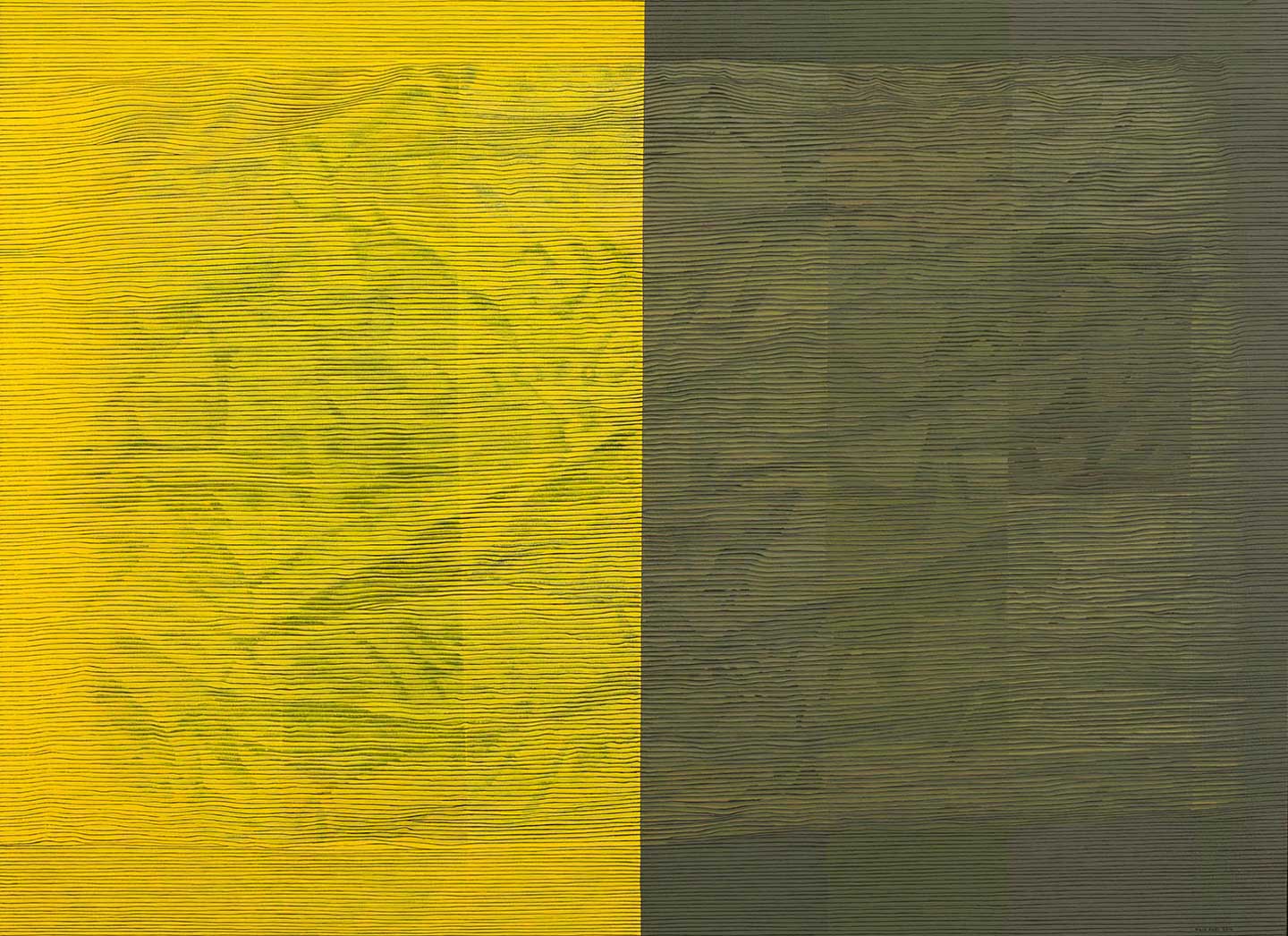 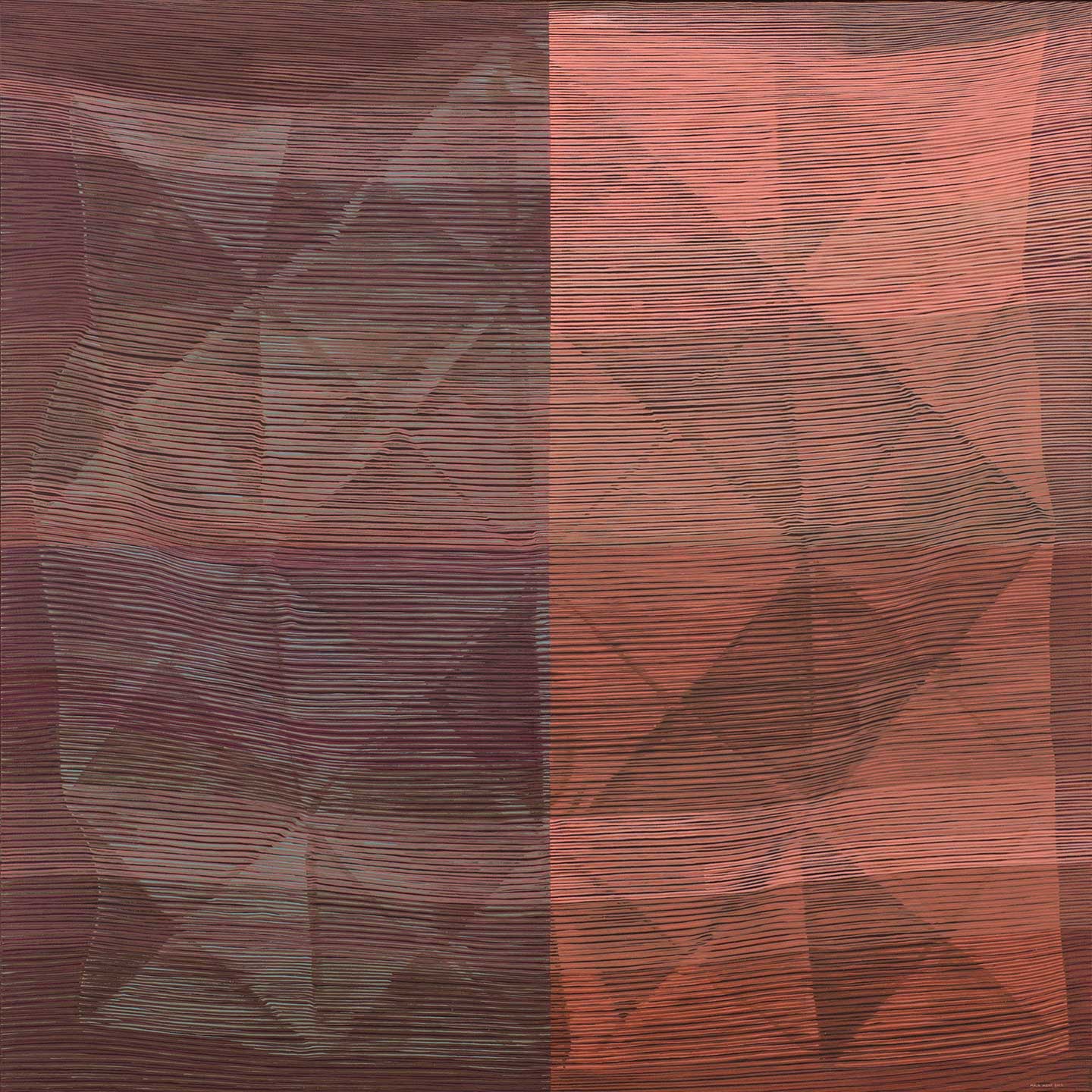 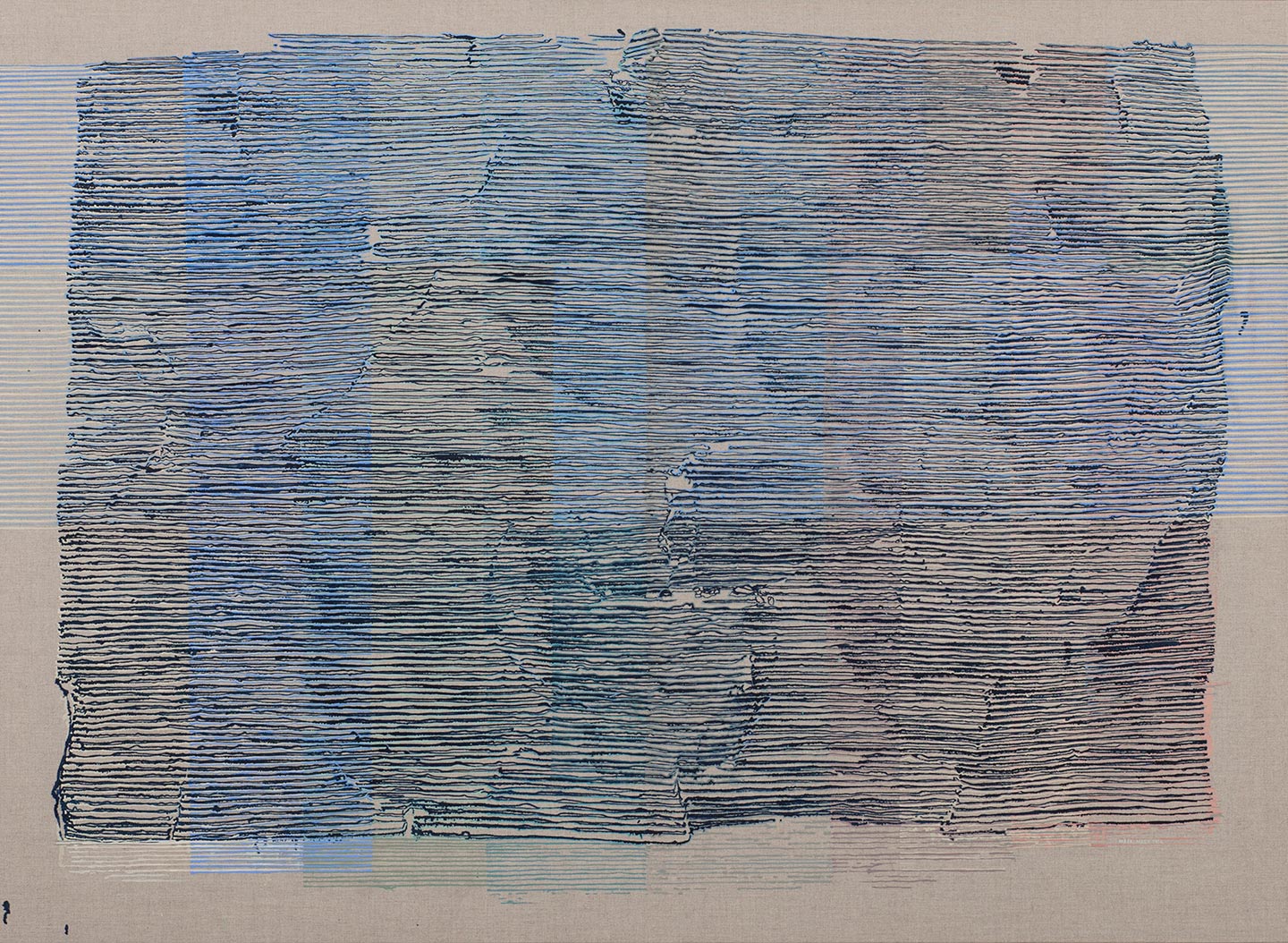 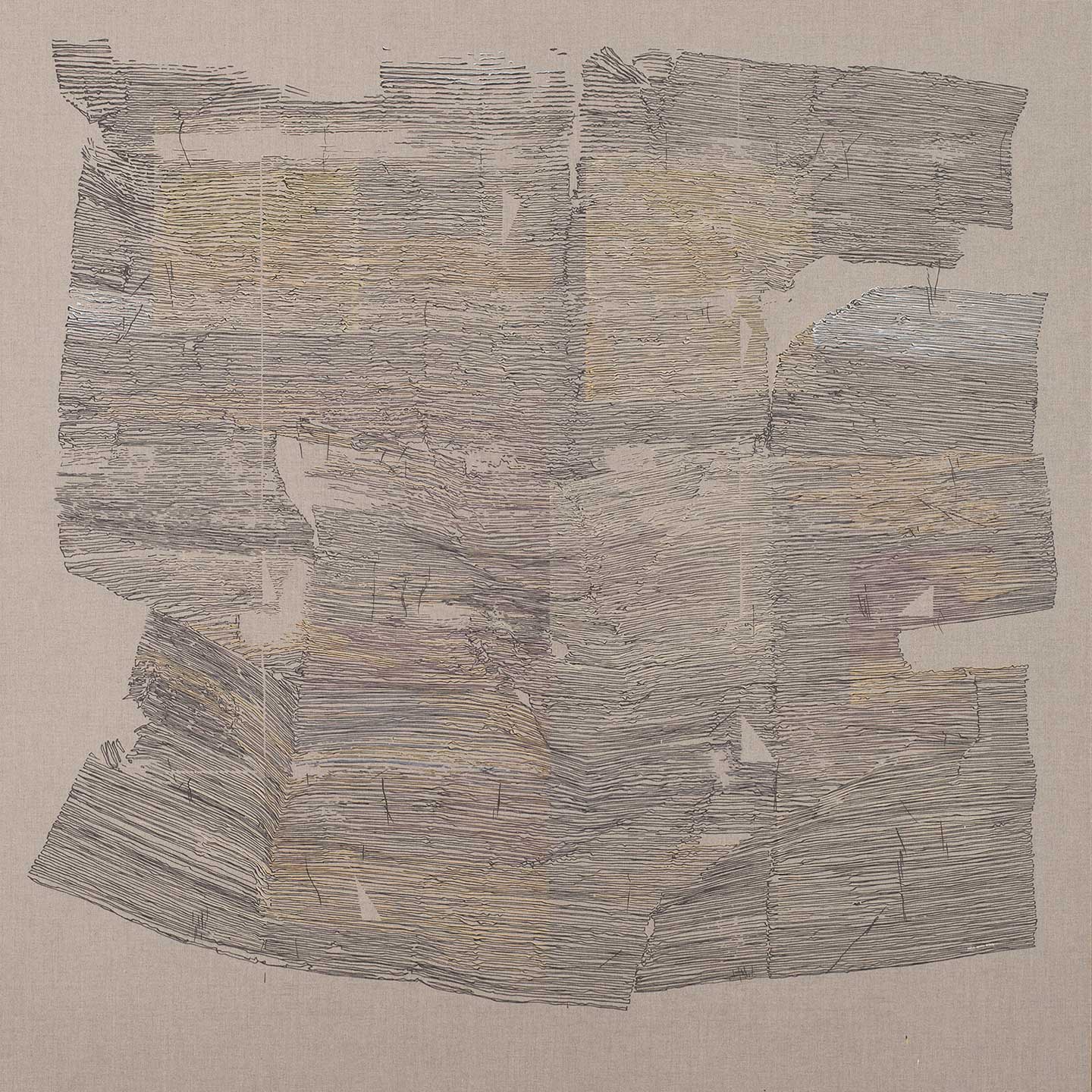 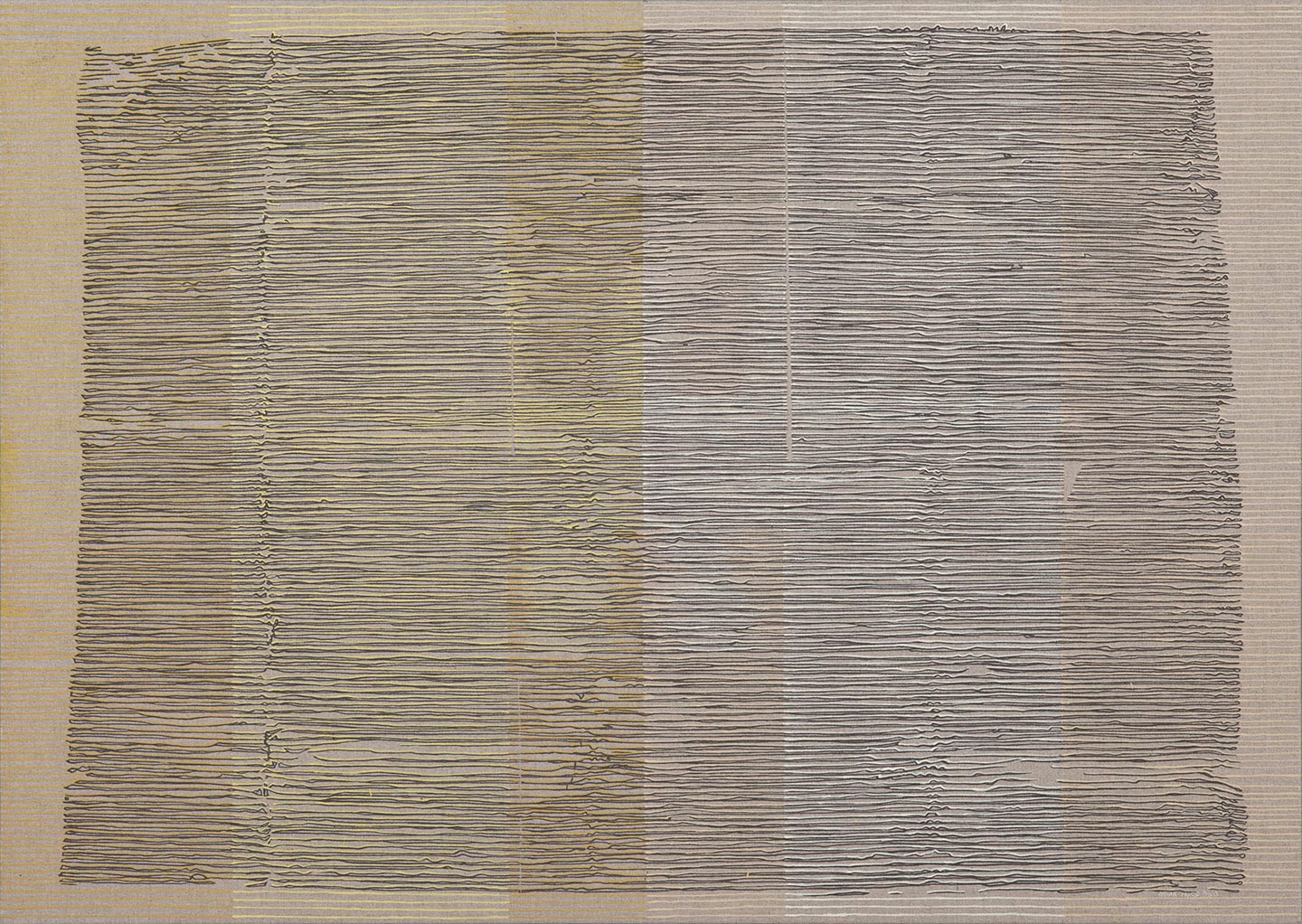 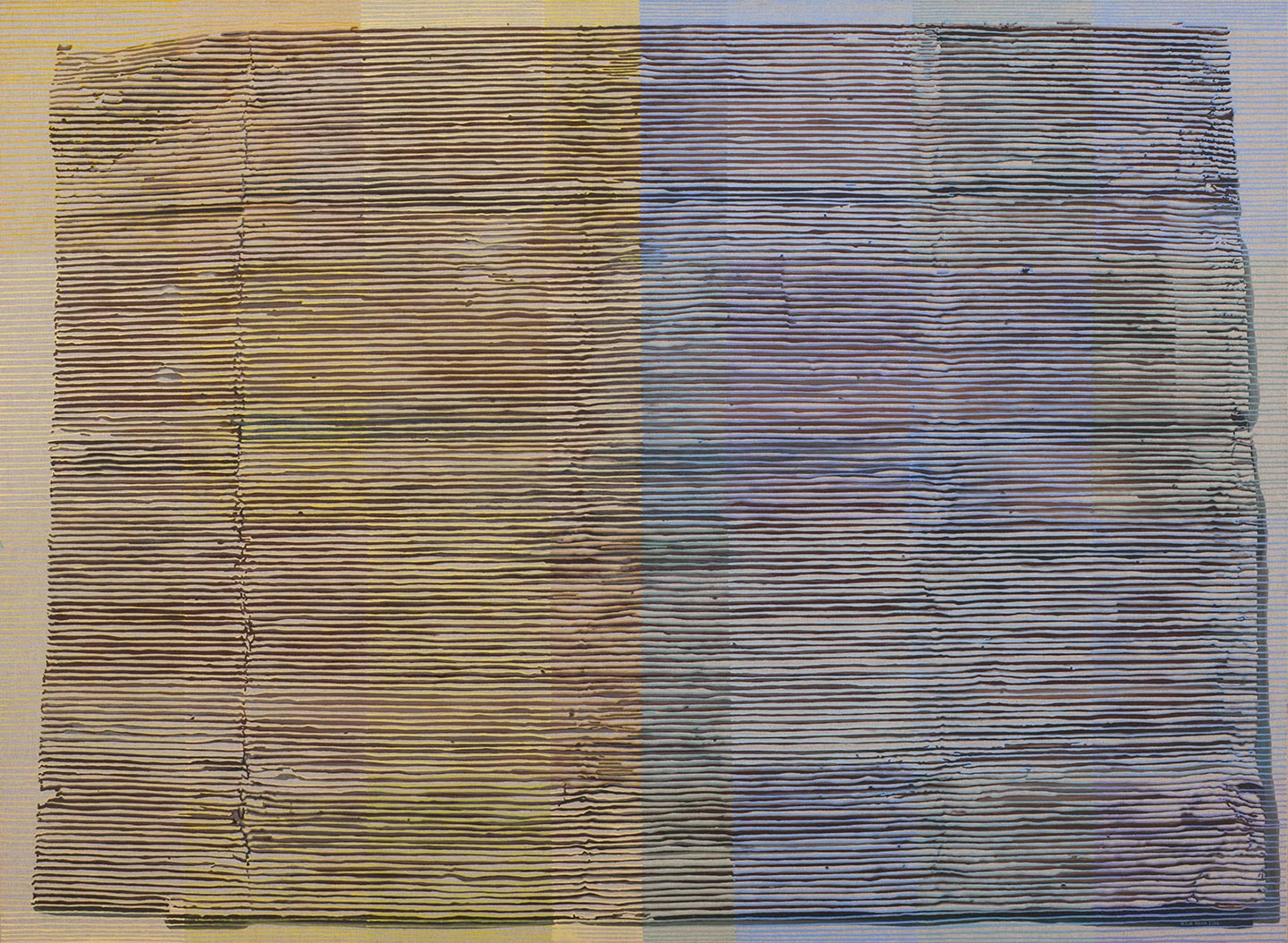 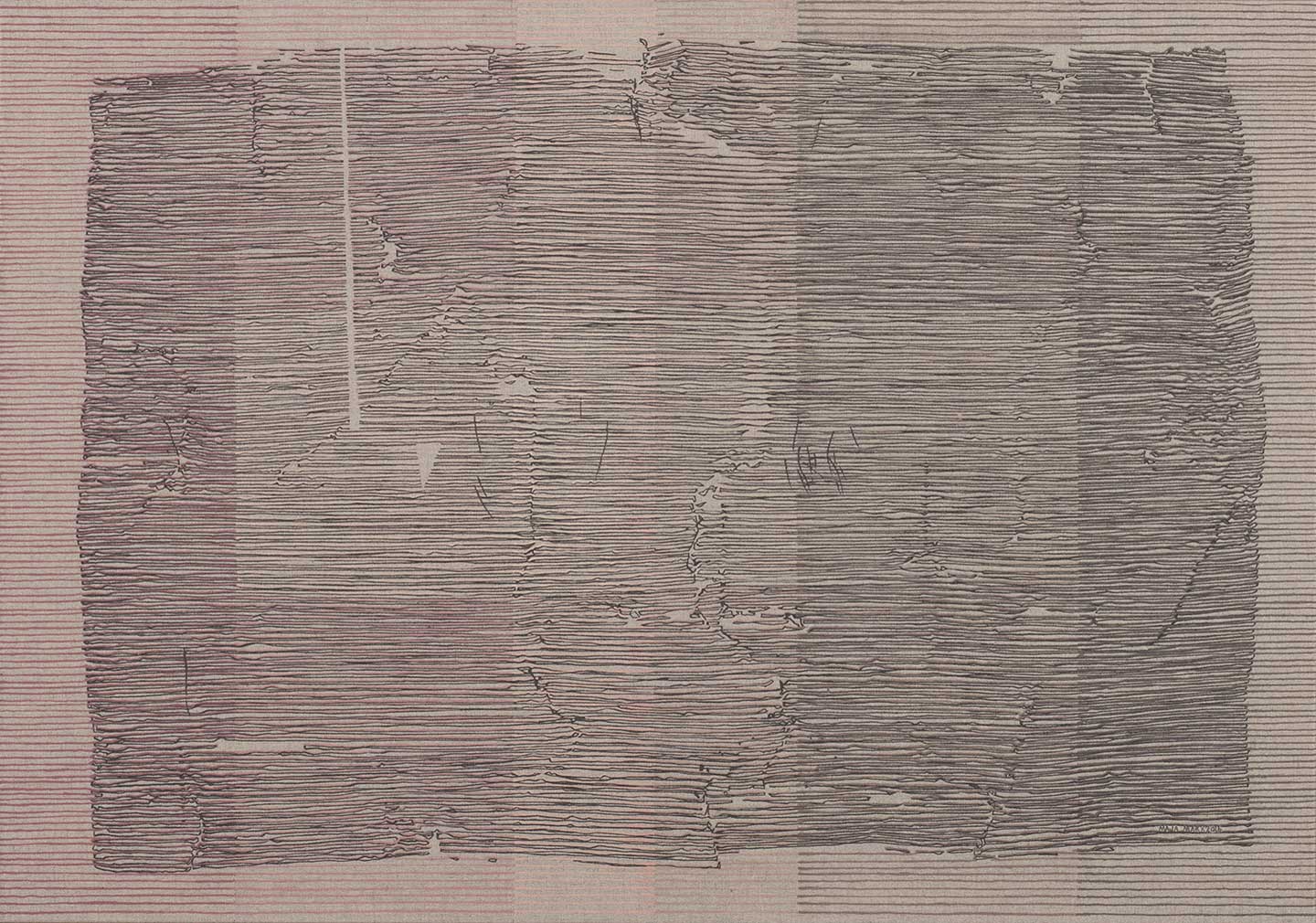 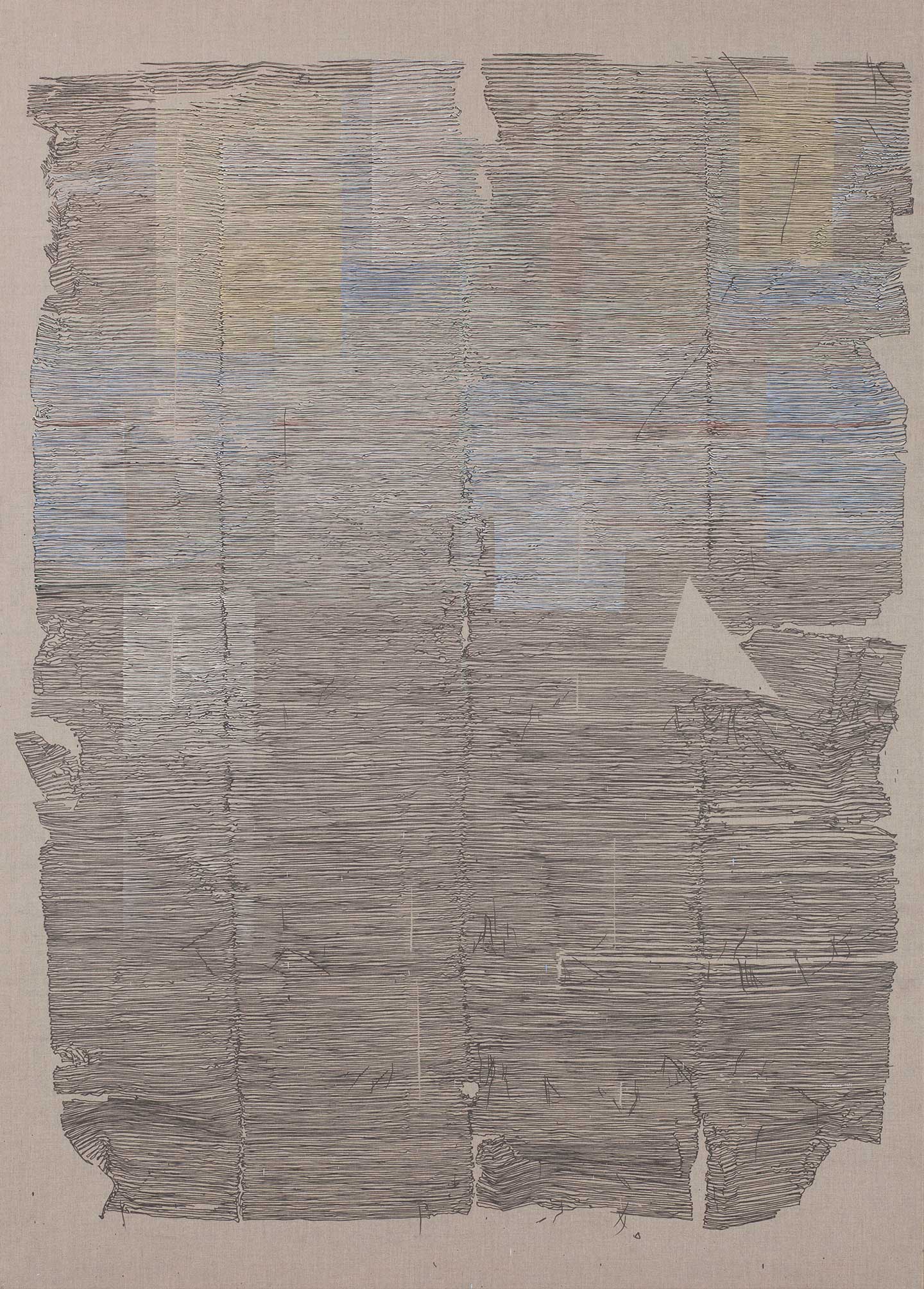 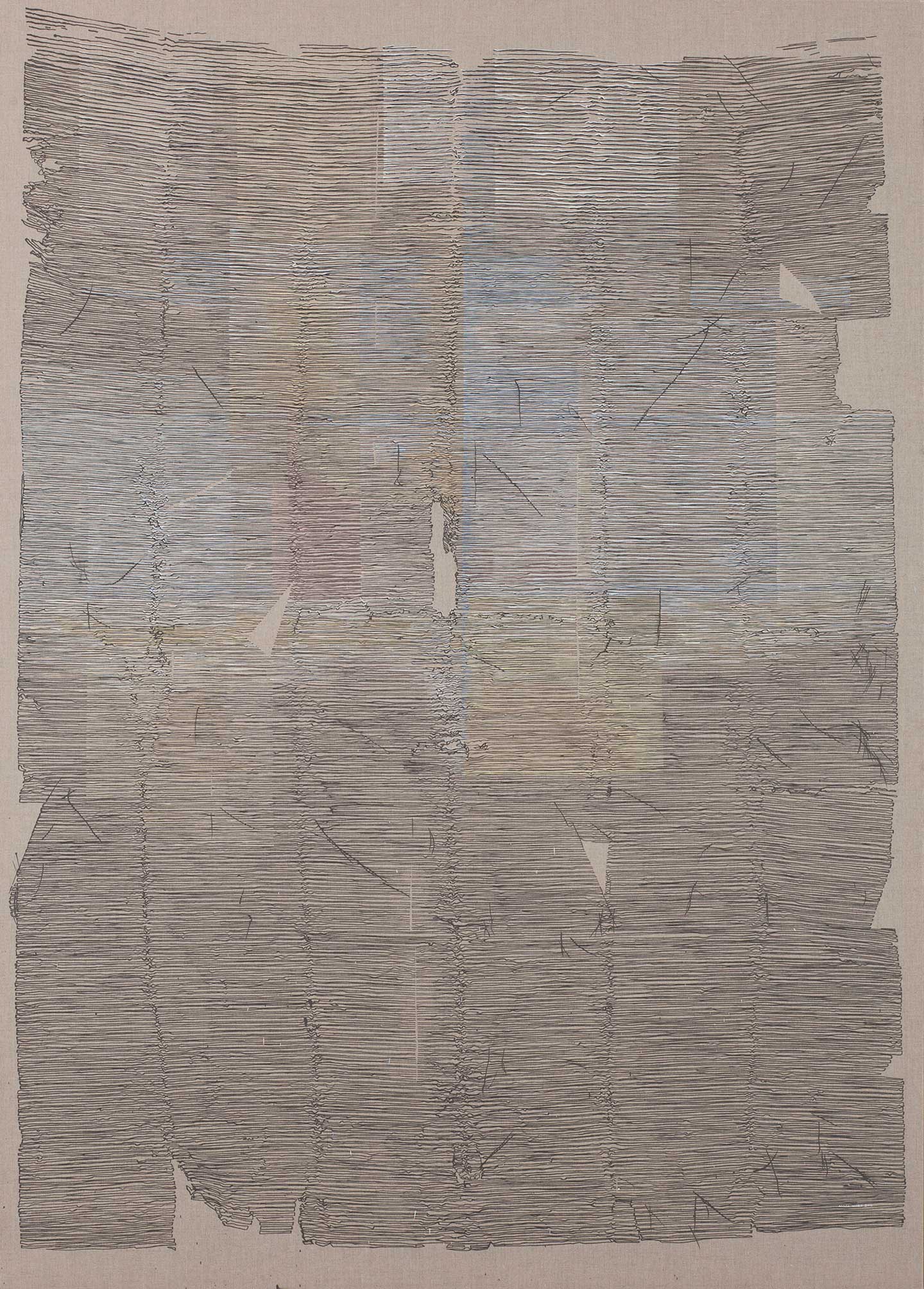 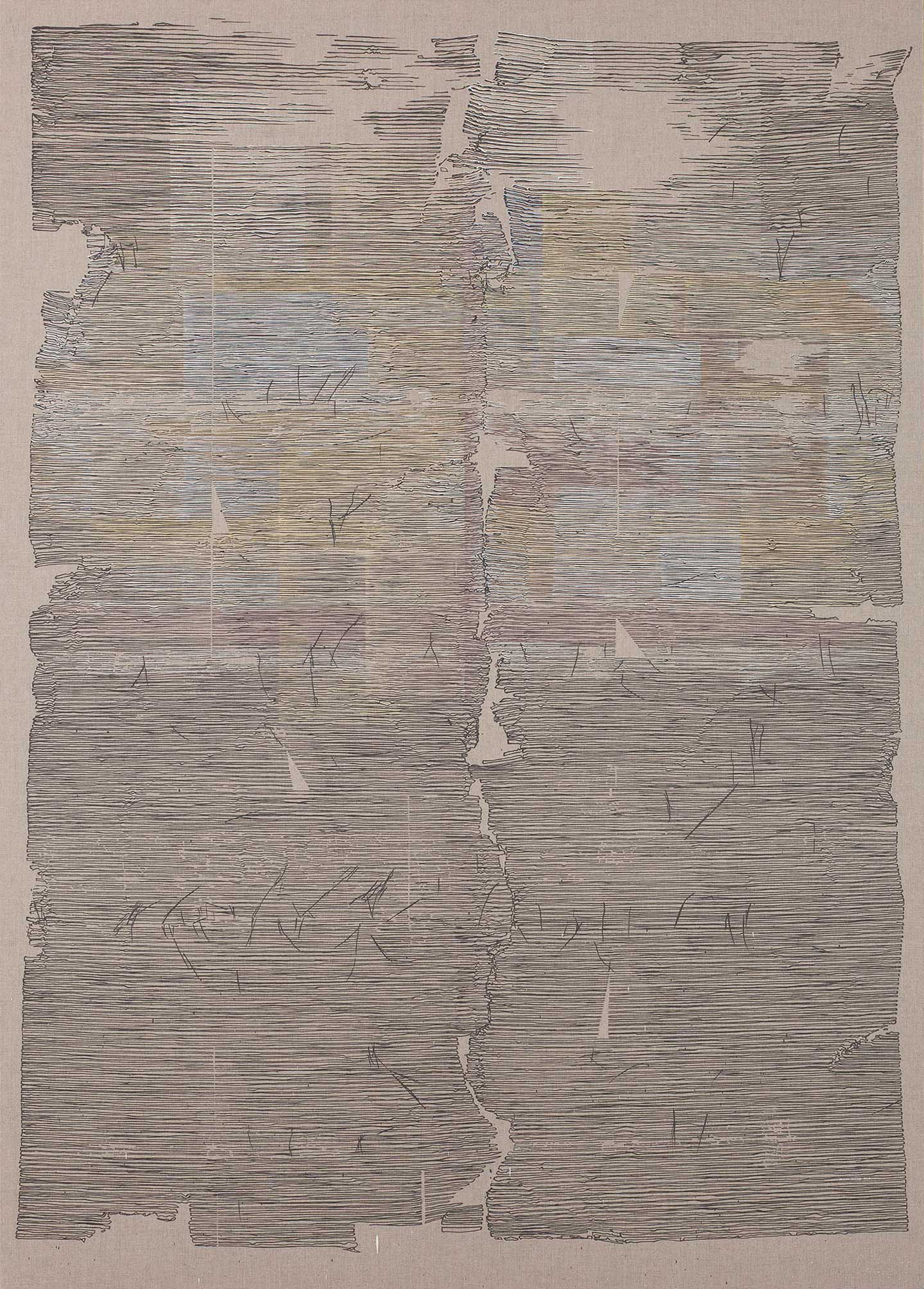 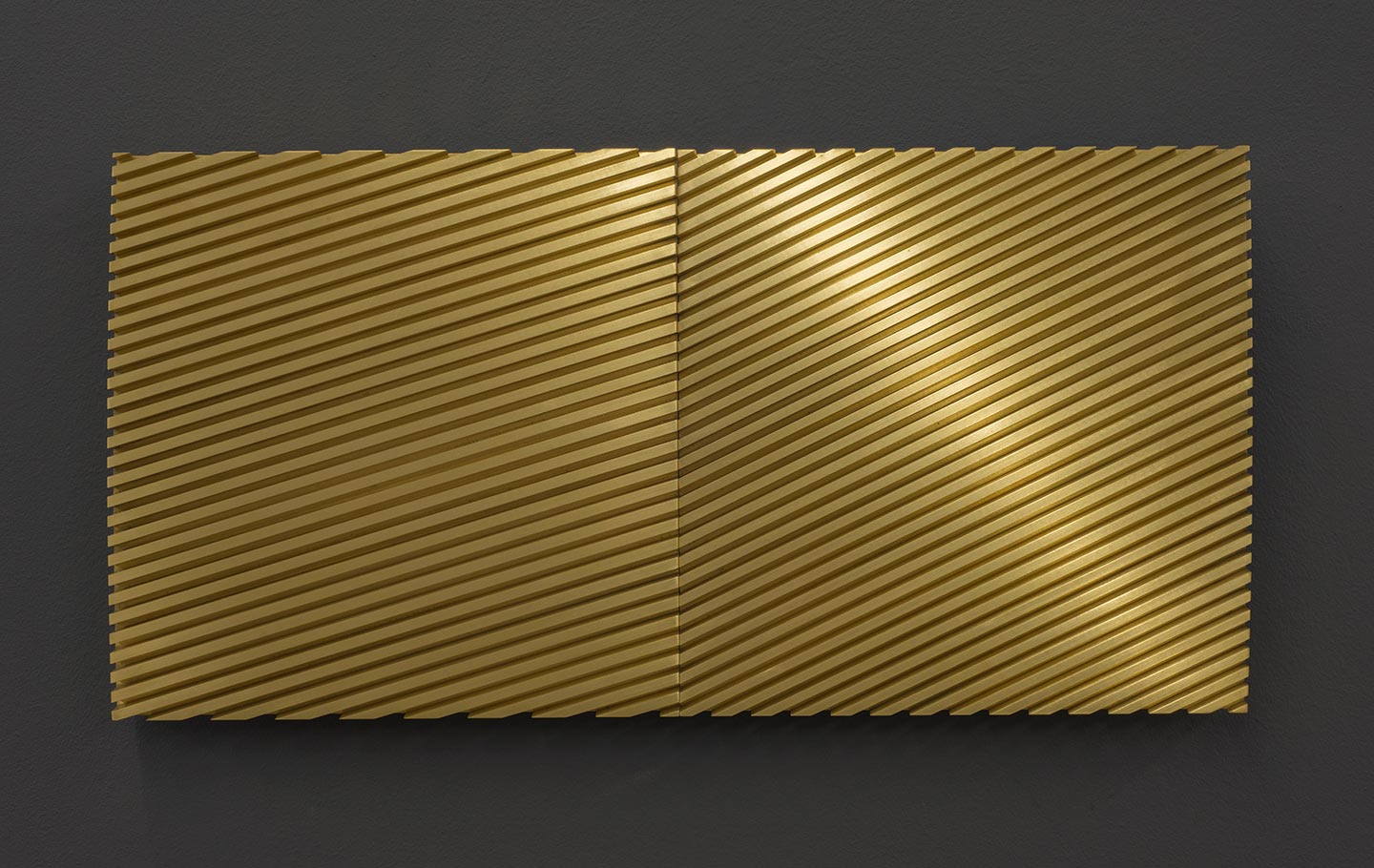 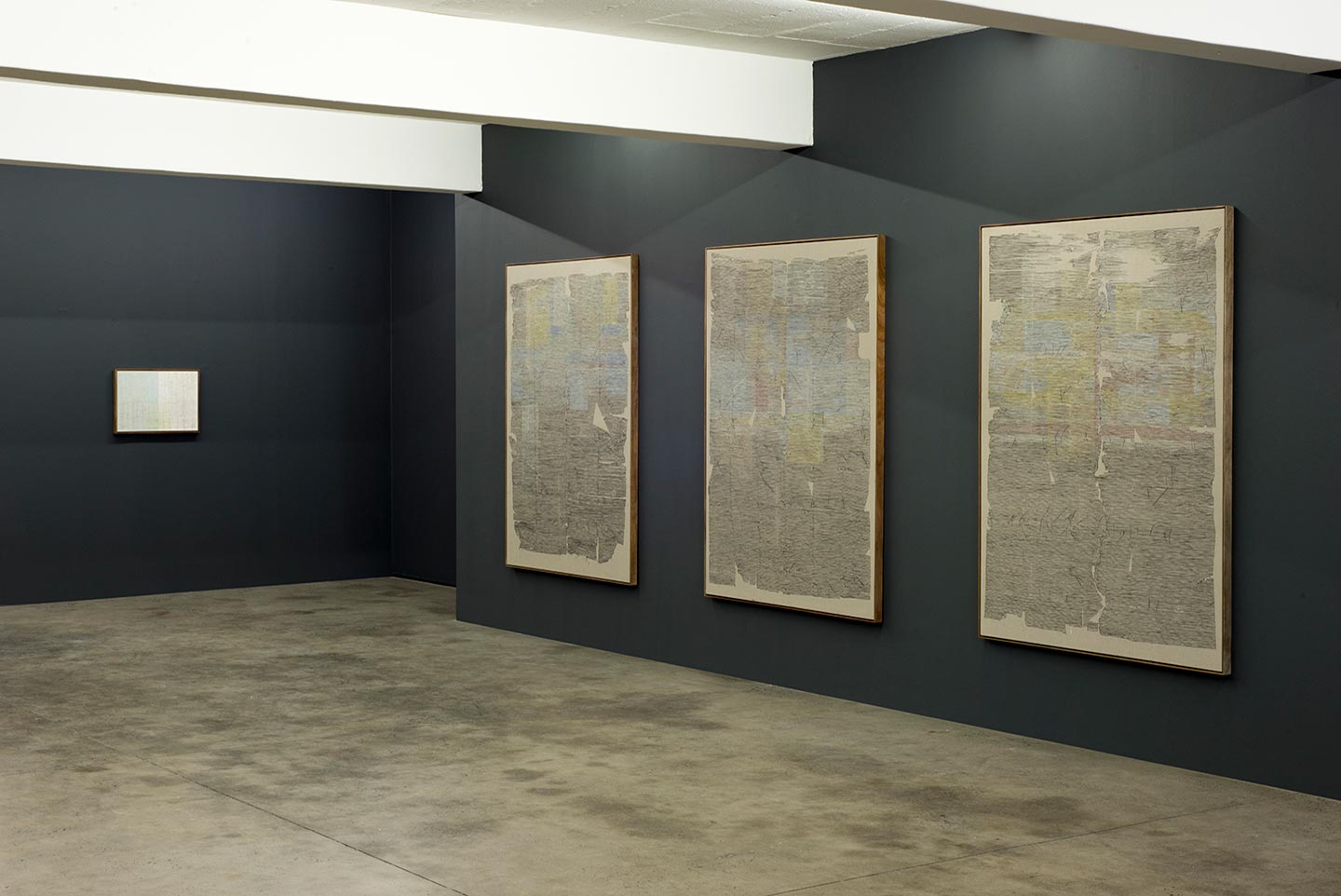 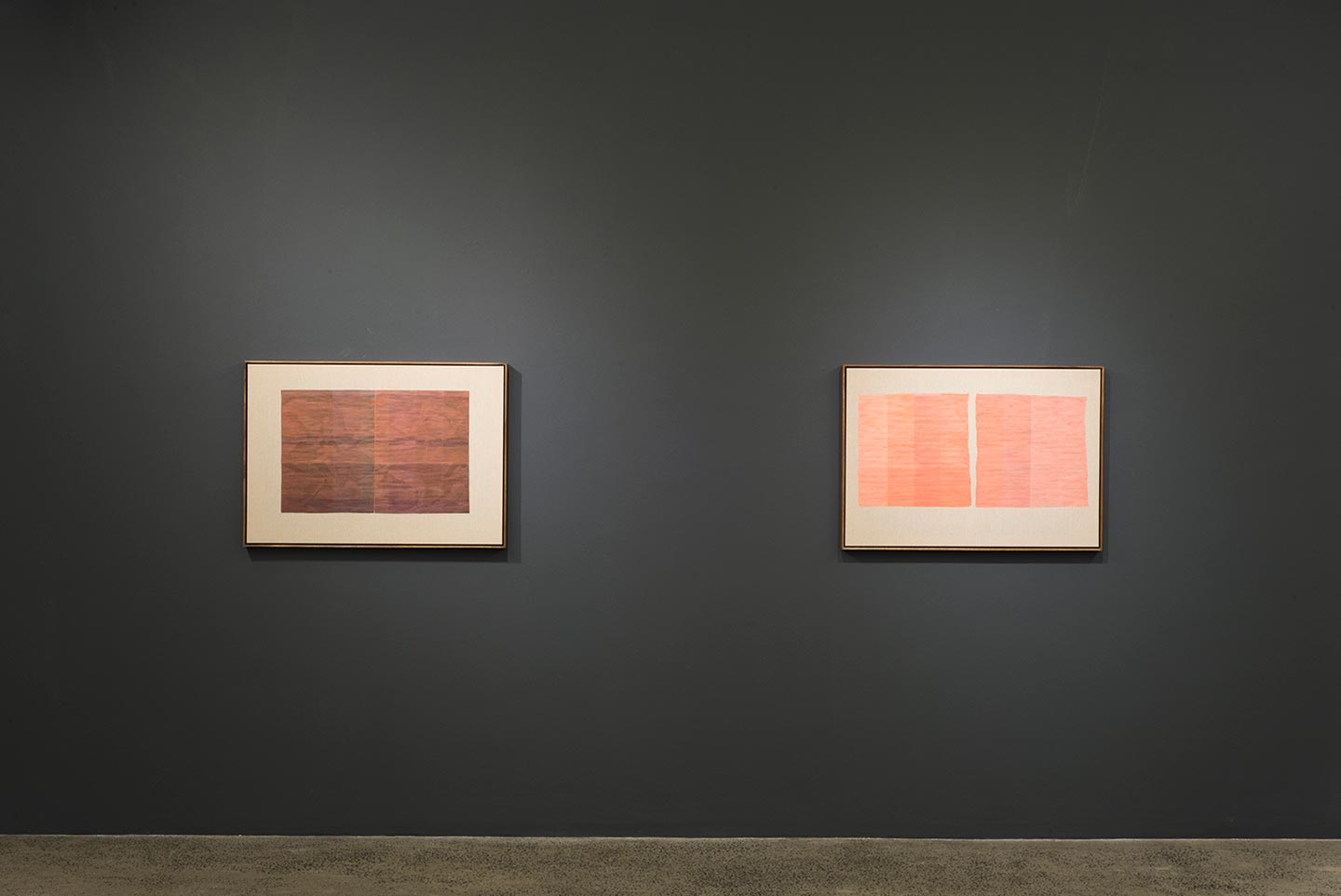 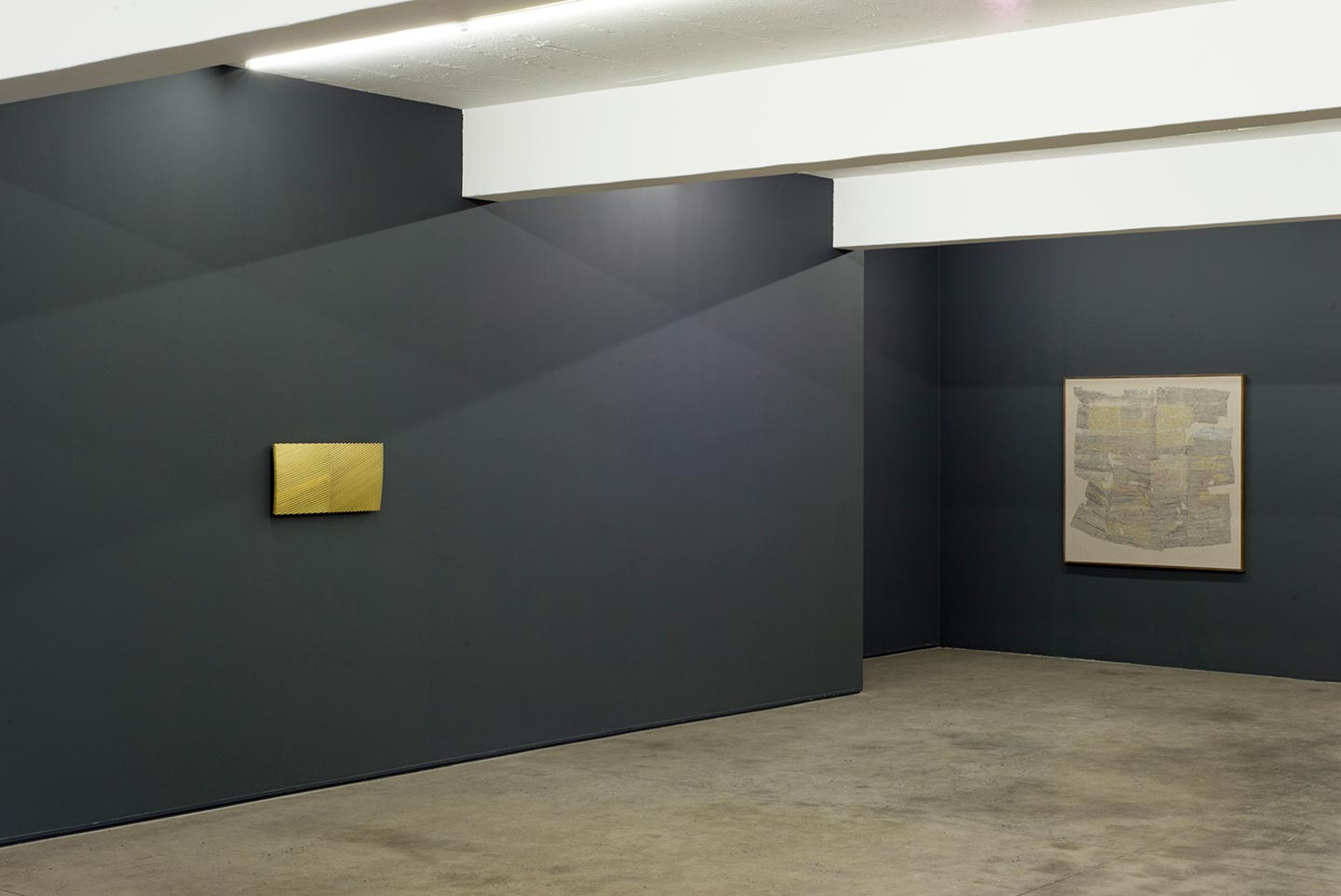 WHATIFTHEWORLD is pleased to present GLARE, a new solo exhibition of painting and sculpture by Maja Marx.

Maja Marx approaches painting as a practice essentially concerned with the optical activation of surface. She transcribes the gentle folds of cloth, folded and creased paper, the corrugations of cardboard, onto the linen of her canvasses. Insofar as these paintings are studies of objects, they are also arguably still lives.

However, the fixation on surface very literally transcends both the genre as well as the boundaries of the object itself. The transcription of surface detail in these paintings is an act that combines the mark making of painterly practice with the act of writing. Writing inscribes, scores and activates paper; one can say that it marks the flatness of that surface in order for that very flatness to lapse into a semiotic depth. When looking at a written letter, one can either look at the black lines that score the surface like the lines of a ploughed field, or read these lines and become immersed in the language content and ‘depths’ that it carries.

Glare, like it’s associates – glitter, shimmer and shine – describes an optical event in which the surface of an object visually transcends its own boundaries. In this optical transcendence the object loses certainty of outline and form. The object is lost to the brilliance of its appearance. It is a process in which the act of looking produces its own dazzling specters. Within the haze of the glare, semblance and visual brilliance engages the viewer in a fuzzy, deterritorialised struggle to see. The viewer is presented with a shifting mirage – background and foreground overlap and the disorientation of the surface veils a perpetually shifting center in which the glaring object lapses into vibrant optic field.

Marx has informed her optic field from its literal counterpart, the surface of ploughed earth. The ploughed field as visual referent has a root in both Derrida’s reflections on the act of writing, as well as in litema, Sesotho for ‘field’, a traditional Sotho form of mural decoration. Basotho women generate litema on the outer walls of homesteads by ploughing their fingers or a comb into the wet top layer of fresh clay and dung plaster to create linear striations. Through the linear activation of flat surfaces these striations bring the homestead into an exaggerated relation to its environment, using the logic of camouflage and visual association. The movement of the sun and shadow, which is integral in defining architectural volumes, is now co-opted into performing the opposite. The striations diffuse the rigidity and flatness , light and shade create dazzling vibrating fields.

Marx traces object topologies to a shimmering point. Her repetitive linear horizontal line work, the considered colour studies, and subtle tonalities, weave a taught optical tension that lapses into the visual equivalent of the musical overtone. In fact, musical references abound in vibration, glitches, loops, counterpoints and frequencies. The paintings weave together atmospheric depths that do not rely on traditional perspectival illusions, in which depth appears to open into the suggested spatiality of the picture plane. Instead, a shimmering atmosphere appears to lift off the surface of the canvass, to hang in front of it, to activate the space between the flatness of the painting’s surface and the viewer’s attempt to fix it with a glare.

Maja Marx (b.1977 South Africa) has featured in South African and international exhibitions. Marx is a fellow of the Ampersand Foundation (New York/Johannesburg) and a participant of MAPS (Master of Art in the Public Sphere); an exchange between the Wits School of the Arts, Johannesburg, South Africa and the Ecole Cantonale d’art du Valais in Sierre, Switzerland. She has participated in the South African Pavilion of the Venice Biennale 2013 and recently collaborated on a presentation of REwind Cantata at the 62 Center for Theatre and Dance, Massachusetts.

Marx received her Masters Degree in Fine Art with distinction from the University of the Witwatersrand in 2008 and is currently living and working in Cape Town. This is her third solo exhibition with WHATIFTHEWORLD.