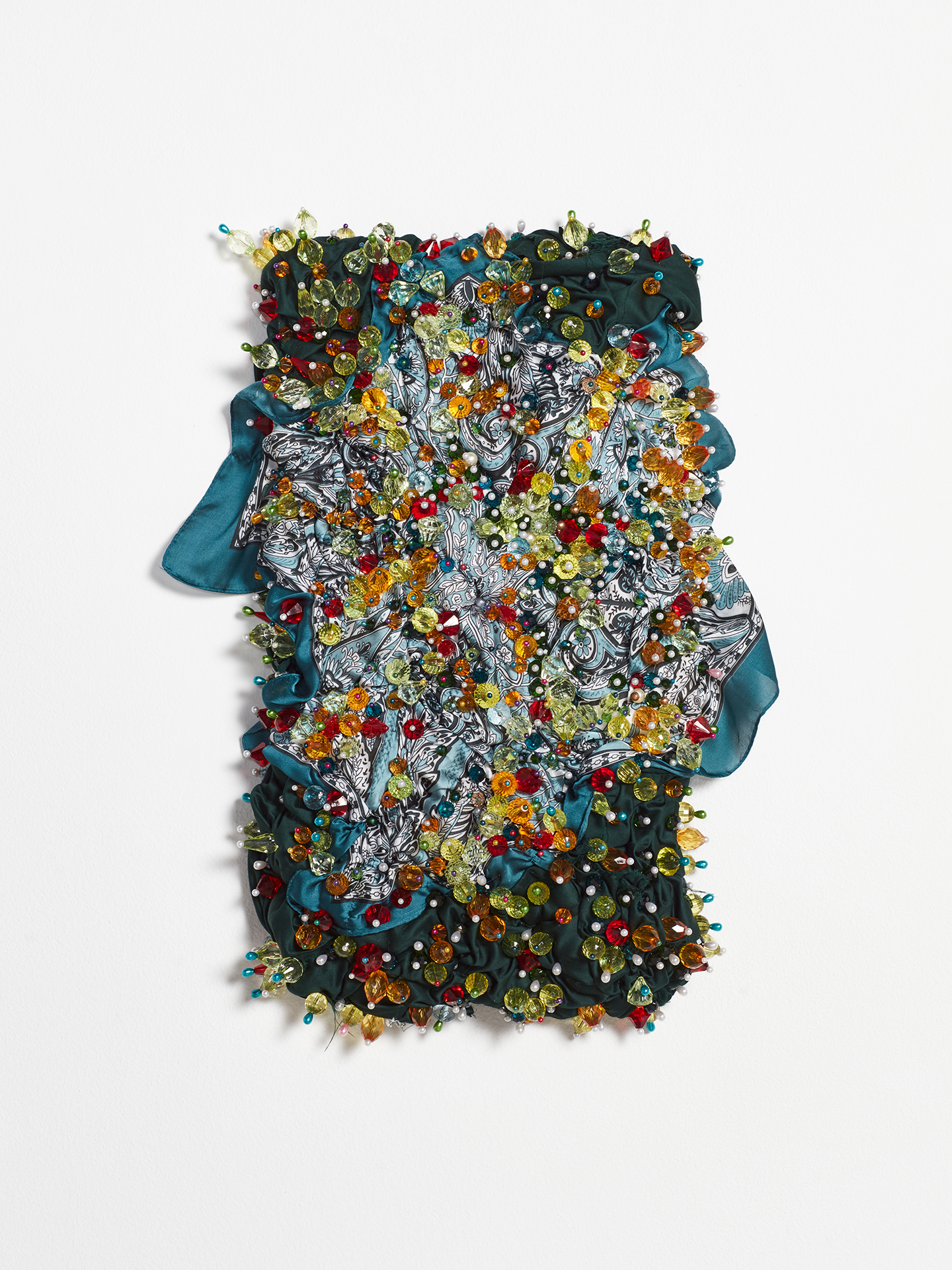 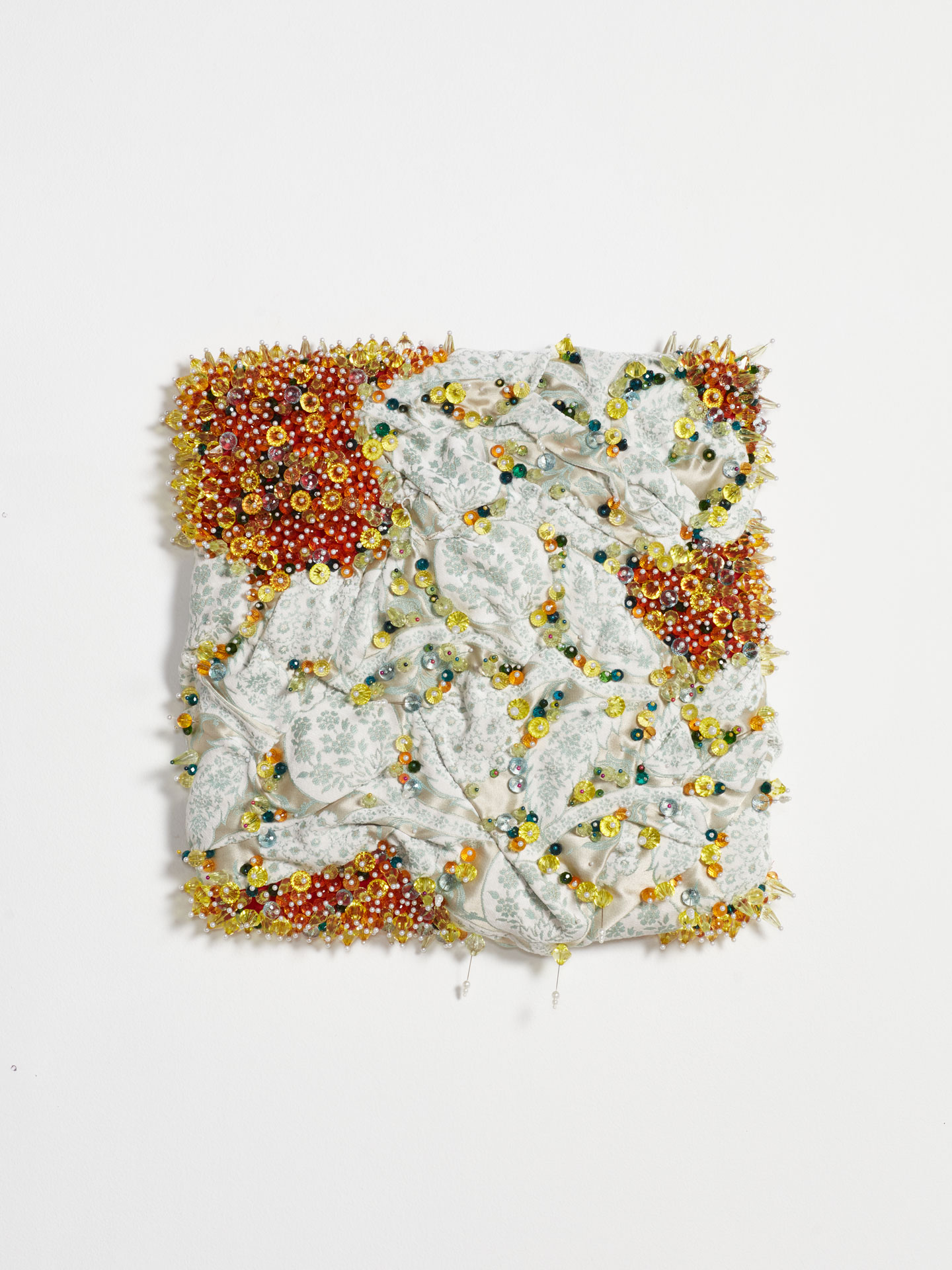 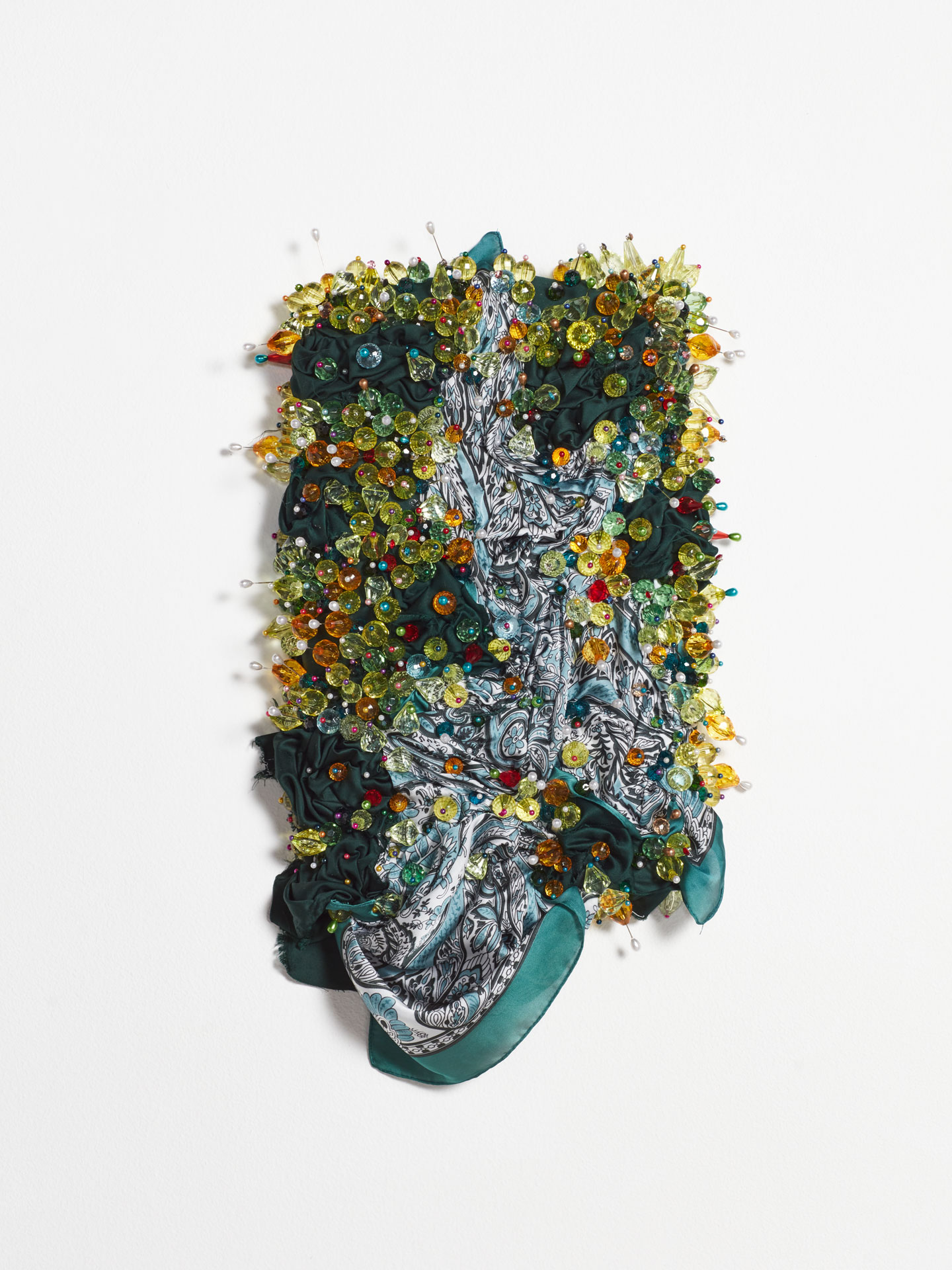 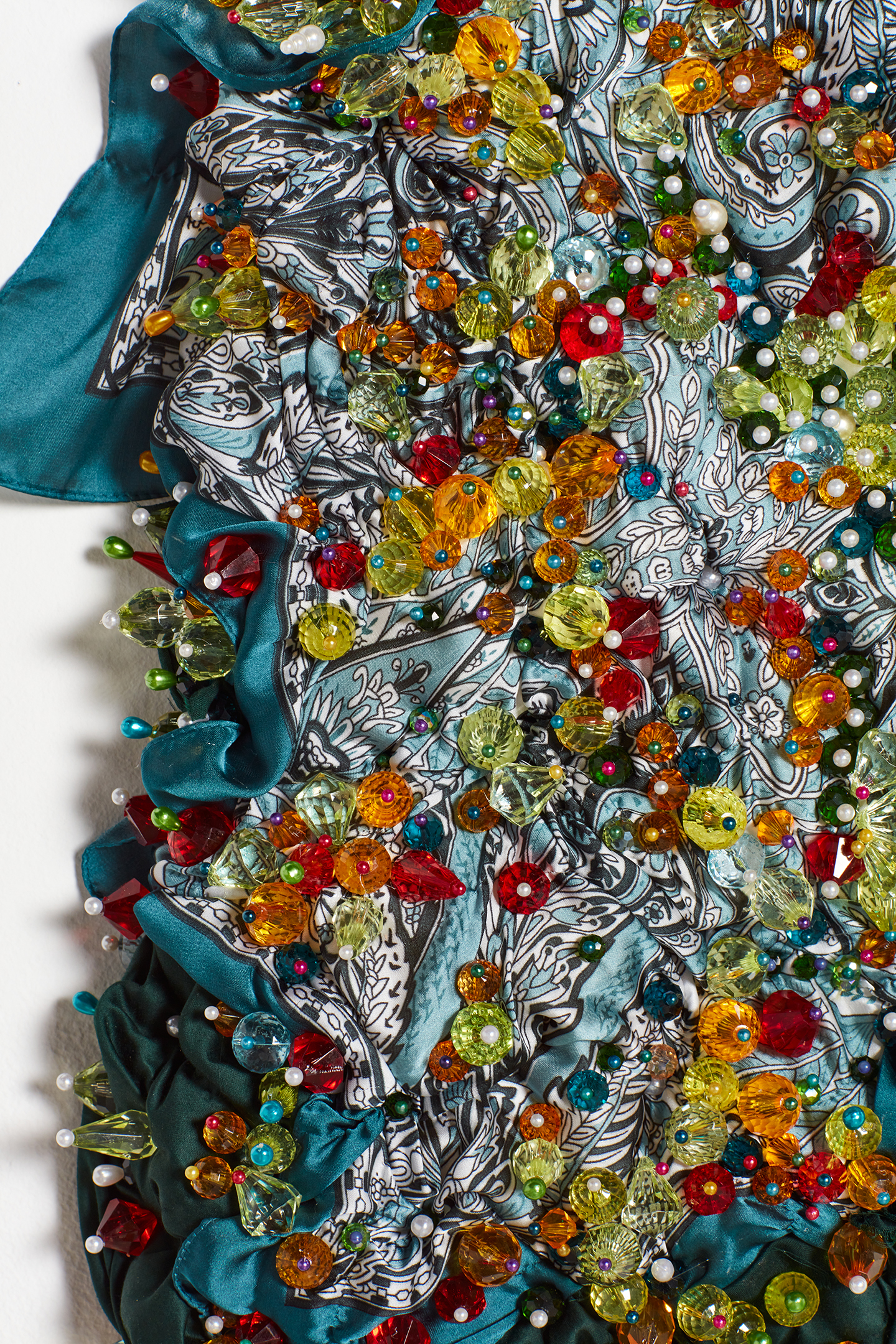 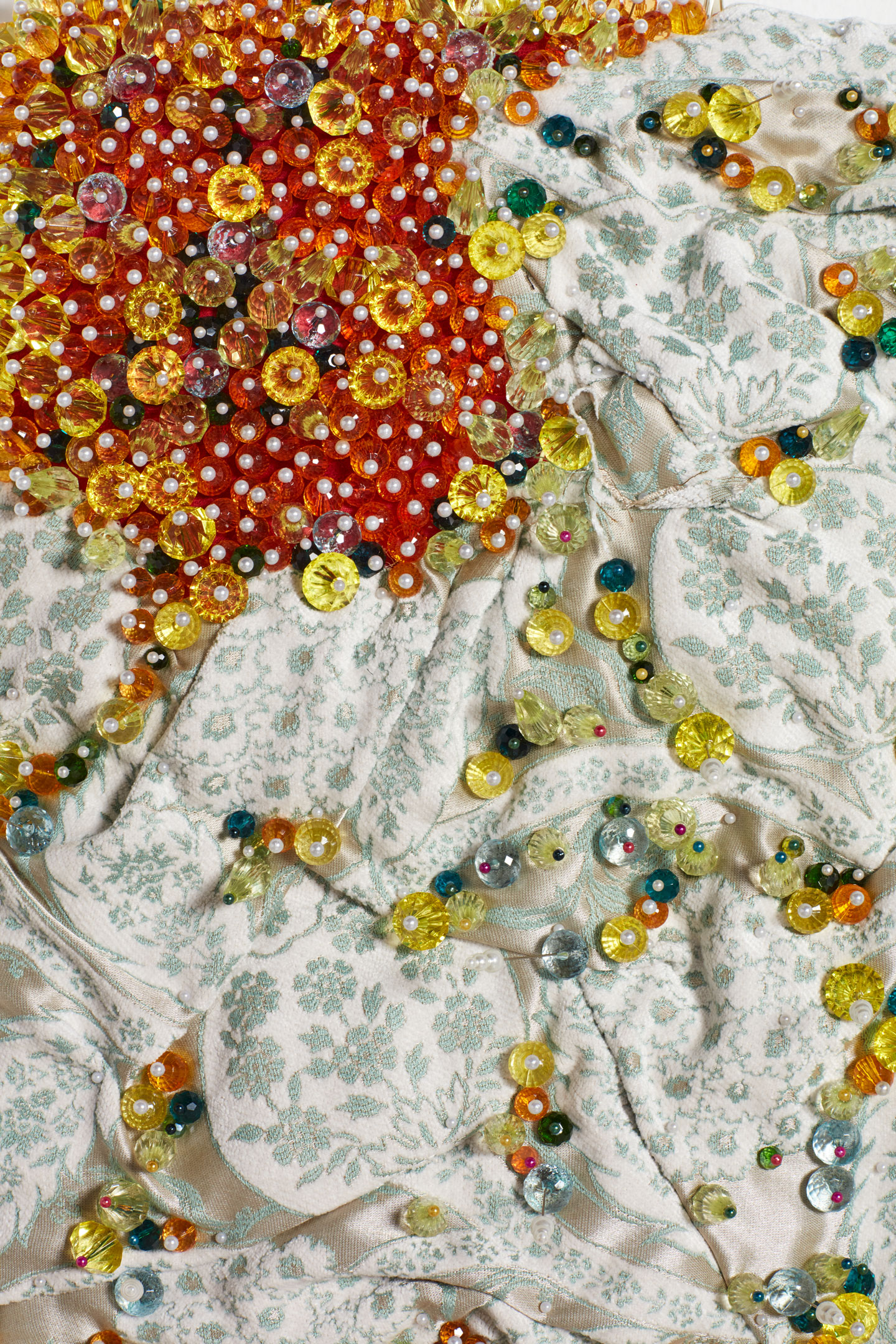 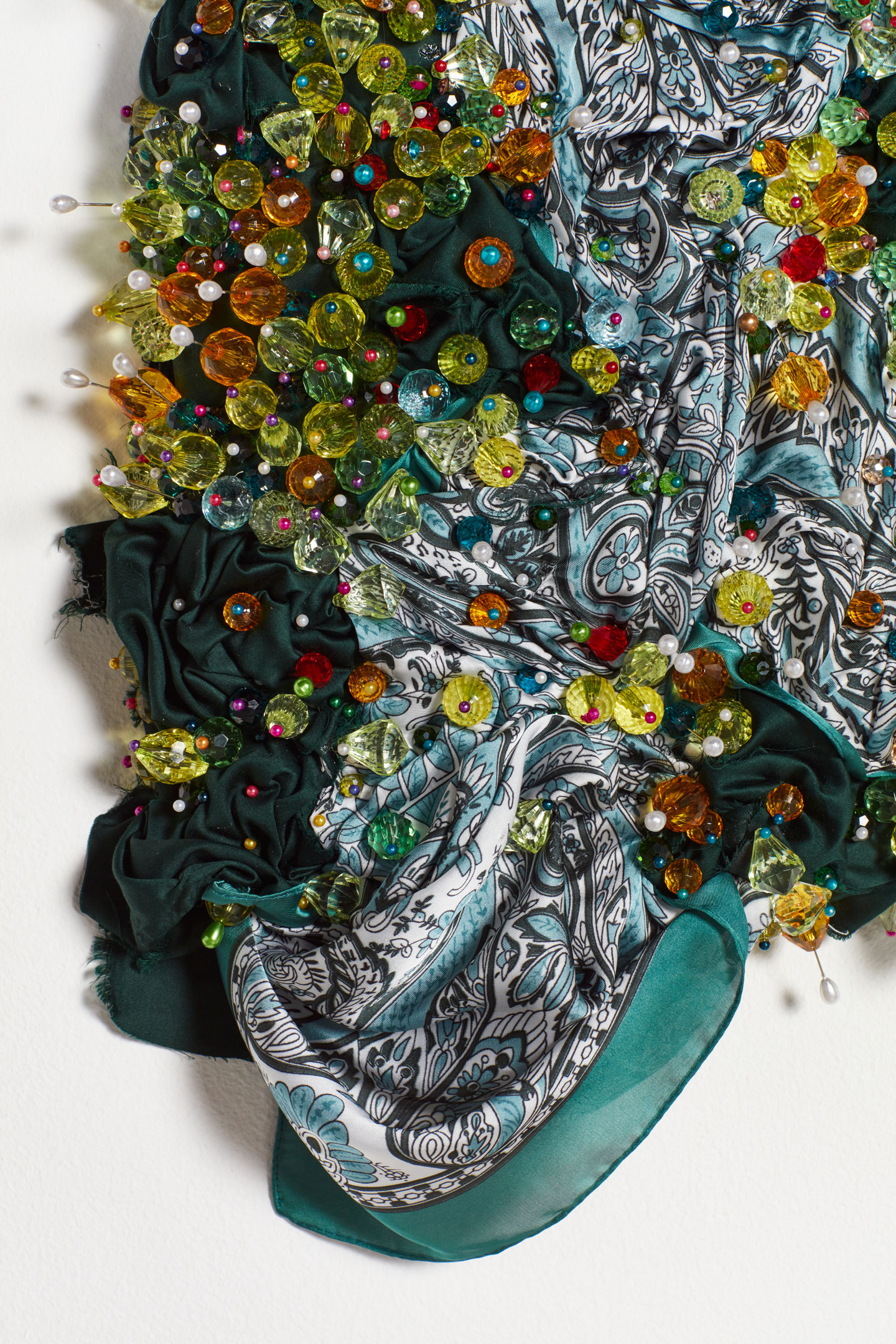 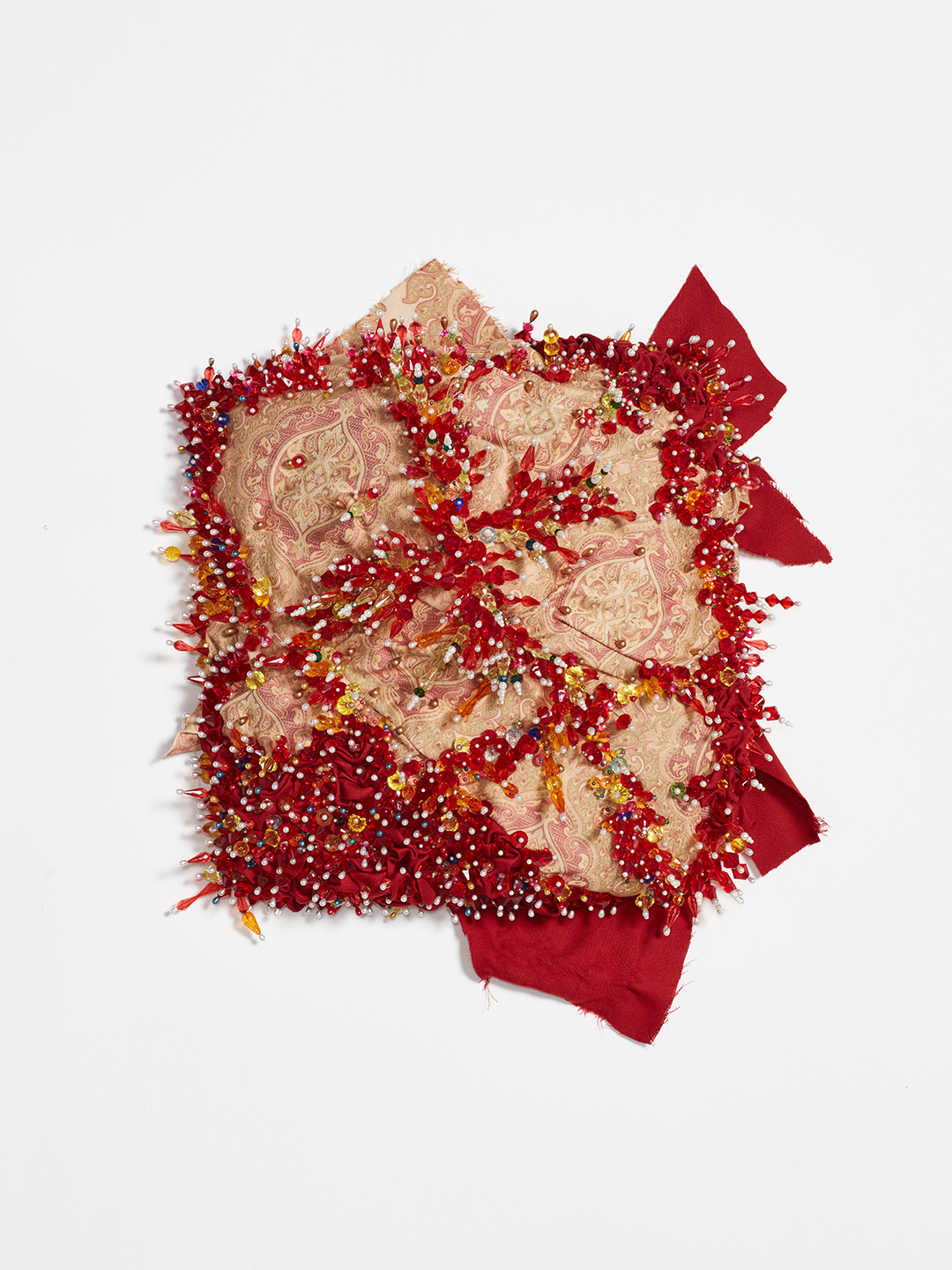 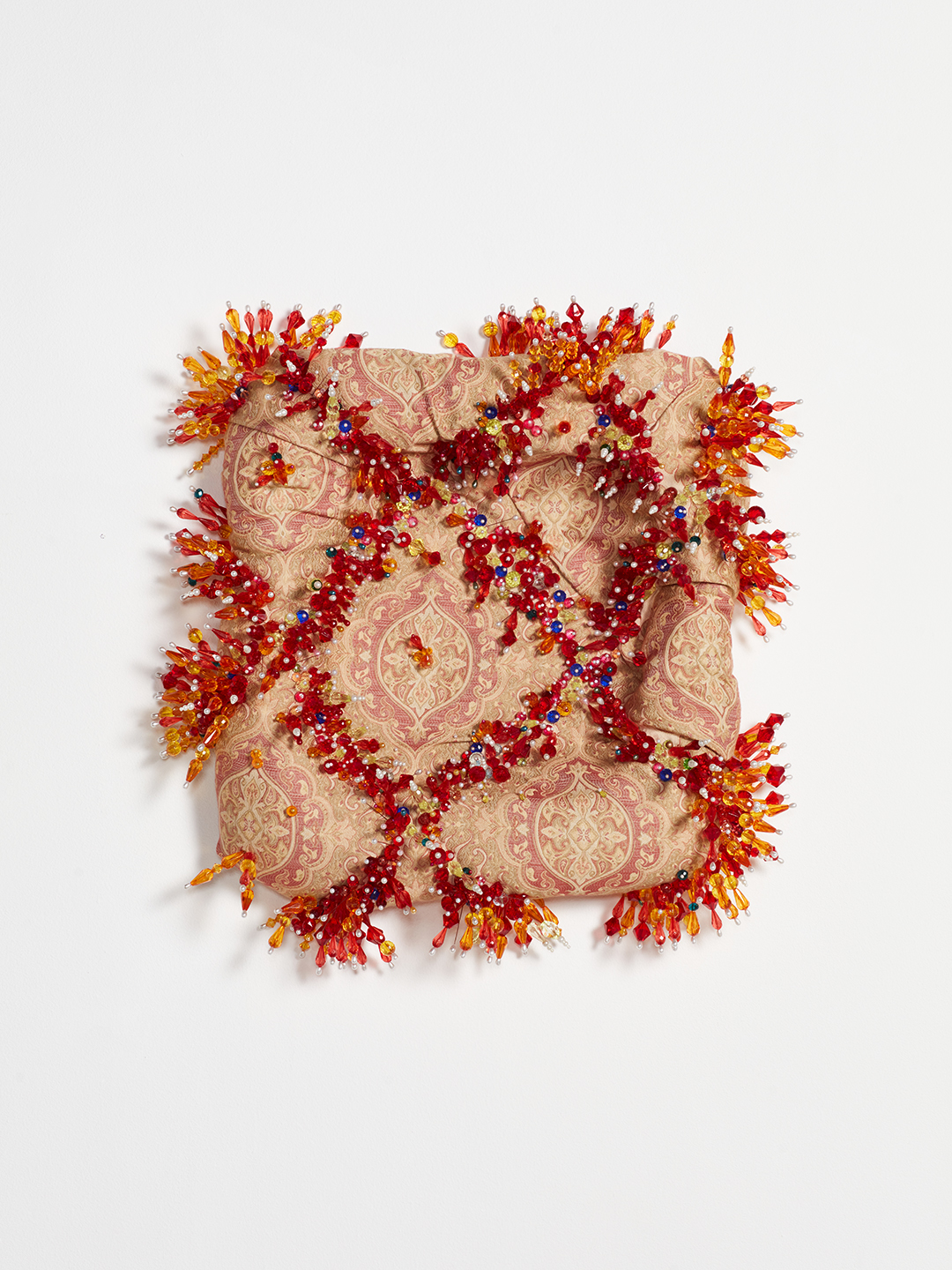 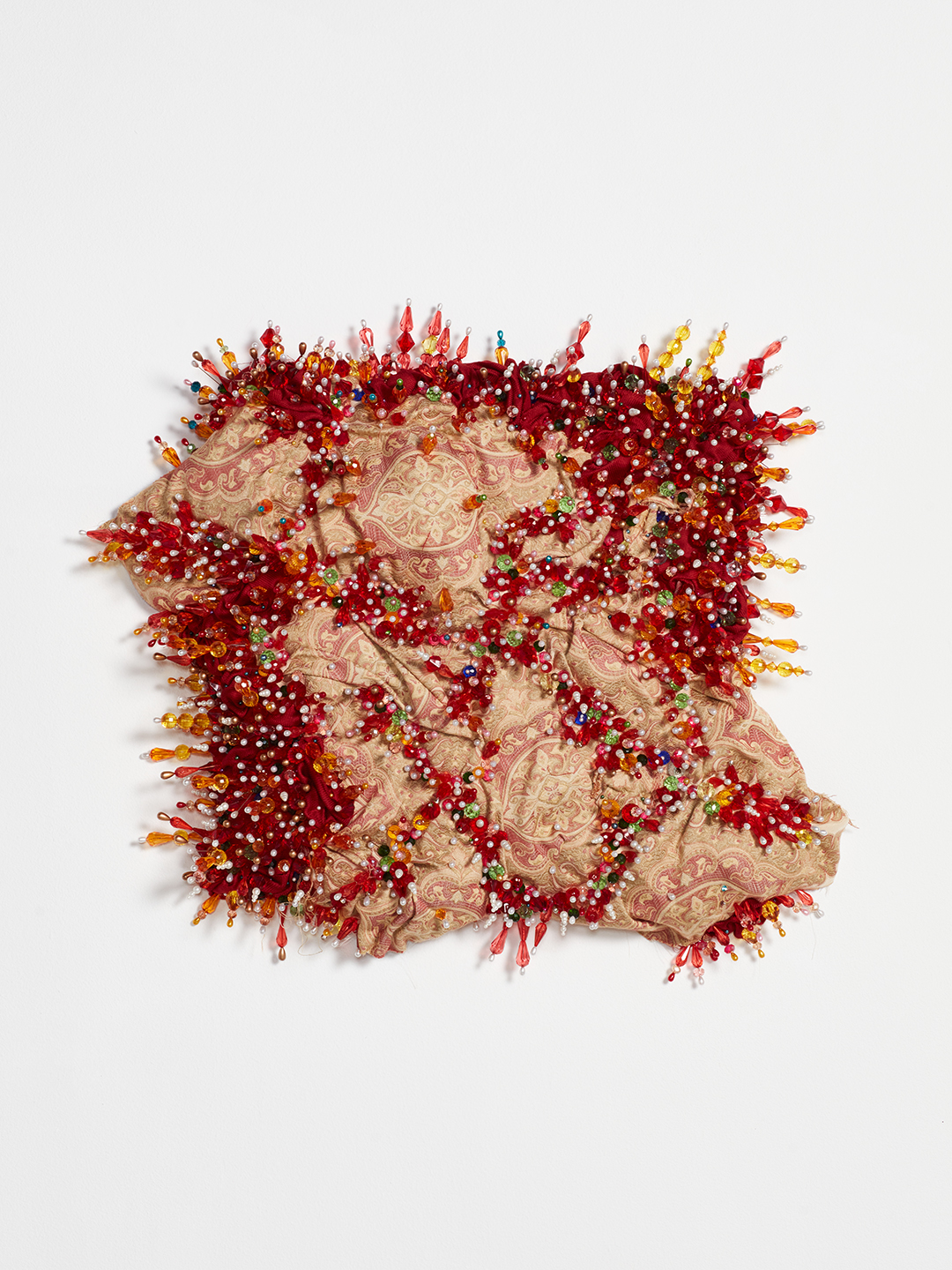 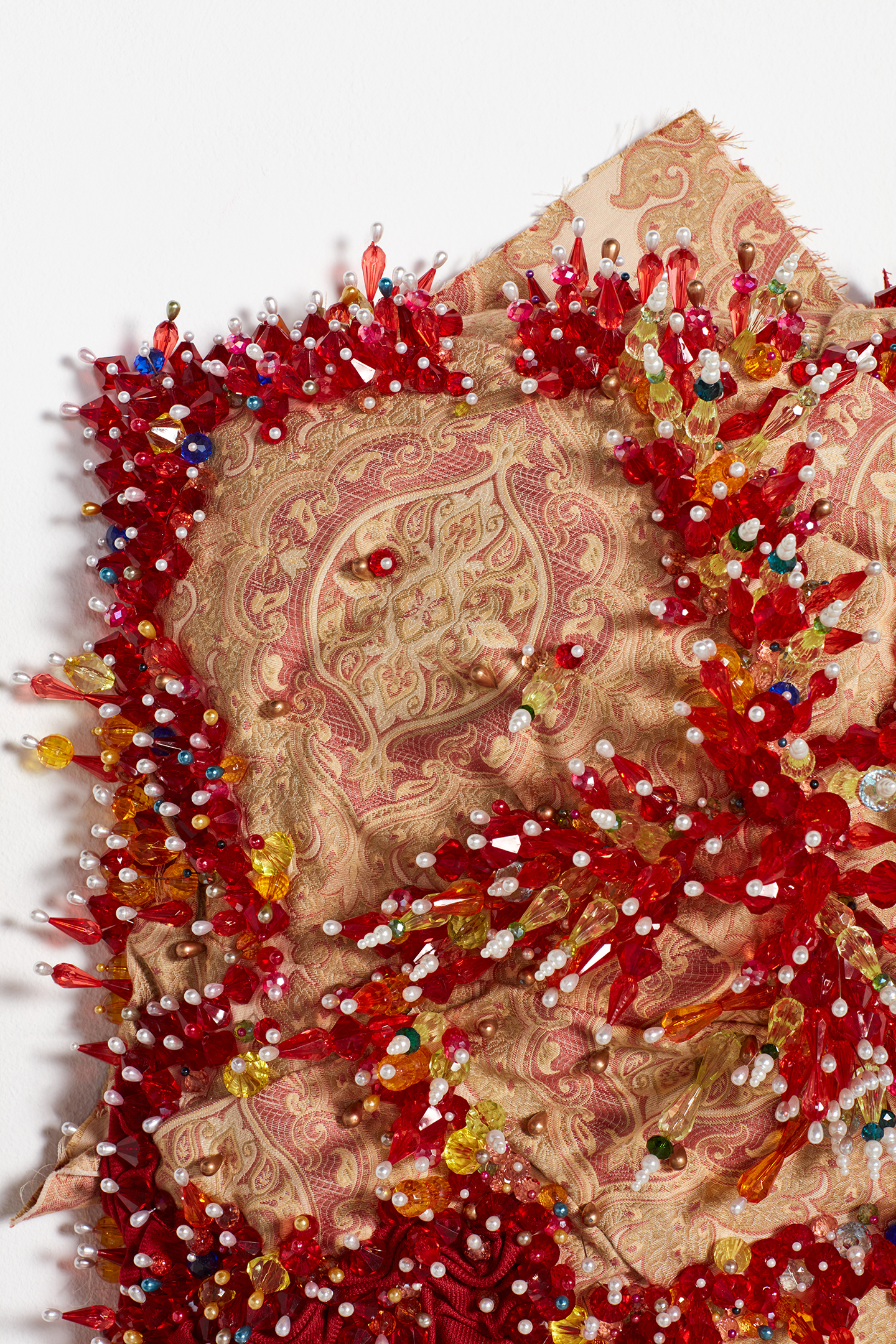 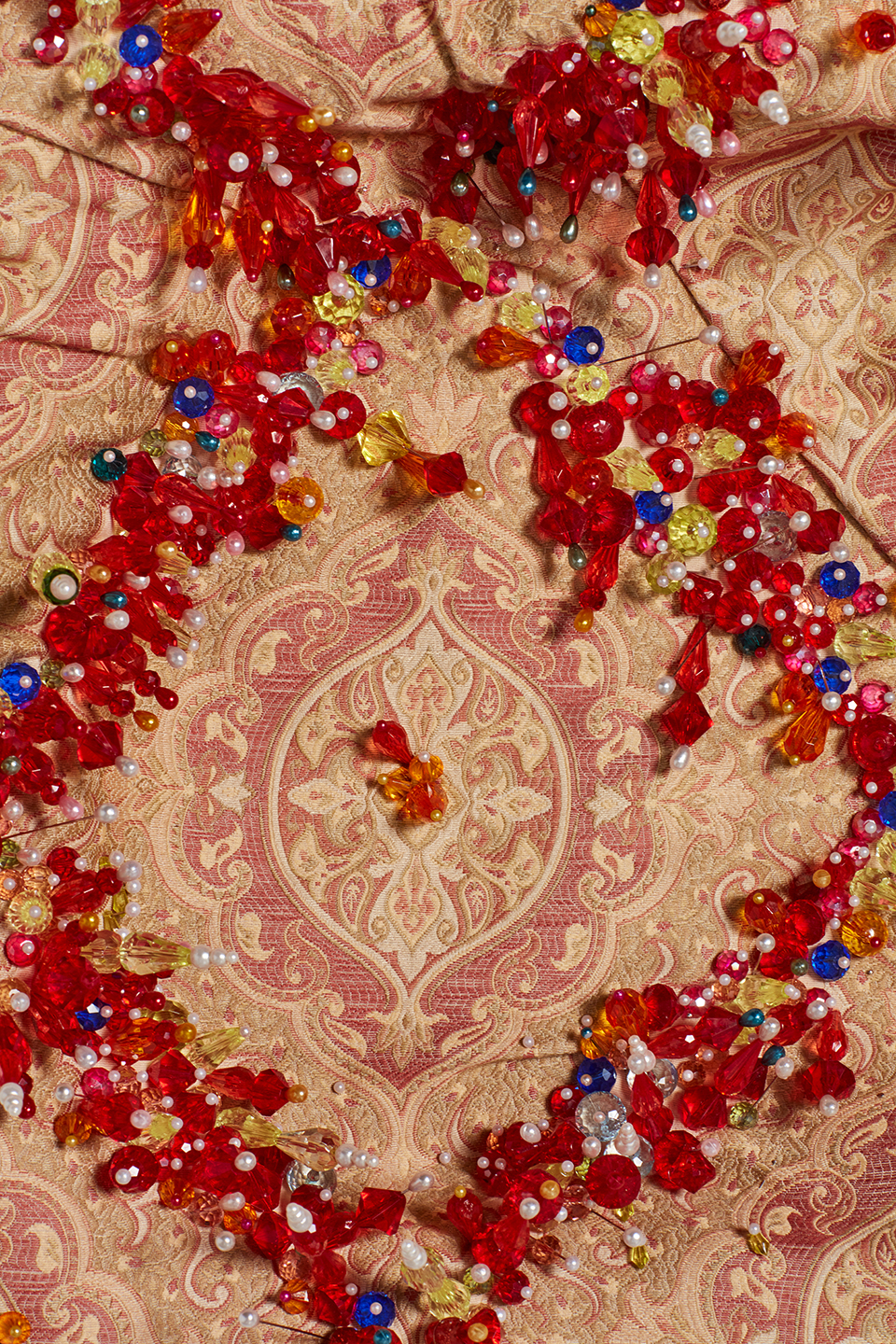 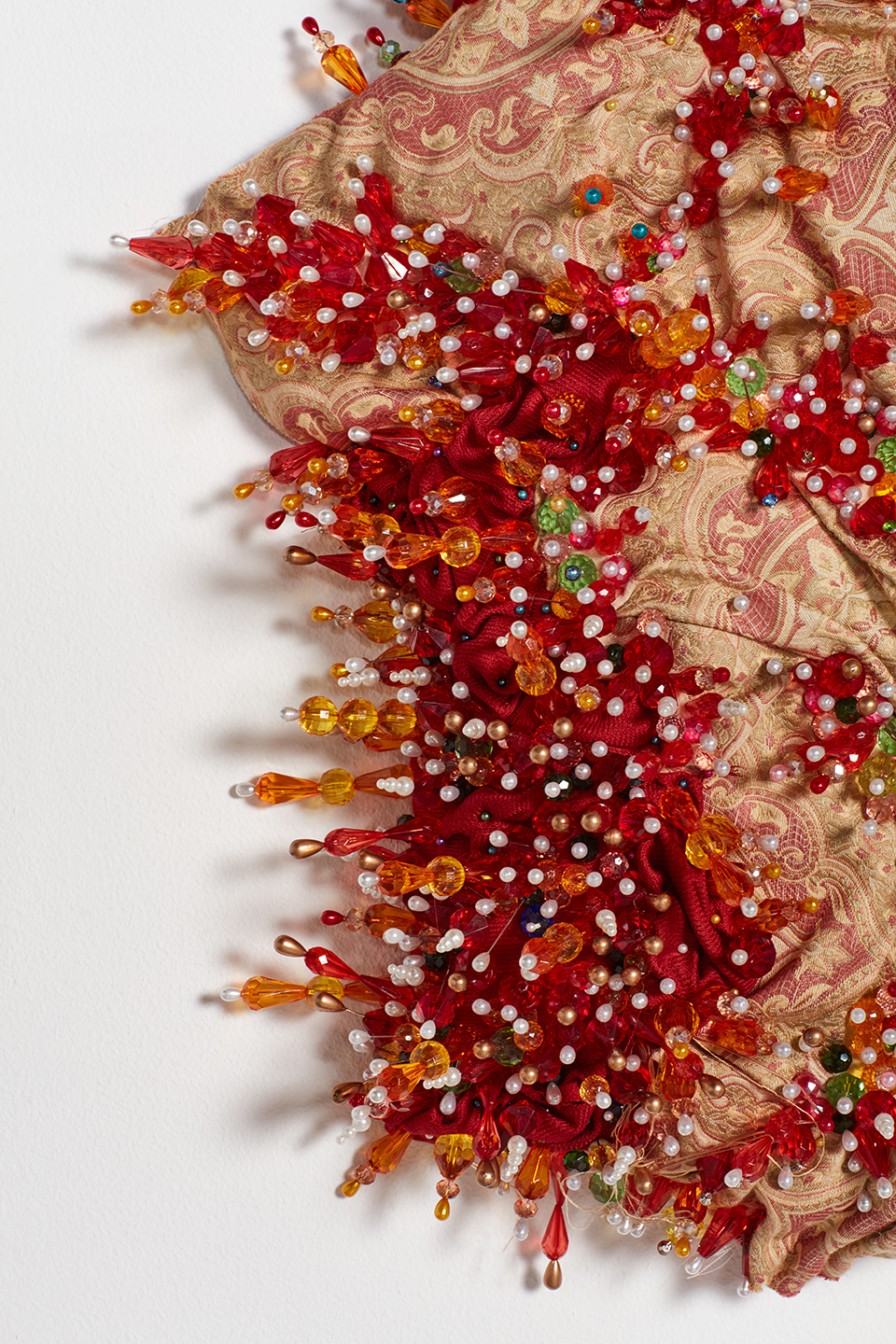 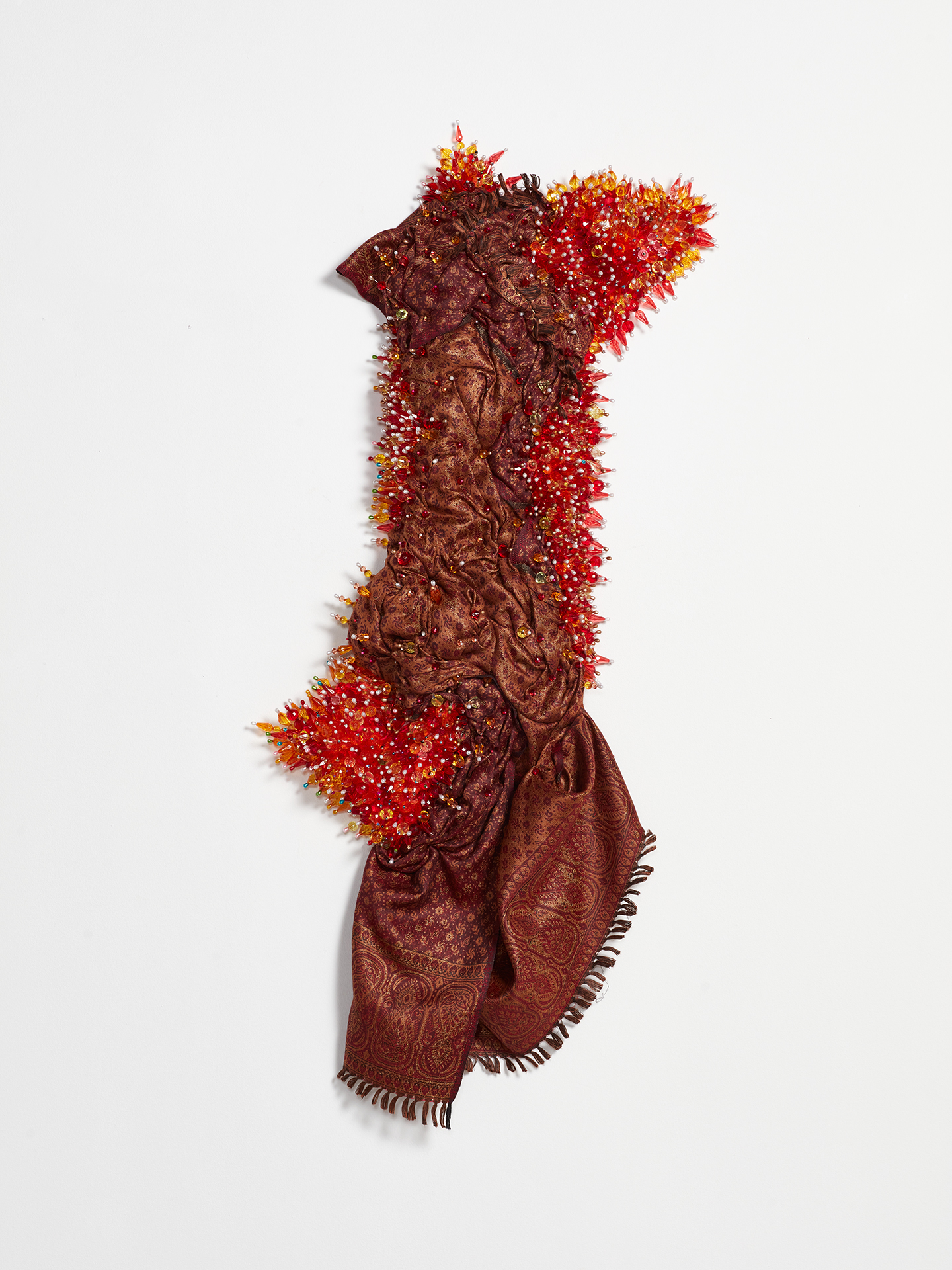 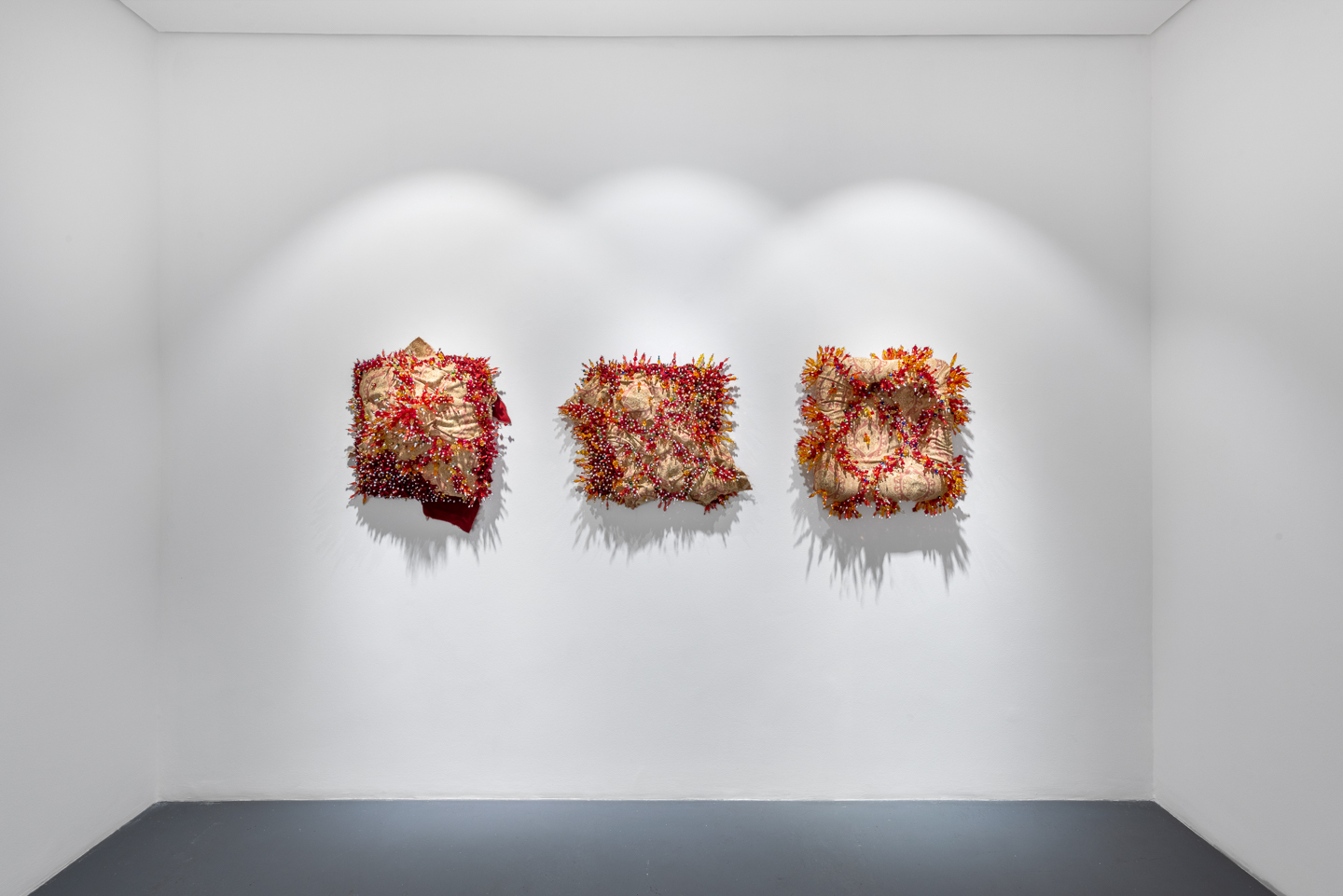 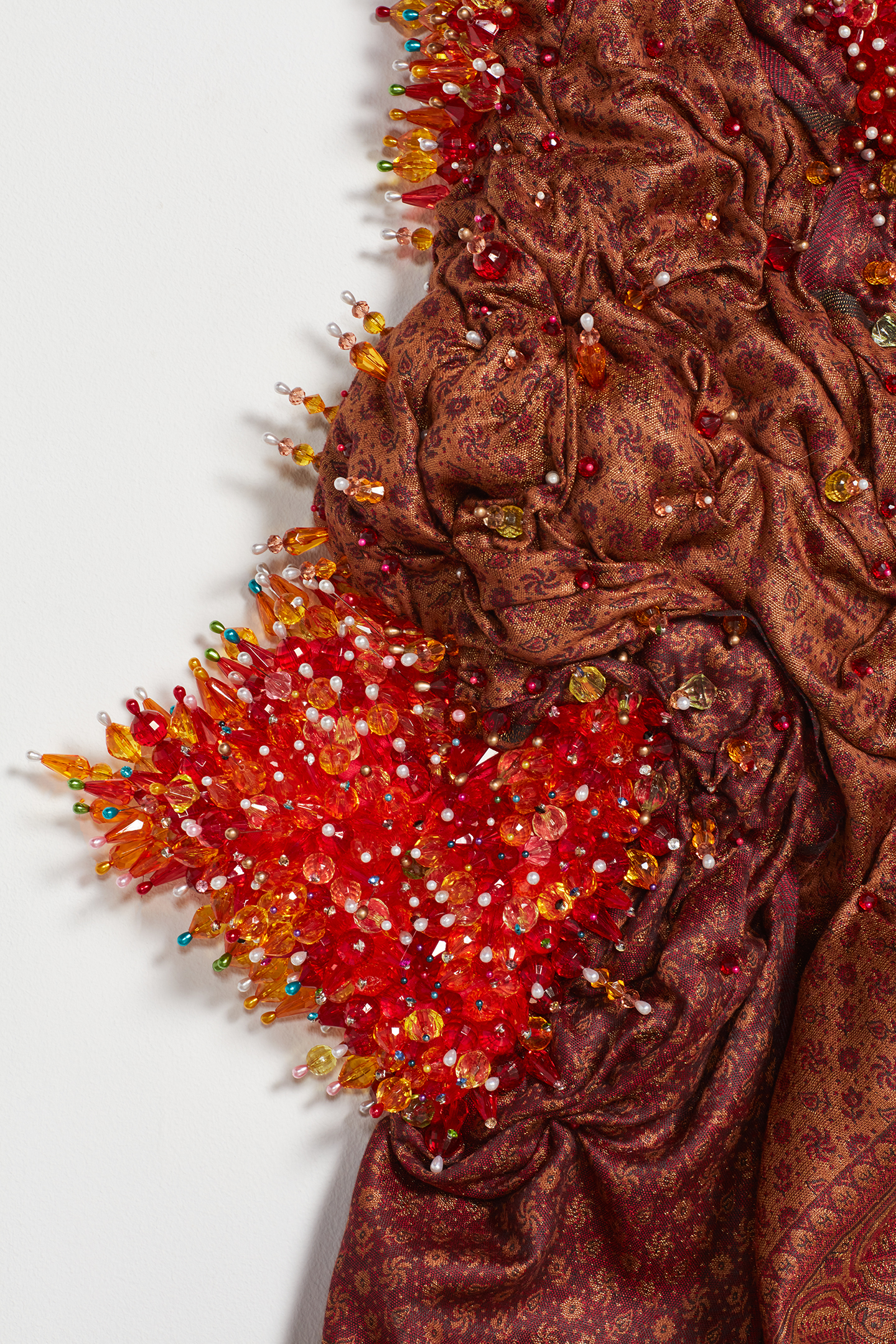 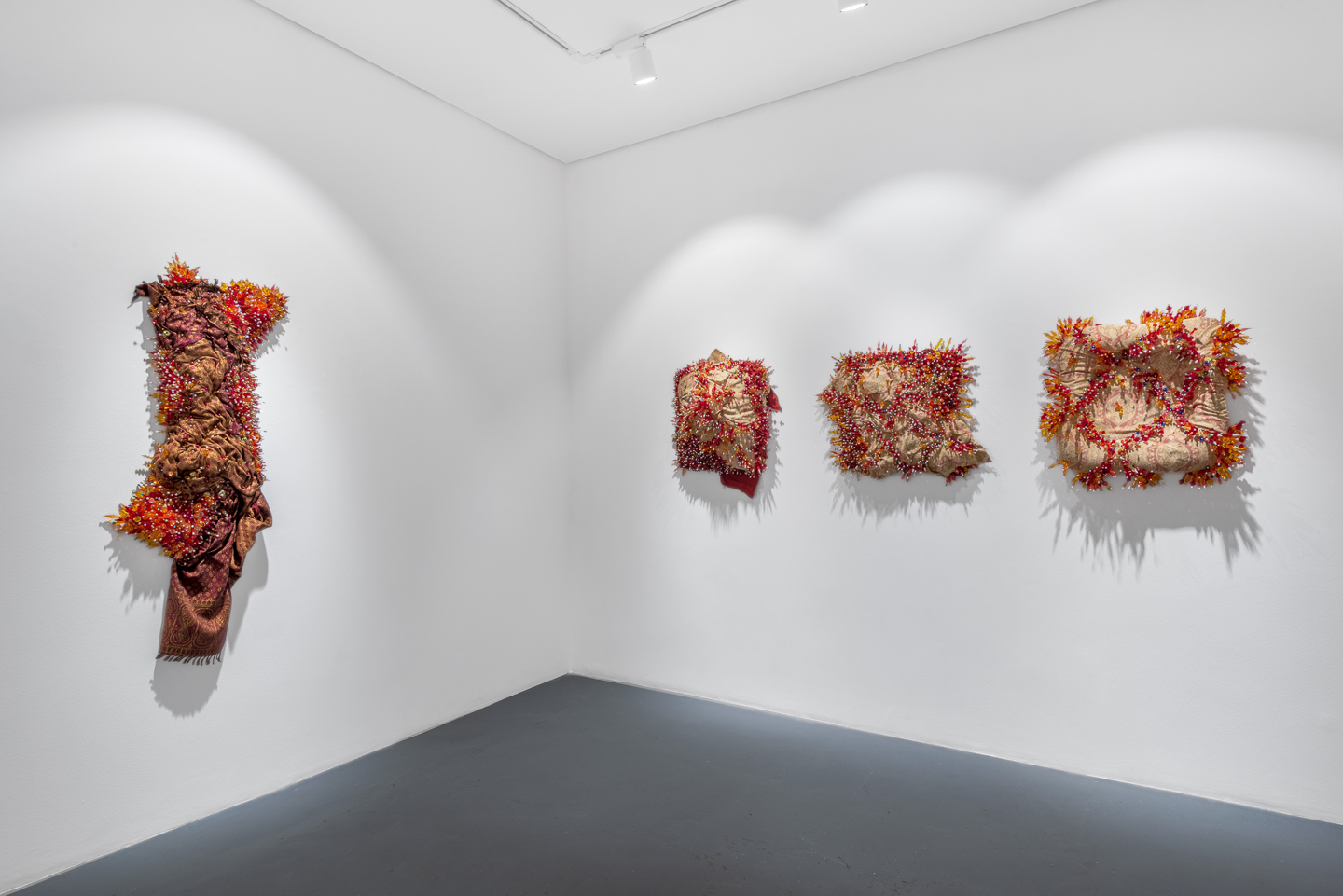 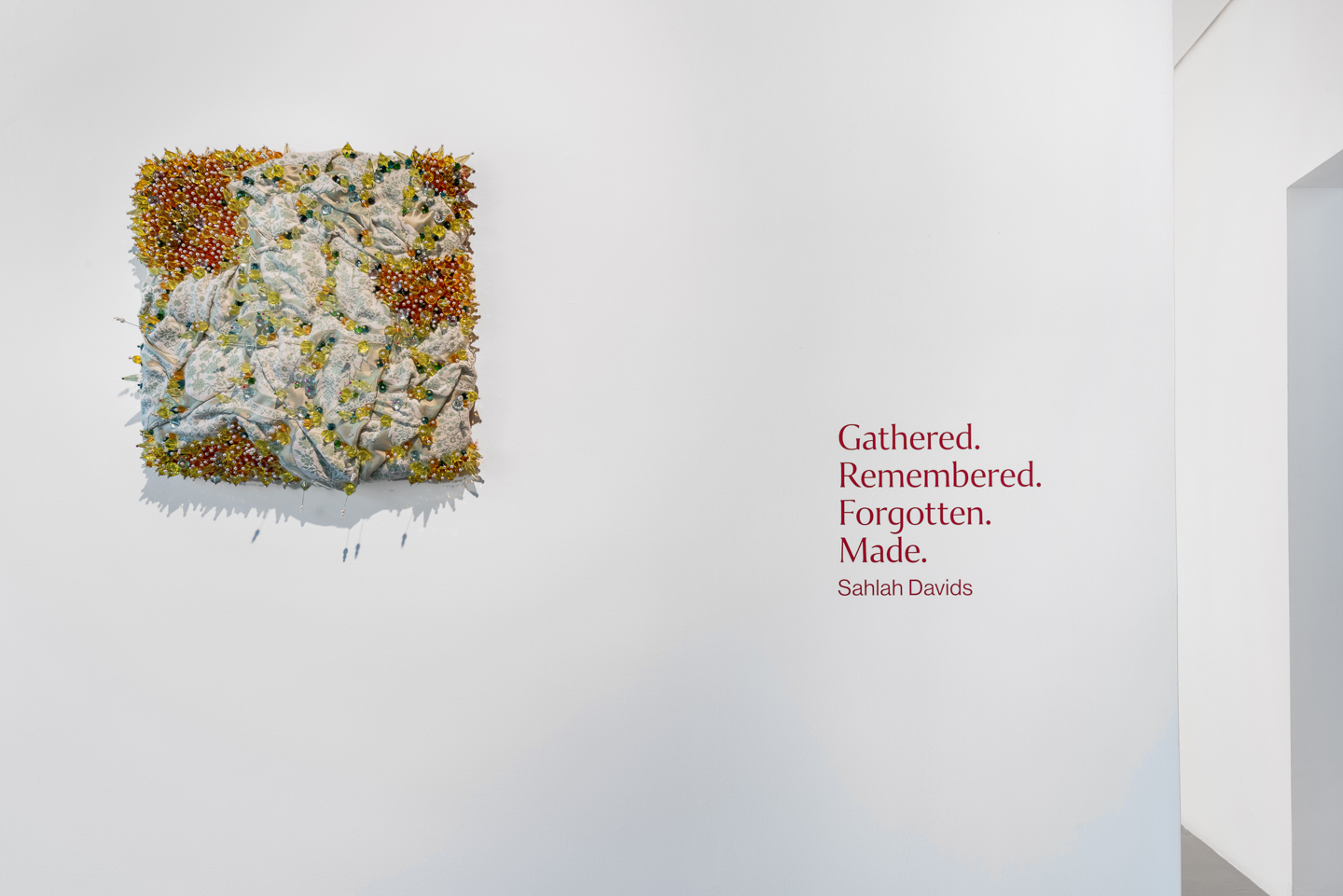 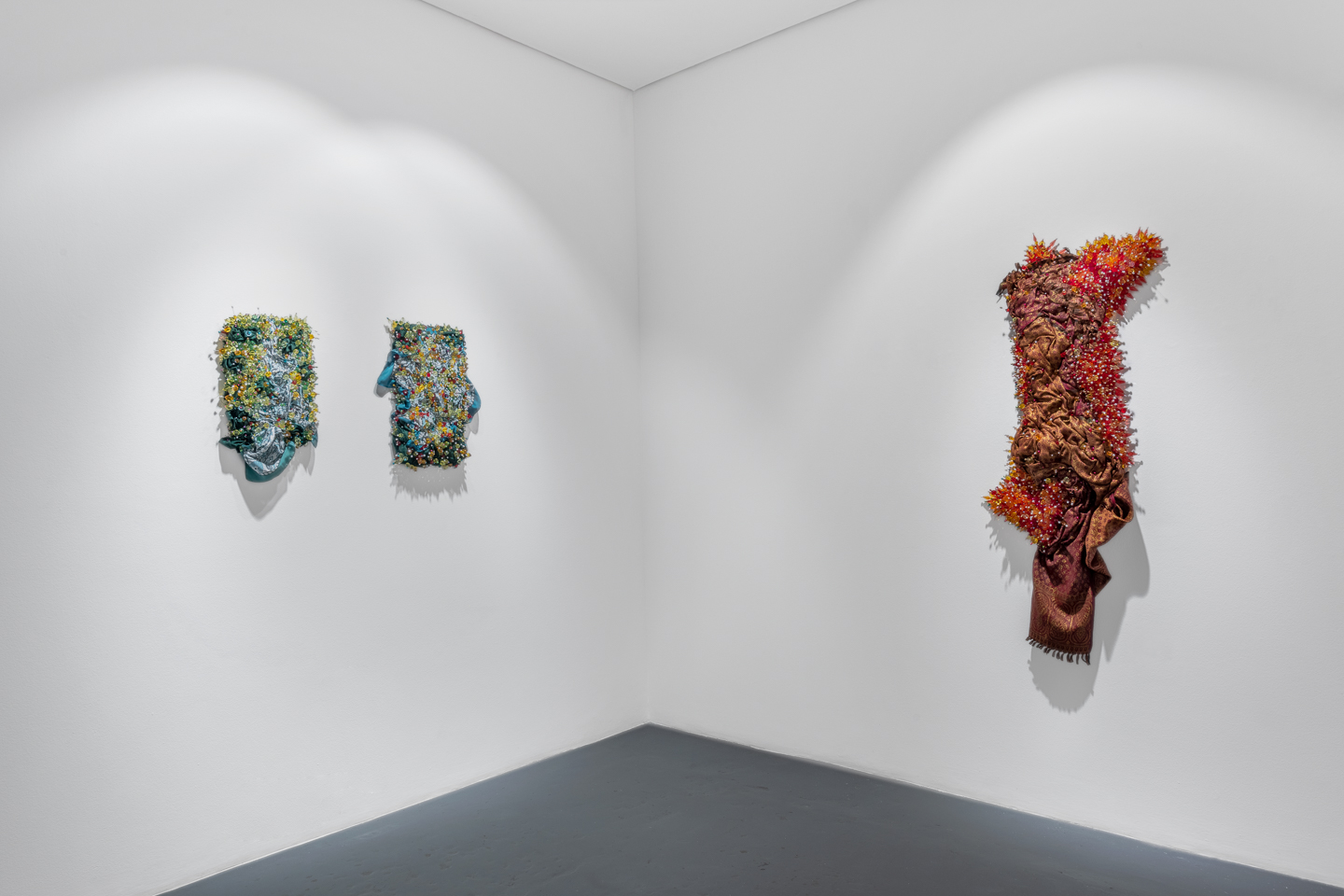 WHATIFTHEWORLD is pleased to present Gathered. Remembered. Forgotten. Made., a solo presentation by Sahlah Davids.

The bead, the pin and the ruching of fabric – stem from the familiar, a reflection of an internal muscle memory. At times, I don’t know, sometimes I do. Endlessly influx, woven together with stories of moving plights, heart-wrenching adversity, uncomfortable truths and unbelievable triumphs.

I asked Ouma how she came to be a seamstress. Its purpose imbued from a story of struggle and dispossession of which apartheid shaped. At 16 she was told that she could no longer complete her schooling. The apartheid system pulled apart her family, and forcing her to grow up, to age beyond her years before her time.

Disheartened by the fact that she couldn’t complete her schooling, and with no choice afforded to her.

My Ouma vowed that whatever she was expected to do, she would invest herself within it.

This meant she had to learn and teach herself how to become a seamstress. The profession, a layered and complex one. My Ouma’s profession was one she adopted, similarly she became with this adoption a prover for those she loved, her devotion to their security enabled her to pursue such a journey, at so young an age.

The bead, the pin and the ruching of the fabric become an assemblage of these memories. A memory that many can relate to – the “coloured” as the artisan, the tailor, the carpenter, and the seamstress. A shared profession of plight and adversity, but also a position of power and strength that many women of colour have stepped into throughout their lives. Through a sense of materiality, each object holds meaning. The pin that hurts but binds, the upholstery foam and material as a true reminder of a place called home, and the scarf serving as a symbol encompassing all her culture and the essence of her identity. These emphasize The distortion, abstraction, allowing the materials to be almost engulfed by the bead acting as a growing realization of what it means to exist generationally within the aftermath of apartheid

Delving into the mediums of textiles and beadwork, mixed media artist Sahlah Davids, uses her heritage and strong affiliation to the realm of religiopolitics to sow the seeds of her creativity.  Since completing her bachelor’s degree in Fine Art at the University of Cape Town in 2020, Sahlah has pursued the intricacies of culture and politics within the field of art and their relationship as one. Thereafter furthering the search for connection between these elements and the curation of pieces that embody it. Through this plight began the creation of the foundation that her work is built on today. Cape Town born and raised, Sahlah has described her methods of creation as the product of the blended learning and trades of the Cape Muslim community specifically the elders within her family. It is within the domestic, traditional and religious spaces that Sahlah draws on the skills of her lineage, the history of their struggles and ultimately the embodiment of their spirituality.

Sahlah Davids has since used these memories, observations and conversations to empathetically curate the pieces in her current body of works.  A collection that has been resolutely imbued with the traditions and culture along with the painful struggles of her community. The beauty of her collection is captured in the details of embellishment and the hues of rich colors, yet the disfigurement of each piece contrasts harshly and reaffirms the grotesque realities of systematic trauma and the complexities of the past as experienced by a Muslim living in the Cape. Sahlah is currently completing her Master’s degree in Urban Design, in hopes to combine her streams of research and artistic practice in creating community orientated city spaces with human and ecological needs at the forefront.