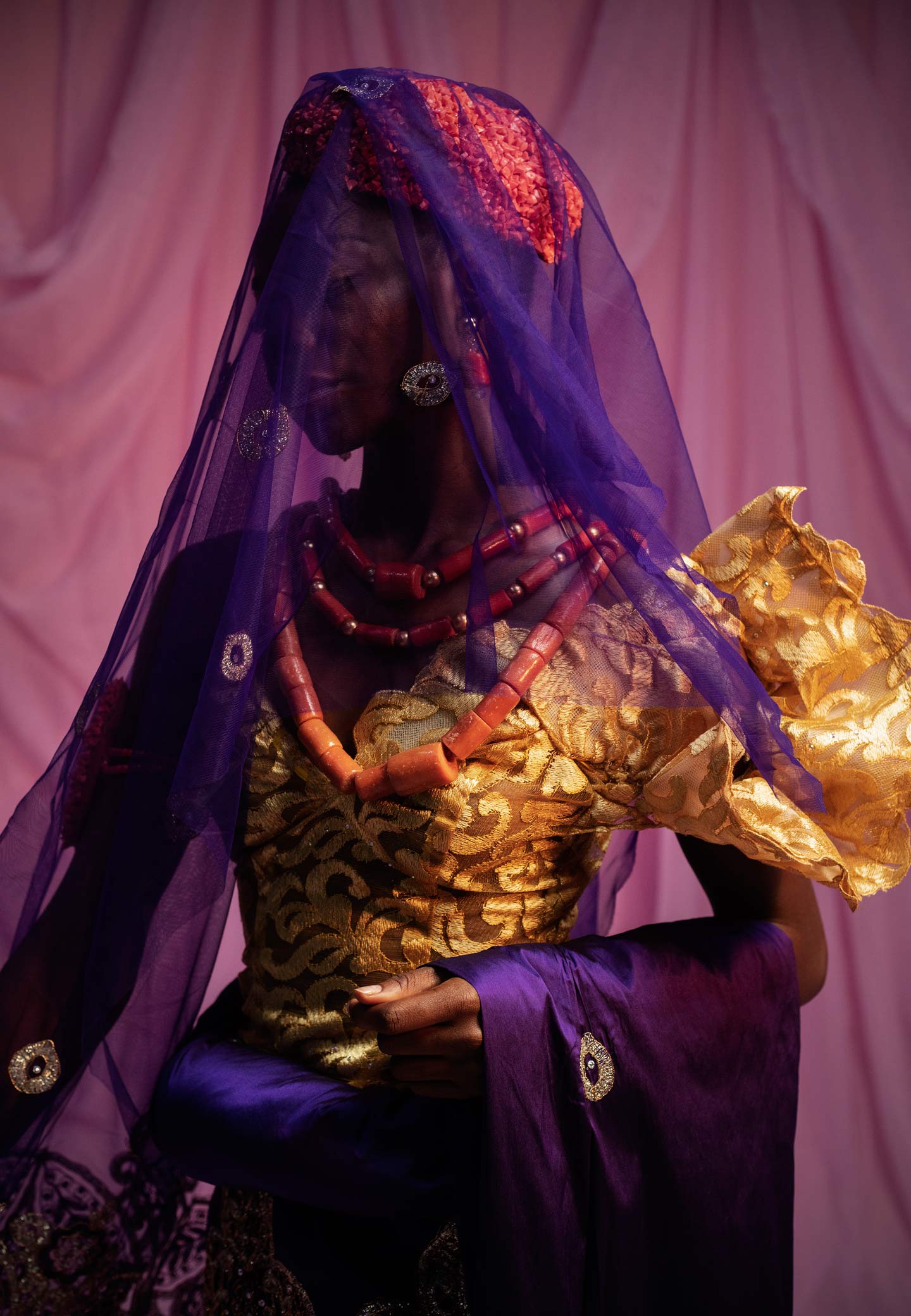 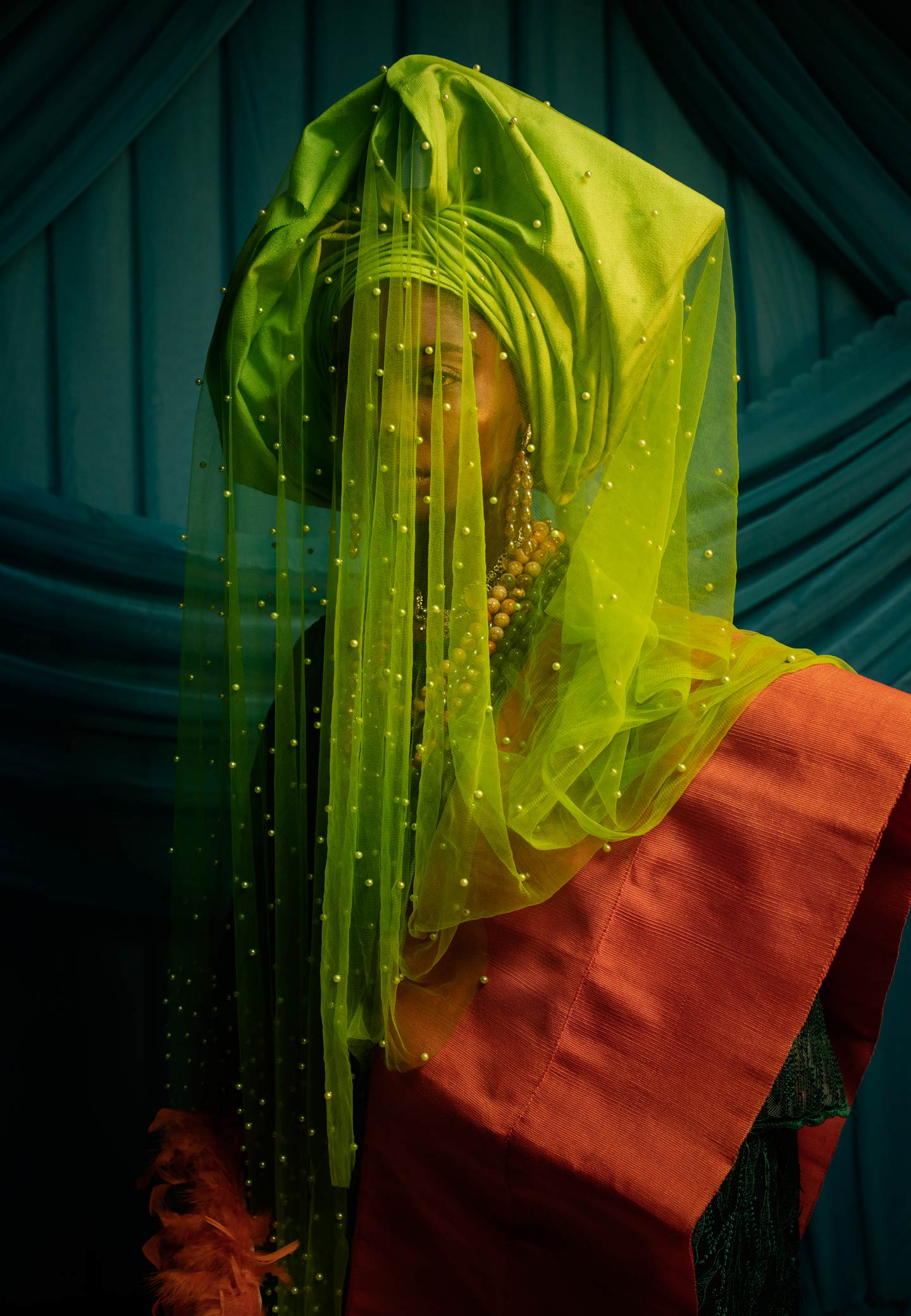 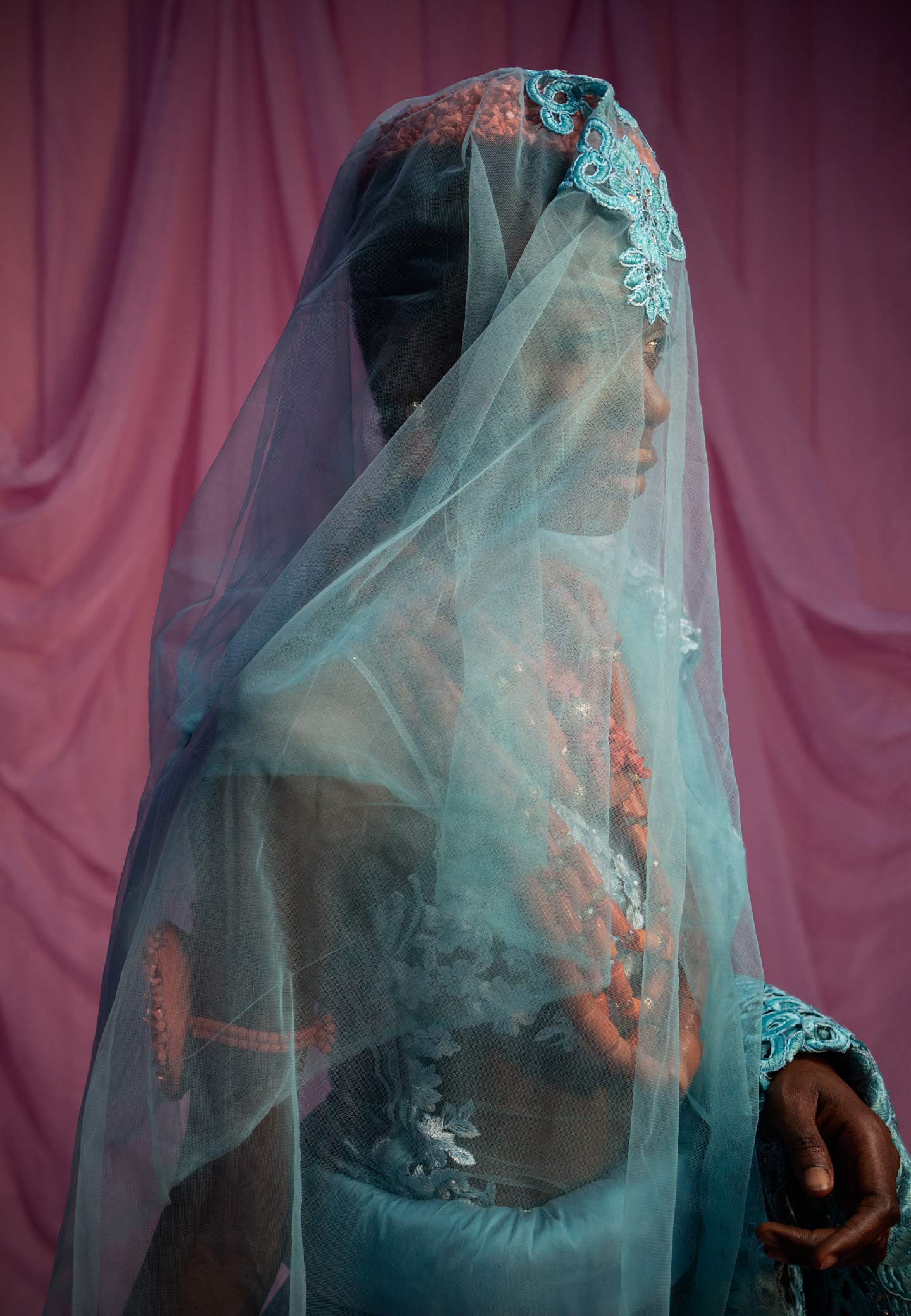 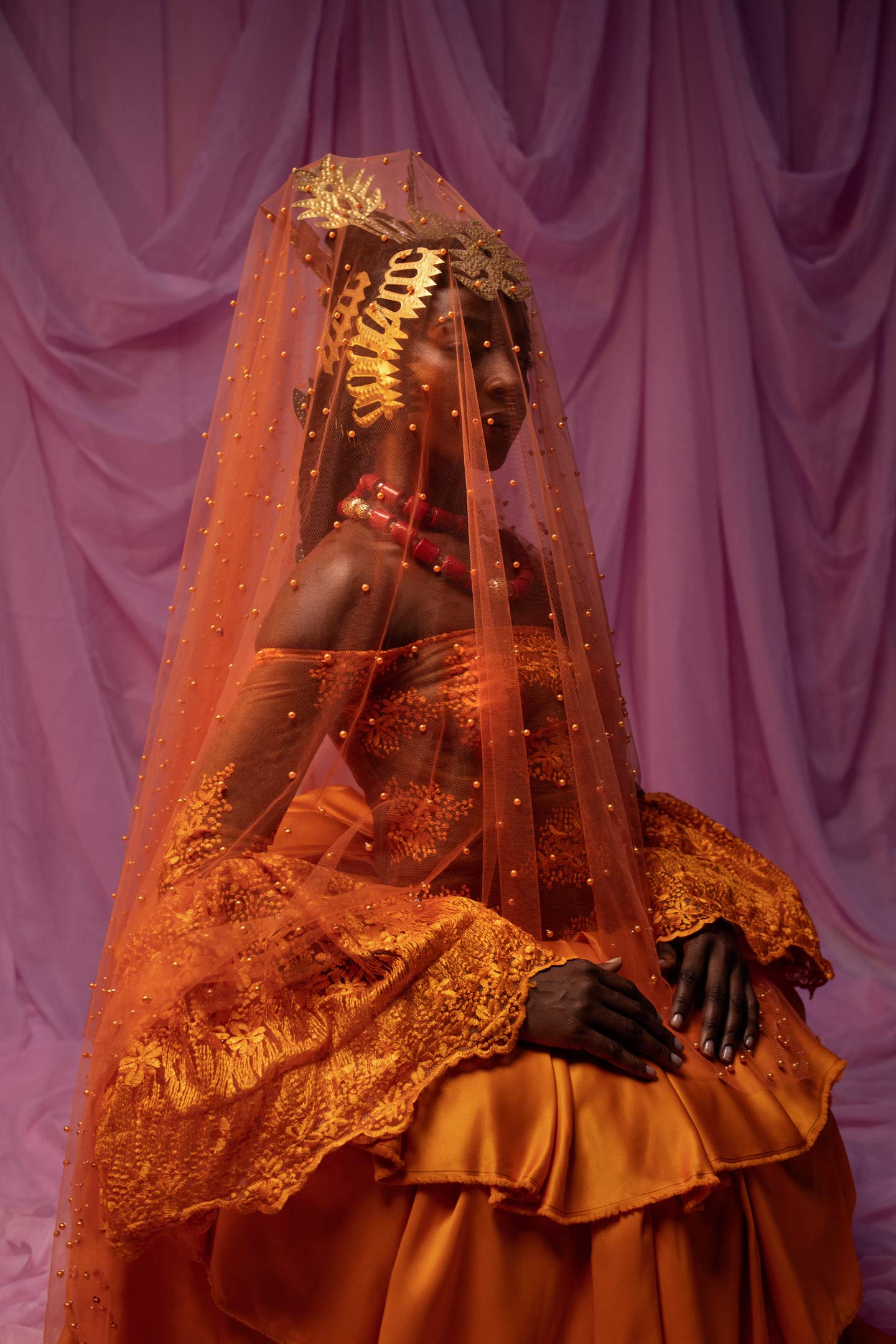 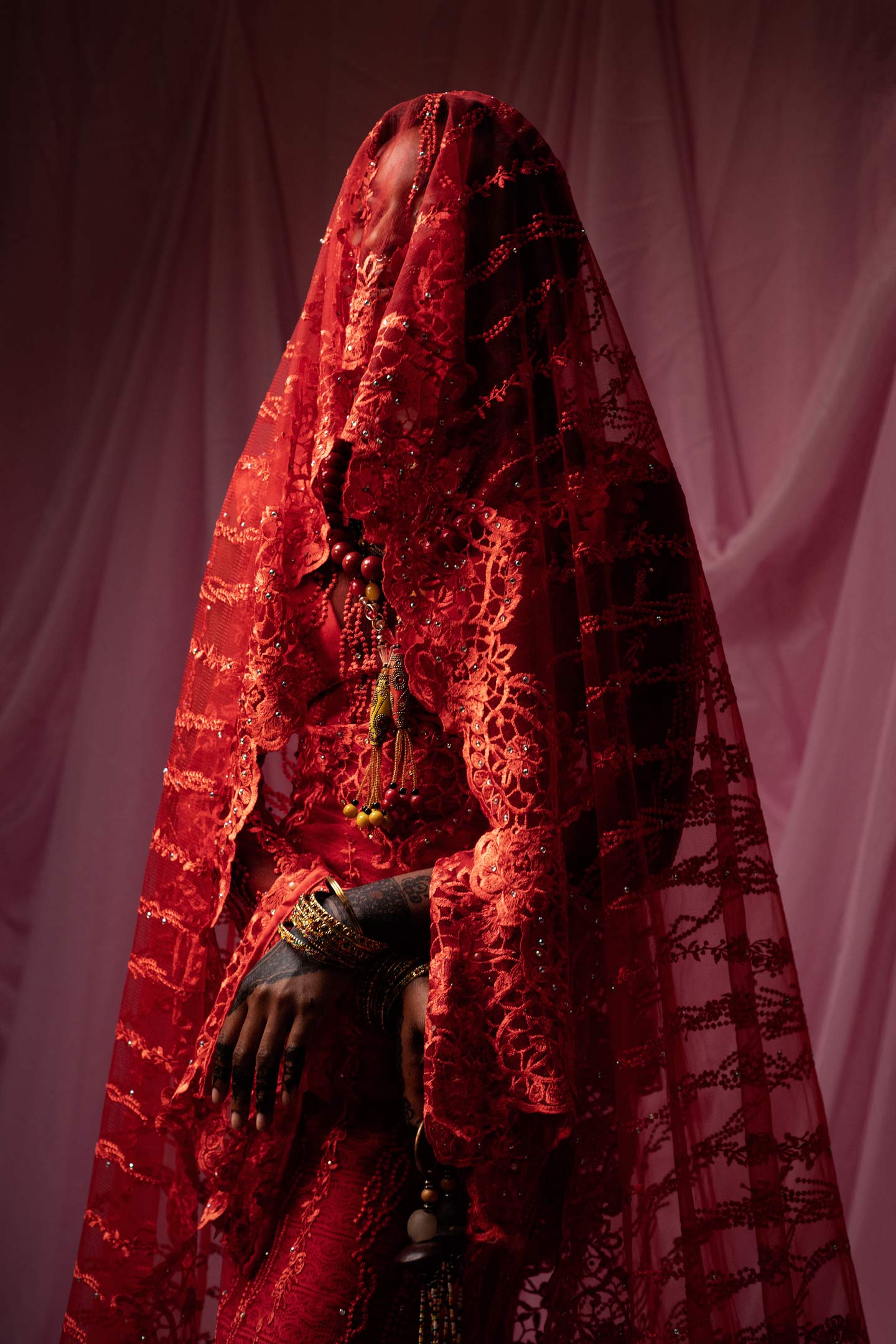 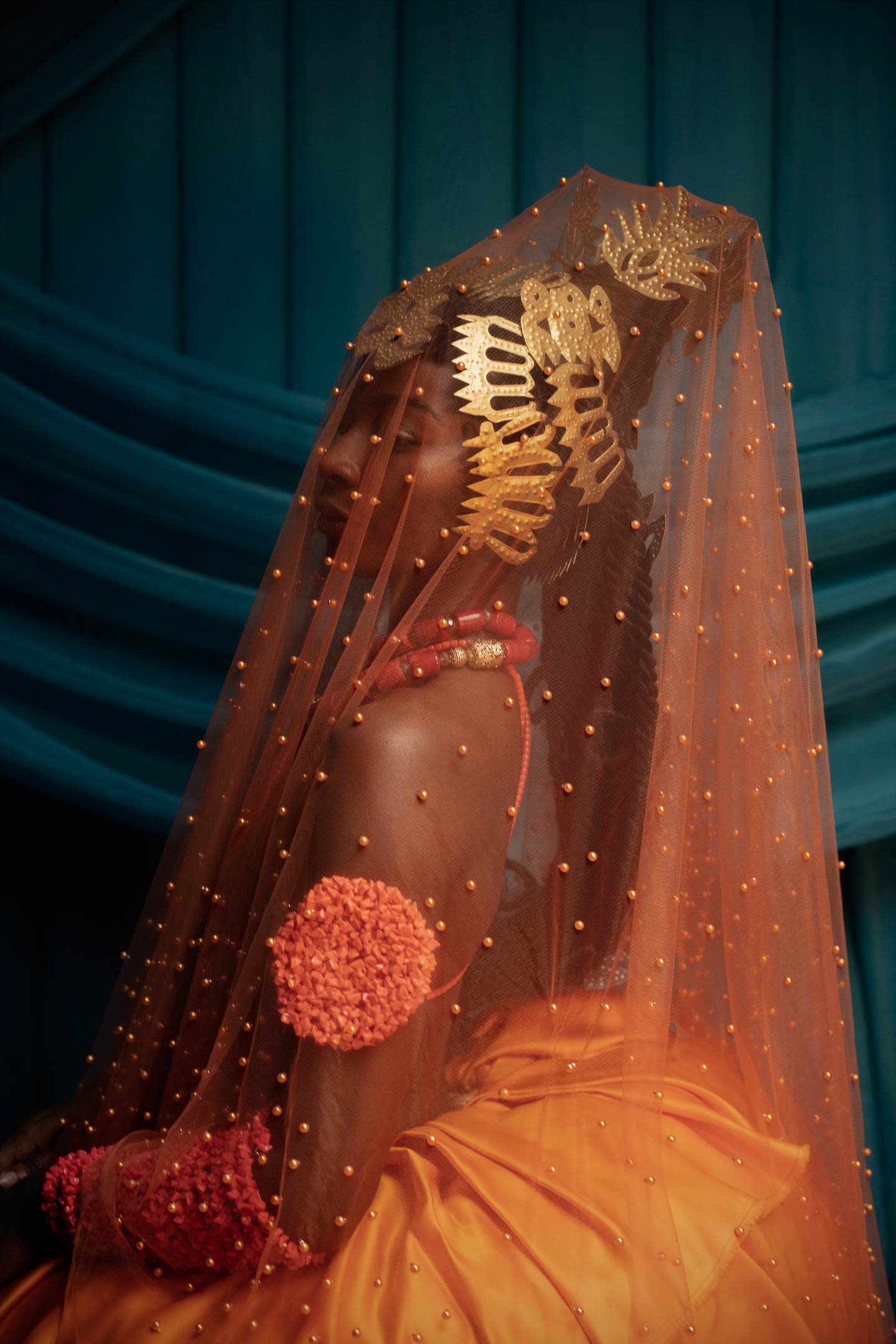 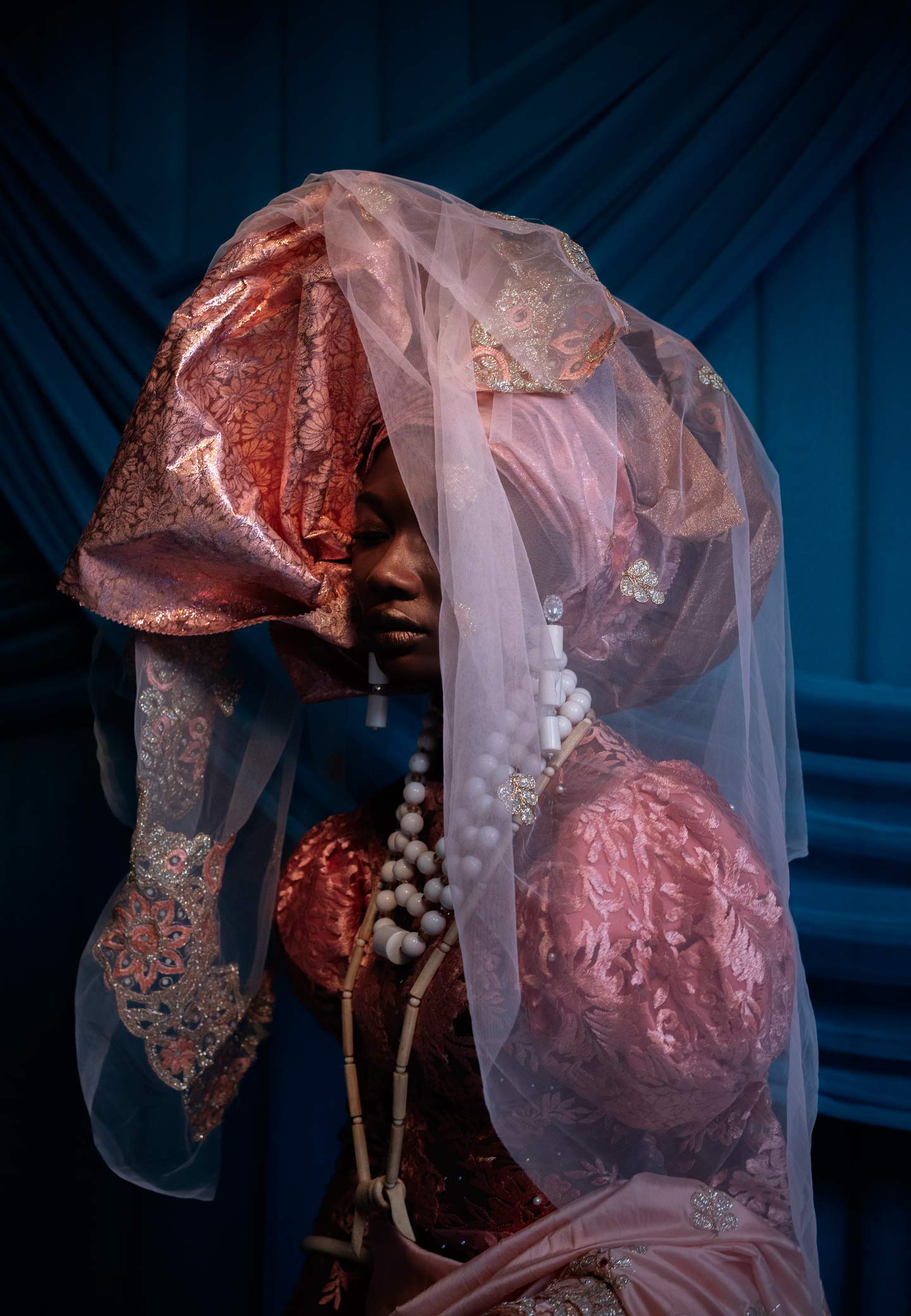 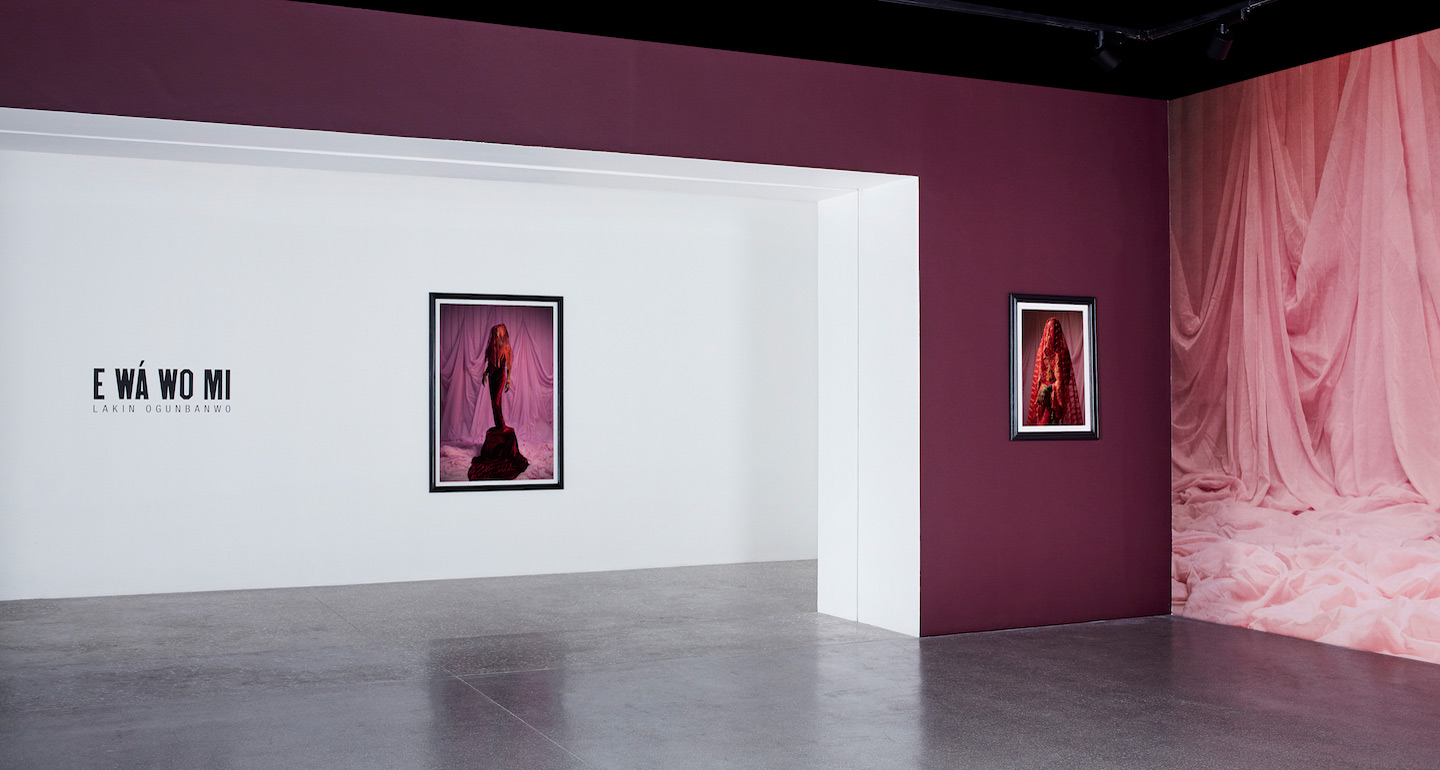 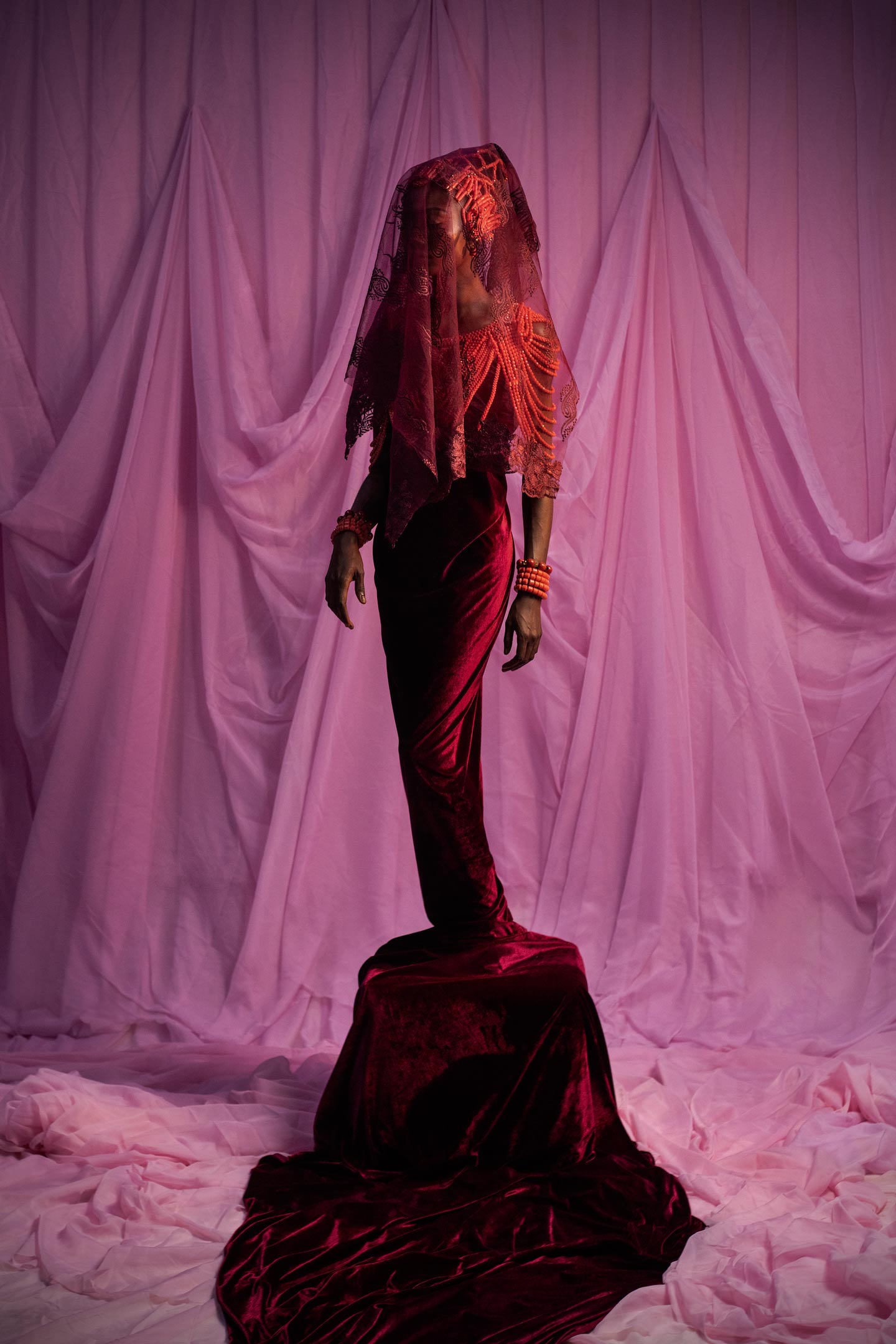 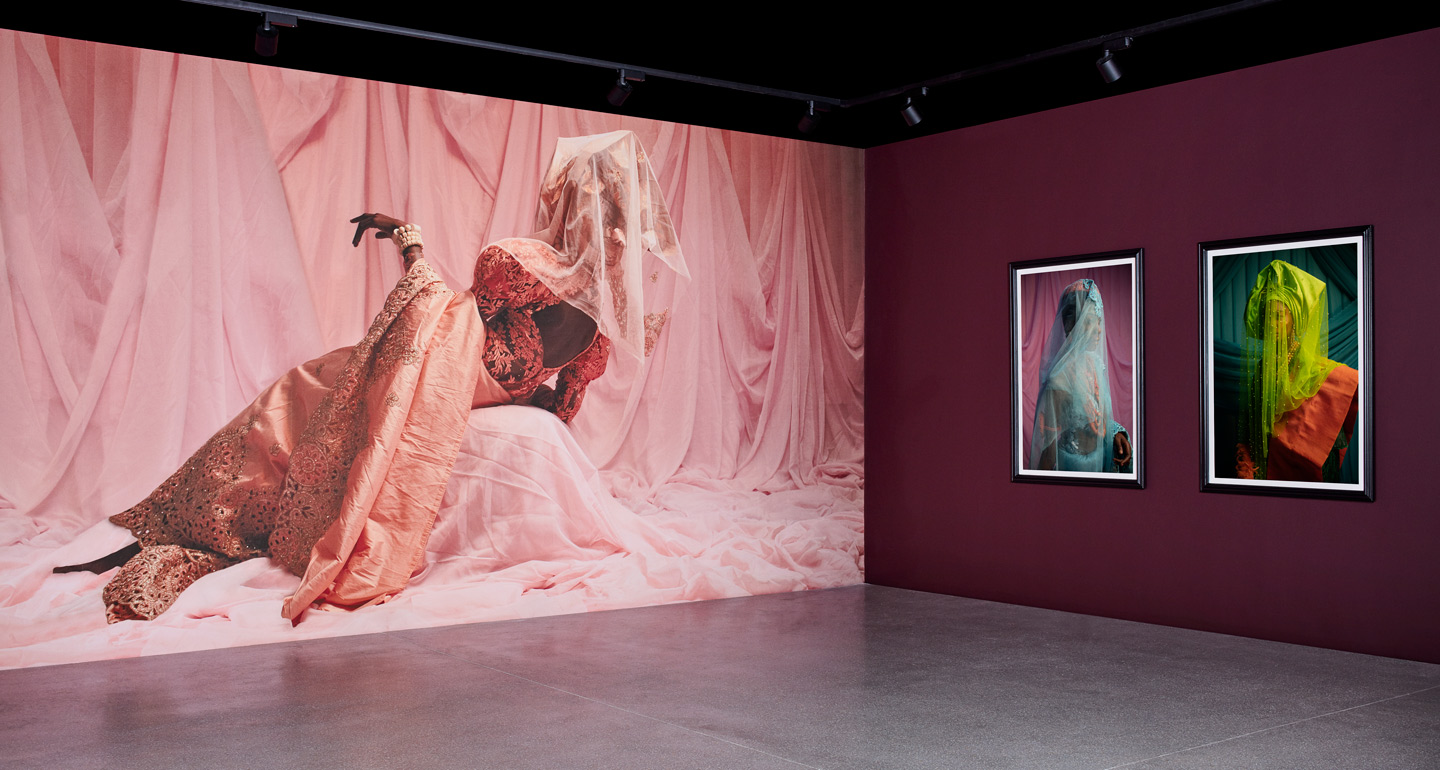 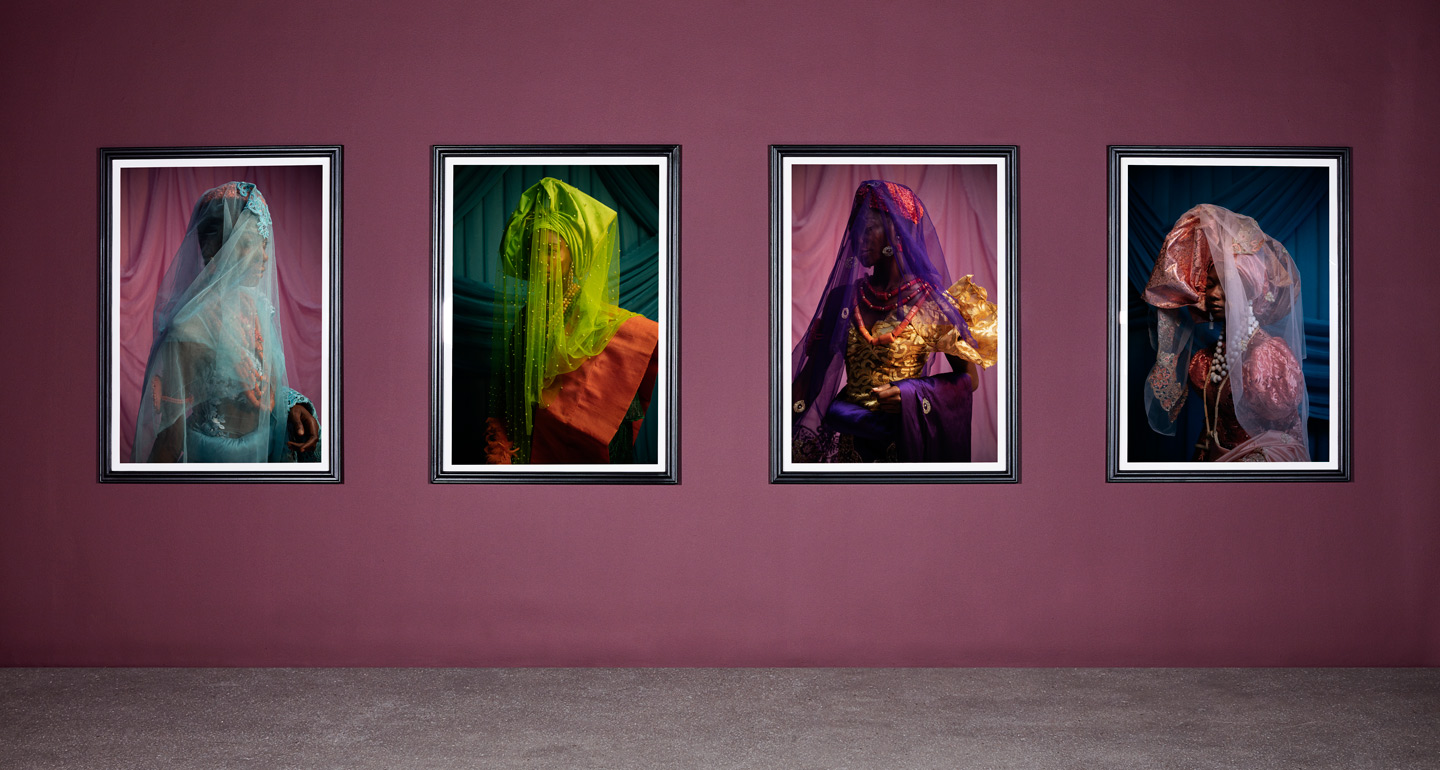 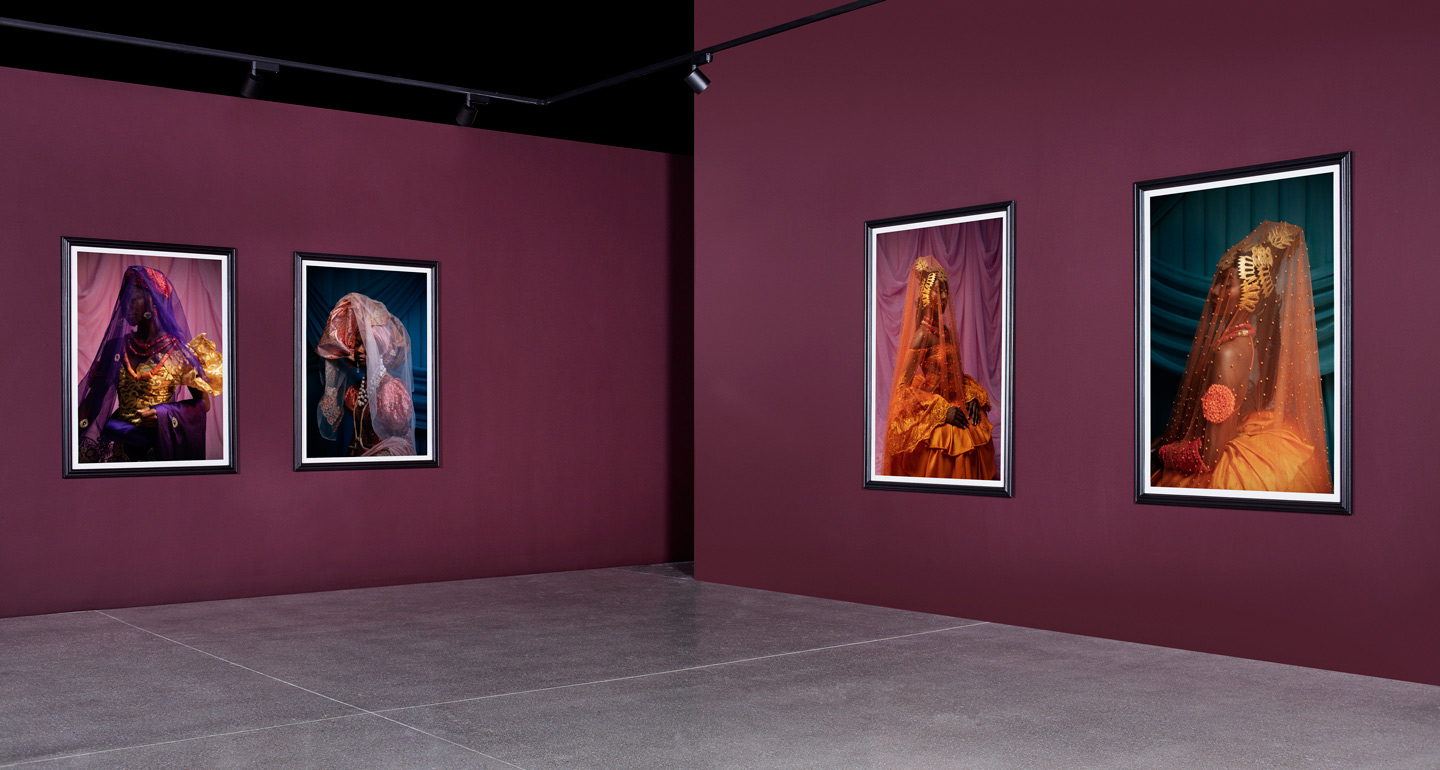 WHATIFTHEWORLD is pleased to present e wá wo mi (*come look at me) – a new photographic series by Nigerian artist Lakin Ogunbanwo. Central to Ogunbanwo’s latest exploration, is the culture surrounding Nigerian brides and marriage ceremonies. He uses veiled portraiture to document the complexity of his culture, and counteract the West’s monolithic narratives of Africa and women.

Ogunbanwo’s interest in expanding the contemporary African visual archive began in 2012 with his acclaimed ongoing project, Are We Good Enough. In this series, he documents hats worn as cultural signifiers by various ethnic groups in Nigeria. In e wá wo mi Ogunbanwo furthers this investigation by representing the traditional ceremonial wear of the Yoruba, Igbo and Hausa-Fulani tribes, amongst others. Rather than objectively archive these as past-traditions, however, he mimics the pageantry of weddings in present Nigeria. He creates elaborate sets of draped fabric as a backdrop for these brides to perform.

The performances these brides carry out are ones of love, familial and cultural pride, feminine strength, and a heterogenous African identity, but they are also the burdens of being wives, mothers and daughters-in-law. The expectation of femininity, and the role of women, are canonised on the wedding day. “From how she dresses, to how she carries herself, to what she is told. She will be fertile, she should be submissive and supportive: These are the things she hears on that day.” Ogunbanwo reflects, “I’ve found weddings to be very performative, and most of the performance generally rests on the bride.”  On this day, the bride is admired and observed for her proximity to a constructed womanhood: she is feminine, demure, grateful, emotional, and graceful. Ogunbanwo comments on this by obfuscating the individuality of these women, masking their faces with veils— a style signature to his photography.

The brides are captured in singular portraits, veiled and barricaded off from the fuss of weddings: planners, caterers, decor, family drama, photoshoots, hashtags and groupings of friends and families, identifiable by groups wearing the same fabrics or colours. The attention Ogunbanwo places on these brides, as symbolic individuals, gives these portraits a regality and grandeur. The brides are  styled similarly to the goddesses, queens and courtesans in renaissance paintings. They are celebrated women. Ogunbanwo uses the soft lighting and opulence of these scenes as an opportunity to comment on the absence of ‘blackness’ in these archives. He co-opts this visual language to re-imagine Western perceptions of beauty, and to frame these African women as confident, beautiful subjects. The brides are conscious of their role in being looked at, and perform accordingly.

Igbo brides pose with ivory bracelets or in an orange coral beaded cap and necklaces. A Yoruba bride parades in an intricately crafted gele (a pleated, stiff headscarf); a sign of her social status and cultural pride, while holding a feather hand-fan seemingly as a prop to accompany her dancing. The henna-stained hands of a Hausa-Fulani bride fall over a theatrical red lace dress.  The brides which fashion his photographs are picturesque motifs of the conflation between tradition and contemporary fashion; global trends and local culture; historical oppression, and present legacy and empowerment. Nigerian fabrics such as Aso-Oke  (“prestige cloth”) — culturally specific to the Yoruba tribe — exist alongside lace, damask, silk, velvet, taffeta, adire or guinea.

Ogunbanwo expands beyond the “white wedding” by documenting a Nigerian alternative, and in doing so, believes that there is more than one way to be married, be a woman, and be African.

Click here to read an article about the exhibition on Bubblegumclub.

Born in Lagos, Nigeria in 1987 Lakin Ogunbanwo studied Law at Babcock University, Nigeria and Buckingham University, England before beginning work as a fashion photographer in 2012. His work has been featured in the Times New York, ID online, British GQ and Riposte Magazine. Solo exhibitions include We Must Not Be Looking (2017) and Are We Good Enough (2015) at WHATIFTHEWORLD, and Portraits by Lakin Ogunbanwo (2013) at Rooke & van Wyk Gallery in Johannesburg. Group exhibitions include Dey Your Lane! at BOZAAR; Lagos Photo Festival (2016) and Art x Lagos in Nigeria (2016).