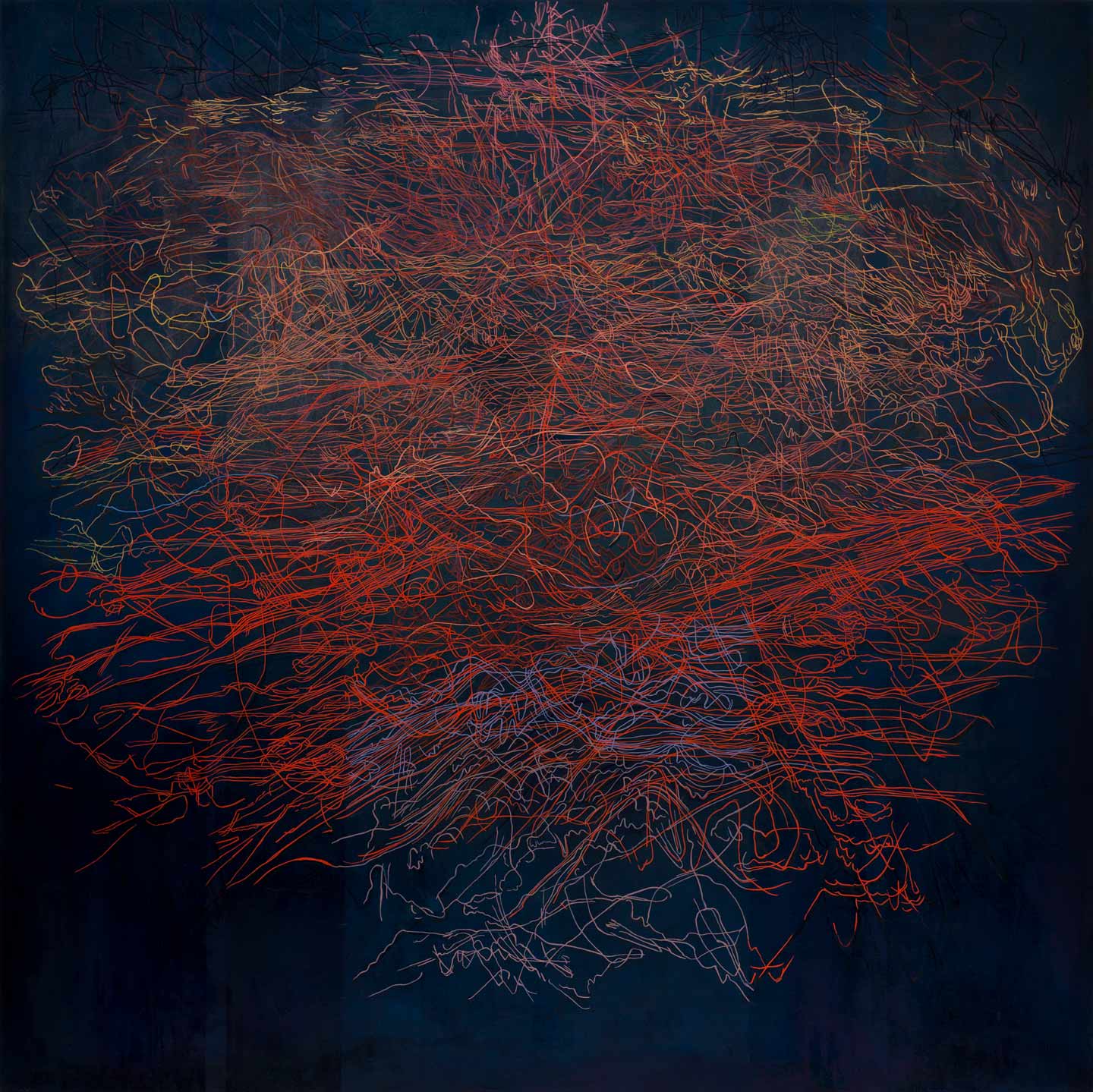 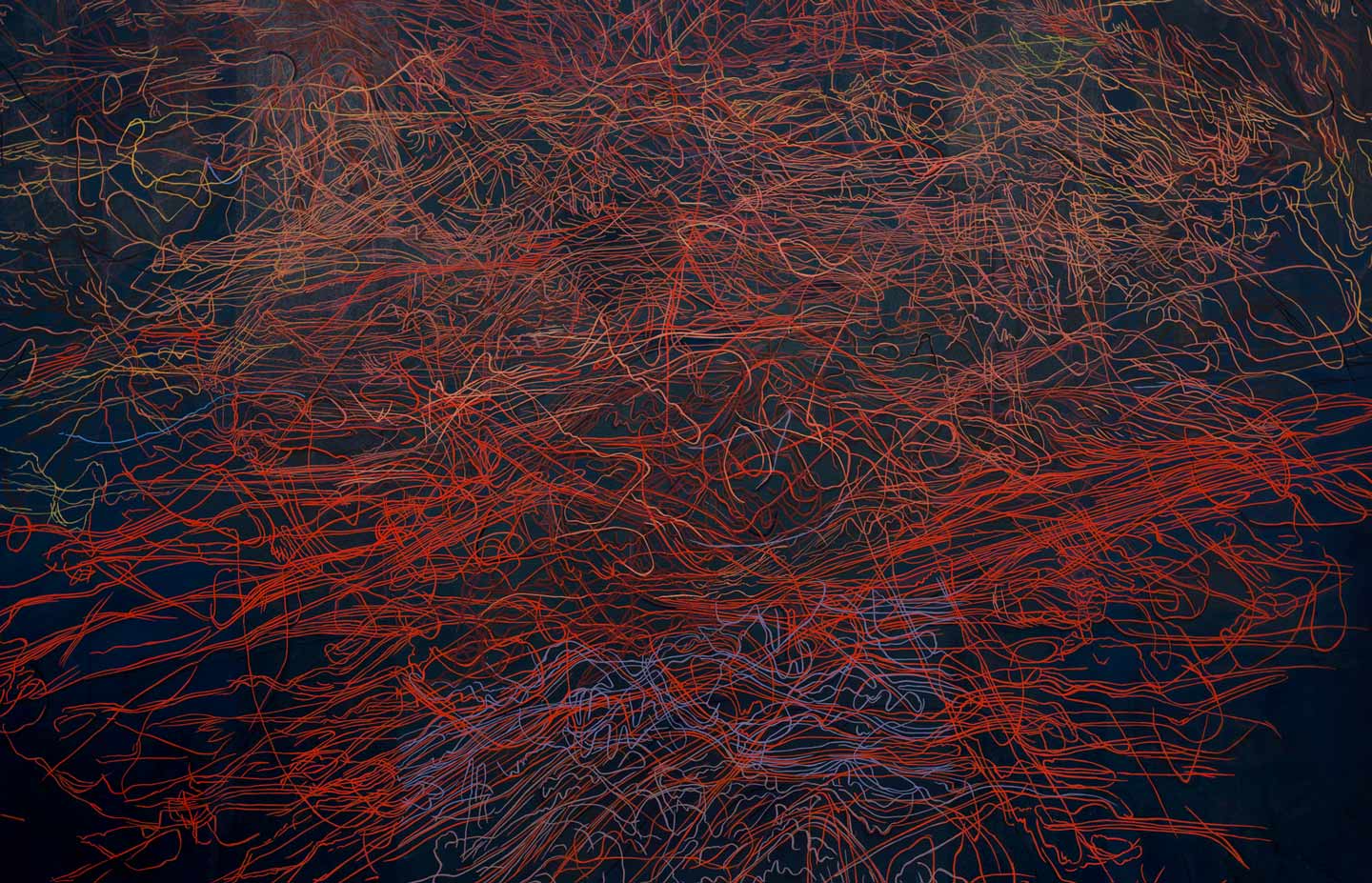 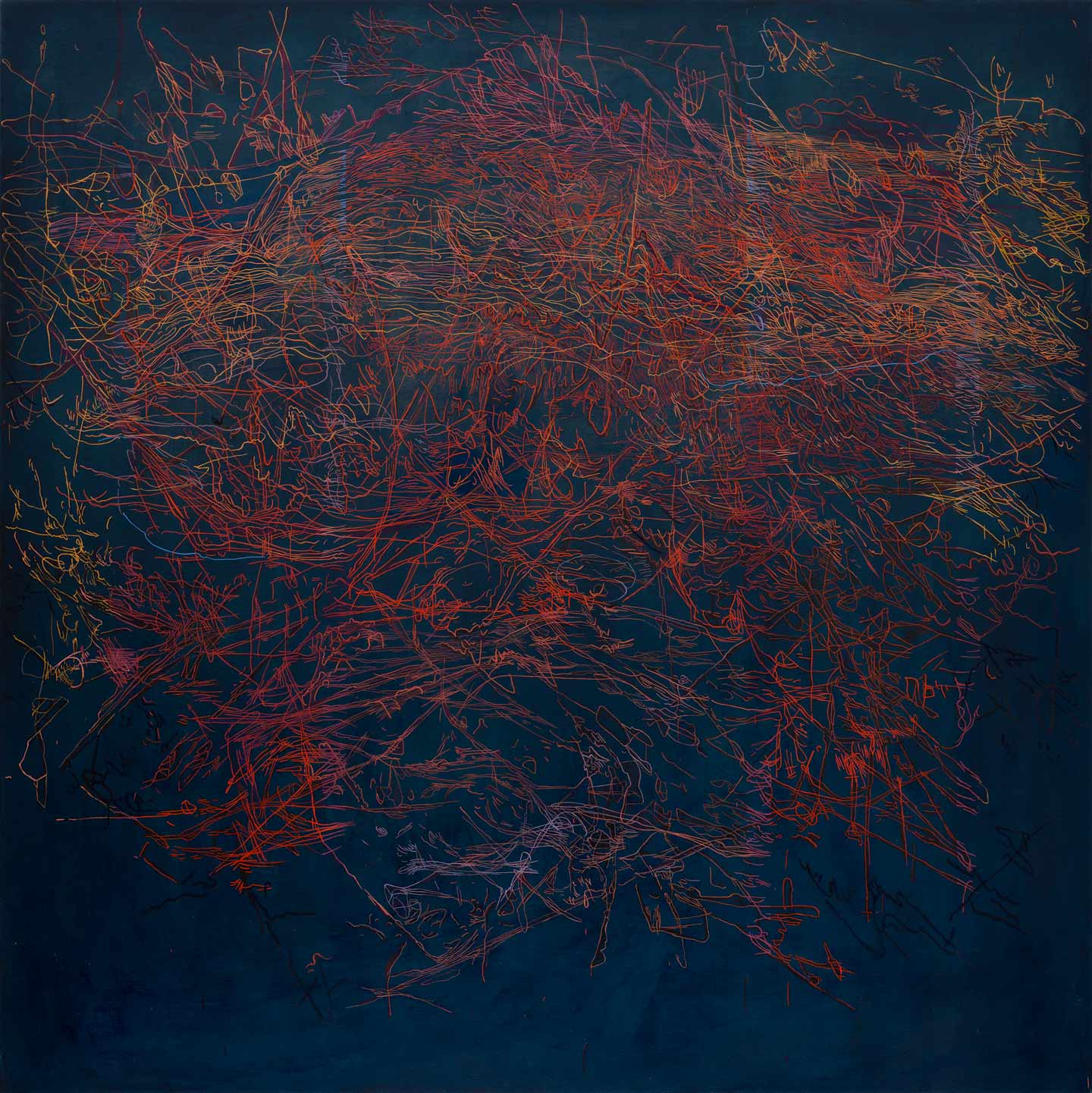 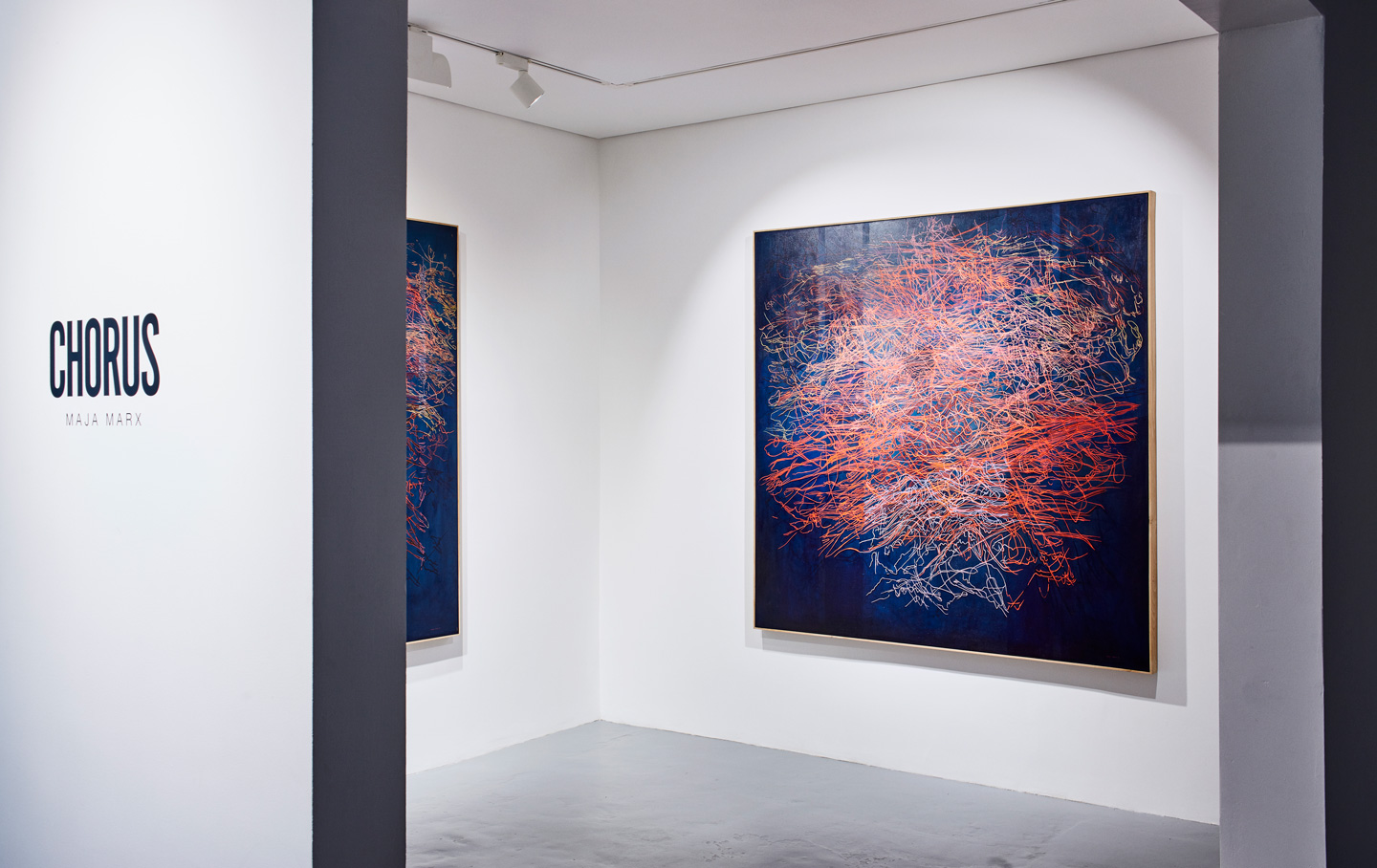 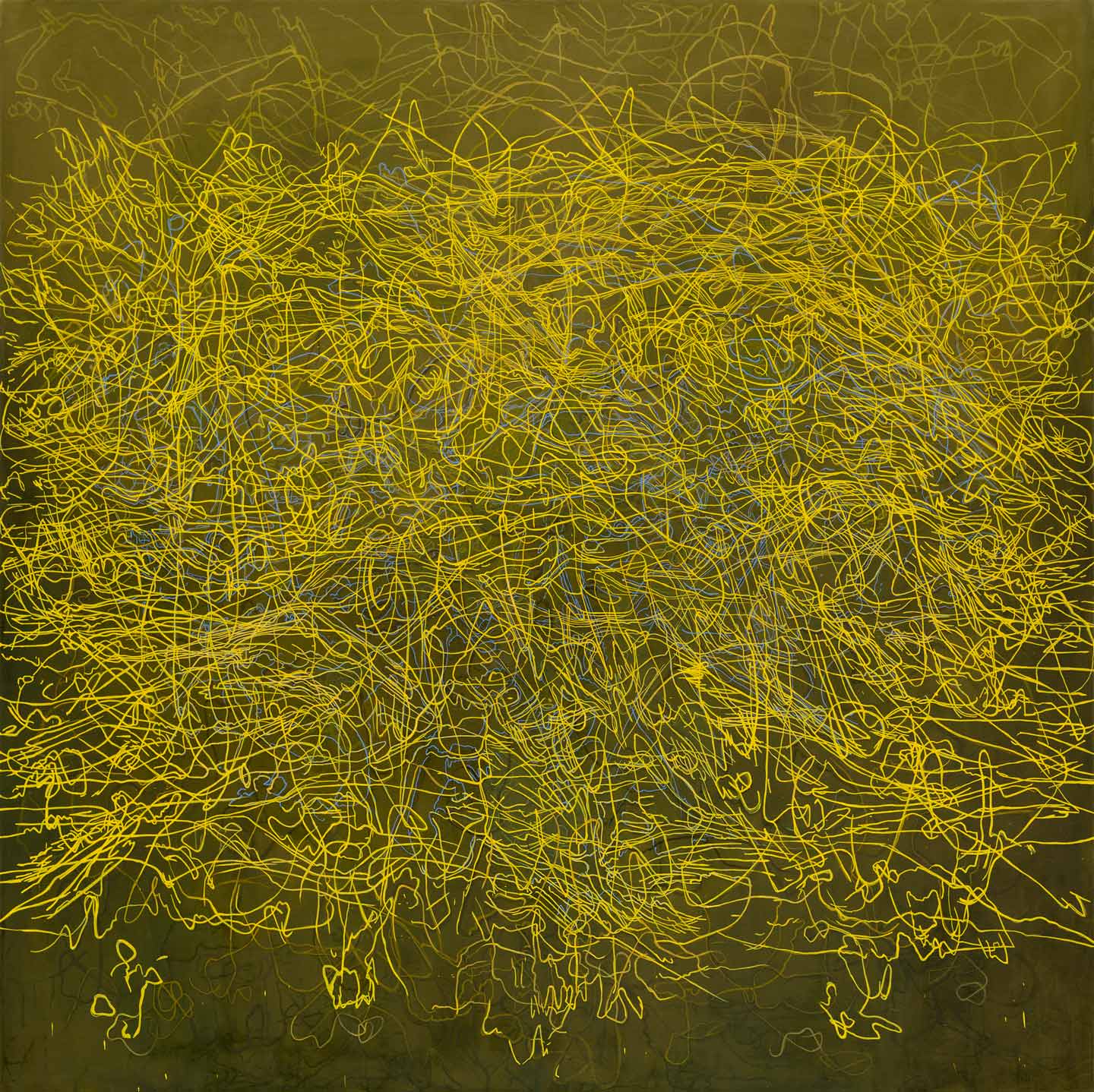 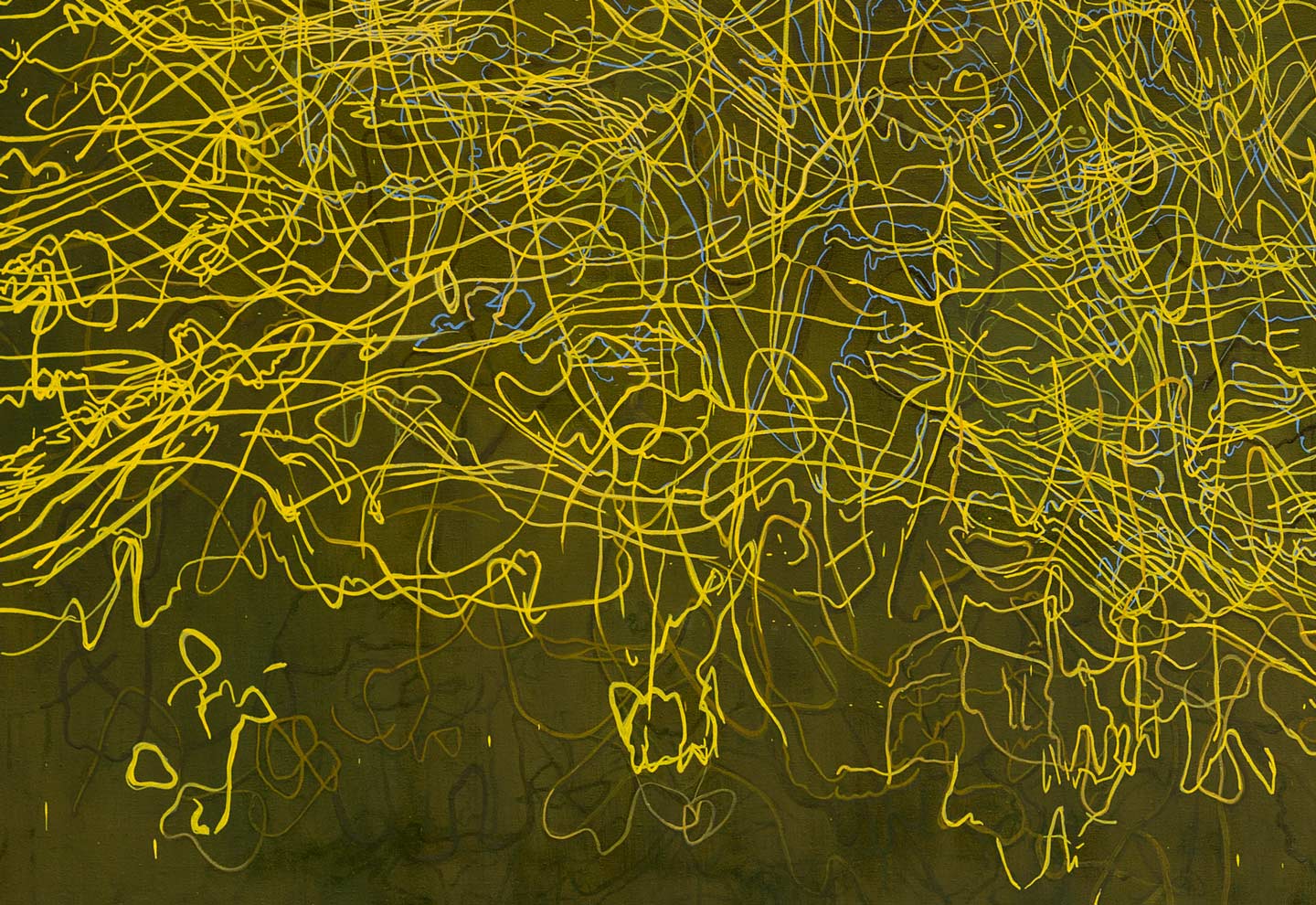 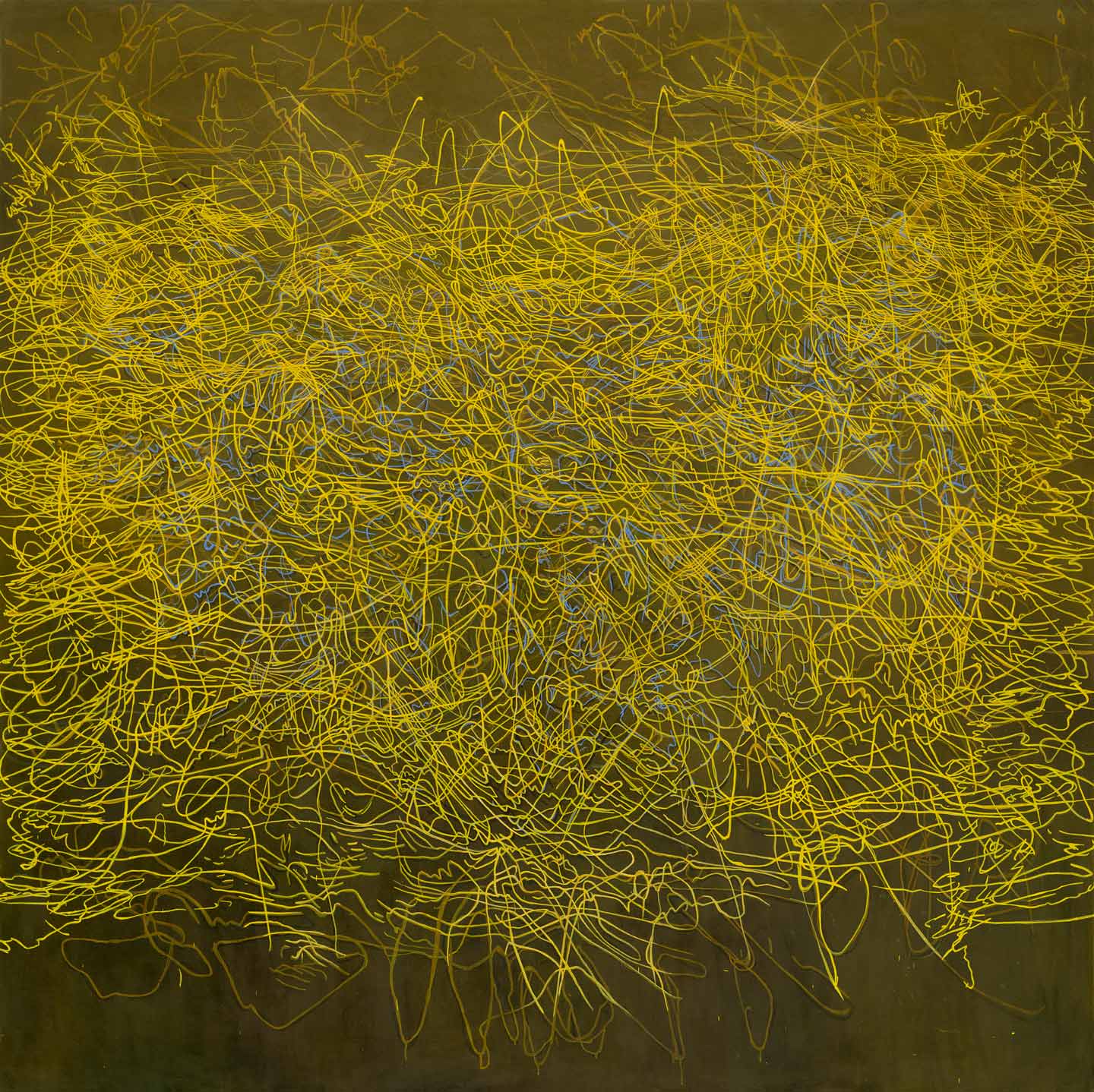 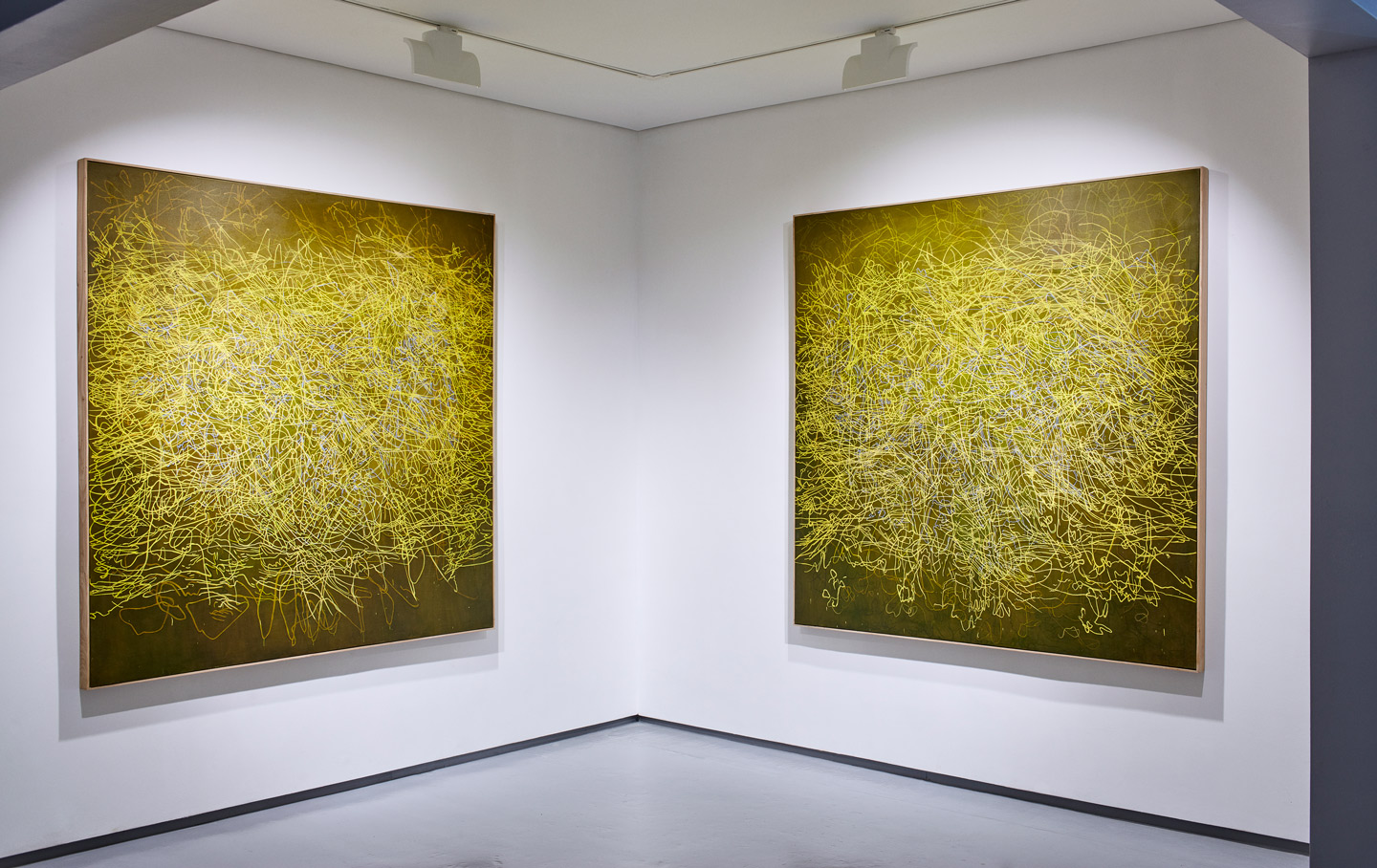 WHATIFTHEWORLD is pleased to present Chorus  a new exhibition by Maja Marx.

Maja Marx’s abstractions start with reference to the real. It is important to her that she literally ‘finds’ the lines and compositions from which her paintings originate as she moves around in her world. The scattering of planes within the flattened form of a trampled object, a cluster of lines in the undergrowth, a composition in the dust under foot; fleeting moments and discarded objects provide her with ‘found’ lines and ‘found’ compositions. These are documented and mapped onto her canvasses with exactitude and care. This is a translation from the referential into the formalist that delivers onto her canvas a scaffolding of curious lines that sit on its surface as found objects. It is a scavenging act aimed at freeing the painter from the automatic marks and intuitive strategies of her own hand and the mimetic mark-making of the painterly tradition. It is an act of gathering that serves to bring a language of suggestive line to her canvasses that is ‘taken’ from the visual, lines that were brought to the canvass like bundled branches, like gathered wood.

This original mapping will be the anchor to many subsequent translations. From this point Marx loosens the relation to the original image. As if the act of translation self-propels, Marx continues to add layer after layer of linework to the image. She paints as if she is uncovering through layering, her brush performing like the brush of an archaeologist.  The ‘found lines’ provide her with a line-typology that thrusts itself forward like a new language and a flood of words.

The referent now shifts to become the developing field of lines itself. With each additional layer, she responds to what she sees in front of her; the layers from before. Whereas the painter’s gaze would traditionally shift between referent and painting, the model and the canvas, Marx’s gaze locks onto the painting and she paints into the optical field that she is at once observing and altering. These paintings are visual feedback loops in which she paints her ‘stare’ onto itself, the painting becomes the interweaving between the constantly shifting referent and the act of looking, a continual re-making of itself. One might describe Marx as ‘staring herself out’ – at and onto, her canvasses. Each return to the canvas weaves another layer of looking onto the layers underneath. Referentiality shifts to a field of densely layered interpretation.

Marx’s interest is in the different modalities of how line itself functions within the painting. When one looks ‘at’ a line, one’s eye is led by a trail that has been left by the movement of the arm, the evocative remnant of an action, the trembling line of the seismograph and cardiograph. But a line can also be looked ‘with’ – this is the ‘drawn line’, a line that functions to suggest something that takes shape  ‘between the lines’; it is a the line that serves to describe and refer. One can look ‘at’ and ‘with” lines, but one can also ‘read’ the lines themselves as one would read text.

When faced by Marx’s arachnean nesting of linework, one’s eyes fluctuate between these modalities of looking at, looking with, and reading. One might be taking joy in the gestural quality of a line when suddenly the line seems to suggest a shape. Something promises to emerge from chaos. As the eye tries to read a shape, another suggestion will interrupt, only to become distracted by the flirtatious urgency of a neighbouring colour that steals the eye. Each stroke is remarkable, each has a specificity and intensity that promises representation, but withholds it at the same time.  A loud and incessant hum, a tonal field woven from promised and withheld representation. An activity of looking that leaves one more aware of the act of looking than of what is being looked at. Staring into these works is like surveying a vast field of activity, thronging crowds, rushing streams, the cumulus of bodies in a Rubens, the vast simultaneity of Bosch’s landscapes of activity. But also not, as each promised ‘figure’ melts into ground, every promise of representation bleeds into the larger tonal field of loud colour. The experience is choral; all of the lines sing, and all of them does so at once.

Artist Biography
Born in 1977, Maja Marx is currently living and working in Cape Town. Marx is a South African contemporary proponent of abstract art; approaching painting as an optical activation of surface. She has featured in both South African and international exhibitions, with her most recent solo exhibition, Glare (2016), being her third to be hosted with WHATIFTHEWORLD; succeeding Block (2013) and Fold (2011).