Inevitable Journey to Mars I 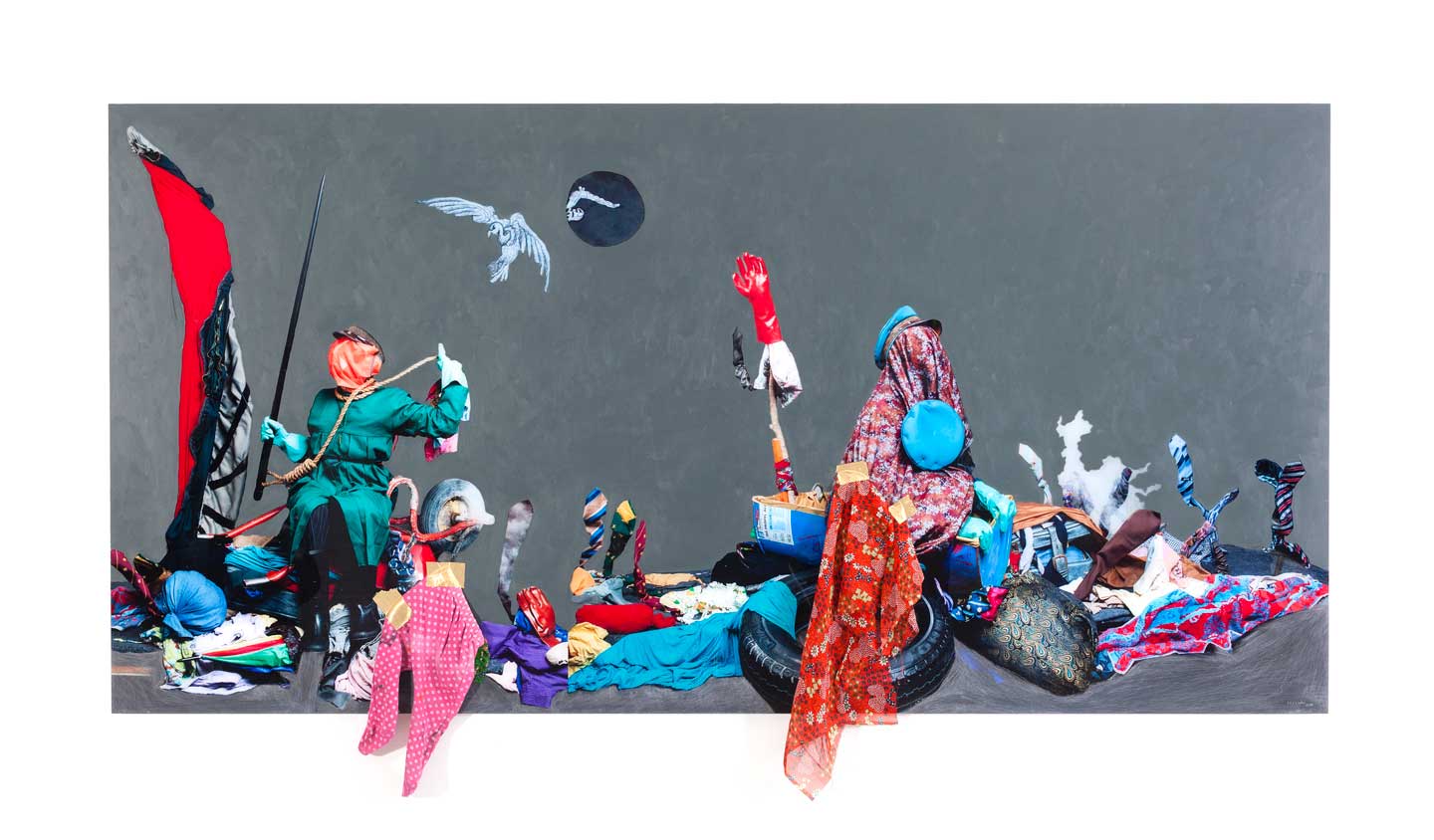 They Have No God But Money 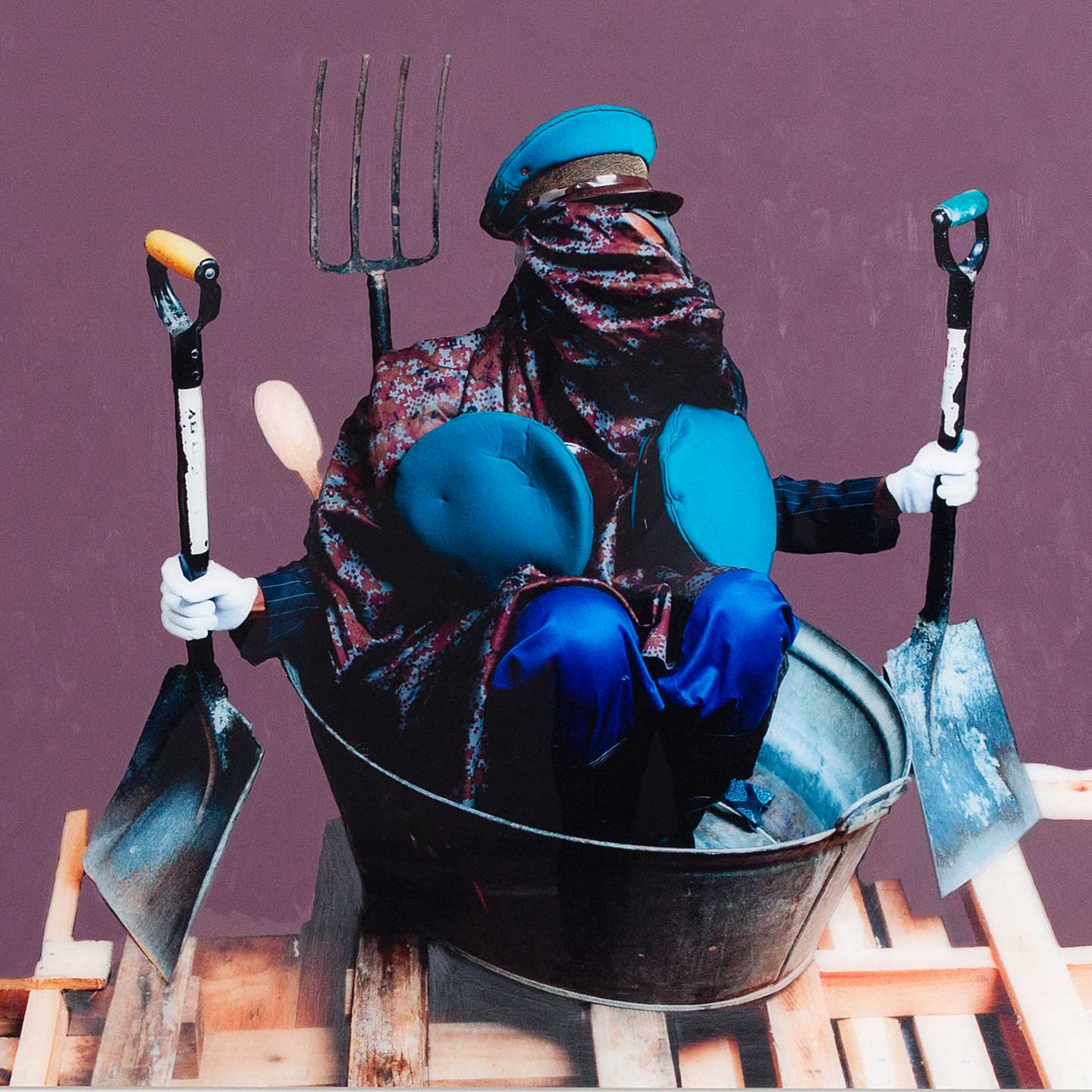 Man with a Spoon 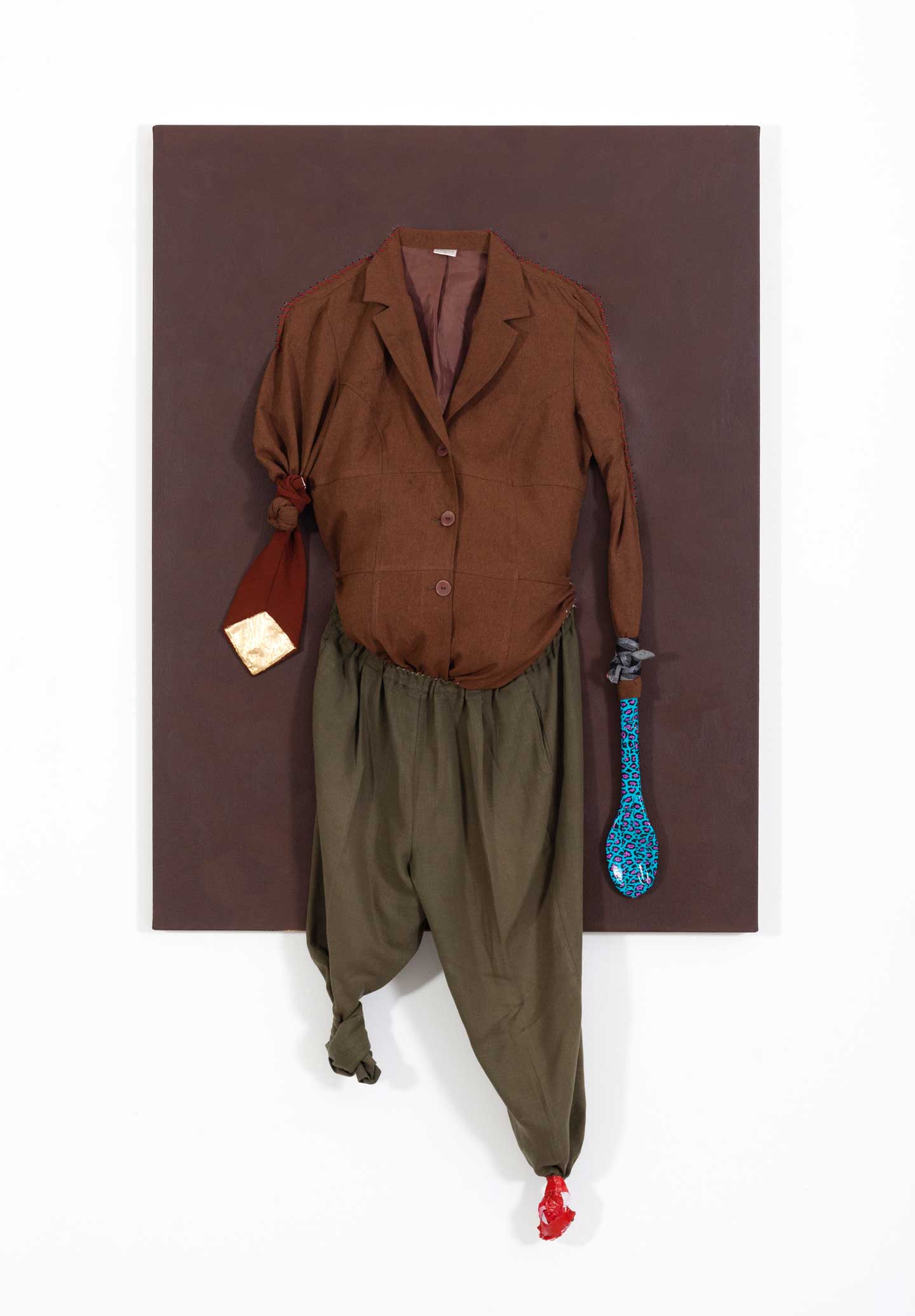 Man with a Spoon (Detail) 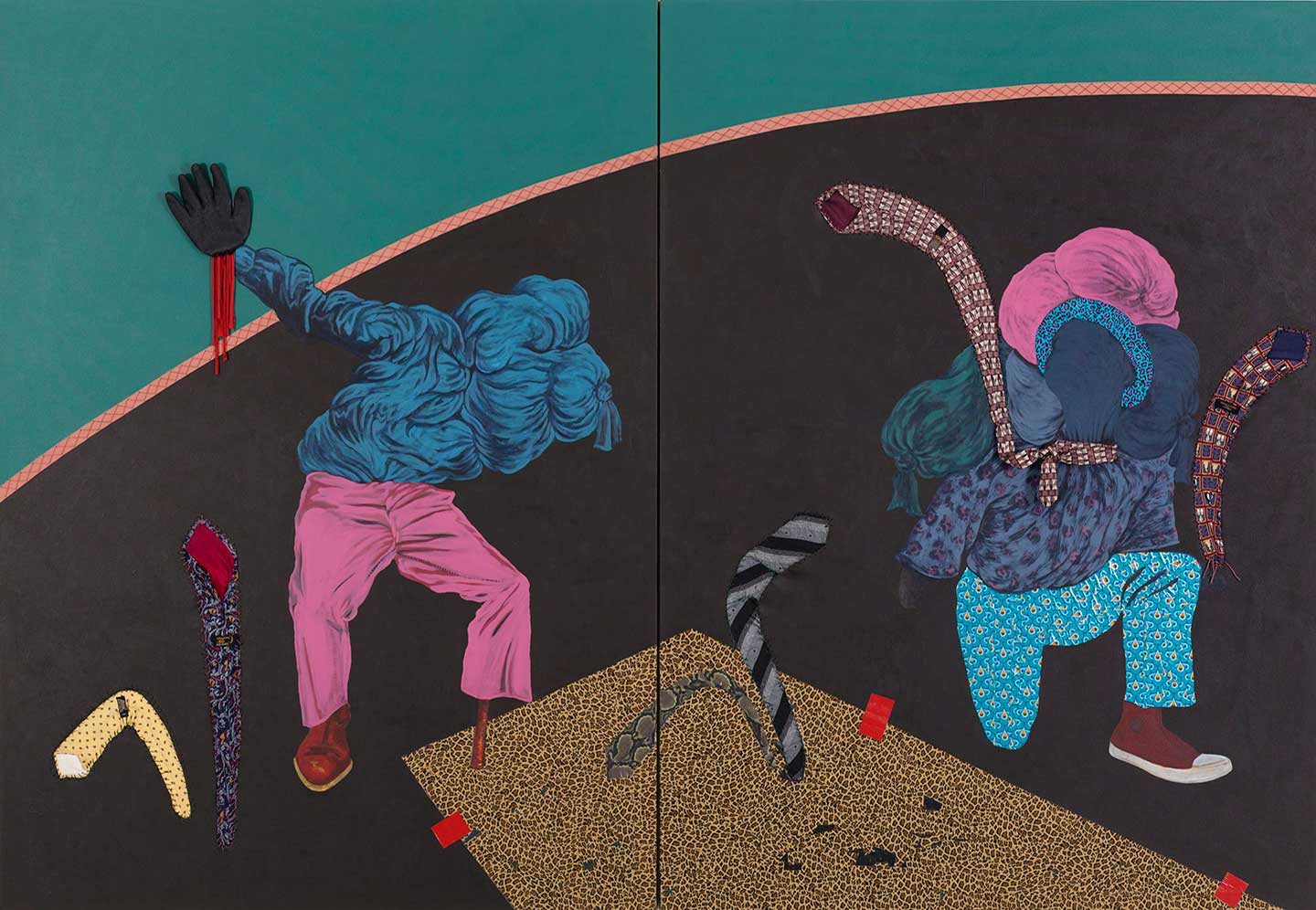 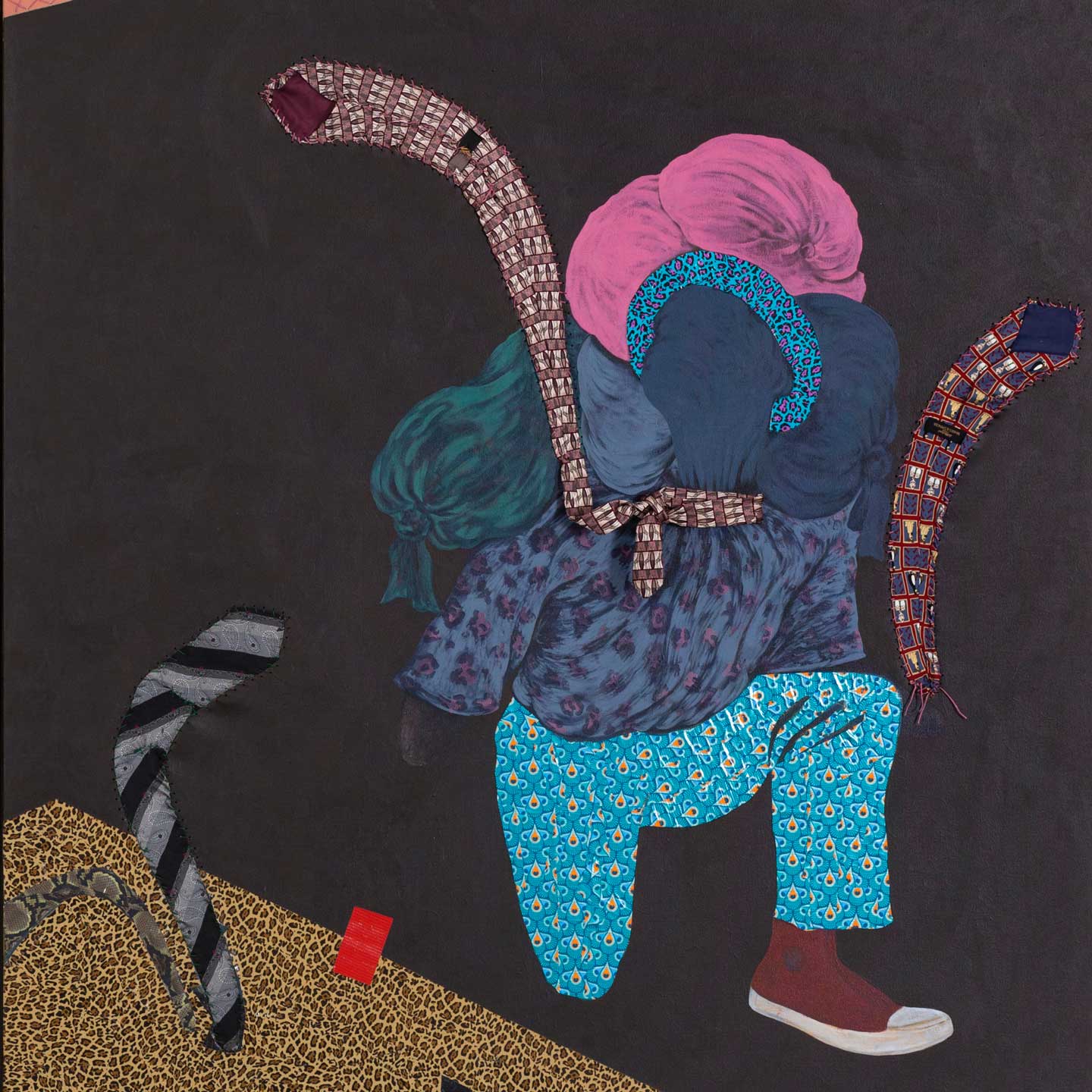 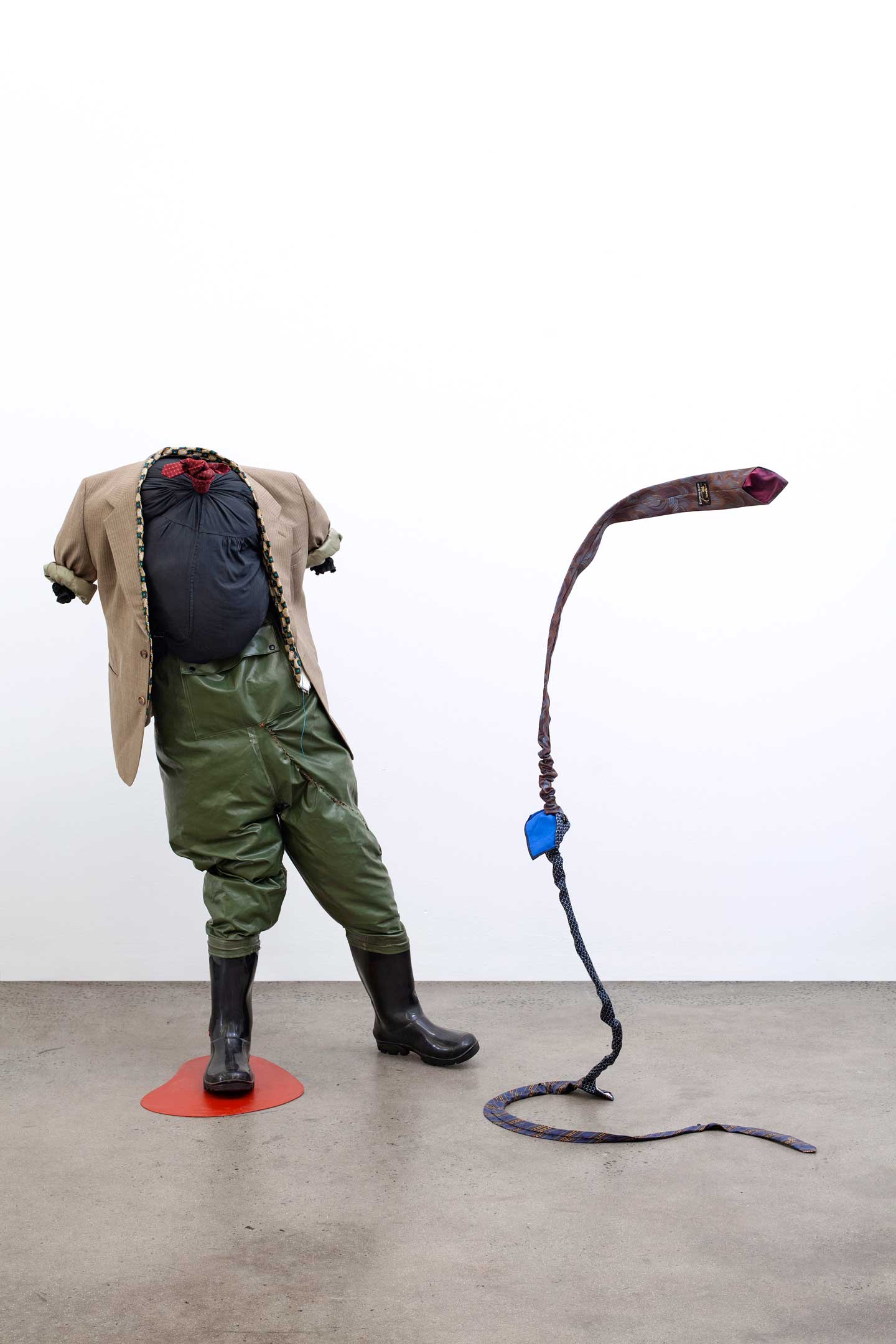 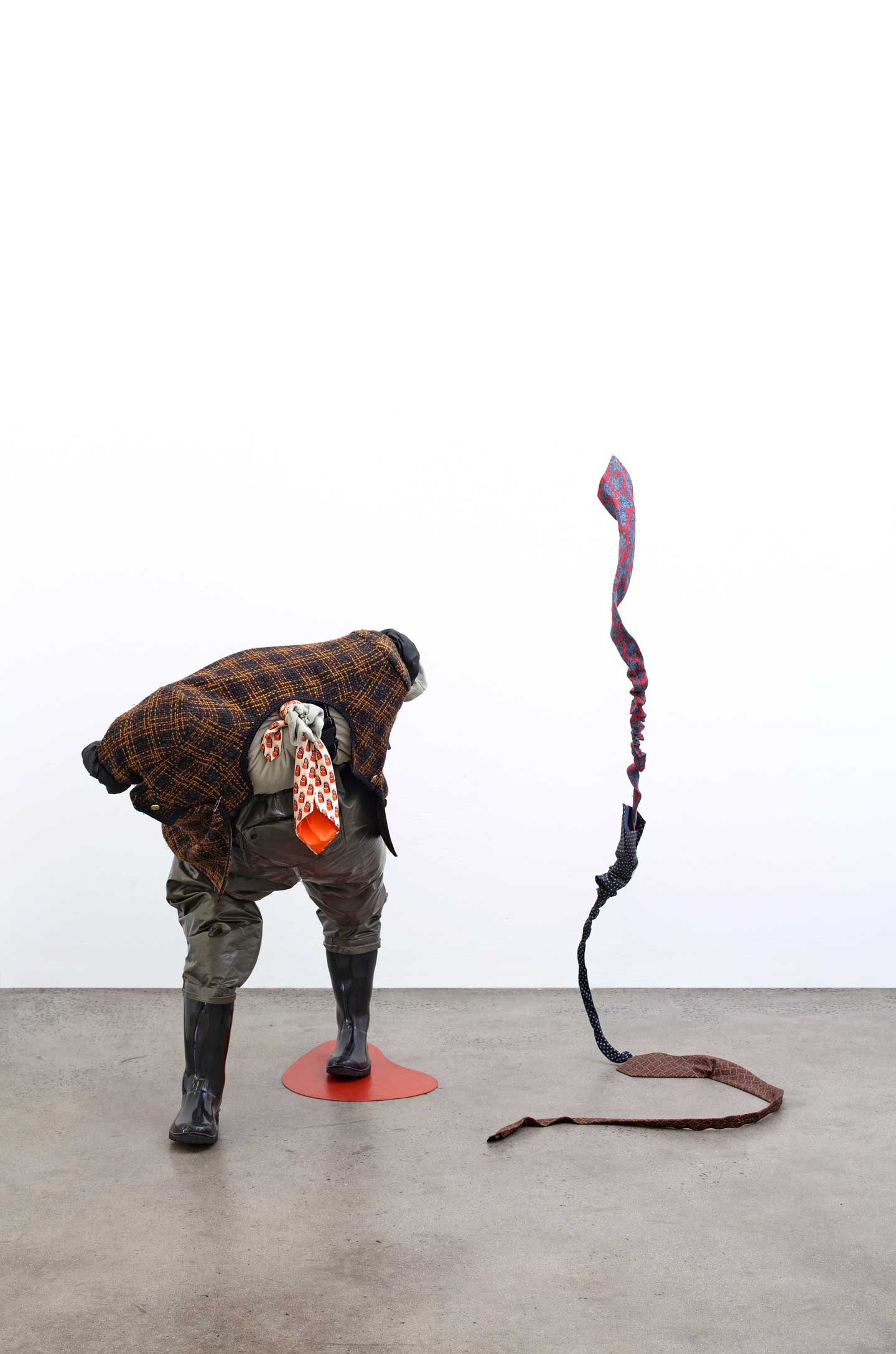 To Dream Without Land to Plough 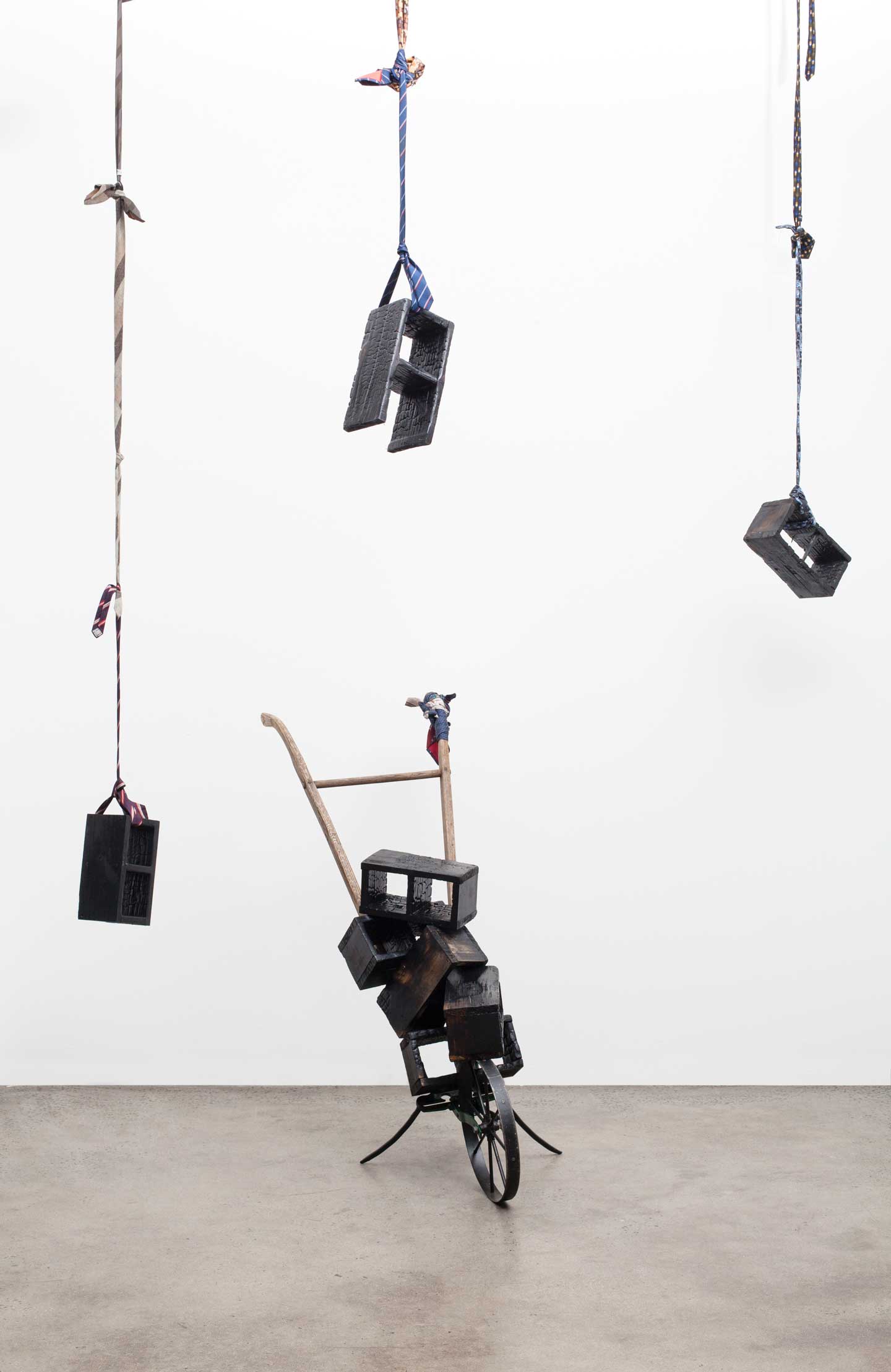 Your Island Will One Day Sink 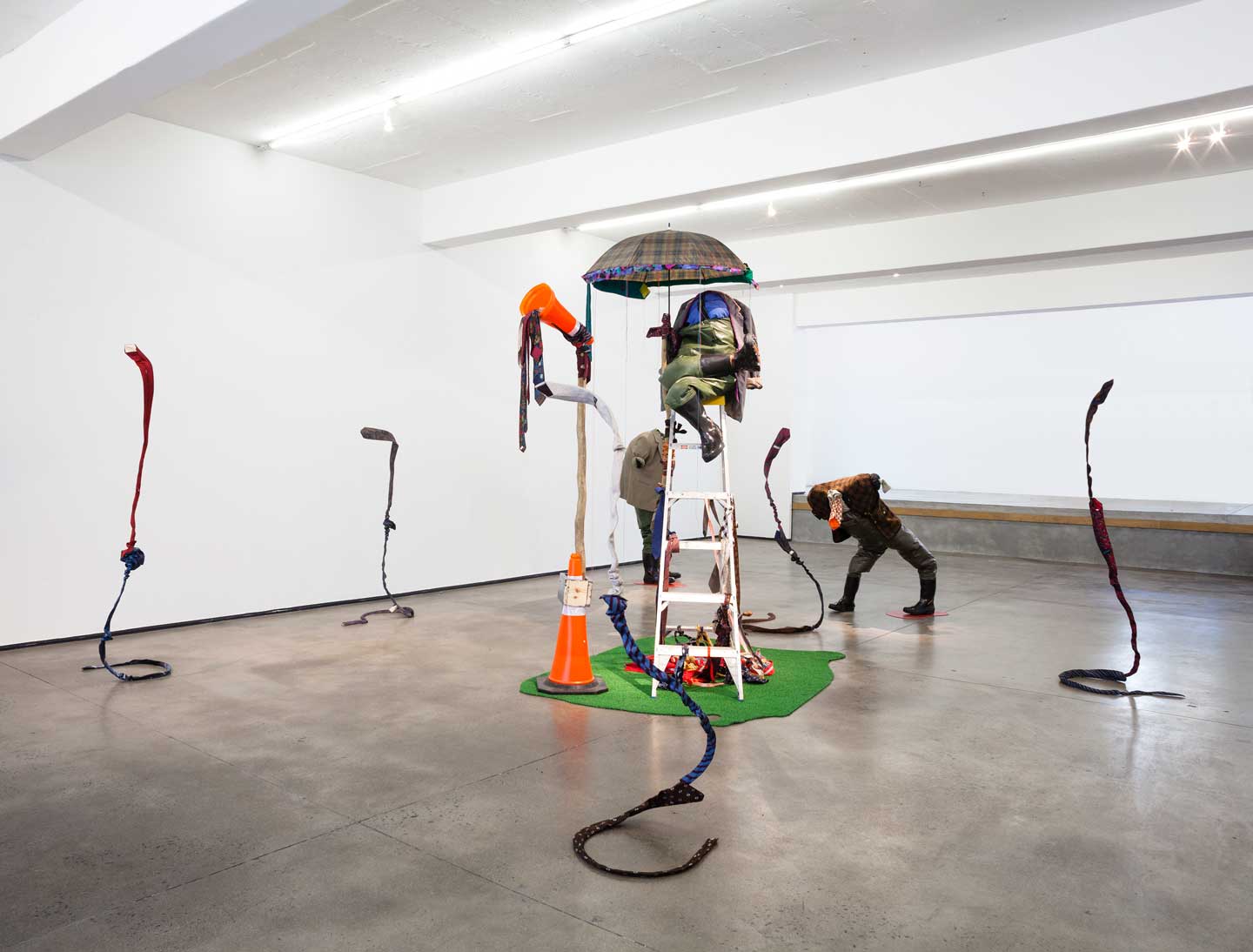 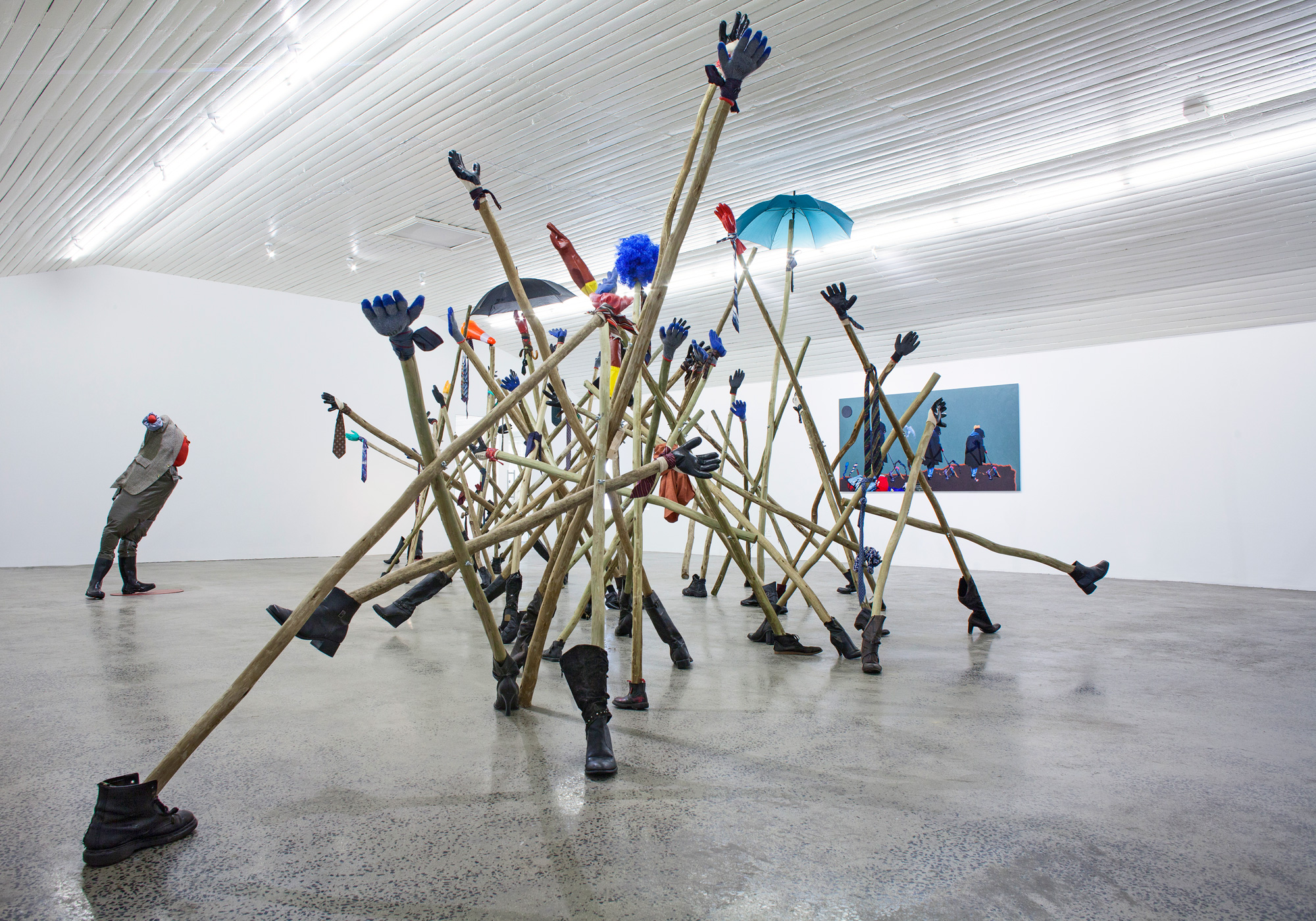 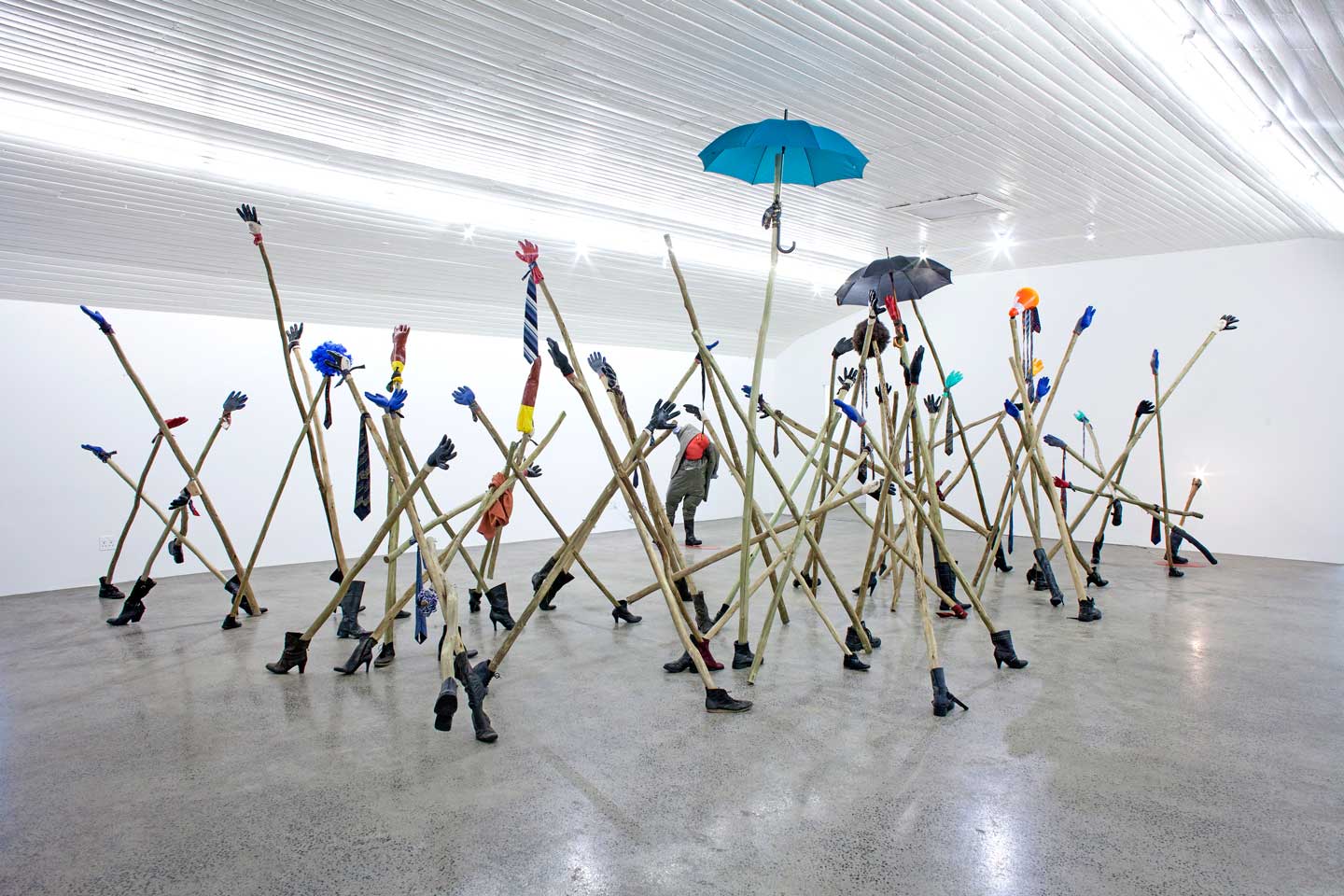 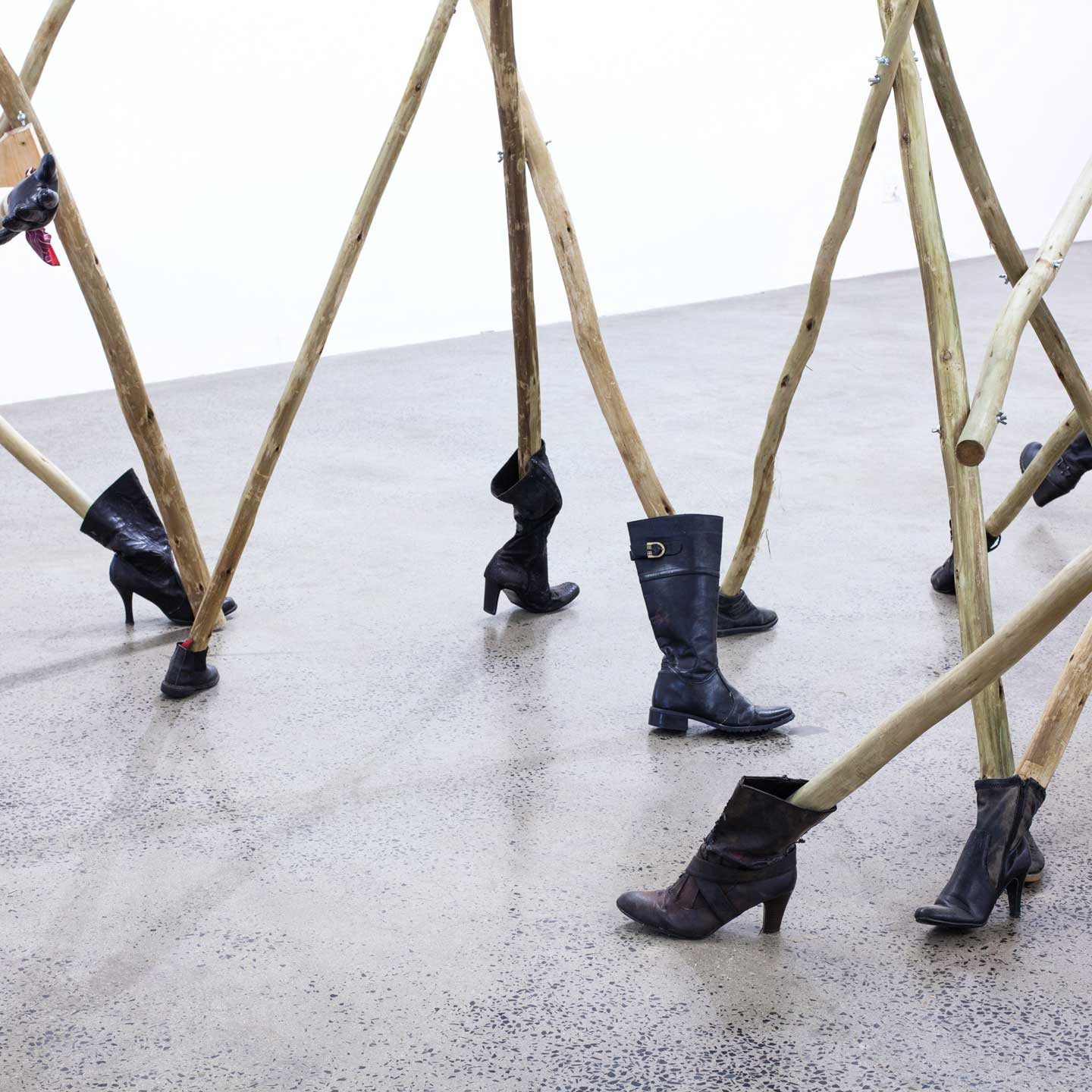 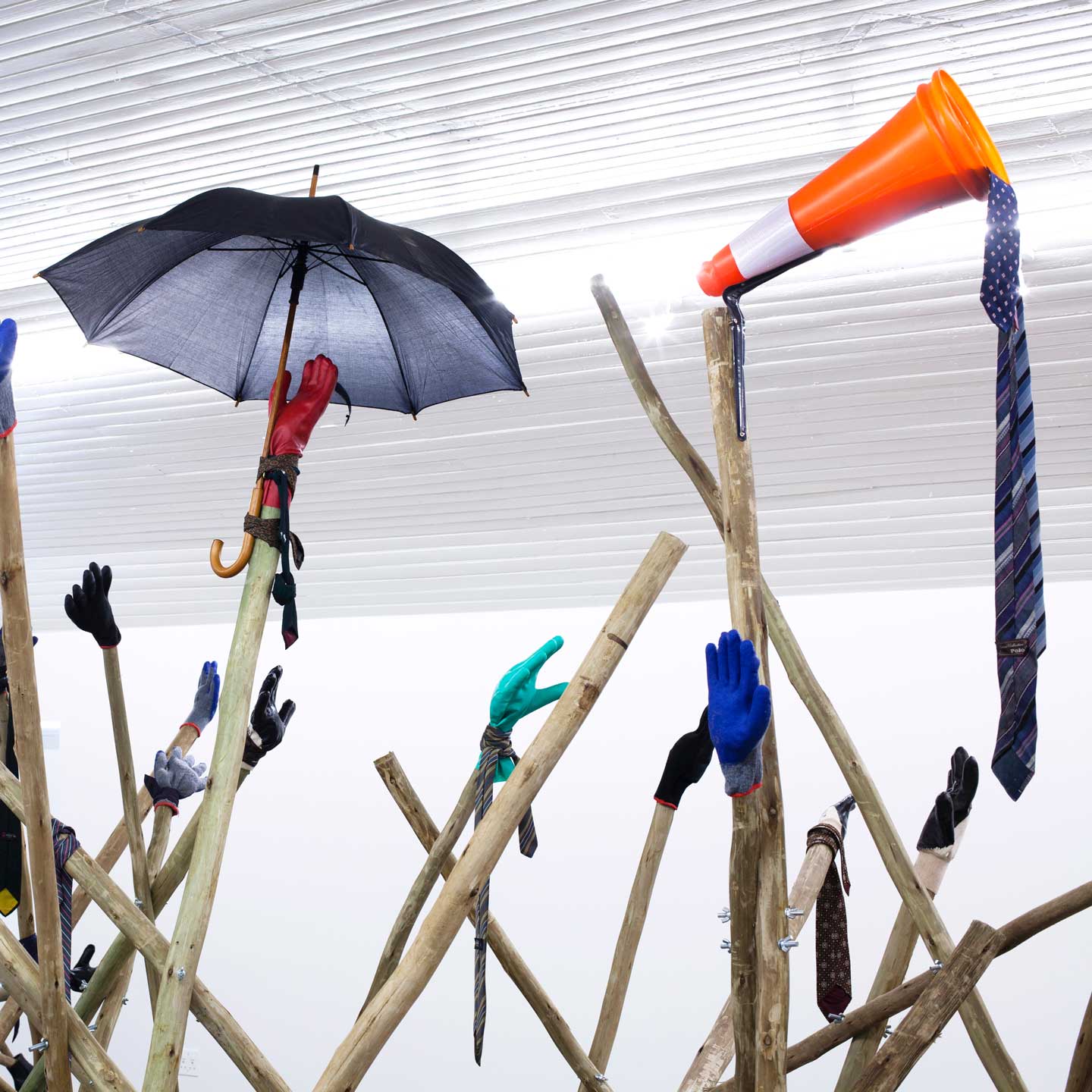 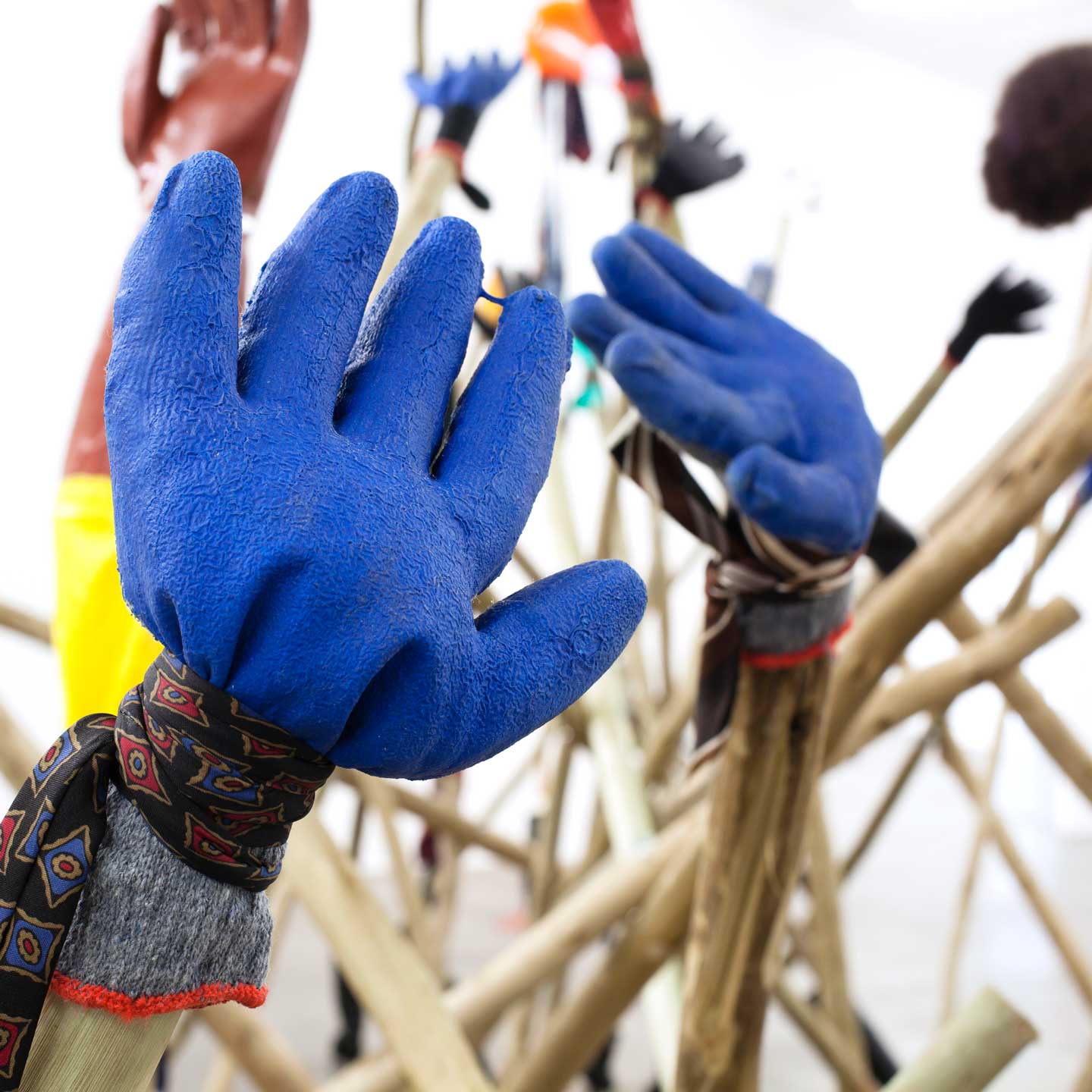 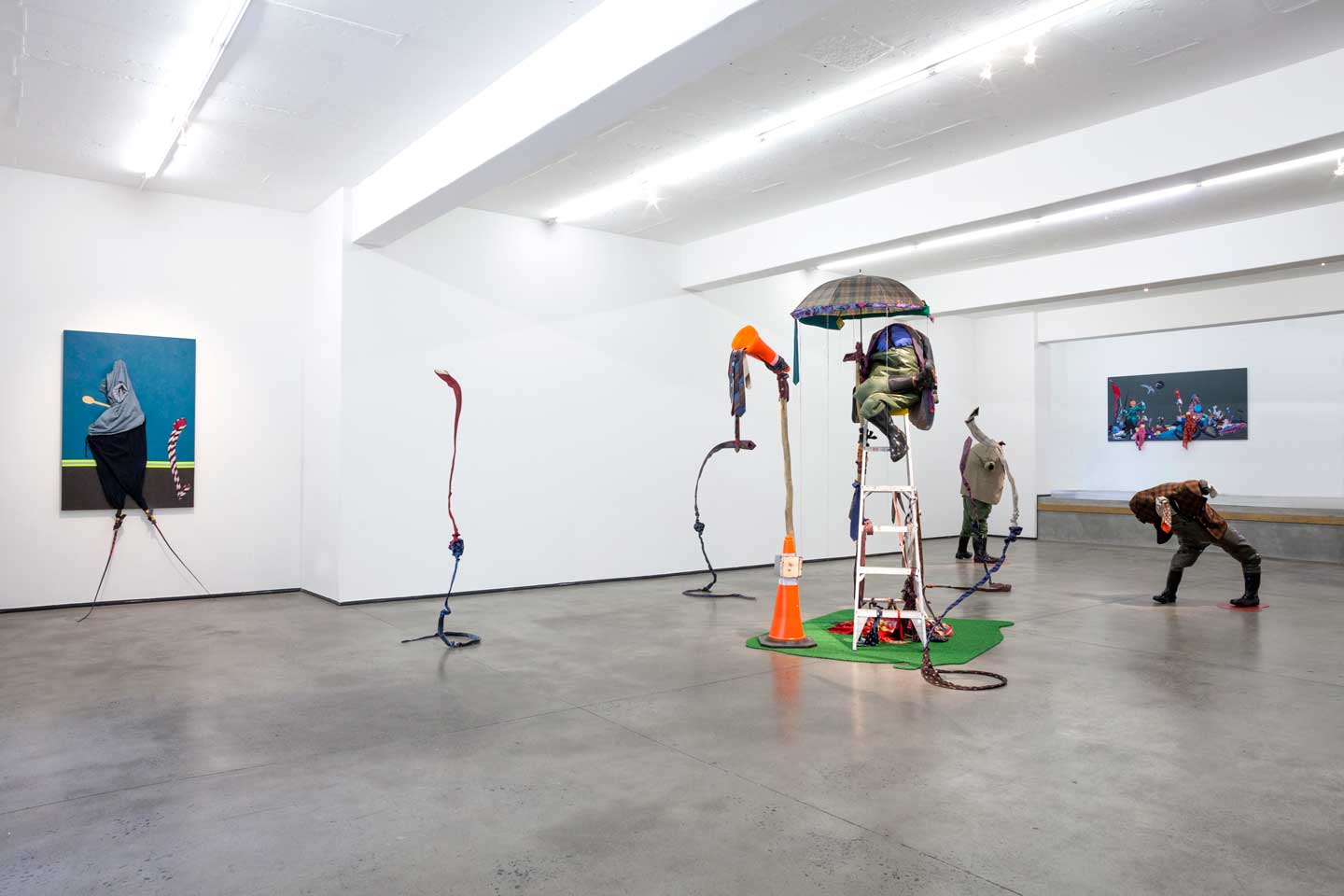 South African artist Simphiwe Ndzube’s carnivalesque portraits catch figures in the midst of movement, in the process of becoming. His theatrical landscapes are peopled by characters who are learning how to be subjects of their own making. They observe others and analyse situations, emulating, educating and transforming themselves. Rather than remaining still, his figures mobilise themselves into their futures, raucous and uncontained by physical boundaries, economic barriers, or legal structures and attendant gatekeepers meant to prohibit their existence and maintain them out of sight. We watch as they step into unfamiliar worlds, finding their own place in this brave, and sometimes compromised new freedom. We see them reading the iconography of power, finding ways to access formidable structures, shaping their public identities and personas in order to ease their way into structures that were previously shut off to them. But we also understand that they are not slavish imitators or simple mimics. Whilst Ndzube’s characters may analyse the new worlds in which they find themselves, identifying conventions and discerning what is acceptable, they also riotously flout the usual rules of projecting power, class, and arrival.

Ndzube’s work is characterised by his use of multiplicitous materials, artistic techniques, and stylistic choices – including painting, collage and assemblage – reflecting the equally multiplicitous and contentious socio-political landscape of South Africa. The performative stages and figures he assembles are created out of roadside construction site material and castoff clothing – thrown-away objects that the “nobility” of South Africa have discarded. His fantastical leaps of imagination and practicality mirror the techniques common to the bricoleur; like the figures in his carnivalesque processionals, he welds together both home grown and borrowed aesthetic principles, philosophies, and cultural theories. Through these bricoleurs’ bodies, Ndzube reflects on the ways in which South Africans struggle to face the impact of colonial and apartheid history on their fragmented families and communities, and how they attempt to heal the woundedness of their present. In employing a range of objects or ideas, Ndzube shows us that necessity forces him – and his performing figures – to appropriate and cast objects in new roles, subverting their intended and original social roles by giving them new meaning and uses. Through improvisation and tinkering, they make the most of what is available, despite the limitations of their material circumstances. Disjointed as their persons, bodies, and psyches may be, he – and his figures – attempt to fashion futures of their own making in the dystopian fringes of discarded-urban landscapes.

The bodies that Ndzube fashions are covered by clothing from a past that we would sooner leave behind. This clothing – once fashionable and current – was quickly discarded by those who initially invested in them and wore them to decorate and conceal their bodies. Today, they have become charity shop suits that students might gleefully try on for a costume party. But the garish, paisley patterned double-breasted coats, the moss-green velvet blazers, the wine-coloured suits, multi-hued ties, and the gentleman’s hats – still cocky as they were in a bygone era – are clothing that the ordinary poor of South Africa wear everyday; it is the clothing that they treasure for their Friday night out and iron for their Sunday best.

Despite all their careful attempts at costuming – using discarded suits and ties, gentlemanly hats and polished slip-on shoes – the figures peopling Ndzube’s landscapes mirror the precarity of their present situations. The clothing is ill-fitting on the new wearers, and their bodies and historical baggage spill out of these constraining costumes designed for others. At times, the men’s limbs and bodies are positioned perilously – as if they are on a drunken walk, or if they are falling backwards from a precipice – tripped up by history, by impossible circumstances that prevent them from moving forwards to secure futures. They are laden with beer-bellies, and growths that mushroom out of hips, shoulders and backs, spilling out from beneath the hems of jackets and suit coats. Sometimes the figures carry unwieldy cloth laundry bags, stuffed to the brim, on their shoulders. At other times, these lumpy bags take the place of a male figure’s head.

Ndzube often accessorises his “men” with vintage ties – skinny ones from the ’60s, and broad shouldered ones from the ’70s. Sometimes, he stuffs these ties and twists them into cobra-like shapes. These “snakes,” enchanted and animated by vibrations, respond to the same music that moblises his human figures. But though they appear charming and comical, they also signal the venom and danger carried by the moving figures. Once they have been animated, and once they have come out of their restrictive containers, they may not act as the snake charmer – and his audiences – wish for them to. We fear them, yet find ourselves mesmerised by the thrill of watching their movements. These contradictory elements – the playful and the carnivalesque, as well as the hints of danger inherent in the uncontrollable and self-mobilised bodies of the Other – mirror the desires and fears surrounding freedom in South Africa.

In a similar vein, in repurposing orange plastic cones from construction sites – functional, ubiquitous objects around which we typically navigate – Ndzube creates unease by the simple act of defamiliarisation. In his landscapes, the cones we are so used to seeing at road-works are not simply markers of danger or hazard. Instead, here, their function is doubled – they are megaphones or vuvuzelas, broadcasting a different message. They sound out a joyful – if sometimes ear-splitting and irritating – noise. Ndzube reminds us that the freedom we craved will come with elements we may resent and even fear. It may organise interventions on our ordered and lawns, and disrupt our quiet. And whether the bearers of the megaphones are welcomed and embraced, or regarded as intruders in locations that would rather keep them out, they will assert their arrival.

Simphiwe Ndzube grew up in a community called Masiphumelele. It is situated between the picturesque surfing villages of Kommetjie, Capri Village and Noorhoek – each of which was reserved exclusively for whites, and still remains that way, owing to economic conditions and social exclusion. Initially known as Site 5, the township was renamed Masiphumelele – “we will succeed” – by its residents. Site 5’s purpose was to serve as a “spillage area” for the growing population of Khayelitsha – the sprawling township outside Cape Town designated for black South Africans during the Group Areas Acts, laws that  were designed to completely segregate South Africa’s urban centres. Masiphumelele’s residents were never meant to be mobile; their purpose was to be removed from sight; the most they could hope to do – if they were lucky enough to find employment as a cleaner – was to be in the service of maintaining the “prettiness” of the surfing villages. But Masiphumelele’s residents did not remain still; it has been the site of numerous protests against existing conditions – lack of access to basic sanitation and healthcare, and failures by the present government to deliver housing projects as promised.

The artist has often said that it is important that his work is relevant and accessible to the people from communities like his own, that it is reflective of the political, intellectual, and geographical journeys they have attempted to make, despite inheriting conditions meant to lock them away from even dreaming of escape. Ndzube’s work is especially relevant in this season of university student protests – when young men and women who, over the past two years, have insistently placed their bodies at risk in order to demand the right to an accessible education, as well as living wages for those labourers and cleaners without whose daily presence the well-ordered lawns and buildings of universities would not function –. His work reminds us that the labouring bodies of South Africa’s invisible – the domestic labourer, the construction worker, the urban and rural unemployed – have dreams for themselves and their children. And to bring those dreams to fruition, they have come to life. Although these are the bodies around which South Africa has mostly steered around, in Ndzube’s carnivals, they challenge the order of things, turning the world upside-down. They announce themselves to the world – no longer content with being invisible, quiet, functional objects. Today, they are animated, with voices that will jar you out of easy complicity with privilege.

Laden though they may be by history and circumstance, disenfranchised by the memories of evictions, forced migrations, as well as the inevitable addictions that came with those ruptures in their lives, Ndzube’s figures still aspire to forge futures worth dreaming about. On the performative stages that he creates, men high step and shimmy confidently, moving to rhythms only they can hear. They slip-slide into a world that once almost succeeded in erasing their existence – through illegalising their bodies through the Group Areas Acts, Pass Laws, and everyday brutality – using their repurposed hazard cones to broadcast, “I, too, am here! See me, South Africa! See me, World!” The world they call out to may wish to remove them from memory, to relegate their experiences, history, and present to a shameful chapter. Yet their dynamic excesses, and their present-ness that wills them into the current landscape of South Africa will not allow that erasure. Having survived a past not of their making, still uncomfortable in and restricted by the borders and boundaries that do not fit their needs, the inhabitants of Ndzube’s landscapes stride proudly into the present.

Click here to see the exhibition selected as one of the Critic’s Picks: Cape Town on Art Forum.