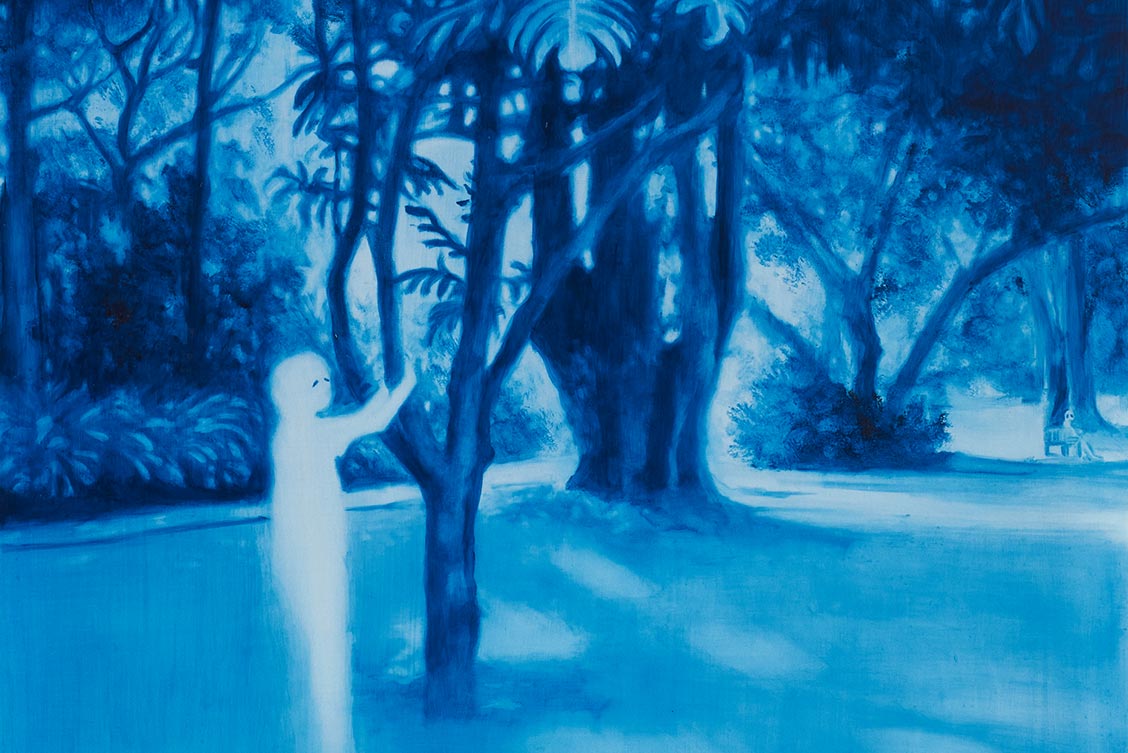 Ruby Swinney (b. 1992) is a painter who works primarily with oil on silk and oil on tracing paper. She uses vibrant monochromatic colour to find form, employing painting as a medium not only for image-making but also world-making. Her work transcends into a parallel world where strangely obscured and distorted figures inhabit timeless landscapes. These surreal and immersive recreations of natural environments depict the precariousness of human existence within these. In doing so, Swinney’s paintings evoke our present uncertainties and our yearning for a vanishing natural world that is growing darker and more unfamiliar.

Swinney’s ecological concerns conjure this subtle gesture. By representing nature as an eerie dreamscape, she brings the viewer’s awareness to our increasing alienation from natural worlds, and the dangers of an implied distance between a constructed ‘human world’ and the vast unpredictability of ‘the natural’. By depicting these supernatural alternatives, widely painted from photographs which in themselves are enhancements of reality, Swinney comments on the absurdity of this distinction.

The translucency and incandescent beauty of her paintings transport the viewer to a place somewhere between the spiritual and earthly realm. She does this by making reference to religious iconography such as the crucifixion cross, glowing haloes, altarpieces compositions, depictions of ascension, and planes of existence.

Her points of interest extend into human behaviours, forms of consciousness, digital realities and the philosophy of art.

Since graduating from the Michaelis School of Fine Arts in 2015, Swinney has hosted two solo exhibitions with WHATIFTHEWORLD: Hold Still in 2019 and Ignis Fatuus in 2017. In 2021, Swinney opened her first international solo exhibition, The Distance Between Us, with AKINCI Gallery, Amsterdam.  She has also held her solo exhibition Human Nature at Zeitz MOCAA, in Cape Town. In 2017, Swinney completed the C’e La Luna Residency, The ECMA, Cinema Mele, Pizzo Calabro, Italy.