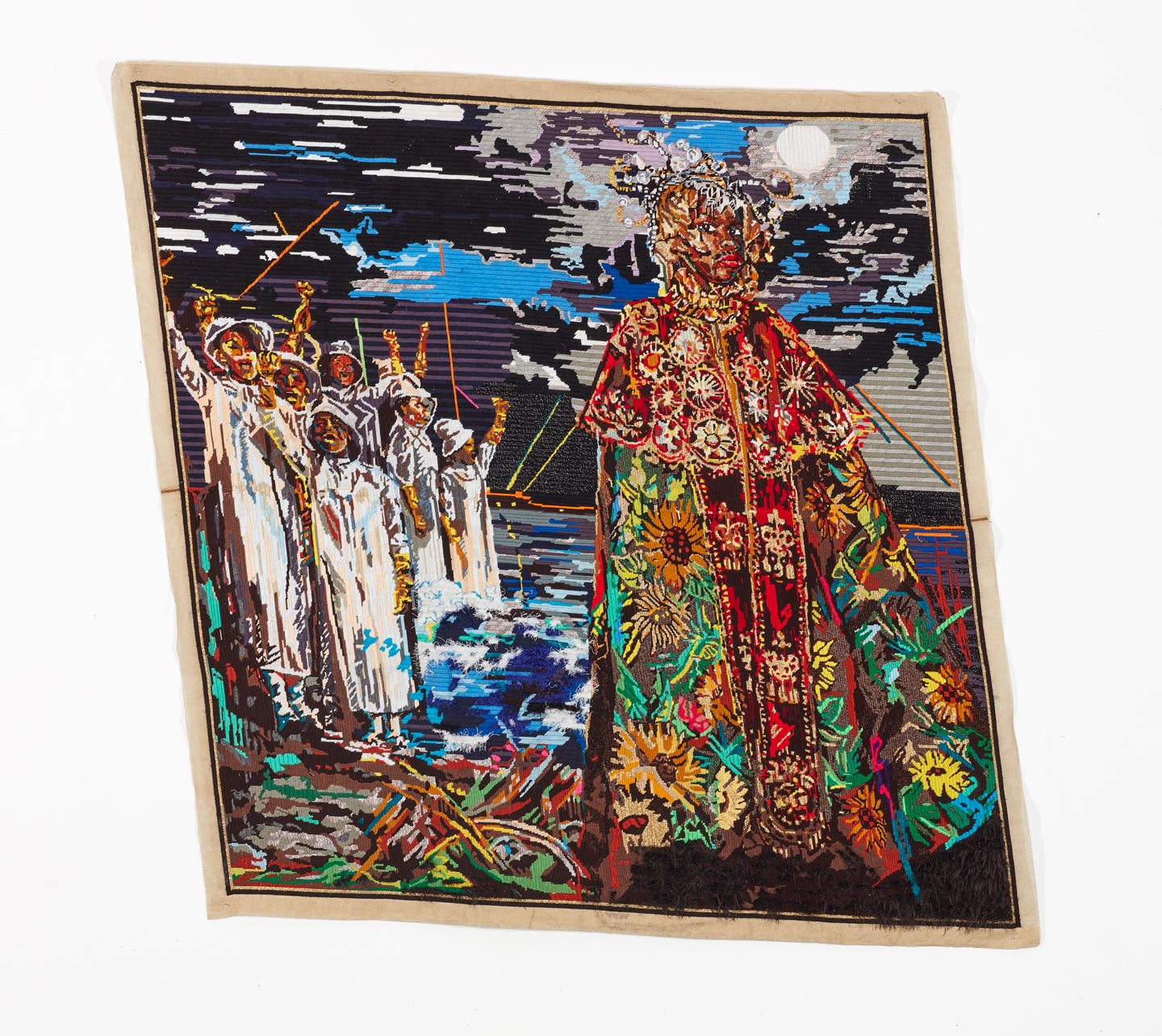 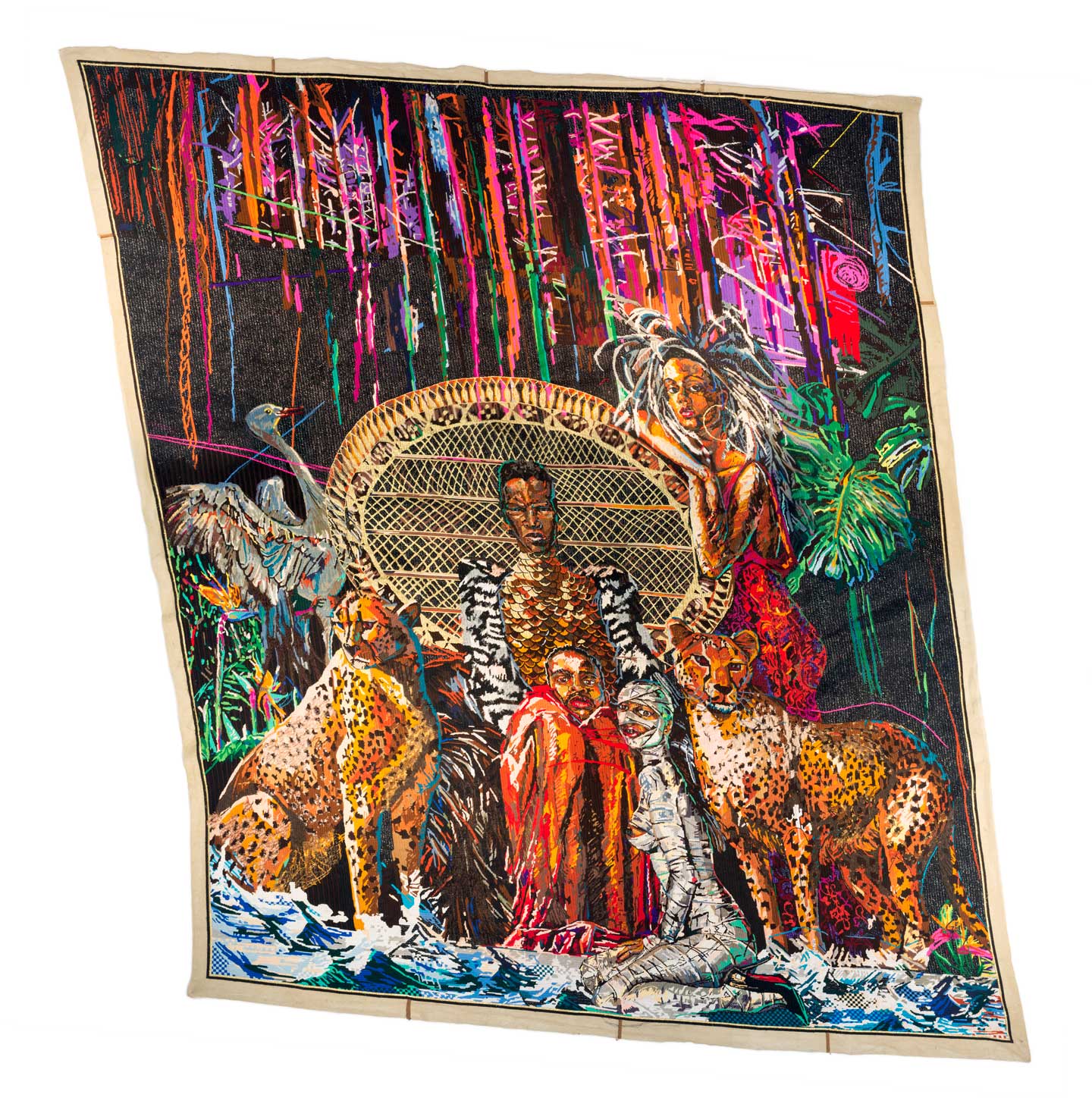 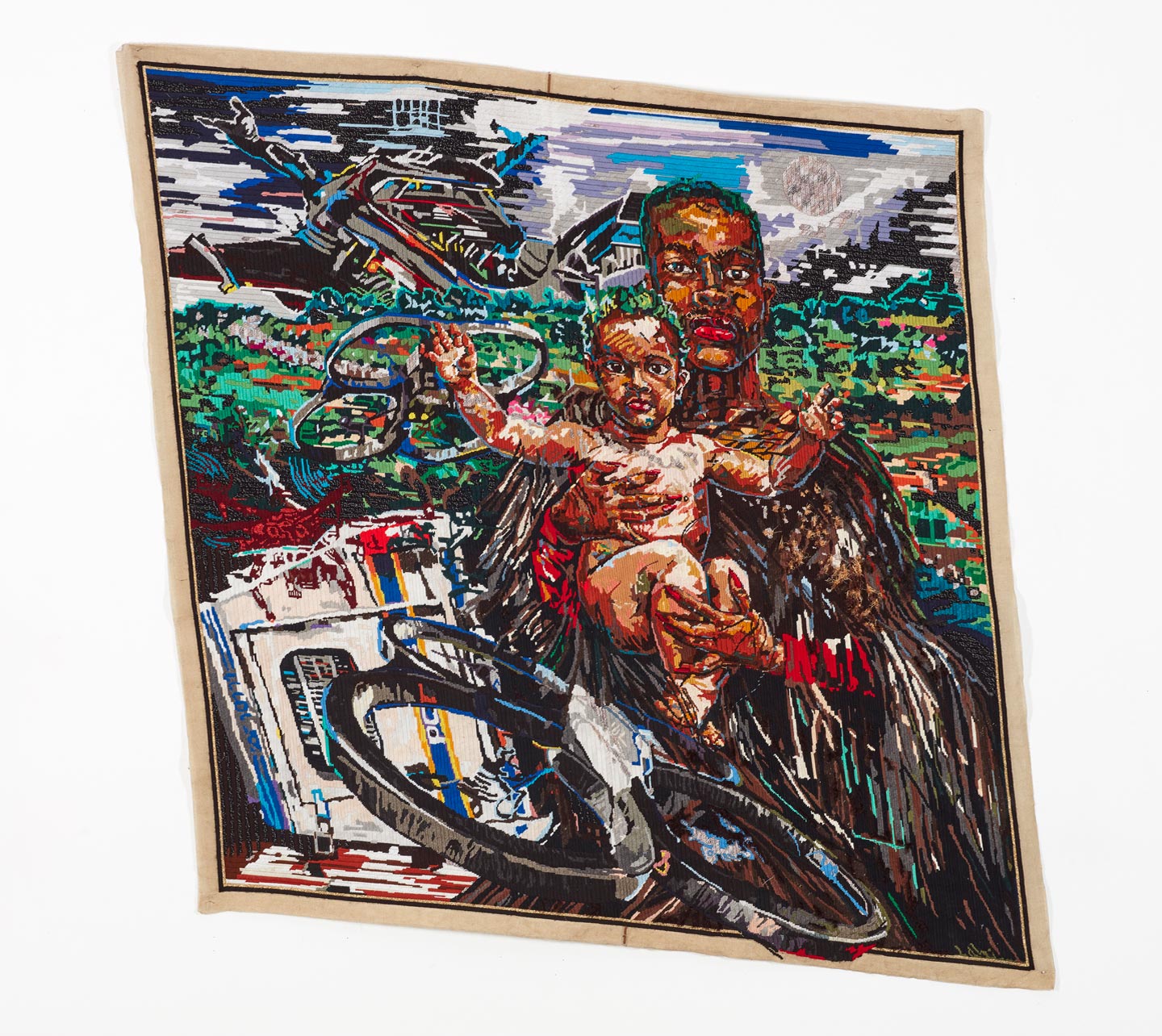 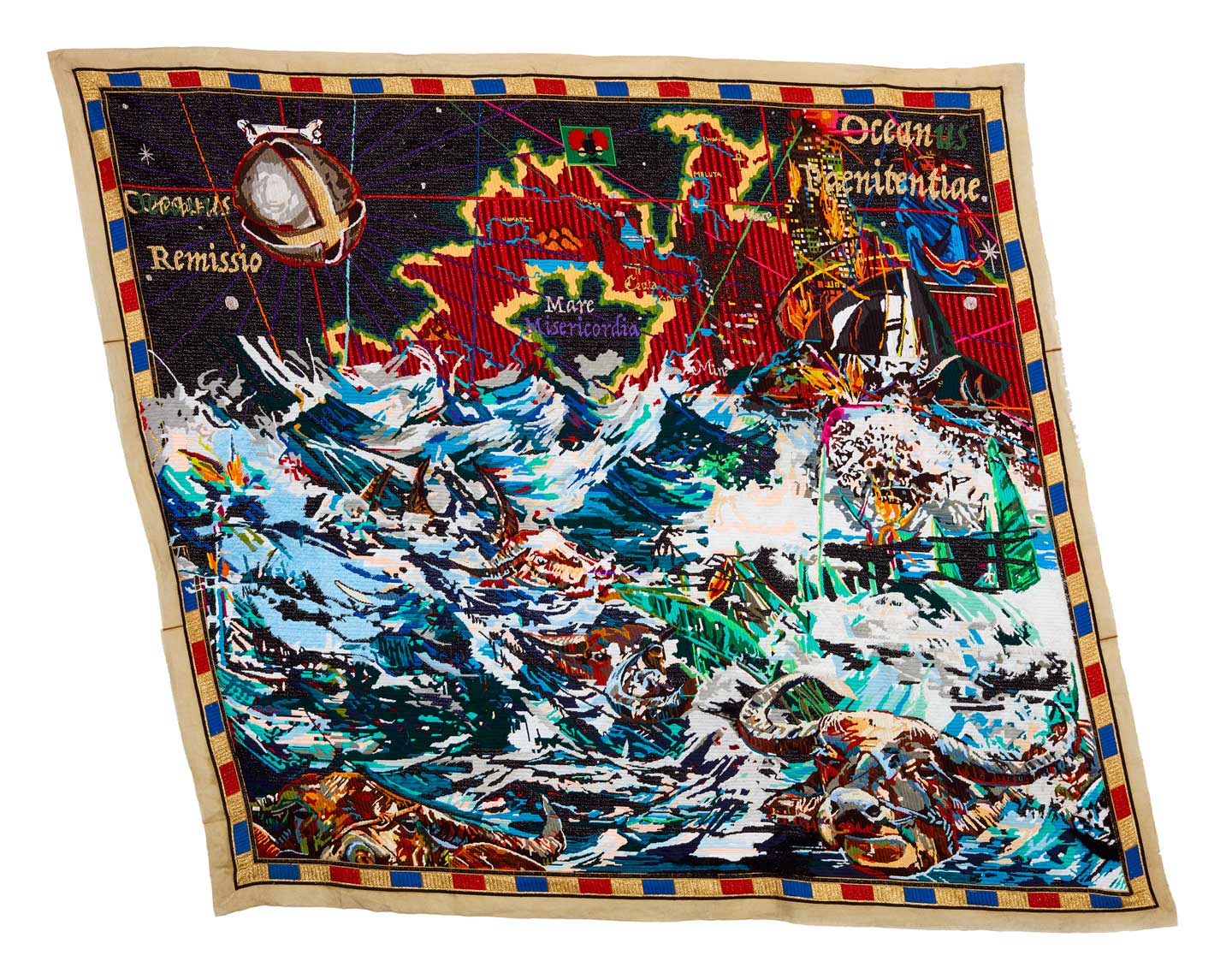 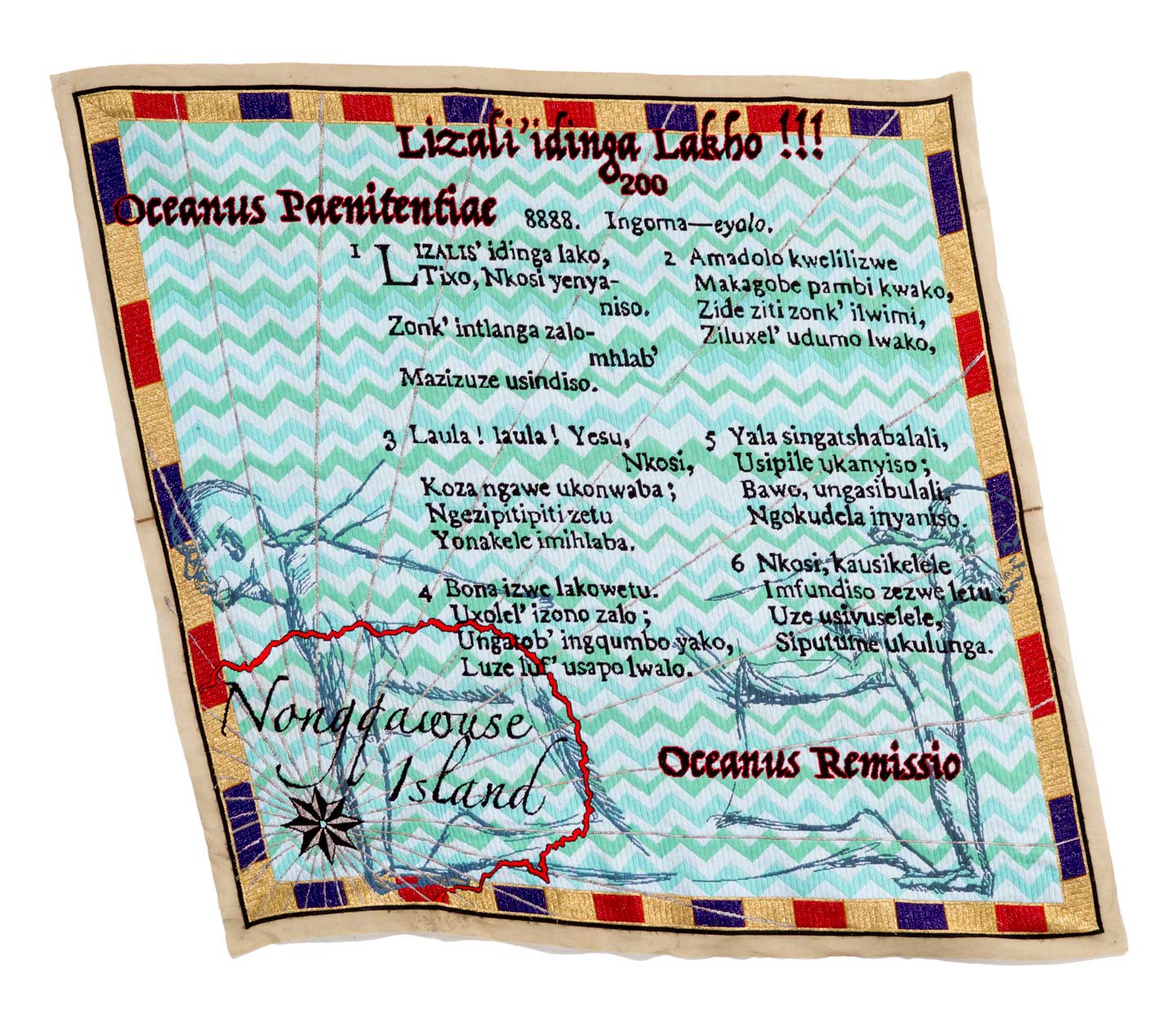 A Land Without a People, For a People Without a Land (The Return) 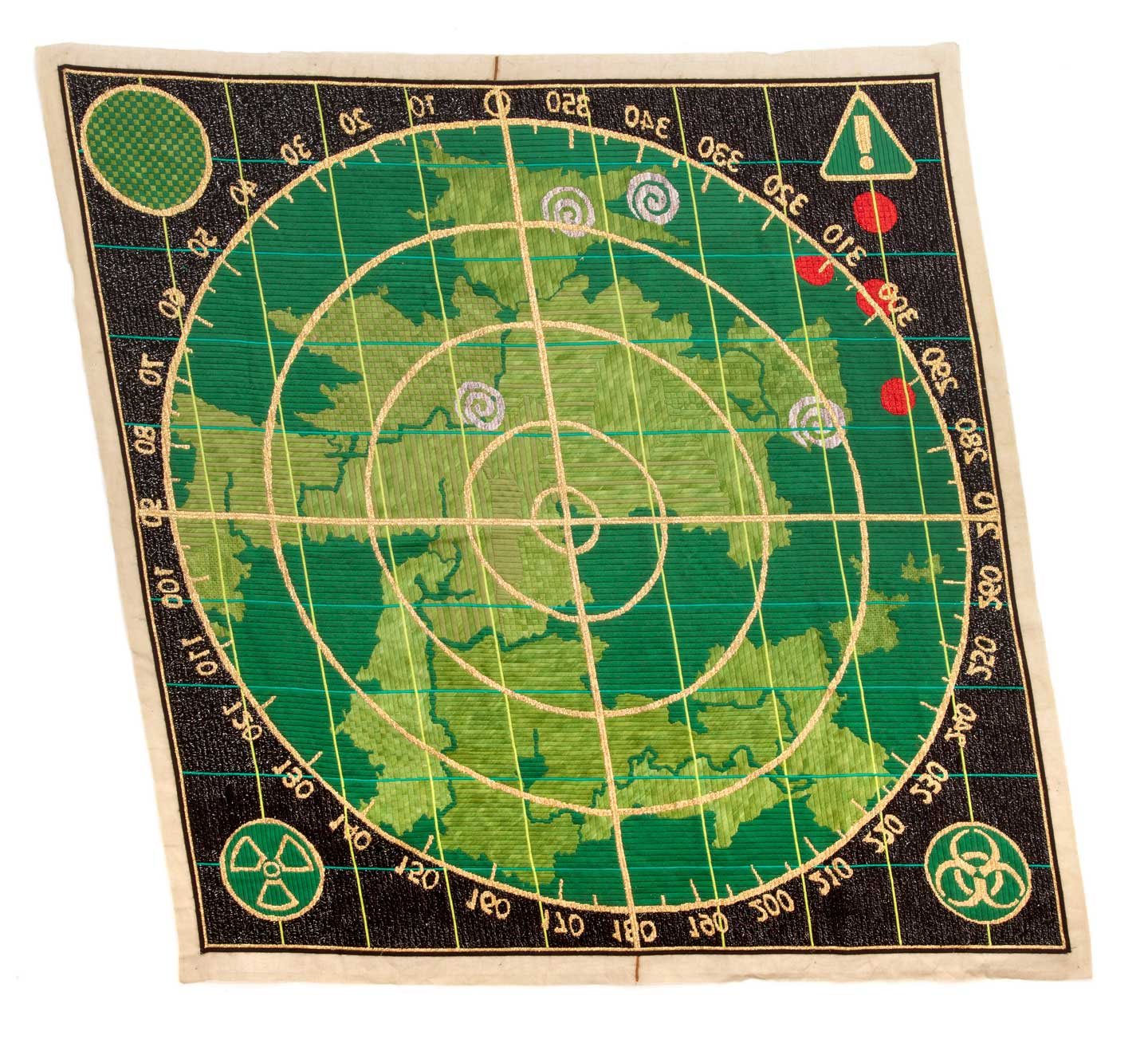 The Nylon Lion of Judah 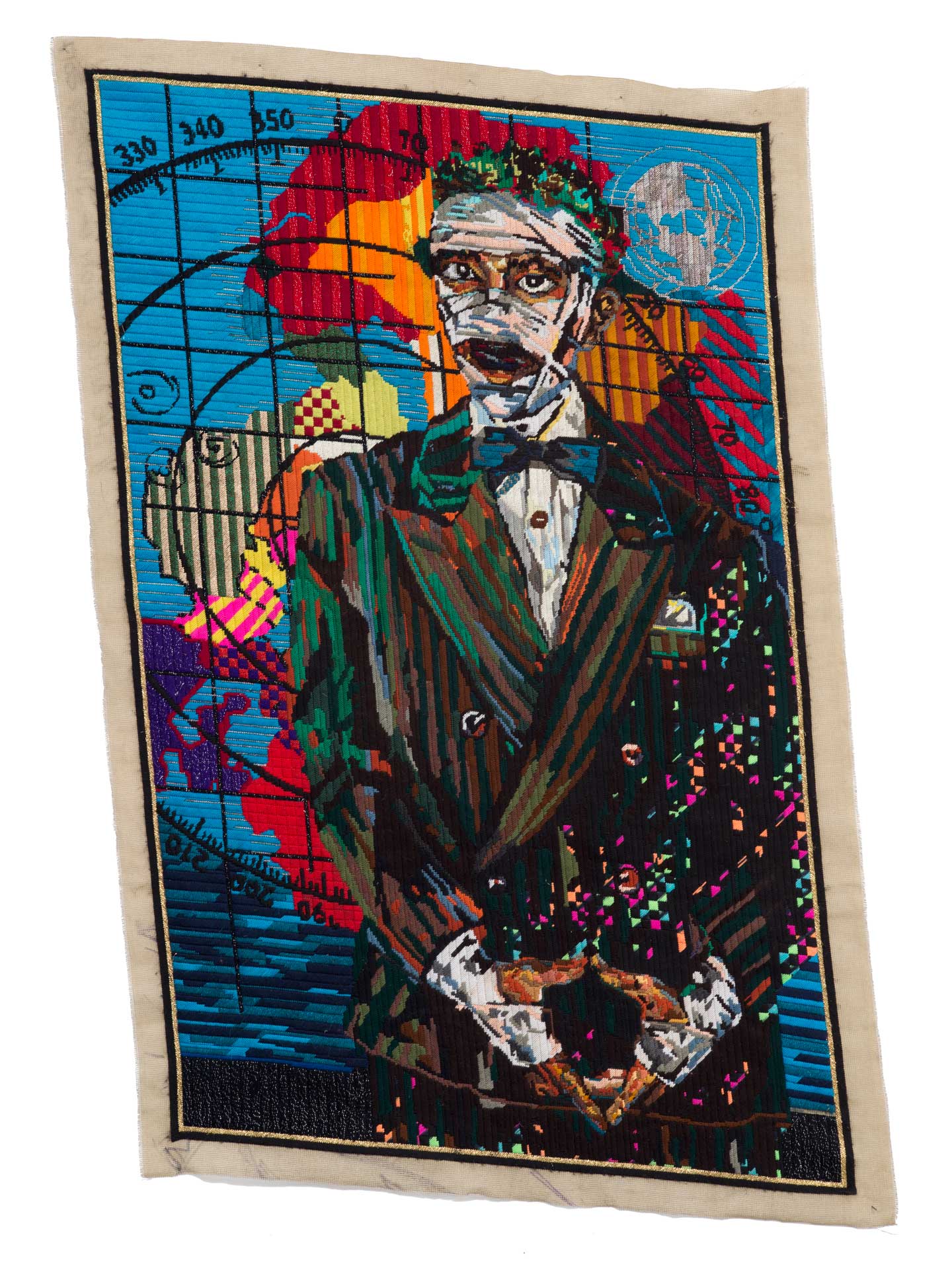 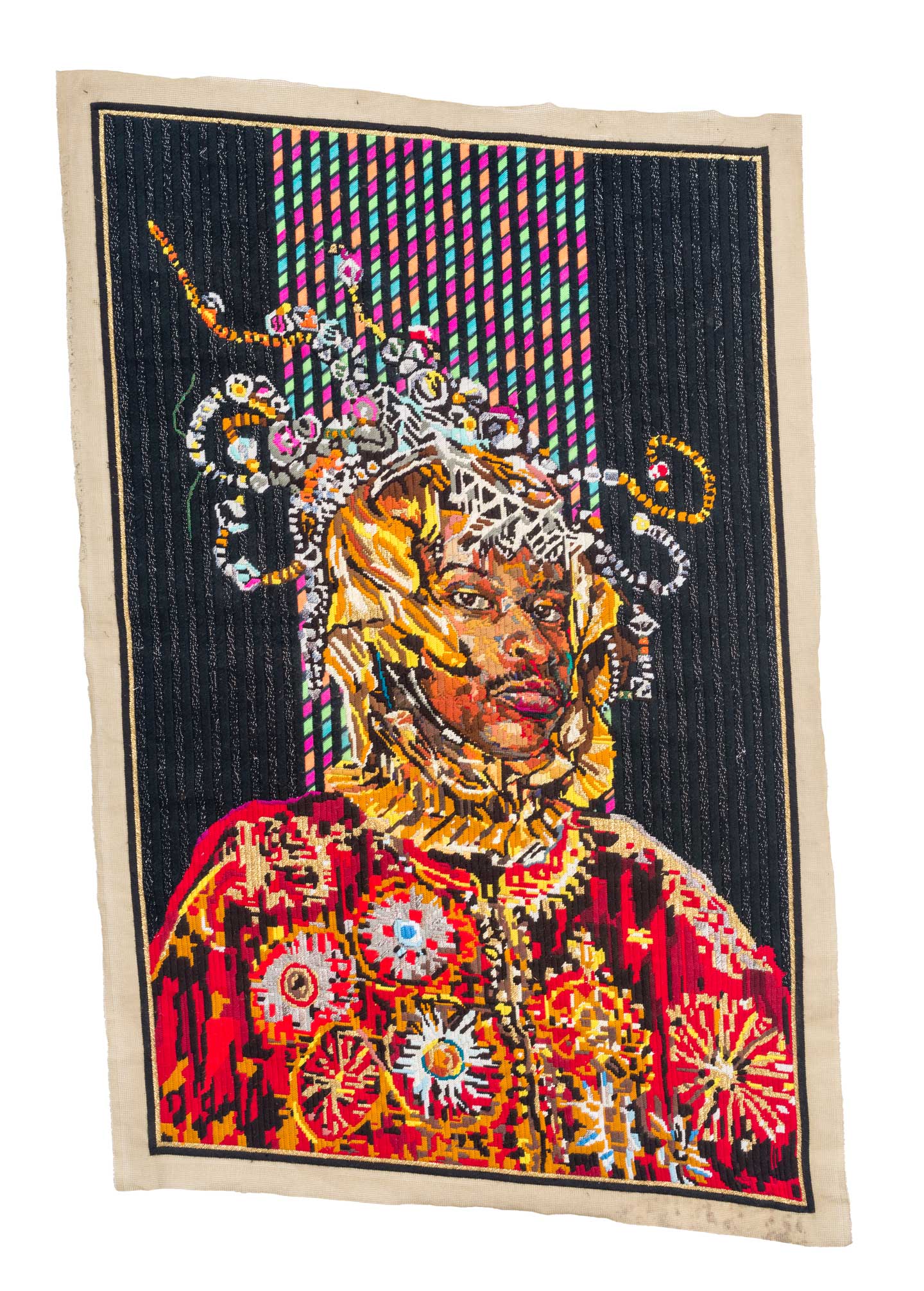 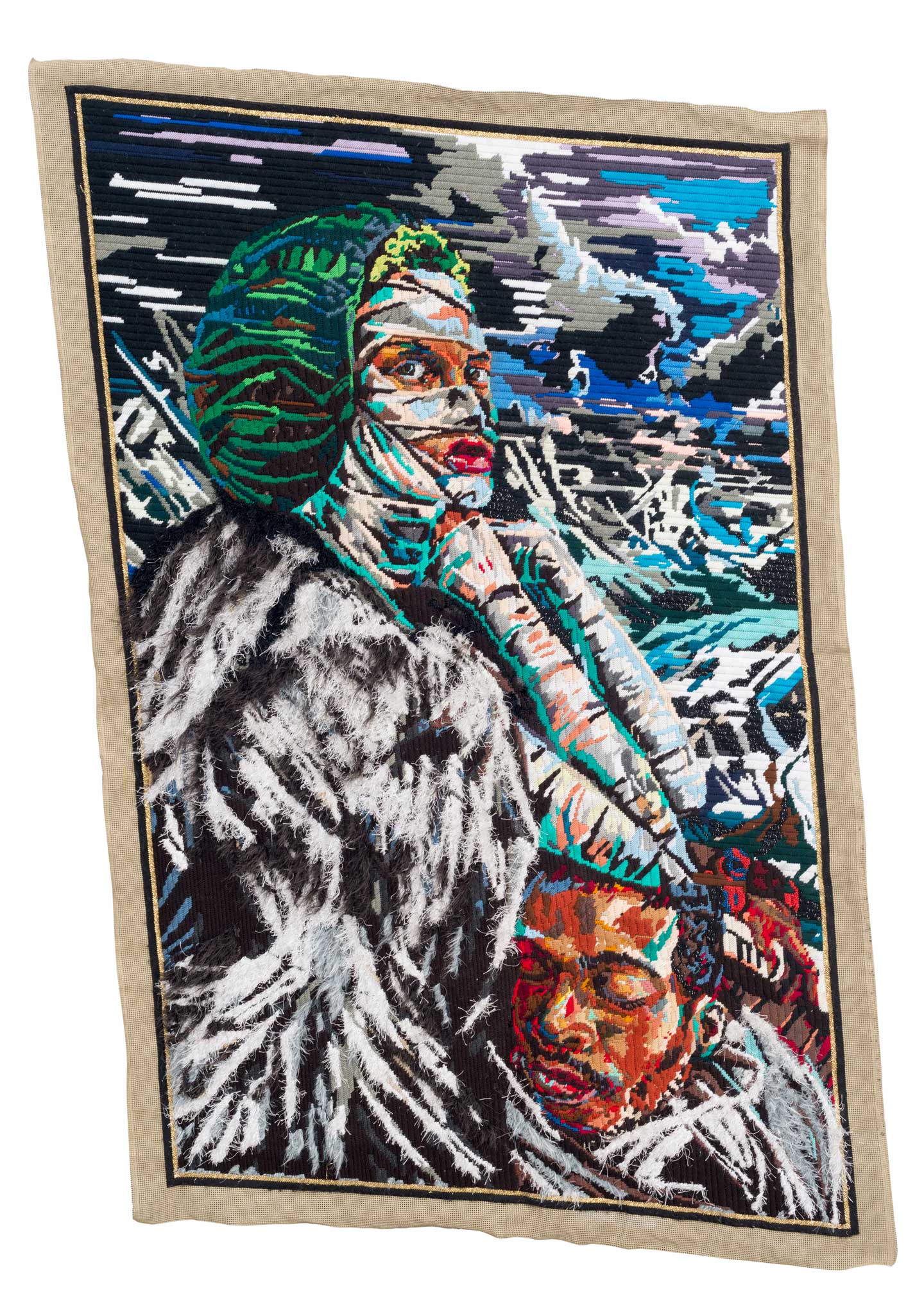 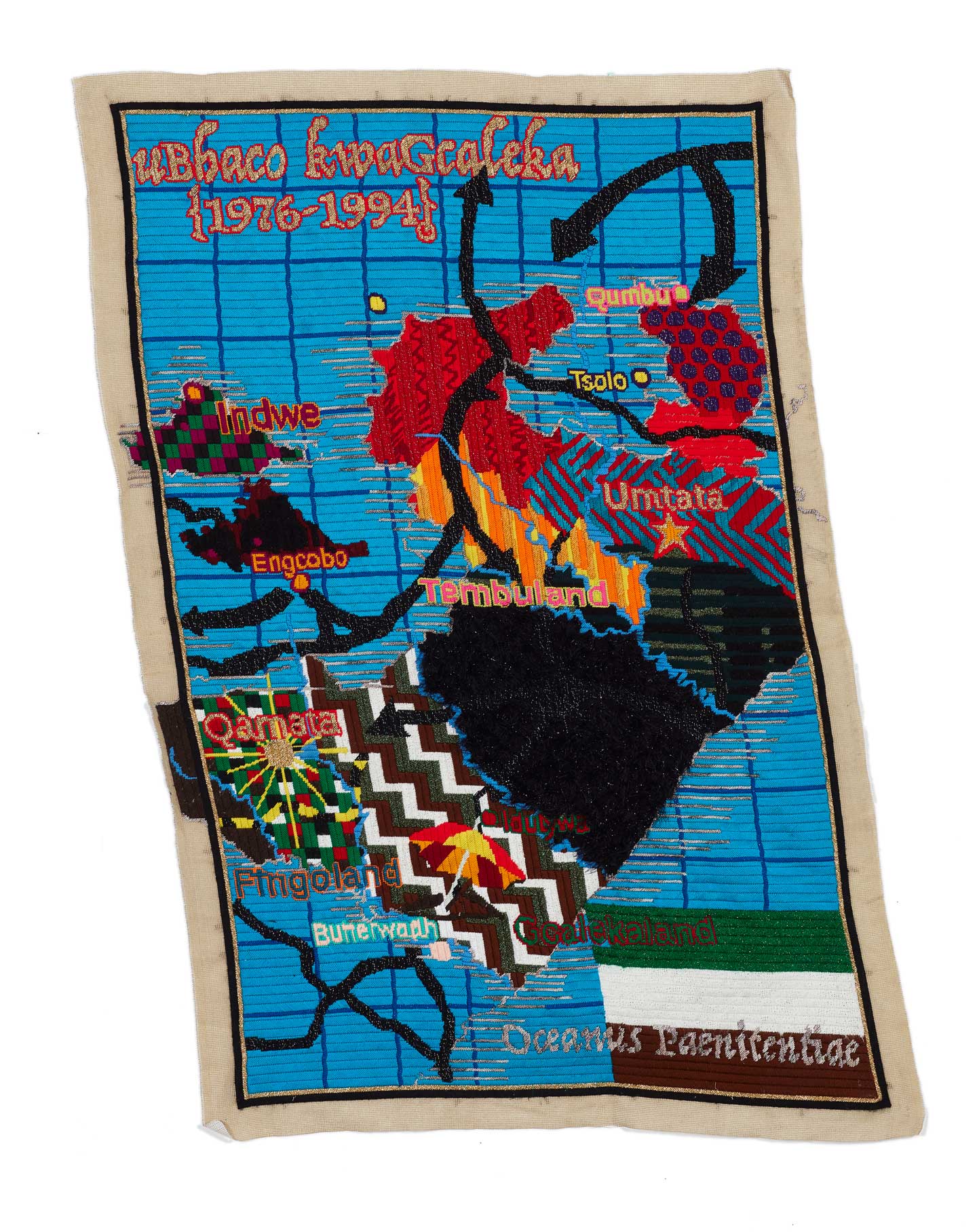 The Glamouring of a Versatile Queen 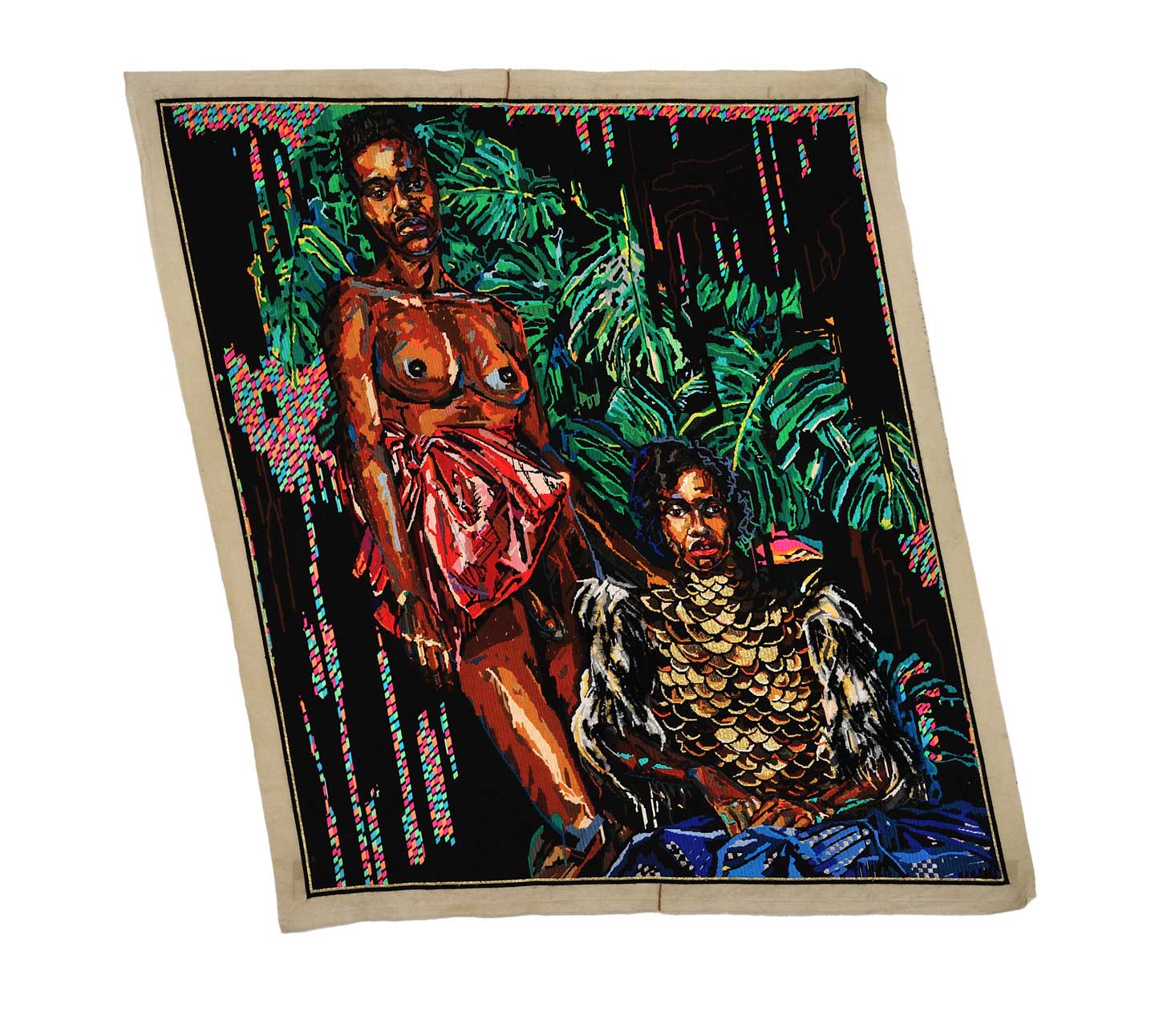 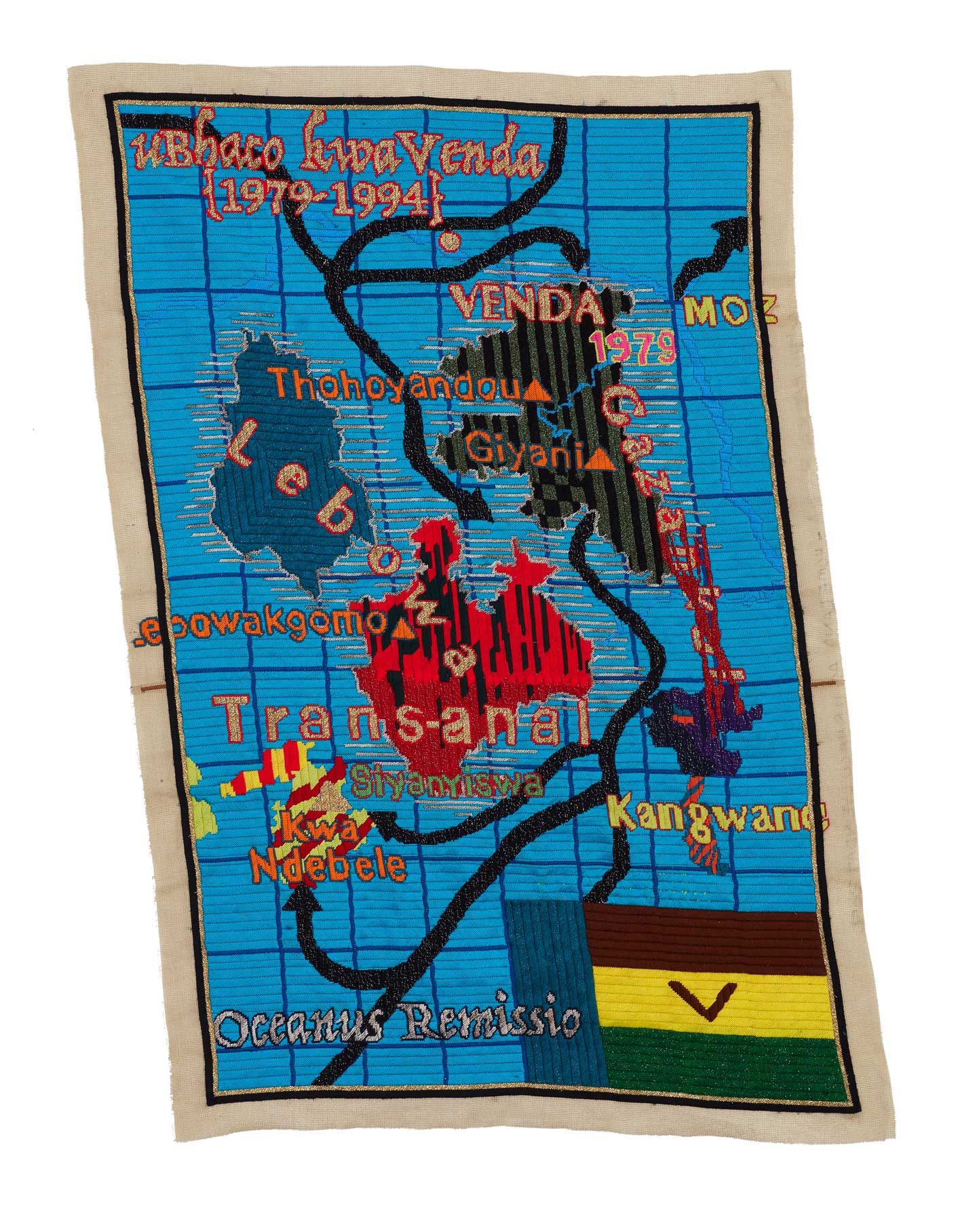 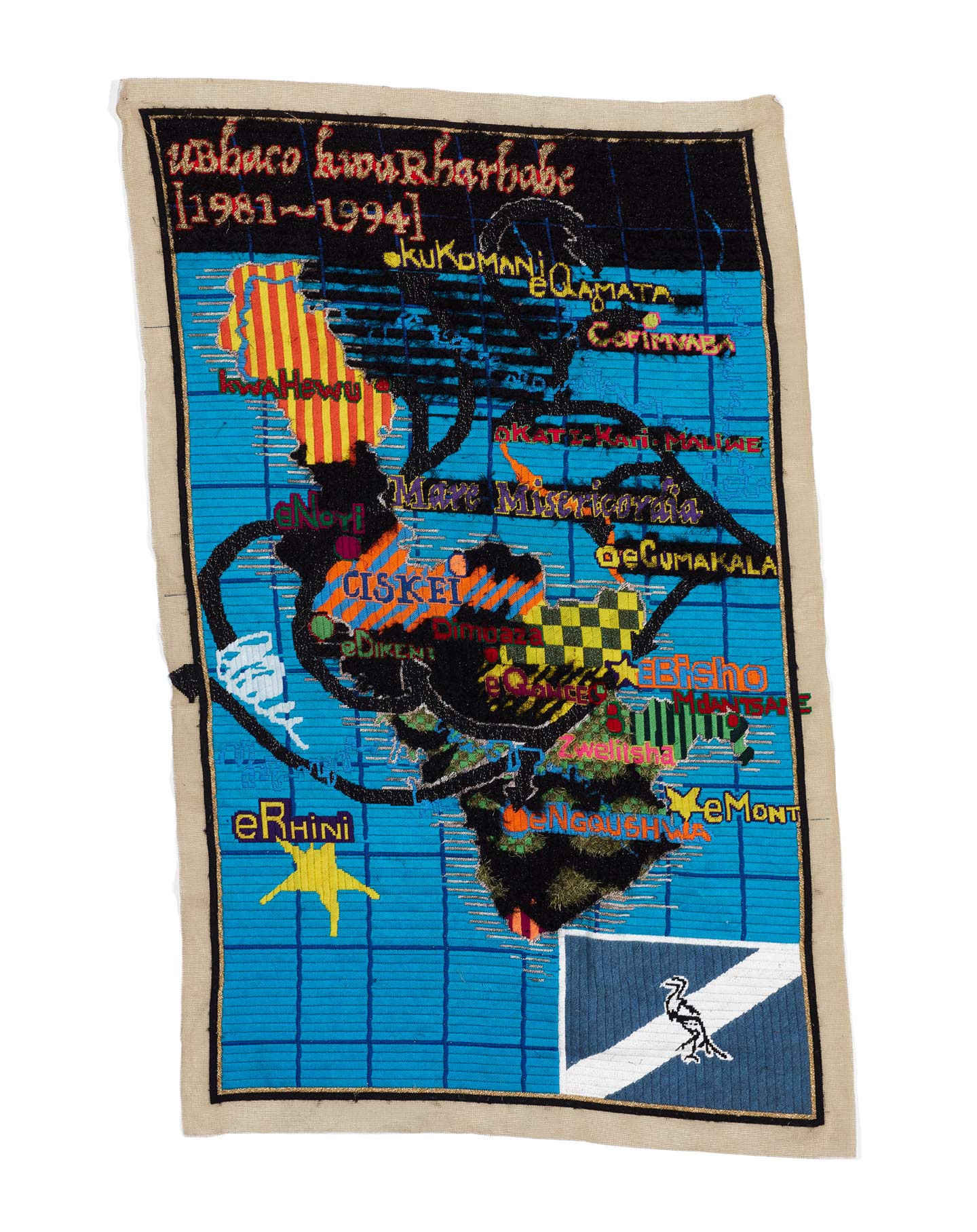 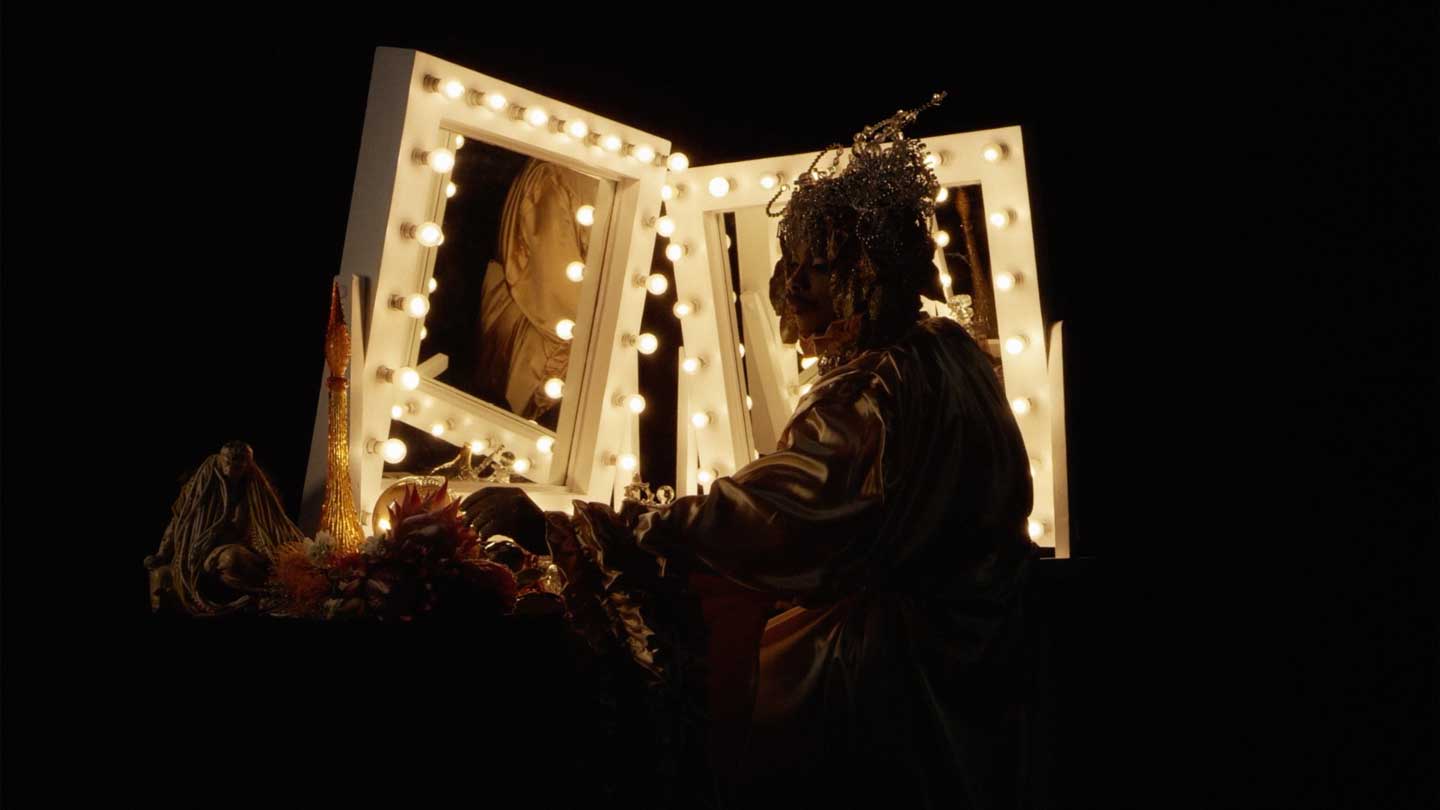 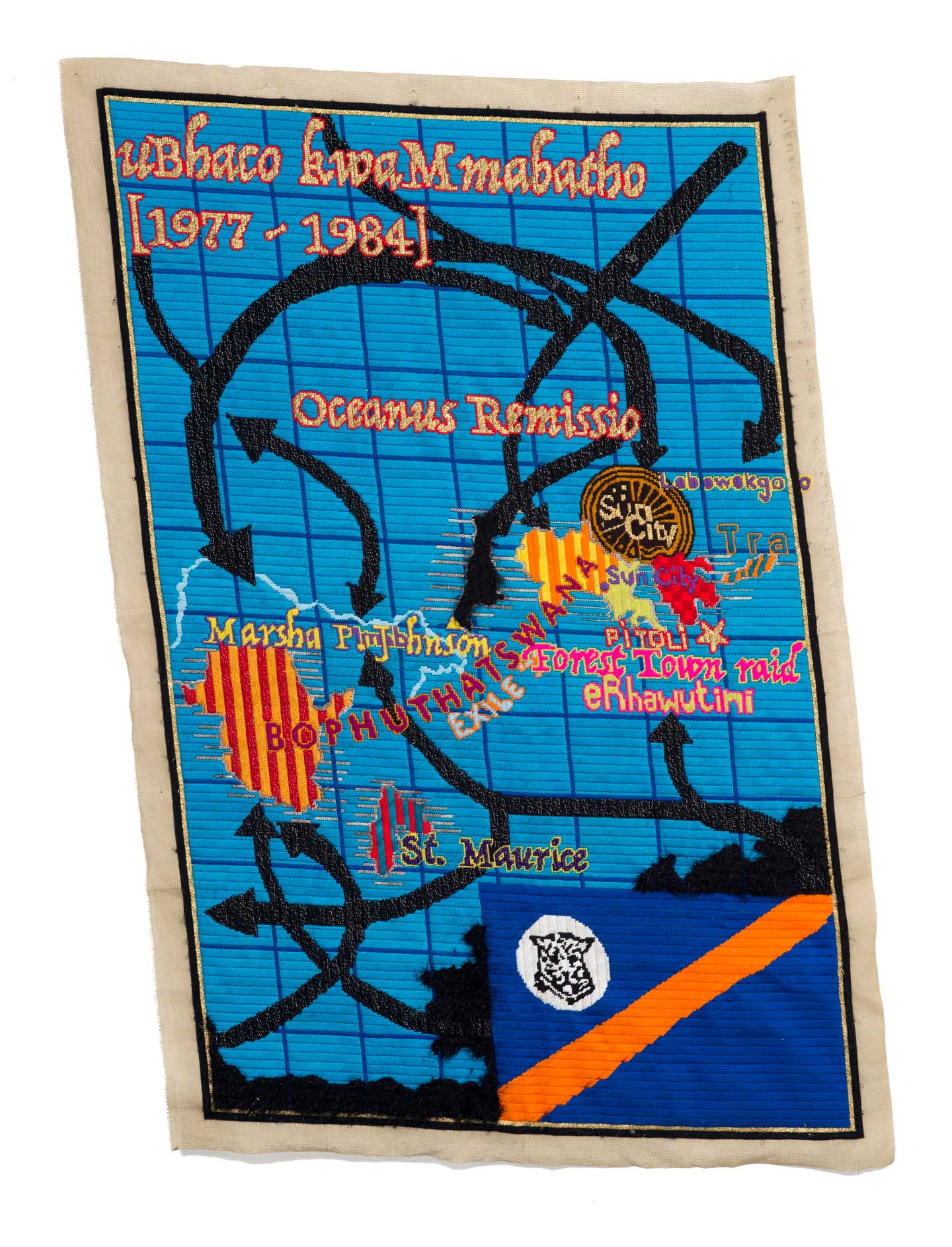 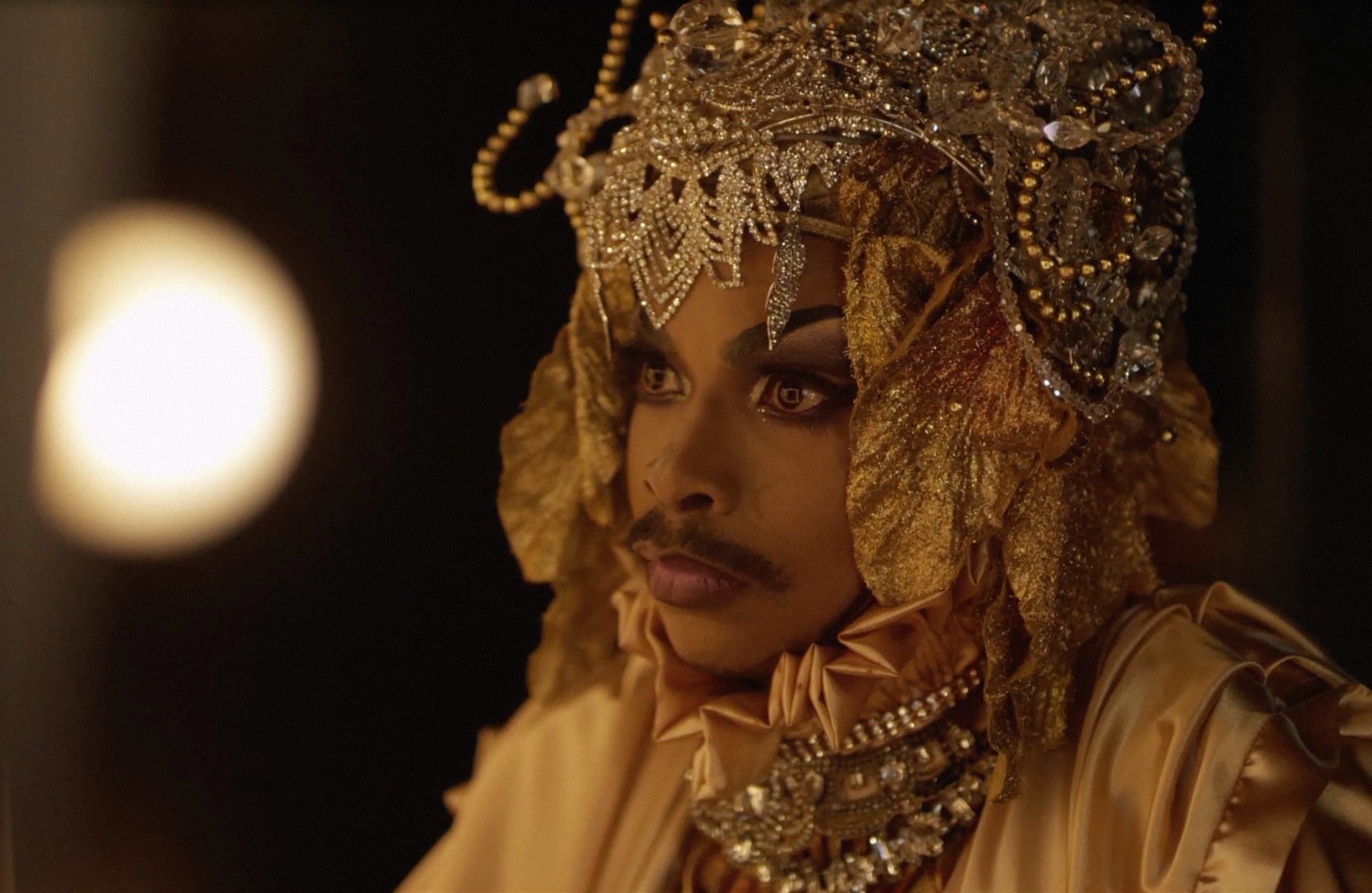 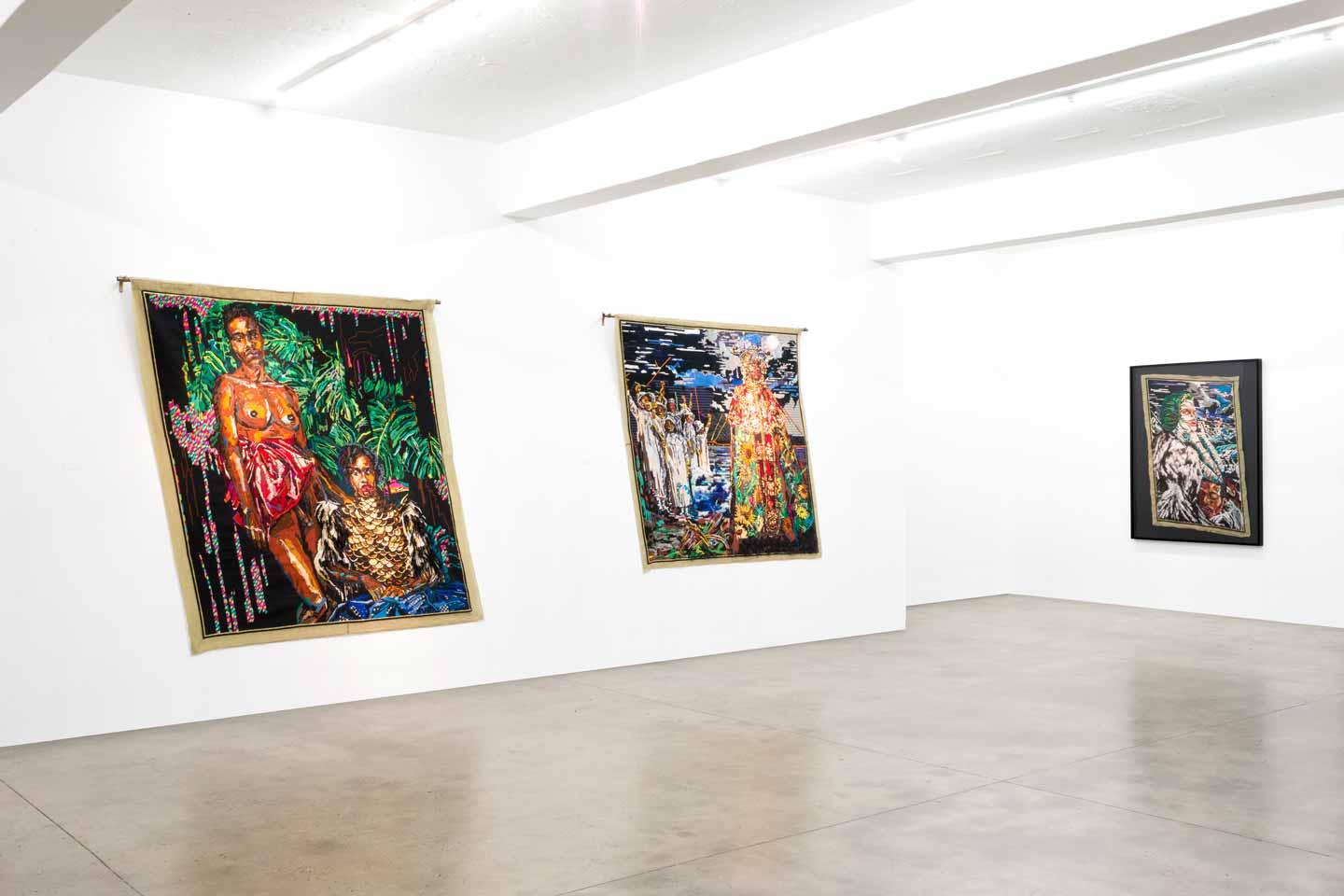 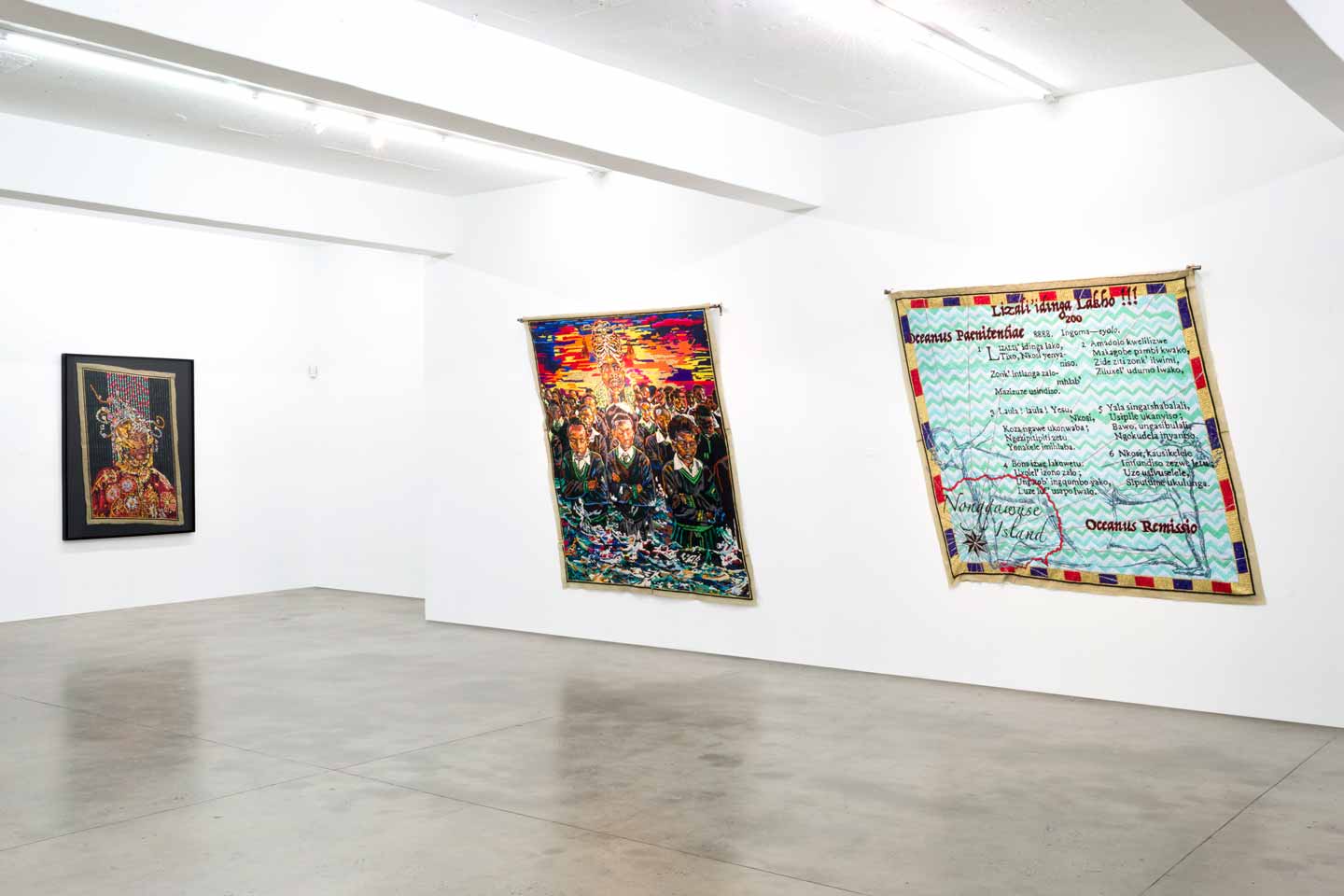 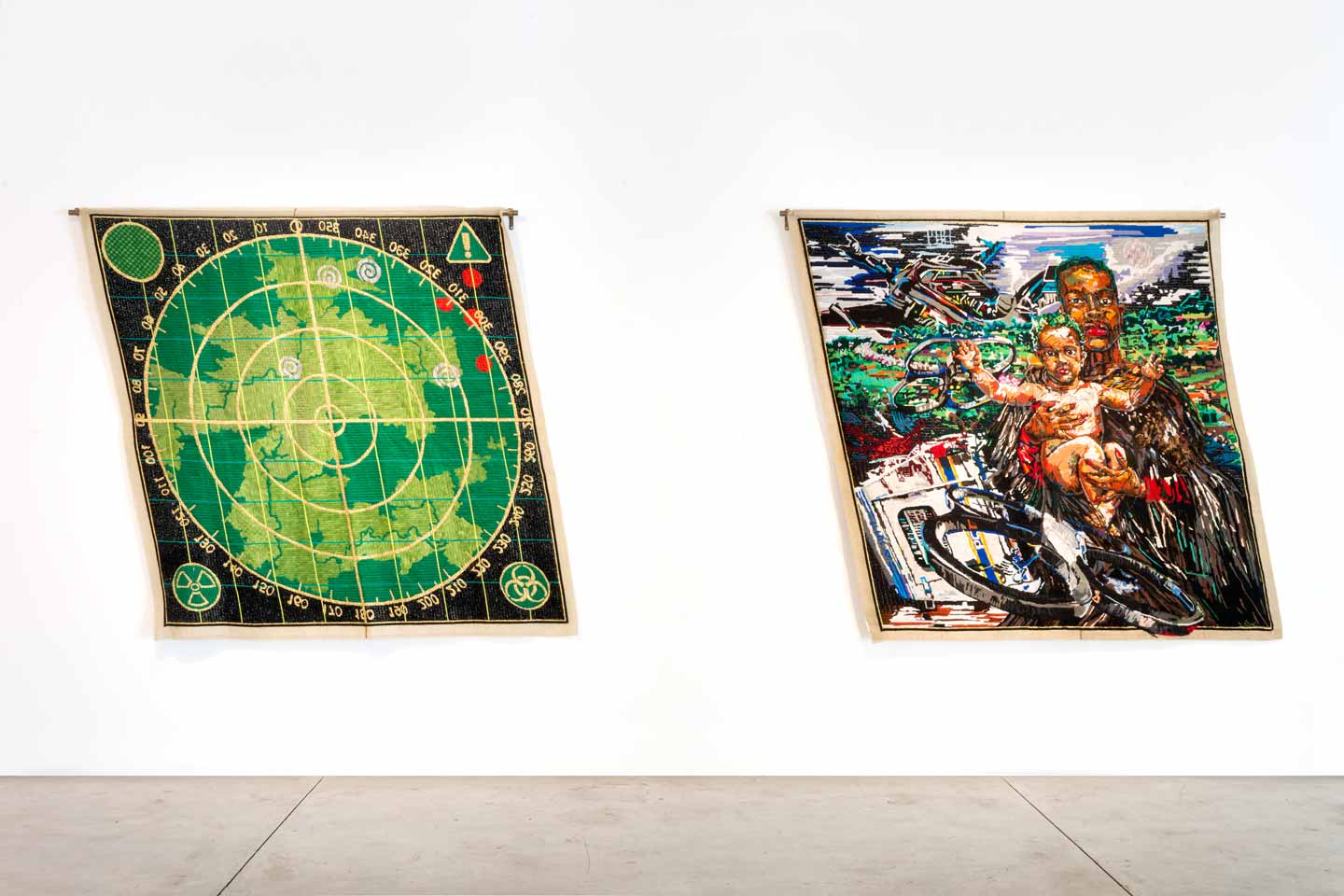 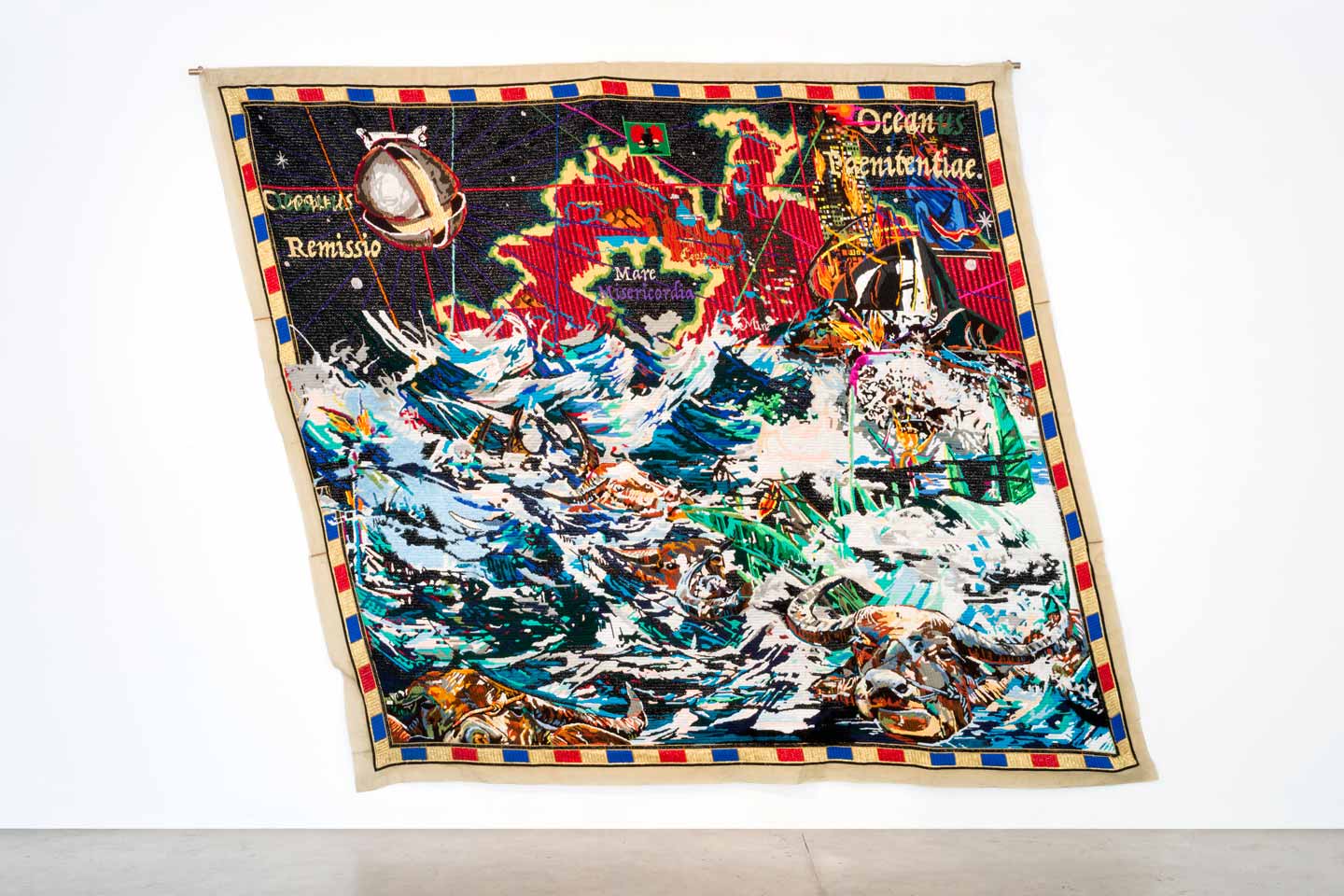 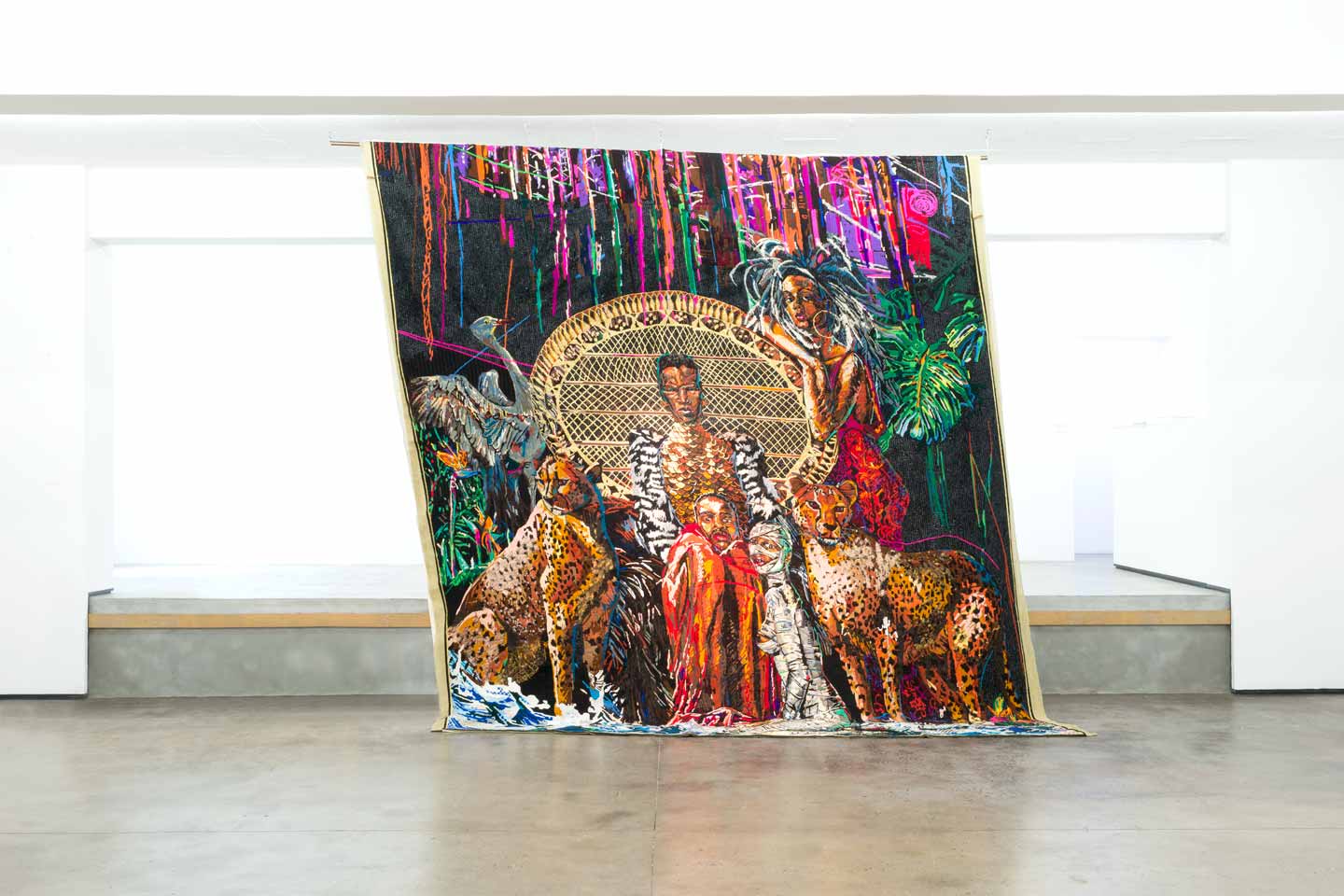 WHATIFTHEWORLD is pleased to present Queens in Exile –  a major solo exhibition of new work by Athi-Patra Ruga.

Queens in Exile is about telling better stories. This isn’t simply a revisionist exercise, patching up inconvenient holes in the historical record. Instead, Ruga excavates collective memory and exclusionary national myth to rebuild both in wholly new shapes – to make a world where the exiled can reign. The result is a land of many queens, lost and found and forgotten.

The culmination  of a three year long project and a continuation of his critically acclaimed exhibition The Future White Woman of Azania Saga in 2014, Ruga presents the viewer with a ambitious and immersive exhibition over three floors including Over the Rainbow a large scale film projection that can best be described as an electrifying experience. The bulk of the exhibition is made up of exquisitely hand embroidered petit point tapestries which unequivocally proclaim Ruga as a master of his chosen medium.

Returning from an extended run at the Foundation Louis Vuitton in Paris, South African audiences should not miss this opportunity to see an internationally acclaimed artist at the height of his powers.

The philosophical allure and allegorical value of utopia has been central to Ruga’s practice. His construction of a mythical metaverse populated by characters which he has created and depicted in his work have allowed Ruga to create an interesting space of self reflexivity in which political, cultural and social systems can be critiqued and parodied.
Ruga has used his utopia as a lens to process the fraught history of a colonial past, to critique the present and propose a possible humanist vision for the future.

Recent exhibitions and performances include: Art Afrique, Louis Vuitton Foundation, Paris; Over the Rainbow, Performa 17, New York; Women’s Work, IZIKO South African National Gallery, Cape Town; An Age of Our Own Making, Holbaek, Denmark; Queer Threads: Crafting Identity and Community, Boston Centre for the Arts, Boston; AFRICA: Architecture, Culture and Identity at the Louisiana Museum of Modern Art; Imaginary Fact at the South African Pavilion, 55th Venice Biennale; African Odysseys at The Brass Artscape in Brussels; Public Intimacy at the SFMOMA, San Francisco; The Film Will Always Be You: South African Artists on Screen at the Tate Modern in London; and Making Africa at the Guggenheim Museum Bilbao.

Athi-Patra Ruga was also included in the Phaidon book ‘Younger Than Jesus’, a directory of over 500 of the world’s best artists under the age of 33. He has collaborated with Dover Street Market Beijing, ABSOLUT bottle,musicians The BLKJKS, Spoek Mathambo and Angel-Ho. And was inducted in the prestigious 21ICONS list in 2015.

Read an article on Athi-Patra Ruga in the Mail & Guardian Friday.

Click here to read the exhibition review in the March issue of ArtForum.