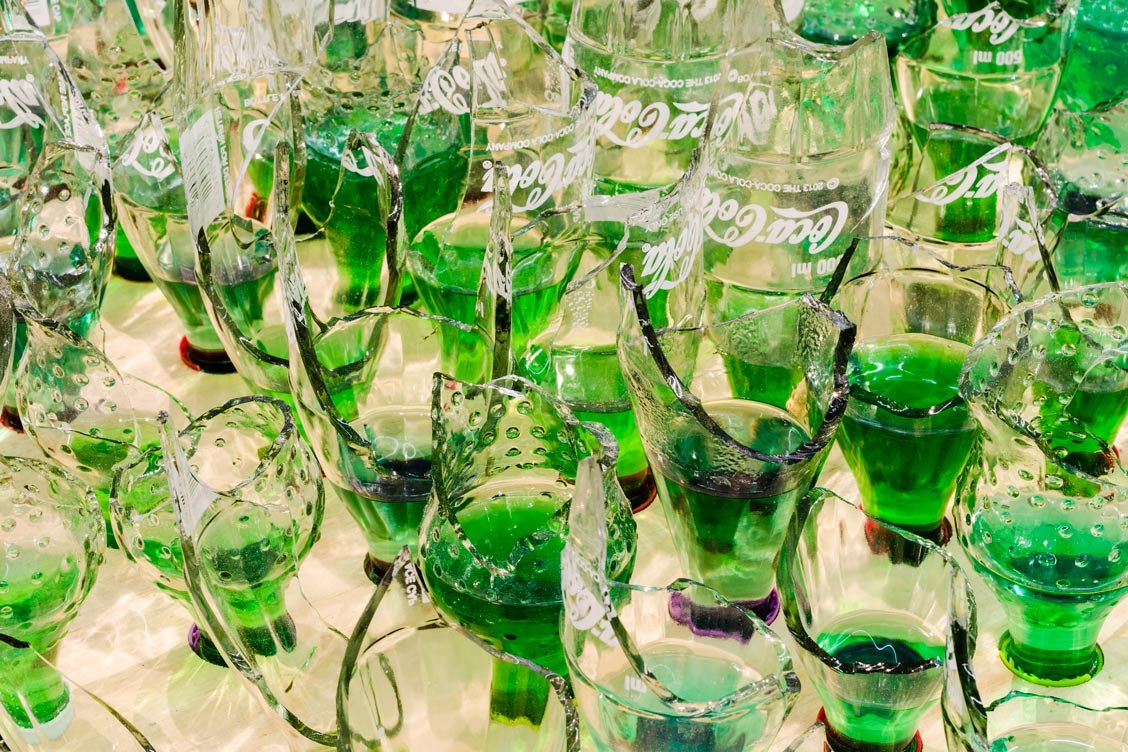 Through her work Lungiswa Gqunta grapples with the complexities of the South African post-colonial cultural and political landscape. Focusing on creating multisensory experiences that attempt to articulate the social imbalances that persist as a legacy of both patriarchal dominance and colonialism, Gqunta exposes different forms of violence and the systemic inequality in South Africa.

Informed by her upbringing in a shebeen household in the suburb of New Brighton, Port Elizabeth, South Africa, Gqunta is no stranger to the economic legacy of the apartheid regime. Issues of inequality, gender violence and substance abuse as cultivated through the South African Dop system, are all subjects that come under Gqunta’s scrutiny. Working primarily with found materials; empty beer bottles, petrol, torn bed sheets and worn wooden bed frames Gqunta’s work confronts the viewer with a series of uncomfortable negotiations. Between masculine and feminine, the revolutionary and the oppressed and the haves and the have-not’s, her work unflinchingly cuts through idealized notions of domestic space, enclaves of privilege and political apathy. Despite the conceptual shifts in the materials that Gqunta uses, her media of choice: broken glass, razor wire and concrete, are all ubiquitous to an urban township landscape and Gqunta utilizes these emotionally loaded materials to great effect, so that both the potential threat of violence and its aftermath are deftly balanced in her work.

Lungiswa Gqunta (b.1990) is a visual artist working in performance, printmaking, sculpture and installation. Gqunta is currently in residence at the Rijksakademie van beeldende kunsten in Amsterdam. She has also obtained her undergraduate degree at the Nelson Mandela Metropolitan University in 2012 and her MFA at the Michaelis School of Fine Arts in Cape Town in 2017. In addition to her independent practice, Gqunta is one of the founding members of iQhiya, with whom she participated in Documenta 14 and Glasgow International.  She has recently participated in the Manifesta 12 Biennal and the 15th Istanbul Biennial and has also been included in the group exhibition, Not a Single Story II at the Wanas Konst Museum in Sweden. She has been actively involved in the South African gallery scene, having exhibited with both the Zeitz Museum of Contemporary African Art and the Johannesburg Art Gallery (JAG), as well as held two solo exhibitions, Qwitha (2018) and Qokobe (2016), with WHATIFTHEWORLD. Her work forms part of the public collections of the Kunsthal Zurich, Nelson Mandela Metropolitan University, The University of Cape Town and Zeitz MOCAA.